Righto... I got tempted to try an ultra-cheapo ebay filter, so thought I'd share my experiences in case others are tempted too!

To set the scene... I'm on a tight budget but I still wanted an external for my 60l Tetra Aqua Art tank. My only experience of externals so far is a Superfish Aqua Pro SP2 which I bought 2 months ago for my rio180. It comes well recommended, and I wasn't let down. It was well built, quiet and easy to deal with. So this made me brave! So brave, that I won an auction for what looked like an Eheim Classic rip-off, for a measly Â£36 delivered.

Now the listing didn't even mention a make, simply 1200l/hr and supplied with full media. I felt that it looked okay and went for it.

This is the stats of what I ended up with;

And this is what turned up; 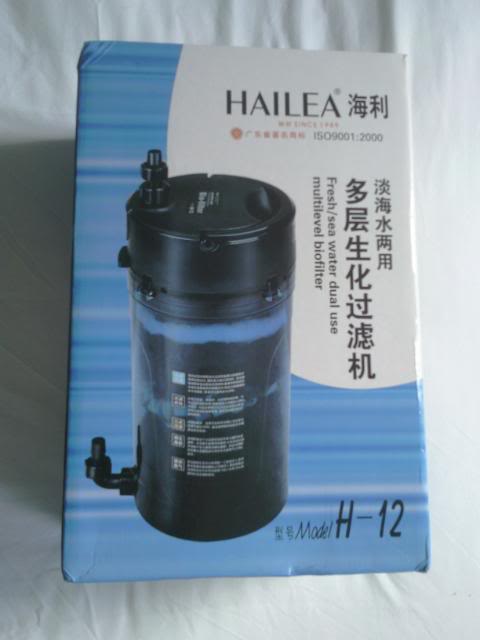 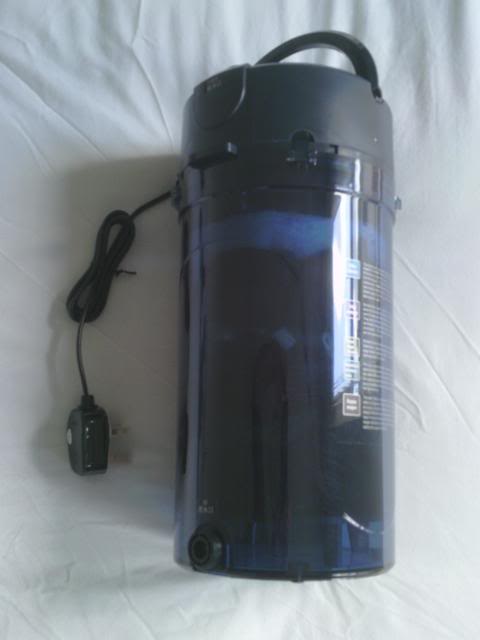 Accessories (and a rogue pet!) 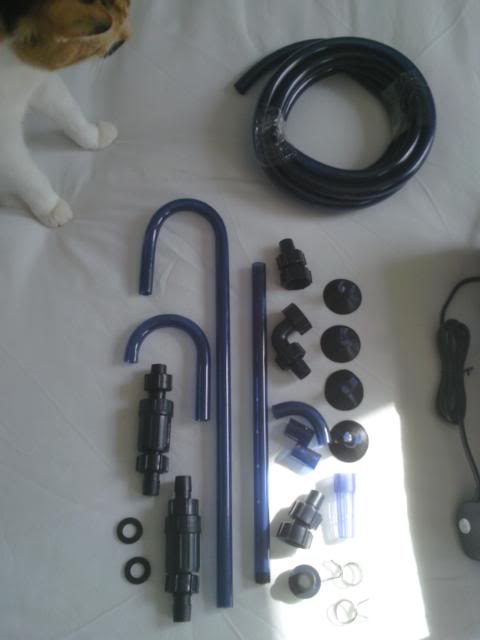 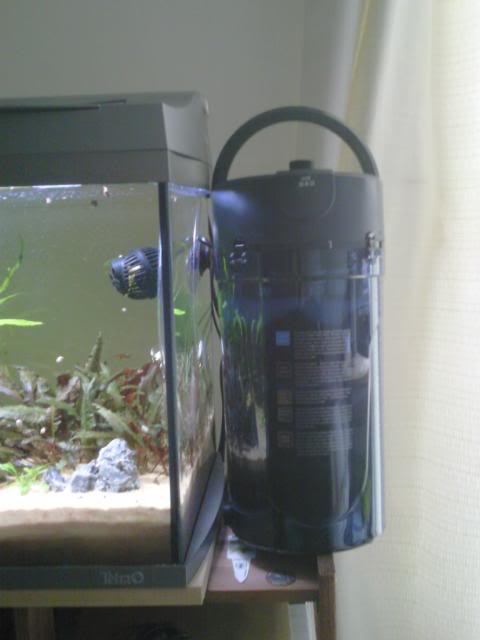 Now, I've obviously dumped the carbon. It was replaced with a pack of Fluval Bio-Max from P@H. I'm going to see how it goes, but I'm really tempted to replace some more media with eheim mechanical and bio media. I have to be patient though, since a full stock of media was one of the deciding factors in buying this, hence keeping the cost down.

Getting access to the cannister is via 4 small metal latches, similar to what I've seen of the eheim classics. A rubber seal then gives a water-tight seal. I was worried the latches looked puny, but the seal is very tight fitting, so leaks there shouldn't be a problem. Now one of latches on my unit were broken in transit â€“ to be more precise, the plastic on the cannister holding the latching pin on. However the latch still held firm when closed so it wasn't worth sending it all back.

This filter comes supplied with 2 quick release taps, consisting of a screw cap on the outside and 2 spring mounted rubber valves on the inside. It takes a little getting used to, but actually works very well in practice with no leakage except the little water caught in between the valves. 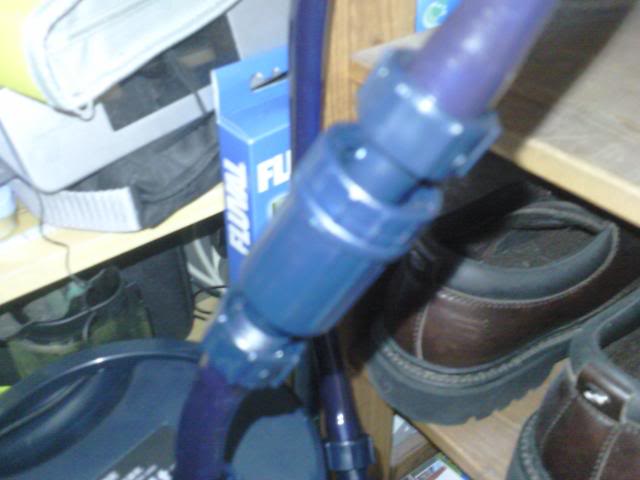 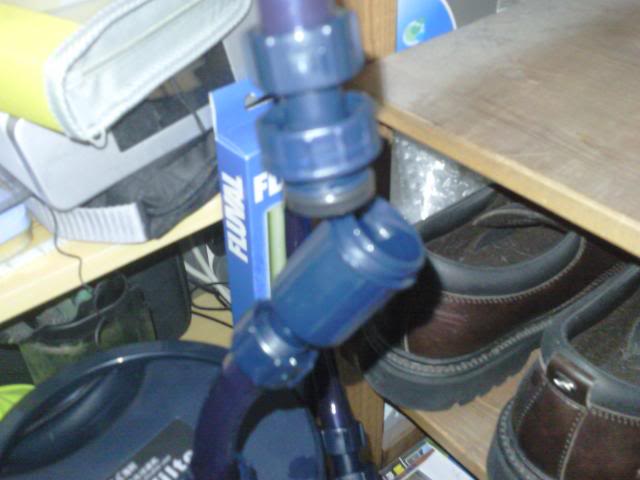 Now its at this point that I managed to break something â€“ the little screw in adapter to which the 90Â° hose connector fits onto at the bottom of the cannister. I managed to over tighten it until it snapped. Thankfully a spare was included, probably for this reason!

Also supplied is silicon hose, plastic spraybar (only x1 30cm section), an intake with strainer, and 4 suction cups. I Didnt measure how much hose was supplied, and it didnt look a lot, but it was enough for me. This is with the filter sitting to the side of the tank and on the floor. If I'd have had a cabinet it would've been plenty.

The plastic pipes are quite basic, and the curves are quite large making it a lot of fun fitting them in the spaces provided in the hood! In the end I had to have the inlet and outlet at different ends of the tank as they wouldnt both fit in the same corner. I did quite like the metal clips to help ensure the silicon pipe doesnt work loose from the plastic pipes. It was a bit of a struggle to fit them but I really doubt they'll work loose. 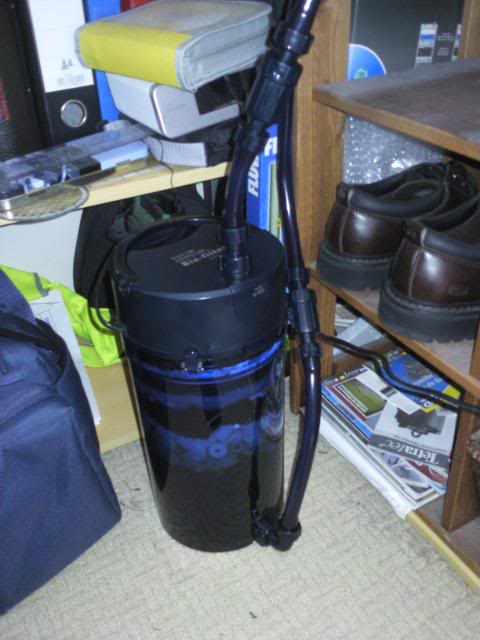 The spraybar is a little lower than I'd have liked, but thats due to the limited room between the tank and the hood. I must note that only one 30cm spray bar is supplied. I thought that was a little mean. Fortunately I had a small off cut of plastic tube from the Aqua Pro, so drilled a few holes and used small pieces of silicon tube to attach it all together.

The filter doesnt self-prime, so filled it with tank water and switched it on (inside a bucket just incase!!). It struggled initially, but worked when I lifted it a foot in the air (oddly enough!).

With the filter running, flow was good but not OTT, with plants gently swaying in the flow even at substrate level. I would say that it works well for a tank this size, but the flow no where near matches the rated figure of 1200l/hr. At an educated guess its probably closer to 600l/hr.

Now I would note that even when all the air had come out of the cannister, it was still noisey. It was beside the tank in my spare bedroom and I could hear it at night in my bedroom. I did try removing half the media, but still the noise. I had a look at the impellor to see if there was any difformities, but it was grand. So with an in-law coming to stay the next day, it had to be shut down.

I had considered swapping it with the Aqua Pro 2 SP, but I doubted the flow would be enough, which is important on the rio. So now its all cleaned up and has been sold on ebay. I have to say I'm really disappointed. If it wasn't for the noise it'd have been an absolute bargain. With this experience in mind, I think I'll stay with the Superfish filters. Just have to save for a 4 SP so the other filter can move to this tank.

So in conclusion (all out of ten);

I bought this with a review in mind, but would have to say I'd most definitely support a filter review sticky. The more information we all have the better!

Nice one, great right up, cheers. Always wondered what the cheapo filters on ebay would be like

As you said, we need to know these things!
Kind regards