After initially having my halfmoon rosetail betta in his own tank and moving him to a peaceful community tank I've decided while he seems happy, he definitely enjoyed being on his own more so this will be tailored to him, plus it satisfies my MTS....

Hardscape made with 5 pieces of manzanita and I used bastel plastik to join them, will all be covered with java fern and moss so the white bits will be hidden 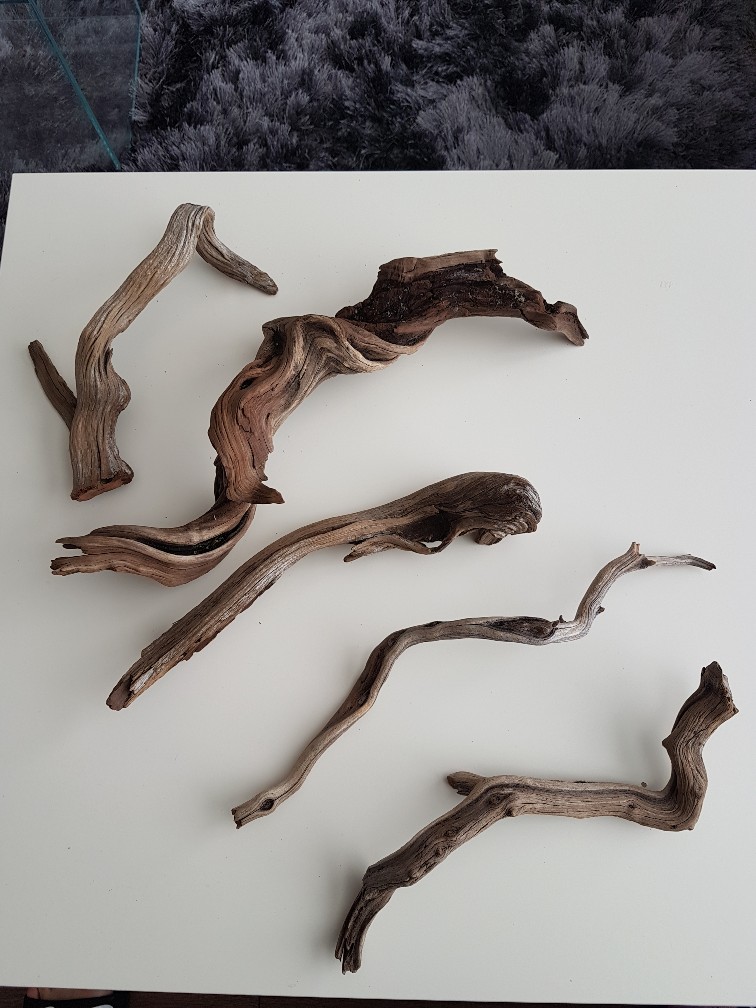 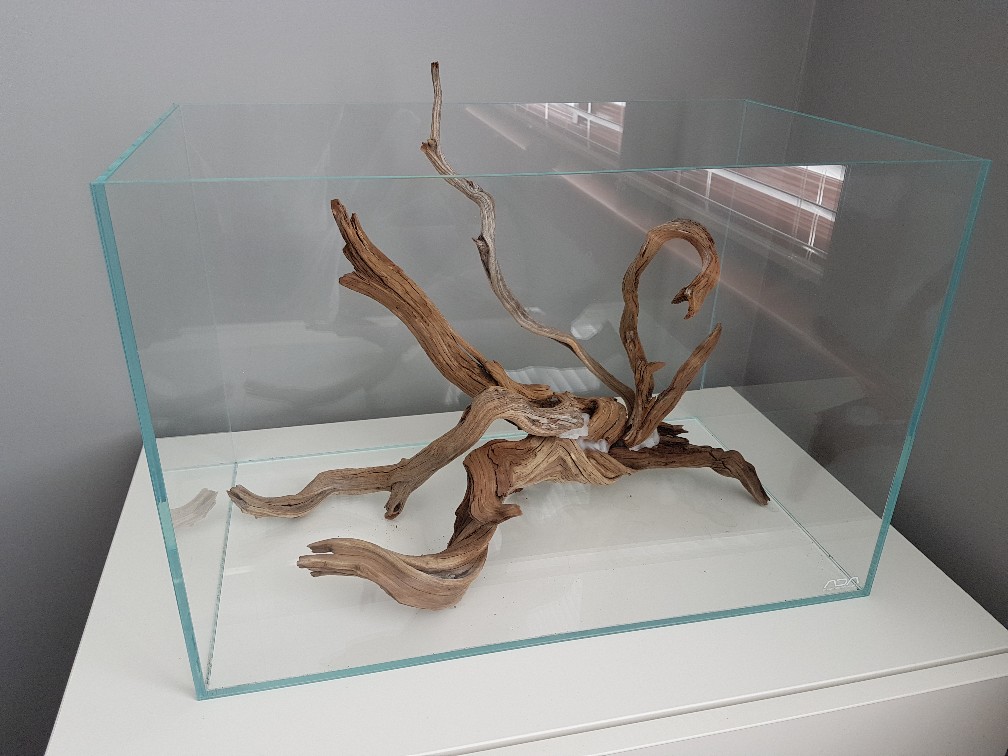 good job on the wood, looks like a great start to the hardscape

Cool man. It'll be nice to see how this turns out.
Left is the left way and right is the right way.

Finally getting round to setting this up, fiddly job but getting there 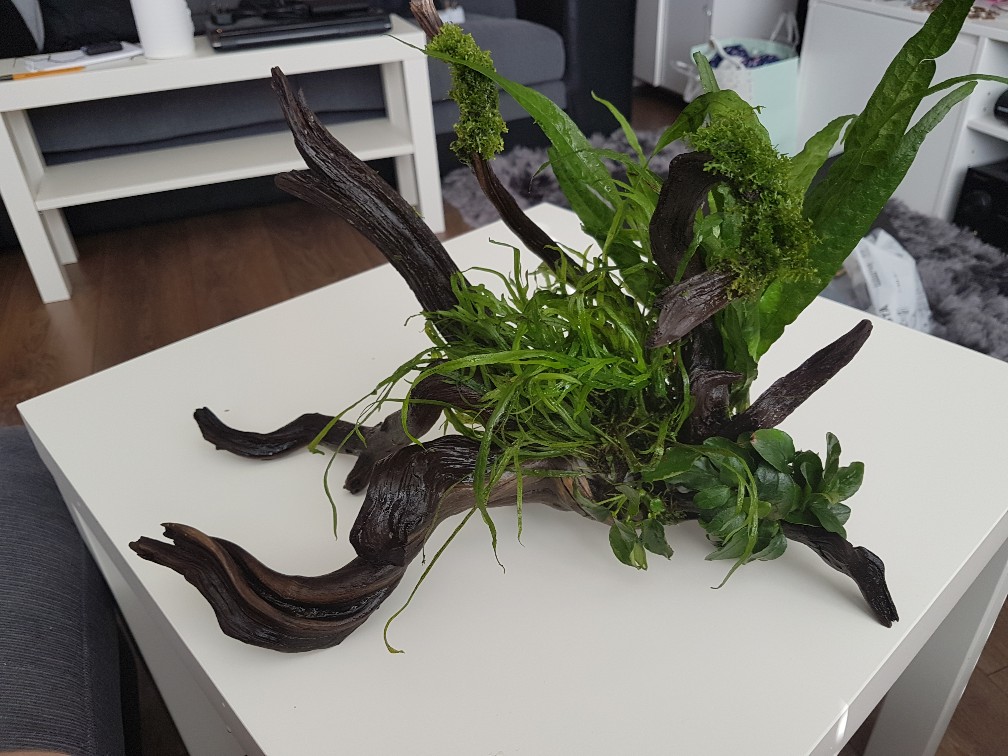 Your betta will love it if you find a solution for dimming that 451. Plants too I guess, if you're going for slow growers and no CO2. Otherwise, expect algae.
Cheers Thomas
Carpet Deathmatch
Aquascaper 600
Red & Green (discontinued)

Fiske said:
Your betta will love it if you find a solution for dimming that 451. Plants too I guess, if you're going for slow growers and no CO2. Otherwise, expect algae.
Click to expand...

It has an inline dimmer but will also be running a TC421 controller, on the fence whether I'll use liquid CO2 or not but definitely no gas
Instagram = ka_aquascaper

Excuse the reflections and glare, impossible to get a good shot during the day

Last shot is gravel I'm on the fence with adding to give the substrate a bit more texture, but I kinda like it simple as well.... 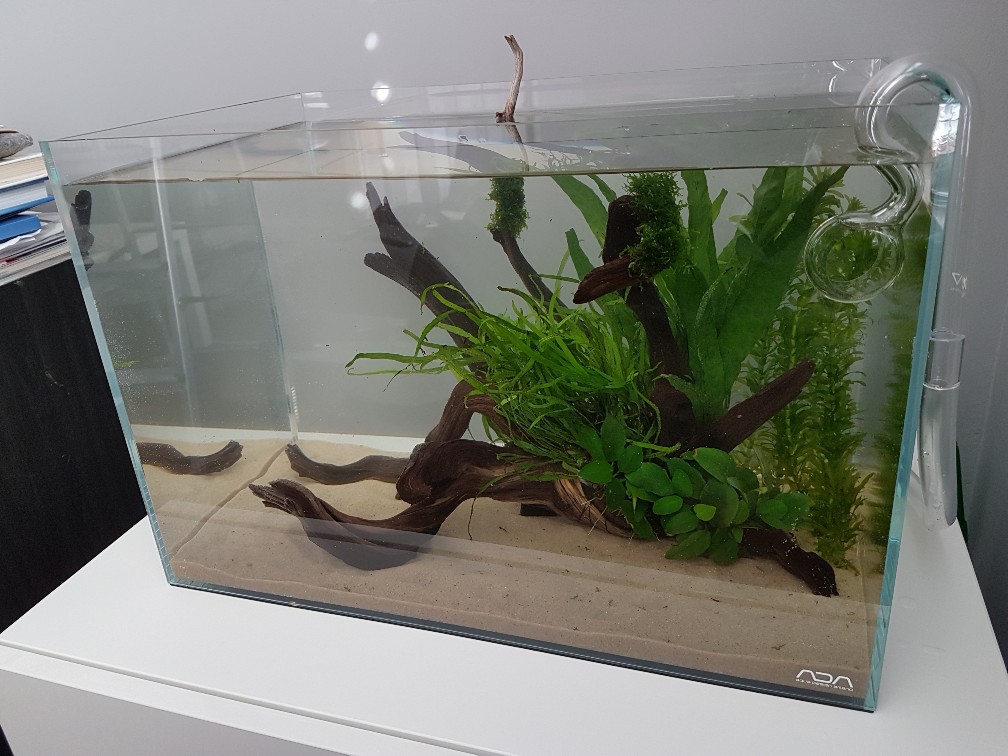 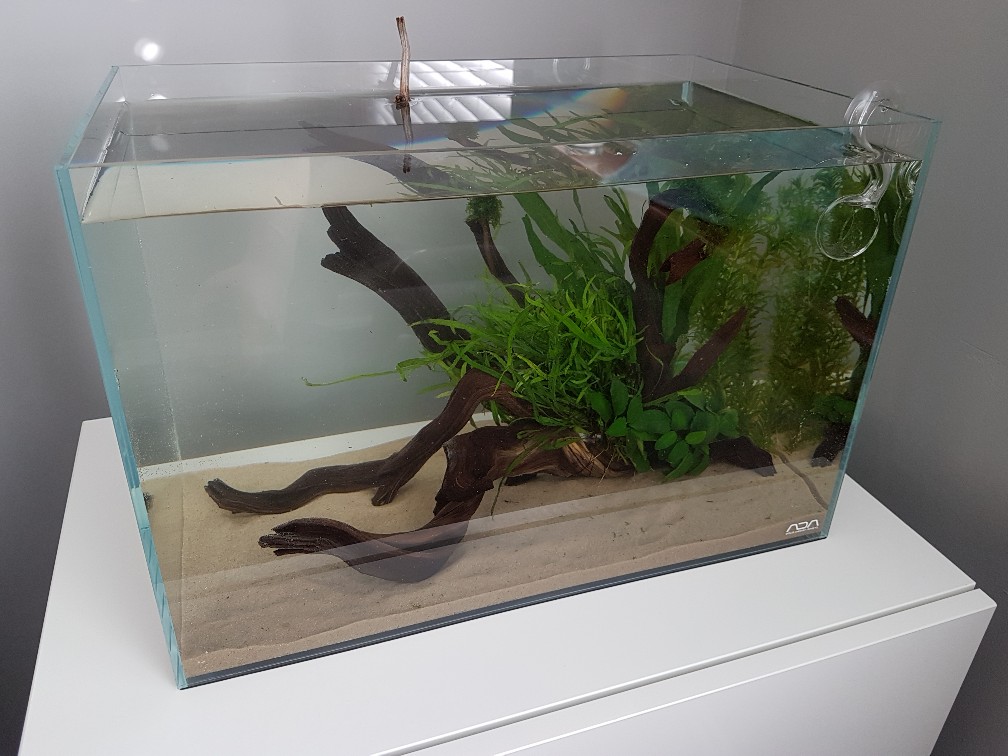 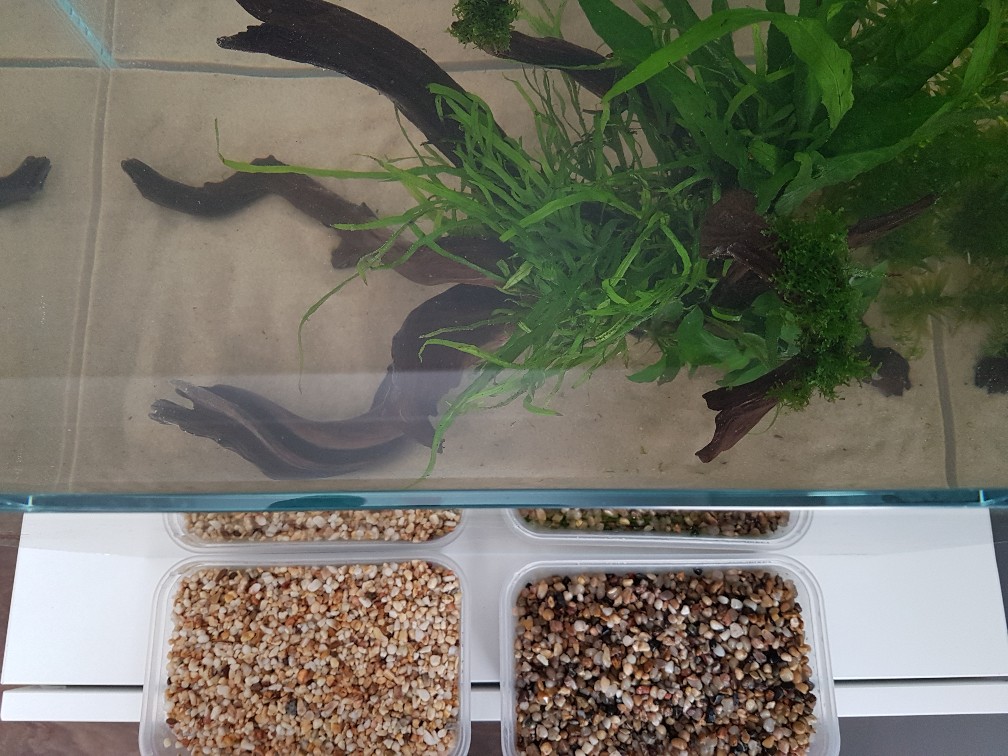 .Looks great.
I would add the gravel under the wood leave the left side and front plain sand.

Yeah add some gravel.
Left is the left way and right is the right way.

Done for the day, will see how I feel about the gravel in a day or 2 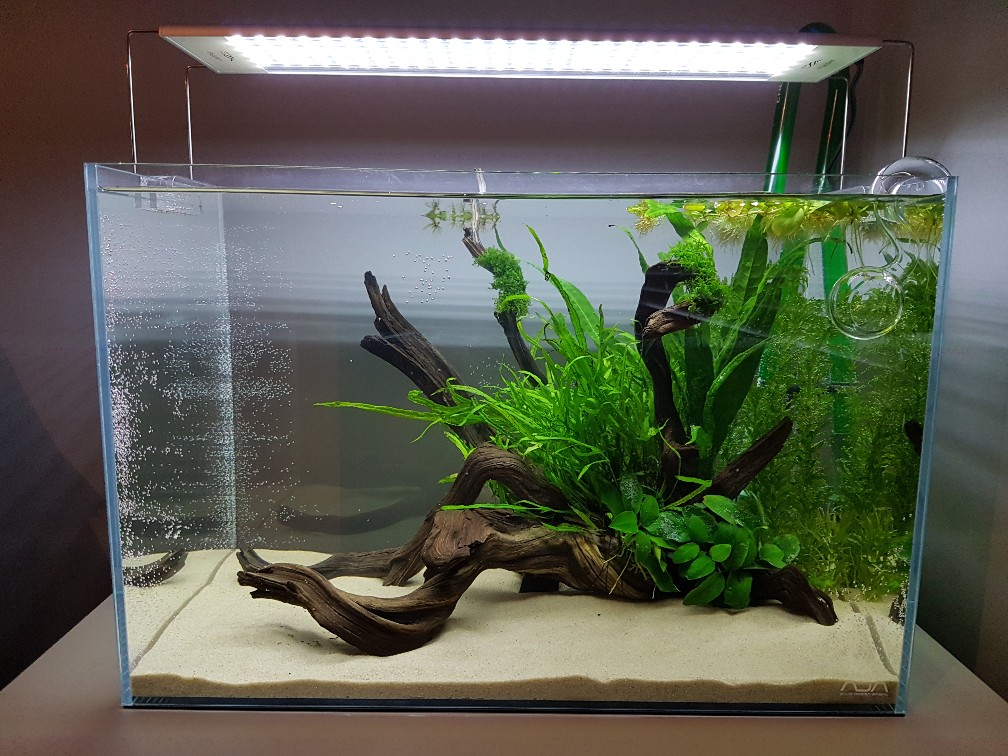 Nice epiphytic planting, and wood. I like the contrasting negative space as well
.
A Brief and Incomplete History of Aquascaping. Soil Substrate Planted Tank - A How to Guide
Schism Reimagined. NatureScape. Return of the Shallow. Windswept Eternity, Primordial. The Dark Side or What Lurks Beneath

Running a VIV Lily Pipe Spin coupled up to an Eheim 250t on this, overkill as it's 950lph but i'm restricting flow by using the spin pipe and reducing tubing from 16/22mm directly from filter down to 12/16mm so i can use 13mm inflow/outlflows.

Had the filter turned right up initially and the spin pipe does a good job of keeping the gentle flow throughout the tank.......the only downside which my poor betta can testify to, is that it creates a vacuum at each side of the pipe which sucks anything near it in. Upon inspecting the lily pipe my betta had the washing machine treatment and the filter is now turned down to half way. Very slight movement of plants but more importantly the betta can swim close but get away from the outflow without the fear being sucked in and being dazed and confused for the next 10min

Wanted to try the spin pipe out of curiosity but will be keeping an eye on it and see how well or not the betta and plants react to it, the juggling act of keeping a very gentle flow for the betta and a healthy enough flow around the tank!
Instagram = ka_aquascaper

I always avoid liquid carbon with my beta's, not because I have scientific proof of it being harmful to them, its more just a general instinct. You may find good results with simple ferts and water changes with the plant selection, a further consideration would be floating plants, but may not be to your aesthetic tastes

Aqua360 said:
I always avoid liquid carbon with my beta's, not because I have scientific proof of it being harmful to them, its more just a general instinct. You may find good results with simple ferts and water changes with the plant selection, a further consideration would be floating plants, but may not be to your aesthetic tastes
Click to expand...

Floating plants are already in (frogbit and salvinia). That's exactly my thinking, i'm going to try and run this on ferts only (1/5 EI) and see how i get on. Liquid carbon will only be added if plants struggle. I'm still trying to find a balance in my high tech so don't want to over complicate this one
Instagram = ka_aquascaper 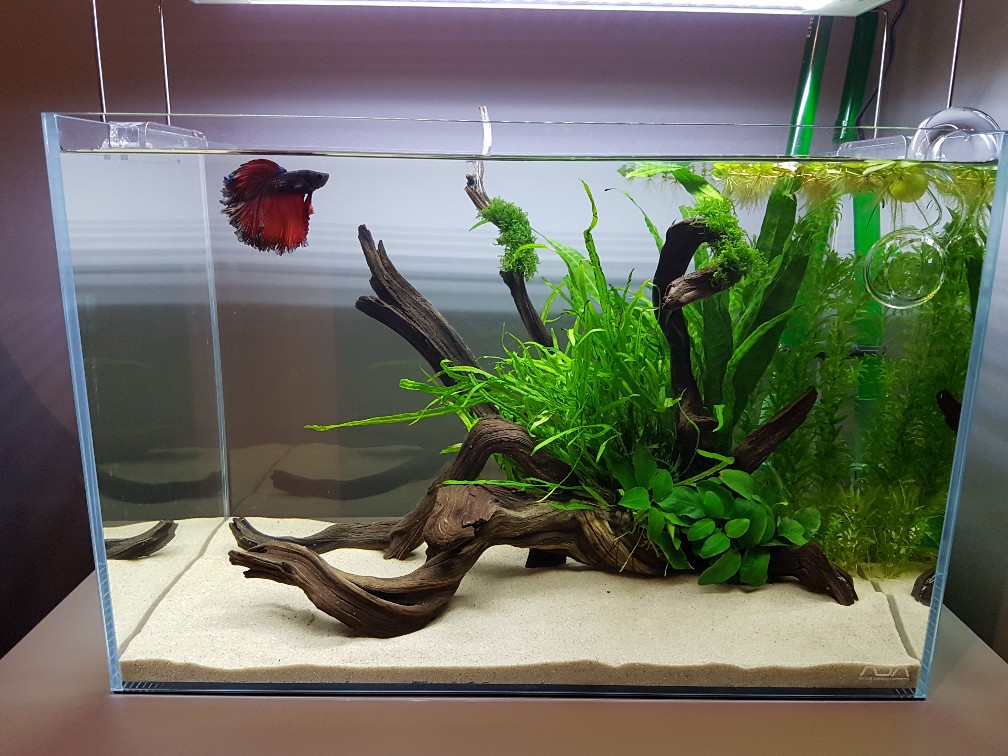 Wish I could find wood like that around here. Is that really manzanita? The stuff I ordered a while back looks more like: http://www.treelocate.com/wp-content/uploads/2017/06/manzanita-branch-pile.jpg ... much lighter in colour and also more thin and branch-like.

I love the rich smooth texture of that wood you're using. Looks like select ADA horn wood Where did you get it from?

Thanks mate I got it from Aqua Essentials, I've noticed the lighter manzanita and also ADA hornwood and have to say it does look more like hornwood, it was sold as manzanita but it's quite soft and smooth so not sure if either aged or just named incorrectly

This is the main lower piece when I first got it 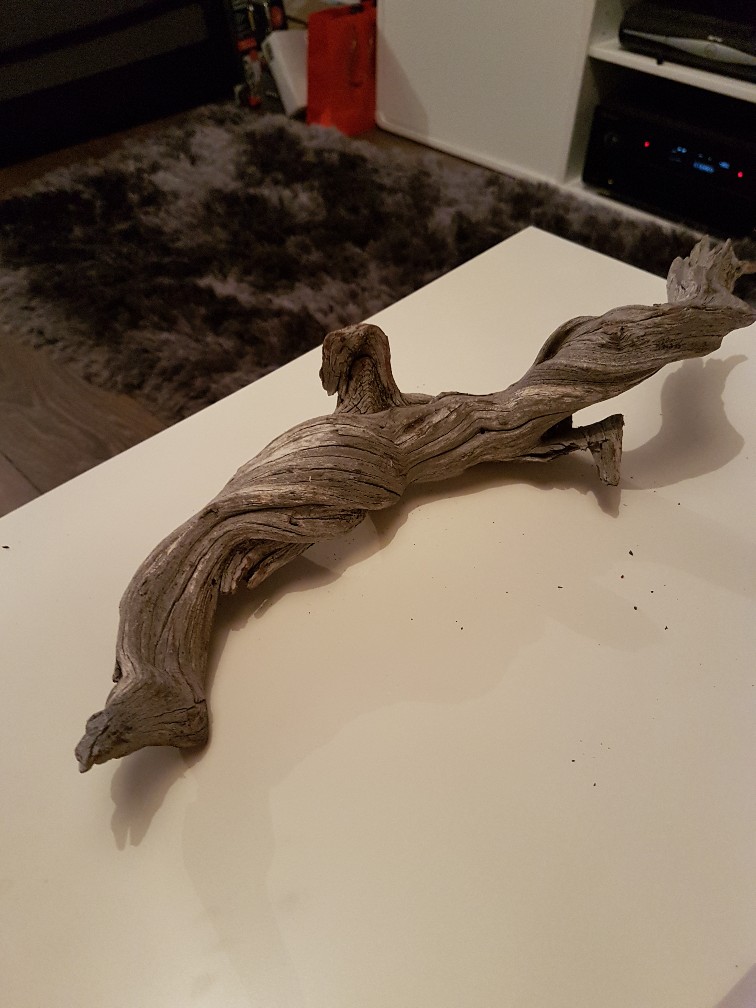 Cool, thx for the link.

That is going to be one happy betta. Wish I had got the 45p for mine instead of the Mini M for the additional space. Have you given your betta a name yet? My daughter insists that all of our bettas must be named.
You must log in or register to reply here.
Share:
Facebook Twitter Reddit Pinterest Tumblr WhatsApp Email Share Link