Looks amazing and a beautiful lil fish too

Water change tonight and after some fissidens arriving in the post from @Ryan Thang To I added that in as well as some gravel, might play about with it a bit front left but overall happy with it 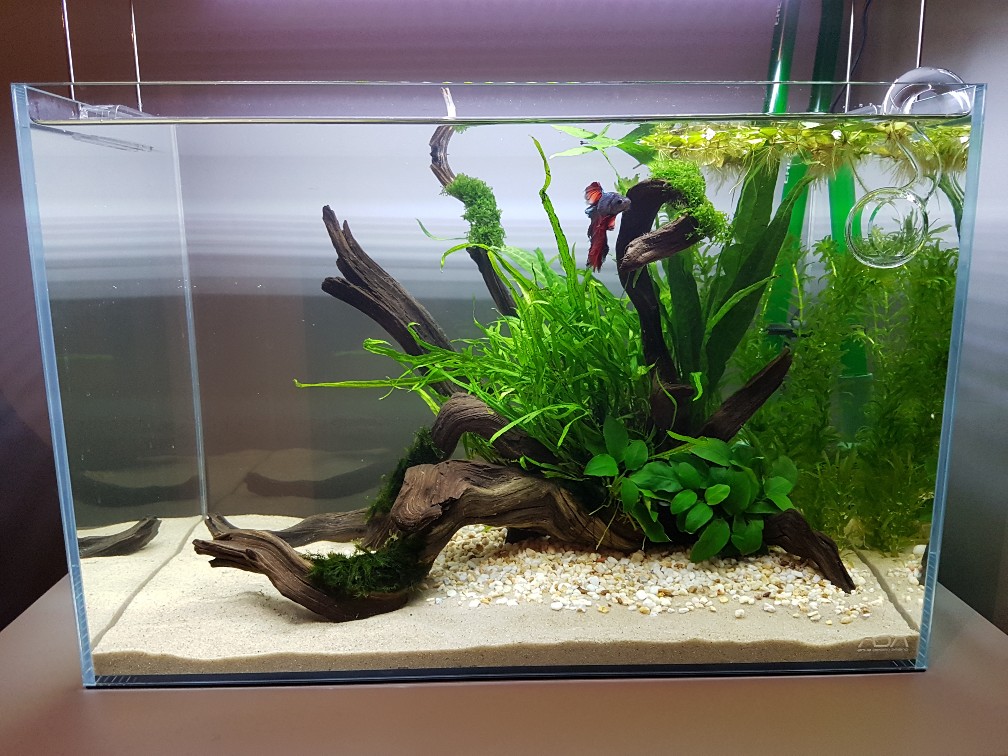 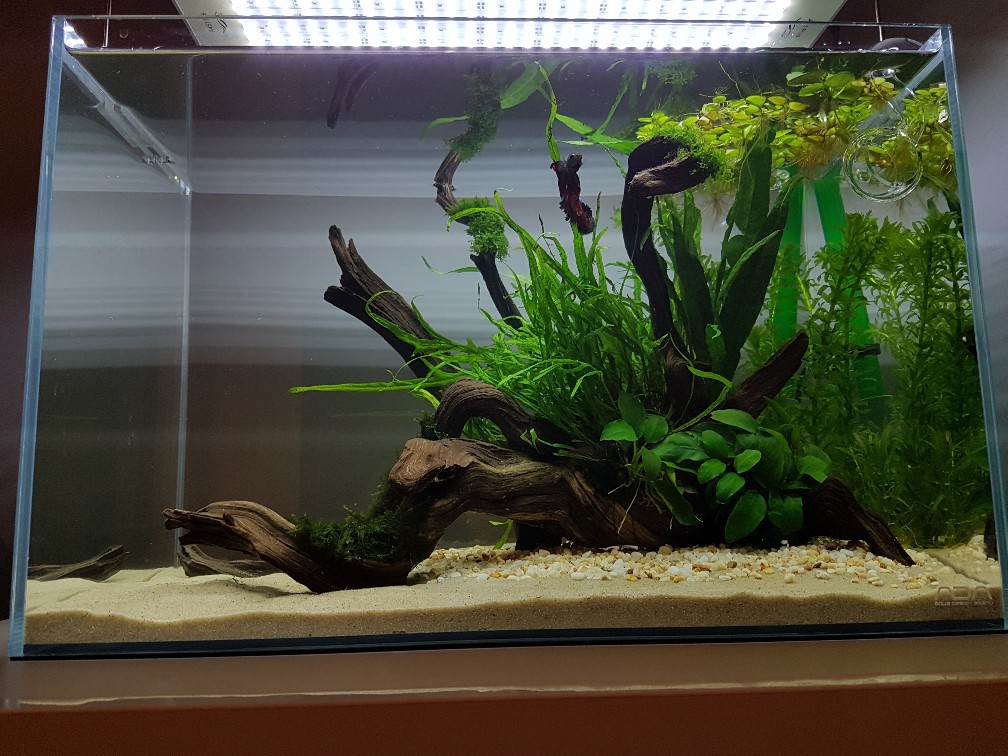 Adding Gravel is an good idea, adding some small sized pebbles under that Wood would look even better IMHO
Instagram

Adding small stone or pebbles at the base of the wood was the initial idea but I like the clean look it has without at the minute, I've got some small stones lying around so might have a pay about but pretty happy as is
Instagram = ka_aquascaper

Beautiful scape, I really like the way you've arranged the wood and the selection of plants. 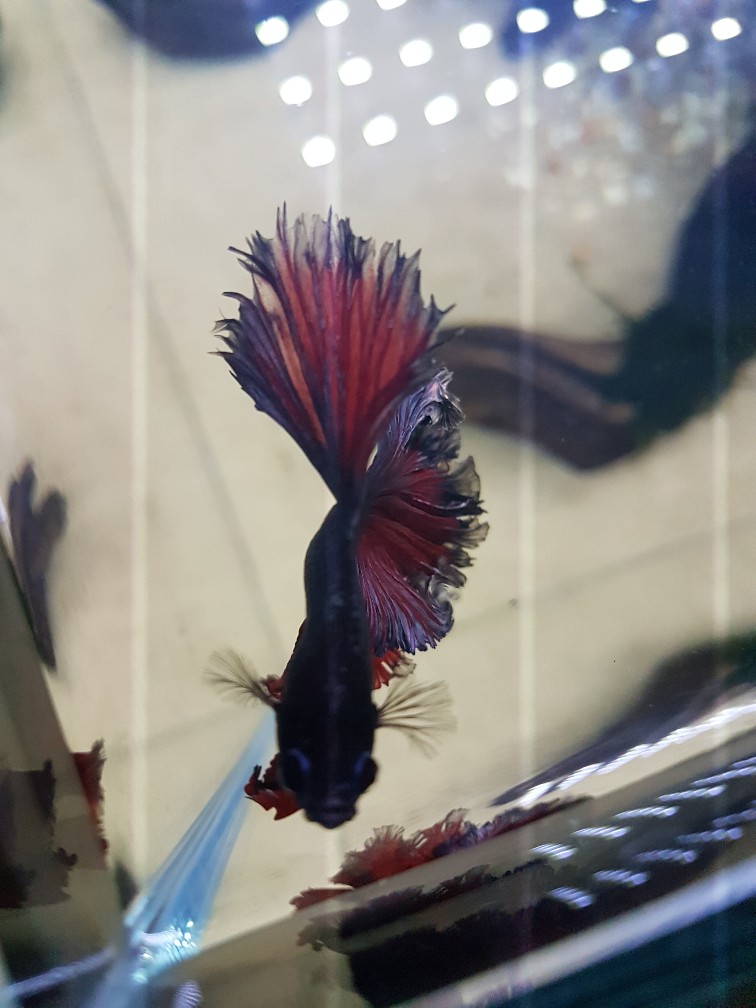 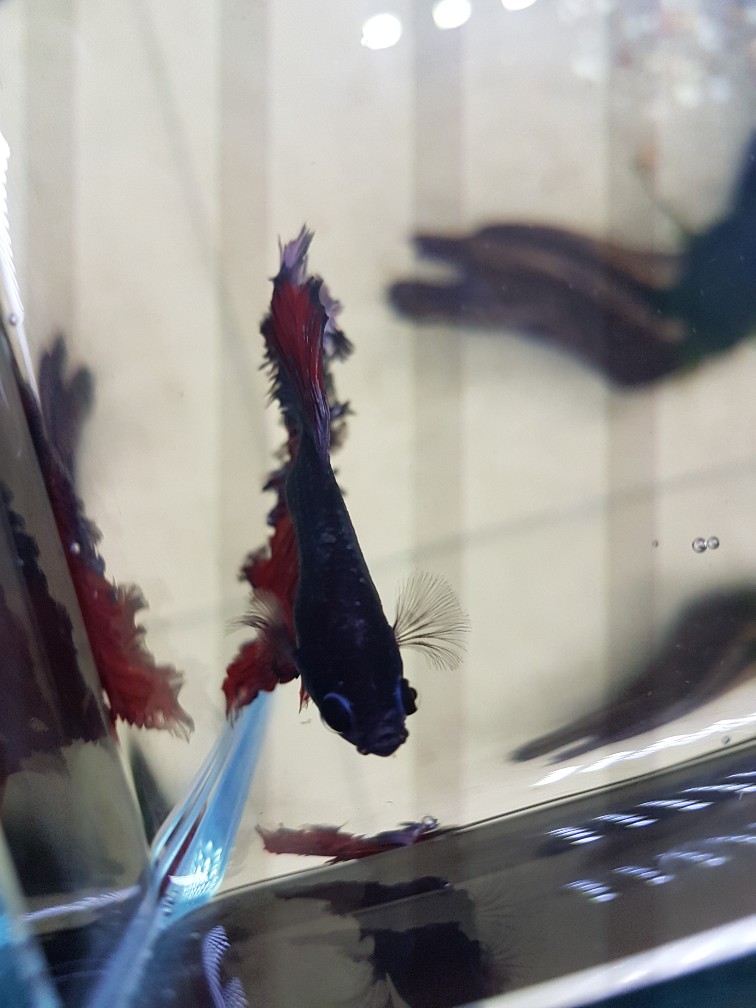 Anacharis has been growing rampant in the first week and reached the surface alreadg, major cut back and replant to the dismay of one betta... 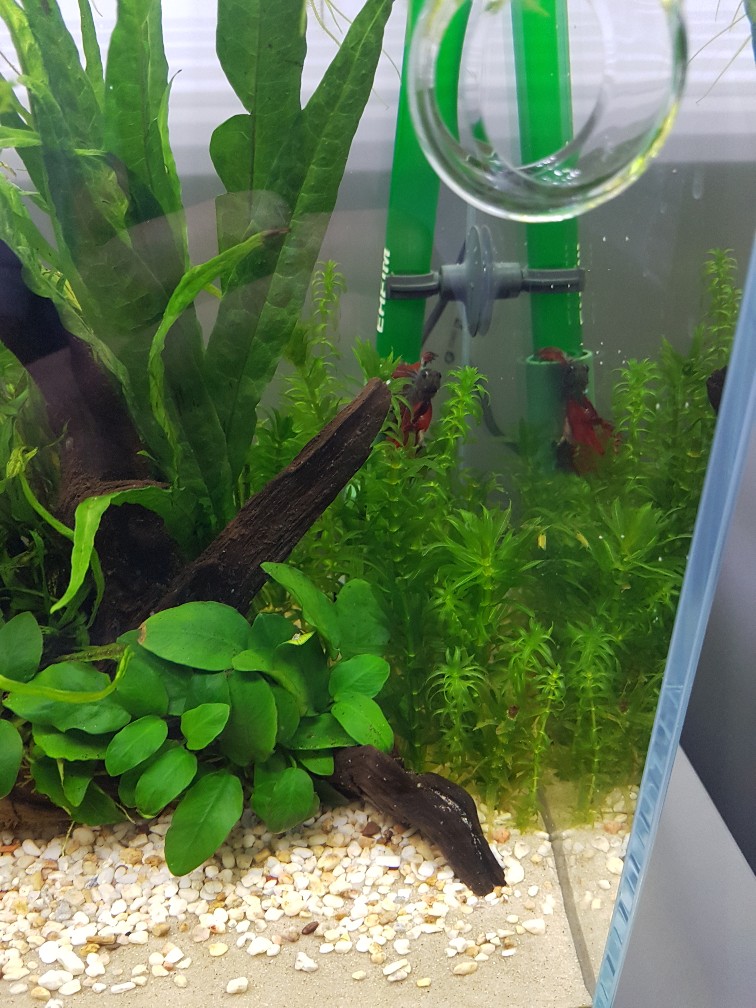 Added 5 shrimp from my other tank into this to see how they'd get on together, both are inquisitive of each other but no aggression at all, betta will swim near them but isn't interested and they'll come right up, walk past and he doesn't bat an eyelid 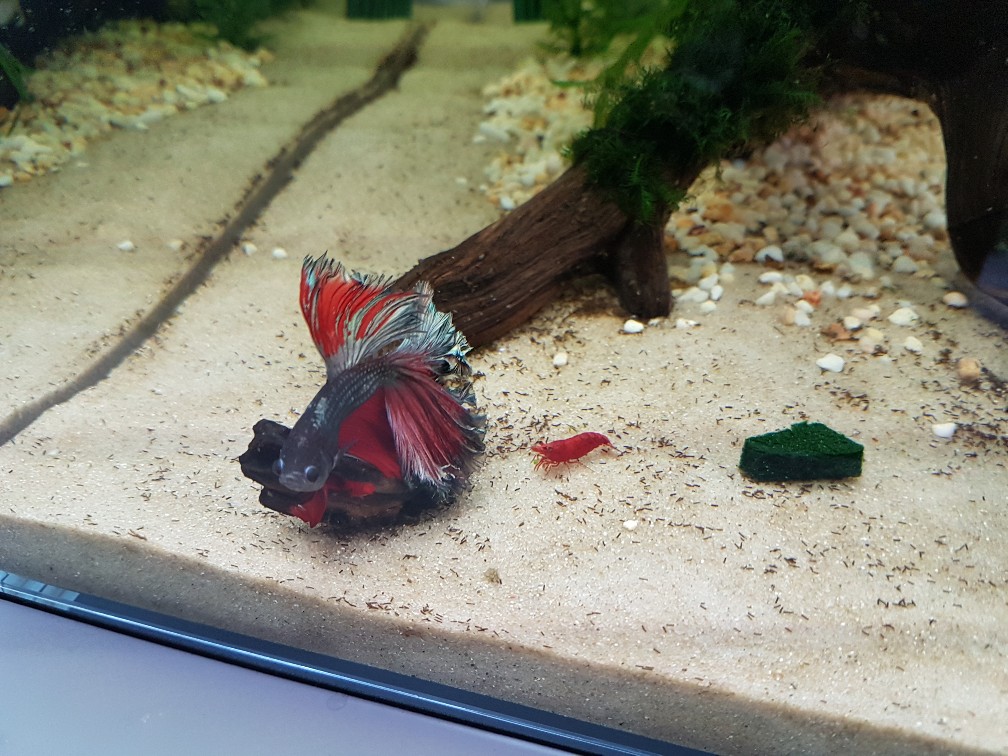 Lol would you just look at all that poop

Meander, Counted Sorrows
Experimentation is the key to growth - Pardeep

Gill said:
Lol would you just look at all that poop

Yeh it's fair to say the shrimp have settled in well.... That's only 4 days and 5 shrimp!
Instagram = ka_aquascaper

Not updated this in ages so thought I really should.

All shrimp have been removed so it's betta only and has been for a while, unfortunately my betta has been suffering from pretty bad fin rot the past couple of weeks and I think his eyesight is going as he's not able to spot food as well, still acting normally and happy apart from that with bubble nests but just not as active as he used to be

After never having success with frogbit with most of it dying off even with dosing full EI I've finally started to see a difference since I started to dose calcium at the last water change (very soft water), somehow affecting uptake of another fert??

This is how it stands now, should have got a before the sand removal and clean but I removed masses of fissidens so some of the wood is looking a bit messy at the minute 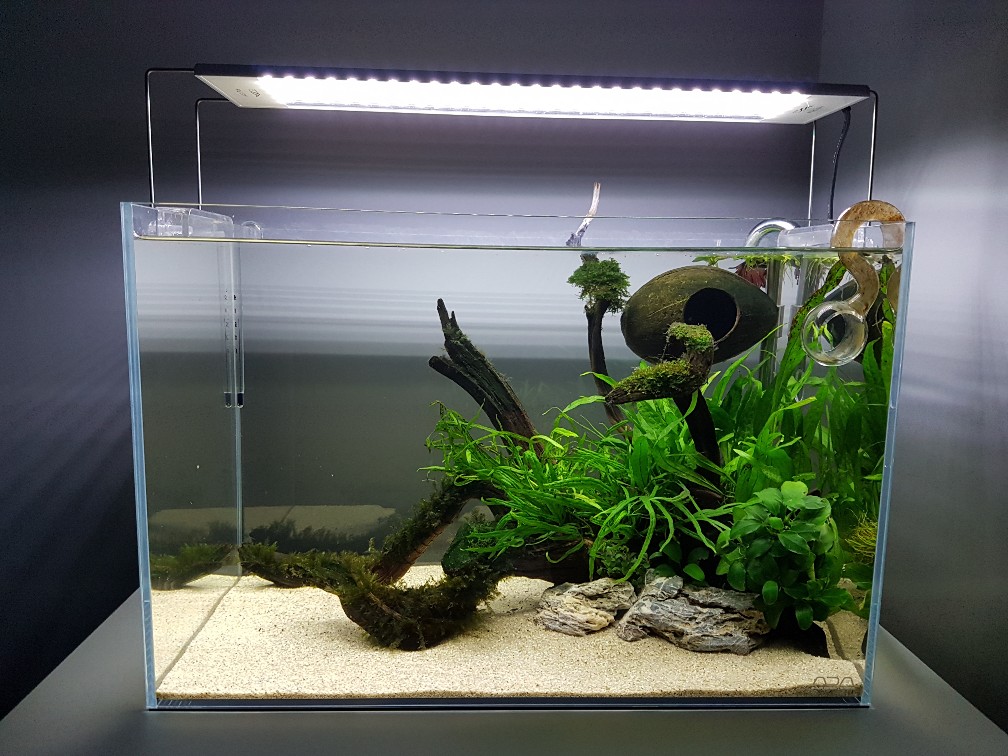 Hi Kalum
To be successful fith floaters is best if U manage to contain them in one area of the tank so they dont get moved (get bashed )arround.I use fluorocarbon fly fishing line just under water level with suckers on glass is virtually invisible in water.I grow floaters indoors and outdoors(in rain water) successfully and some have never seen ferts but still growing.I will personally go for Dwarf watter lettuce in that size tank as frogbit can get really big root system
Regards Konsa
Last edited: 29 Dec 2018

Konsa said:
Hi Kalum
To be successful fith floaters is best if U manage to contain them in one area of the tank so they dont get moved (get bashed )arround.I use fluorocarbon fly fishing line just under water level with suckers on glass is virtually invisible in water.I grow floaters indoors and outdoors(in rain water) successfully and some have never seen ferts but still growing.I will personally go for Dwarf watter lettuce in that size tank as frogbit can get really big root system
Regards Konsa
Click to expand...

Thanks Konsa, my spin lily pipe keeps flow very calm and still for the betta so floaters are not not moving around at all and I still had no luck preciously. Interesting you have success with no ferts as well.

Out of interest do you have hard or soft water? I'm just thinking too soft water might have something to do with it as it's too much of a coincidence that I up my dkh and all of a sudden they spring to life
Instagram = ka_aquascaper

Hi
I have moderately hard water out of the tap.
But doubt that it has much to do with the floaters success as I have them outside in pure rain water too.They grow slow in there but still grow.I have some frogbit in there now that is not completely dead yet from the cold.My tanks are all covered tho
If one floater is not working try another.U never know
Regards Konsa

Unfortunately my wee betta took a turn for the worse over the past few week and was struggling to swim, would dart to the surface then literally fall to the substrate then he'd just lie on the substrate on his side, was eating till the past couple of days and was clearly suffering so I've just had to euthanize the poor wee guy
Instagram = ka_aquascaper

That's a bummer mate, if it's any consolation he looked quite an old fish. have you tried a bit of magnesium in your water. I found when running low ferts in soft water with slow growing plants that a little bit of magnesium and potassium picked the floaters up a bit.
"Man sacrifices his health in order to make money.Then he sacrifices money to recuperate his health,And then he is so anxious about the future that he does not enjoy the present;the result being that he does not live in the present or the future; he lives as if he is never going to die,and then dies having never really lived"

Probably a gut reaction but would be weird to just replace my betta into the same scape so it's been torn down and will rescape, on the look out for a Galaxy/Koi betta but in no rush as I'll be using Amazonia so will need that to cycle first 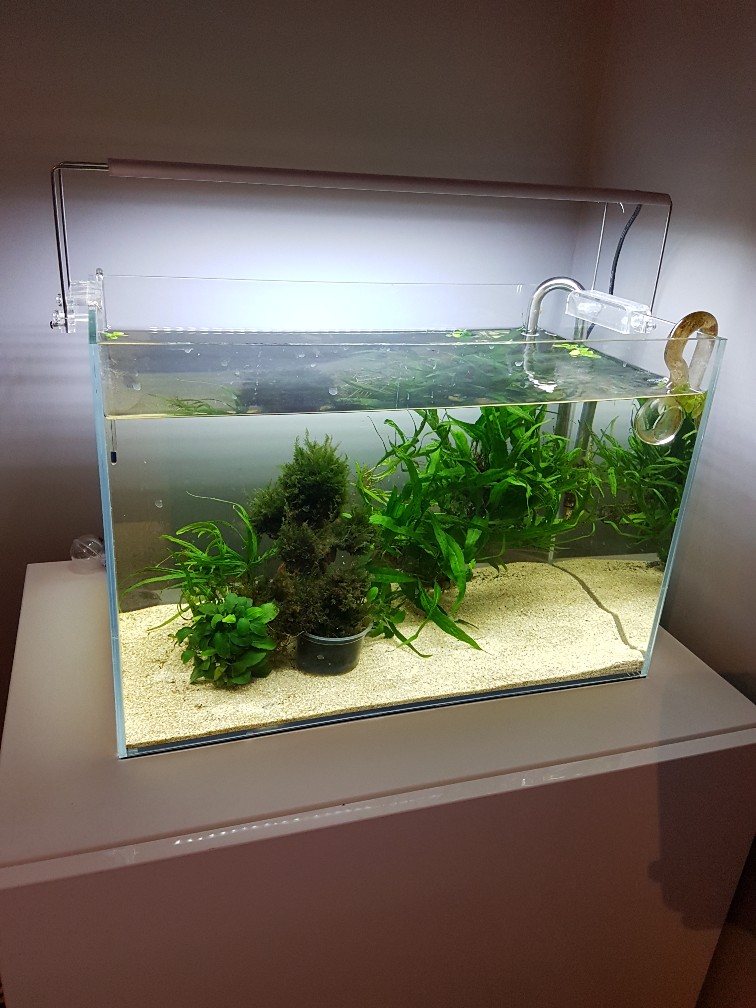 And scape table ready to have a play around with 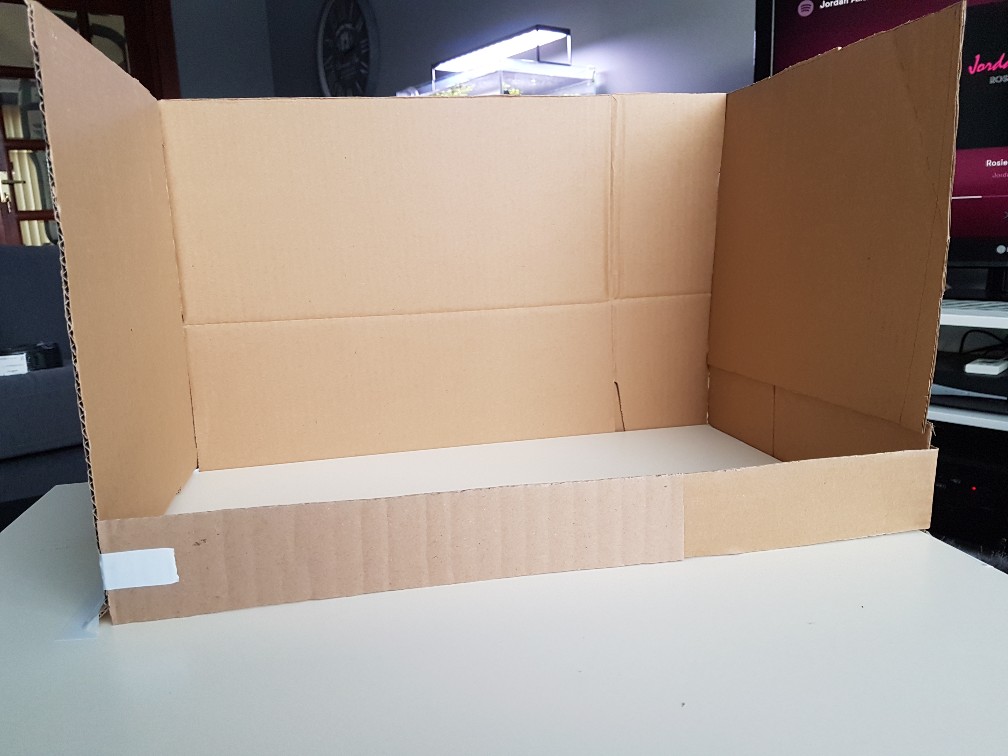