Seriously that is an excellent picture!!! The clarity is stunning!

You must spend hours cleaning !

andyh said:
Seriously that is an excellent picture!!! The clarity is stunning!

regards to cleaning, it's non exciting. with good co2, ferts and turnover this tank has been virtually spotless since day one. i found 2 tiny specs of GSA on an anubias leaf if that counts?...

I'd just like to say you are such an inspiration to me and no doubt to many others, i stared in awe at 1 picture for about an hour

, this tank has given me so many ideas and makes me want to get planting every picture is amazing, so clear and crisp and while your aquascaping talent appears to be second to none, your photography is bloody brilliant!

thanks saintly, you are a true genious

Ad, your too kind mate but thanks anyway.

andyh said:
Seriously that is an excellent picture!!! The clarity is stunning!

regards to cleaning, it's non exciting. with good co2, ferts and turnover this tank has been virtually spotless since day one. i found 2 tiny specs of GSA on an anubias leaf if that counts?...
Click to expand...

Watch out Derby is not to far from Newark, i will be getting you over!

I got it to work for my Dutch nano, but it's a mute point now since you removed the plant. It still looks good, just not the same.

Now, don't take this the wrong way. You guys are probably going to jump on me for this. People were making great planted tanks before Amano and people will be making great planted tanks after Amano. You do say he is a heavy influence and I'm sure you're chuffed when people say your tanks look like Amano's. Is that really such a great thing in the long run? Don't you want your own individuality to come through? Don't get me wrong, imitating is great for learning and you'll make pretty tanks, no question, but believe me, it is so much more fun to abandon everything and scape with your gut. Maybe the result isn't as perfect, but it's your result. I don't like to even look at other tanks when I scape. Granted, my tanks aren't even very good, and nowhere near your skill level, but you can't say that they look like somebody else's tank. They'll employ methods (Dutch, etc), of course, but you can't say llj's tank looks just like George's. And if they did, it would be pure coincidence and probably a big insult to poor George, I wager!

Just think about that for future scapes. IMO, I think your obviously great talent is kind of being wasted just trying to master another person's style.

I'd really like to see "Saintly"-style tanks now. Those, for me, would be competition winners. You'll probably win with this one too, because some people don't think the same way that I do about scaping. Already the dilemma with the A. reineckii has left you curious about exploring new possibilites. I say go with it. Throw away the scaping books, and the tank galleries, and all the rules and go with what your gut is telling you to do. Who cares if you don't follow the Golden ratio, or if you have a background plant in the foreground! I created a whole background of A. reineckii once. It looked like crap! But that's okay.

your a passionate person i can see. and for that i wont take anything the wrong way. in fact i have much more respect for people you actually say what they fell publicly!

OK, where do i begin?....I'm aware that the whole world don't revolve around amaono, but let's not for get that he's the real genius in this hobby and to copy him is my way of learning

i'm not sure if your aware Llj, but i've only been in this hobby compared to some, a short time. on the planted tank less than 2 years. in fact here's my first ever post....now you can see my novice like scapes. this was only May of last year.

so you see, i'm still a relative newcomer, most of the plants in this tank (stems) i've never tried, and the list of to-do plants is massive. 8) i think because i've fired a succession of scape in the last year, gives the appearance i've been around for a long time....i haven't

so this leads me to my individuality! before i go on, i must say thanks to you Llj, for even thinking i have the ability to create tanks in the "saintly" style...one day maybe

before i can become individual like a few others here, i first must learn how t grow plants and try different species?...this is what i'm doing at the moment. it just so happens that if i put certain plants in certain areas, they look better than just banging them in a tank and learning that way. the end results of my tanks is just a BI-Product of me trying to grow plants....not the other way around.

sure, now my Plant sp. list is getting longer, i will begin to be more adventurous....you cant imagine how many crazy ideas i have in my head

so, give me another year and may be producing some less copied scapes maybe

I think you're ready now, but it's up to you. 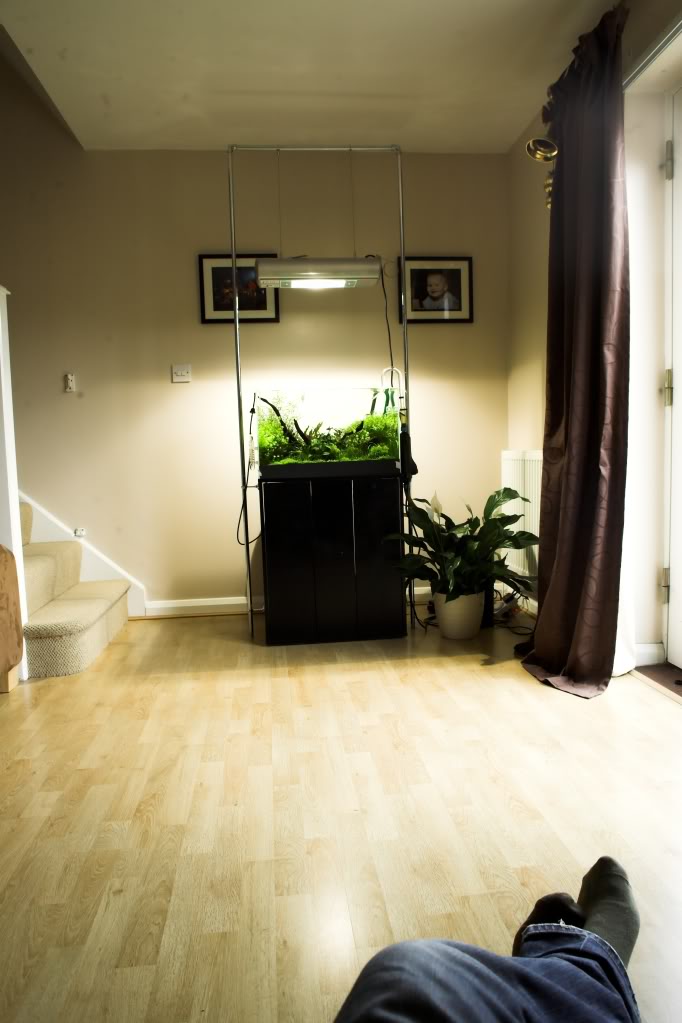 well, stems really are relentless. the rotala and the other red stem, which i cut to an inch has now started growing back! :? i left the roots in so i didnt disturb the substarte, but there now sprouting new growth. planst really are resilient things....weeds!

aaronnorth said:
I was just thinking how much that houseplant looks like a giant anubias

very similar. it's a peace lilly. same kind of flowers as anubias. likes moisture though. so i just give it a spray now and then. it's doing a good job of hiding the filter.

aaronnorth said:
I was just thinking how much that houseplant looks like a giant anubias

Funny, they've always reminded me much more of cryptocorynes!

saintly said:
TDI! so your not into feet then mate?....

Ha ha, let's not go there, it wouldn't be appropriate.

And i woudn't want to break the secret laws of UKAPS (What happens at UKAPS, stays in UKAPS).

Btw, do you possess the one ring from the Lord of the Rings, because it looks like it's been thrown in to the air by your curtains... :?:
E

TDI-line said:
Btw, do you possess the one ring from the Lord of the Rings, because it looks like it's been thrown in to the air by your curtains... :?:
Click to expand...