Where did you get the wood from?
Aaron North
My Flickr Account | Equipment needed for setting up an FE | Algae & Nutrients

aaronnorth said:
i thought i was looking at the sumatra scape then i got really confused when i saw the other tank

Where did you get the wood from?
Click to expand...

even im getting confused, i think everyones getting fed up and bored with me posting all the time :?

the wood is from sumatra!

very funny thanks Mate, do they do marines there?
Aaron North
My Flickr Account | Equipment needed for setting up an FE | Algae & Nutrients

aaronnorth said:
do they do marines there?
Click to expand...

yeh, some real nice fish actualy. they also have a huge marine tank set up.

i am not getting any yet but it is good too know.
Aaron North
My Flickr Account | Equipment needed for setting up an FE | Algae & Nutrients

of course, your from worksop. i forgot your relatively close to me.

john starkey said:
ps: the top leaves of mine are really puple too.
Click to expand...

whats the best way of achieving this? is it by limiting a specific nutrient? BTW john, the roots it gives off are massive!


LondonDragon said:
Mark the tank is looking great, you don't need a rescape after all
Click to expand...

maybe not LD but it's getting one

Hi Saintly,the best way to get the purple leaves is light intesitiy, which i think you will have with your arcadia lighting,my photoperiod is eight hours this seems to suit my setup,yes the root system is really good isnt it

john starkey said:
Hi Saintly,the best way to get the purple leaves is light intesitiy, which i think you will have with your arcadia lighting,my photoperiod is eight hours this seems to suit my setup,yes the root system is really good isnt it

thanks john, we'll see what happens when starts to get closer to the top. this is now my favourite plant. everyone comments on it. even my wife likes it....now were getting somewhere.

a couple of better pics of the same scene...i know, i know boring.

and soon i'll have some dwarf riccia to add to the scape.... 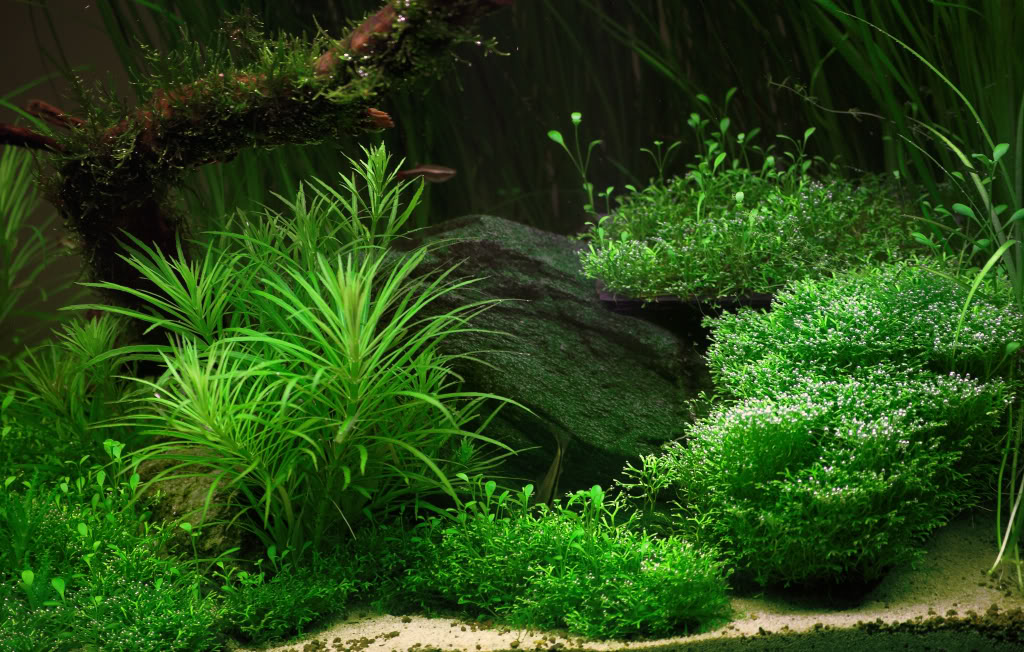 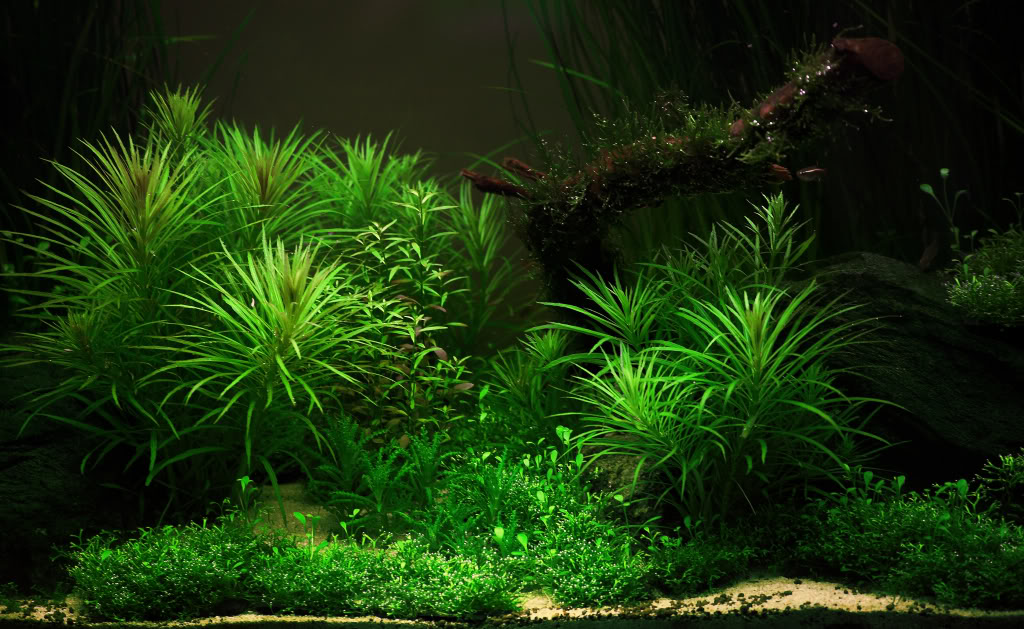 and another, practising with colour and contrast. 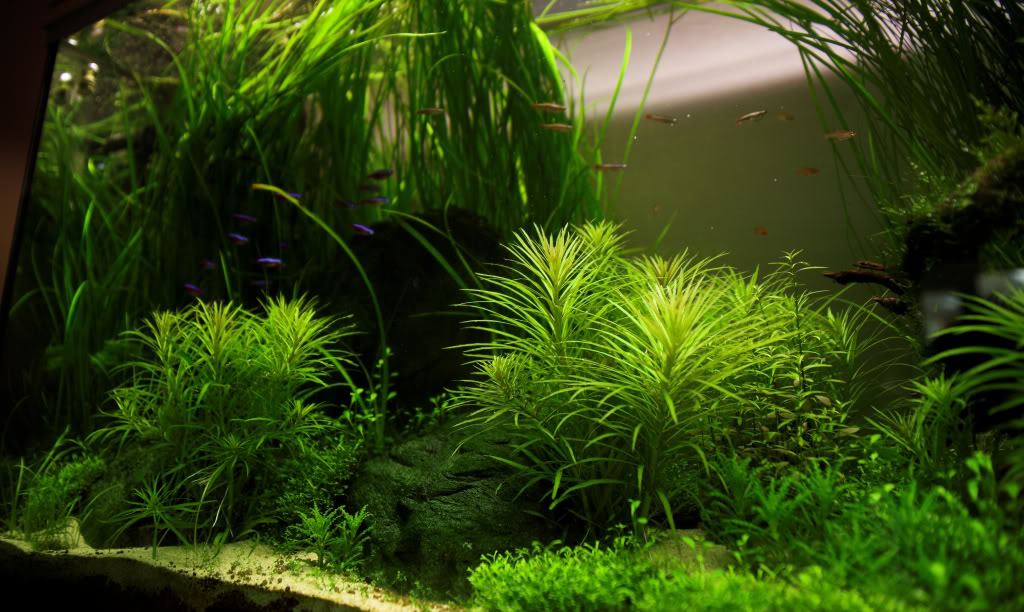 Looking great Mark,
Hey you know it's strange but that doesn't look like Limnophilia aromatica. It looks much more like Pogostemon stelleta. L. aromatica normally is fairly restrained as regards aerial root production whereas stellata is a hooligan and freely throws out thick white roots. You can see aromatica and see some comparisons to stelleta in this thread: Limnophila aromatica - The Rice Paddy Herb

thanks Clive, its turning into something that i really like. im just getting so inspired now. ive checked out your tank mate and im unsure myself. i think because John told me it was l aromatica i kinda go with it. im not so good with plant id at all. here's a couple more close up. i'll take some proper close ups tomorrow!

can you id from these?

BTW Clive you've got a stunner (tank) allot to be said for EI i reckon. 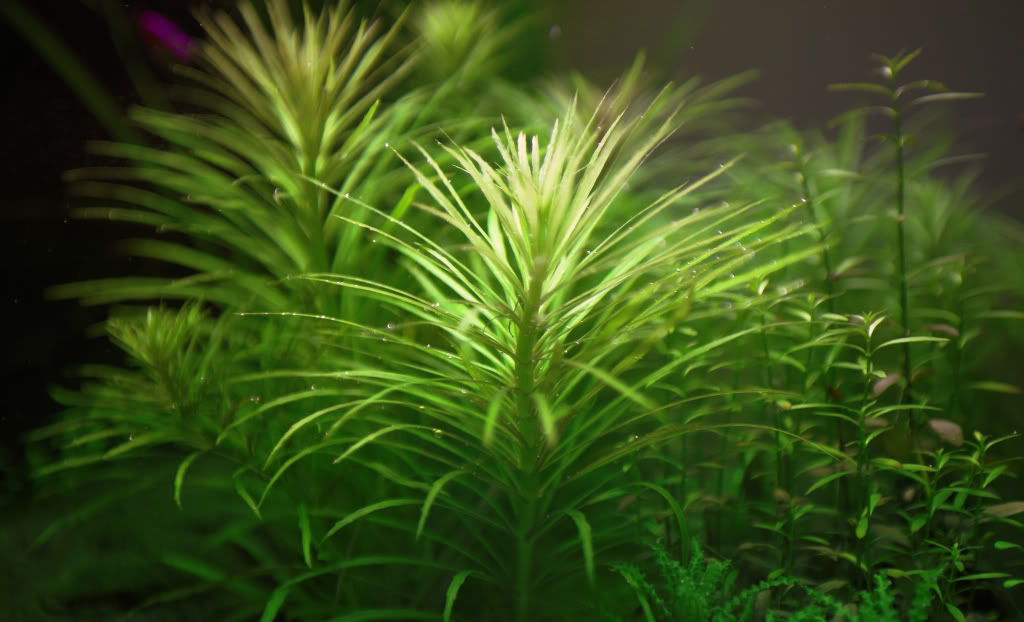 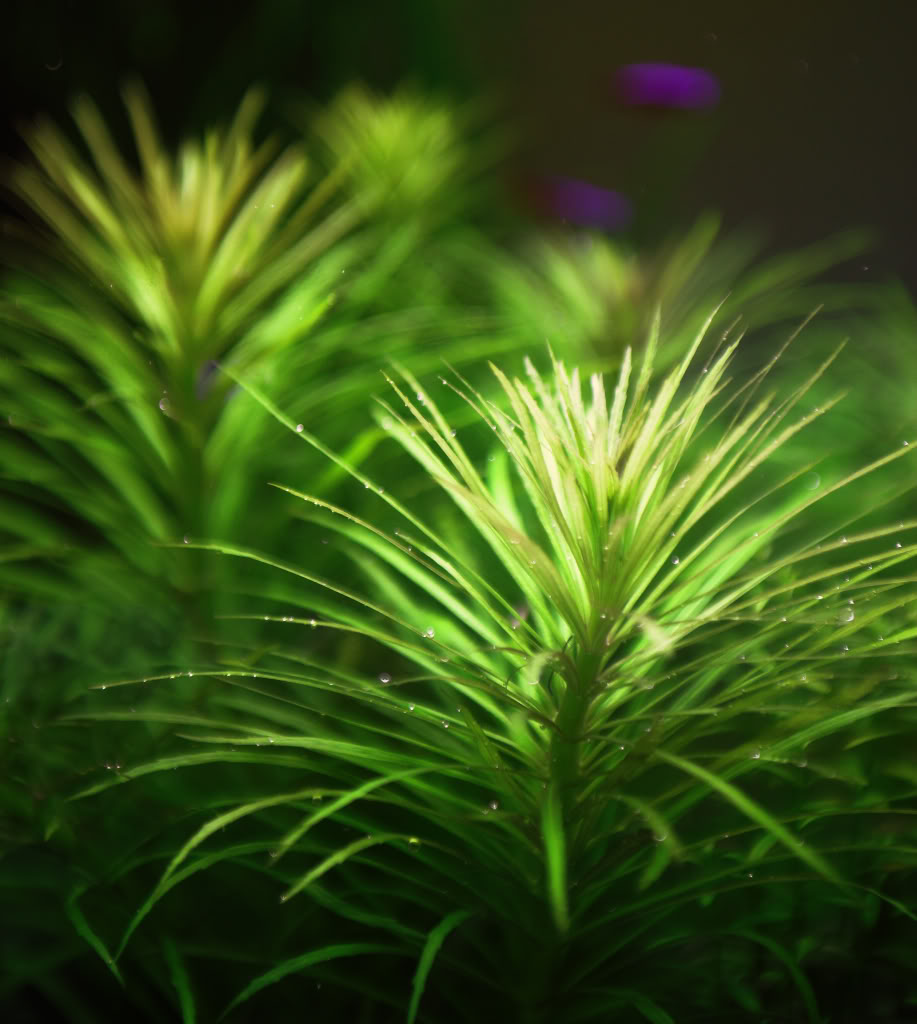 Mark, it's deffo L Aromatica that you have there, I was with John when he bought it from TGM .

Well, the ayes seem to have it. I guess John knows what he sent and cichlidsrgr8 evidently has corroborated. I've grown both and went though a very similar situation where I sent another member one specimen thinking it was the other. So this is why I have some doubts. It was only when I raised both simultaneously in an EI tank that I was able to tell the difference, so nutrient levels have an effect on appearance. I imagine there are also morphological differences depending on the supplier.
In a low-to-moderately dosed tank they look very similar but in a heavily dosed tank they are night and day. This difference is clear at the beginning where they are very different submersed form.

Here is P. Stelleta (Eustralis) only a week or two after submersion. The Tropica version of this plant has an emmersed form very similar to it's submersed state, with very spiky stelleto knife shaped leaves. The transition from one emmersed to the submersed is practiacally seamless.

On the other hand aromatica's emmersed form looks nothing like its submersed form. The only photo I have that shows the difference in the two forms is this one. You can see in the middle a couple of emmersed shoots surrounded by a forest of the submersed stems. There is a radical difference and it takes ages to go from one to the other. So the question might be: what did the plant look like at purchase? If it was already spiky it could be stelleta. But because of the difficulty in transition of this plant, vendors often sell aromatica in the submersed state, so the appearance at purchase is by no means definitive.

As both plants grow in an EI tank their differences become magnified. P. stelleta's stem becomes engorged and it throws out annoying white aerial roots. The leaves can grow to 3 inches which means a crown diameter of up to 6 inches or more. On the the surface of the leaves, Tropica's stelleta tends to be smooth with a pronounced pale vein running down bisecting the span of the older leaves. Younger leaves at the crown are more upright, only flattening out to the horizontal as they are eclipsed by newer growth above.

On the other hand, I've not seen aromatica leaves much longer than and inch or so meaning a crown diameter of a 2 to 3 inches. Again, that might be just due to my supplier and there may be aromatica versions which grow wider crowns. L. aromatica has a waffled leaf surface texture, and the leaves have a more horizontal posture at the crown during the earlier hours of the photoperiod. Both quickly close up to the vertical near the end of the photoperiod so the comparisons depend on what time of day they are observed.

Just to add to the confusion there are many different forms of L. Aromatica. I had one some years ago that was very different to the Tropica variety. Didn't like it much at the time as it only had 3 leafs per node and so looked a bit sparse. Ditched it in favour of the tropica one, but now wished I'd kept it. I'll see if I've kept any old photo's of it later. if all the varieties above come from Tropica then they should all look pretty much the same.

I agree with ceg, it is definitely Pogostemon stelleta. I have aromatica and stellata in my latest scape, take a look at my journal, the stellata is at the rear and the aromataca in front.

Hi All,firstly i will agree on one point the simularities are very much alike between P,stellata and L,aromatica, now from experience i have grown both in my present setup and i can assure you this l.aromatica is not the same as P,stellata maybe as James c said there are many different types of L,aromatica but the one i bought from TGM was a tropica variety and it was sold to me as L aromatica,Clive says that root growth from the stem is not normal in L,aromatica but if i have a true L,aromatica then i have lots of root growth from half way up the stems,hope this helps regards john
www.johnstarkeyphotography.co.uk
You must log in or register to reply here.
Similar threads