Should you clean a snail?

I’ve got one random Nertie (dark one in middle of picture) that’s got a rough shell and picks up debris, to the point stuff is now growing on it lol. Gently brushing it doesn’t appear to work. Any tips?

I have one running around with algae on its back.
H

Only on here would someone ask... 'should you clean a snail?' and have people not think you're nuts. I love this forum

I quite like his camo. I'd probably leave him as he is, as long as it doesn't seem to be bothering him. Sorry I couldn't offer more help

leave it be. I used to get greater pond snails with huge afros of hair algae and Marino. In my outdoor tubs years ago.
Last edited: 31 Mar 2021
Meander, Counted Sorrows
Experimentation is the key to growth - Pardeep

Driftless said:
I have one running around with algae on its back.
Click to expand...

This had me going

I saw one nerite with algae on its shell at my local P@H and also a bamboo shrimp. Awesome. Next time I’m buying those guys 🤣
N

makes me miss my tuxedo urchins, they used to pic up and shift loads of small corals and alter the layout of the tank

id leave it be, less likely to harm it and one of the others will graze it soon enough.
the ex marine sumped cube

not called Bob said:
makes me miss my tuxedo urchins, they used to pic up and shift loads of small corals and alter the layout of the tank

id leave it be, less likely to harm it and one of the others will graze it soon enough.
Click to expand...

I've got a lot of ramshorn snails in many of my livefood tubs, some of them grow algae on their shells and some don't, there's one at the moment that has several batches of eggs stuck to it's shell, but there's also a snail in one of my ceriodaphnia cultures whose shell is entirely covered in a massive colony of some sort of colonial rotifer. It looks strange, almost like it has feathers or something. I've seen the same rotifers actually attach and form colonies on the carapace of daphnids before too.
L

Look at the state of this one. I think itt's actually some kind of Vorticella rather than a colonial rotifer living on the shell. People say this is a pest of aquatic shrimp however it's ubiquitous in all of my livefood cultures and, although it does sometimes even attach to daphnia and moina, I feed from those cultures daily into my shrimp tank and have never noticed any effecting the shrimp. I believe small predatory fish such as Boraras must consume them in sufficient numbers to stop them becoming established. 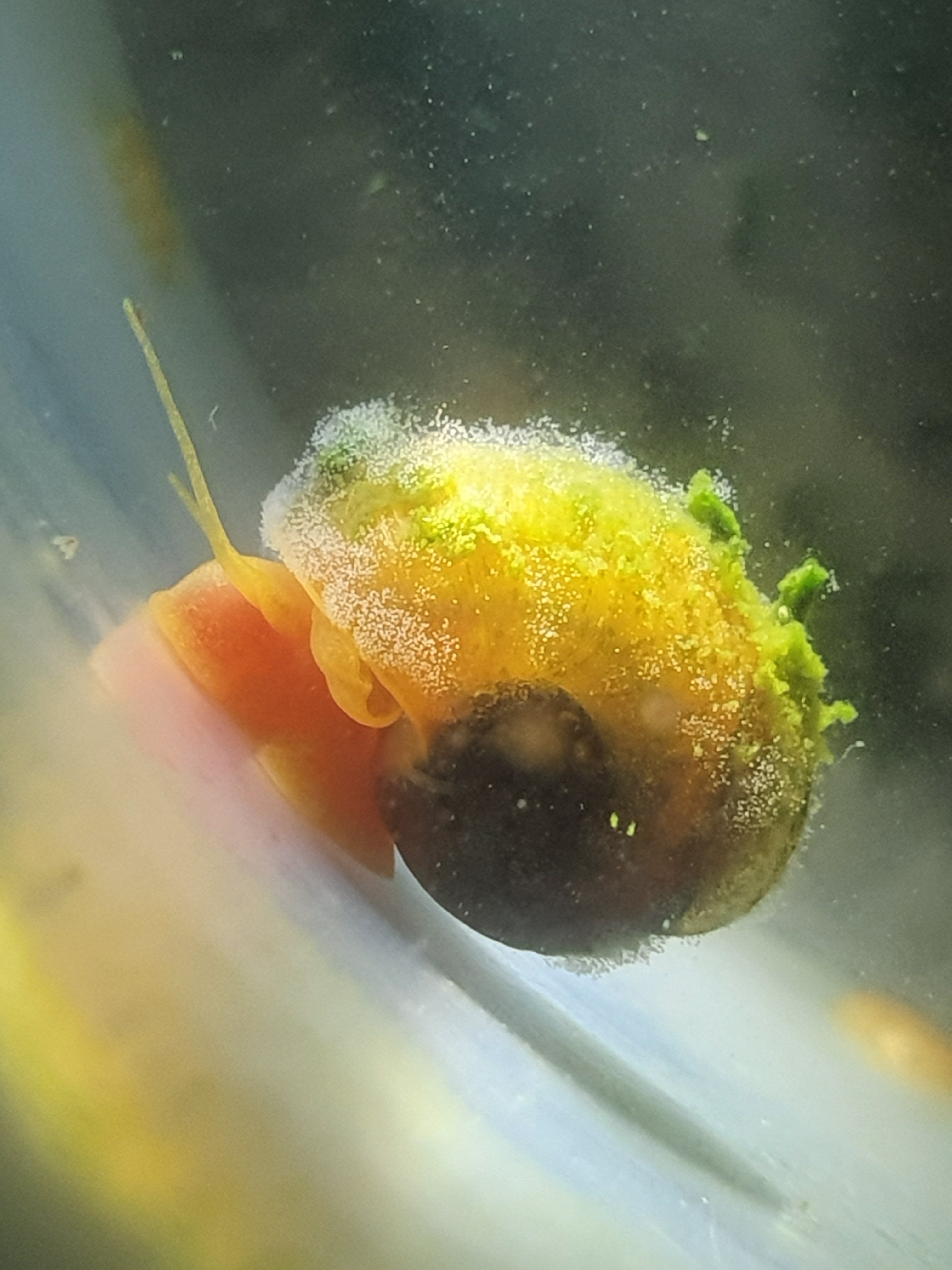