Okies, enough is enough - my cabinet is just too small. I have some ideas on tidying it all up, but I figured I should ask advice first before buying anything that maybe isn't the best for pipework routing etc.

I have a Juwel Rekord60/70 cabinet so it isn't the full width of the tank. I have a TetraTec EX600, external heater and now Boyu diffuser to fit in there somehow, and the idea of getting a 2KG FE in there aswell is perhaps too ambitious - I did squeeze a Jaqno in there but it was a right pain getting the filter out for cleaning.

Are there better ways to route piping etc? I end up with kinks and the lily pipes always want to slant and twist because of the tight pipe curves.
120 Litre Juwel Primo LED

The hoses are slightly kinked but the rated 1550lph makes up for it... I don't use a heater either. 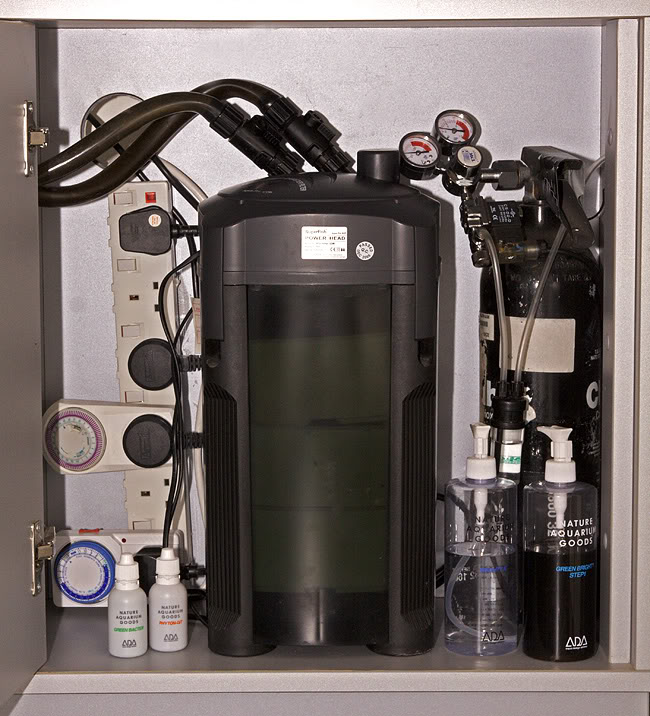 Lucky, you have a much wider cabinet than me!

I'm tempted to take it all down and put a few small holes in the side to route the piping in and out, it'd be much easier I think. That and somehow fix the Boyu and external heater to the inside walls of the cabinet - if I then use a little more length on the pipework then I can use a loop where needed to avoid kinks...I think...
120 Litre Juwel Primo LED
A 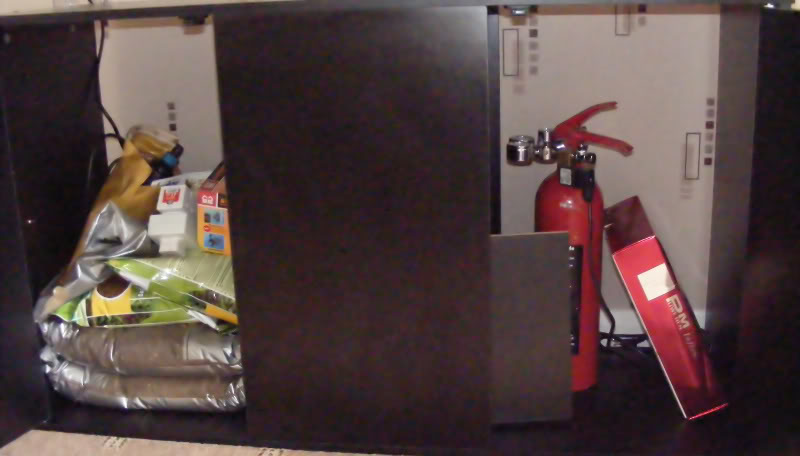 I think this is pretty nifty by FlyFisherman
viewtopic.php?f=20&t=5924&hilit=pipes&start=10
Aaron North
My Flickr Account | Equipment needed for setting up an FE | Algae & Nutrients

Here is inside my Juwel Rio 125 cabinet:

That linked thread is excellent! I'd need to strip the tank to do that though I reckon...unless superglue would work...hmm...B&Q trip methinks!
120 Litre Juwel Primo LED

Ok, mine is now tidy with (just!) enough room for a 10cm x 61cm 2KG FE too once it and the eBay regulator and solenoid arrive

Shame I had to lose the shelf but nevermind, it's at least tidy and the pipe loops leave plenty of length to remove the filter for cleaning, and each lily pipe has a Wilkinson's quick release connection on to make it easier to clean the glassware in the future!

The Eheim rubber suckers I bought are an absolutely perfect fit for the 13mm lily pipes too (only got one pipe for now as one broke as per previous thread...) so they now sit much safer on the outside of the tank which I am very happy with!

If space permits I'll mount the plug rack either upside down on the roof of the cabinet or somewhere on the right of the FE leaves enough space. The improved flow from the filter is amazing, as there are no kinks in the pipes - I do wonder if the current Tetra plastic outlet (from the tank) strainer offers a much better flow than the glass version but time will tell if it was this or the Jaqno that has been restricting flow - probably both of them had their own affect I guess. 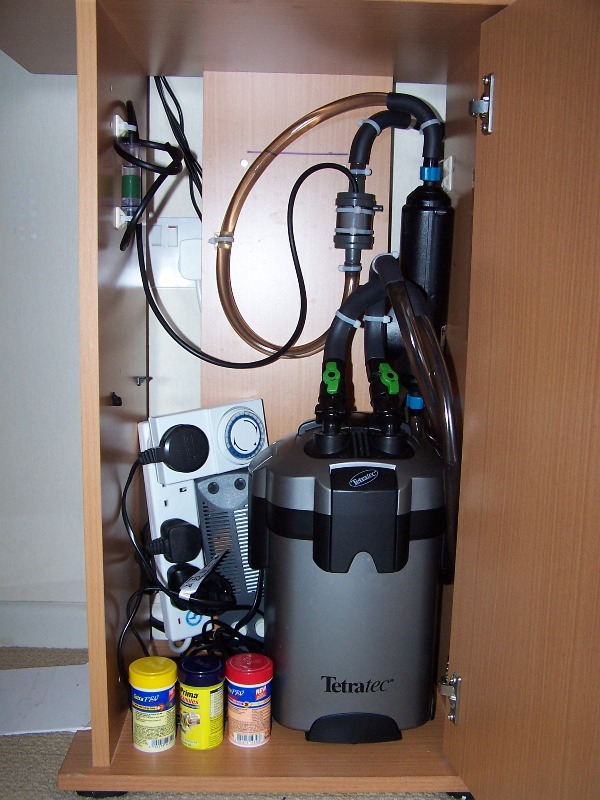 Her's mine although I haven't finished it yet. Got to put a shelf or 2 in and am holding off that until I decide wether or not to go onto FE instead of the disposables.

If you look closely on the right you can just see a 'cutout' hole in the top of the cabinet there is one both sides and are about 2cm wide by 15cm (front to back.) When I first made it my wife said 'Why does it need handles

. I cut one both sides so that I can have pipework going in whichever side I want (which may of course change from scape to scape ) 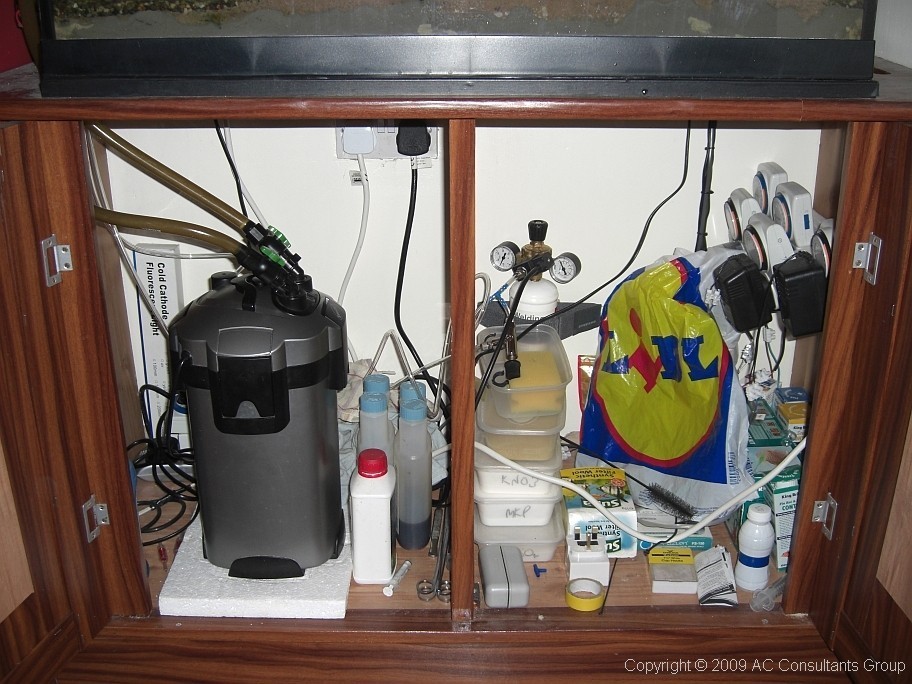 i went to take a photo of mine, discovered my 405 had sprung a leak and have spent the last 2 hours fixing it with silicon sealant.

I'm going to bed, but thanks for making me look!!

Anyone remember seeing a snap shot of Ed Seeley's setup a couple of months ago? I can't remember the thread it was on, but he did say something along the lines of he would post more detailed pics once he got it tidied up. He's got tons of equipment

Where are they now Ed?
Kind regards 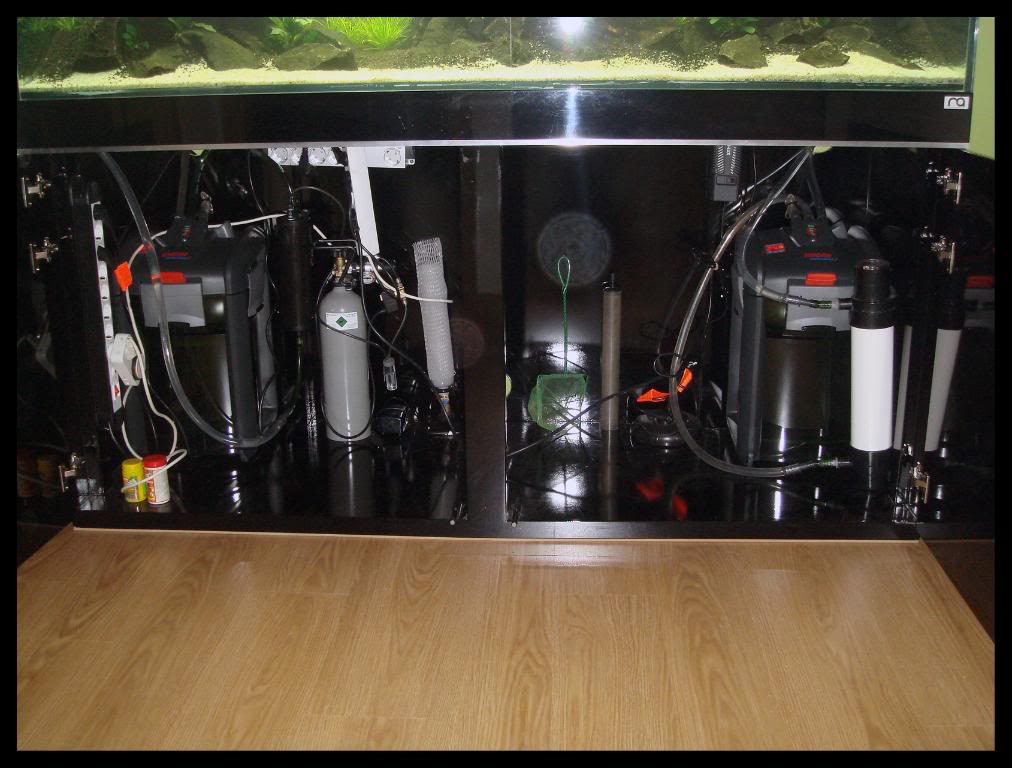 Pan the camera up, Paulo!

Hope he doesn't mind its only been recently setup! 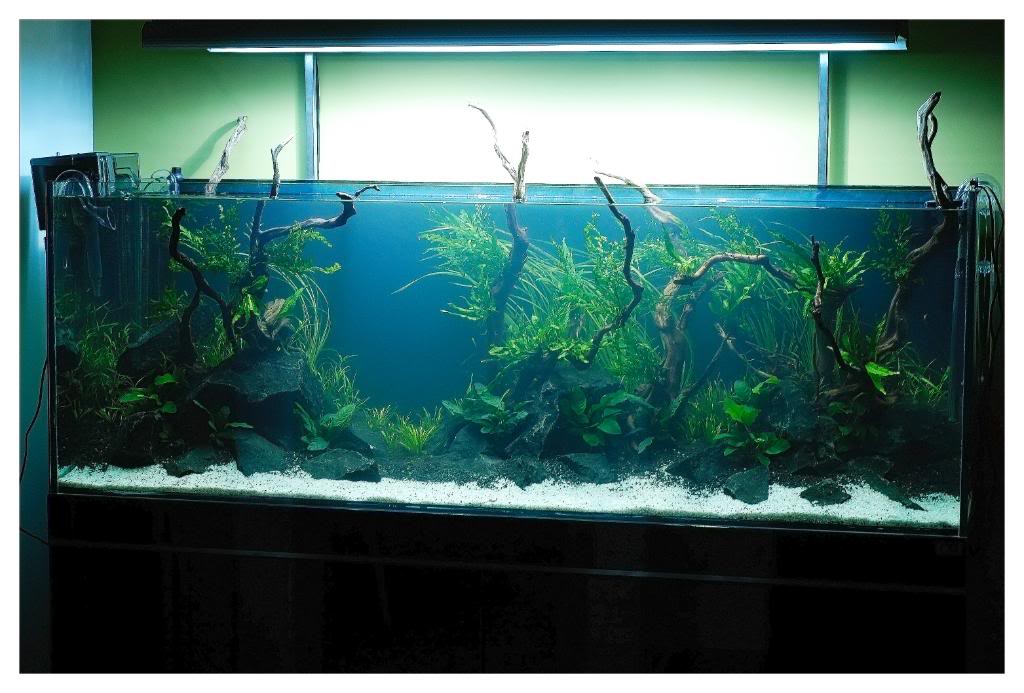 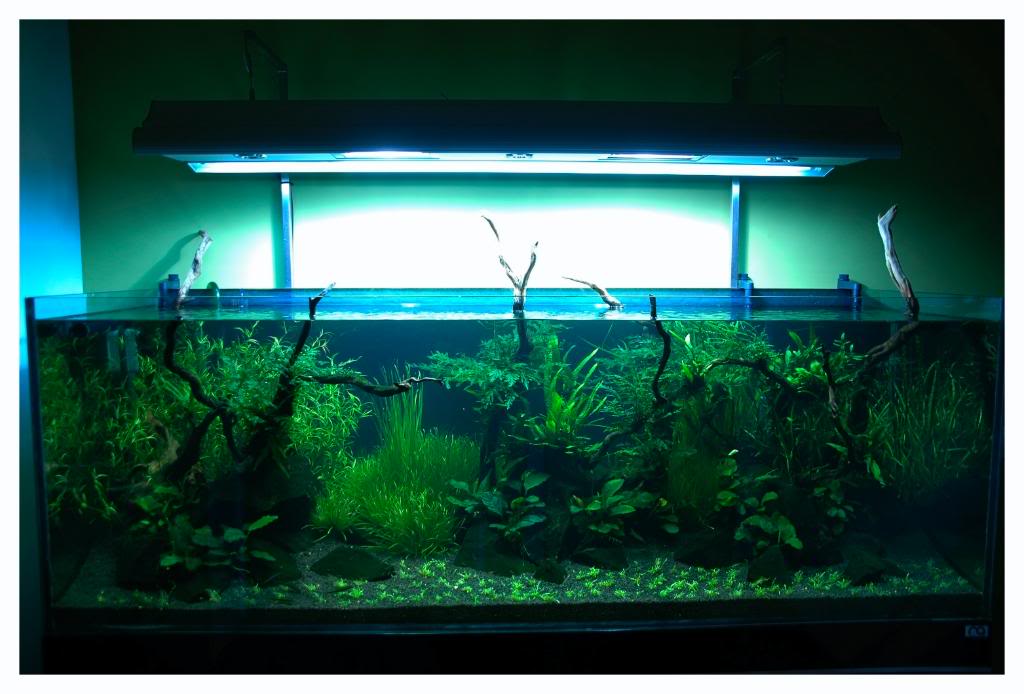 Thats a stunner of a tank right there! Love it
My Flickr

Get William on board, I say!

George Farmer said:
Get William on board, I say!
Click to expand...

Very natural looking, I like it a lot! Rather atmospheric to look at.
120 Litre Juwel Primo LED

Brilliant thread, I really like William's setup and tank.

its actually quite good looking at poeples cabinets. id post mine but i dont have my tank running yet

http://www.ukaps.org/forum/viewtopic.php?f=35&t=9067&start=70
60cm NA aquarium
You must log in or register to reply here.
Similar threads