P.S.
- for the nicer appearance, I really recommend doing a mix of species, incorporating ex. Tillandsia cyanea and ionantha, Neoregelia, Gusmania and some of the smaller leaf-cacti ( Rhipsalis )that are mostly hanging.....you'll then have same effect as in your Wabi Cusas - a lot more natural and nice to look at !!

Michael W said:
Do you give the Dendrobium Kingianum a winter rest? As in water less frequently in a cooler room? I often hear that helps with flowering as over watering during the winter months can cause keikis to form instead of flowers. The keikis on the pseudobulbs shouldn't present any problems unless the pseudobulbs supporting the keiks look stressed, keikis on the canes will still flower as do the mother canes so they will look awesome. You can remove them and pot them up separately though.
Click to expand...

Thanks for the tip Michael, i didnt realise they needed a rest from watering. How long should you refrain from watering for?
M

Well I wouldn't refrain from watering totally but I'd suggest maybe water it once a week or two, I don't have a lot of experience with this plant as I have not had it for a long time from Darrel. You want to observe the canes and if they start to shrivel then give it a light watering. In my opinion, the cooler temperature is more important than watering less.

I mist my Den. Kingianum roots once a week since they do not have roots growing in the medium but they have a lot of air roots.
Not the best looking aquariums as I'm still a novice in keeping aquatic plants but I hope yous can follow my progress,
cheers,
Michael.
Low Tech 30L Betta aquarium
Low Tech 30L Shrimp aquarium
Orchids

Hi all,
Michael's sounds like a viable approach. I've actually found that Dendrobium kingianum types are incredibly tolerant of drought, you can not water them for weeks at time (even in the summer) without any damage.

I usually check all the house plants on Saturdays mornings (after I've changes the tank water). I just lift each pot up, if its light I give the plants a water, if its heavy I don't.

I think most orchids with pseudobulbs are much more likely to be damaged by over-watering, rather than under-watering. The problem with Orchids is that because they grow slowly, and have long lived leaves, often by the time they show signs of distress it is too late to do anything about it.

The only orchid I don't water at all in the winter is a deciduous Pleione (grex "Vesuvius"), that lives in our porch (just about frost free and NW facing). This doesn't get any water from November through to March.

Nice one, Ulla
I've got pure white, chocolate striped and dark rosy Paphiophedilum's .......but no idea of species or type, unfortunately.
- Quite easy orchids to grow and flowering like a clockwork !
I used to have some named species (ex. liemianum), but they've not accepted neglect as well as the three survivors.
Last edited: 23 Jan 2015

I agree, also have two in my viv but they have refused to bloom yet. Maybe too dark :/

Mine doesn't tolerate too much light - and defenite not direct sun. They live in a westfacing window in winter and move to a northfacing one in summer. They all tend to bloom here in very late december or during january, this way.

Hi all,
A few more that I took yesterday while I was trying to work out what was wrong with an IPAD.

This is a small flowered pink Cymbidium. I had a huge plant that I hacked into bits about 4 years ago this was the central section and it was mainly very old pseudobulbs.

The plant next to it is Dendrobium x delicatum, it doesn't flower very well now, but it does produce a lot of keikis, possibly because we use this shower more now than we used to. 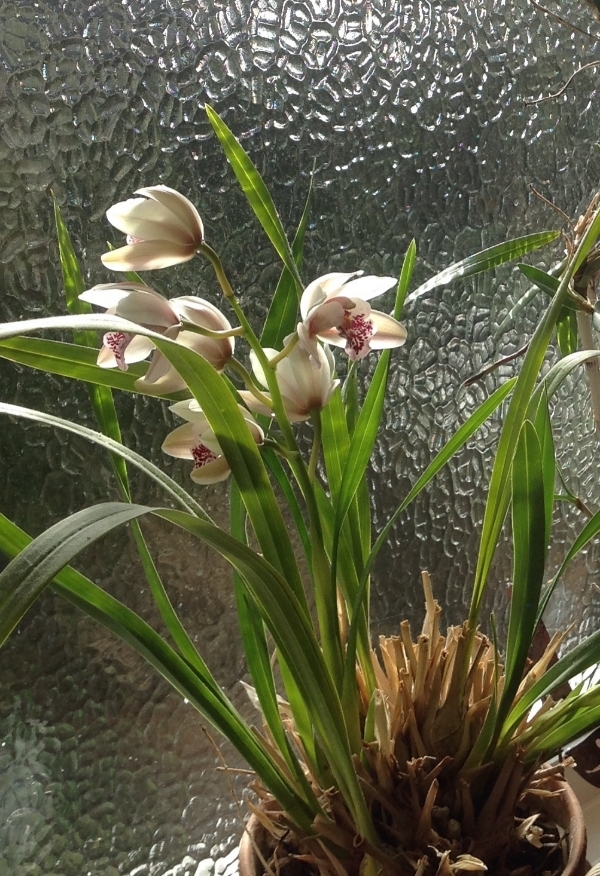 This one isn't an orchid, it is a <"Eucharis">, but it lives in the same bathroom. I'll find it had 4 flower scapes in the autumn, but even if it didn't have a great flower it is worth its place as a foliage plant. It is over a metre across. I bought it remaindered for £5 a few years ago, and it hovered between life and death for about 6 months before growing. 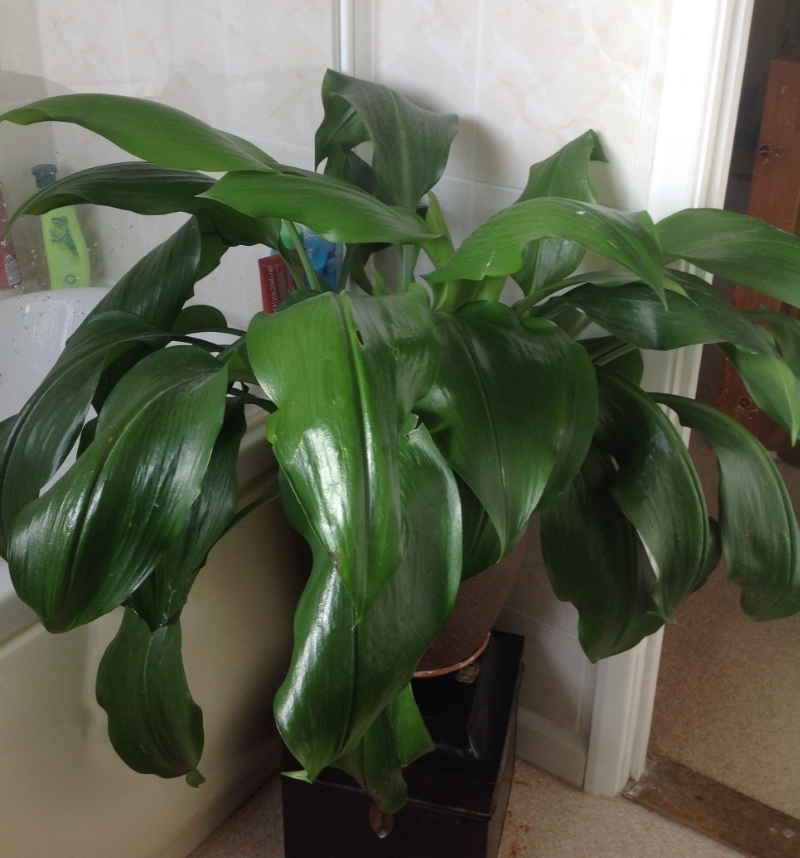 This one is the Coelogyne cristata from earlier in the thread. I'll divide it later in the year (and re-pot the Phalaenopsis) 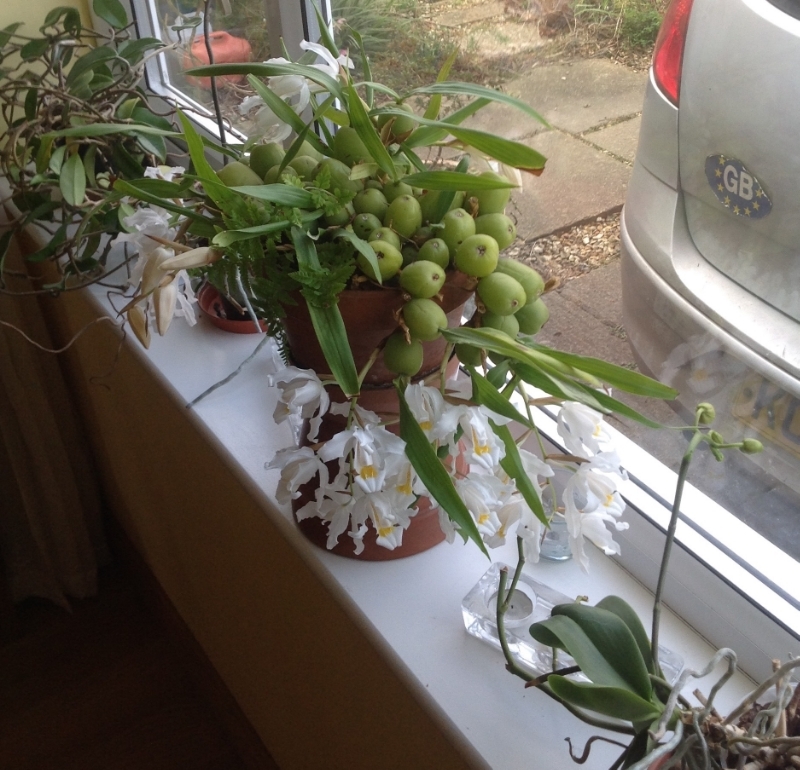 Last one is also cheating, because the flower is a double white "Florist's" Azalea, but the orchid is in the pot next to it. I'll take the same photo later in the spring, and hopefully things will look a lot different. 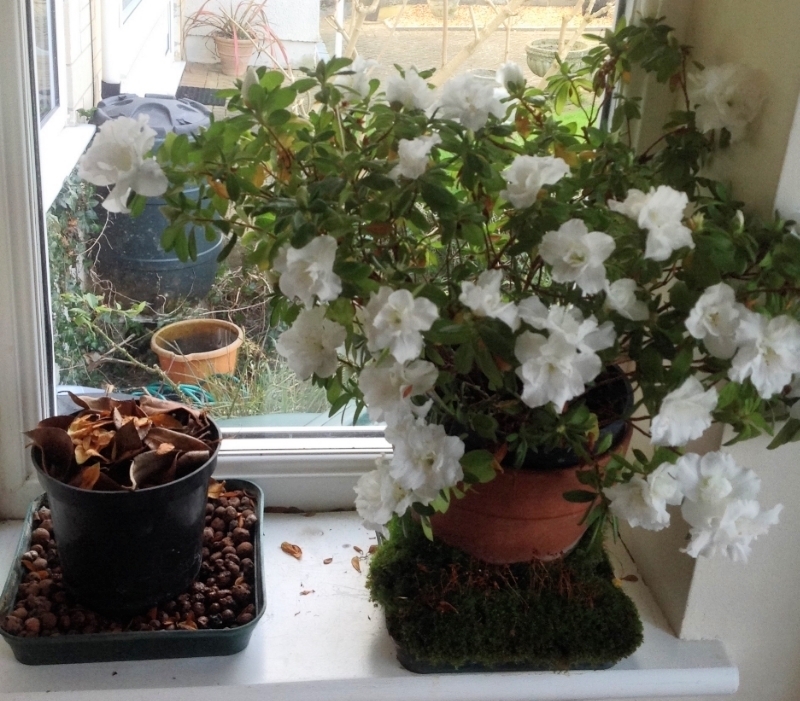 Hi all,
I'll have another go at posting the Dendrobium x delicatum picture. 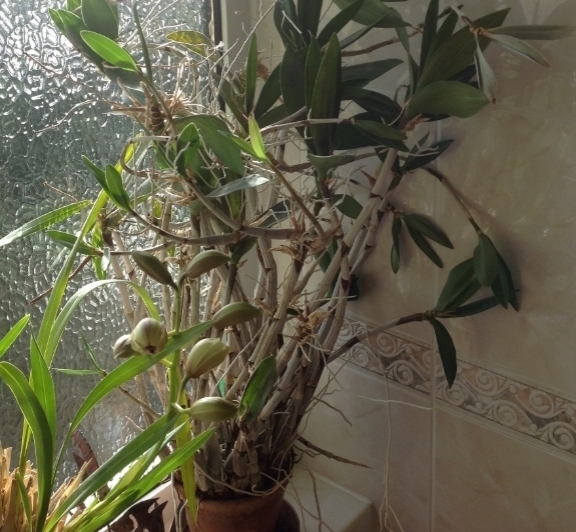 Its been a while since I've been online due to uni. I've not got any pictures but I should have some coming up this week. My Coelogyne Cristata and Dendrobium Kingianum from Darrel has started to produce a new growth which I'm very looking forward to. The rescue Cattleya is also starting to send out new growth and roots, I'm really looking forward for this one as I have no idea what the blooms look like. I am also expecting a new plant this week, it will be a Maxillaria Rufescens, I believe it has been renamed but I forgot what it is.
Not the best looking aquariums as I'm still a novice in keeping aquatic plants but I hope yous can follow my progress,
cheers,
Michael.
Low Tech 30L Betta aquarium
Low Tech 30L Shrimp aquarium
Orchids

Hi all,
I've found a smaller plant of Dendrobium x delicatum in the glasshouse at work. It is definitely a cold hardy orchid because the power went off over Xmas and we had several nights at, or just below, freezing.

Since it has been in the computer room I've noticed it has a really sweet scent, presumably mainly at night. 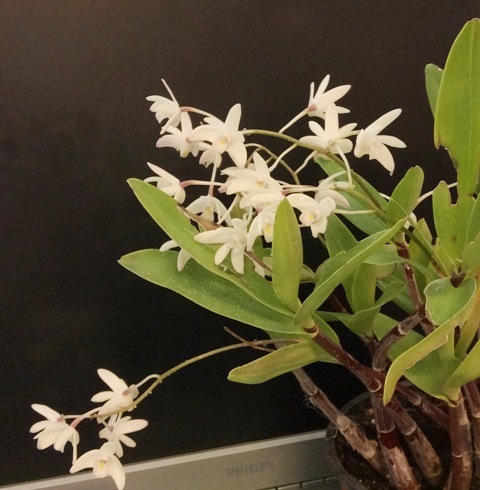 Ever wondered why it's named "delicatum", Darrel ??

Mick.Dk said:
Ever wondered why it's named "delicatum", Darrel ??
Click to expand...

I'd assumed it was the colour, but it could just as easily be the scent.

I don't think D. kingianum is scented, so presumably the scent comes from the other parent D. speciosum (D. tarberi)?Because it is white and scented at night I'd assume that D. speciosum is moth pollinated.

Id like to get a small orchid with a nice smell. Do you guys recommend something? Remember it has to be small preferably.

Jose said:
Id like to get a small orchid with a nice smell. Do you guys recommend something? Remember it has to be small preferably.
Click to expand...

Oncidium (Cambria) "Twinkle" is fragrant, easy to obtain, good houseplant and fairly small. "Twinkle" is a "grex", so they come in a range of colours.

Thanks Darrel. Ill see if I can find it somewhere near.

I don't own one but I do believe the Encyclia/Prosthechea Lancifolia has an amazing fragrance. I was going to get the Max. Rufescens but I've decided on getting the Max. Tenuifolia which smells of coconut. I'll wait till after next week before placing an order as there will be an orchid show in Durham which I'll attend to see if I can get one there first(delivery is nearly as costly as the orchid itself).
Not the best looking aquariums as I'm still a novice in keeping aquatic plants but I hope yous can follow my progress,
cheers,
Michael.
Low Tech 30L Betta aquarium
Low Tech 30L Shrimp aquarium
Orchids
M

The orchid show at Durham was stunning, it was the first show I've been to, hopefully there will be more around me that I can attend to when it's not on a day where I have to go to uni. Here are some photos, I don't have the names at hand but I have taken pictures of their tags, I you're interested in a particular plant and its name I'll try and find it. 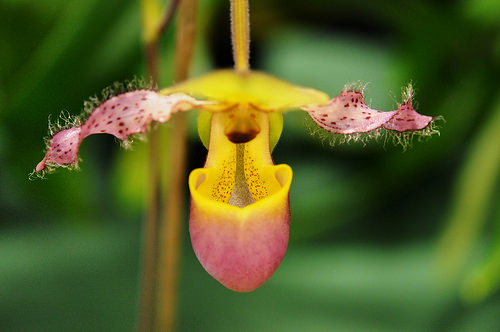 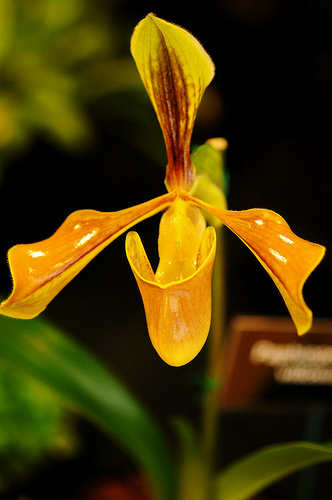 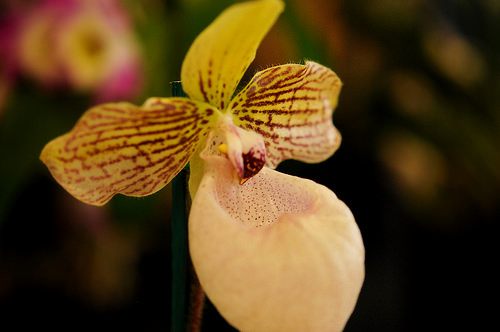 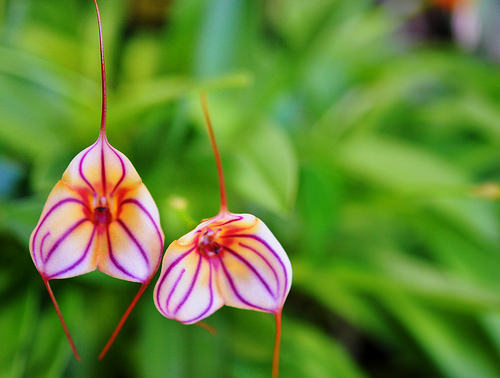 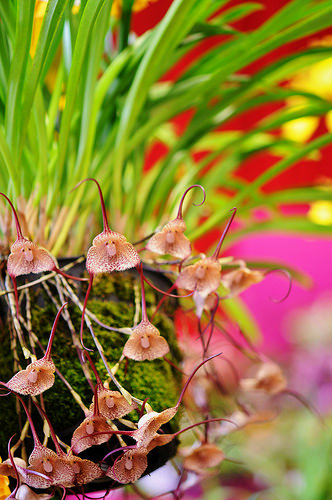 Here is an orchid with an amazing scent, Prosthechea Cochleata 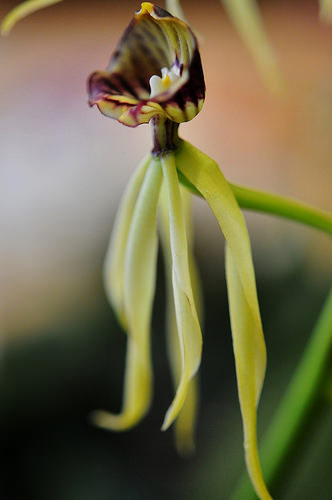 Here is group of Pleiones 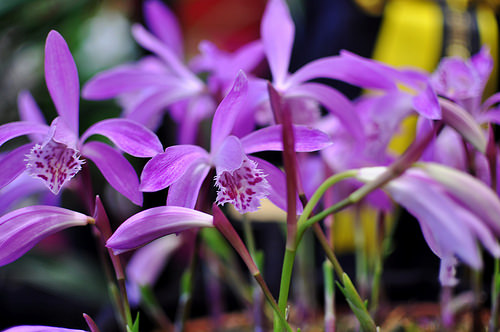 I did buy 2 orchids and they are Neofinetia Falcata and Coelogynes Fimbriata. However, there seem to be some problems with the N. Falcata since I got it, some leaves are turning yellow and brown which is rather worrying. Good job I have both plants in one of the bathrooms since I got them home. I'll have to observe both of them as I am scared that it is a virus, in which case it is incurable. It will be a real shame as I spent over 30 quid for the two, the N. Falcata was 25 .
There won't be a sure way to know if it is a virus or not without testing. Fingers crossed.