How many dwarf shrimp could I safely add simultaneously to my tank?
I was hoping to go for around 30 or 40 shrimp in one go. (am getting them mail order from Germany, so do not want to pay shipping more than once)
Also, what size dwarf shrimp population can my tank handle?

Then I can start thinking about what species to get am currently planning on getting them from here: http://www.1a-wirbellose.de/invertebrate-shrimp.php

Cheers Paulo, that is good to hear. 500 is a silly amount! How many did you start with, and how long before they reached 500?

Now the fun bit, what species and how many....

I think 10 of each species, with 3 species in total. That is a good balance between having enough to start a breeding population and not breaking the bank.

Then again maybe 15 of just two different species to be on the safe side from the breeding perspective.

Opinions greatfully received on the numbers!

As to which ones... ....
Definitely some snowballs (or white cherry shrimp as I think of them

)
Then maybe some marble dwarfs and\or some sri lankan dwarfs.
Would really like some of the cheap tigers or CRS but they do not have those in stock, could always source those in England at a later date though.

I started with 20 cherries and after 6-7 months had that silly number!!

Becarefull which species you want to keep as some can cross breed and that is not recommened, you will get some odd looking off spring.

look at the chat bellow: 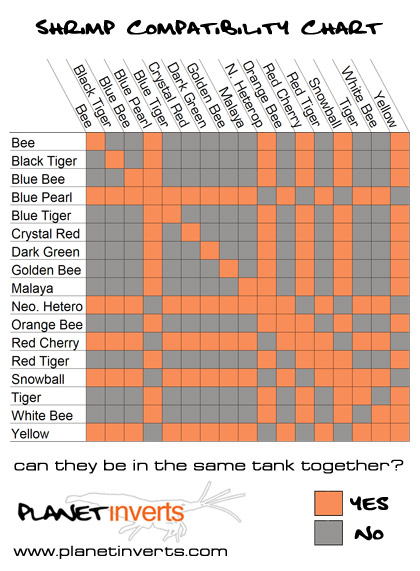 I might be getting rid of my lower grade CRS if you interested! I have 10, but I am not sure yet so let me know and I will reserve them for you.

I am interested in your lower grade CRS, please reserve them for me. It is no problem that you do not know yet. Just let me know when you do. I never do anything in a hurry if I can help it!

I will definitely not put any shrimp in that could cross breed... I''ll check that thoroughly before any purchase.

Although I am not in it for the money, a part of me is tempted to just buy 30 snowballs so the population explodes quicker, then put them on ebay, and reinvest the money in other species.

Given how good they look, it is tempting to go straight for some high grade shrimp. But without any prior experience I think it would be a bit risky.

I decided on my shrimp at last, I am going for:

I chose them as they are both 'easy, beginner shrimp' that will breed in freshwater and will not hybridise with each other.
They are ordered and paid for and due to arrive around the end of next week.

I am very excited!

Well I was all set to get them from Germany. Then I had a look on aquabid and saw the exact same shrimp I was going to get and in the same quantities, but cheaper, from a hobbyist in Spain. So had a last minute change of heart and got them there instead.

I know Ade\Wolfenrook has used them a few times. From lurking on his UK shrimp forum I surmise that overall he was really pleased - although one time it looks like they sent him the wrong shrimp.

If mine breed and I can successfully raise the shrimplets into shrimps then I will happily sort you out with some. That would be a few months down the line though.

If you do not mind me asking, what shrimp was you eying up?
If it was the blue tigers then I might end up getting some off of you instead of vice versa

Interaquaristik have got some nice mandarin shrimp, I was tempted to get those instead of snowballs, but they say their colour fades in alkali water so that put me off... http://www.interaquaristik.de/aquaristi ... 190-1.html

the thing that the pictures do not take into consideration is the size!

They all look the same size in pics.

I saw cherries in photos many times before seeing them in real life, so was expecting them to look like Amanos, but as we know they are about half the size.

Sri Lankans are even smaller than cherries.

Sorry if you had that in mind already
You must log in or register to reply here.
Similar threads