Thread starter
I've now ordered 50 cobombas, 10 more large bylxas, 5 more blyxa japonica and some more HC, will photograph when in place. I hope to move my 2 clowns and the red eye tetras in soon. I'm holding onto these fish in the other tank because I've had a fungal outbreak that claimed the lives of 3 of the red eye tetras when they were in the main tank and I want to isolate them to make sure I did get rid of it, I really don't like losing fish.

Out of interest james, what chemicals do you use and how does one obtain them, I take it that they are difficult to obtain but not dangerous to handle?

sks said:
Out of interest james, what chemicals do you use and how does one obtain them, I take it that they are difficult to obtain but not dangerous to handle?
Click to expand...

If you look at my PMDD page you'll see what they are. Perfectly safe and found in most soft drinks that you can buy. Luckily I have access to a lot of chemicals so I've never tried to buy them. Not the thing people want to buy, except if you're a drink or food manucturer, which is why they may be hard to find.

JamesC said:
If you look at my PMDD page you'll see what they are. Perfectly safe and found in most soft drinks that you can buy. Luckily I have access to a lot of chemicals so I've never tried to buy them. Not the thing people want to buy, except if you're a drink or food manucturer, which is why they may be hard to find.

erm, I looked at the page and they are not there? By the way, are you a chemist by profession? I was never good at chemistry although I might take that up if certain things go to plan this year.

Thread starter
and out of interest where does one obtain these additives? Is Ascorbic Acid always supplied in a harmless concentration (like vinegar)?

If I can help it, I don't want anything professionally to do with computers ever again.

Ascorbic acid is Vitamin C which I have in powder form. Think you might be able to buy it at the supermarket or chemist.
The potasium sorbate I have looks like small pellets. No idea where it is for general sale though. You could instead use E218 Methyl Paraben but this may also be difficult to buy.

Thread starter
looks like http://www.arndaleingredients.com/Products.html do them. It might be helpful if you could update your PMDD page to include information how you managed to get all the chemicals in one and what role these chemicals play in preventing the reaction.

Terribly sorry James, got the wrong end of the stick. I though you got the micros and the macros together, but you were just referring to being able to keep the micros without refrigeration. So I will be using 2 dosing pumps after all.

All I can do now is await the new plants. I will not dose for 2 days since this will effectively halve the dosage since I've been dosing for 2 days at full dosage.

sks said:
Terribly sorry James, got the wrong end of the stick. I though you got the micros and the macros together, but you were just referring to being able to keep the micros without refrigeration. So I will be using 2 dosing pumps after all.
Click to expand...

You had it right to start with. I do mix them all together. I am still basically testing it which is why I've not really mentioned it before. Updated my webpage - http://www.theplantedtank.co.uk/allinone.htm

Thread starter
that great then James, only one dosing pump for me.

Thread starter
yes, and that's what I ordered. I first assumed they wrote it wrong (it's in a self sealed bag with black permanent marker reading K2PO4), so I can only assume that they meant KH2PO4.
S

Thread starter
new plants arrived today, this time the Blyxa did not melt much, so are superb, especially the larger Blyxa species, can definitely recommend Greenline where I got them from.

I have some slight algae appearing also, unfortunately my rubbish digital camera cannot capture them so I'll have to revert to description and ask for help from you as how to best deal with them. The clown loaches and the red eyed tetras are coming back into the tank tonight.

Greenline are very good and have used several times. How big are your clown loach? They have a bad reputation of wrecking planted tanks. Sometimes you get lucky though.

Thread starter
my clowns are just babies, about 2 inches at most. Need to have them around anyway in case of snails.
S

Thread starter
here is the tank one week after set up. Unfortunately the new bunch of HC did not make it, I opened the pot and found a worm in the wool and freaked out, dumping the whole thing in the toilet and flushed it away.

The cabomba and the Blyxas did make it and here are the results: 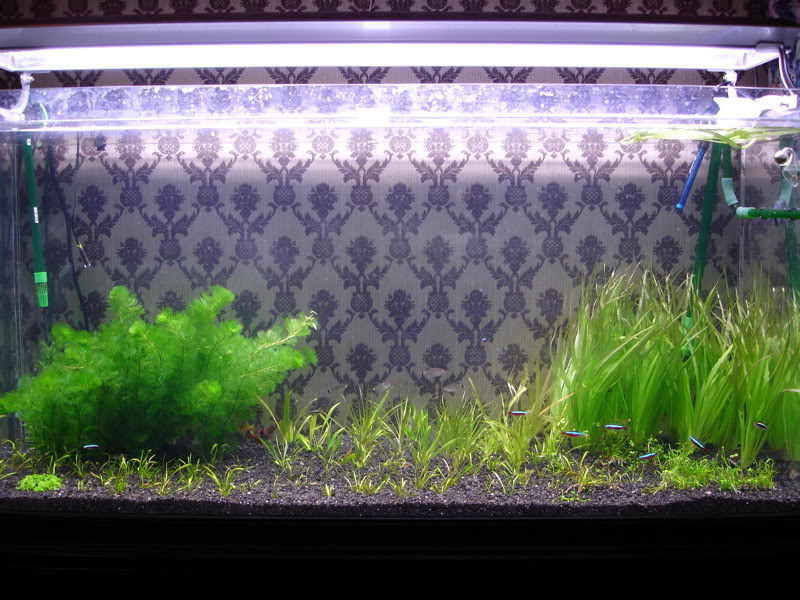 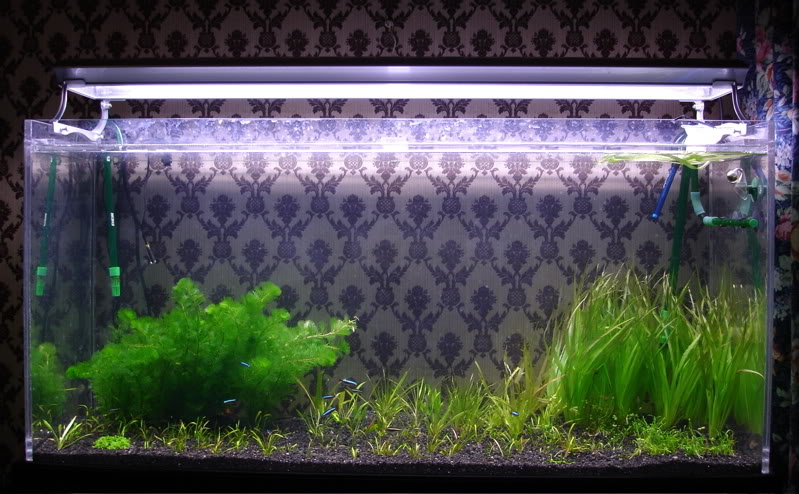 I also have what appears to be the start of GDA appearing on the front, I can tell by viewing lengthwise from the side of the tank, there are other algae coming and I would very much appreciate any advice people can give. Lighting is 10 hours a day (10 am - 8 pm).

I only have one otto sucker and one gara. I'd very much like to get some amano shrimp and have heard that one user here keep them with clown loaches, is this possible?
C

I wouldnt recomend keeping the 2 together whilst the clowns are very small the amanos might have a chance of escape but with no hardscape for the shrimp to hide under they are more than likely to become lunch.

controling snails is easy without the need for loaches, just control the amount of available food there is for them but careful feeding of your fish and removing organic waste, then snails will not be an issue.
growing algae since 1982
S

this brings my algae eating population to 1 garra (which looks like a SAE except for the skin colouration and head), 7 SAEs (all babies) and 9 ottos.

I'm starting to get good pearling around lights off time, but there appears to be a golden cloudiness that seems to be taking over, anyone can tell me what it is. I've switched over to PMDD normal lights according to JamesC and am wondering if it's the traces elements causing the cloudiness.
S

This is the tank at the present state: 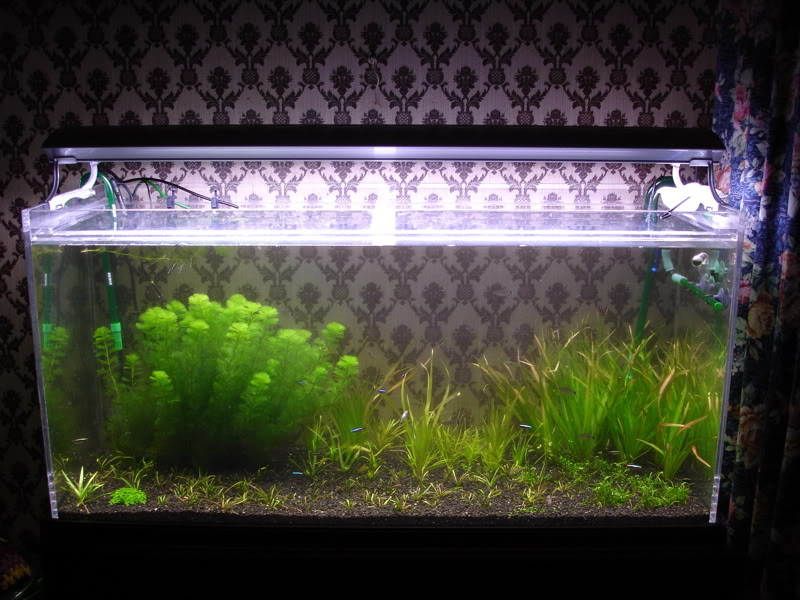 This photo is not actually right since the background light was due to the flash, the first photo is more realistic: 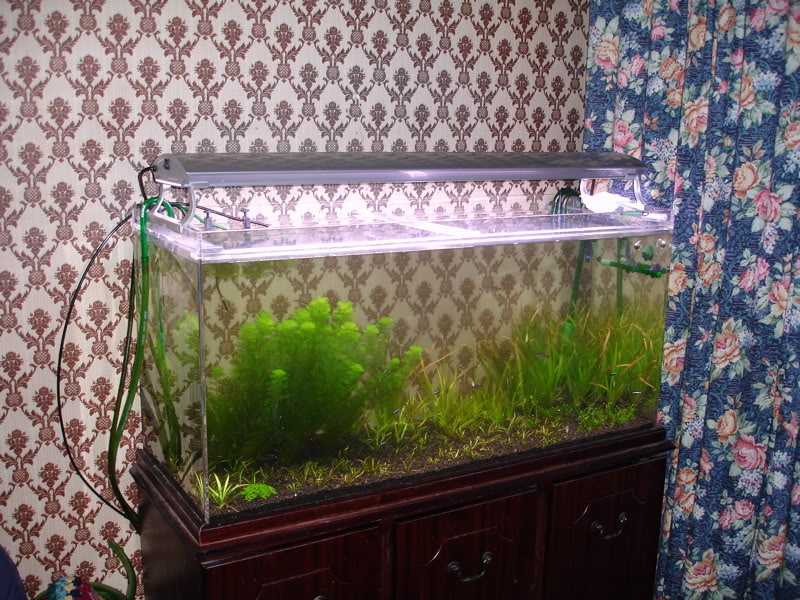 A closer look at the Blyxas, terrible photo I know, but they seem to be growing newer leaves but not as large as the old ones what that slowly turning red and some melting and breaking off. 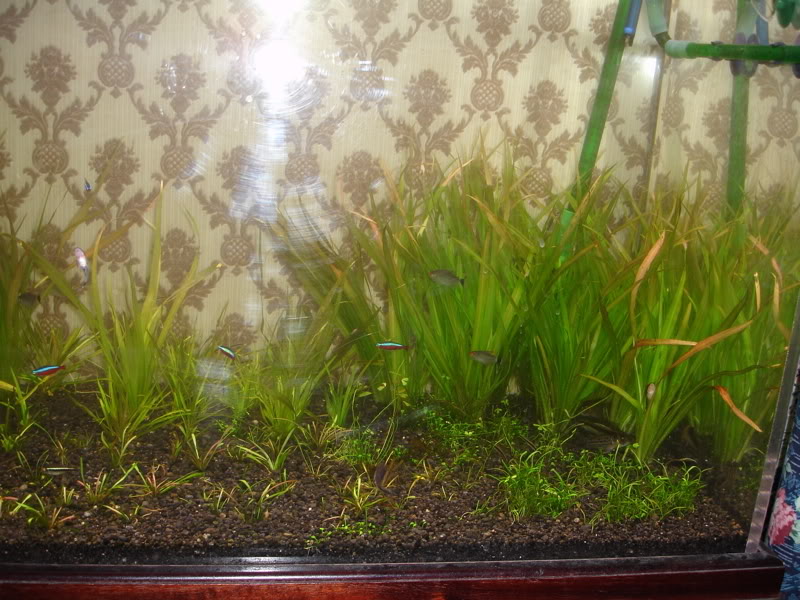 This is a Aqua Medic dosing pump in place, it doses the ferts and is on for only one minute a day, and in that one minute it pumps about 55ml, this makes things awkward since I only need to dose about 15ml of JamesC's formula so I have to ratio it up and dilute solution to 2 litres. 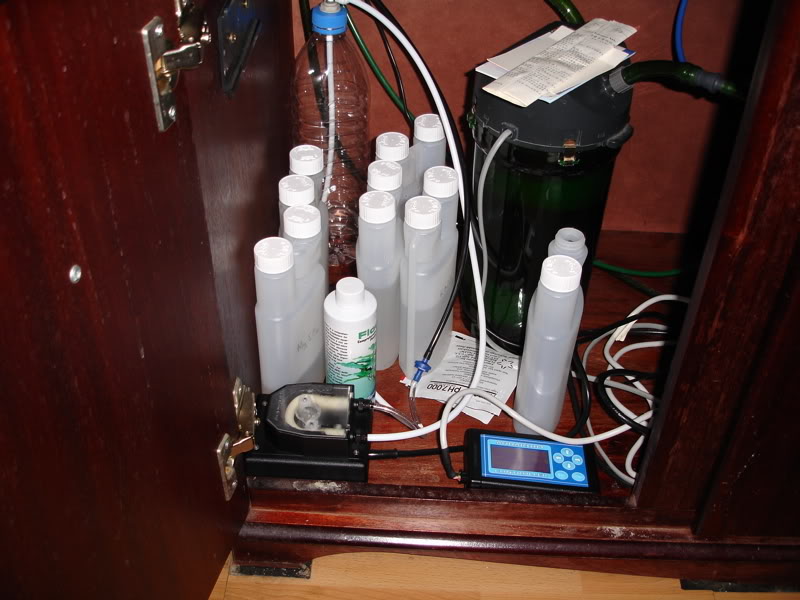 this is the HC clump in that tank that I've been monitoring, again sorry for the horrible photos, but you can see how it first started out and how much it has done in 2 weeks of growth: 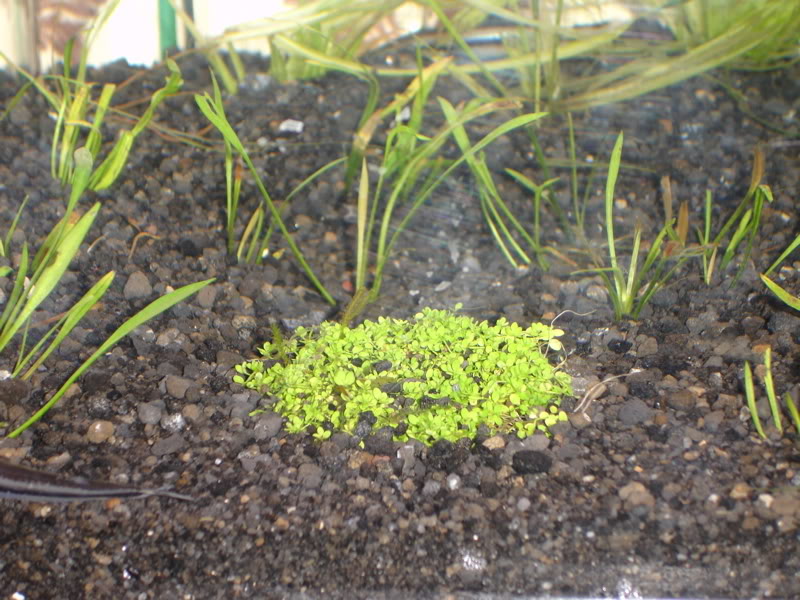 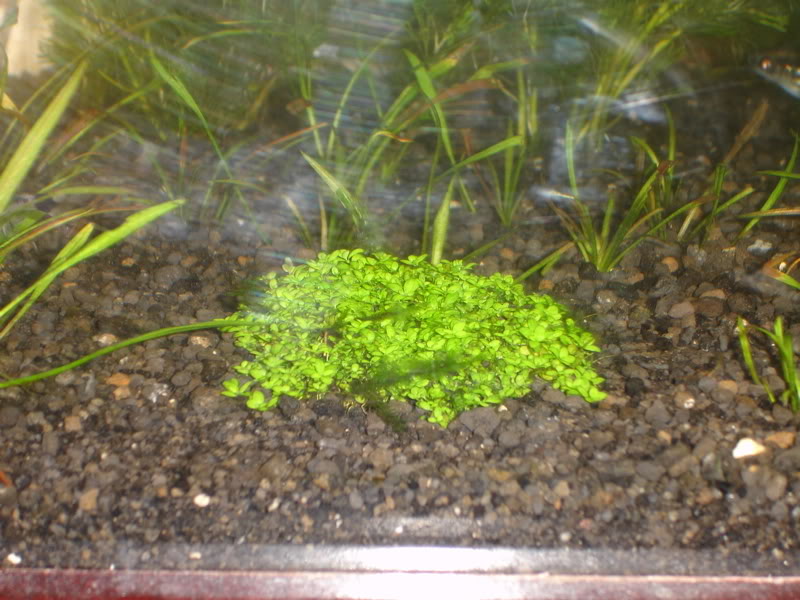 The problems I've been getting are:

1) water was cloudy from sunday to thursday this week, but somehow it's clearing now
2) some thread algae on the tennelus at the front, but the other plants don't seem to be suffering from it much
3) there is some slight GSA on the glass but nothing major, JamesC reported GSA with his dosing too
4) a silvery film appears on the water surface and it seems to be getting thinner now. I could reinstate the Eheim surface extractor but I really don't want to.
5) I don't know if the GDA will return on the glass, I hope not, it doesn't appear to be as strong coming back as last time, probably due to water cloudiness during the week

Apart from that everything is fine, and the otts and SAEs are doing a first rate job. My garra unfortunately doesn't seem to want to do anything.
S

Managed to get a digital SLR and a macro lens, so the photos are a whole lot better now. Still need some messing around, and not being a professional photographer these are the best I could do. 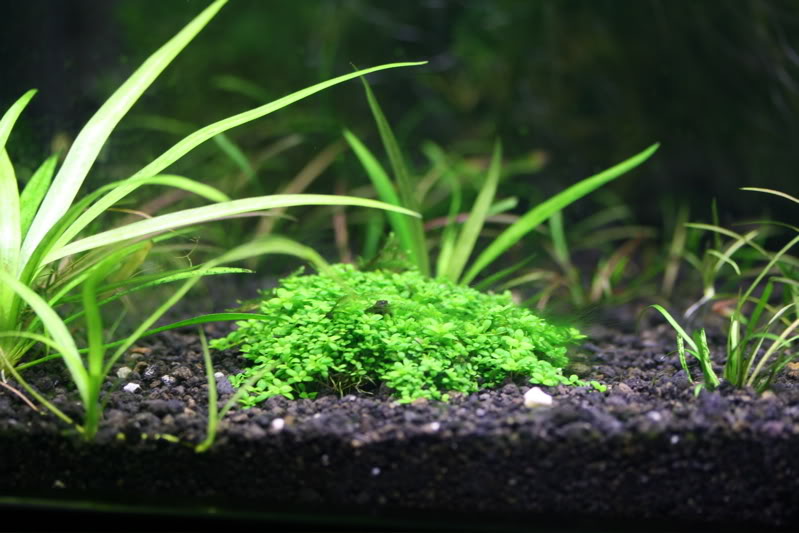 Viewed from above, the band is actually the edge of the brace of the acrylic tank: 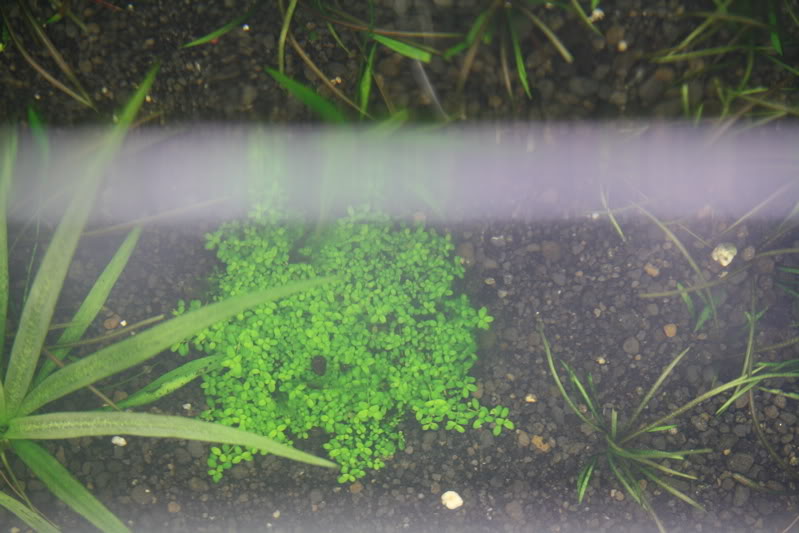 as you can see hair algae is starting to grow on it, but not too much, and the HC is starting to branch out. I have a feeling that since there are a lot of plants in this clump the growth rate will out run the algae. Also Excel is being dosed as of yesterday

This is my Corydoras Robustus, still not breed in captivity, hence the price is quite high for it, it is also one of the large Corydoras species. This one appears to be a female. You can see the GSA obscuring the view 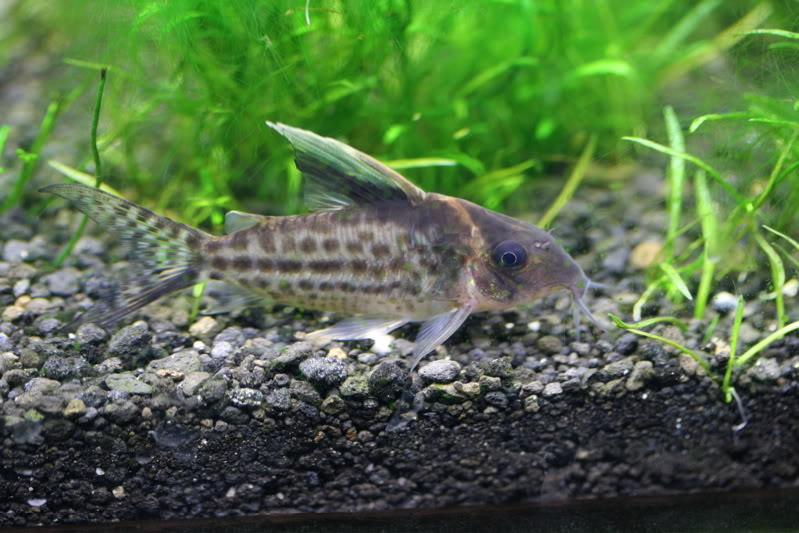 This is the pearling of the cabomba, in a mere 2 weeks they have doubles their length: 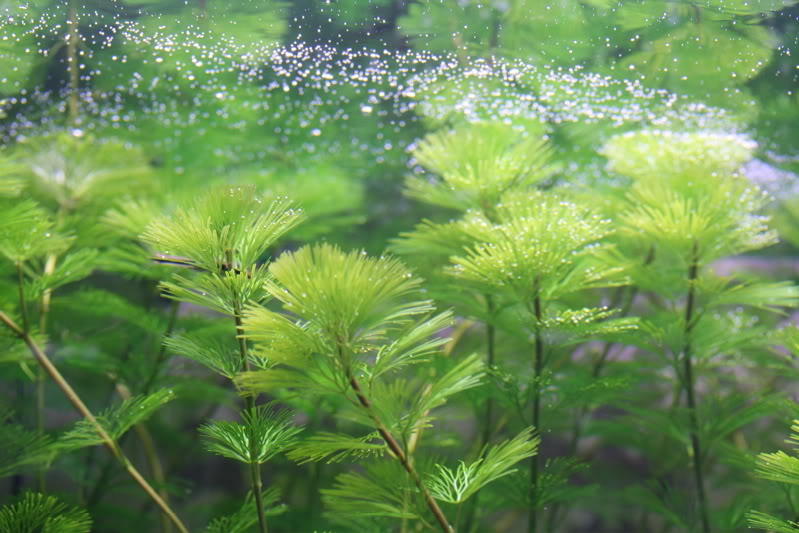 The following photos shows me trying to stalk my SAE, still a baby - they're much more eager to do their work at this size: 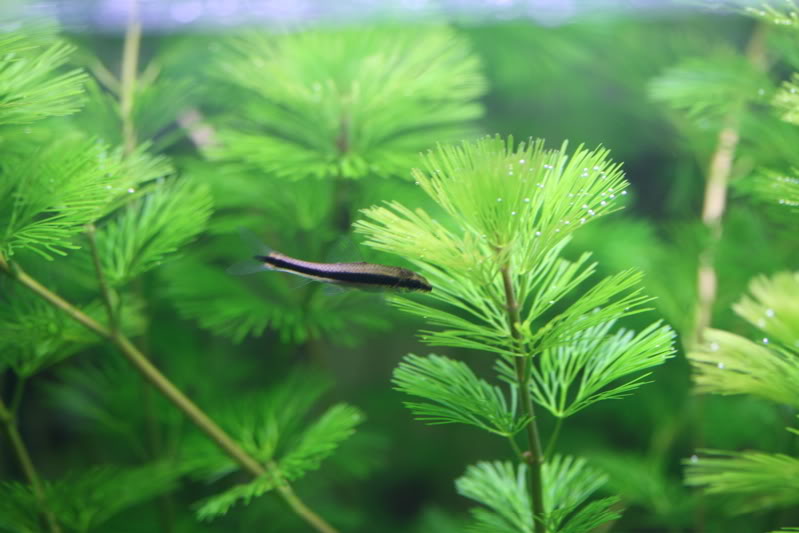 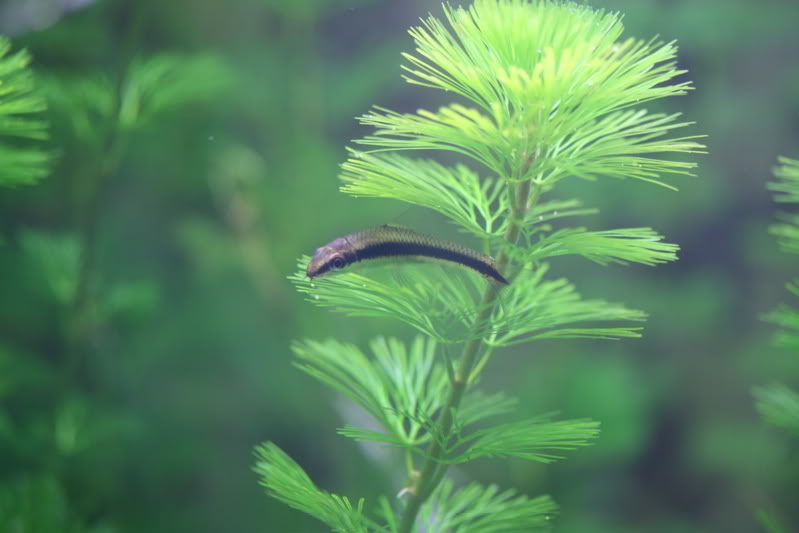 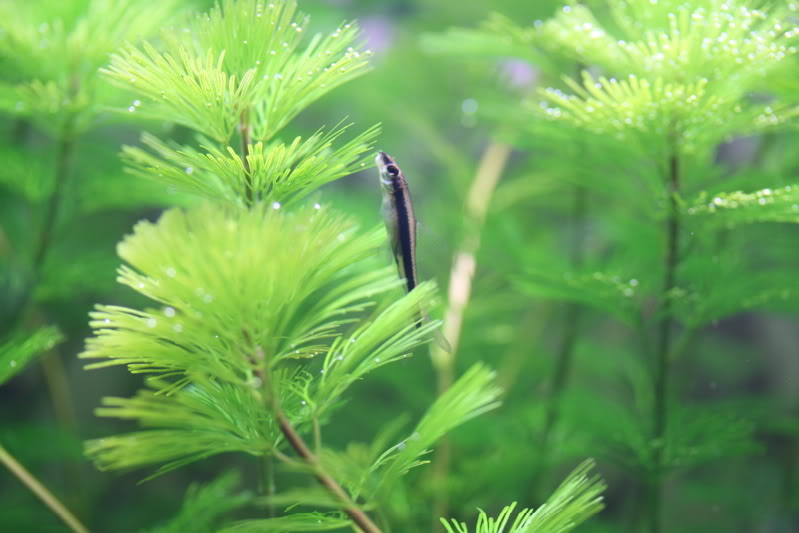 Thread starter
As of 29/01/08 I've made 5 litres of JamesC PMDD with the trace. This is now attached to the Aqua Medic dosing pump which doses the mixture at 9 am in the morning (lights go on at 10 am). The 5 litres should last over 180 days (almost half a year!!) which means in that time all I do is:

1) make water changes weekly (no need to do 50%)
2) trim the cabomba (and possibly get it out when I don't need it)
3) check on fish health
4) discard dead leaves and plant matter before they rot away in the tank
You must log in or register to reply here.
Similar threads