Has anyone had this experience with Sparkling Gourami? Scroll down to the bottom of this page to find out what I'm on about: http://www.seriouslyfish.com/species/trichopsis-pumila/
.
Aquazeitgeist. YouTube
A Brief and Incomplete History of Aquascaping. Soil Substrate Planted Tank - A How to Guide
Schism Reimagined. NatureScape. Return of the Shallow. Windswept Eternity, Primordial. The Dark Side or What Lurks Beneath

Mine are fine with my small amanos but I can't say in regards to smaller shrimp. As for aggression I've found them very timid. Currently my pair are constantly hiding from a shoal of lamp eyes

you need to add a few more pumila to your group, then you should see less defensive behaviour. great little fish.
darren reserves the right to go off-topic

Need to be in a good sized group, IME they can be agressive to tankmates. And they will take shrimplets and stalk small cherry shrimp
Meander, Titans, Sea of Ferns, Counted Sorrows
Experimentation is the key to growth - Pardeep

I've kept a pair in a 25l tank with a few adult cherries without issue. However, when I had Caridinia simoni simoni in with them, they would predate the eggs while the females were still carrying them, and I never had a single shrimplet survive.
Poco Pozo
Bucket O' Mud
Landscape Photography​

Interesting experiences. I had a group of 6 and they were all feisty little characters even though they were minute; there was nothing defensive about their behavior. :idea: One of the theories I have read that may explain aquarists differing experiences is that there are two or more species with very similar eidonomy or external morphology, but obviously different behavioral characteristics :?:
.
Aquazeitgeist. YouTube
A Brief and Incomplete History of Aquascaping. Soil Substrate Planted Tank - A How to Guide
Schism Reimagined. NatureScape. Return of the Shallow. Windswept Eternity, Primordial. The Dark Side or What Lurks Beneath

maybe pockets of the wild population have different behaviours?
darren reserves the right to go off-topic

I had a pair in a 12l nano. Slaughtered my c. meridonalis. Watched one time as the male took the head off an adult shrimp. Beautiful fish but after that I returned them. Wouldn't keep them with any shrimp, not even Amanos. There's a similar thread about this already:

hotweldfire said:
I had a pair in a 12l nano. Slaughtered my c. meridonalis. Watched one time as the male took the head off an adult shrimp. Beautiful fish but after that I returned them. Wouldn't keep them with any shrimp, not even Amanos. There's a similar thread about this already:

Thanks for that; yet more evidence of their polarized behavior. I went to my LFS yeasterday and they had the little blighters in a tank full of rili both seemed to be cohabiting quite peacfully...so go figure :!:

It would be fascinating to get to the bottom of why some have found them peaceful and timid whilst others have found them to be the complete opposite.
.
Aquazeitgeist. YouTube
A Brief and Incomplete History of Aquascaping. Soil Substrate Planted Tank - A How to Guide
Schism Reimagined. NatureScape. Return of the Shallow. Windswept Eternity, Primordial. The Dark Side or What Lurks Beneath

miniature psycho bullies, I bought a pair yesterday and watched them hassle everything that moved, me and my girlfriend watched them beat up an amano shrimp that was doing nothing wrong.

Since then all shrimp, cherries and amanos have downed tools and gone into hiding, bless em.

I have 5 in a 46l. Very peaceful and infact hide most of the time, they tend to come out more after a water change but never hastle any other fish.

They did, however, reap utter hell upon the nano shrimps I introduced. Hunted and killed them within a few days. I'd love to keep some nano shrimp too but ain't gonna risk it unless I can find a species the gouramis won't hunt.

I wouldn't get rid of the gouramis though. They're absolute gems and the croaking they do is pretty cool.

I have a trisome, 2 girls and a boy, cherry shrimps, a puffer, 7 highfin barbs and a bunch of boraras sp... All except the boraras i suspect to be shrimp hunters..
It's mainly the male pumila who's kinda behaiving territorial and beeing the rascal, occasionaly i see him haras a shrimp of it's own size but this realy is occasionaly and ussualy the shrimps are pretty fast and always escape.

I kinda antisipated to the possibility of baby shrimps beeing hunted and eaten and or maybe even some addult shrimps getting killed, so i made the setup like you did, with a very large piece of wood and made sure there is a rather large cave labyrinth bellow it. Constructed this with a few balls of panties filled with akadama bellow the wood as support and pilled up the substrate around it. Anyway it's going on for many months now and the theory seems to work, i threw in 30 cherry shrimp and they seem to breed fast enough to keep the population alive.. I still see addult shrimp also pregnant girls and baby shrimps comming.. I have no idea how many shrimps live in my cave labyrinth but they keep comming out. Also have 15 amano shrimps and i only see them rarely, they also are very fanatic miners and rather stay under the wood, i even see them shifting substrate around at the cave entrances. When i throw some cucumber into the tank it gets dragged into the caves to be never seen again..

I also see the pumilas d(r)ive in the cave, can't see what's going on, but i guess for hunting shrimplet burger.

For me the circle seems to be round and a goal achieved, do not have a massive amount of cherries but they breed fast enough to survive with a healthy population.
Cheers,
Marcel..
Tanks for watching.

As above, these guys demolished my shrimp population in no time, including shrimp that were as big as the gourami. They started off with juvies and ate all of those, then moved on to bigger shrimp.

Really pretty fish. Very intelligent. A real joy to watch them peeking into nooks and crannys chasing shrimp, so that was some consolation.

They are bold but if you don't give them lots of cover they'll be unhappy. I had a big group (species only tank) with lots of cover and they were out all day. I moved some to a tank with less cover (no other fish) and they never seemed happy.

The croaking noises are LOUD for such a tiny fish. Kind of like a cricket or grasshopper but only in very short bursts.

pablo said:
They are bold but if you don't give them lots of cover they'll be unhappy.
Click to expand...

Do you know if the girls fight as well? They seem to be very difficult to determine in gender.. I got 3 from a breeder and asured me i got 2 girls and 1 boy.
But i see them fight and also mate.. Could it be i have 2 boys and 1 girl? I read it's possible to shine a light through their body to see what gender they are, but than i need to catch them.. I's like to avoid that.
Cheers,
Marcel..
Tanks for watching.

The girls are pretty peaceful but can be feisty occasionally.

The males are regularly displaying to each other and chasing other males. Each male claims a spot amongst dense plant cover. They usually partner closely with one female and share cover with them. Now and then they come out to explore for food and display to other males.

Thanks Pablo, i guess in time i need to do the Xray check to find out.. At least i got one pair that's obvious i've seen them do what you describe.. If they mate up is it that the other femaly also gets chased away? I also observed them beeing very territorial to everything in the tank, if papa finds a suitable spot, he already starts defending it and behaves agressive towards everything comming close. That also might be the agression towards large shrimps.. In my case it wasn't realy common to see them attack large shrimps, didn't realy notice if it's territorial but i saw it only a few times and it was not realy hunting it. But they certainly are very territorial towards everything that comes close.

Today i moved them to another tank after a few months the puffer had enough of papa Pumilas picking and was not taking it any longer and it started to confilct into dangerous fights. They are unbelievably bold little fish for their size.
Cheers,
Marcel..
Tanks for watching.

My experience is similar to pablo and others here.

I think you can keep them in pretty big groups so long as they all have cover they're happy with. I only got in trouble when I rescaped and they had less cover, leading to males quarreling over space. If a male can't hide away he'll be virtually chased out of the tank.

Females tend to leave the quarreling to males. They will defend their little spot amongst cover from other fish but this isn't common. I've never seen 2 females fighting.

They become pretty tame in time and can withstand regular tank maintenance pretty well, so long as they can hide away during the process. They often rush to the surface for food when I walk by the tank.

They're suitable for nano tanks. I keep 6 in my 40L tank (2M/4F) and they love it in there. Lots of mini java fern fronds to hide away in and I've broken the line of sight between their favourite spots with driftwood. Works very well.

Don't keep them with shrimp. This is their favourite food. Any shrimp up to Amano shrimp size is fair game. I found out the hard way!!

They need live food to look their best. I feed daphnia and baby brine shrimp mixed in with good prepared foods. They looked their absolute best when on a shrimp diet though haha!

Here's a pic of the dom male in my tank: 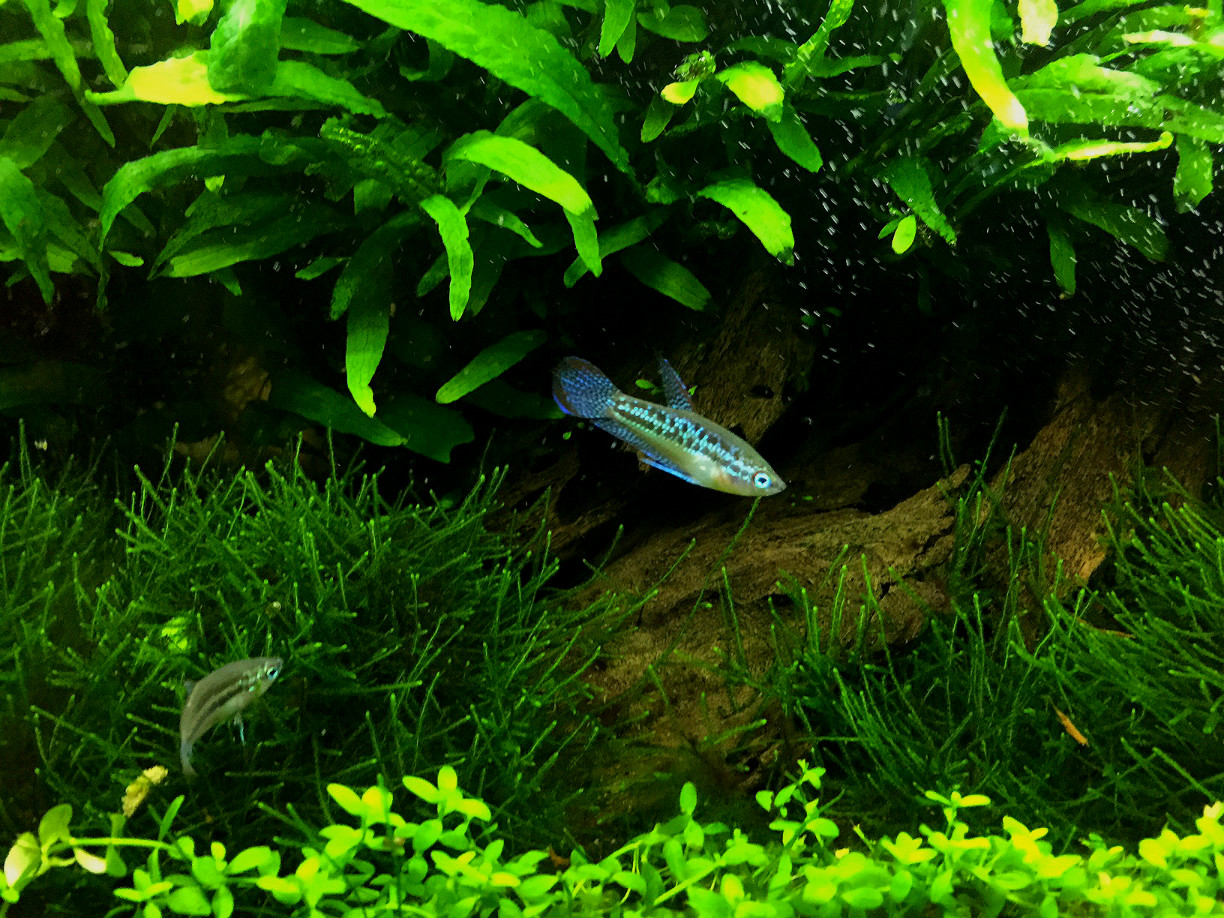 @AquaPlantDemon - nice photo and welcome to UKAPS,
And Greg welcome also...thanks for reviving this thread. I can't believe it's been 4 years since I started it.
It's good to read even more interesting observations about this amazing species...
.
Aquazeitgeist. YouTube
A Brief and Incomplete History of Aquascaping. Soil Substrate Planted Tank - A How to Guide
Schism Reimagined. NatureScape. Return of the Shallow. Windswept Eternity, Primordial. The Dark Side or What Lurks Beneath
You must log in or register to reply here.
Similar threads