Tank
This is going to be based on an old custom made 59 x 30 x 30 cm (o.d.) tank, just about 50 litres, that fits snugly on a shelf in an unheated but enclosed north-facing porch. There's no electricity supply so this is the greenest of eco-projects, receiving only indirect natural light year round - long days in the summer, short ones in the winter. In very cold winters the temperature gets as low as 10°C, in summer heat waves (remember those?) it reaches 25°C. Most of the year temperatures are stable between 15-20°C. Over the years this tank has housed a wide variety of creatures, and now it's destined to hold a single breeding pair of three spined sticklebacks, Gasterosteus aculeatus, although it might start out with a small group of juveniles. It really depends what comes up in the net when I get on my bike and pedal down to the Grand Union Canal. No air miles on my fauna! Like I said, the greenest of eco-projects

Apologies for the poor photo but it's very difficult avoiding reflections in this location. It's not as bright as it looks here, I had to stick a temporary light on it otherwise it's too dim to photograph at all.

Plants - I don't have a light meter but this should give you an idea of how dimly it is lit. Java moss (Taxiphyllum barbieri) and Java fern (Microsorum pteropus) do well, growing slowly. Hornwort (Ceratophyllum) survives and grows very slowly. Anubias barteri survives but doesn't really grow, I suspect it doesn't like the winter temperatures. Egeria densa slowly fades away. That's all I've ever tried in this tank. There isn't really room to grow any emerged plants because of the shelf above. Ideally, I'd like a British biotope, but I can't think of any suitably sized plants that would do well with the light levels. Suggestions please!
Another idea is to go for a moss-only tank - likely to work with this setup or is that just a recipe for an algae hotel? What species of moss would like these temperatures/lighting/static water?

Substrate - Because of the plant list above I've never bothered with a substrate in this tank, but the new setup will have one. I wouldn't go for a Walstad substrate in this tank a) because the water column is already shallow, b) because I think a rich substrate would just case too many algae problems with the low plant growth rates. I'm planning on a simple sand substrate unless someone convinces me there are rooted species which would do well under these conditions. I'll go for a light coloured sand to reflect as much light as possible (I really need every photon I can get in this situation), either pool filter sand, silver sand or play sand. I'll probably chuck a bit of pea gravel about on top to make it look a bit more natural. I might even sit in front of the telly picking out all the white bits - that should get me a couple more photons. Any other substrate suggestions?

Liquid carbon? - With this little light and no water movement, would it make sense to go with very low level dosing with Carbo-Plus or Flourish excel? Would they help with algae control? Talking of which:

Algae control critters - The tank currently has a few red ramshorm snails in it. I don't think Amano shrimp would like these low temperatures? Besides which, sticklebacks are quite predatory and I suspect they'd just pick them apart. I get green spot algae on the glass which is not really a problem, but Cladophora seems to plague this tank, so any suggestions for a clean up crew to help keep the green menace in check?

OK, that's it for the first instalment.... sorry for all the questions
Stickleback Shallows Journal

Hi all,
Sounds an interesting tank, and it should work. Years ago I kept Sticklebacks and they are tricky to feed, I used to keep them going with Greenfly in the winter, but I didn't have Grindal worms etc then. I'd go with a sand substrate. I've got some moss you can have, it is hardy and probably a UK native (I don't know what it is).

I plan on feeding grindalworms, whiteworms, small earthworms and Daphnia, but they normally adapt to frozen foods relatively easily too. The trick is to start by mixing them with live food they like, then gradually wean them.
Stickleback Shallows Journal

Can't wait to see the fish! I used to catch them down the merse in Annan when I was a child. Males are very pretty come breeding season.
Cheers, Lindy

I've been thinking about this project a lot over the last few days. I played around with a complex arrangement of mirrors to reflect more light into the tank and let me grow a wider range of plans before eventually abandoning the idea as too impractical. I have figured out how I can move the tank forward an inch which will give me marginally more light, and i'm going to fit white polystyrene backing to the outside to reflect a bit more, so it's going to have to be emptied and moved. That may not happen for a couple of weeks because life looks complicated for a while.
I've made my substrate choice. Since I'm not going to be planting in the substrate, I picked up a cheap bag of a nice light coloured sand. No point in spending too much money if I'm not planting in it. £4.95 - it's got our name on it. 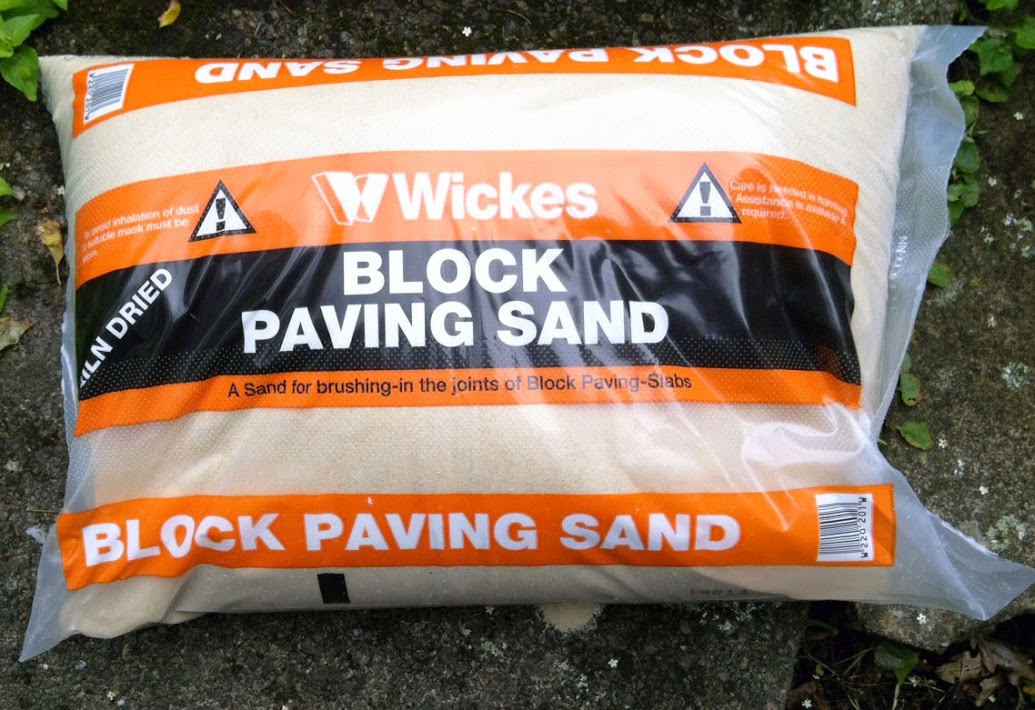 I'm thinking how I'm going to aquascape this tank and starting to collect a few bits and pieces. I'll be making some drawings and asking for opinions soon - aquascaping is my real weakness!
Stickleback Shallows Journal

As I thought, life got very busy and I haven't been able to do anything with this tank for the past few weeks. However, I had a few hours yesterday, so I braved the heat and took the next step. This was to empty the tank completely and move it forward about an inch. That may not seem a big deal, but it's the best I can do in this location and it does let slightly more light fall on the tank (which only receives natural light from outside). 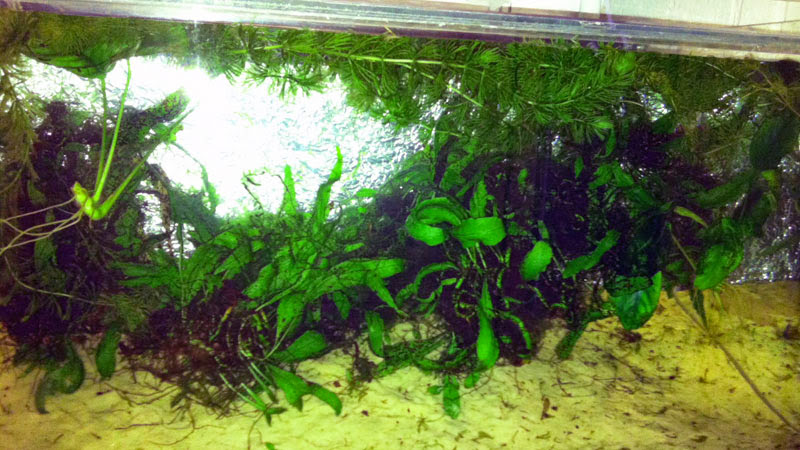 After that, I washed the sand I bought previously, added it to the tank, refilled it and dumped the old plants back in. I've made no attempt to aquascape this yet. I have mixed feelings about the sand. I'm not the biggest fan of sand, and I think the particles are too fine in this batch - prefer something a bit larger such as pool filter sand. I suspect the sticklebacks are going to make a fair old mess digging in this and shifting it about. Also, I have slight reservations about the colour. While it does reflect a fair amount of light back into the tank, I'm almost regretting not going for pure white silica sand, although that may have looked too stark. What does that tell me? That I'm a wimp when it comes to making bold decisions about aquascaping.

I have a few ideas what I might do, but again, they're going to have to wait for next month while life goes on ... My plan is to get this up and running before the end of August when the days get noticeably shorter and the amount of light this tank receives takes a nose dive.
Stickleback Shallows Journal

I've finally had to come to terms with the fact that the location of this tank (see earlier posts) means that it's just not going to be possible to grow much in the way of plants in this tank, so today I took the plunge and collected five juvenile three spined sticklebacks (Gasterosteus aculeatus) from a location about half a mile away from my home:

Although this is an aquascaping horror story, the fact is that it's not too dissimilar to the location the fish were collected from - mud substrate (fine sand in the tank) and sparse vegetation. The fish, averaging about 2 cm in length, seem to have settled down quite quickly, with the largest doing a bit of chasing but they spend much of the time schooling: 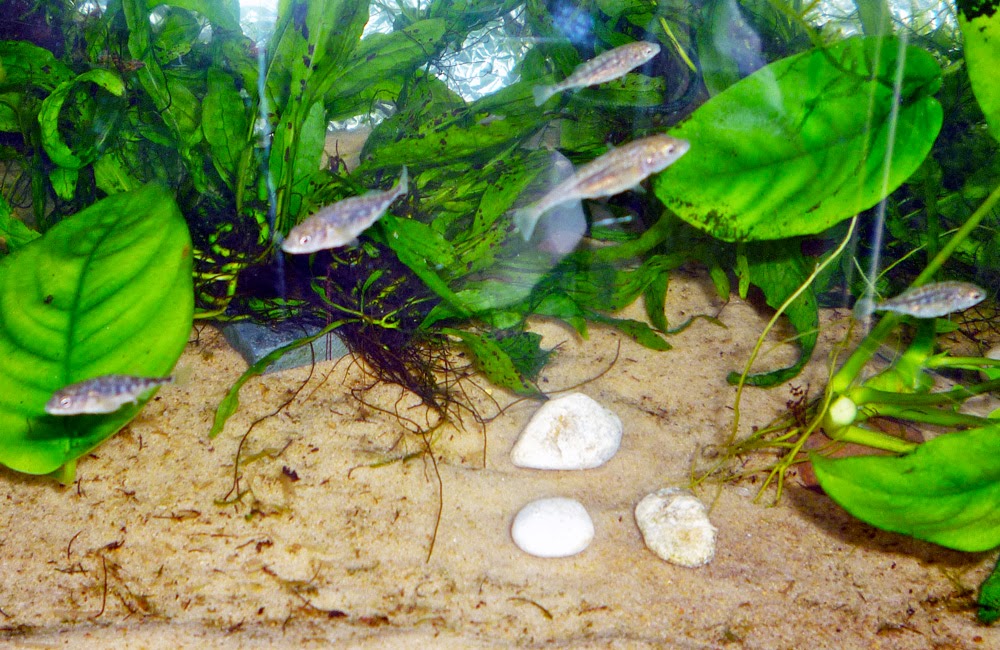 They've already been browsing on Daphnia and they'll be getting grindalworms too before I see if I can wean them onto frozen bloodworm and occasional flake supplementation.
At least the tank is finally up and running. It will be interesting to see how the plants respond to the presence of fish in this ultra low tech project.
Stickleback Shallows Journal
M

Looking forward to see future updates of this tank. I've always wanted to try set up a native tank, this will be a great reference if I do end up doing so in the future!
Not the best looking aquariums as I'm still a novice in keeping aquatic plants but I hope yous can follow my progress,
cheers,
Michael.
Low Tech 30L Betta aquarium
Low Tech 30L Shrimp aquarium
Orchids
You must log in or register to reply here.
Share:
Facebook Twitter Reddit Pinterest Tumblr WhatsApp Email Share Link