Hi All. Long time no scape!

As the wedding season has now tailed off I decided to re-do my nano with some seiryu Ive had for a few years but never used.

Here's the tank stripped down, cleaned then had the powders and power sand added. removed from the edges so it doesnt show then covered with amazonia 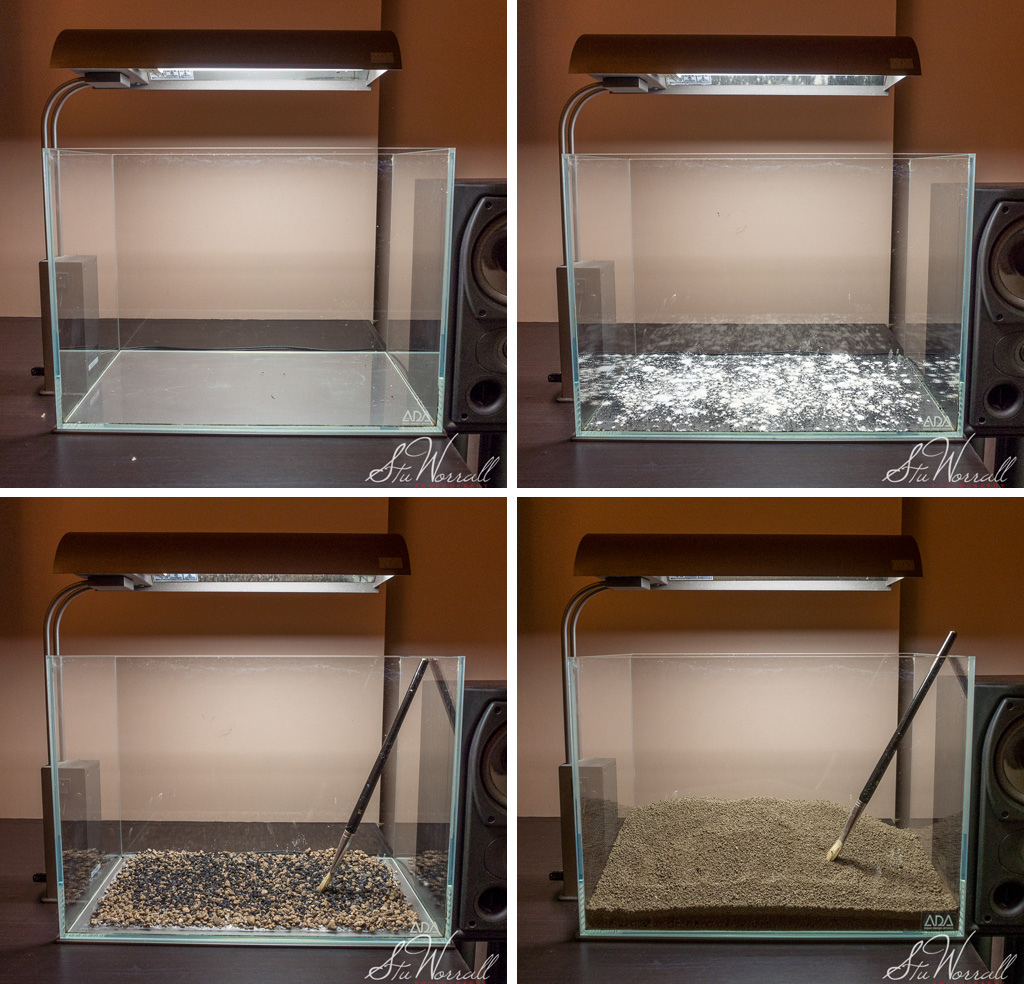 Initial hardscape then added another and wetted as I wasn't happy with the back left. There are 5 stones in there and the big stone is actually made up of 2 which slotted together nice

Planting of the grass and HC started. Really love the mini grass out of the 1-2 grow as its so much easier to cut sections than with rock wool. I didn't do too well with the HC though. I bought tow pots and they stayed in the same place waiting to go in but one changed colout to an off green and the other was ok. When they went into the tank you could see the difference and the upshot is that the off green has melted and the other is doing fine 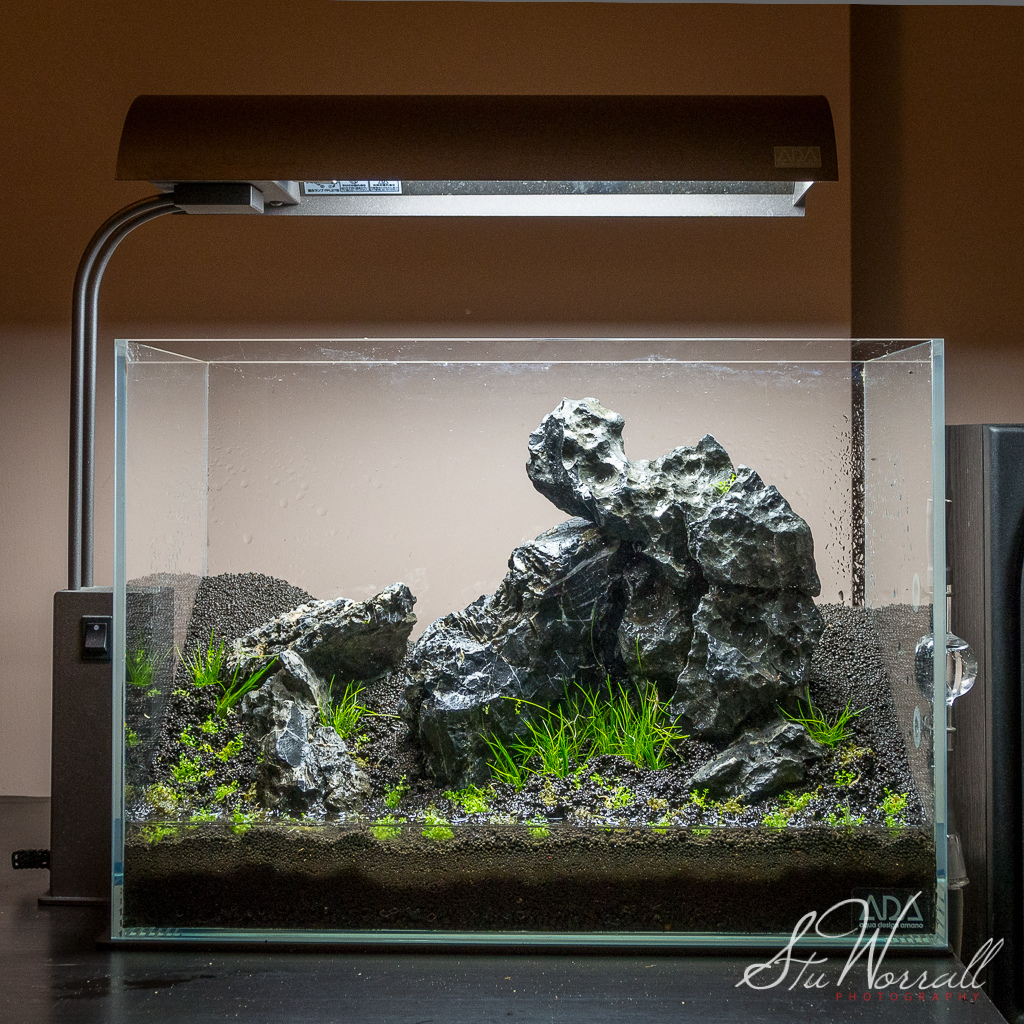 Planted up and running. I decided to grade my amazonia so the bottom layer is sieved big particles then the top is what was left over plus powder. 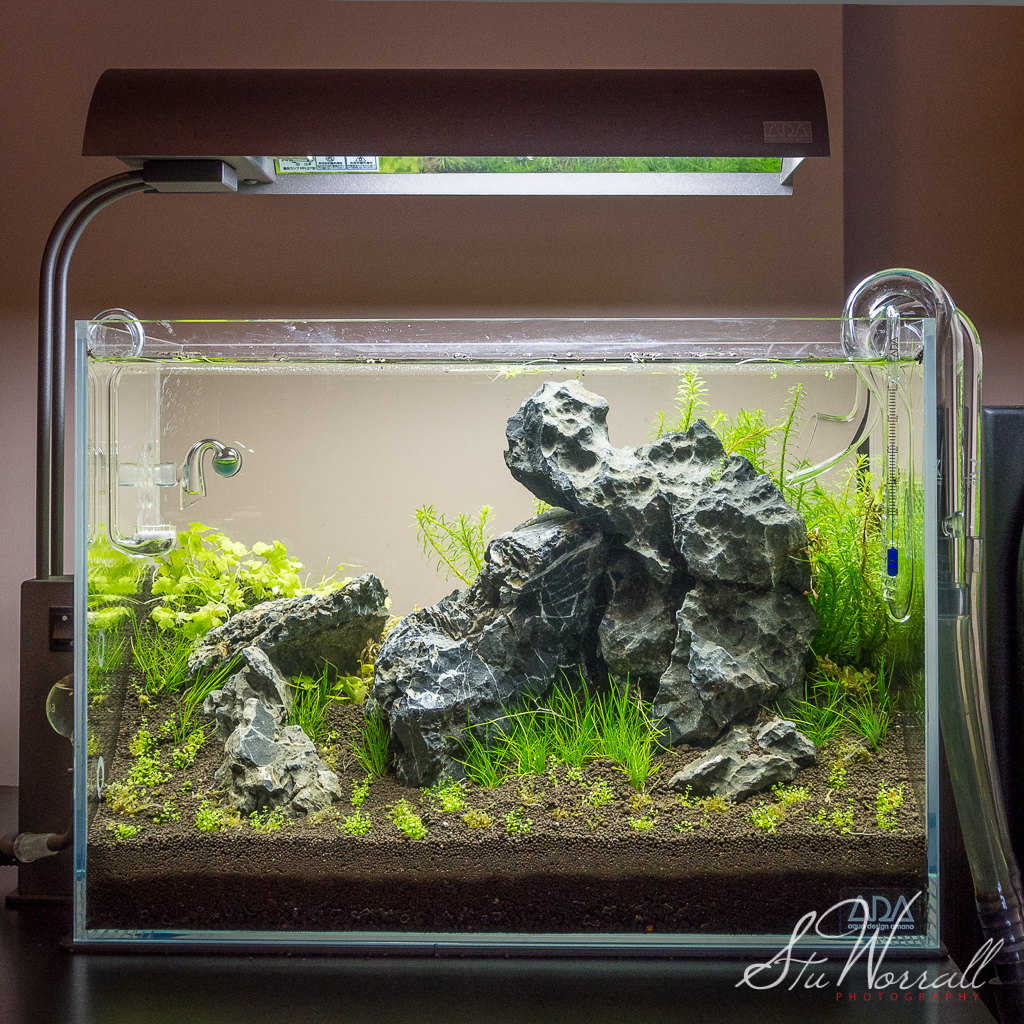 nice layout Stu, the main rock(s) is a monster! Tis another winner.
life is like a pot of HC

cheers Ian. Will see how it pans out. I had wanted to use a bigger main rock and nothing else but im keeping the big ones for my 90cm re-scape
90x45x45cm tank scapes - Llyn Peninsula / "Unknown Valley" / "Apalala Shore"
ADA Mini M Nano (36x22x26cm) - "Aquascape #2"
Stu Worrall Photography

A great display, it's going to look fab when it fills in.... Good luck at aquatics live too mate

Cracking hardscape! I'm sure this will be a top scape, Stu!

Is the seiryu stone, affecting the kH a lot? Have you got any observations?

Thanks all, sorry for the late reply but dont seem to be getting emails through from ukaps


Gary Nelson said:
A great display, it's going to look fab when it fills in.... Good luck at aquatics live too mate

Thanks Gary. hope to see you there too this year if you're going.

Antoni said:
Cracking hardscape! I'm sure this will be a top scape, Stu!

Is the seiryu stone, affecting the kH a lot? Have you got any observations?

Not sure on the KH as I dont measure my water but you can bet it will be increasing it a bit. Its getting 2 day water changes at the moment so will be back to tap water levels every time its changed.
90x45x45cm tank scapes - Llyn Peninsula / "Unknown Valley" / "Apalala Shore"
ADA Mini M Nano (36x22x26cm) - "Aquascape #2"
Stu Worrall Photography

The tank had its first trim last night. The stems at the back had reached the surface so theyve been chopped and re-planted. also some of the HC was starting to rise and some was creeping so the rising stuf has been chopped. The tnak has been getting 2 day water changes at the moment and fingers crossed no signs of algae yet. will take a pic tonight for an update
90x45x45cm tank scapes - Llyn Peninsula / "Unknown Valley" / "Apalala Shore"
ADA Mini M Nano (36x22x26cm) - "Aquascape #2"
Stu Worrall Photography

This is a very bold scape. It looks 'odd' to have the rock sticking out like that, but this makes the layout unique. I think people should worry less about what looks natural and rather focus on what looks interesting.

yup, the head part of the stone did look a bit odd so Ive softened it out with some fissidens

Day 12. seems to be going ok at the moment and Ill be adding some lodgers soon. 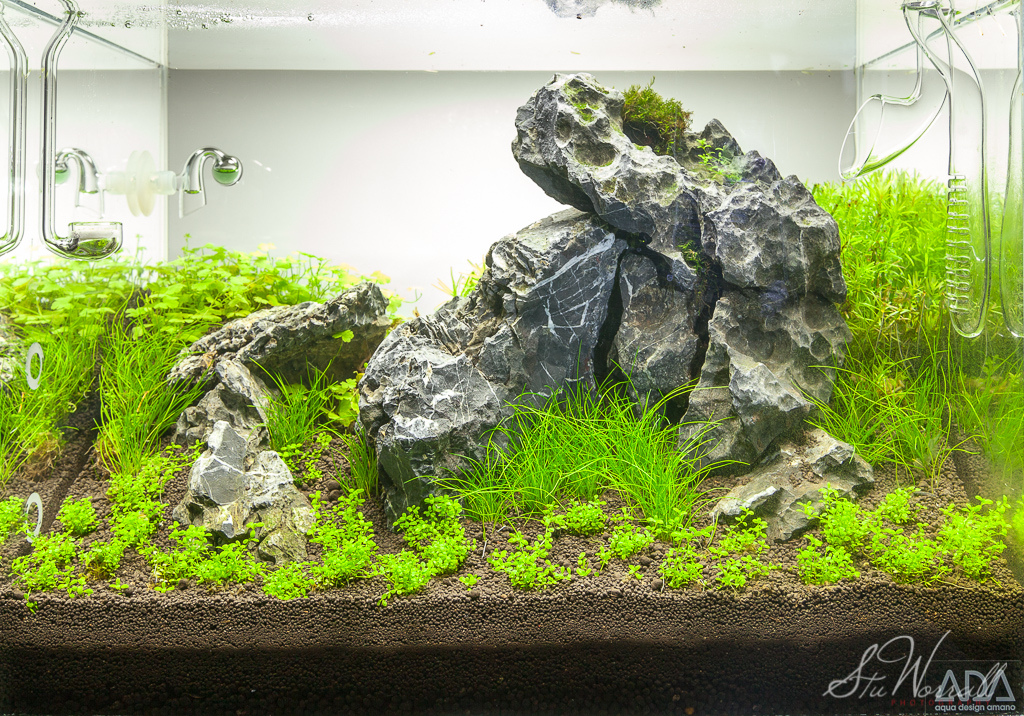 beautiful layout looks great, will be good to see some fish soon to even the scope out.
Rebirth of two 30cm cube tanks

if only they were inert

a couple of weeks growth. algae seems to be kept at bay apart from some i removed from the glass. Its had one trim and is now due another to keep the HC low.

Ive also added from endler guppies from TGM at the request of my daughter as Ive been promising her some fish for ages! also popped a few cherry shrimps in too. 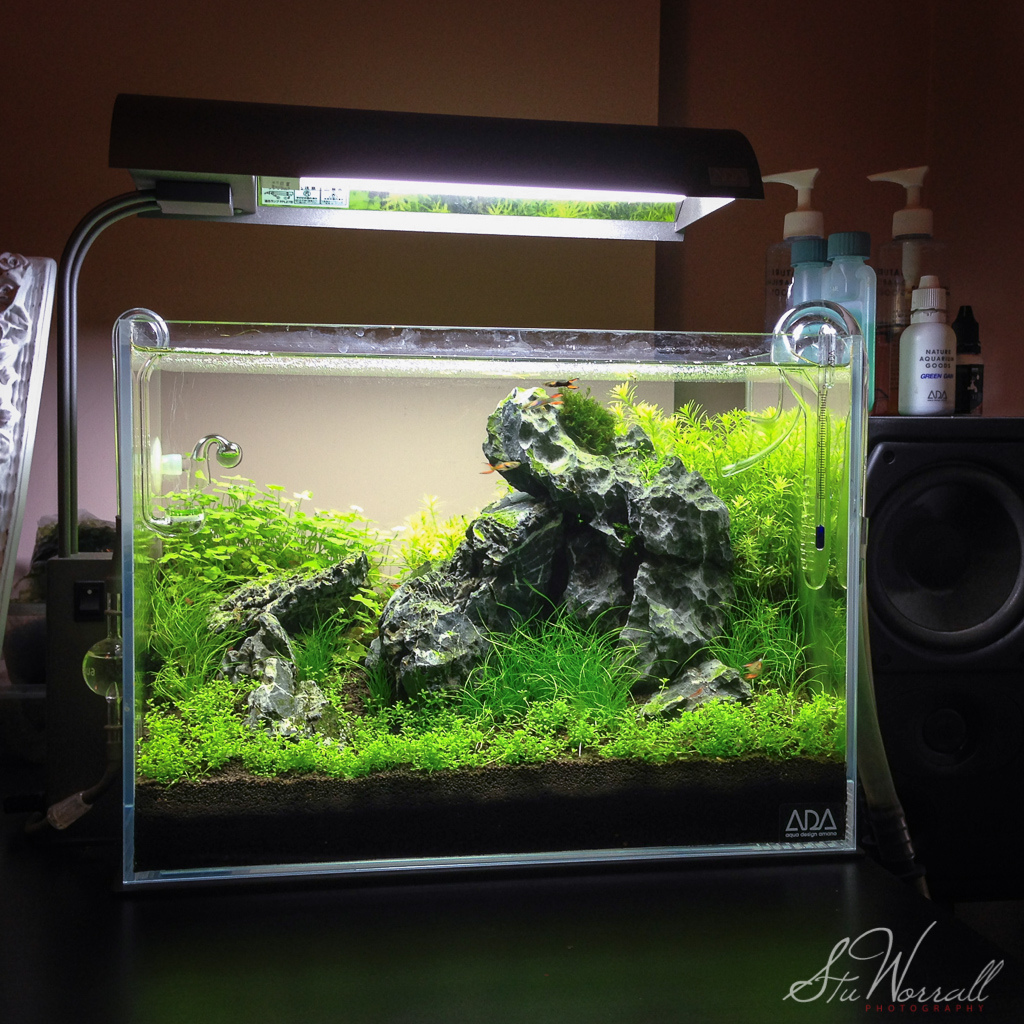 it had a big trim. Had some algae creeping in after I didnt get around to doing a water change for a week and a half but its back on track now. Started trying to use the seachem ferts on it but its super hard to work out on a 20L when 7ml will do 270l !!

some updates on the growth at 6 weeks. oh and I got a macro lens 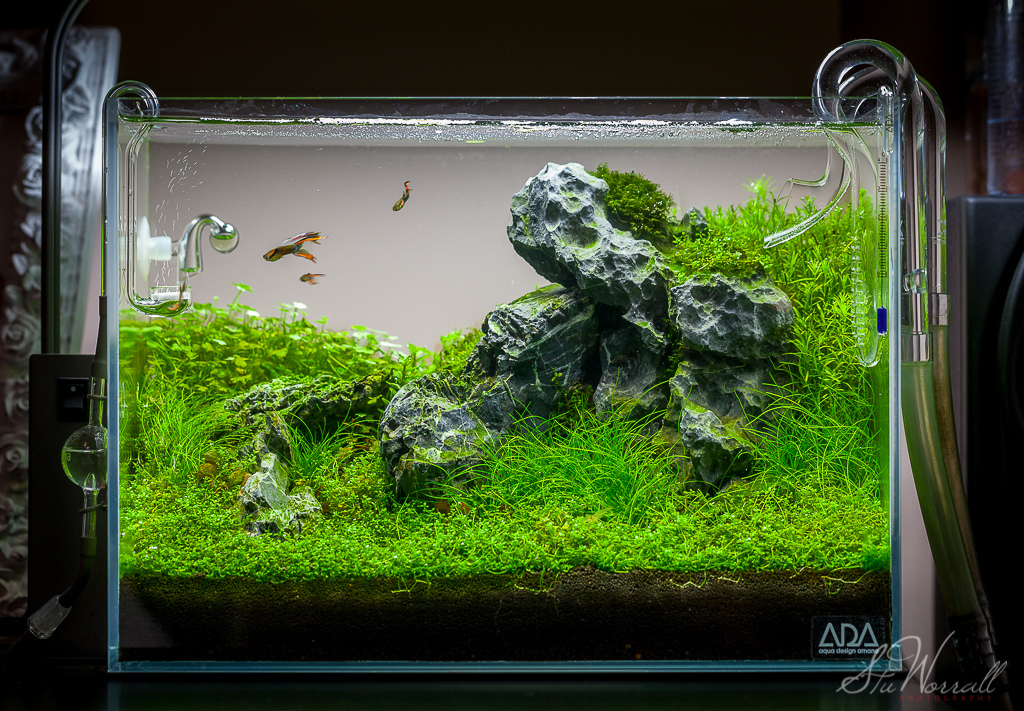 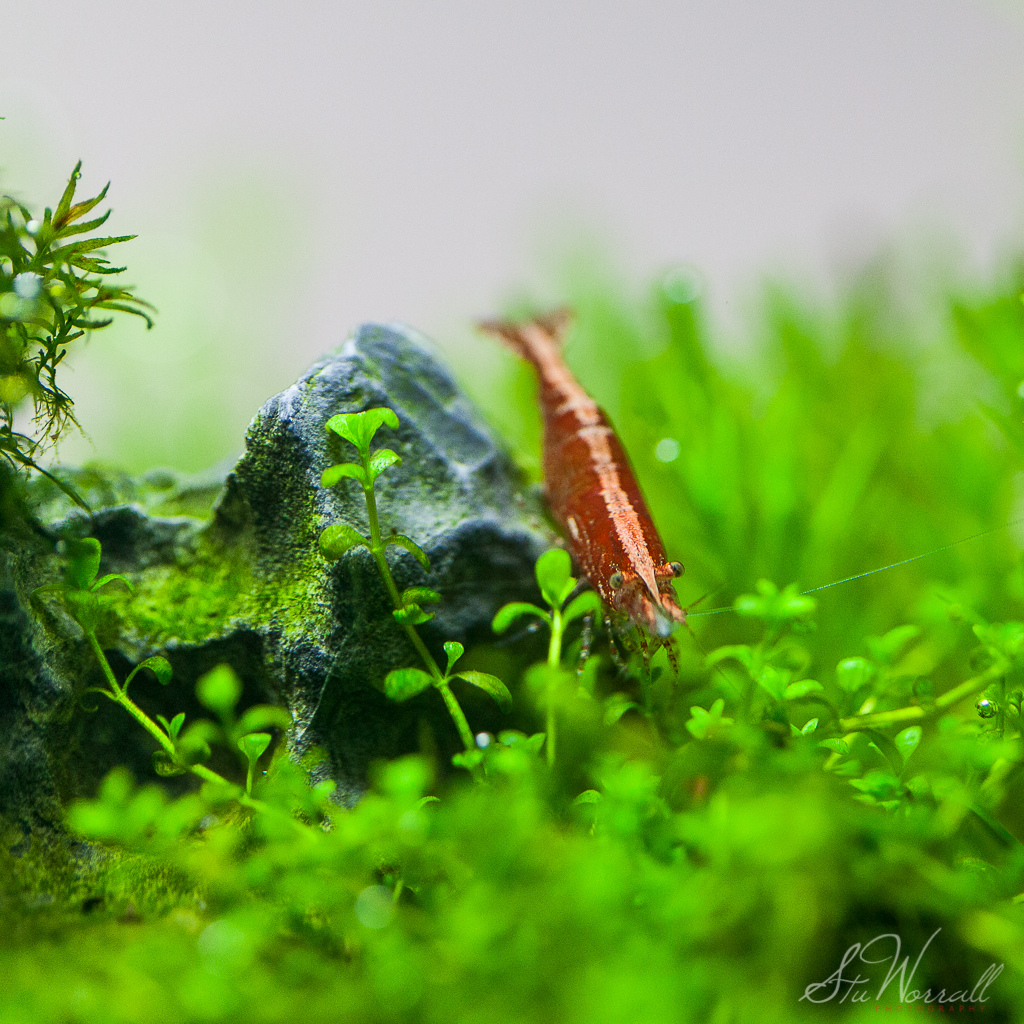 some stone and Mini SP Hairgrass 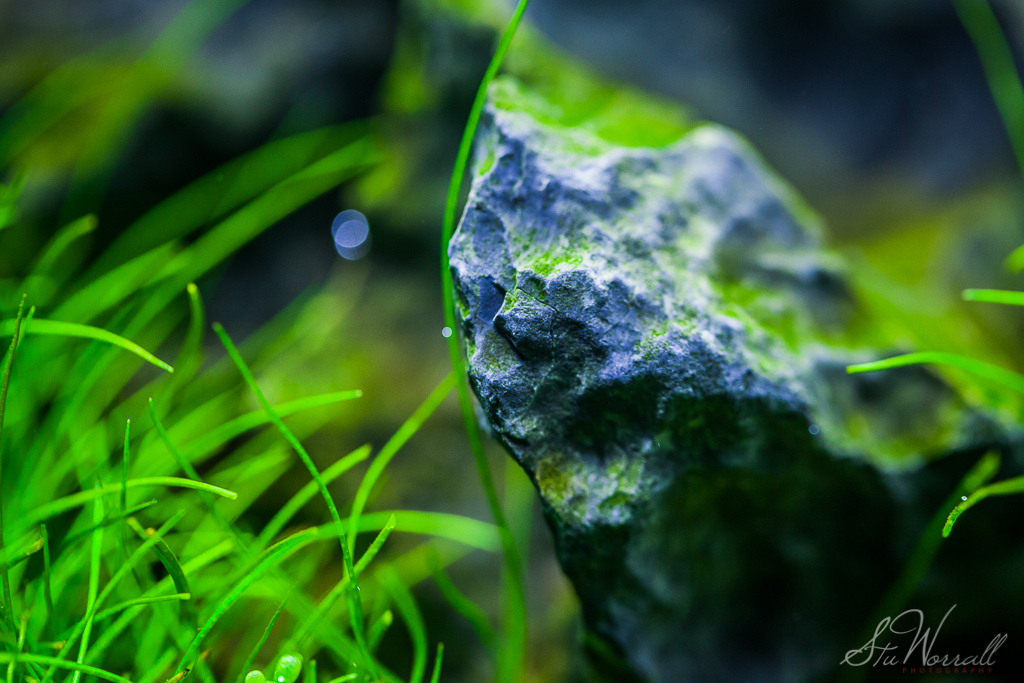 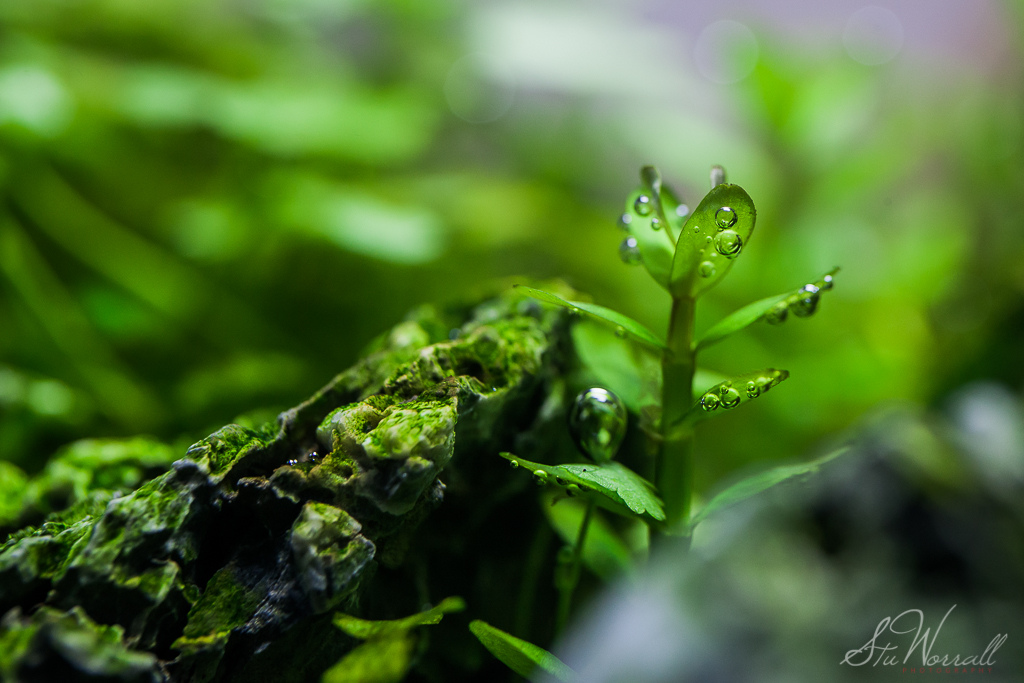 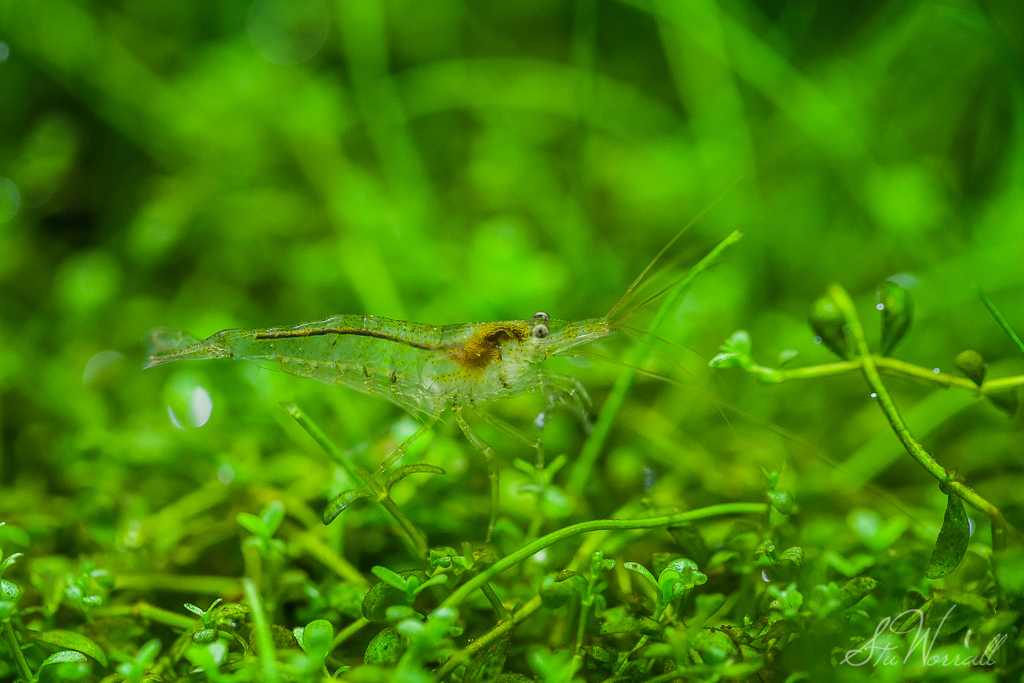 An example of the substrate, course at the bottom for water flow and fine at the to for planting 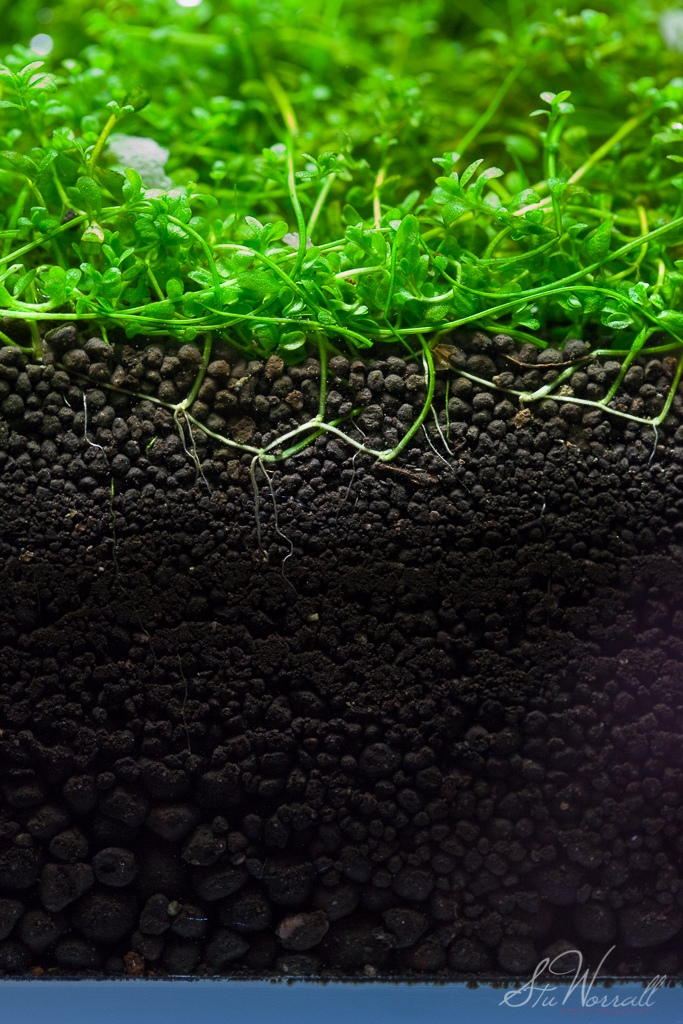 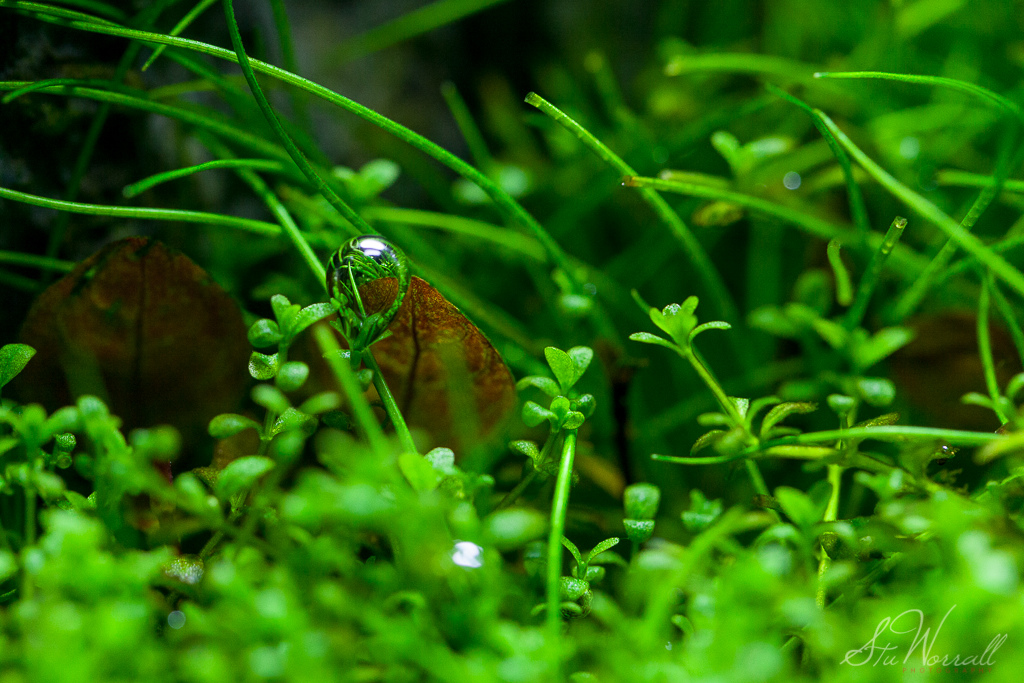 Cheers Stu, how you find the Solar Mini? In the past when i used i found it to be very powerful above this small tank. So i had kind of a continous battle to keep up the balance. Of course the small tank size not helped at all Seems like you also have similar issues, but i would be appreciate to hear your thoughts on it.
Hungarian Aquascapers: http://www.akvakertesz.hu
Personal Blog: http://www.viktorlantos.com - Flickr Photos: http://www.flickr.com/photos/viktorlantos/

Cheers both. Yes I do find the Solar Mini a bit too bright Viktor, especially when youve got a low plant mass in there. Ive been keeping on top of this one by regular water changes but I have thought of designing a difuser that will cut down the light and let the heat out as it will make my life a bit easier!
90x45x45cm tank scapes - Llyn Peninsula / "Unknown Valley" / "Apalala Shore"
ADA Mini M Nano (36x22x26cm) - "Aquascape #2"
Stu Worrall Photography