Cheers guys, i am not posted journals a while ago, as things keeps me very busy, but since we're moving out of the crazy season it's time for sharing and caring again

I though i share my last tank which i built at home. Running a business is not easy and most of the guys who is involved slowly turning down their tank at home as too many others to take care of.
This is what happened with me too. I had this tank on hold for over a year when i restarted it 6 month ago.
Build something at home is much easier sometimes than do this in a shop.

Earlier problems were mainly 2 things.
1. my flat is too light and even if i have the tank 7 meters from the window the lot of extra light caused problems earlier
2. the other problem is the heat. the house almost block the heat exchange and at summer this is critical with a planted tank. i do have air conditioner, but do have a little girl too which is more important than a tank so i could not run it as needed sometimes to keep the temp low.

Additional shaders helped, and this time i put an ugly ventilation unit over on the tank. This has 4 vent it in and the way i mounted it is almost not visible.
Seems like this thing solved the problems til now as running on the lowest speed keep the tank around 22-24 celsius.

The project name is undecided yet, but the reason why i have this title, because many thing not worked out the way i wanted and some others lead the tank to a success at the end.

Called this fallen as the master plan was to involve some leaf too on the final scape.
Playing with a little PS i found something which is unique and could be a hit..... short story i failed

based on the above concept the hardscape was almost done 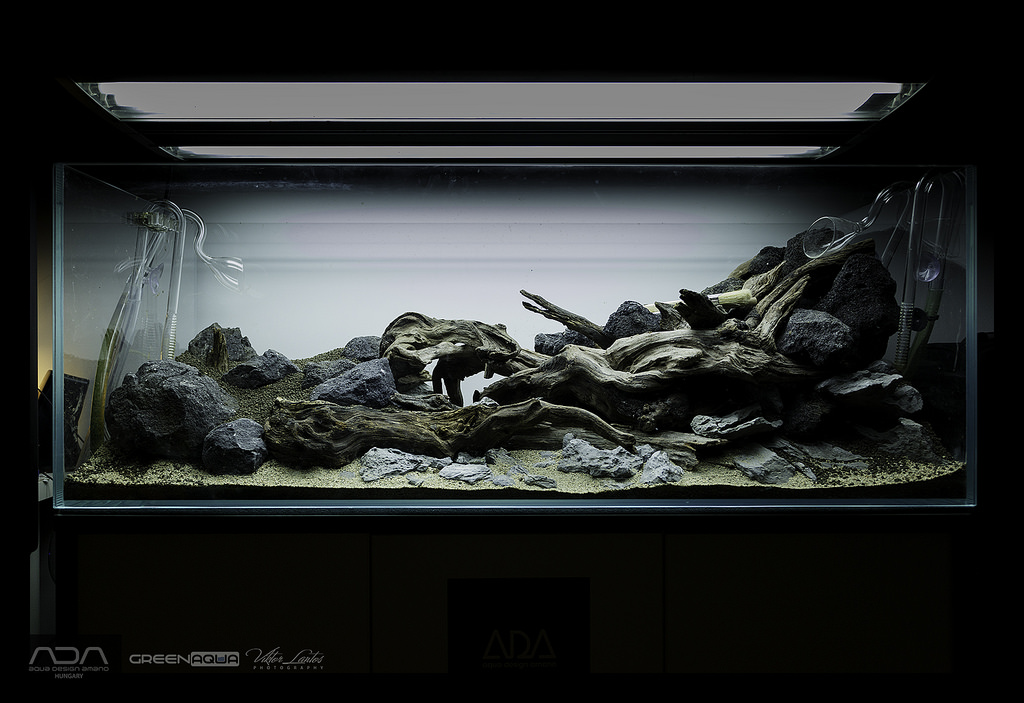 i had the plan to use dry start in the first few weeks to have that moss effect on the stones. 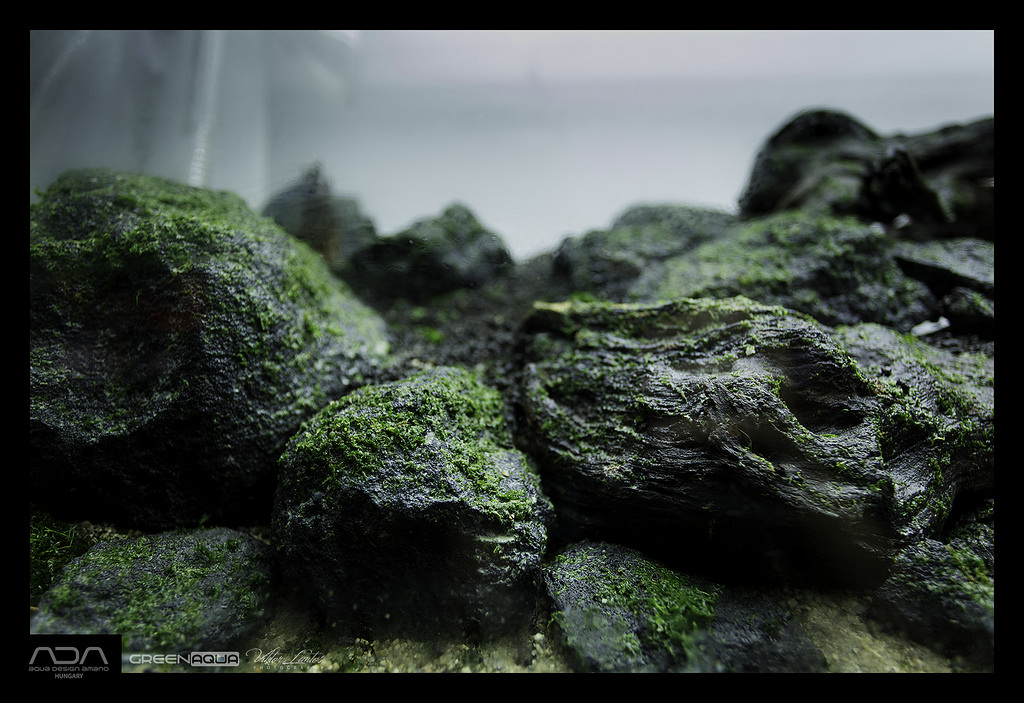 Moss planting with dry start by viktorlantos, on Flickr

Riccardia nicely grown, but more on the wood less on the stones .... grrr

I had to add in a fogger as the plants dried quicker then i was at home to spray it.
This actually helped to keep everything wet and be on autopilot mode for weeks. 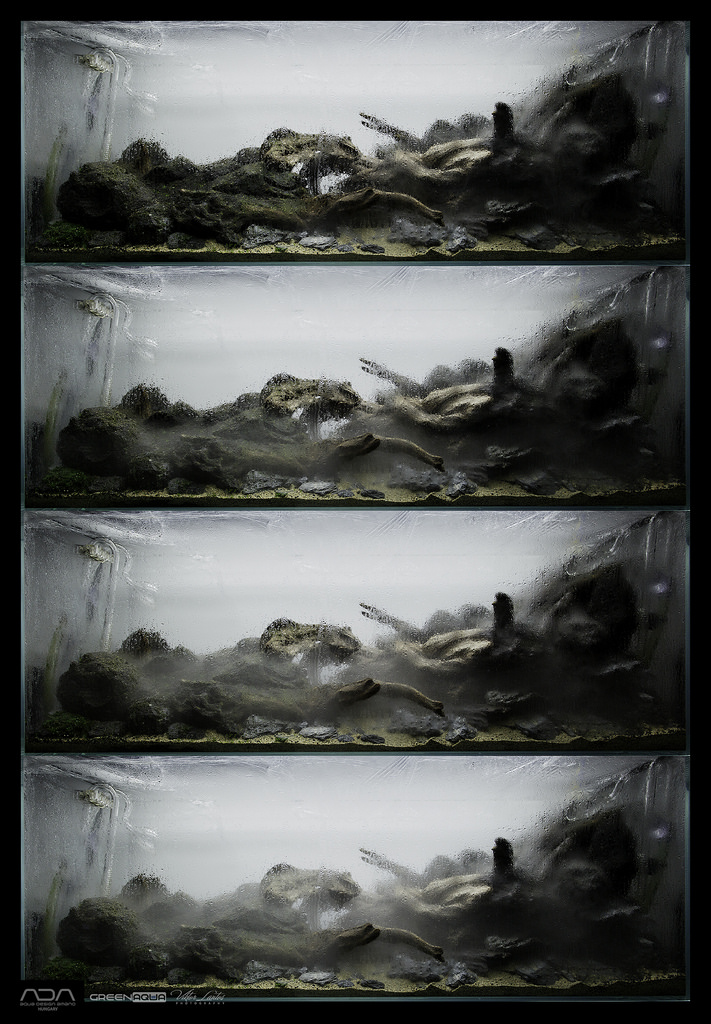 Moss growing - with auto humidifier by viktorlantos, on Flickr

Then after 3 weeks i added in the rest of the plants and filled up the tank with water. 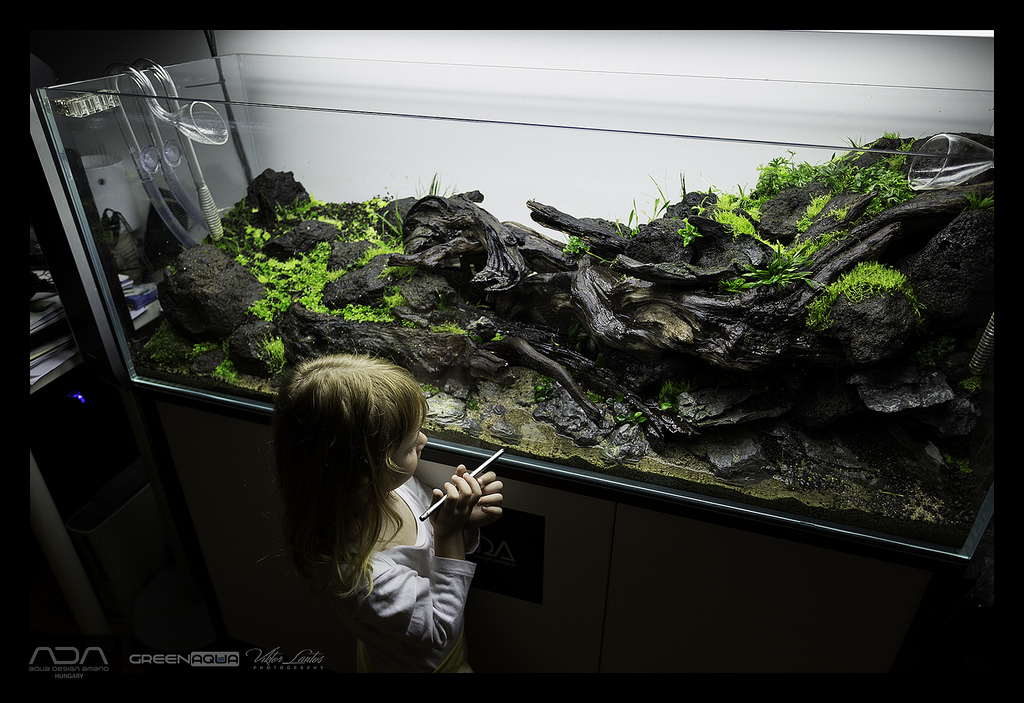 Planting with my creative director Lili by viktorlantos, on Flickr

next episode is coming

Not too bad, had better start too earlier

All the riccardia is brown for the start. Maybe algae, maybe too much humidity. On wood this looked well, and all the fissidens were good too.

Added in some crazy new moss from Anubias called Amblystegium Serpens.
Seemed like a good idea.... failure This moss looked great in dry mode, but under water it is a weed and an algae magnet. Melting like utricularia g.
On the photos these are the tall mosses. 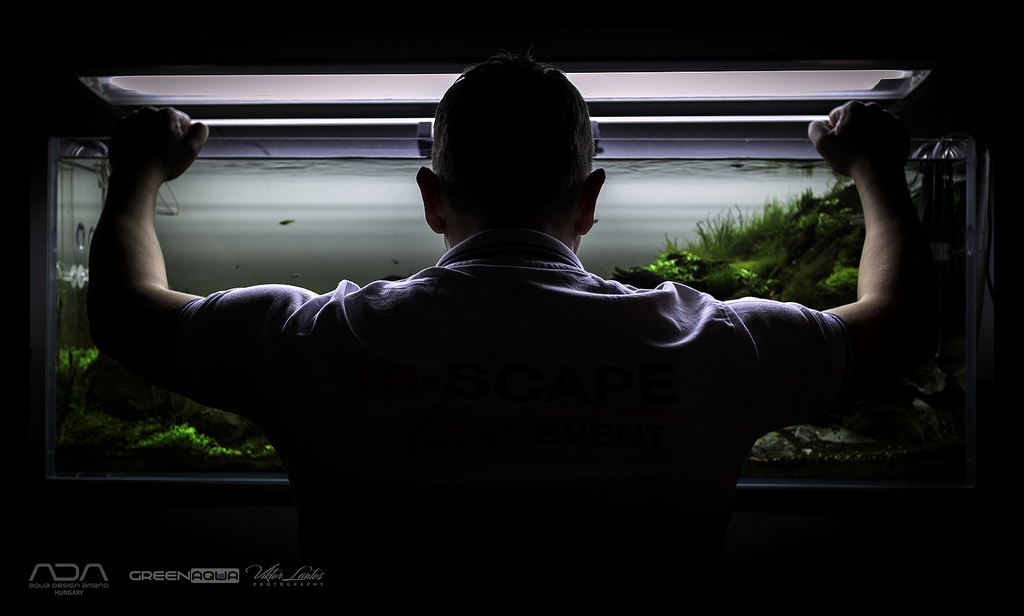 4.5 weeks.
The hungry Otocinclus team which i added in eat up all the riccardia from the lava stones. damn! plan needs to change. i do failed the original concept already in the first month

2 months old and the right sides start to look beautiful there. left side is still a problem. Serpens moss is still causing me headache.

life saver! still running it and do the work. 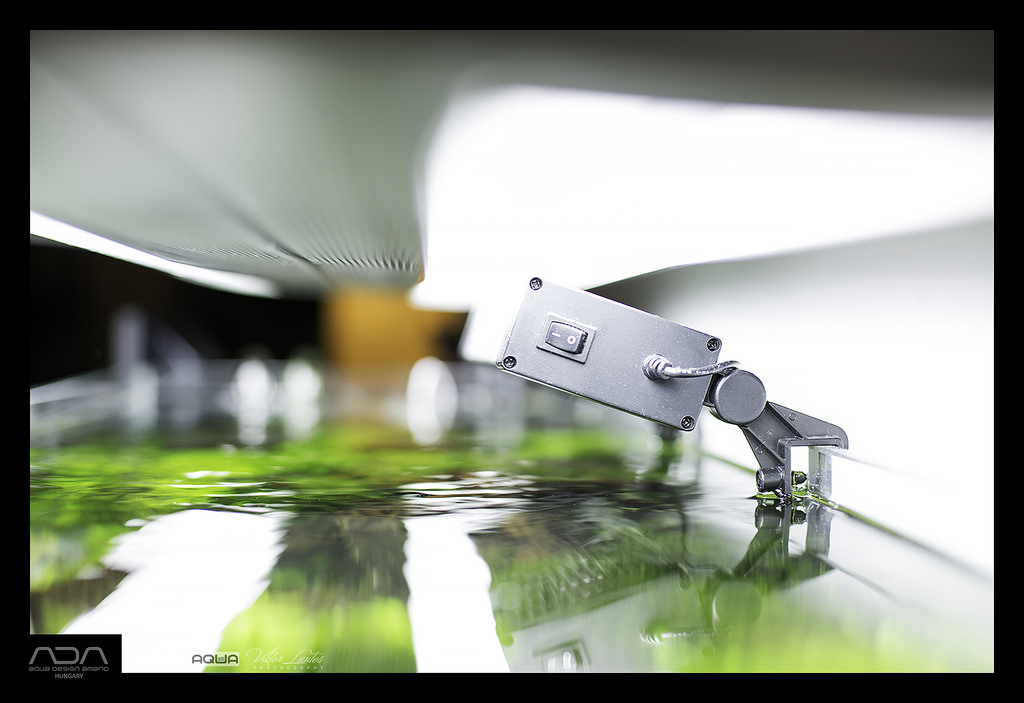 3 months old. should be complete by now, but i do have mainly slow growers so it takes a little more.

3 months milestone is almost here by viktorlantos, on Flickr

3 months milestone is almost here by viktorlantos, on Flickr

This was the point when i've checked first how this looks. How natural it is since this is the main change at IAPLC this year.

Looked good Just a little PS to test it. Many asked if this is real or not

unfortunately the tank is only 39 cm deep which is really hard to work with if you're building a space. 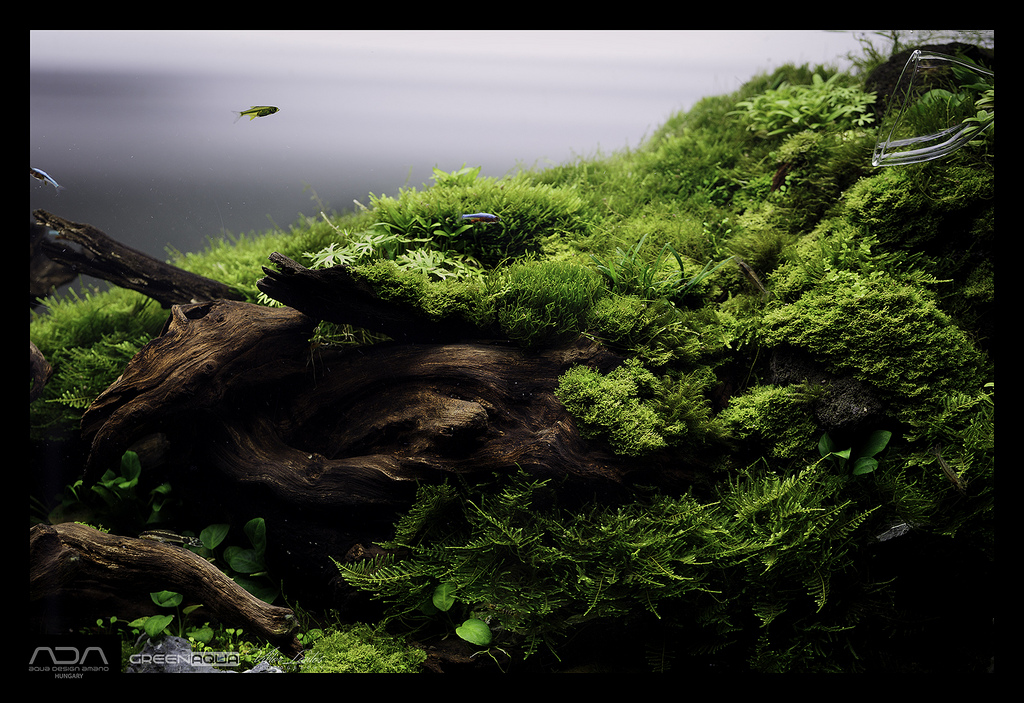 5.5 month old running out of time with the photo shooting. plants need heavy trimming to get back on track.
Also i lost the right front sandy part which i realized will not have it back

Prepare for the final shot by viktorlantos, on Flickr

Been in the forest on the weekend and i've seen how the horizon and sky colors look like in the distance.
So a little more PS to see if this would extend the space without loosing the focus on the real tank 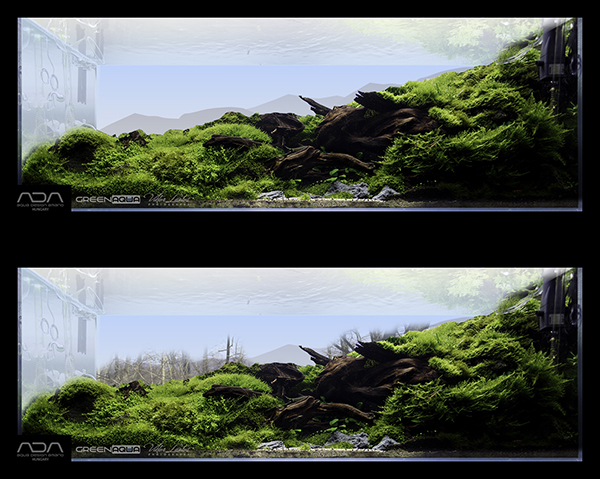 Was not bad at all.

More frequent photos to see what needs to be fixed.

6 months old here. Some stones also added to the right back to extend the space a little. 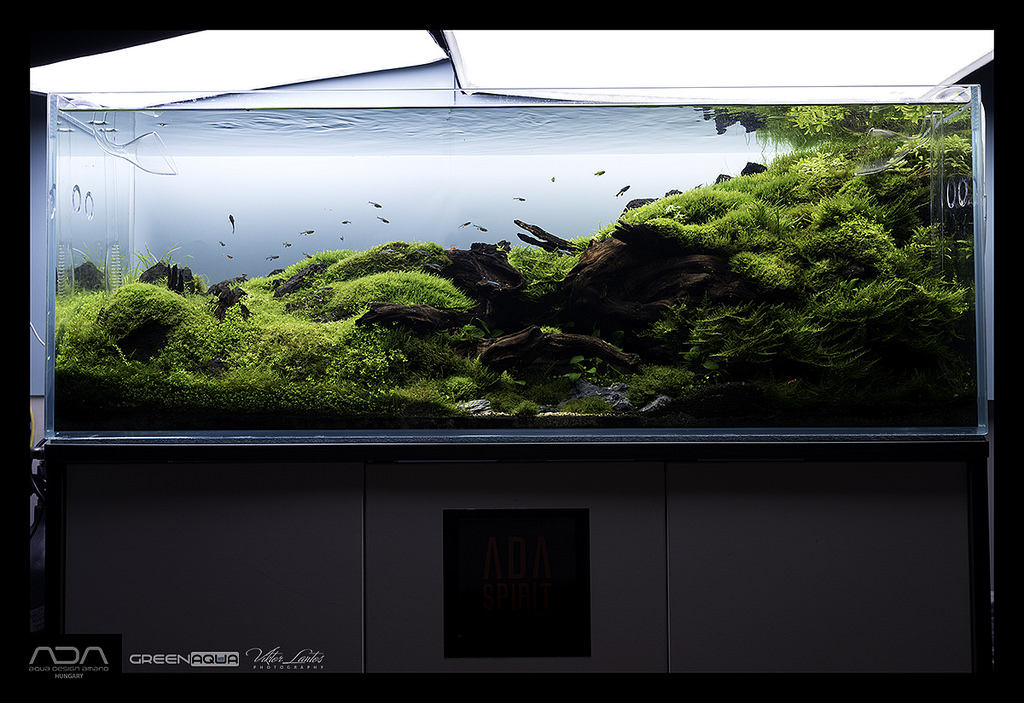 I made the outline of the mountains and the blue grade and sent it to the printers.

Shortly after received it made some test shot, but my daughter sabotaged the photo session With her in the shot maybe the sizes looks totally different. This isn't a small tank 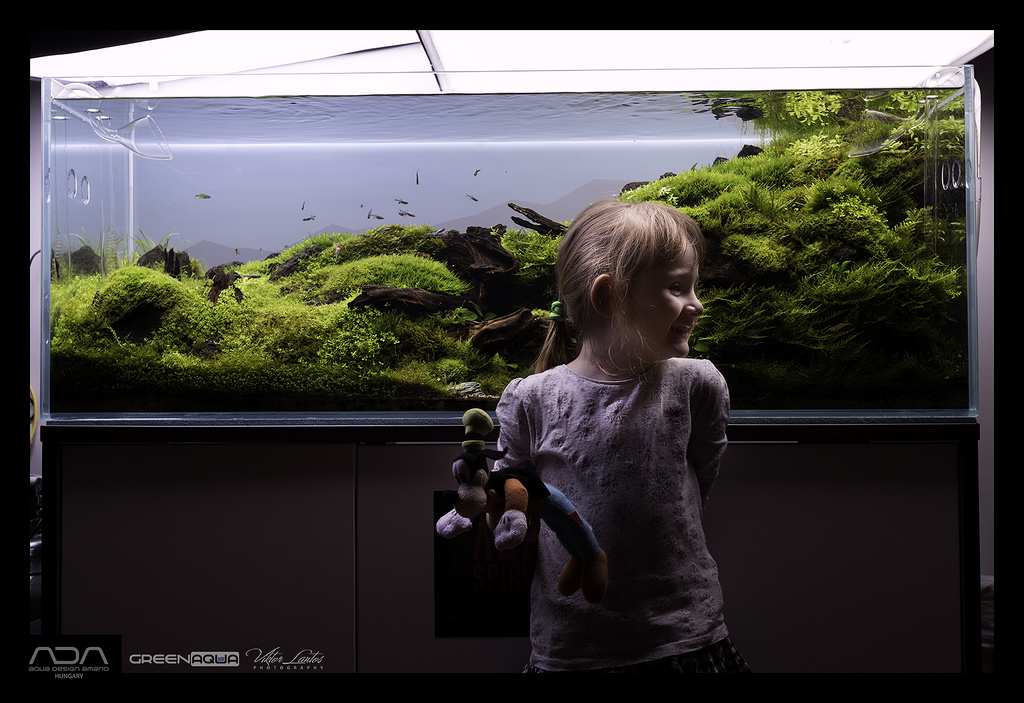 Backlight added to illuminate the printed background. This is a spec paper used for bus stops AD tables. 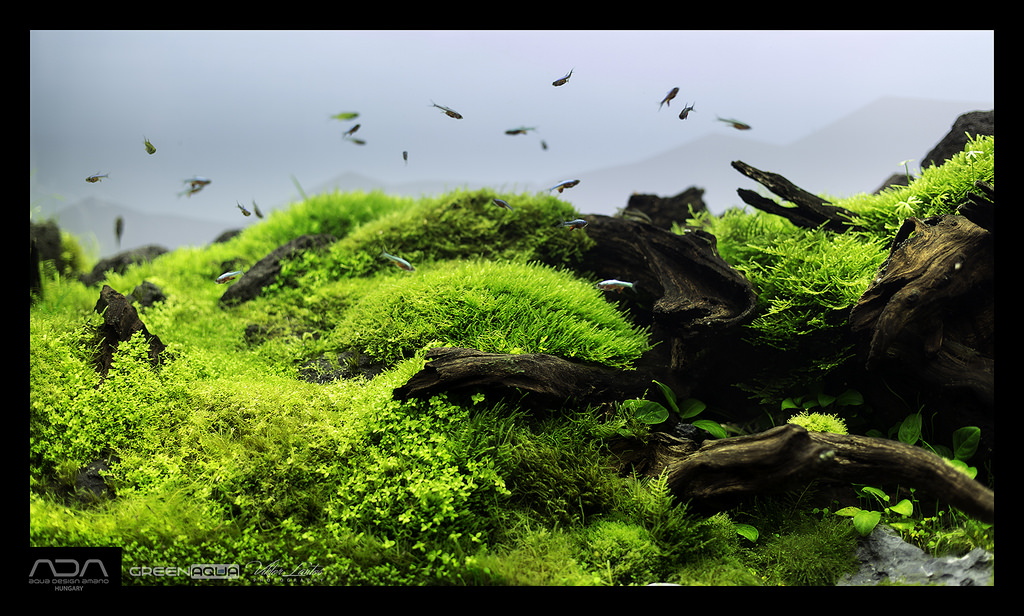 with the tank light and back light 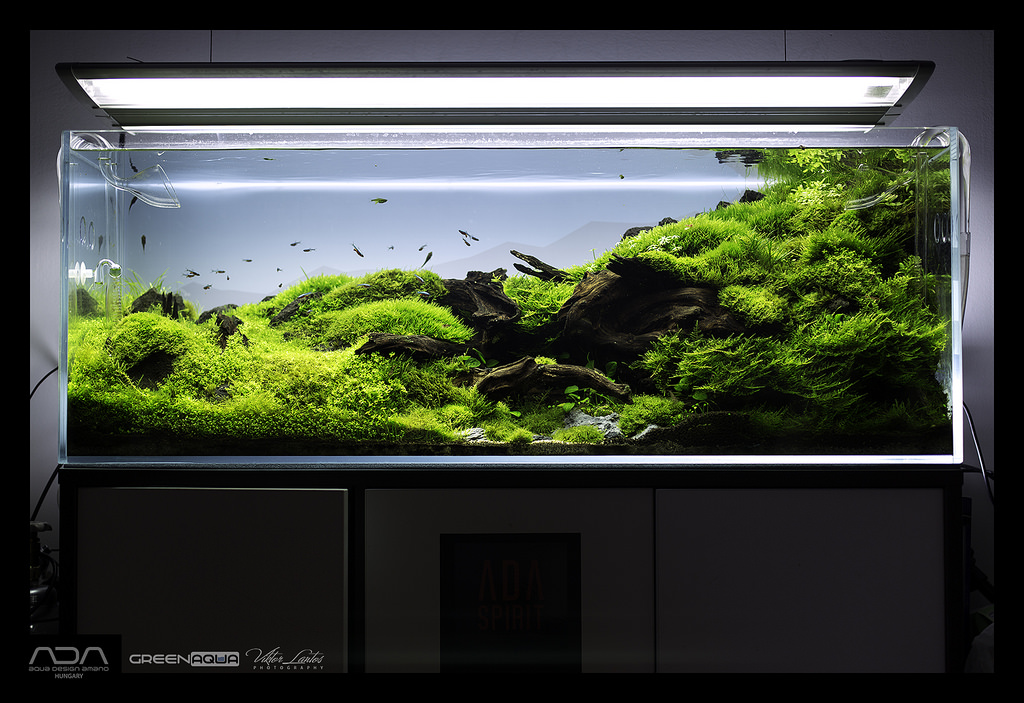 At this point a bit more cosmetic work and i mounted the bowens to shoot the contest images which i am not sharing yet.

So there was many challenges, plans had to change. At the end i did not used fallen leaf as it was in the original plan as the scape came out a mountain piece more and the leaf would be too large for this image.

But it looked fab on the earlier shot, where the leaf was real in the aquarium. My friend collected my these pieces in a spec size

As a result the tank is less original less groundbreaking, not so fine. This is the reason why i am not afraid to share it I am not in the top 27 for sure
Still did my best to lead this tank to the final shot. The concept not worked out the way i wanted, but i do love this scape. Gives me only a little work even with this much light.
Plants looks fab and gives the same visual appearance in it's lifetime.

Oh and more more thing. My Profilux logged the temp and pH in the past 6 months.
Temp was fine as you can see. pH however slowly increased, so this week i turned back on the pH computer again to keep the pH in a safe level for CRS/Taiwan shrimps.
The tank has more pH changes because the 2500lph and the extra ventilation. In the early stage the filter material (Bio Rio) and the Amazonia was stronger, but after 6 months seems like the vent is winning so had to change the way of the CO2 management. 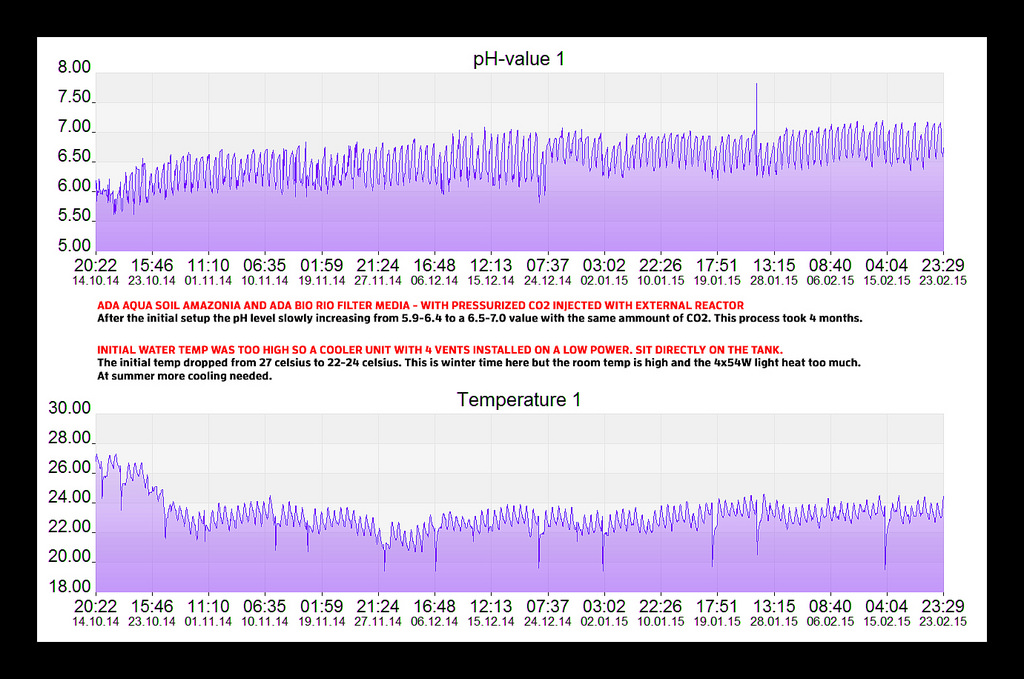 Impressive mate! I love the scape, specially the first period when rocks werent very covered and hardscape was more exposed.
So what pH drop do you normally go for? Sorry cant see accurately in the figures.

Jose said:
Impressive mate! I love the scape, specially the first period when rocks werent very covered and hardscape was more exposed.
So what pH drop do you normally go for? Sorry cant see accurately in the figures.
Click to expand...

Originally was below 6 at the start. Even at nighttime the pH did not go over 6.5
I kept some taiwan bee shrimps and many CRS.
But after months the pH slowly increased and at nighttime it become too high for taiwans.
Nowadays after 6 months the pH is 6.8 daytime with CO2 and 7.5-7.7 nightime.

So i turned on the pH computer to keep it 6.7 all the time with 0.2 change a max. Even at nighttime.

What a fantastic read

superb Viktor. Loveley to see hows its progressed over the months

Thanks for sharing Viktor, awesome scape...I've been thinking about doing something similar in miniature in a Cube Garden 60-f...you've given me some ideas and inspiration.

Going back to nature for inspiration

Hi Viktor, amazing work from you as always. Really love this scape.

what's to say that hasn't been said before...

Inspiring creeps to the front of my mind.

Well... can't really add anything new Viktor, everything has been said -> Absolutely awesome piece of art!

I've observed the whole development in Flickr in the past few months. I was and I am still a big fan of this work of yours, Viktor! Now I understand what happened with the moos from the beginning. I didn't knew that Otos have also this negative quality. I must also say, that I found the original idea better, but the undiminished development looks also great. As Chris already wrote - absolutely awesome piece of art! I see it that way too!

P.S. It will be a pleasure if you decide to share your next project and its development from the beginning.

Thank you for all of your comments and feedback. I am glad you liked the progress. It was a nice learning curve for me too. Probably would do a couple things differently next time.

Riccardia growing on the glass in high humidity. light green is the new growth 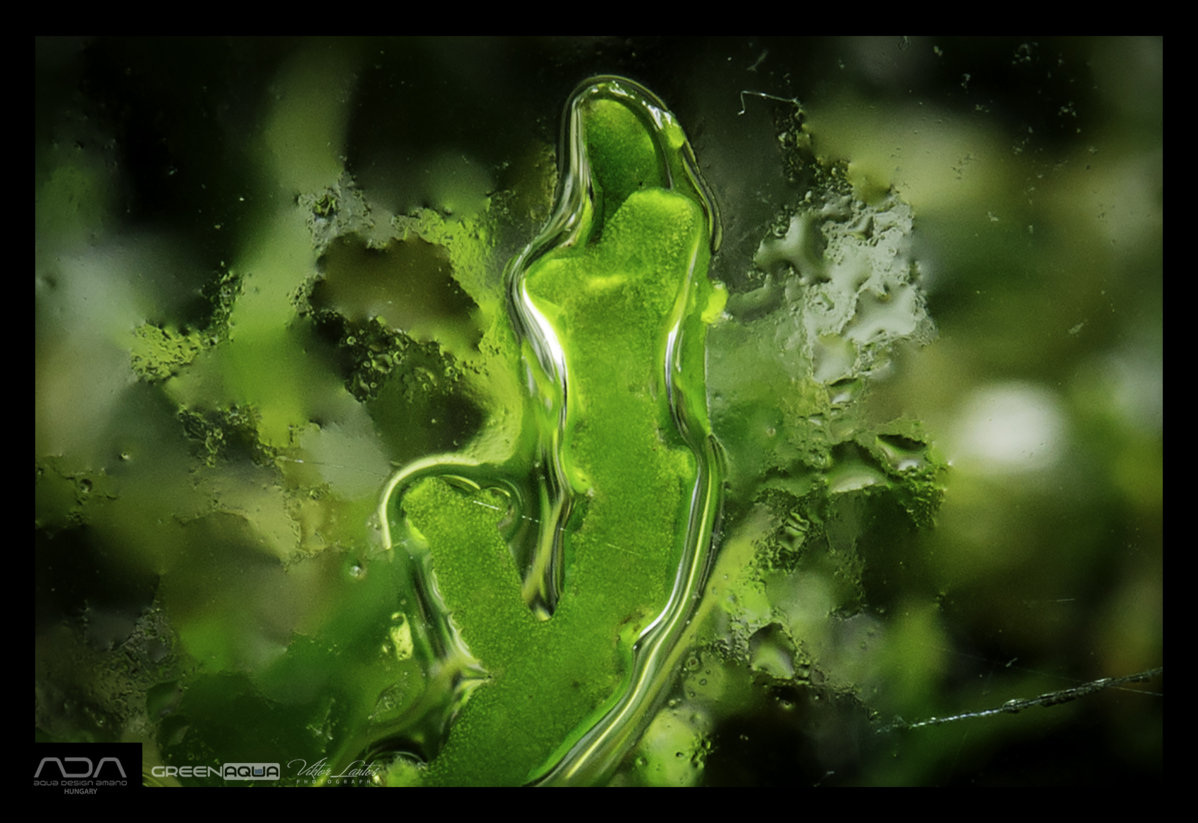 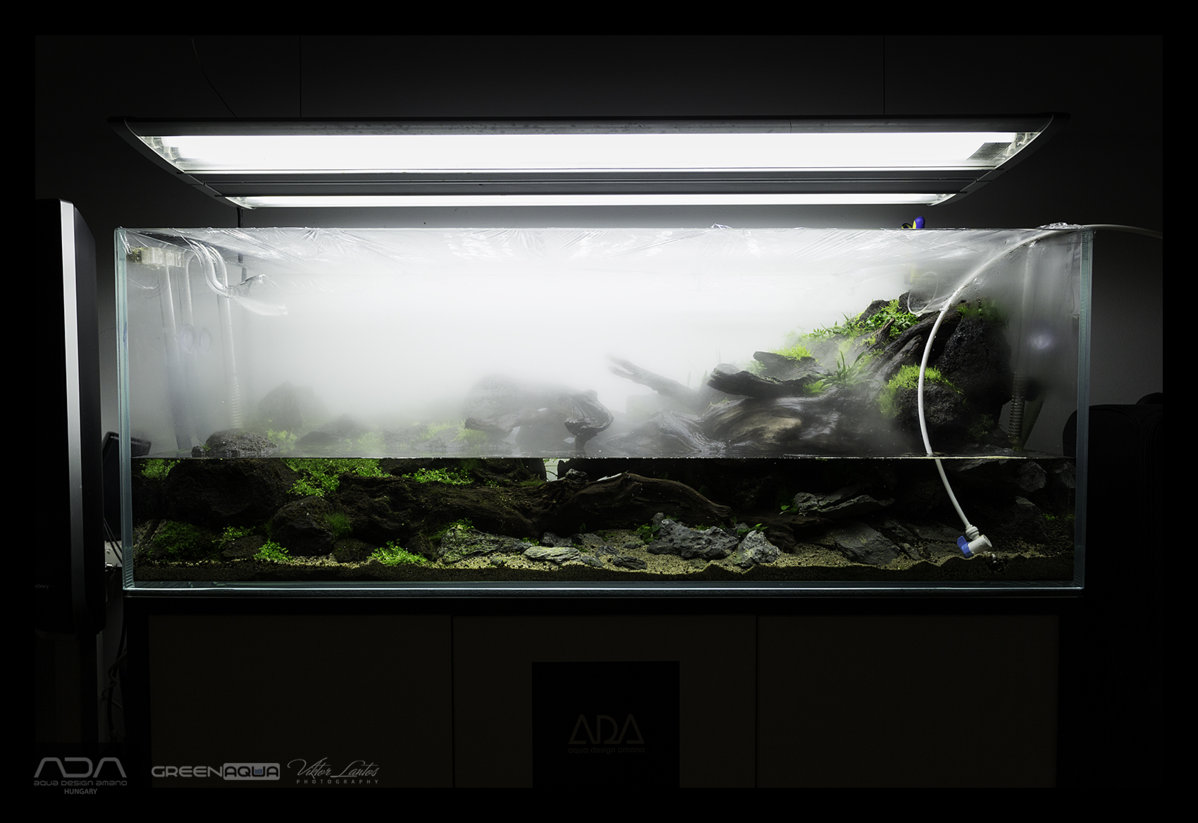 Gladiator shot from the flame moss 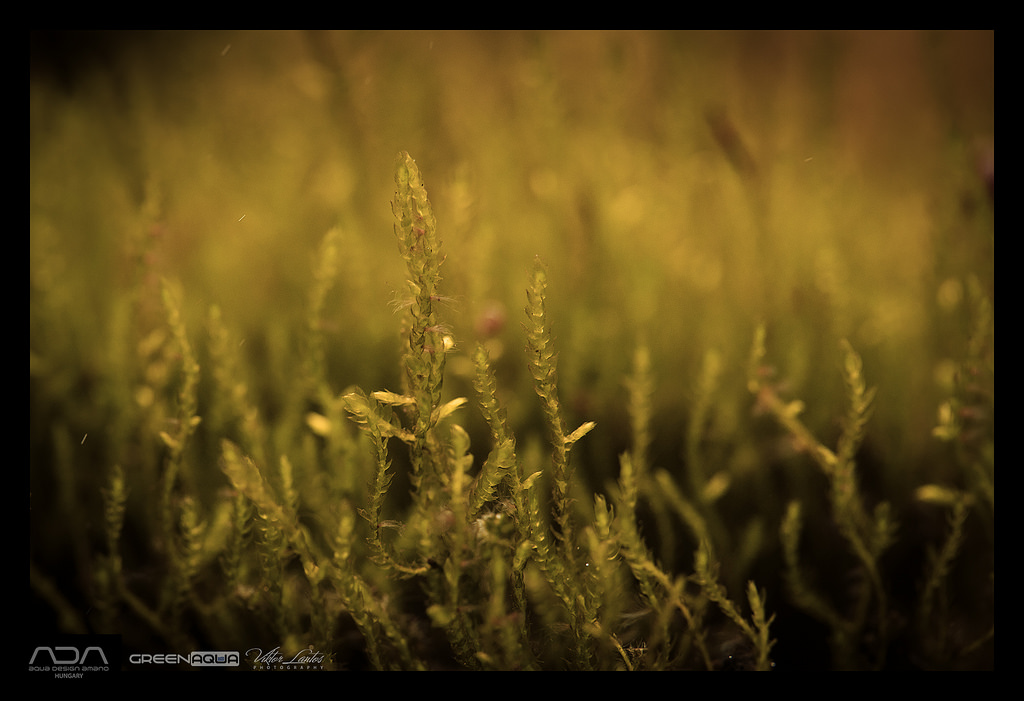 My lovely daughter spent some time watching this 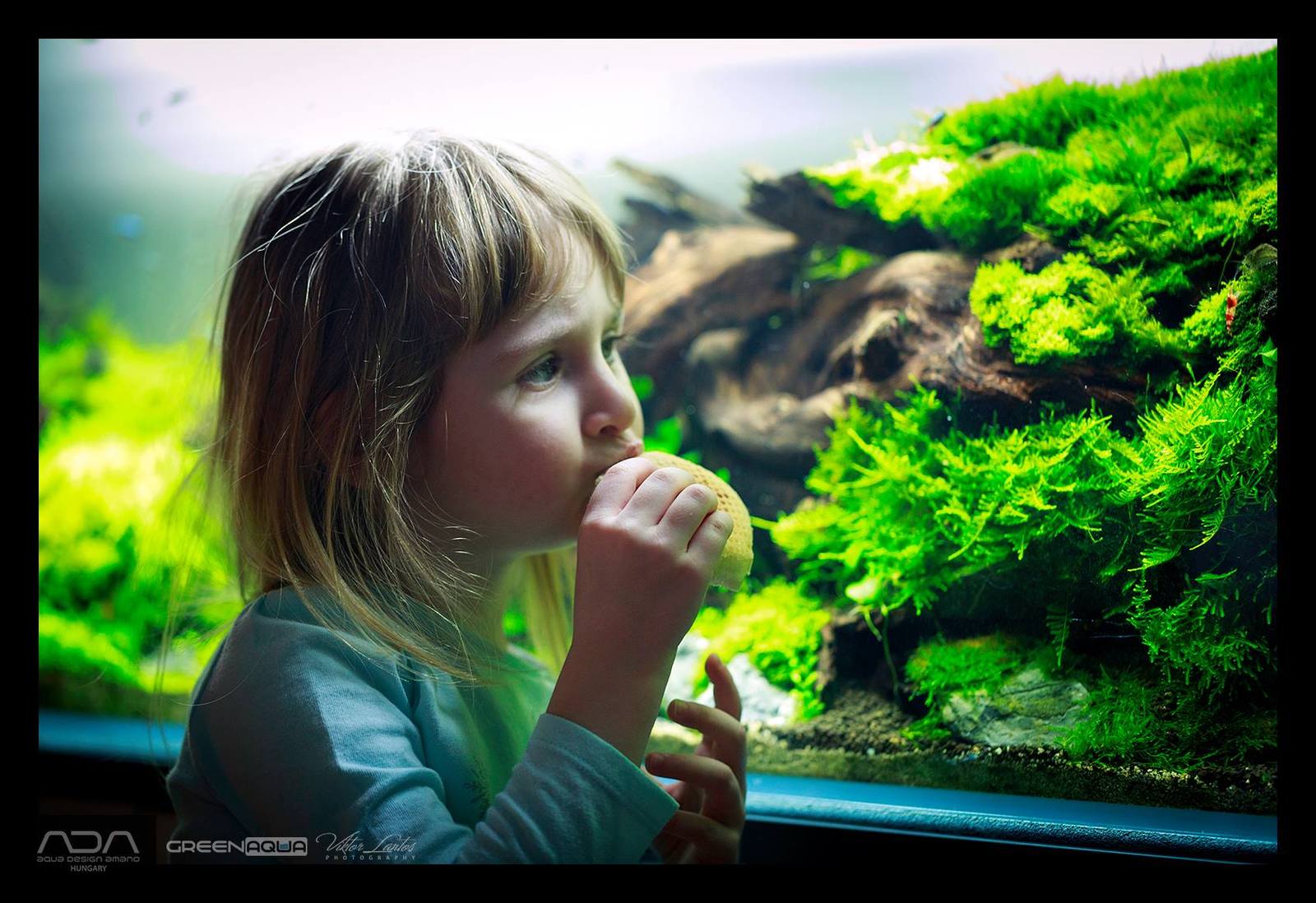 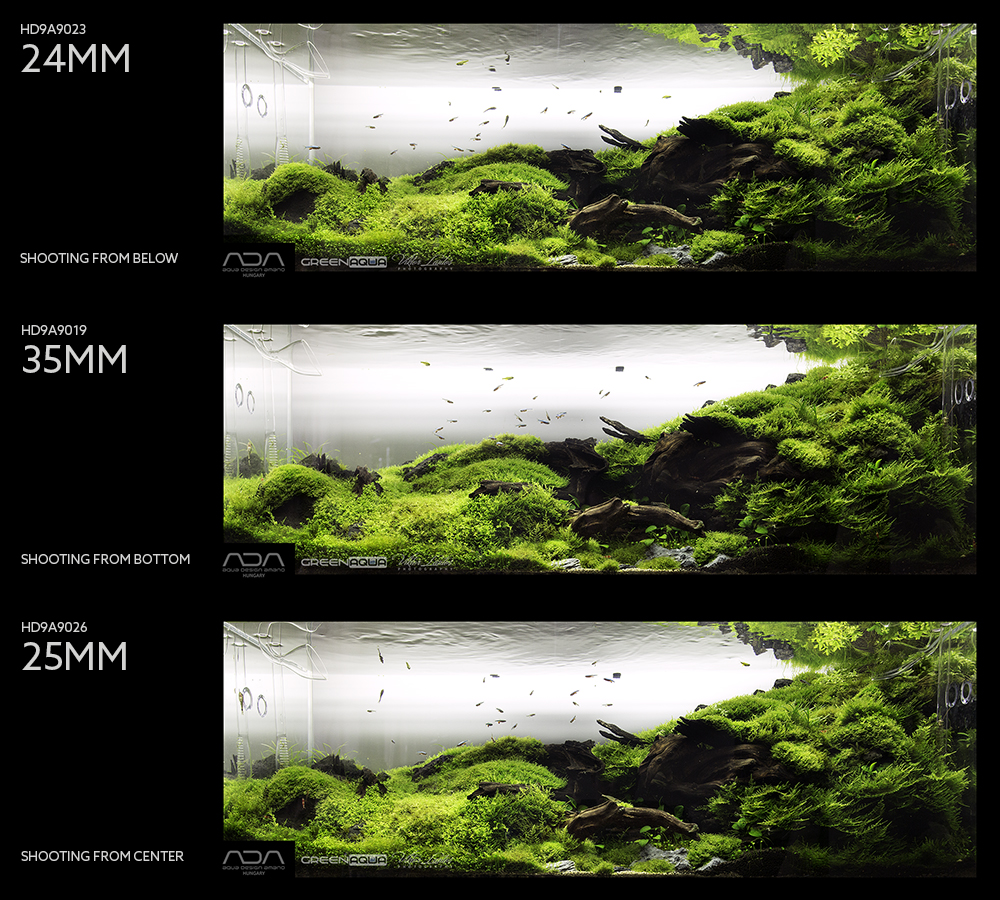 how much the background added to the space. with and without.