So, after a few months of chasing after problems in my tank, I've turned to a new vision of what suits my needs. That is, a lower tech tank requiring less high demanding plants and turning to crypts et al.

Dosing:
Using the EI method, not worked out as yet how much.
Will dose 5ml of EasyCarbo each day. 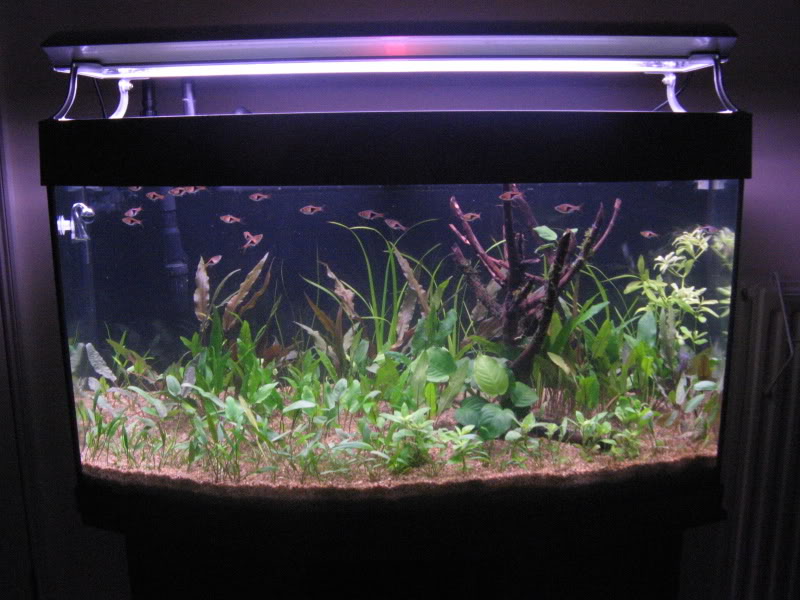 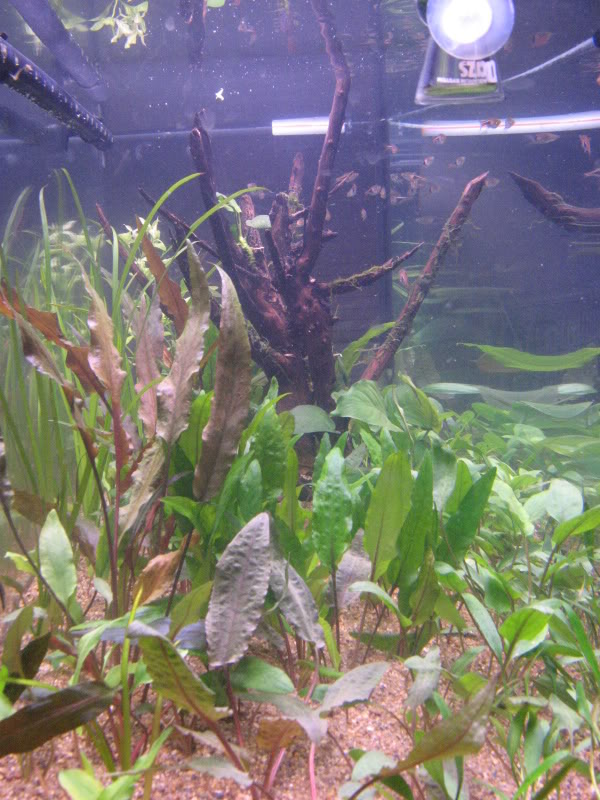 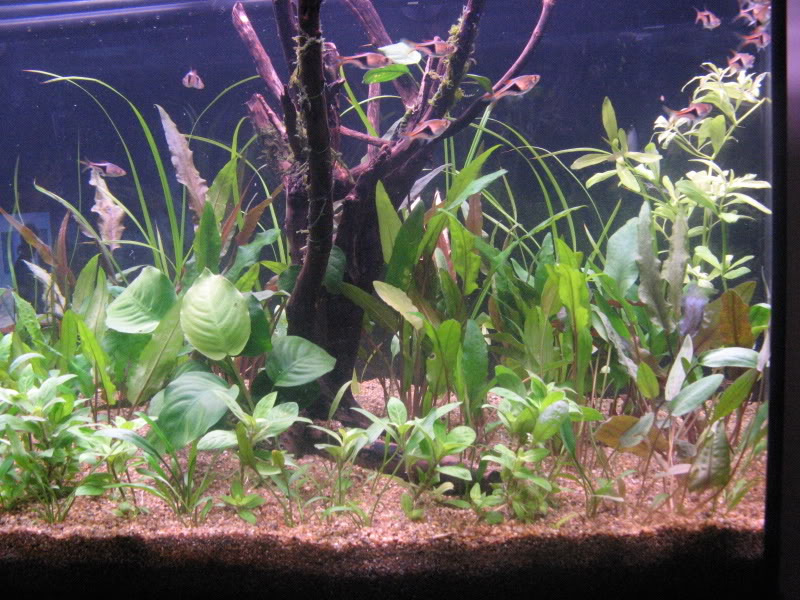 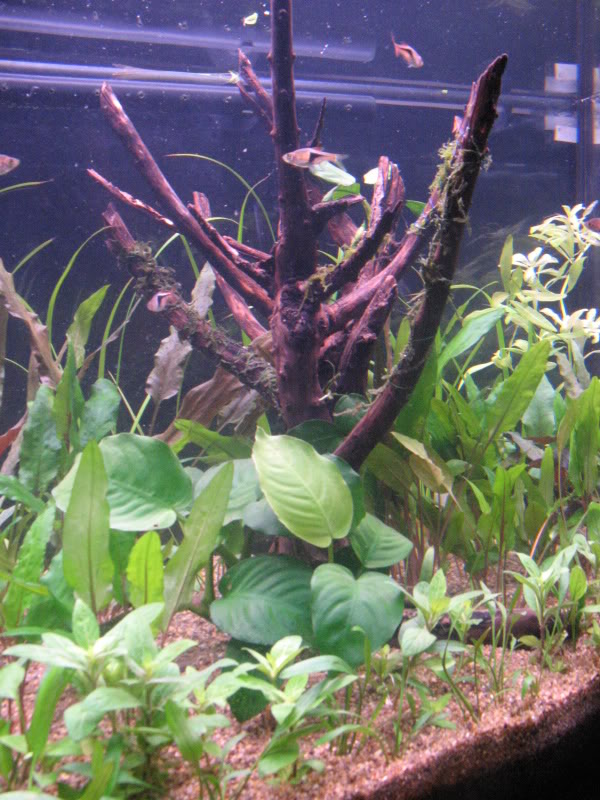 Comments:
I still have a few crypts to arrive from ukaps members so it'll look fuller in a few days.

I thought I'd try growing mosses on the wood I have, hopefully, I've positioned it right. I might look for a similar piece for the left side in the future but see how it goes.

I've planted the Cyperus thinly at the back, I think I've moved away from the curtain look on the back with the vallis and using the the taller background plants in a more tinner way.

I thought I'd try Cyperus Helferi as it looked good in the shop and would be a replacement for vallis in the longer term. I'll be looking to remove the Hygro. Polyserma once there's a bit more plant biomass.

I would like to floating plants, but couldn't think of anything suitable.

I know this will take some time to develop, but hopefully, as I've had good results from crypts in the past, this will in the future turn into something I can be proud of rather than an algae magnet.

I welcome any comments, suggestions and/or feedback on this.

Thanks,
Clark
My Nano Journal

I would say your planting lacks any real structure to it.

There appear to be all manner of different Crypts all over the place. By trying to group the same type together you then get to see the form and texture of each type, rather than a general melee of different types.

I appreciate the scape still needs to fill out, but try to give the scape some kind of organised structure. Maybe you could either make the existing piece of wood much larger by tie wrapping additional branches to it, or balance things out with a larger section of wood to the left.

I know what you mean, I too would like to move to more of a structured layout.
I think that'll come over time once I've worked out how things grow for me.
At the minute it is set out as small at the front to taller at the back.
My Nano Journal

It's nice to see an aquascape named after a shopping centre!!

I can see where Dave and Egmel are coming from, a group of the same crypt in a 'drift' looks better than different varieties randomly mixed, but in this case it's difficult to tell where they're planted.

Do you have a planting plan? Some close ups of the different varieties and where they're situated would be good.

Where did you get your plants BTW? I'd love some C. helferi but can't seem to find any locally.

Dude! you JUST got this tank running properly!

Sorry to bash you mate but i have to agree with the others. How about having a clearing on the left and bunching the larger crypts closer to the rear and base of the wood, then graduate in stages towards the clearing? Just a thought.

Looking at the first pic, they don't look that random to me. They are grouped to a degree, it's just sparse as they haven't filled out, seeing as it's like day 1.

They are crypts remember, may take a bit more than time to fill out... what to describe longer than time?

Hmm,I don't know much so am reserving judgement a tad.But I can try and imagine it grown out a bit.I think it will look fine,apart from as it stands at the mo,it looks a bit 'big' at the front.

Again, thanks for the comments.

Fingers crossed, crypt melt isn't too much at the minute but then most of these crypts were already in my tank but just shoved in a corner - rather amazing really when you see how many plantlets there were.

Yes, it is named after Cribs Causeway in Bristol, thought it was a good name as I'm there rather often shopping!

I think I'll have a move about soon, but just don't want to upset it too often, maybe will have a replant at the next but one water change.

As you could prob see, the only planting plan I had was, tall at the back and round the wood and then going smaller to the front where the parva is. I've also planted some of the Cyperus Helferi around the wood and also some of new shoots from my Vallis in and around the crypts near the back to see what it'd look like when they grow.
In hindsight, I think I should of had more bunching and will try and get a bit more of that in the future. The main aim of the replant was to try and stop it being an algae magnet that it was previously!

I'm thinking about wood (oooh err!) and see if I can find some similar bits this weekend, if not then I might think of putting it in the middle to create an island type? I put it on the right hand side as I thought that putting it in the middle might be a bit too much of a focal point and I don't really want to wood to over dominate the tank (as apparently, I don't like wood!)
My Nano Journal

Crypts are my favourite plant, so I'm gonna love this tank!

The wood isn't working for me at the moment... I think you either need a similar bit to echo it on the left. I don't think it will work as an island in the centre because it's too tall and thin. Y.ou never know though

One week in update...

Well, this week has seen me keep on top of a few incidents of crypt melt, which to be honest hasn't been much. I've managed to maintain my dosing regime this week which is a good start!

Today was water change day and managed to add 200mls of Seachem Purigen to polish the water before it returns from the filter. In addition, I'm rearranged my filter media in a more organised structure, as follows (in order of water hitting it)

I've been told that my first wool is not really needed as it'll clog, but this was after I put it in. At the next water change I'll remove it and see what effects that has on the water clarity.

I also added three new additions...
+ Nerite Snails - seen as they were bought on the way to the Top Gear MPH Show at the NEC (bought from MA in Worcester - fantastic customer service as always!) they are called , Jeremy (Clarkson), Richard (Hammond) & James (May)!
+ Amazon Frogbit - always wanted a floating plant, saw these too at MA in Worcester and for Â£1.75 seemed too good to say no.

Plants are showing good signs of new growth, most crypts have new shoots coming up which is encouraging. Anubias' are going great too and Cyperus Helferi is getting taller. Although the tips seem to be getting a bit burnt in the night.

In summary, a very successful week with my new arrangement. Fits in with my life rather than trying to force a tank in my life. TICK! 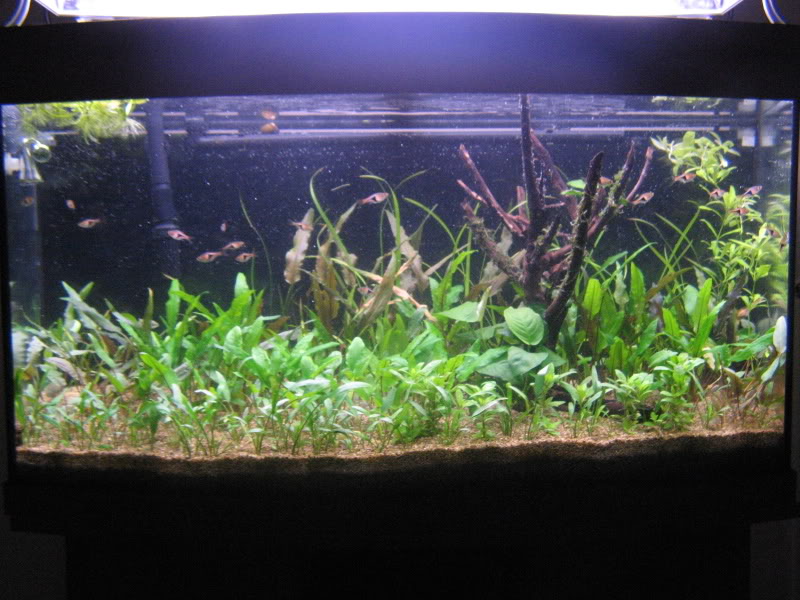 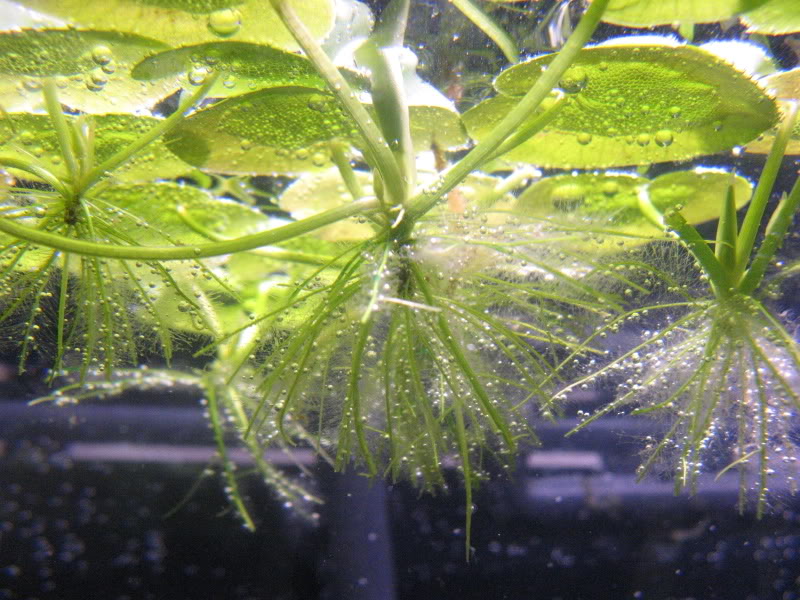 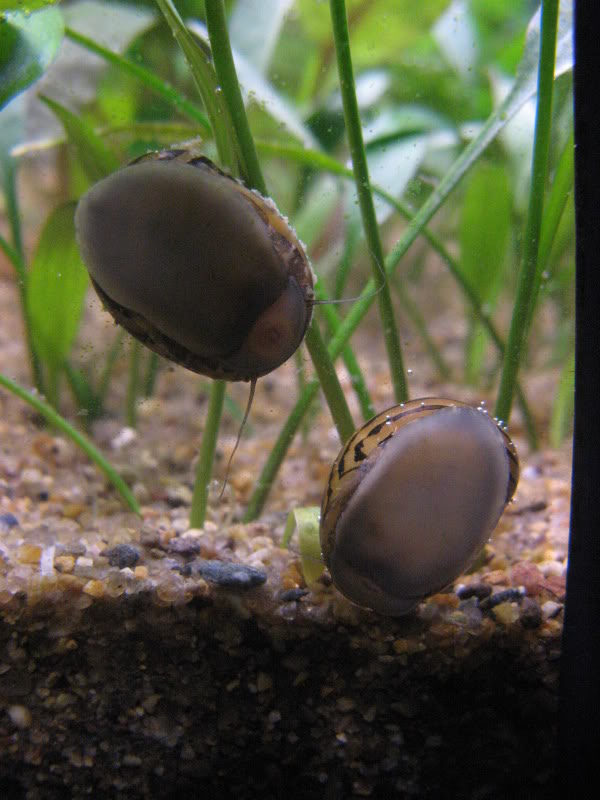 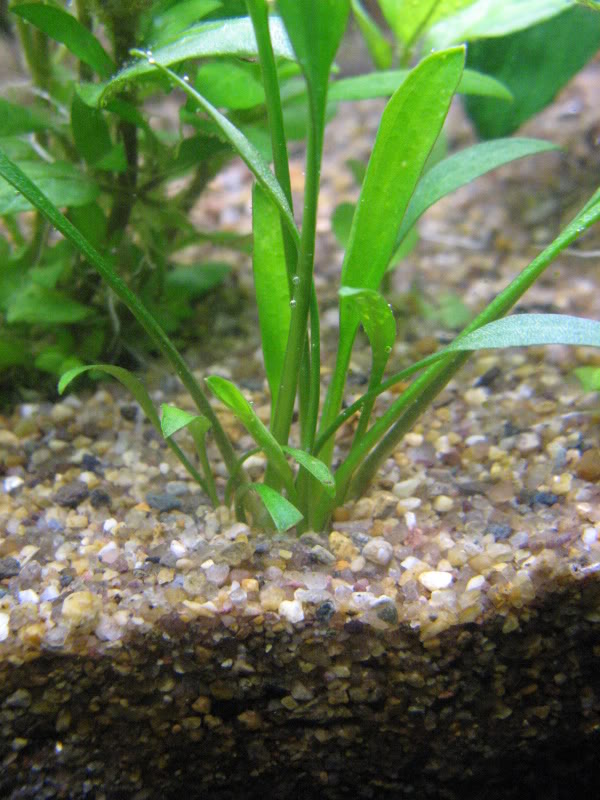 New growth on Crypt. Wendtii - although which one?! Tropica or Brown?! 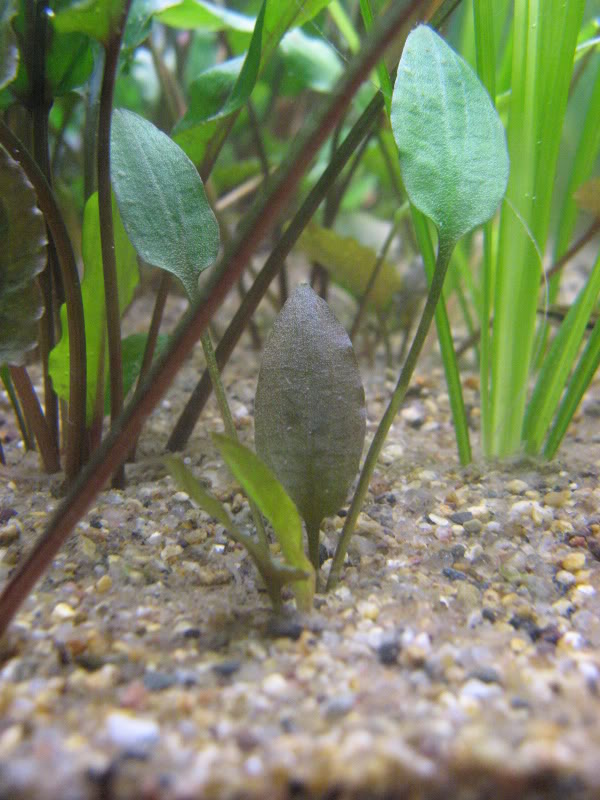 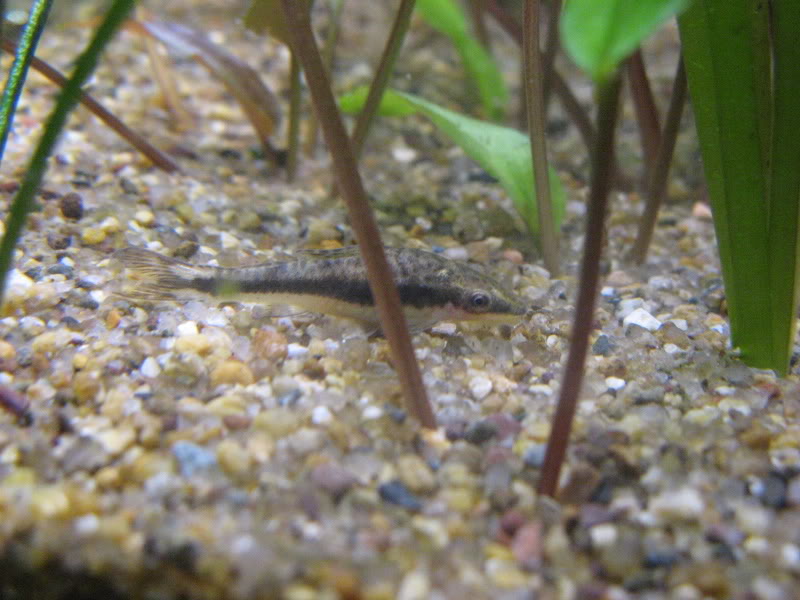 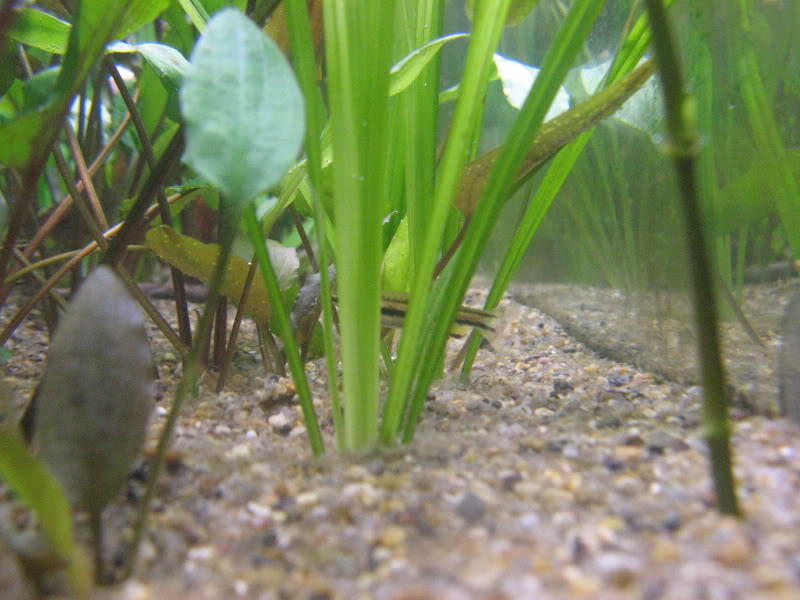 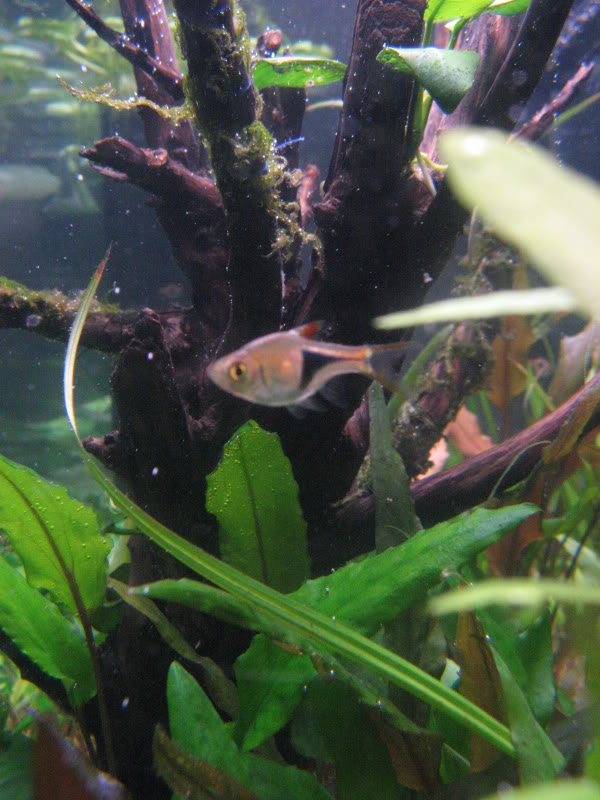 Wow, it's amazing how much growth you've had! I'm liking how this is gonna turn out, I'm a huge fan of Crypts/low-tech/jungle scapes so I'm watching this carefully.

I'm not really feelin' the wood though. I don't think it does much for the scape, if anything it's distracting.

Thomas McMillan said:
Wow, it's amazing how much growth you've had! I'm liking how this is gonna turn out, I'm a huge fan of Crypts/low-tech/jungle scapes so I'm watching this carefully.

I'm not really feelin' the wood though. I don't think it does much for the scape, if anything it's distracting.
Click to expand...

Thanks Thomas, I've found that I've always had good results from Crypts and that's why I've turned to them.
There is some mosses attached to the wood, so once they get a hold on, the wood won't be standing out as much.
I think, once I've had a tidy up/rearrange, maybe it won't stand out as much.
My Nano Journal

Good to see some happy fish and happy plants,.

Well done Clark. I reckon it was a good idea to back off the lighting and it looks like you have good distribution and CO2. Remember that as you gain biomass a lot of these advantages diminish so it's a good idea to manage the growth. Love the frogbit image. Good stuff.

Thanks for the comments people.

I've notice a little white growth on the wood but will remove that ASAP. Just looks like bacteria fuzz.

Caught my Ottos on my macro lens... 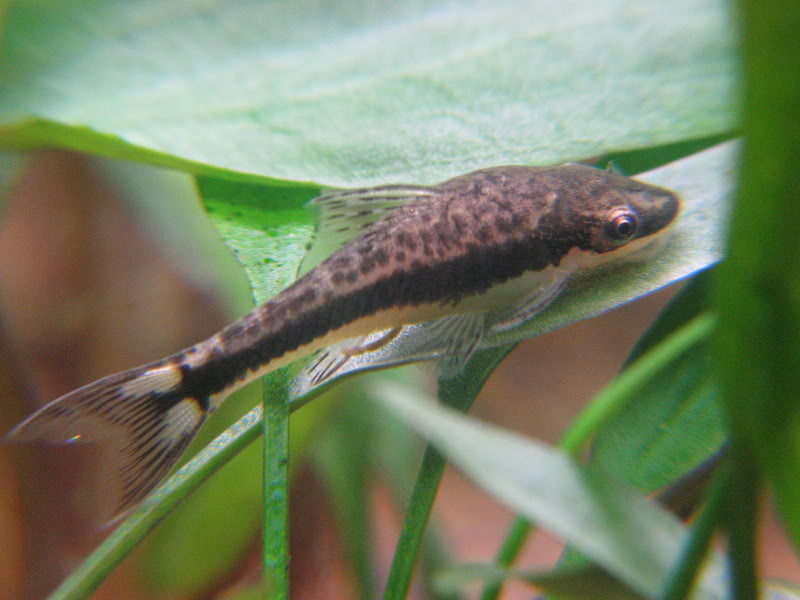