Nice one, glad the new fish are doing well.

I think the wood/fern/whatever is still a bit distracting, mainly because it's too tall in comparison to the rest of the tank, mainly the left. I think adding a few more taller plants will sort this problem out, but I suppose this will sort itself out in time when the tank grows in more.

I also think the foreground is a bit distracting, but it still needs time to grow in.

Keep up the good work!

Hi Clarke,looking lovely now, when it fills out you wont be able to swing a cat in there (or should that be a shrimp),just one tip i willl give you concerning the stourogyne sp,if you want a low growing sp then you need to trim those plants now and replant the cuttings,have fun regards john.
www.johnstarkeyphotography.co.uk

Thanks for all the positive comments.

I'm no longer of the belief that the wood "stands out" as you say Thomas but each to their own. Having the fern around it and the anubias at the bottom, I think is good.

John - thanks for the comment about the Staurogyne sp., I'm not wanting it to "carpet" but fill in so it's about the highest I want it now.

As I said, that's it now unless there's a disaster, so I'm leaving it to grow in naturally and will try and breed my CPDs. With this time of the year, just need to be careful on the money side of things.
My Nano Journal

Things seem to be going well, still having some crypt melt but nothing too much. Maybe it has been down to the fact that I've not been around to dose as much. Although on the previous days I up the dose to compensate.

I'm still getting surface scum and returning from my parents from Christmas it was like covered in the thick film rather than the skin that has been there previously. It seemed to effect the plants too as soon as I removed it, they started pearling.

Around the top of the wood possibly near dead spots, there has been a bloom of Rhizoclonium (brown fuzzy algae), I removed as much as I could at water change but reading Jame's Planted Tank - Algae Guide the causes are listed as "Low CO2. Low nutrient levels. General lack of maintenance." Therefore, without dosing EasyCarbo for a few days must of caused this.

In addition, the Staurogyne sp is slowly getting covered with brown bits, possibly due to them being in front of the wood and flow being compromised around it. I'm monitoring it with my drop checker to see if co2 is ok around there and then deal with the readings post it.

I have noticed that as my cyperus helferi melts at the top when it grows, it certainly doesn't like to be in the flow of the spray bar, so will keep cutting it when it gets to a height and will look to replace it with a hardier plant to flow in the future. Maybe a stem plant but I'm not in a rush as I'm trying not to spend much on this tank for a while.

On a sadder note, one of my dwarf pencilfish died and has disappeared. Poor thing, couldn't find it at water change. Again, I'm not looking to immediately replace the little fella, and maybe in the future would get another type of pencilfish to replace him. I'm always worried about stocking levels in a planted tank, and I think I do overstock on the usual surface area "rules" but know that I overfilter and the plants help to deal with the nitrate.

You never know, if my plans of breeding my CPDs work then maybe I could fill the tank with them!
My Nano Journal

I'm sure you'll get over the algae issues soon enough. It's all about finding that balance and if you get out of the routine then it'll get in.

Shame about the fish. It's good that you're gonna try to breed the CPD's, I would say fill the tank with them! Pencilfish and CPD's seems like a weird fish pairing but I'm sure it looks great!

Thanks Thomas, at least its a small bit of algae compared to what happened before.
I know what you mean about the Pencilfish and CPDs, they both tend to hide for most of the day but when they come out when the lights on they're beautiful.
My Nano Journal

Superman said:
I know what you mean about the Pencilfish and CPDs, they both tend to hide for most of the day but when they come out when the lights on they're beautiful.
Click to expand...

Yeah, but then I think that has a naturalness about it and goes with the jungle feel of the tank aswlell, it probably looks great! Keep up the good work!

Superman said:
I have noticed that as my cyperus helferi melts at the top when it grows, it certainly doesn't like to be in the flow of the spray bar, so will keep cutting it when it gets to a height and will look to replace it with a hardier plant to flow in the future.
Click to expand...

That's odd Clark, mine loves to wave in the flow benefiting from all the CO2 and nutrients passing by, it happily trails along the surface. My advice on C. Helfrei is never to trim the tips - damaged leaves often rot slowly back and there is little you can do. Try letting some new leaves grow uncut and see how they cope? Its a funny plant, I never can tell its growing except by comparing photos, but grow it does and the roots are impressive!
---
Ray
Always learning ... [Active] 10l nano DSM See my 200L 90cm tank journal... See the rescape of that 90cm

So its been a while, been concentrating on setting up my CPD breeding tank.

Recently, I added 3 Red Pencilfish along with another 3 Ottos. They've settled in well and in particular the pencilfish have coloured up really well.

Plants wise, things continue well. I've had no massive problems, added some to there from donations from users. Dosing regime continues but I've stopped dosing Easy Carbo to see what happens. Nothing really apart from the return of green spot algae but nothing major.

The java fern has got so many plantlets on it now that I'm thinking of rearranging everything and take those off and add to the wood. I'm trying to get some more wood that would suit the tank a bit better (ie more place for the ferns).

The crypts have bulked up well and in places I think it's too much of a jungle so everything points to a bit of a tidy up. I might do that at the end of the week (see how it goes finding wood).

So here's a few photos, one full tank one of the java fern. Notice I'm trying to blacked out background alÃ¡ Saintly et al. 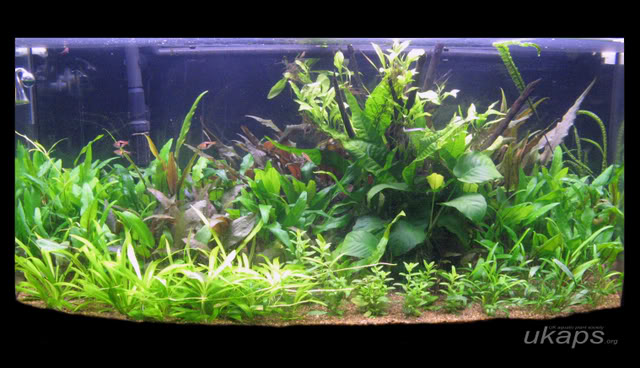 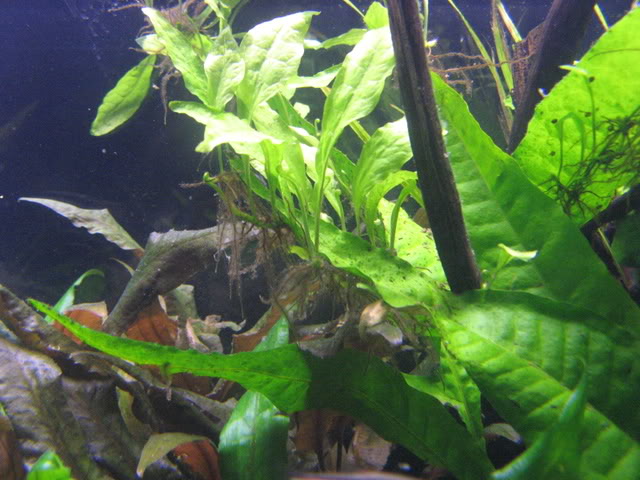 Edit:
I forgot to add that I'd like to rearrange it so that there's a bit clump of Java fern where it is at the minute and flanked by two/three clumps of undulata and then clumps of others dotted around. Watching my crypts grow over time has led me to believe that larger clumps the better and so that large clumps together will have more visual impact. At the minute, that visual impact is lost as there isn't enough space between clumps. On reflection, even though I thought I put them together, I didn't do it enough! I don't have anything like this as there's no space for the leaves to like flower (?!) if you get what I mean.
My Nano Journal

loving the logo too 8)

i give it a quick saintly

its a lovely scape superman! 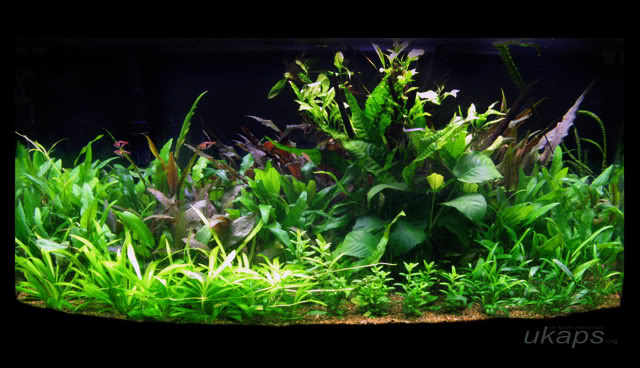 Bugger me! Please let me know what you did in Photoshop!
My Nano Journal

Superman said:
Bugger me! Please let me know what you did in Photoshop!
Click to expand...

this and that. literally a 60 second make over. i may do "quick remedies "thread for jpeg users

dodge and burn tool ....you want the burn tool.

this and that. literally a 60 second make over. i may do "quick remedies "thread for jpeg users
dodge and burn tool ....you want the burn tool.
Click to expand...

Yes you should do that thread!

Burn baby, burn. You-kaps inferno! (It's not that bad when you give it a quick burn) 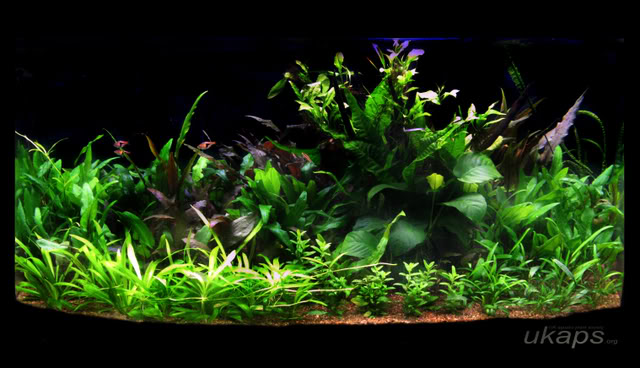 Superman said:
Bugger me! Please let me know what you did in Photoshop!
Click to expand...

this and that. literally a 60 second make over. i may do "quick remedies "thread for jpeg users

dodge and burn tool ....you want the burn tool.
Click to expand...

you should start that up saintly, itl be great, peope could make a small donation to uKaps so your time isnt just for free, becuase when my tank is up and running i would love a pic with a black background to show to my mates with N.Parker (then the year) on it.

i may do when I'm not so busy. they really are basic skills though. nothing too flash.

but still, i could show a couple of simple things, not necessarily to the book, but it does me proud..... hey,I'd be giving my secrets away

Hi Clarke,nice to see you have looked after all those crypts i gave you

,seriously i think you have made a nice job with the layout,its a nice easy to look after setup,regards john
www.johnstarkeyphotography.co.uk
T

This tank is looking well good, nice one.

Thanks for all your comments.
Whilst I sit here, I don't fancy doing anything major to the tank, don't want to upset it!
I'll just remove the wood to replant the ferns.
My Nano Journal

Superman said:
I don't fancy doing anything major to the tank, don't want to upset it!
Click to expand...

it's now one of my faves on here. its not often i have a fave too
You must log in or register to reply here.
Similar threads