Its going to be built out of acrylic, and a friend has already computer cut all the pieces for me at his work. My first question is what is the best stuff to use for gluing the acylic tank together ???

I have aquarium sealant, but it doesnt mention acrylic on the instructions, just glass. Will this be OK to use ?

Heres a sketch of the setup (the heat cable may not be used, but is an option) ...

There are three basic types of adhesive for acrylic. The first and most common is the thin watery solvent type that you can buy from EMA in tins or smaller bottles from model shops. It's usually based on trichloromethane, dichloromethane or chloroform. It can be applied to joints by paintbrush and the capilliary action draws it into the joint where it dries by evaporation. It's good for general fabricating where there are close fitting joints and for laminating relatively small areas, a 44" passenger pod being the sort of thing it's good for. It will also stick ABS and Styrene so you can use it to stick on all the accessory panelling neatly. It's not good for laminating large sheets because it needs to evaporate to work and this is obviously inhibited with large sheets. It's also a bit tenacious for thin styrene so use it sparingly with a small brush or otherwise you can find dimples in your panels weeks later as the recently dissolved plastic dries out thoroughly and shrinks slightly.

The second type is called Tensol cement and comes in two forms, air drying and catalytic. Both look and smell the same, basically a thin syrupy clear liquid. As the type suggests, one is air drying and the other sets by chemical reaction when it's mixed with it's respective catalyst. The air drying one is good for general fabrication but doesn't set quite as rigid. I mix it with EMA solvent adhesive to really thin it and use it on the wooden cores of the leg pods. It thins it sufficiently well to soak into the wood but not so thin that it doesn't grab the perpex sheeting that the blocks are being clad in.

The stronger of the two is the latter catalytic type. This needs mixing before using and once mixed will only stay workable for a couple of hours. It's essentially liquid acrylic and sets as hard as the sheet. It's not as neat as the thin EMA type but for reinforcing joints and adding blocks into previously constructed pieces on the inside where the visuals don't matter, it's the best and strongest. It's also the choice for professional display case makers because once set it can be sanded and polished to match the sheet and when done properly, can be almost invisible. There is a solvent in it which helps the pieces "grab" each other but full stregth comes after the adhesive has set chemically. Both types of Tensol cement are usually available from the same stockists who stock acrylic sheet.

The third is superglue which I'm sure most people are familiar with. It sticks acrylic very well but a word of caution about the accelerators you can buy for superglue. If sprayed on acrylic, they can craze the surface. I'm not sure why they do this but it's very noticeable on clear acrylic. If you catch the light right, it looks like there's a fine cobweb of lines inside the acrylic. It can also embrittle styrene sheet to the point that the sheet breaks up without tounching it. Try wrapping a thin piece of twenty thou around something like a marker pen body, spray it with supeglue accelerator and watch it suddenly break up. The superglue itself doesn't seem to be a problem but use of the accelerator should be limited particularly if working near the windows of the CM.
Click to expand...


You should find bucket of the stuff on eBay, or via Google Shopping

Always test a small area on a off-cut beforehand

Thanks for that James, lots of useful info there I'll let you know how I get on

I got both Tensol 70, and Weld-On16 today, so will do some practise plastic welding tonight, and hopefully put it all together over the weekend

So the testing progressed quickly to building the proper tank

I now have the upmost admiration for folks who build acrylic tanks for a living - its very tricky stuff to work with !

The "adhesive" actually melts the acrylic, so that the 2 surfaces to be affixed melt together into one piece. This means there is no margin for error when it comes to placing the pieces together, and no room for sloppiness, as you cant wipe this stuff off - it starts to melt the acrylic instantly. The edges of the acrylic that are to be mated together also have to be perfectly smooth and square if theres any chance of gaining a watertight join. I found the Tensol 70 easier to use than the WeldOn16, as it is thinner and the capillary action means it draws itself into the joins. The Weld-on is a thicker substance which I've used around the base joints as you can build it up more, to form a stronger seal.

Luckily for me, this is only for a storage / growing on tank so I'm not too worried about the finish, but of course I'd like it to be good

This is where its at now - this is the base, and front panel facing towards the wall, plus the 2 end panels and a couple of strengthening ribs too: 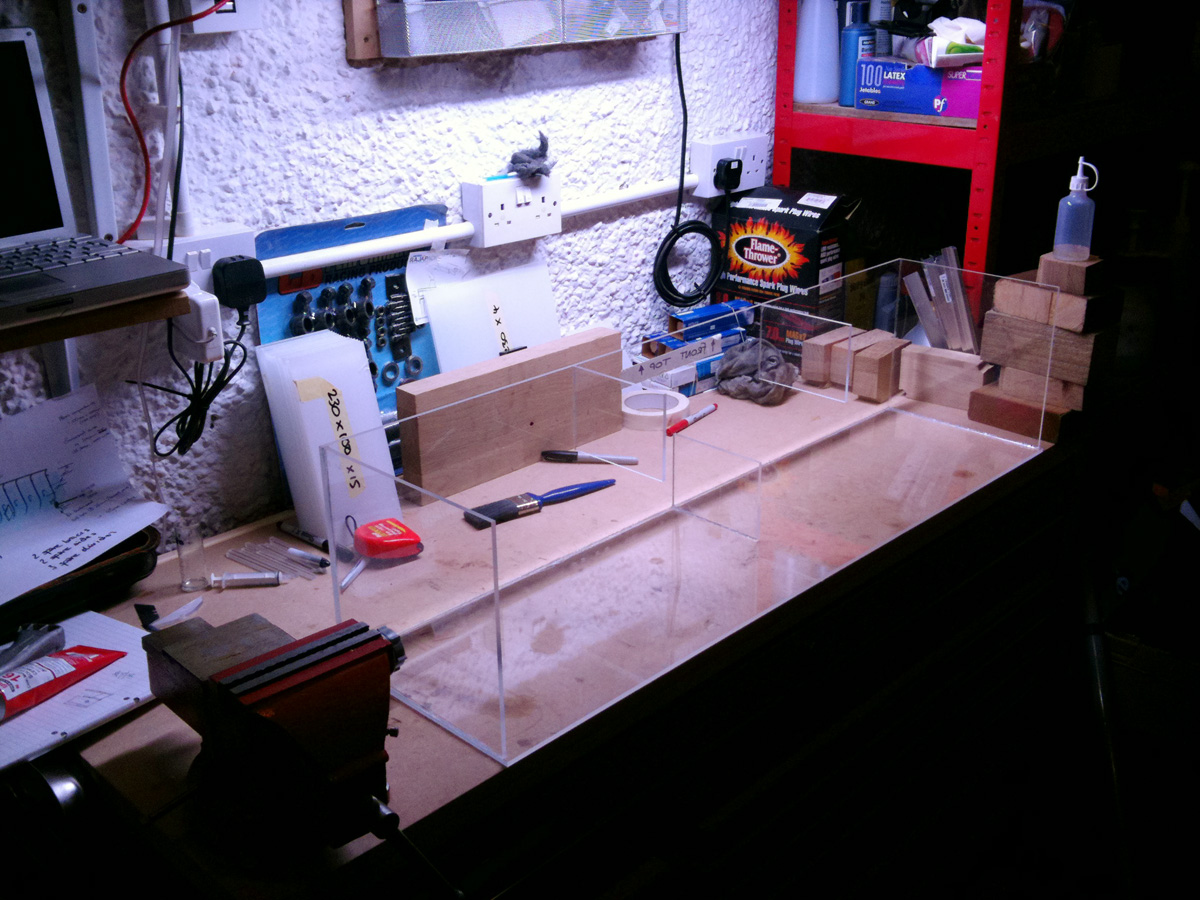 Tomorrow I'll add in the central divider and "moss compartments"

Good start bud, you're flying along!

I got the rest of it put together this afternoon, just leaving it to cure over night before a leak test tomorrow. Excuse the crappy iphone pics, but it gives you an idea !

The full tank, with lids in place: 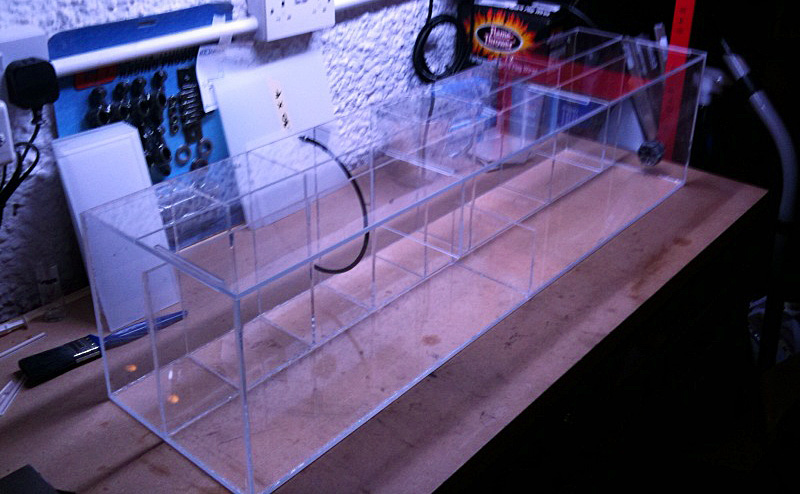 This pic shows one of the back compartments, that I'll keeping mosses in. Each will have a water inlet like this one 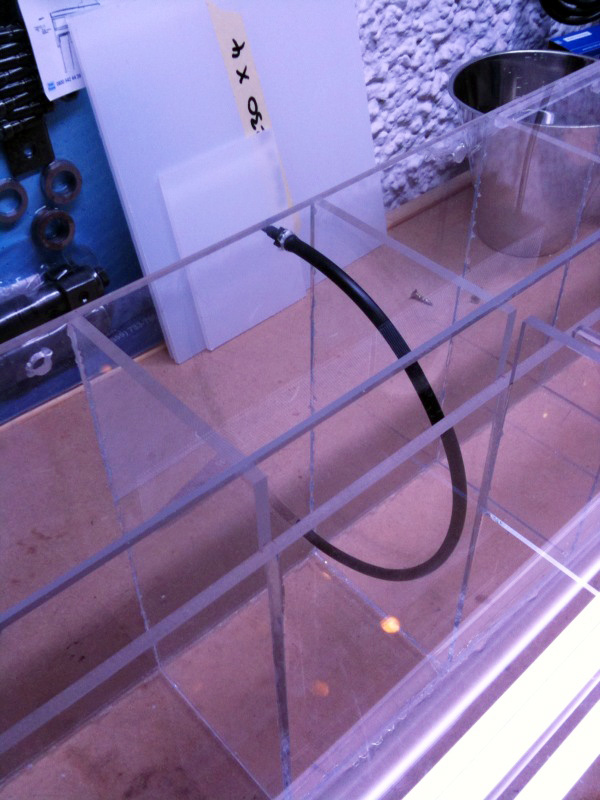 Cool Not a lot of room for access to the moss chambers though, or am I wrong? What filter are you using bud?

There are 5 moss chambers on the left which are 12cm x 12cm so I can just get my hand in there. Each moss is going to be on a branch within the chamber, so you can just lift the branch out The other two moss chambers on the right (I made it a bit different to the drawing) are 22cm x 12cm as i might use these for storing submersed plants aswell as mosses. All these chambers will be 230mm deep with water.

The front 'trough' is for emmersed growth, and is partially split in two so that the left half will have 100mm of substrate / water, and the right half will have 35mm of water in it.

I'm not going to run a filter on this initially. Instead I'm going to use a garden watering timer to open the valve on my RO / HMA storage tank and let 20 litres fresh water in every morning (thats about a 75% wc). The old water will run out to waste as it tops up. I have a spare eheim 2026 which I could add to this easily if I find it needs it, but I dont think it will.

cant beleive i only just noticed this!

it looks a very cool project tony and you must be excited as to weather it will all come together and work for you, it must be handy having a friend with access to machines that can do that sort of stuff!
good luck to you with it, im excited for you

Thanks Glenn, this certainly wouldnt have happened without my mate doing all the acrylic for me - well worth the bottle a bottle of Bushmills

The leak testing is complete, and it passed

so its now in situ, and I've just trialed the water system too. The overflow weirs are working great, and it looks like the garden timer will work a treat too, adding fresh water once or twice a day.

The inlet pipework has one small leak to resolve so I'll get onto that tomorrow night. I'm thinking of installing the heat cable in the front 2 compartments and the 2 larger rear compartments as these will house potted plants, so I'll probably add a covering of gravel too just to hide the cable and give a flatter surface 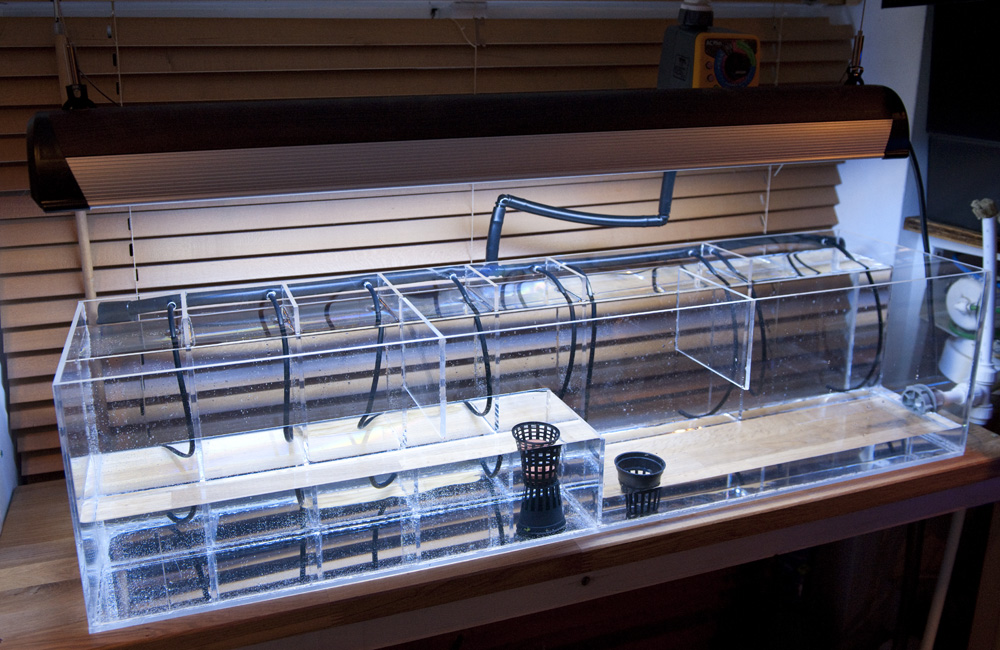 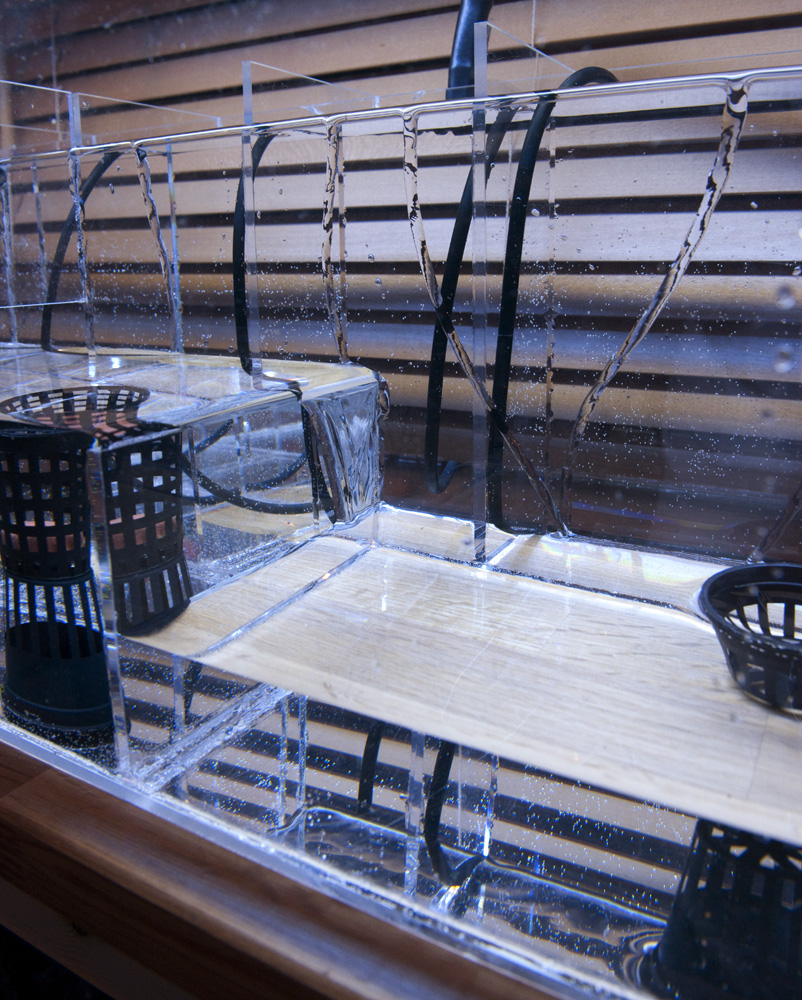 The whole system running, and overflowing: 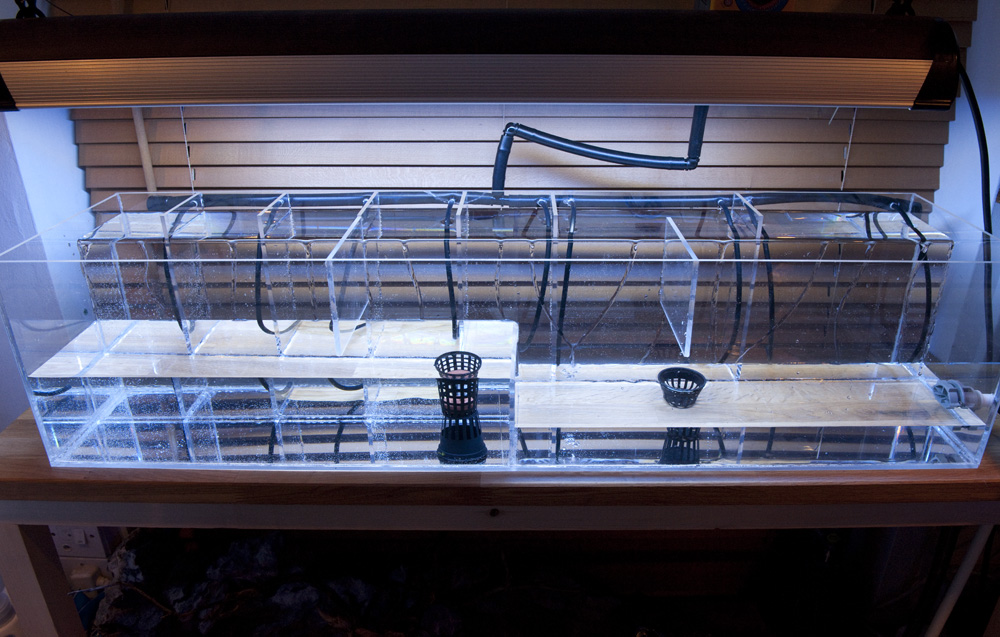 Re: Tank for moss and emmersed growing - DONE

Cant wait to see what you can grown in it!

Are you going to do a journal?

Re: Tank for moss and emmersed growing - DONE

wow nah that's a top qual DIY project.
can not wait to see the plants grow there.

Top build tony, looks really good! You have to change your name to Moss_Farm_Tonser now

I'm looking forward to getting it stocked at the weekend


stuworrall said:
You have to change your name to Moss_Farm_Tonser now
Click to expand...

Or perhaps RottingMoss_Farm_Tonser depending on its success

Bitchin mate... As always Tony, when you do something, you do it right....make me sick

wow tony thats a nice looking propogater,i wish you all the best with this project,i am sure it will work with your loving care,