Terrestrial pollen allelopathy - in my garden!

Greetings everyone,
I just wanted to share with you some weird stuff happening in the bottom of my garden.
I have a Trachycarpus fortunei palm that decided to flower this year. It's about 20 years old and this is the first time that it's flowered.
Surrounding it there is a circle of chlorotic-tipped plants. They include brambles, bindweed, nettles, and cleavers.

You might already know that allelopathy is when a plant produces biochemicals to inhibit or influence the growth of another plant. It was discovered in 1937 by Hans Molisch, and Diana Walstad made special mention of it in her book: Ecology of the Planted Aquarium. It is relevant to planted aquariums because it probably affects both <plant growth> and <the technological development of algaecides>. Anyway, I was interested to find out that "pollen allelopathy" has been <known since the 1980s>. Pollen allelopathy is possibly not that common in UK-endemic plant communities, but look at how the other plants have reacted to this non-native palm in the photograph below!

(it's a lot more visible when you get up close; - I know, it's almost unbelievable)

Reminds me of how corals sting rival colonies. 🤔
Don’t believe the hype.

Just a quick update:
As expected, the observations came and went with the pollen, the garden has returned to normal again. Interestingly, it must have been some seriously damaging compounds because the chlorotic plants never recovered. Others are now growing in their place, which implies it probably was not a nutrient issue. The privet took a complete pounding.
For the complete anoraks amongst us, I have linked to <this paper> which details many of the known compounds and species exhibiting these mechanisms. I've mainly linked to it in case I lose my copy of that paper and want to revisit this again in the future. Love you all, Simon

Are you going to sell this bio-herbicide? I've got a lot of weeds in my place, so I'm definitely interested.
Permanent aeration. No CO2 injection. No filters. Plain silica sand.

@_Maq_ : It has crossed my mind But to be honest, the majority of these compounds look to be very toxic to a wide variety of organisms.

It has got me thinking about the global decline in pollenating insects. In the UK there has been a 60% decline in the last 20 years (76% in Germany over the last 27 years), and there was a sudden drop this year (40% in UK) in most flying insects except water-bourn ones. This is currently attributed to global warming. I have been in lectures pointing fingers at everything from bee mites, to pesticides, habitat loss, nanomolecules (Royal Society theory), and solar flares. Now it is apparently the inability of these insects to survive over winter that is to blame. But what exactly are they consuming over winter. Not the nectar they get in the summer - it's the pollen stored in their wax, and probably a bit of honey too. Perhaps many non-native plant species have pollen that is toxic to native insects - in the same way that we are only just finding out that it is allelopathic to plants. Trachycarpus are in the same family as Oil Palm trees, Arecaceae. There has been over a 300% increase in palm oil over the last 20 years. I wonder whether many scientists have considered whether a change in the natural diet of insects could be to blame. It only needs to make them a bit drowsy and they miss the opportunity to get to early flowering plants, like wild garlic, hawthorn, willow and bluebells; or perhaps it reduces their sex drive, hits their libido 🍌. I'm not sure I even want to come into contact with it, until I know what the compounds are that are causing these effects. There has been an unknown increase in stomach cancer of 60% since the 1950 that nobody can account for. That was also at roughly the same time that palm oil started making it's way into consumables. Yes, this is likely to be due to radioactive fallout - but why are there no studies published on pollen allelopathy in the Arecaceae family? We are only just finding out that sunflowers are allelopathic, and I'm sure most pollenating insects love them, but they aren't exactly natural food. The more I think about this, the more I am getting boggled by the implications. The major decrease in pollenating insects is in the northern hemisphere, where mankind has introduced these plants. Rant over, sorry a bit random.
Last edited: 17 Jul 2022

There is a Swiss Research lab that investigated Plastic Nano Particles in natural food products. They found it in everything, for example in the honey and in the milk... It can only mean one thing, plastic fantastic is all over the planet, in the soil and in the plants. From the grass into the cow into the milk and from the flower into the pollen into the pollinator into the honey. How the hell does it get in the soil of a mountain meadow and in the plants? Is it in the atmosphere in the rain? Can't remember them testing rainwater... But all they tested contained plastic nanoparticles.

We know it's in everything, yet we don't know any long-term (side) effects.
Cheers,
Marcel..
Tanks for watching.

@zozo Well actually I can tell you Marcel.

I once had the privilege of assessing a company that process human food into animal feed. It was stuff that was out-of-date, surplus, or didn't taste quite right to be put on sale. The boxes of cereals, crisps, chocolates, and every manner of food, arrived in the factory floor, from manufacturers, supermarkets, and distributors from across the UK. It was then shredded, and went into a tumbler that separated some of the plastic waste from the food, before being processed and sold as a sugar-rich animal feed. Up to 0.15% of the weight was allowed to be plastics. This might not sound like a lot, but in reality it looked multicoloured and totally unsuitable for consumption. When people buy milk in a supermarket, they literally have no idea what they are drinking. When their pets get sick, they have no idea what they have been eating. Plastics are being fed to livestock. It is one of the reasons why I am predominantly vegetarian. Had I not seen this first-hand, I would not have believed it. All the while, people are going hungry, while millions of tonnes of food are treated in this way, contaminating the entire food chain and the wider ecosystem.

The <story> broke a few years ago, but nobody has really realised how widespread the problem is. Outside the UK and EU, there is less regulation and livestock can be fed massive amounts of plastics. This makes it's way from the excreta of animals onto fields, and into plant life and watercourses. It may have little to do with the rain. Modern agriculture is to blame. 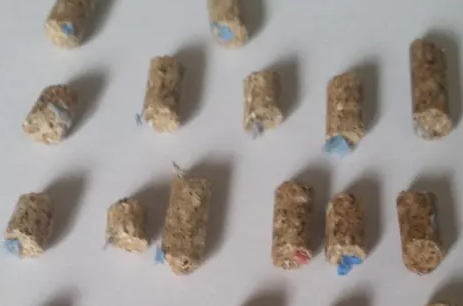