dw1305 said:
Hi all,I was looking at the CPD in this photo, before I read the rest of your post, and thinking that it looks really malnourished, to the extent I would suspect internal parasites.
Click to expand...

Parasites? I hope not.
They might be getting out competed at feeding time, but the CPD seem happy to feed from the surface.
I'm feeding them micro pellets, crushed up flakes and crushed up blood worms. Maybe something that sinks quickly would be better?

That CPD looks very weak, unfortunately they're often in this bad condition in LFS because they're very shy and can be hard to fed and get parasites.

That's why I will never buy this fishes, until an good breeder had some, I knew one but even in good condition CPD's are way to shy for my taste.

Sorry for your loss, And nice start btw.

Nice plant selection too, quite unusual!

To be frank I've not seen decent CPD for some years. Last time I bought some they all died within a couple of weeks. My guess at the time was TB. Take a look at this https://www.ukaps.org/forum/threads...-dead-and-one-looks-unwell-please-help.48395/

Tim Harrison said:
To be frank I've not seen decent CPD for some years. Last time I bought some they all died within a couple of weeks. My guess at the time was TB. Take a look at this https://www.ukaps.org/forum/threads...-dead-and-one-looks-unwell-please-help.48395/
Click to expand...

I'm half way through the second page and it's all pretty depressing. Not only are the fish in a bad way, but I might get TB from sucking on the syphon. I guess I'll be on youtube later looking at how to get the water from my lounge, to the back garden around 10m away. Advice on this would be good. The pump I use to get water back in the tank is too big for removing the water.

The CPDs I've got definitely seem the deformed/malnourished kind. I've spoken to the shop I bought them from and they're not making much of an effort to help out. Will be popping down there for the food they use, but no mention of any replacement. Not sure if I would want the same again.

As I don't like to be too negative, I'll end with what I'm hoping is good news. Out of the 4 CPDs left, there is what seems to be a breeding pair. The male is following the female constantly and doing some kind of wiggly thing. She doesn't seem that impressed, but has lots going on in the 'undercarriage' area. They both love swimming in and out of the rocky areas covered by Anubias, so I hope the eggs remain hidden. The eggs will probably get eaten, but if they do hatch, will I have a school of deformed fish?

Syphone in to a bucket with the pump attached to hosepipe

Jayefc1 said:
Syphone in to a bucket with the pump attached to hosepipe
Click to expand...

I think know what you mean.
Syphon in tank, going in to bucket on the floor below tank. Pump in the bucket takes water out through hose and in to the garden. Great, as long as the syphon doesn't run faster than the pump!
Thanks Jay

Quick Update
I took back 2 of the 4 CPDs that were left, as they didn't look right and were at the surface constantly.
The other two (male and female below) seem in much better shape, so I kept those.
Sorry for the bad pictures, they're a pain to photograph. 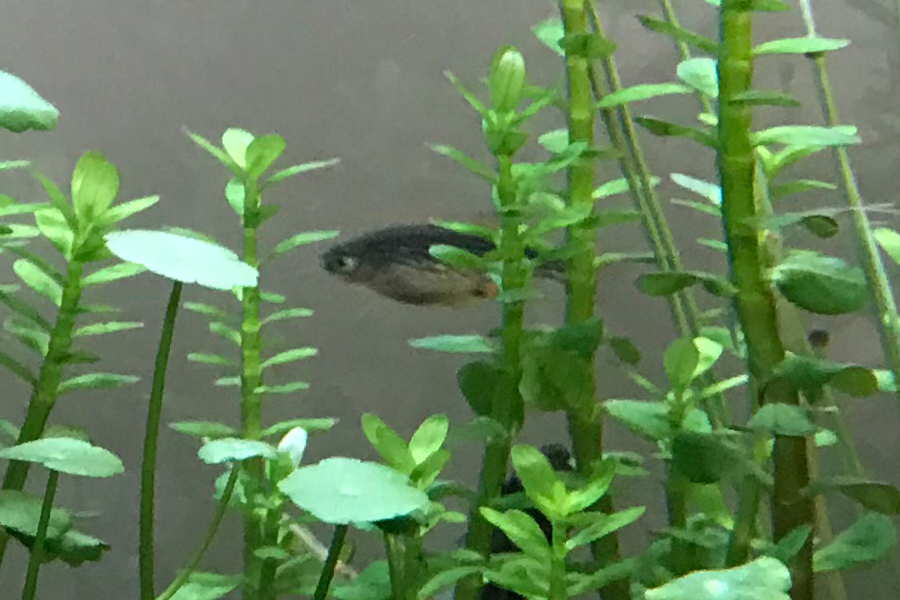 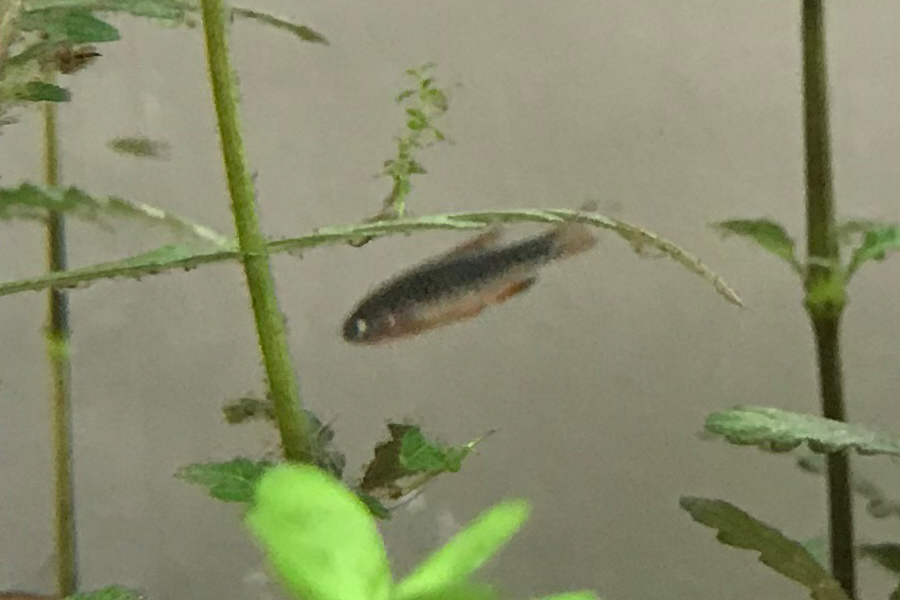 So while I was in there, I explained the situation and they were happy to take the 2 fish back.
I had a look at the CPDs they had there and there were a dozen or so that looked pretty healthy. I didn't want to just have the 2 CPDs, so I thought I would take the healthy ones and give it another go.
The top 5 were popped in a bag so I was expecting to pay for the extra 3, but no, the owner was kind enough not to charge for them.
So all I paid for was the frozen food they like. Fingers crossed tings will improve with this batch.
Small gestures like that go a long way with me, I'll certainly be back...even if they do have some sub-standard fish.

They're even tricky to photograph in a bag!
You can hopefully still see that they have a better shape and overall health. Admittedly, when I bought the first batch, it was on a sunny Sunday and the shop was extremely busy. Don't think I even saw them until I got home. 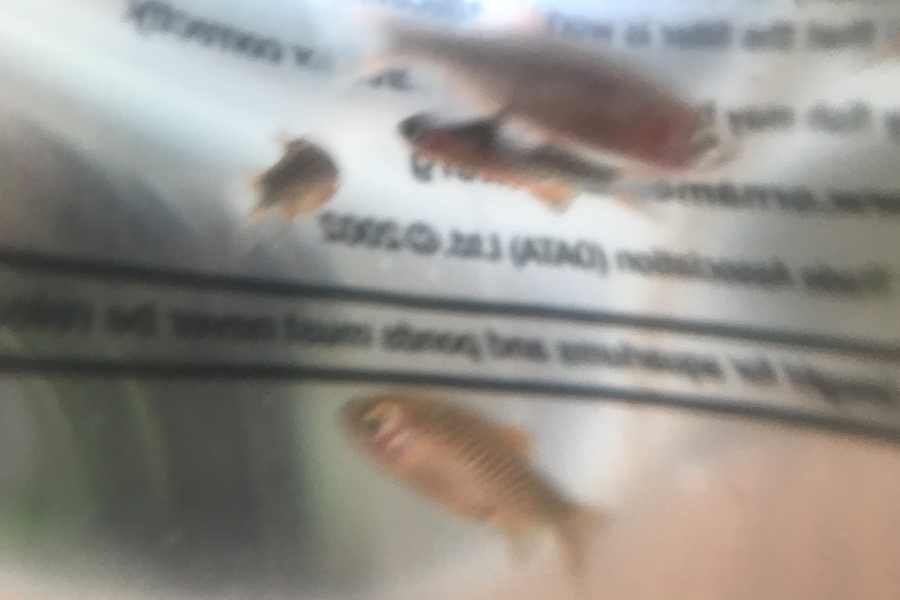 They're in the tank and we'll see how feeding goes later.

The H.Cuba arrived today and it's been grown in gel, which is a real pain to rinse off. I assume it's fine for there to be some left on it?
It's also not got much of a root structure, so will virtually disappear when I plant it.
I've got 3 pieces and I'm wondering if I should just plant them without chopping them up?
Or maybe just cut them in to a few pieces each? 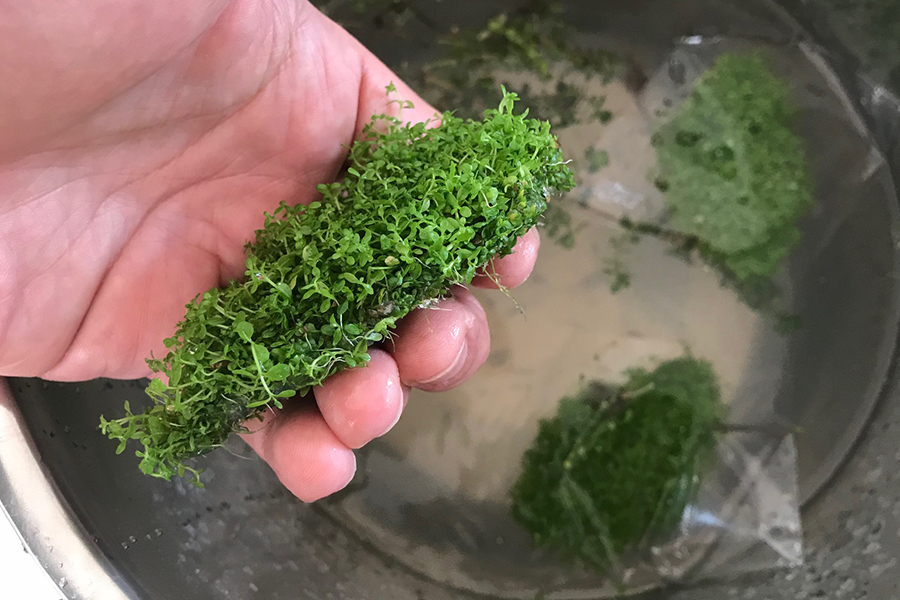 It's best to rinse as much of the gel off as possible. The best way is to do it in a sink or bucket full of water. Under a running tap isn't so effective.
The best way to plant it is to cut it up in to pieces about 1.5cm square/diameter and about 2cm or so apart. Smaller pieces are easier to plant and you'll get better coverage and quicker.
If you're planting it in a tank full of water you'll need pincettes and another implement, like a gravel rake, to hold the plant in place whilst you withdraw the pincettes.
Don't worry about the lack of roots just bury it quarter to a half in. It'll soon develop new shoots and leaves, and start to spread. 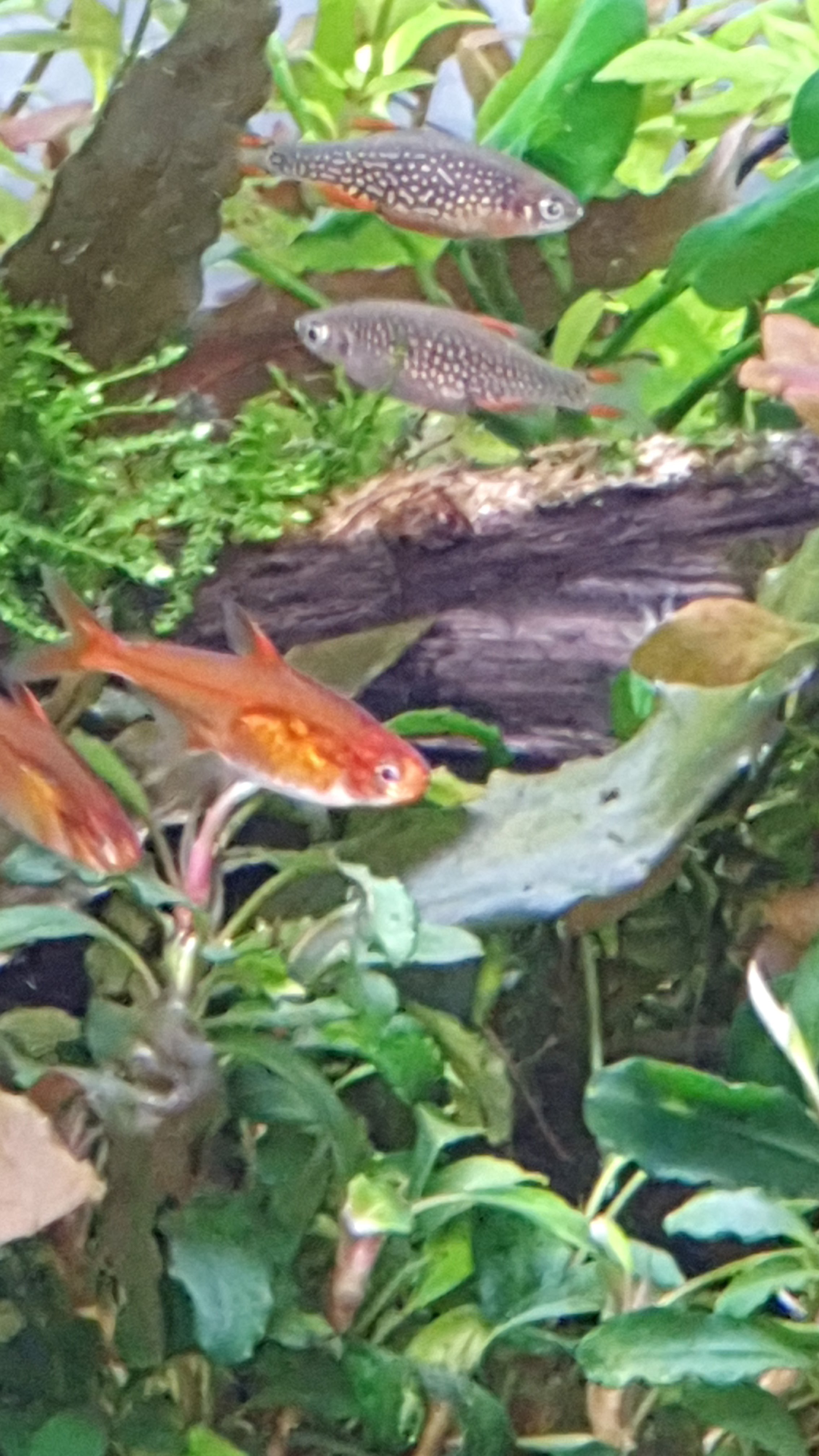 Thanks guys, will plant it up in small pieces...there goes my evening

The CPDs you have look great and I like your Ember Tetra too.

I got the DENNERLE NANOGRAN

Jayefc1 said:
I got the DENNERLE NANOGRAN
Click to expand...

I've got Micro Pellets, is that pretty much the same thing?

If you're looking for food recommendations which may help with CPD health and colour I feed a mix of the following...
General Feed:
Supplemented once/twice week with one of the following:
I think they look fairly healthy and coloured up nicely. Shy sods though and make it very difficult to get a decent photo the speed they dart around at!
It also might have a little to do with lighting. I think they look better with individual RGB LEDs rather than just white but I only have a really cheap RGB LED from amazon.

cbaum86 said:
If you're looking for food recommendations
Click to expand...

Thanks Cbaum
Feeding went very well yesterday with the frozen rotifers I bought from the shop. Along with the new healthier CPDs, there seems to be a change of dynamic in the tank. Will hopefully get some better pictures and report back.

I'm not sure if you were looking at mine or Jay's CPDs. Mine were in the bag.

I need to do a proper update, but I want to get started on sorting out my H.Cuba problem.
So after planting a bit more of it, it's looking better, but it's still not happy. It's growing, but it's growing upwards and not along the substrate.

According to YouTube, it's more likely to be a deficiency in Co2 and/or light rather than nutrients.
I've cranked up the Co2 as much as I dare. There's a borderline lime green drop checker, so the next step is to upgrade the lighting.
I made my own lighting and worked out that the max output is around 50W. Maybe the figures aren't accurate, so it's probably less than this. The new strip is double the power and double the amount, so I should have up to 4 times the power once I've upgraded it.

Here are a couple of pictures of what it looks like at the moment.
Any H.Cuba experts in da house? 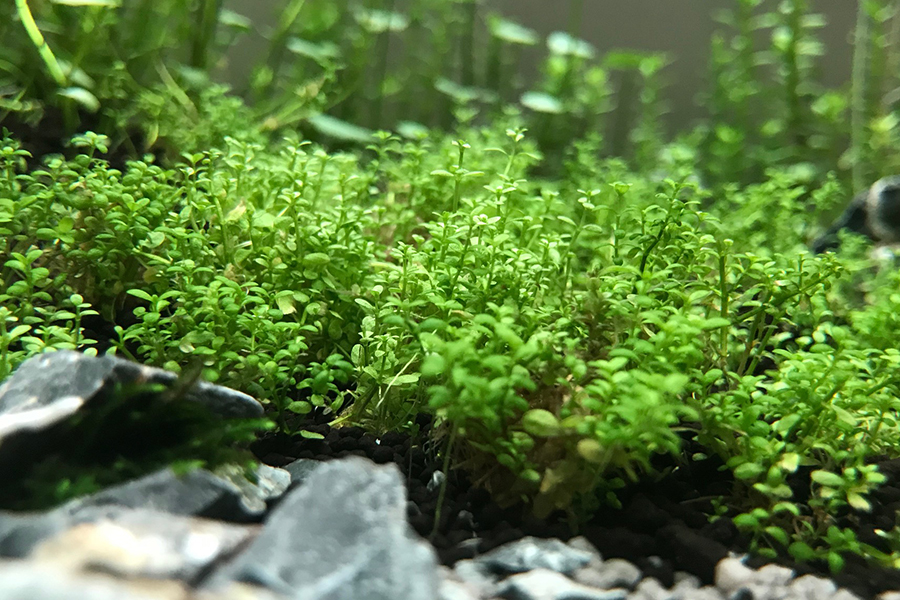 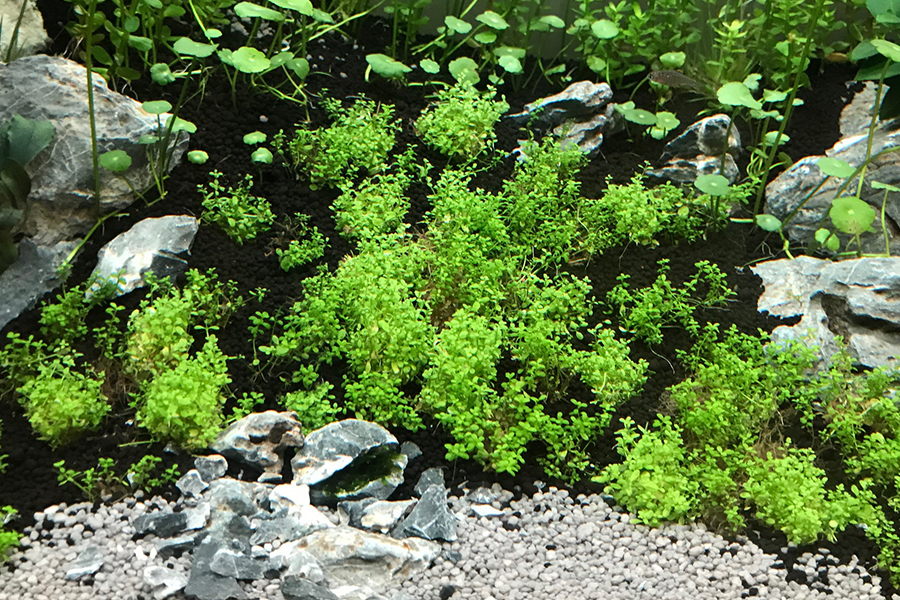 Looks quite normal to me...for the first weeks it was growing that way too in my tank: high and not spreading.

After 2 months it started to spread and getting rampant, All the gaps were filled quickly. I sometimes push it down with the palm of my Hand when WC to help getting it compact.

Effective and efficient CO2 flow and distribution is key with HC. Move your drop checker around to check for dead spots, and to make sure CO2 is being distributed evenly.
High light will make it grow faster but with patience it will carpet well with moderate lighting providing the above is right. Same with fertz, it'll uptake whatever you give it. Overdose and it'll grow twice as fast.
Get all the above in sync and it'll grow like mad and you'll be trimming frequently, and TBH it'll be a proper PITA, the cuttings you don't net will grow any and every where.
Also, for now if you get straggly bits trim them to the level of the main plant mass. That'll encourage lateral growth.
You must log in or register to reply here.