Good luck with the recovery

saintly said:
the most important things in my life.
my boy, my wife and my aquariums
Click to expand...

In that order???? hahaha just kidding

cheers, you and a couple of others may love em', but even some of the hardcore saintly posters stay quiet now. time for me to hibernate a little. re invent my posting ways.

he he, well I never say much on your threads Mark, but I love reading them and I particularly like looking at the pictures

a1Matt said:
...well I never say much on your threads Mark, but I love reading them and I particularly like looking at the pictures
Click to expand...

saintly said:
time for me to hibernate a little. re invent my posting ways.
Click to expand...

Just stop the garble and post the pics, they speak a thousand words!

I'd love to have more to say about your posts Mark, but i'm sure there is only so many times you can read "mate your tank looks absolutely stunning... as usual"

I've been for my weekly trim. just to take care of e tenellus runners. I've also shaped the riccia stones, and mown the hairgrass that goes up the path.

the rotala is on course for some the best I've ever grown (colour wise) I've got a photo shoot coming up in the next 3 weeks or so and I've got a to make sure the stems look good for that time. so, the plan is to trim them next week, (they should be at the top then) which gives the stems just under 2 weeks to develop new crowns. i really have fingers crossed otherwise the tank is going to look average in the image.

so the first image is sideways on.... 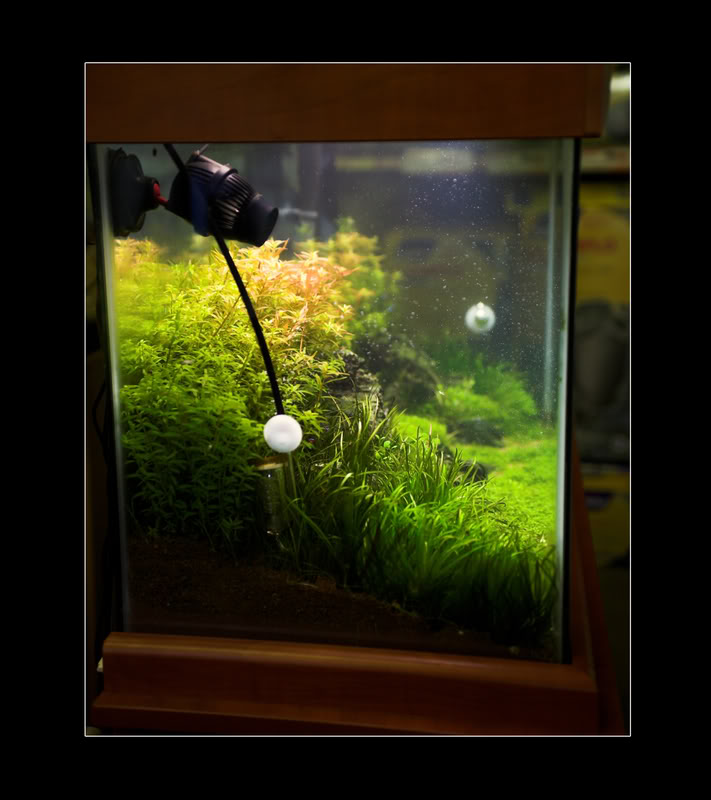 the second was to access what a flash head would do for the final shoot. it's convinced me to hire 2 x flash heads for this tank....i always say this and never get around to photographing my tanks properly :?

you can just see my hand holding the flash 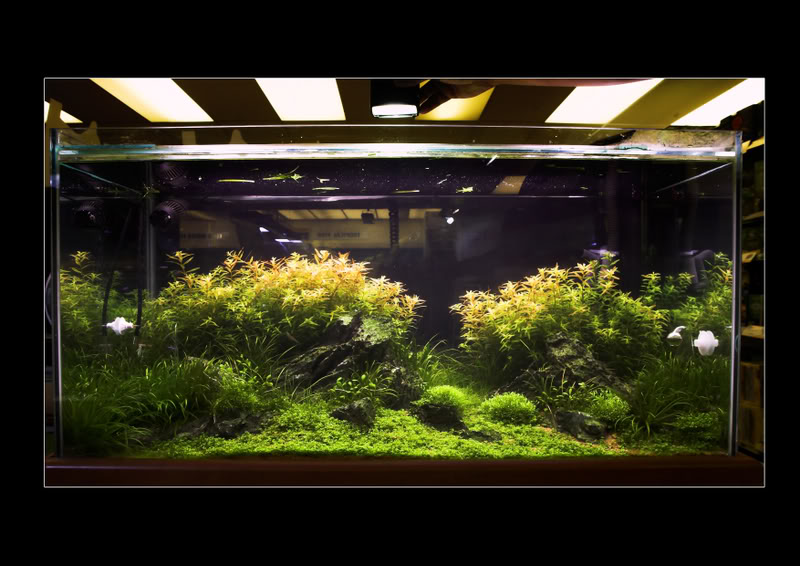 i'm aware of the reflections, but come shoot day it will be total blackout....promise.

so there you have it. half way through the tanks life.

Hi Mark,its turning into a lovely layout,cant find any fault with it as far as i can see,
regards john.
www.johnstarkeyphotography.co.uk

If I had to pick one minor area for improvement it would be that the two central 'pillows' of Riccia do nothing for the whole layout - from my perspective, anyway.

They are a minor distraction that look a little too artifice in relation to the natural-looking blending and textures of the remaining composition.

Take this critique as a compliment, if you can. It is very easy to see such a minor distraction in such a well-aquascaped tank!

I'm looking forward to seeing this in the flesh soon!

George Farmer said:
I suspect you already know this and intend pruning them back prior to a final shoot...?
Click to expand...

ones is distracting. in fact i placed them unevenly from the start .

i just left them. guess i gota move em now

in a way it's good we have an AGA judge to put forward valid points of critique.

my inexperience shows through at times. still valuable lessons being learnt all the time


john starkey said:
Hi Mark,its turning into a lovely layout,cant find any fault with it as far as i can see,
regards john.
Click to expand...

All good mate. I've added some comments to my last post...

i see matey, i'm chuckling to myself

your absalutley bang on, when it comes to riccia stones i just place them randomly without even thinking what there going to do in the future.

your comments are always welcome. trust me.
G

Great stuff Mark
The HC has filled out so much in a couple of weeks, looks fantastic now!

gratts said:
The HC has filled out so much in a couple of weeks, looks fantastic now!
Click to expand...

thanks paul. it's certainly changed since you last saw it.

polishing pads has just transformed the water clarity over night!

for some reason, theres been loose particles floating about for some time adding to the slight haze. we put 2 polishing pads in yesterday and hey presto...crystal clear water

i think because of the old AS being mushy, the flow has been picking up the real fine particles and they've just been circulating with settling, what ever the cause, it's over now.

it's amazing the difference in the overall look of the tank.

Are they the JBL Symec Micro? You cut it to size and fit them in your filter. I have some but haven't used them yet.

Sounds like they're a good idea to use prior to a photo shoot... I'm doing my 120cm soon.

One thing I did hear from a JBL rep, they do clog quickly so need changing/removing soon after to maintain decent circulation.

George Farmer said:
Are they the JBL Symec Micro?
Click to expand...

no mate, just the fluval ones. i've never had this problem before and it was doing my head in, but it's certainly worked.


George Farmer said:
Sounds like they're a good idea to use prior to a photo shoot... I'm doing my 120cm soon.
Click to expand...

yeah, everyones chomping at the bit to see that....rightly so, it is a great scape...

saintly said:
no mate, just the fluval ones. i've never had this problem before and it was doing my head in, but it's certainly worked.
Click to expand...

Good stuff. Will they be replaced frequently, or just removed when appropriate?


saintly said:
yeah, everyones chomping at the bit to see that....rightly so, it is a great scape...
Click to expand...

Thanks mate. Trouble is - the higher the expectation, the bigger the potential disappointment... I'll be happy with a ranking higher than 898th in the 2009 IAPLC!! PFK readers will get a sneak preview in the April issue, if they're really interested in seeing it...

Anyway, enough plugging of my stuff.

Keep up the good work, Mark.

I'm not sure if you've talked about this, but how long will this be running for in the shop?

Will you be doing the re-scape?

George Farmer said:
Good stuff. Will they be replaced frequently, or just removed when appropriate?
Click to expand...

when needed. matt will change it on Thursday (w/c day) for new ones.


George Farmer said:
'll be happy with a ranking higher than 898th
Click to expand...

oddly enough i was looking through IAPLC book from 2006, and top be quit honest (controversial now) i cannot for the life of me get my head around the judging. there are obviously scapes that should place higher than they are....such as your from last year. it almost makes me not want to enter.


George Farmer said:
I'm not sure if you've talked about this, but how long will this be running for in the shop?
Click to expand...

good question, the way i see it is, the tanks current form is governed by the stems. as long as i can keep trimming and they respond well to being trimmed, i'm ok, but amano does say (cant remember where i read it) stems will only take so much trimming before they give up.

it's the height too, from this image ideally they don't want to be much taller for the best look, but once I've got my "final" image, i can carry on and make them into a proper 2:1 ratio almost, reaching the surface
would be great ti improve my trimming skills 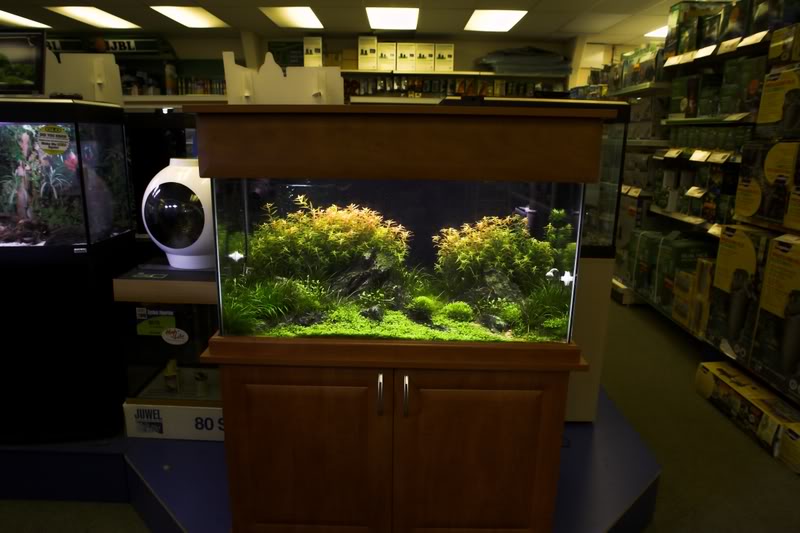 i think theres a good 3 months left?....but for it to be at it's best?....2 months. these are only rough calculations though. limiting the light will prolong the scape further still, but it's only on 6 and a half hours as it is.


George Farmer said:
Will you be doing the re-scape?
Click to expand...

of this tank?...I'd like to do something else in it, high maintenance again but what i don't know.

there's a few people now asking if I'd do scapes at home, but my plates becoming full as it is :? business' , offices etc...yes! home tanks?...not sure

I would say a lot people are immediate gratification seekers and see your display tank, thinking, "I want that". But most are not prepared for the cost outlay and maintenance required.

Also if they can afford the gear and your services, then they'd more likely go for a reef. Reef are far more popular than planted, and probably always will be, due to the high impact nature of the livestock. I still need to set up a reef...

Re. the IAPLC I think the scoring system may explain the 'odd' rank structure, to some degree. If there's over 1000 entries, maths tells us that just one point may make the difference of a few hundred ranks. I've learnt some valuable lessons from my previous entries so am hopeful for this year.