Are they the JBL Symec Micro? You cut it to size and fit them in your filter. I have some but haven't used them yet.
...

One thing I did hear from a JBL rep, they do clog quickly so need changing/removing soon after to maintain decent circulation.
Click to expand...

I've used that product - the instructions say to only leave them in 24 hours - they are very fine. Can't comment on the effectiveness - the pad came out pea green so I then knew the cloudiness was algae - but at least I then knew to switch to UV.

George Farmer said:
Re. the IAPLC I think the scoring system may explain the 'odd' rank structure, to some degree. If there's over 1000 entries, maths tells us that just one point may make the difference of a few hundred ranks. I've learnt some valuable lessons from my previous entries so am hopeful for this year.
Click to expand...

I too was baffled by your poor showing last year - really didn't seem right. Where is the scoring system explained - its always seemed quite mysterious (unless perhaps one can read Japansese Aqua Journals?)
---
Ray
Always learning ... [Active] 10l nano DSM See my 200L 90cm tank journal... See the rescape of that 90cm 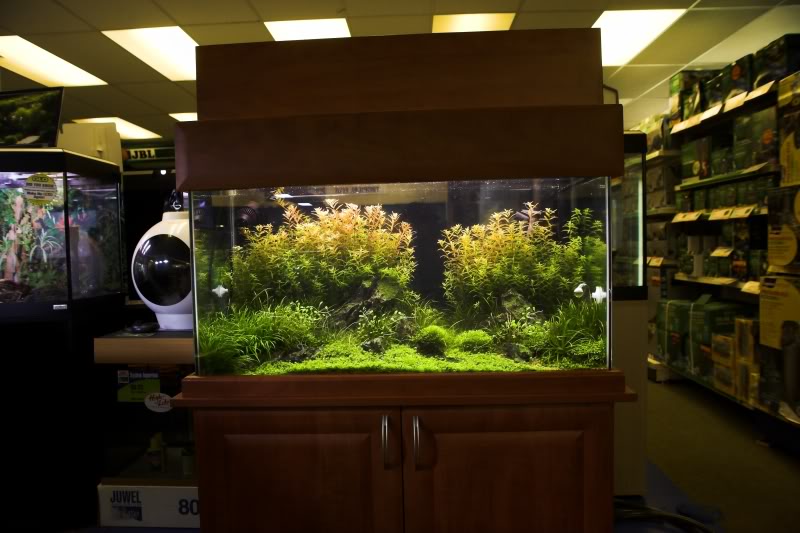 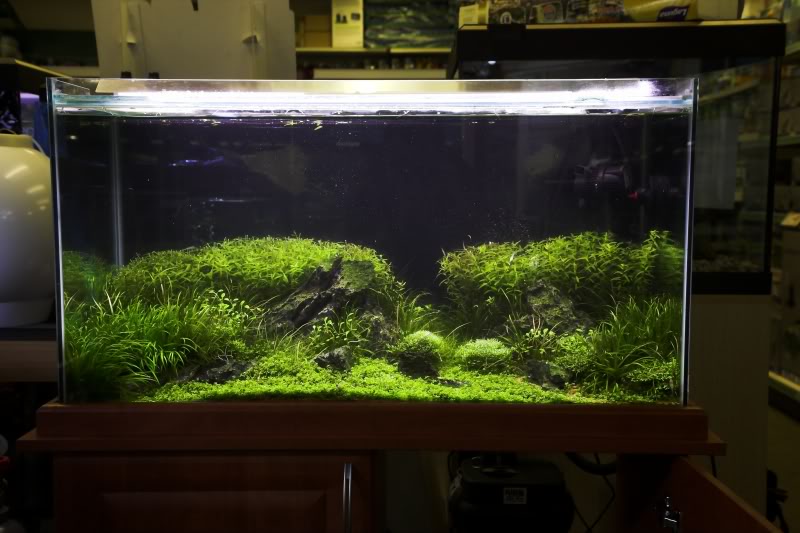 I've also had to cut back on the lighting due to a build up of the green stuff on the stone, plus feeding of fish attributed to it i reckon. i boosted the lighting by a big margin too soon....

sorry george, the riccia stone is still there

It looks so dense and compact after the trim

SteveUK said:
It looks so dense and compact after the trim
Click to expand...

unbelievably so steve. this is only the second trim, so i have high hopes for a really compact bush.


SteveUK said:
How often are you trimming the stems at the moment mark?
Click to expand...


SteveUK said:
What would your advice be when starting a new tank, plant thick and dense?
Click to expand...

/me is loving your bush(es)

What did you do with the lighting in the end? Stick with the two tubes or up it to more?

water parameters, i haven't a clue.

saintly said:
I've also had to cut back on the lighting due to a build up of the green stuff on the stone, plus feeding of fish attributed to it i reckon. i boosted the lighting by a big margin too soon....
Click to expand...

This tank is a cracker

Re. 'green stuff' sounds like you want some nerites in there. Be a nice selling point for the shop too.
Before you go - here's something I'd like to share... 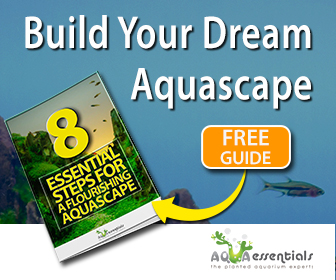 Aqua Essentials said:
This tank is a cracker

Re. 'green stuff' sounds like you want some nerites in there. Be a nice selling point for the shop too.
Click to expand...

thanks richard, an unusual visit my friend, but pleasurable all the same.

yes, actually what snails that are in there certainly munch there way through the stuff that appears on the stones. i've limited the lighting too and cut right back on feed.

Nice one mate, stems should look a treat in a couple of weeks...

cardinals are shy! they just wont come out of the stems unless being fed. so today, we put in 6 harlequins to see what happens, and it was a success. the harlequins didn't hide.actually the cardinals came out to play, but soon vanished when someone walked past the tank.

so out come the cardinals and in go the harlequins.
J

i'm hoping so, they do look class actually as they swim in the top half just above the stem line, so photographing should be fun and easier .

cor, it's difficult to know which journal to post on

anyway, I've received a call from matt confirming that the rotala is forming new crowns from where i trimmed it so all looks good for it's photo which is coming soon.

the tanks always in my mind when I'm not around it, so are the worries that go with a planted tank.

what a difference a day makes....and upping my trace dosing!

i suspected there was a short fall in a nutrient judging by my HC. now it wasn't bad but you just know something was missing. i upped my co2 and doubled trace dosing, and bingo, the tank's looking vibrant again.

just hope everything falls into place before next weeks photo! 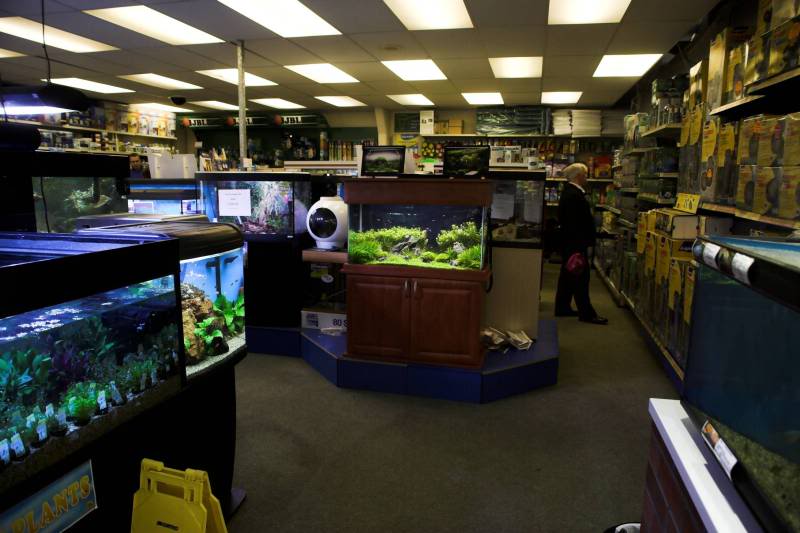 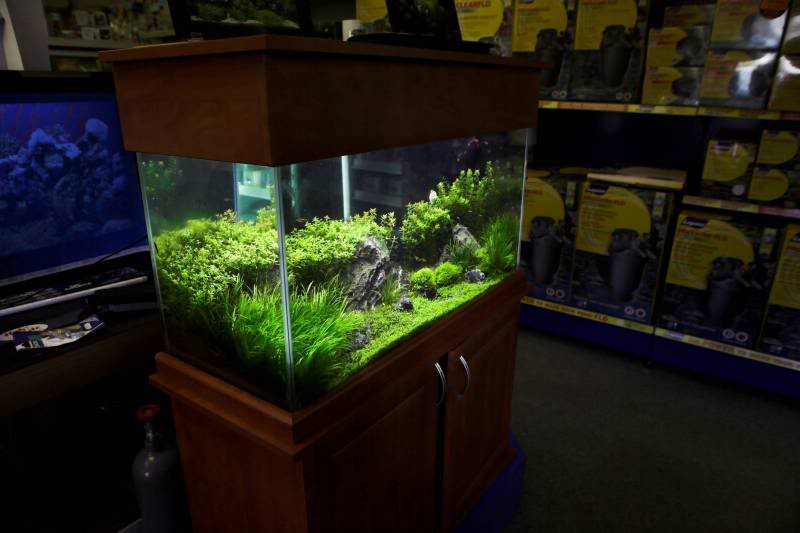 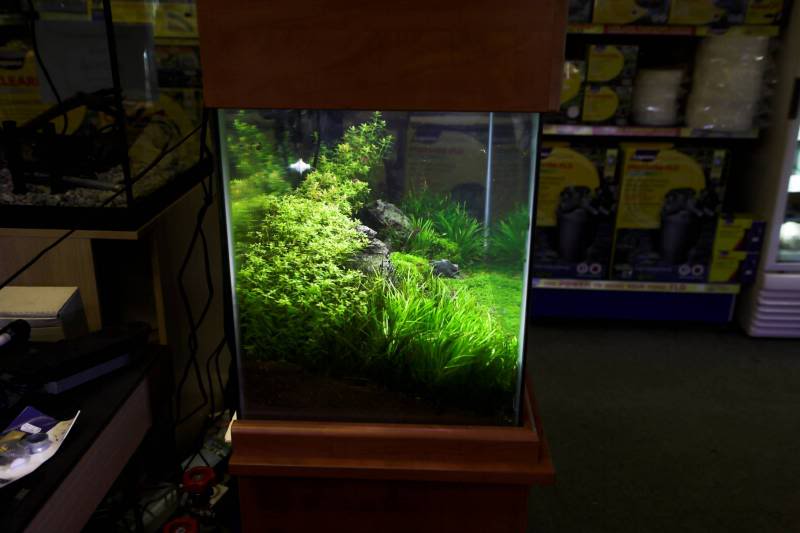 another 10 shrimp went in today, so there must be 30 or 40 in there now and they've cleaned the stone a treat! rotala is making a comeback after it's trim. i also gave HC,tenellus and acicualris a haircut too.
A

Looks superb, Mark. Getting better every time we see it, as it should.

Interesting on the CO2 and trace dosing. What trace are you using?

I look forward to seeing it for real next week. Coffee, white, one please mate.

George Farmer said:
Interesting on the CO2 and trace dosing. What trace are you using?
Click to expand...

yeah, it's been a bit weird.

initially the HC went mental in terms of growth,then slowed down. over the last few weeks its looked OK, but not amazing.(not like I've had it in the past) but being the avid follower of CEG, i go by his rule of thumb, if plants are not doing well usually its a CO2 problem. so, i pushed the co2. i only presume kno3 and po4 are ok, but trace, I'm always unsure if plants are getting enough especially low growing HC in a tall tank :?

i've also angled the power head downwards so ferts and co2 can be more evenly distributed. with the algae on the stones a couple of weeks ago also gave me an inclination that something was wrong. (i panic at any sign of algae) so from that point i added more trace and co2....1 week on those stones are almost clean again.

anyway, i gave instruction to double dose trace and the HC has brightened up, a trim helped too i think.

the one other thing that contributed to the whole thing must be the mass of stems that were soaking up the nutrients, then i take those out and there's more ferts to go around.

one of the downsides of having just 1 day to make all of these decisions, then leave it for a week.

the trace's are from AE

saintly said:
one of the downsides of having just 1 day to make all of these decisions, then leave it for a week.
Click to expand...

Well, hats off to you, as clearly you're making good calls.

I guess in time the staff will be able to make these decisions independently - which will be rewarding for you, I'm sure. I'm assuming you're explaining everything to them, then hopefully some of that knowledge and experience is passed on to the customers, in your absence.