The Lonely mountain -Final photo before taking it down

it has been awhile since I have started this project, but as I have been away for more than a month and I have been quite busy lately, I didn't have time for it.
The long story short: As I really liked the hardscape I have used in Aquatics Live, I wanted to create a long..or lets say longer term scape with it, where to play a bit more with plants and arrangements.

So at the beginning of December I have decided to give it a go. As I was planning a long Christmas holiday, I decided to go the DSM way.

I have used some Tesco cat litter for substrate - really love the color blending of the stones and the cat litter. Under the cat litter I used some fertilizer to provide nutrients for the plants, during the "dry season"

The tank has been left on its own, with no heating and occasional spraying for around 2 and a half months. The plants used are Tropica's: HC, 1-2 Grow Eleocharis mini, Hottonia palustris, Riccardia Chamedryfolia. Fisidens fontanus and some Althernatera for a splash of red.

The outcome after such a prolong absence and negligence..... Well the plants were fine, but didn't really spread a lot, since the planting. I suppose this is because of the low nutrient load of the substrate, low temperature during my absence and not enough light. I left the timer set on 8 hours per day, when I left, but the main electric switch has defected, so it has been dark for some time...
On my arrival, I have increased the lighting period to 12 hours. 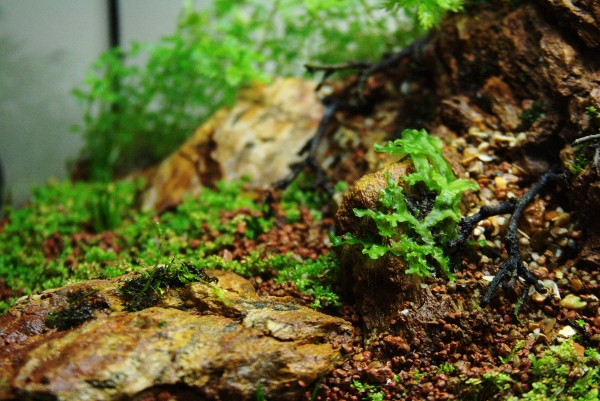 It is huge, compared to its underwater form. You can see it compared the other plants here: 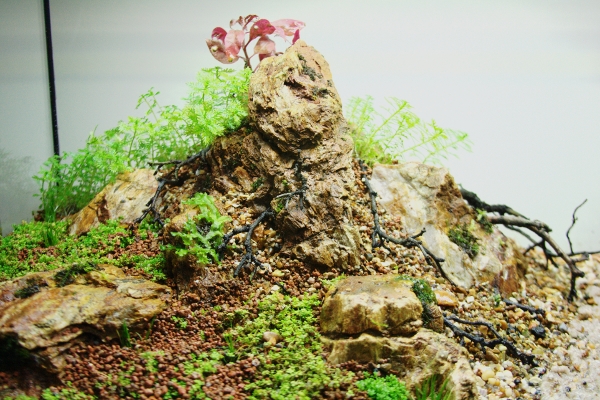 The Fissidens is not doing very well, but has some new green shootings, so I hope it will be ok, after the flooding. 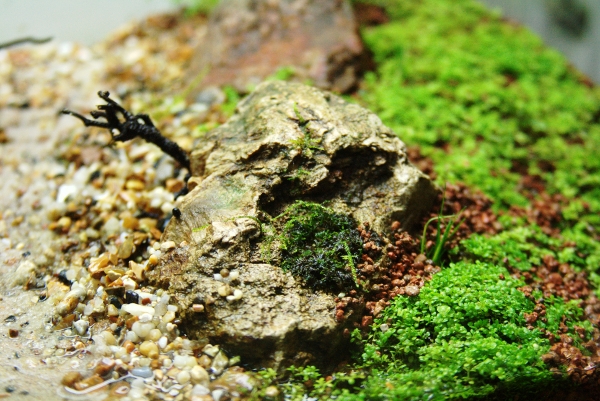 Shortly will post a picture of the tank after the flood. It has been 3 days now, since the big flood.

Looks excellent antoni! Is that the actual hardscape from aquatics live? You've done a real good job replicating it!

Just one more thing...more pictures.
life is like a pot of HC

Looks great Antoni my fave scape at AL, only let down for me was the piece of wood on top of the largest rock which I see you removed here love it

I really do love the rock!

Do you want more pics of the scape or antoni ?

I liked version one alot but version two is def looking even better.

Sent from my GT-I9100 using Tapatalk 2
MY FIRST JOURNAL

Hahahaha! You have to admit, dave, he's a good looking bloke! He's like the Gary Barlow of ukaps!
life is like a pot of HC


Yes, Ian, that is the hardscape from Aquatics live, I took it back home....about 30 kg of stones in the suitcase


LondonDragon said:
Looks great Antoni my fave scape at AL, only let down for me was the piece of wood on top of the largest rock which I see you removed here love it


Thanks mate! Yes I must agree that it looks better this way, but I will try the bonsai style scape soon again, with different hardscape.

jack-rythm said:
I really do love the rock!
Click to expand...


Thanks! Those stones are absolutely stunning. Actually I thing it is petrified wood... from Unipac.

somethingfishy said:
I liked version one alot but version two is def looking even better.
Click to expand...


Thanks mate. I felt that this hardscape has some potential, so I decided to give it a try again.

Last few days, have been hectic, I have run out of CO2 and I didn't have time to go and buy one and have left the tank with no CO2 for more than 24 hours. Got a full bottle now already connected and hope that there will be no major issues.... At rate of 4bps the there must have been quite a swing in the amount of CO2 in the tank.... To battle this effect, I have started adding liquid carbon and will keep adding it for few days.

Today I will make a large water change /about 75% /, which will be the 4-th for the first week. My plan is to reduce the water changes to 2 per week from Monday and to change only 50%

Here is a picture of the scape 3 days after the flood. Sorry for the equipment inside!

Just one minor thing...the red lud in the back, is it staying there or are you going to go for more smaller leaved stems?
life is like a pot of HC

you are right, the leaves of this one are quite large... it supposed to stay a bit more compact, but.... maybe this is because it is in emmersed form still. I will wait to see if it is going to transform. If not I will change it with althernatera mini. I have some 1-2 Grow

Is it the new ludwegia sp1?
life is like a pot of HC

Thanks Jack! Yes I hope now things will get better and the tank will evolve nicely. Already have few things in mind, that can be improved, but will give it some time first

not much has happened in the last week or so.

The HC is struggling to make it and I have an algae taking advantage of the damaged and struggling plants. 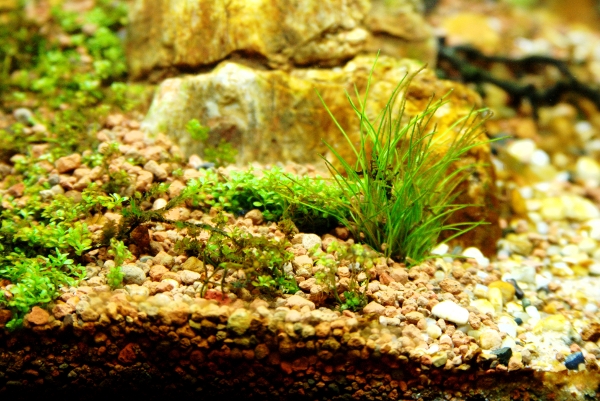 On this pic you can see the dying plants. I suppose this is kind of normal for some of the plants, during the transition period from emmersed to submersed form... even though I have been pumping a lot of CO2 in - for the first 10 days at rate of 4 bps, currently at 2 bps.

I'm not quite worried about the algae, as with the help of some liquid carbo, I think I will sort them out, but might need to replant some of the HC...

The hottonia is trying to take over the tank and will need a trim soon. 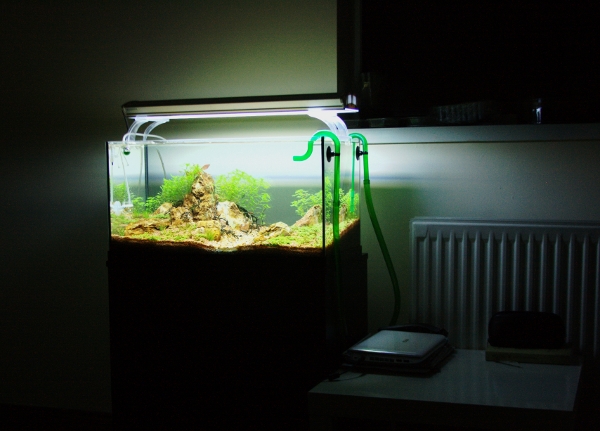 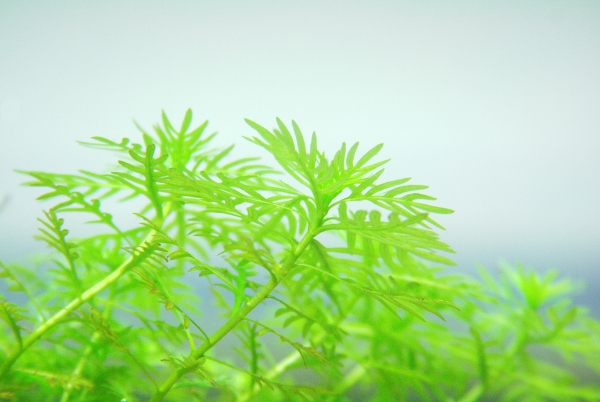 Even though it is such a beautiful plant, I'm not quite sure it will be the plant of a choice for the background... 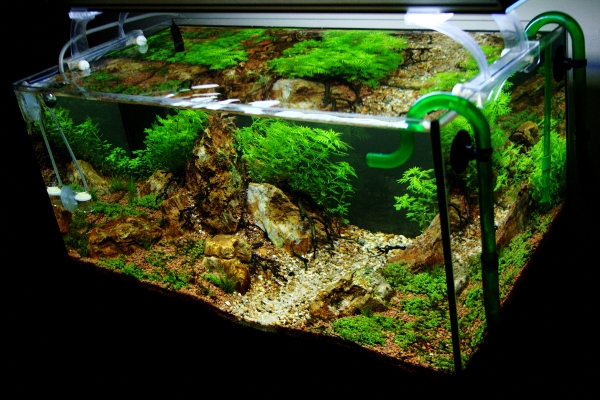 Couple of close up shots of the hardscape: 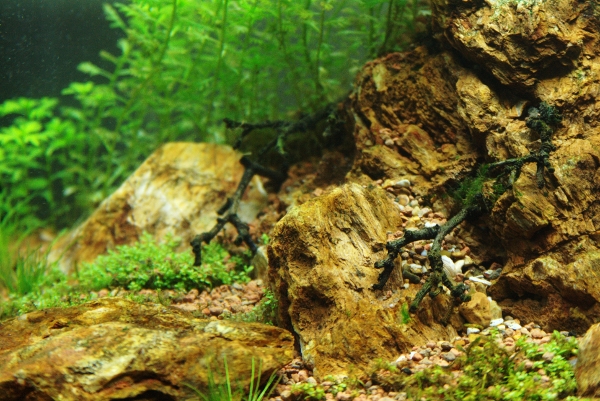 Hope the HC will recover and will make a nice dense carpet here...

One of my selection RCS on a rock face! 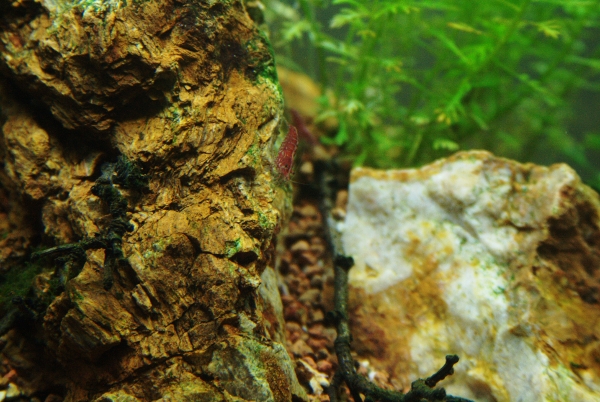 I will appreciate some advice regarding the fish choice

I was wondering among the following species:

Sundadanio Axelrody http://www.seriouslyfish.com/species/sundadanio-axelrodi/ The Sundadanio was my first choice, I can get from my local shop the blue/red form, but after seeing the Norman Lampeyes I'm now lost

Boraras Brigittae Boraras brigittae – Mosquito Rasbora — Seriously Fish I love the Boraras Brigittae it is lovely little fish, quite bright red, when fully grown. My only concern is that it will get blended with the rocks...

Nanostomus Espei Nannostomus espei – Barred Pencilfish (Poeciliobrycon espei ) — Seriously Fish that is fish I have seen in the Amano's tank. It is not very colorful but striking

Nice scape antoni, if its any help the lampeyes will jump and if the pencils are of the same nature as beckfordi they will probably take a dive out of the tank as well, I'm keeping boraras species in an open top and as of yet no jumpers
About time 90x45x45
MiniMal / few scapes in one place
Low tech

The s. alxelrodi would look ace in this scape.
Can you manage to get hold of all these fish?
life is like a pot of HC
You must log in or register to reply here.