Sent from my Panasonic P11

Got me curious about this one, subscribed.

Sounds very interesting AND big!
Any pics yet?

Tank is now in my living room

.....or should I say the ingredients to the tank. It had to be chopped up to fit into the car after a slight miscalculation

The tank was originally built by arguably one of the best tank builders in the UK, Vince from UK rimless/aquarium connections. If you haven't heard of him, it's basically where the rich reef guys go when they've nothing better to spend their money on

Obviously it's second (3rd) hand for me to even consider dissecting it, but I got it for an absolute bargain really. For this tank new your looking at way over £1200. The owner was gutted to be having to sell, but it was just too wide for him. (doors opening, access etc)

It's braceless in the sense that there are no braces ....but because of the height, even with 15mm glass, it would cause some bowing, so has "braces" running along the front and back. You'll get the idea when you see some pics anyway.

I'm hoping to get a stand built tomorrow (Sunday) nothing special as I'll be cladding it anyway. Just something quick, tidy and strong. Looks like we're going with the gloss white look. I'm working away next week so hopefully I'll get it done ready for the tank to be re-built next weekend. Pressures on

At least I have an extra hour of head scratching time

It has a weir in the back left corner with twin 40mm overflows (so should be silent) and a 25mm return. If I had to grumble about any part of the tank then this would be it. I did want to run 2 pumps from the sump so would have been perfect with 2 returns, but beggars can't be choosers and I'm just being picky really. I can't afford any posh lights so I'll probably be building a pelmet/hood to hide the T5's anyway, so an extra return can easily just go over the top and not be seen.

I have a single 54w T5 running a random office bulb and a twin 39w T5 with Giesemann aquaflora and mid day bulbs, so hopefully this should be ok. Until it's up and running I probably won't know. Maybe I'll need more, maybe less?

Co2 will be via my inline 2kg FE setup I'm currently running. I mentioned I wanted two pumps from the sump, one would be connected to the diffuser and then through a reactor/water filter DIY job. Ferts will be EI (once my Profito has run out) This will be the first time so should be fun

Dosing pumps are probably going to be pretty high up on the list, especially working away a lot.

That's all I can think off up to now. I'll be pinching an idea from @Chris Jackson for the background. Thanks again for the idea. I like a black background personally, but then I see some scapes with a white or light background and think wow! With Chris's idea it looks black, but by adding a backlight I can change the the look whenever I want. Instead of using regular black vinyl, I'll be using window tint. Hopefully should turn out nice.

If you think Amano x sumida, that's the sort of look I'm going for. I've already bought the wood ready, which was actually more expensive than the tank

I'm thinking that because of the size it can't really be too amazing if you know what I mean. I'm struggling to get a MC carpet going in my 4ft'er so I have no hope with this really. I'll probably give it a go though Just think swords, java fern etc etc everything from my current tank will be in anyway.


Crossocheilus said:
Sounds very interesting AND big!
Any pics yet?
Click to expand...

Its in pieces at the moment but I'll get some up tomorrow of stacked glass (hopefully including a stand!

) I do have these pictures from its previous life: 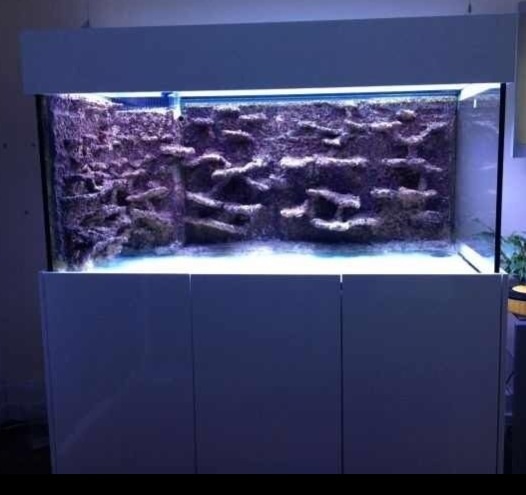 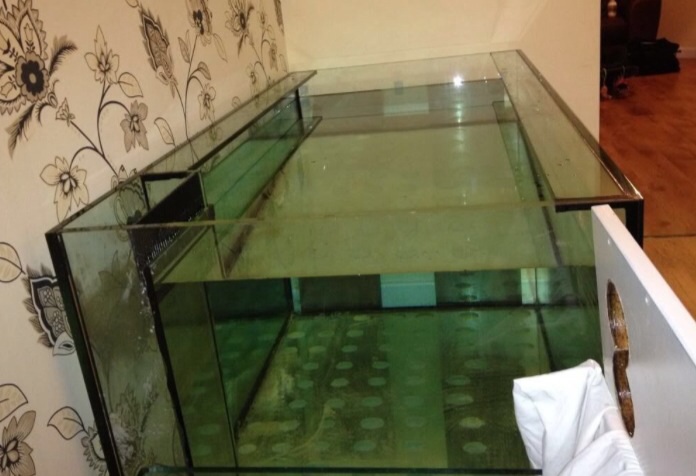 Thanks a lot for the all the comments and likes, hopefully I can live up to at least one of your expectations
The Next Episode - 800 Litres

I've spent most of the day scraping the old silicone off, I've had enough now. That means no stand has been built so that's now on hold until next weekend.

I never really thought that optiwhite was worth the extra dollars, but seeing this today made me realise that it really starts coming into play as the glass gets thicker. Optiwhite side panel vs non optiwhite bits (all 15mm):

Edit: The braces in the pic are actually 12mm so proves my point further 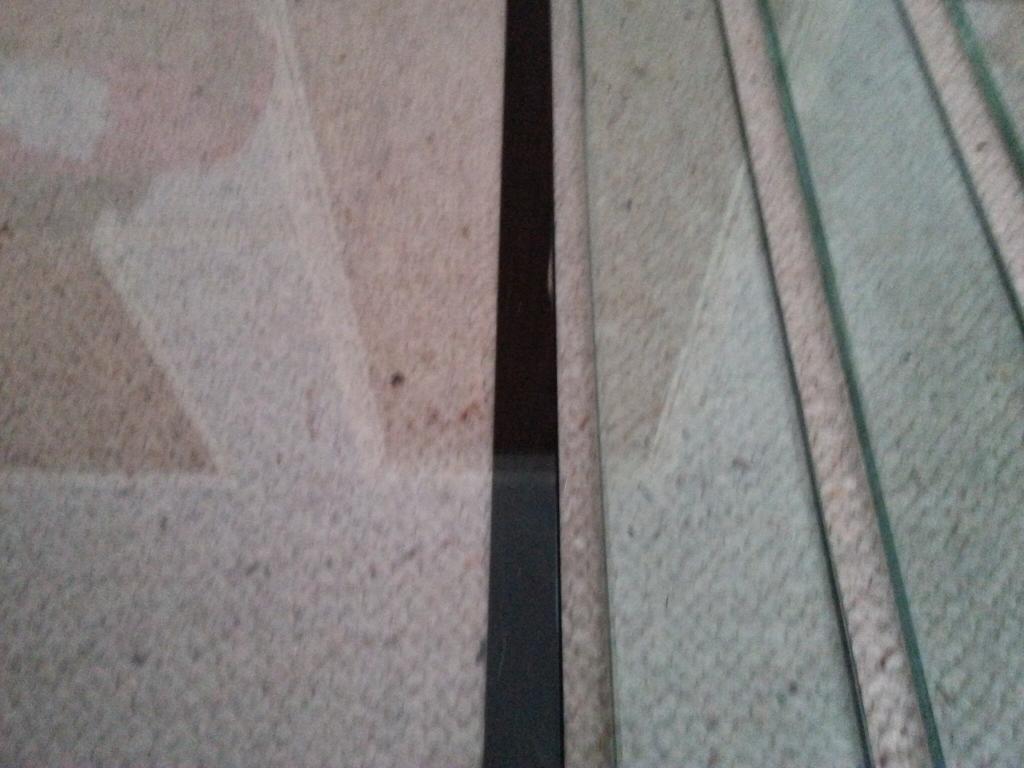 I don't mind going over the top really, because at this stage I can't afford any fancy lighting anyway, so I'll need at least a pelmet to hide the T5's.

The twin pump thing was more a case of me just having a back up, running two smaller pumps directly from the sump instead of just one bigger pump. If I ever got the chance to have a tank built from scratch I'd definitely go this route.

TBH it doesn't matter now anyway. I wanted to use the 2 pumps I have now, but they only run at 500lph because of head on my current tank. This tanks going to be slightly higher so I'm probably going to lose even more lph. Running the two I'd be looking at 1000lph absolute max with no restrictions. I do like a slow flow through my sumps, but near enough 1x is a bit too slow! I'm going to have to bring another pump in which is an extra expense I didn't want or plan for, but it has to be done.

I'll then use one of the pumps I already have to inject the Co2 via my inline then through a DIY water filter reactor and straight into the tank. With the extra restriction of the reactor and slightly higher tank, I'll probs be looking at 400lph.

Additional flow will have to be via Hydors at this point. Until I get the wood in and figure out the planting I won't know if I can hide the other pump well enough.
The Next Episode - 800 Litres

One quick (ish) cheap (ish) stand knocked up. I'll worry about making it look pretty at a later date. All I need now is a ply top and floor for the inside.

That means next weekend is tank rebuilding time 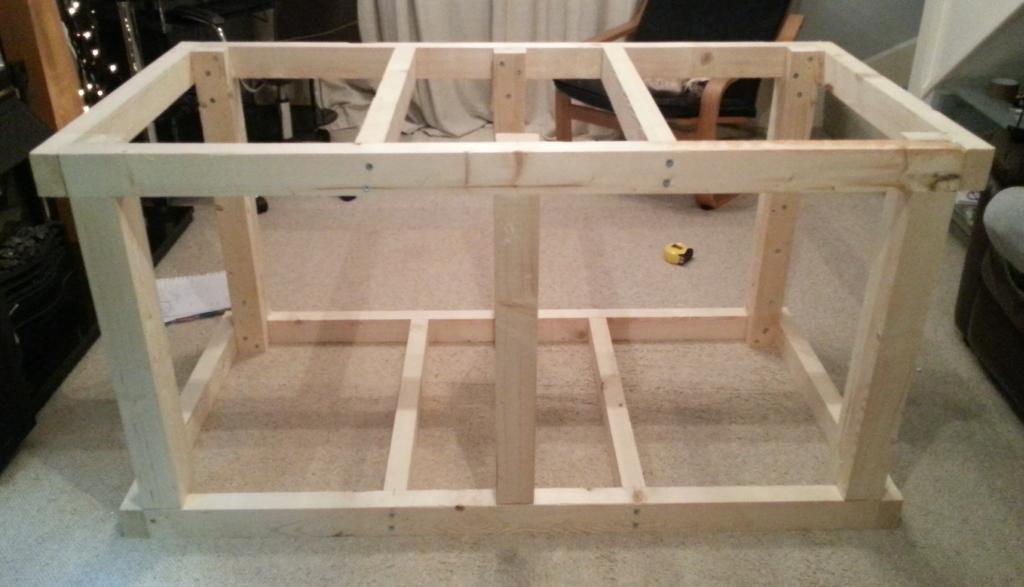 I rebuilt most of the tank last weekend and was hoping to get the rest done this weekend. I wasn't happy with the front and left hand panel join so I've taken them off and will re do them today and also add the weir and braces.

I had to chop a section out of the stand as well and rebuild it. I'd forgotten the down pipes were internal and not external like on my current setup

I ordered the new pump for the tank and went for a Jebao DC 9000. I'll probably just need a small hydor for additional flow now. 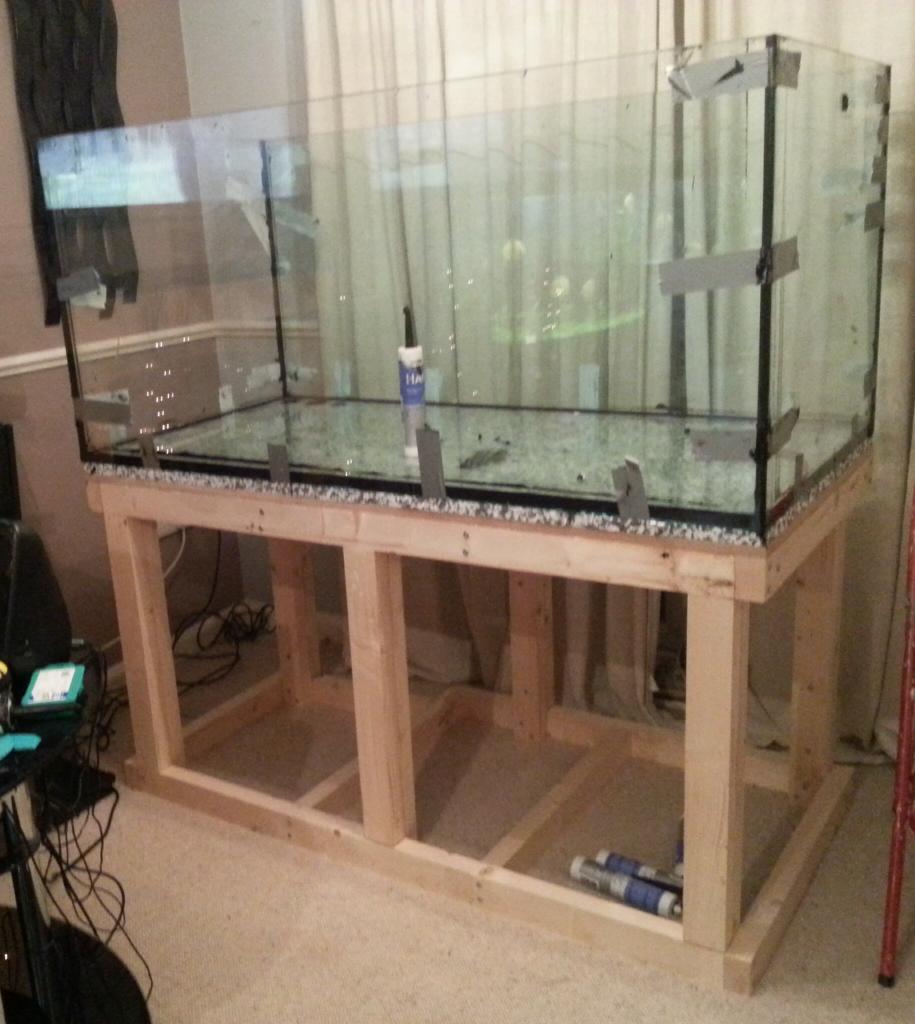 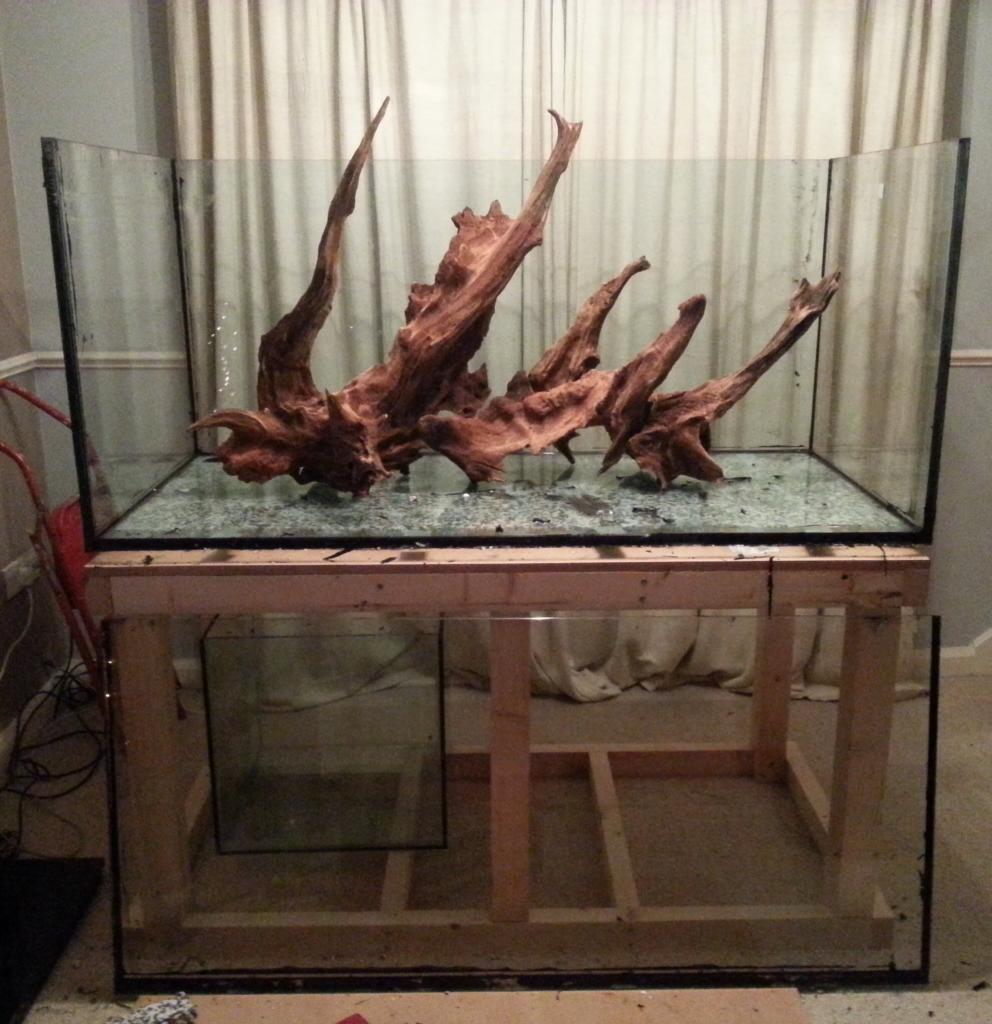 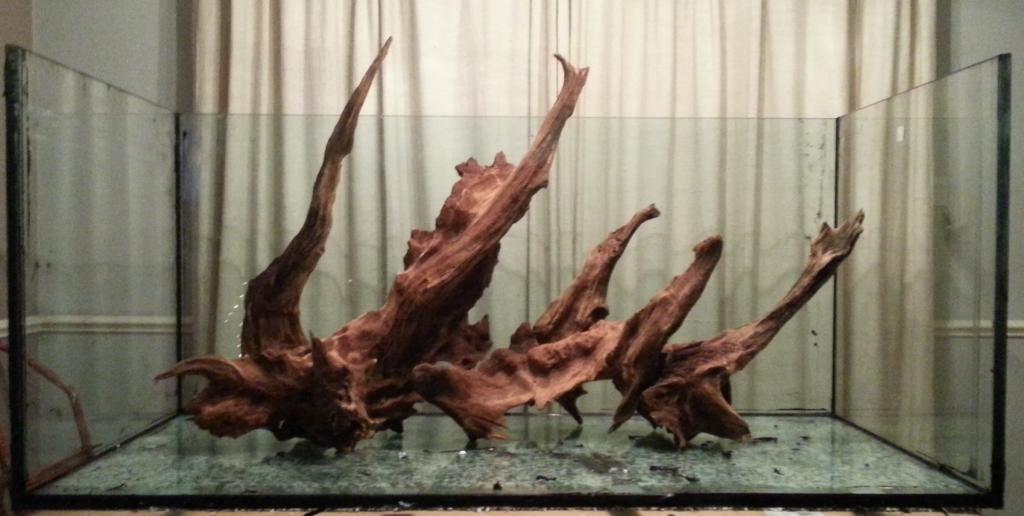 That wood is extraordinary! It will look amazing covered in ferns, buces, mosses etc. What are your plans for planting and stocking?

I have 6 pigeon blood discus, 4 angels and 2 leopard frog plecs in my current tank who will be moving into this. I have a couple of amanos somewhere too but hardly ever see them. I'm going to add another 2 leopard frogs, maybe 4 more discus and a few more angels. I saw some dantum angels a while back at my LFS which I liked the look of, would love some "real" altums but a bit too pricey. I want some blue diamond discus and my other half wants some Snow White discus, so probably 2 off each will go in. I was also thinking of adding a shoal of corys, black venezuelan I think they're called. Again though, a bit expensive when you have to start buying a shoal, I'll have to see.

I suppose the planting will be pretty simple, all based around various echinodurus. All my plants from the current tank will be going in and I keep buying the odd plant just to get them ready for this. I still need more though, the size difference is ridiculous really, what I already have won't even touch it.

I also have some java fern and moss which will be going in, but again, could do with loads more. I have an MC carpet in the current tank as well so may as well put this in and see how it goes.

Awesome dw! Could this be an Altum tank? or Angles? Their shape would go so well with the dw.

Great looking wood! Can't wait how this turns out. Definitely subscribing
You must log in or register to reply here.