Thanks for the info Mick.

I've also been looking at St Isabell's and I also saw some called "Dantums" in the LFS which looked stunning. They wouldn't have the same impact a few big Altums would make though would they.

I already have 4 angels which will be moving into this, 2 are a breeding pair and the other two are just good friends although 1 does currently have fat belly and her "thing" is extended (can't remember what it's called) I love watching them though "interacting" . I didn't or don't buy fish to breed really, or go out of my way to get them to breed, but it's obviously a sign of a happy fish when they do, which I do go out of my way to do.

I've also got the discus to think about as well, I'm not the sort of person to just offload fish just because they don't fit in with my plans, so they'll also be moving in too. Would I really have room for say 4 or 5 Altums? Probably not for now. Maybe the Dantums or St Isabell's would be a better choice at this point in time, even then only a few, 5 max probably??
Last edited: 29 Jan 2015
The Next Episode - 800 Litres

Hi, got if on full. I used to hear the hum of the aquamedic in my bedroom. I can't hear this one.
I really like the idea of LEDs. So some pics of how you set them up, wiring etc would really be useful.

My lfs has a shoal of Altums (ferrybridge aquatics). Look awesome.

Post some pics of your sump and plumbing too. Really looking forward to seeing it.
Cheers

I've never been to ferrybridge, I'll go and have a look once this snows gone!

I'll get some pics up of everything once I've got it all sorted.

Cheers.
The Next Episode - 800 Litres

Love the wood, Angelfish will be great with it.
I love my angelfish, very personable fish, and like you i have four, a pair and two good friends
Will look forward to the next stages and following its progression.
Re-education Journal.
NAtural Jurassic Journal.
Dragons Crypt Journal.
Sticks and Stones Journal.
Dusting off the old Fluval Studio 900 Journal.
Aquanano 40 CRShrimp tank Journal

Cheers @Ady34 Progress will be slow though

I've only got Sunday this week to work on the tank. Plan is to get the front and side covered in matt white vinyl and put the background on. If anyone has any colour suggestions they would be much appreciated, other wise it's looking like the usual black. Although I've had another thought White frosted window film and then black??

NC10, earlier in this thread you mentioned that you would need a bigger than 2Kg CO2. I'm going to be getting a 6kg/9L CO2 from Hobbyweld when I finally get sorted. I think it's £60 deposit and £30 refill or something like that.

I just googled Hobbyweld Sheffield and came up with SDL Minorfern.

Thanks for taking the time to do that mate, appreciated.

I've been pretty busy lately so not much action really. Got the front covered in matte white and ended up going for my usual black background. I've had a play with the rock, but no doubt I'll be altering things 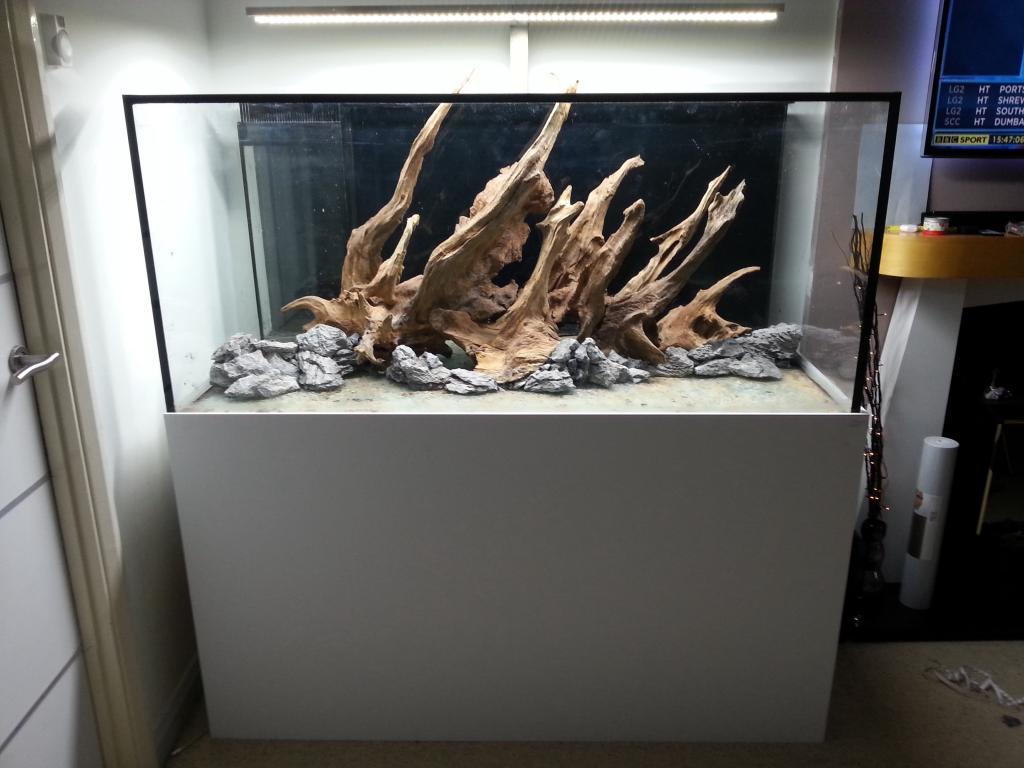 maybe you should start soaking your wood
Cheers, Lindy

ldcgroomer said:
maybe you should start soaking your wood
Click to expand...

Funny you should say that, we were only talking about it last night. Can't belive how stupid I've been, it could have been soaking all this time

My plumbings due tomorrow so there's no point filling until that's done as I'll have to move the tank. I can't see me getting any sub in this weekend so I'll get it filled back up once that's done.
The Next Episode - 800 Litres

Very beautiful design. This wood looks like dense enough not needing soaking.
whats the plan for planting?
To many to count...

Cheers mate. No the soakings not for floating, it's to get rid of the tannins.

Plan for planting is a few swords

I'm not buying anymore now though, I might find myself at Echinodorus Anonymous. This is what I have in my current tank waiting to go in:

I have some MC as well which will be going in to carpet the front. I've ditched adding the Java moss I have and still deciding on if to put any fern in.
Last edited: 4 Mar 2015
The Next Episode - 800 Litres

The plumbing has arrived. This little lot cost more than half of what I paid for the tank

Luckily the original tank connectors were still on, otherwise the plumbing would have been more expensive than the tank. Ridiculous 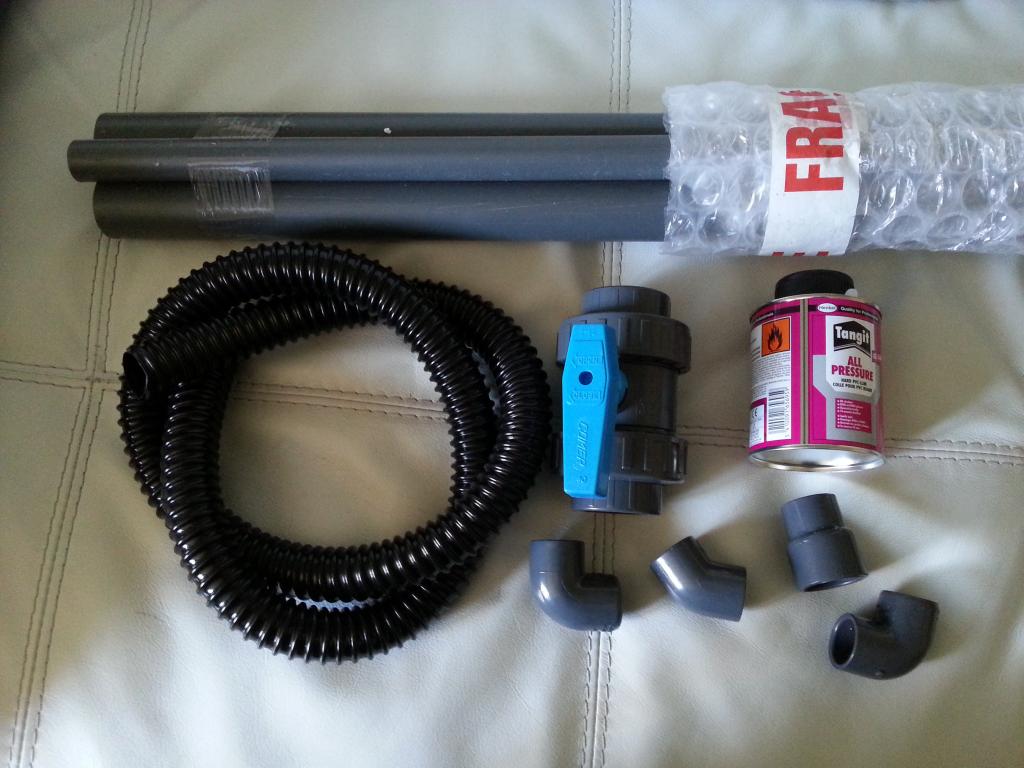 Edit: Ordered a load more plumbing. I had to re-route one of the overflows and while I was throwing all this money at cheap injection moulded plastic, I decided I may as well hard plumb the second Co2 pump. Cheap plastic plumbing parts now cost more than the tank
Last edited: 10 Mar 2015
The Next Episode - 800 Litres

I managed to get the dimmer working so lighting has been wound back until I sort the Co2 out.

3 bags of cactus compost and 6 bags of Tesco cat litter were used for the sub.

I'm redoing the single outlet to a spraybar across the back. Flows good but it's blowing a hole in the sand.

Got a few holes in the rocks I need to plug.

2 of the discus have paired up and laid eggs.

I think that's the main bits, I'll do a proper update when things have settled down a bit, the co2s in and the plants have grown a little! 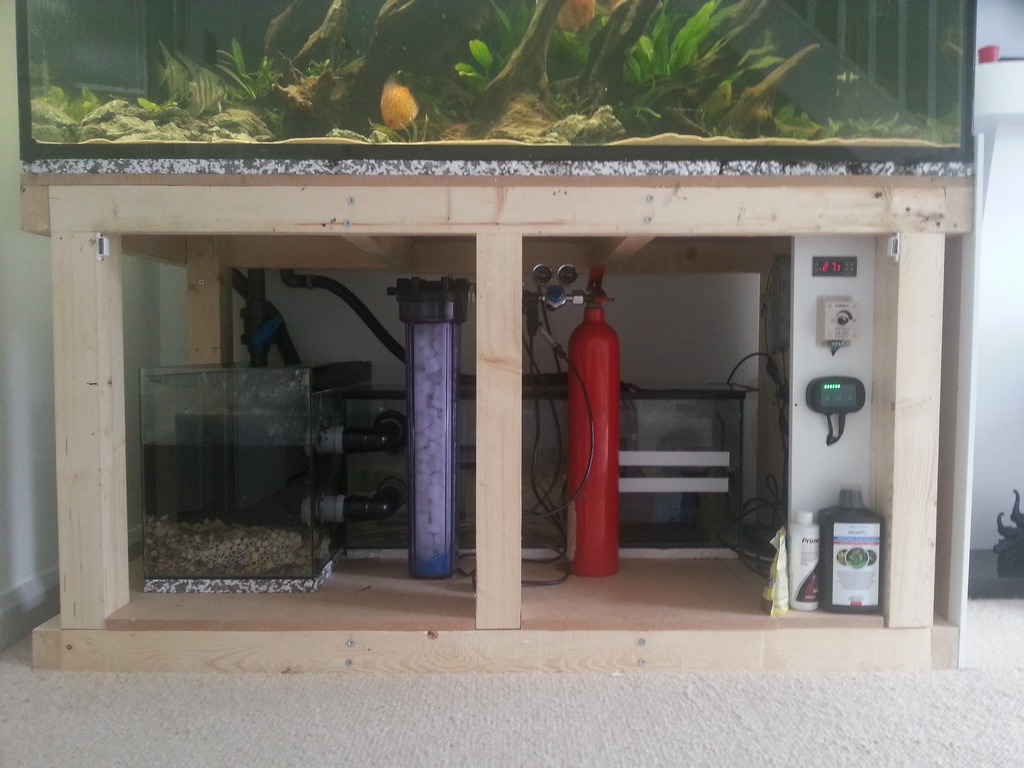 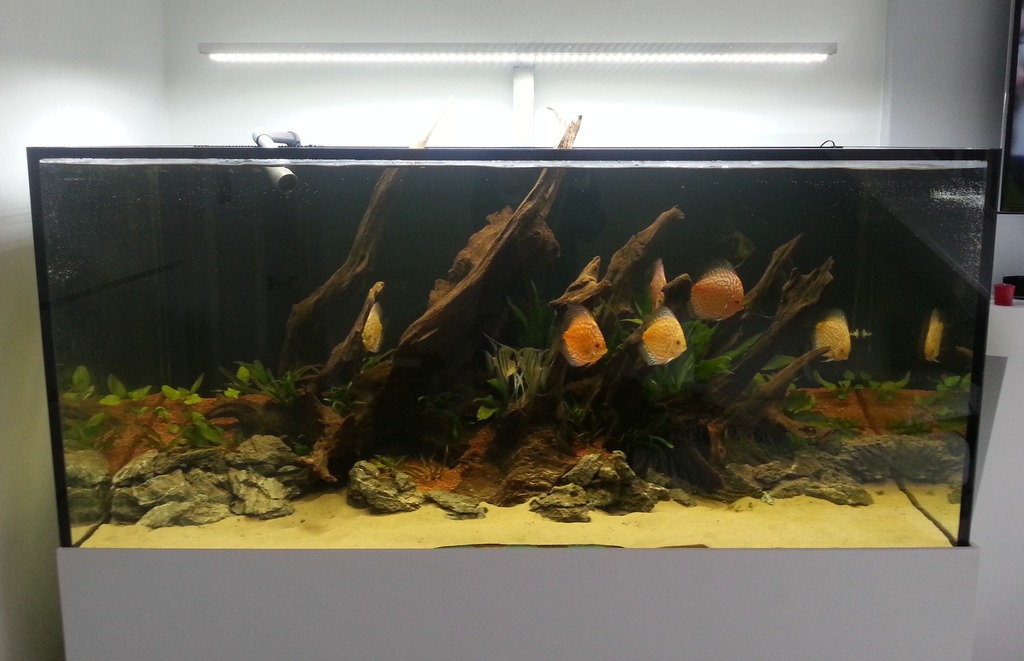 The dw turned out fantastic!

Discus look lovely. Quite subtle and not too colourful. Good job!
Most people just get one blue, one red, one yellow etc which makes it look unnatural.Not your case.
You must log in or register to reply here.