I thought I might as well turn this in to a journal, seeing as the woes with it require virtual daily posting. The hardscape was first put in way back in November 2008, long before I knew I would have the time to plant it up.

Opti white 60l tank.
Tetratec EX700 filter with glass inlet and outlet. Zeolite and Purigen were added to the filter.
Hydor 200W in line heater.
Substrate is play sand, Xingu sand and Amazonia powder.
Ferts are EI
CO2 is pressurised via a Cal Aqua in line diffuser.
Lights are 2 X 24W T5 at four hours (for the moment).

Here is the Seiryu stone hard scape with a bit of ADA hardwood that will blend in with the stems at the back. I had a clear vision of the strata like look I wanted, so I chose the rocks accordingly. With a small hammer and chisel, the rock work was done in about half an hour. I`m not one for deliberating over a hard scape for too long once it is going in to the tank. It is usually an idea that is mulled over in my sub conscious a month or two before setting up, so I usually have a clear idea. 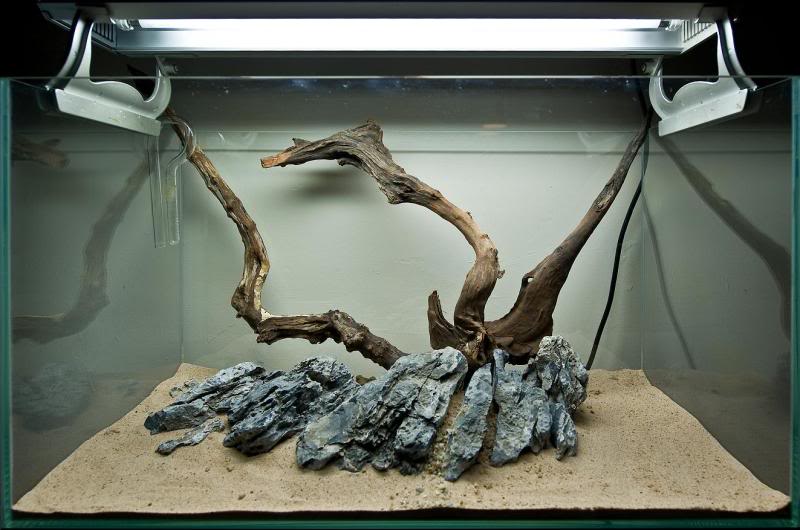 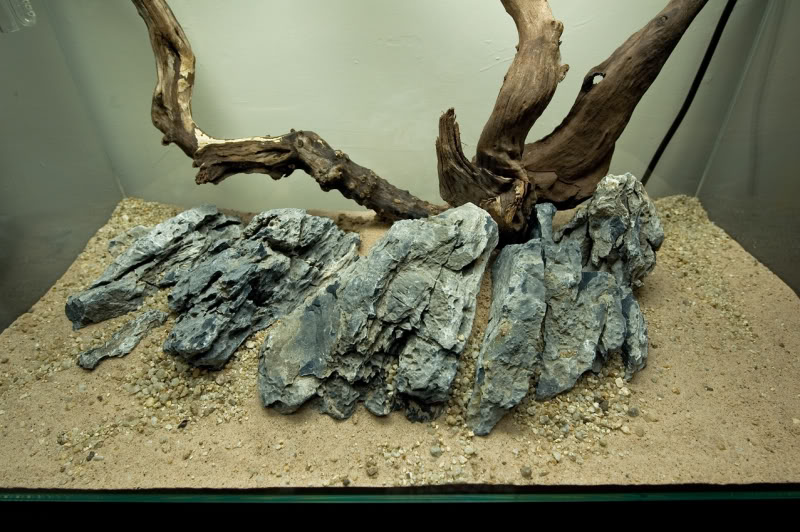 Planting was originally Didiplis diandra, HM and HC, back in Jan/Feb time. After the disaster below, I have decided not to use the DD second time round. 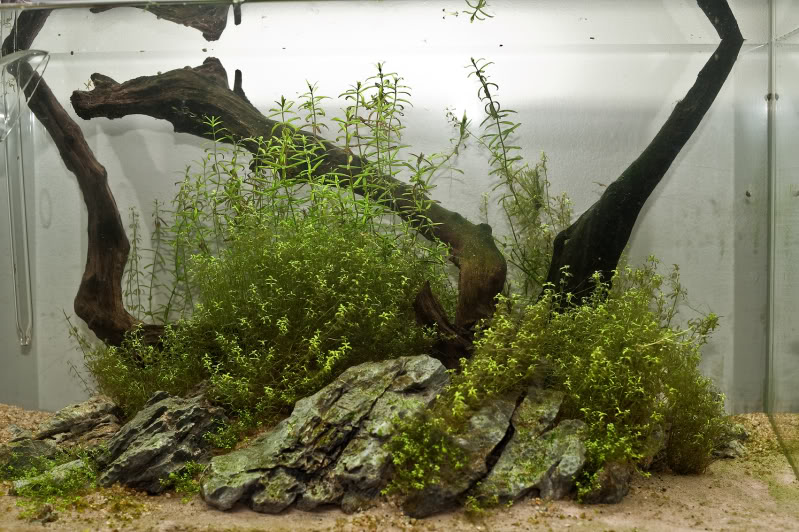 Here is the link to the original thread:

Further plant deaths after the early HM dissolving episode suggested to me that the Amazonia was tainted via its CEC, so all of that is gone now. HM stems left floating were fine, yet newly planted ones were starting to turn brown.

I have some HM cuttings from Stu Worrall, plus some HC in pots, waiting to be planted out. Plant mass is supplemented by a huge ball of L. brasiliensis floating around. This plant may well be used in my next 120cm project. I think I will make the HC a bit more prominent in the strata of the rock next time round.

I have taken out the ADA wood, as it was constantly breaking down at its surface, and depositing a mulm like mess all over the substrate. And it is that this point that this tank comes to another halt, whilst I wait for some Manzanita wood from Tom Barr.

I like this, the hardscape is brilliant. I hope you get it planted again soon!
Thomas McMillan | Lianko

Cheers, Thomas. Unfortunately, it is on hold for the duration. I may plant out the HC once it has changed its growth to immersed, as I find it a very slow starter in past experiences.

Some people can get it to take off straight away, but for me, unless I keep it potted up until the growth change, it really struggles and I get some die off. By playing the waiting game, I don`t get any die off, but it still takes a while to kick off. Then it is like a weed.

Dave Spencer said:
Some people can get it to take off straight away, but for me, unless I keep it potted up until the growth change, it really struggles and I get some die off. By playing the waiting game, I don`t get any die off, but it still takes a while to kick off. T
Click to expand...

This is what I'm finding at the moment too. Next time I think I'll do as you're suggesting and let it transform before planting

I've said it before in a previous thread, but that rock work is stunning Dave!

People like George, Zig and Saintly seem to get it growing straight from the off, whereas I seem to have to wait a month or two, even though I know all ferts are good and they are planted in Amazonia. It makes me want to drop in to their tanks whatever went in to this one.

This may get planted up before the wood arrives, and I`ll see what it looks like without, but I think the name "The Oasis" suggests it needs some trees. We`ll see one day .