It's been a month so it's about time I made an update. The shrimp seem to have settled in really nicely. When I got them there was only one red one which was one of the originals that Tina-Jane bought. In the end they all went in the big tank. I have spotted a few that have coloured up now that are still quite small although the majority are still looking like miniature Amanos. I didn't do anything to the filter inlet and only found 6 in there when I cleaned it out so not too bad.

I actually went out and bought fish last Friday which are starting to settle in now. They still freak when the light comes on and goes off but not as bad now and they are coming out and swimming around now, which is always a good thing.

They have voracious appetites. 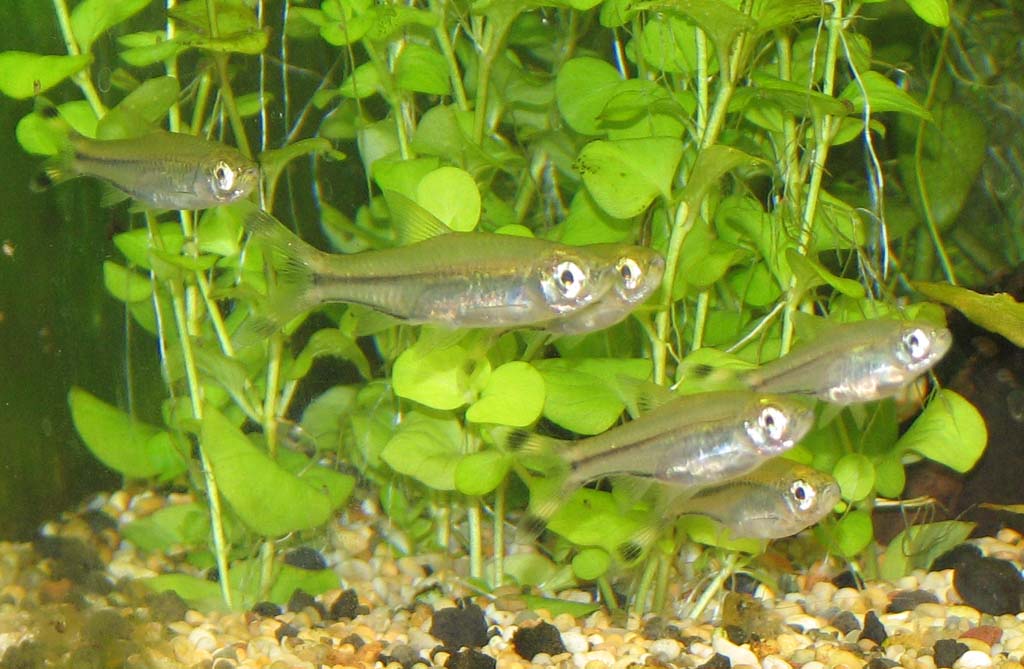 They are nice and little right now, biggest is only about 40mm, but they will get to 80mm or thereabouts eventually. The one Oto I have left is doing great. I just wish the other had survived.

I think I identified those suttings I posted about. Pretty sure they are Ludwigia Brevipes now. Nice plant as it turns out. Really narrow stems and leaves but it's turned a really nice shade of red where it gets good light. bit of a slow grower as yet.

Couple of tank shots now to show how it's filled in.

I had to take the Blyxa out in the end. It just didn't want to grow. I think it was because I didn't start COâ‚‚ when I first got it maybe. It was still alive but adn't done anything positive in a month so I binned it and finally planted the Creeping Jenny that had been floating in the pot since I got it .
I do still want to get rid of more Crypts from that forest of wendtii green and I may get rid of the wood behind it also in time as you can't even see most of it and it's just taking up floor space.
I have some cutting and replanting to do tomorrow with the Ludwigia Palustra green. It started out a bit weedy but has thickened up enough now on top to cut it and replant. The upper stems are twice as thick as below and there are some nice side shoots starting to come also.
The only thing that haven't taken off yet are the Echinodorus that a1matt sent me. They are putting on new leaves but I thought they'd grow a bit faster. I think they've had plenty of time to settle. Maybe I'll try adding more phosphate like matt mentioned. Any other ideas?
________________________
My old tank
48"x15"x18"
A

First off, the tank is looking nice (plants and fish wise)

What species swords was it I sent you again? I remember one was a marbled queen plantlet, but I've forgotten what the other one was...

anyways, I found extra phosphate (and also calcium since stopping water changes) have made a big difference in my tank. I dose nitratehosphate at a ration of 2:1 any less and I get spot algae on swords and their growth slows down.

If the CO2 is low they tell you straight away in that new leaves will be transparent\glassy and\or crinkled a little bit.

To give an idea of growth, when happy (the plant that is, not me

) I expected one new leaf every week with 1.5wpg and good CO2.

Now I have 1wpg and no CO2 I get one new leaf every 10 days or so, which comes out crinkled and then straightens up over a couple of weeks, and the final height is less)

hey TLH... If you search google UK for "Ludwigia Palustra green" your tank journal (on pFK, not UKAPS

) comes up as first results. Nice one!
A

I think the other is just a bog standard normal cordifolius. I have that one near my intake and it is growing better although the new leaves come without much colour at first. The marbled queen has new leaves but the whole thing is staying quite compact, no long stems. It did get shadowed by the Hygro but I've ripped that out today and sent it to Aaron so there is much more light now. I have some Kent phos+ so I'll start adding a jot of that ontop of EI and see what happens. COâ‚‚ is fine I think. I only put the checker back in today though so I need to check to make sure later.
________________________
My old tank
48"x15"x18"

recieved the plants today, i didnt relaise there was that much! I didnt even use half of it lol.
Thanks.
Aaron North
My Flickr Account | Equipment needed for setting up an FE | Algae & Nutrients

Well I said chuck what you didn't use. It cost the same to send as less and it would have only gone in the bin here anyways. I still have more than I'll know what to do with shortly.

A quick pic of my shrimp. I got these for nowt from a nice lady off PFK was was creeped out by them. There are a couple of redder ones than in this pic but I'm not sure these are Cherry shrimp. Anyone know for sure what they are? 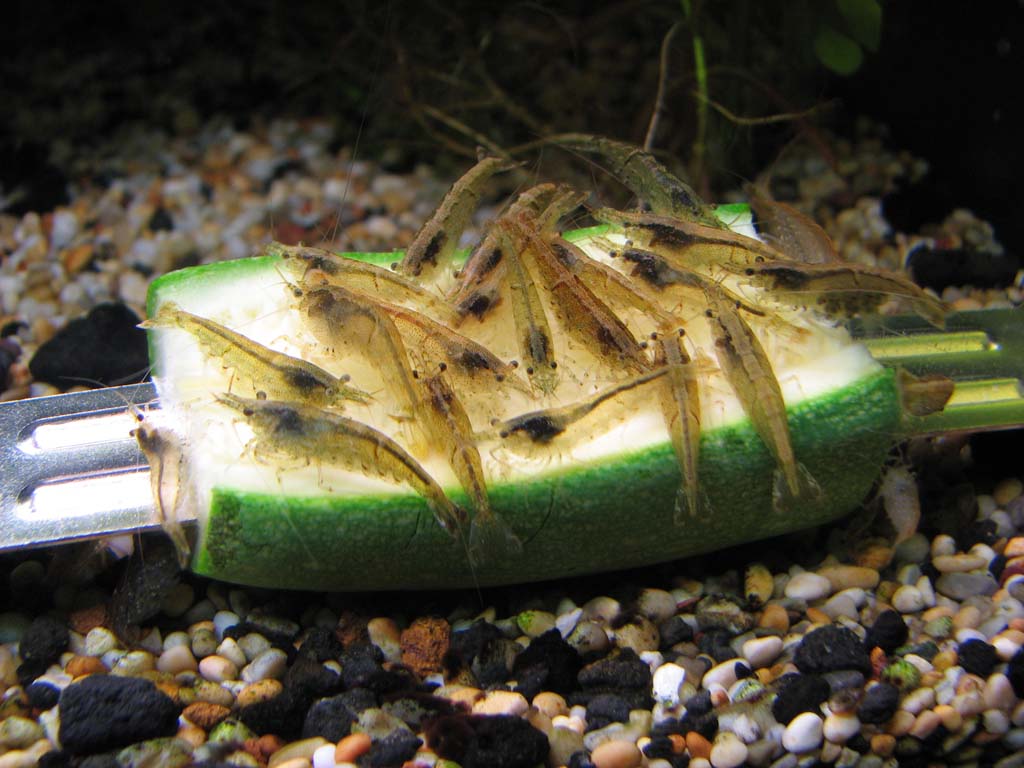 They look like Amano shrimp to me, that is far from a positive ID though!
J

Not Amano, more like wild Cherries which tend to be more brown than red.

Yeah I thought wild ones (Neocaridina Heteropoda) but wasn't sure if they would colour up later on into reds. They are breading like crazy and I have loads of little miniatures already. I haven't been able to get a decent pic of the redder ones that are in there but there is quite a difference although they aren't pillar box red by any means.

I'd agree with Neocaridina Heteropoda.
They won't colour up much - will stay a drab brown. The 'cherry shrimp' you see have been selectively bred over a period to produce a much more intense red. Still nice though

Hey chaps. A quick pic of the first ever plant to grow out of the water. Wonder if it'll flower? 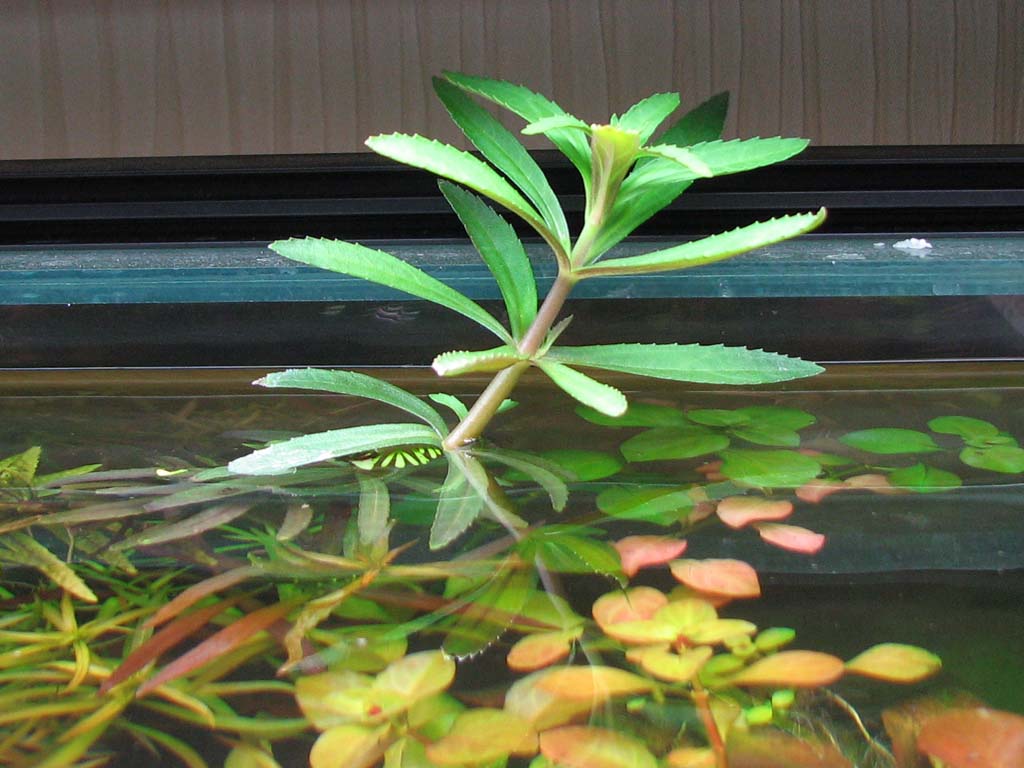 Nice pic, now its above the water line it may well flower.