Having bidden farewell to the Bucket of Mud, I thought I'd start up a thread for my next tank, although it'll be a couple of weeks yet before things start taking shape properly.

Firstly I need to say a massive thank you to Alastair for donating his old 4'x4' shallow tank, cabinet, TMC Growbeam 1500 and various other items for this project. It was a really humbling bit of generosity that I'm not sure I'll ever be able to fully repay.

So, what's the plan then? Well I've been backwards and forwards a lot on what to do with this... it was very tempting to return to my original plans for a Parosphromenus tank, but as ever I can't resist the urge to try new fish species and decided on a South American set up. I then spent a long time looking at blackwater SA biotopes. I love blackwater tanks, but my three nanos will probably be blackwater and I wanted something different.

South American clearwater then! In particular I've been watching a lot of footage by Ivan Mikolji on Youtube of Venezuelan morichales. These are relatively small, spring-fed, clear or moderately tannic waterways, generally located in grasslands and named after the moriche palms (Mauritia fluxuosa) which grow alongside them and dominate the littoral zone. The clear waters also allow for some really impressive aquatic plant growth in some areas, particularly in small pools that the locals call 'pozos'. Poco Pozo just means Little Pool

Some (quite long) inspiration from Ivan Mikolji's Youtube channel-

Jump to 7 minutes on the above video.

I'll update soon with prospective fish and plant lists for those interested.

Oooo watched a couple of his vids now, some amazing habitat footage. Building the tank around one of the dwarf crenicichla sp. would be an interesting challenge

Yeah the crenicichla are superb looking fish and seem pretty ubiquitous in that sort of habitat. Very aggressive when breeding though, apparently, and I'm not sure I have sufficient self restraint for a species tank!

I did say challenge nobody says it has to be biotypical, I'd be tempted to try pantodon buchholzi with them

this is gonna be goooooood!

EnderUK said:
Doesn't quite have the same ring to it as Bucket o' Mud but I'll give you the benefit of the doubt since it's you
Click to expand...

Pfff! It's relevant, snappy, alliterative and rhymes - what more do you want?

Besides, Alastair pretty much owns the Receptacle of Something Brown meme now, haha.

Can't wait to see your emergent growth for this one. You must have seriously high ceilings to accommodate palm trees

Can't wait to see your emergent growth for this one. You must have seriously high ceilings to accommodate palm trees

I have looked for moriche palm seeds but the only place I could find them has a 30 euro minimum order and I don't really need 20! They're super tropical in their requirements as well, plus I don't have 35m high ceilings, haha.

I do have a couple of ideas for a more suitable replacement, or I may use architectural ferns instead.

Sounds great Tom, looking forward to this one.

Subscribed. I'm sure it will be awesome Tom!

Firstly I need to say a massive thank you to Alastair for donating his old 4'x4' shallow tank, cabinet, TMC Growbeam 1500 and various other items for this project. It was a really humbling bit of generosity that I'm not sure I'll ever be able to fully repay.
Click to expand...

Your very welcome Tom. I know it'll be looked after well and put to good use or returned if not needed.
It was never given to have to repay. Its purely the enjoyment from seeing what you do that will suffice.

BigTom said:
Pfff! It's relevant, snappy, alliterative and rhymes - what more do you want?

Besides, Alastair pretty much owns the Receptacle of Something Brown meme now, haha.
Click to expand...

Ha ha yeah sorry mate. I've only got one more 'chocolate' surprise to go though so.

Really looking forward to this. Just seeing you running through your head how it will look was enough to know your going to do another belting job and the ideas you had. Good luck mate.....Im subscribed for the next however many years

And another subscriber... Don't make it too good please Tom, I'm running out of space to put tanks, thanks to your inspirationel Bucket, and now this? Always had a thing for South American clearwater, and I'm sure this one will be as epic, or even more epic-ier, than the Bucket!

A rather useful paper from 1981 surveyed four major morichales (http://limnoreferences.missouristat...l1985LimnologicalInvestigationOfTheRivers.pdf) and presents the following list of aquatic and marginal vegetation - 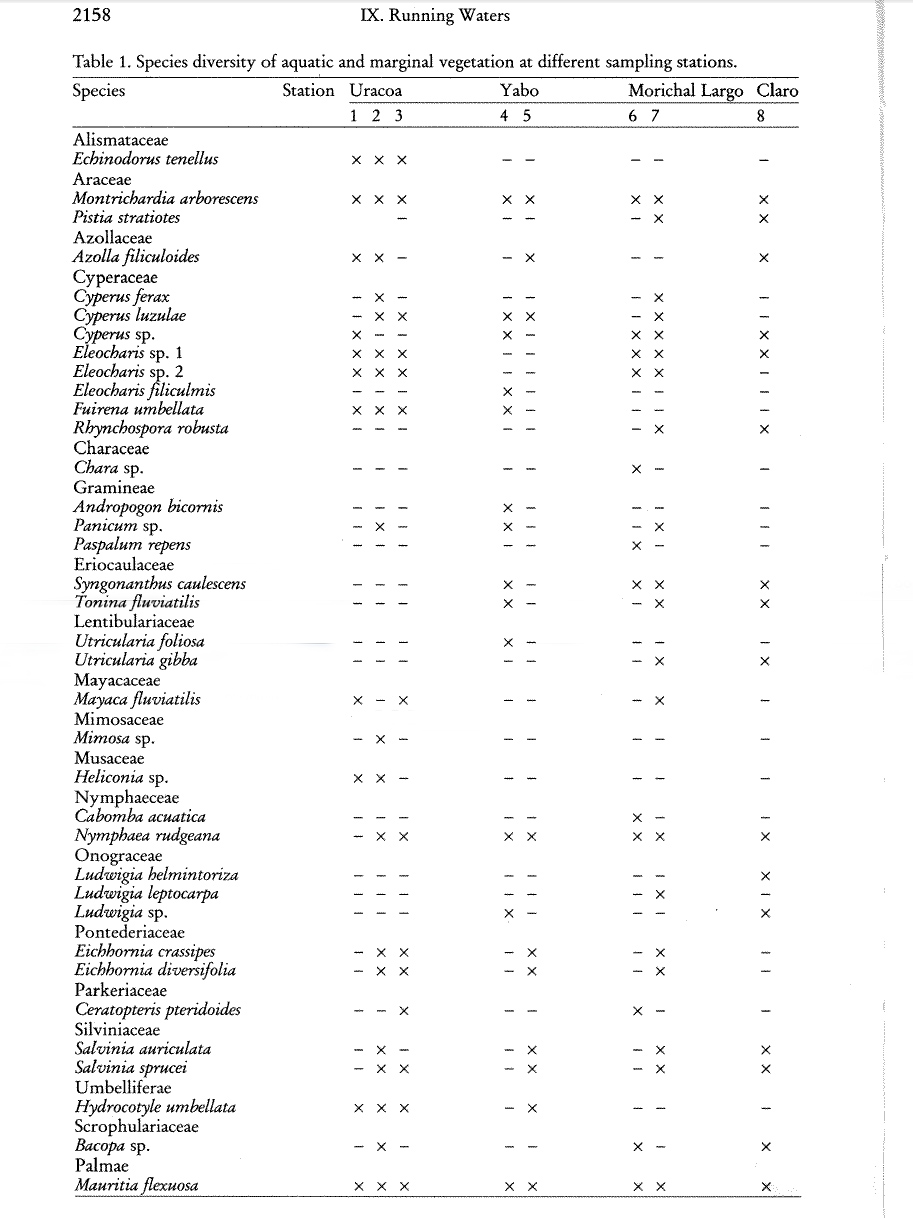 I went a bit over the top with trying out different plant species in the Bucket, so I'm going to try and keep myself to 4 or 5 submerged species here which can provide cover and interest without smothering the hardscape... I'm thinking -

Eleocharis acicularis and vivipara
Poaceae sp 'Purple Bamboo' (not from SA but the only actual grass I can think of that will do well submerged long term)
One stem plant to contrast (tbc)
And floating Ludwigia sediodes, if I can find it.

For riparians I'm all over the place at the moment... torn between continuing the grass above the water or smothering my emersed hardscape in ferns. Or both. Also on the lookout for a suitable focal plant... either a nice compact palm such as Chamaedorea microspadix or a good architectural fern like Pteris wallichiana. Or both.

I'm really looking forward to seeing this develop into another heroic journal.

There's a lovely selection of palms, grasses and ferns over at the palm centre.

There's a lovely selection of palms, grasses and ferns over at the palm centre.
Click to expand...