This will show the evolution of my 70cm AquaEL tank that I've had for a number of years. I bought this tank before I could really get into aquascaping, when I was 9. I spent all my money on it. For a while it contained 100s of vallis plants. That was my first success of growing plants, lit by a T5 tube.


After some years, I decided to take everything out, and start again. I didn't have the correct materials, 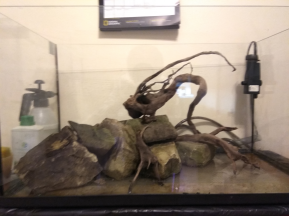 the first image attached shows it. I got a Kessil A160WE so I knew I was going to be able to grow something.

After this, I began to save up for the hardscape, as the rocks I'd found in my garden weren't really good enough to make what I wanted to achieve.


Last summer I visited Aquarium Gardens and Steve helped me out with some rocks and wood. 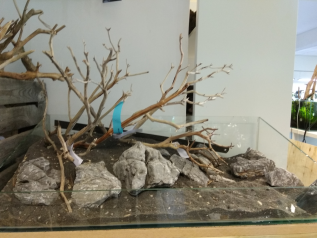 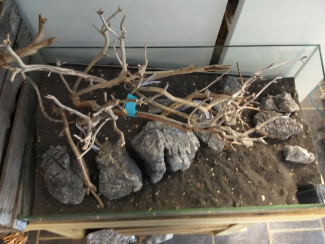 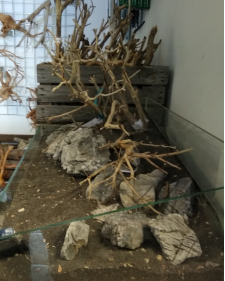 Then just before Christmas I went again to get plants. Luckily I got a Saturday job in my LFS so I could now save up more quickly, and pay trade price for soil, etc which helped.

-For the hardscape
Hygrophila Pinnatafida
Bucephalandra Biblis and Theia
Riccardia Chamedryfolia I didn’t attach it straight away waited for slime on wood to go.


I was determined to not have any java fern, this was not George Farmer’s tank, this was mine! I would be converted… 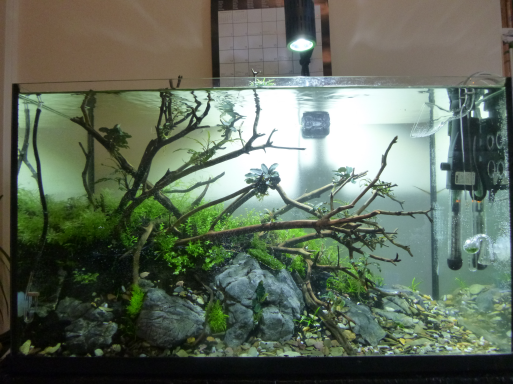 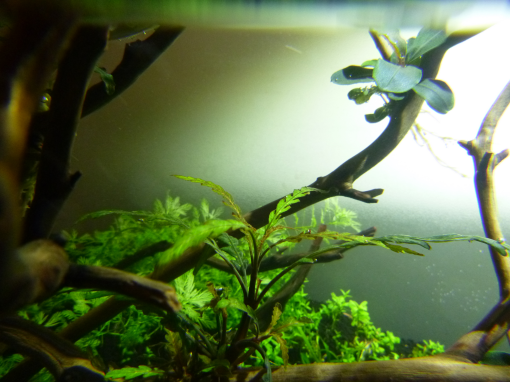 I followed Steve’s advice of doing water changes, 90% or so, everyday for the first month, then every other day, then every 3 days, until month 7 theoretically I would be doing once a week.

I stuck to it religiously for the first 3 months, but then, despite my efforts, the diatoms began to appear. It seemed to me that all I had done is slow down the process of a tank’s cycle by doing heavy water changes. However, what I learnt, through set-ups since this was-

-The EI dosing is for heavy plant mass, which hat the beginning you don’t have, so half, or even quarter it for the first month or three.

-If your plants are growing well on 6 hours a day and 80% brightness then don’t change it, even if you should be increasing it, just observe your tank and see what it needs more of.

-Add the Amano shrimp in as soon as is safe to do so, I was slow to do this


At around 2 months, I changed the light as the plants were all leaning towards the kessil. 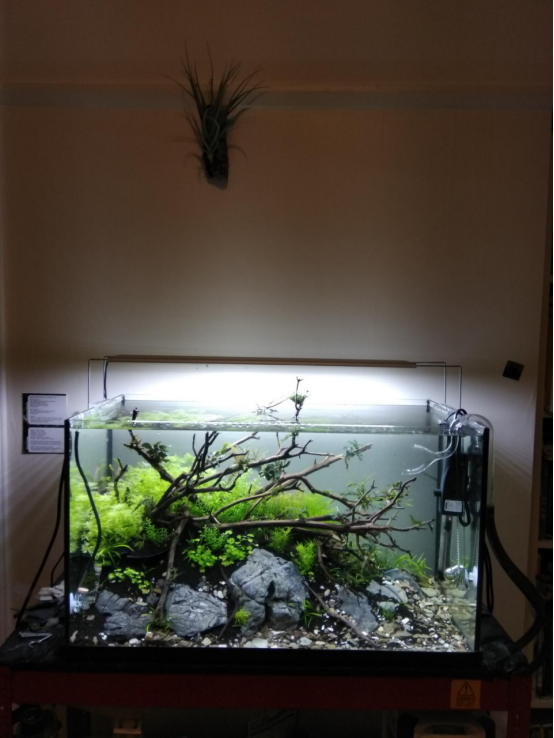 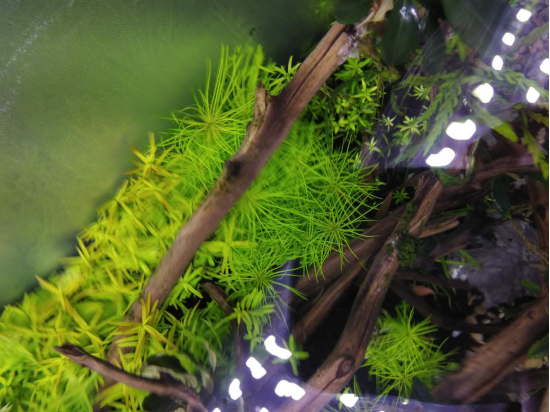 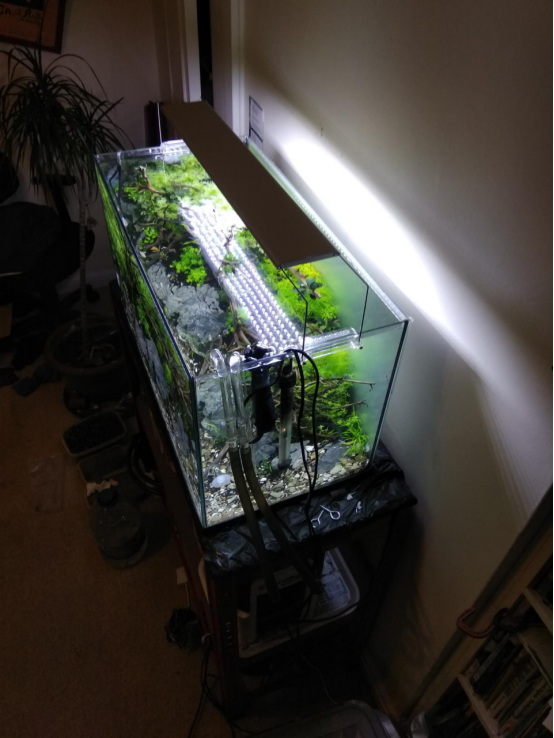 At about 3 months I got algae:

This killed my Myriophyllum mattogrossense and gratiola, I still haven’t replaced the gratiola, a lovely plant.

Part of the reason for the algae might have been that I still hadn’t added fish yet, I work in an aquatics shop surrounded by fish and couldn’t decide. After the fish were added (chequered barbs) and the ferts were turned down things started to improve. 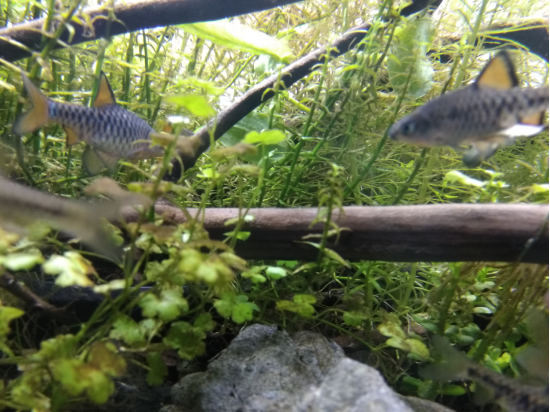 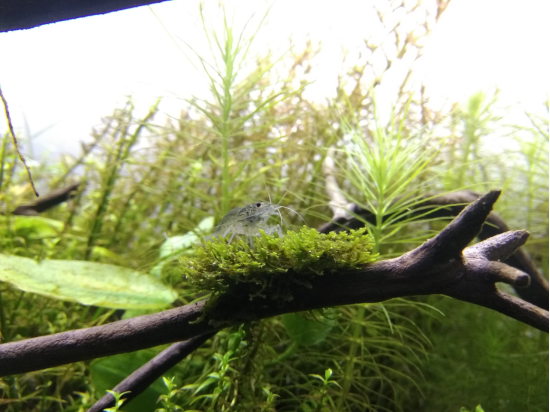 I added some Rotala amnia ‘Bonsai’

I added various plants to replace those that had died... Including Microsorum Orange Tip.

The Miriophyllum was replaced with pogostemon ‘octopus’

After a while, I added my favourite fish-

A week later is when everything went wrong- I have never seen so many dead fish: 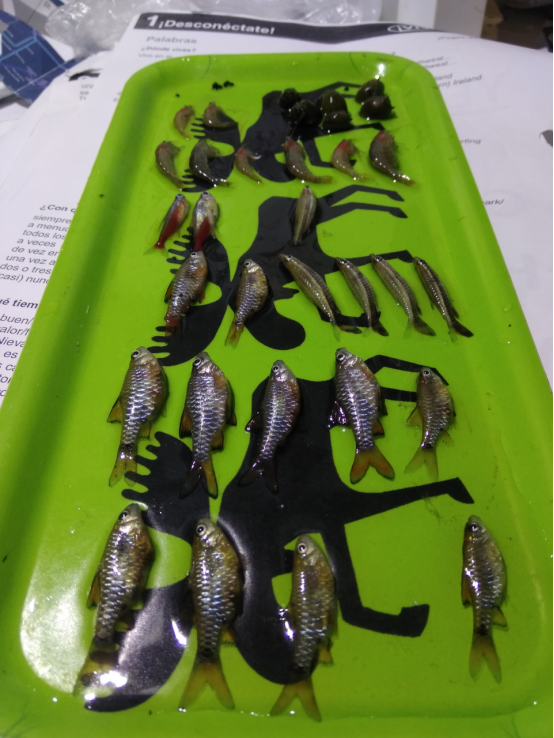 The spring in my (quite new) JBL regulator slipped, and the valve opened up to the full. The CO2 was bubbling out like an airstone. I had been at school when this happened. Everything apart from 2 snails were dead.

Eventually the tank recovered, I recovered and things started to improve. About a week before the photoshoot I realised I needed some fish for the tank, and chose Hemigrammus rubostriatus, they didn’t have much colour then, but now they are amazingly bright, but still subtle fish.
Here is the IAPLC photo: 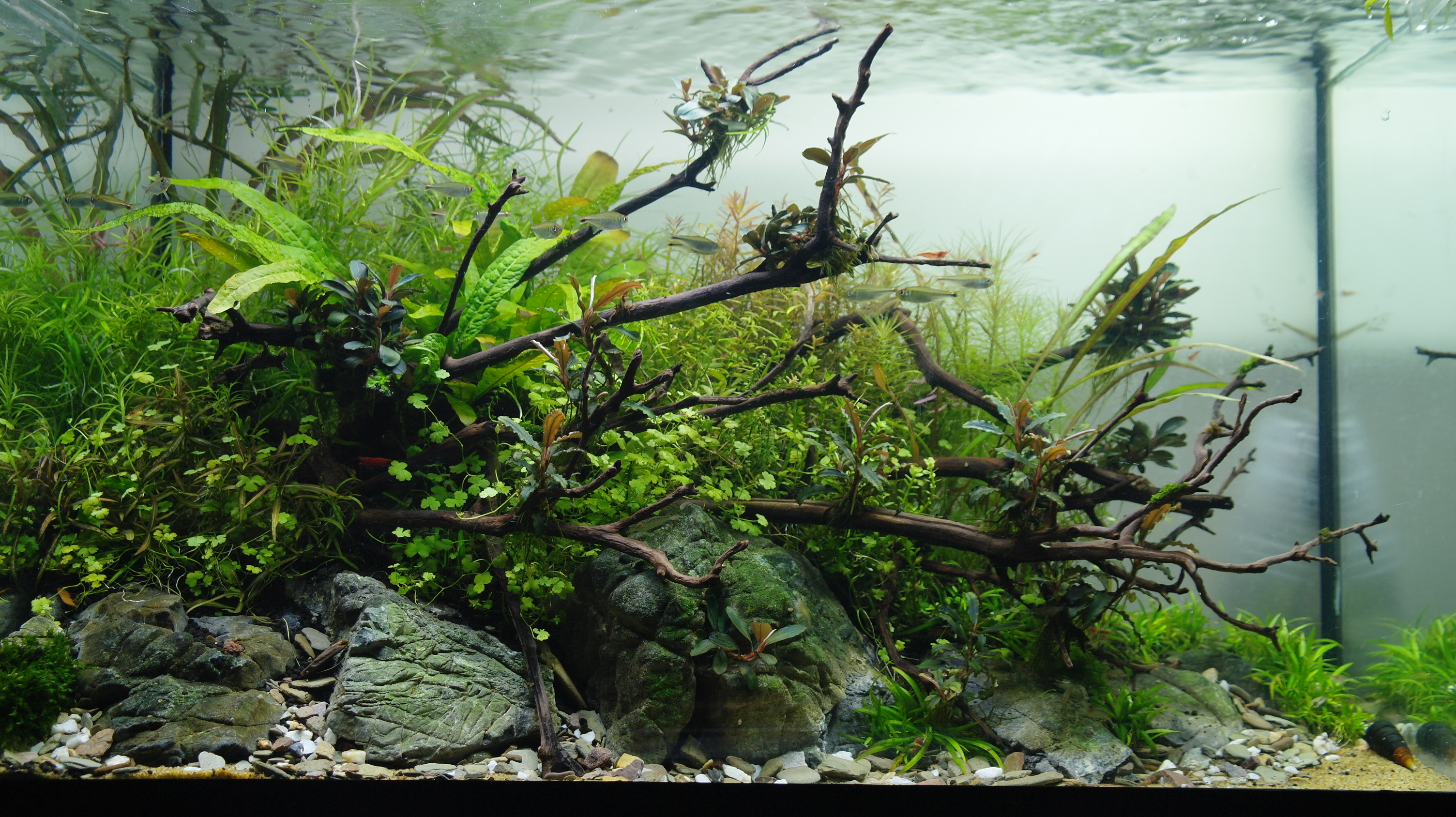 A month later is when the tank looked its best: 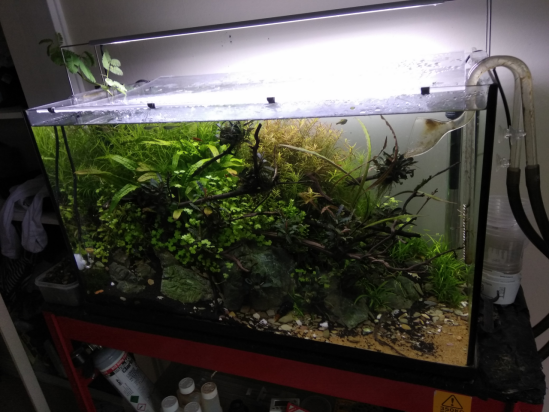 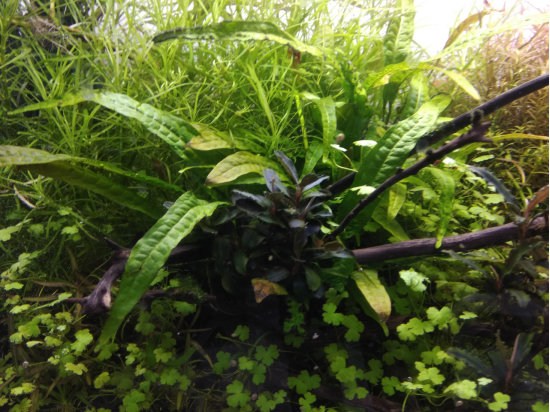 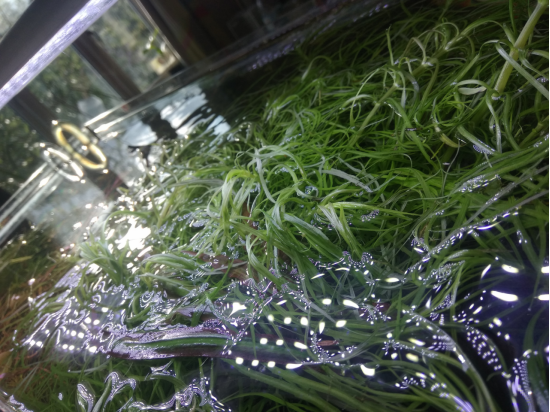 With the chihiros at full intensity, this is as bright as you’ll get the rotala H’ra.

Right now I’ve put soil in the front, and am growing a carpet of hairgrass. I’ll send updates. I’ve added Amapa Tetra. Also I use Fillipes ideology of small dosing for more compact and robust stems, and less algae. It works for me!
(after a trim, and I added the miriophylum again) 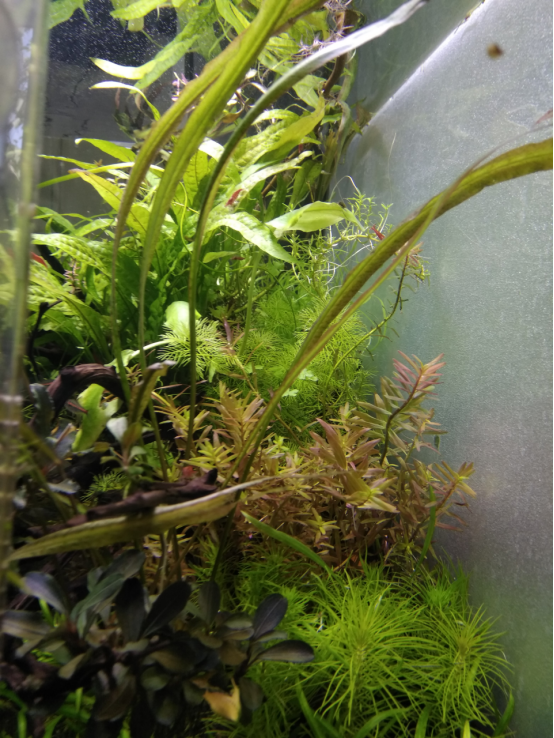 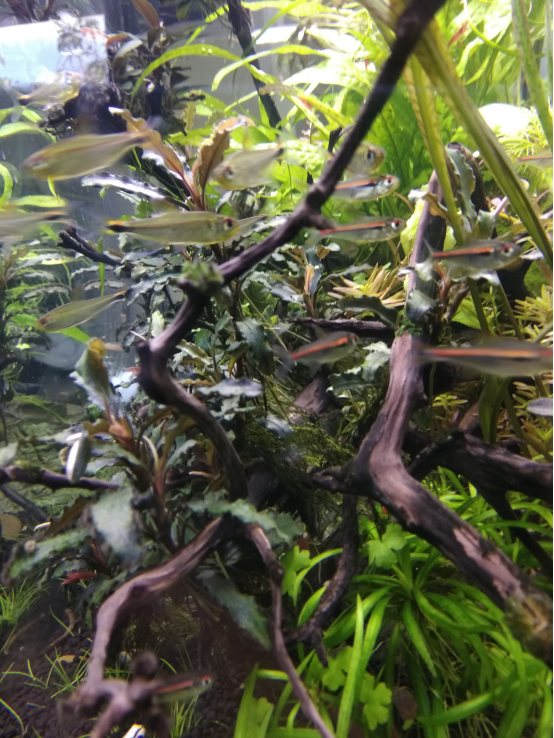 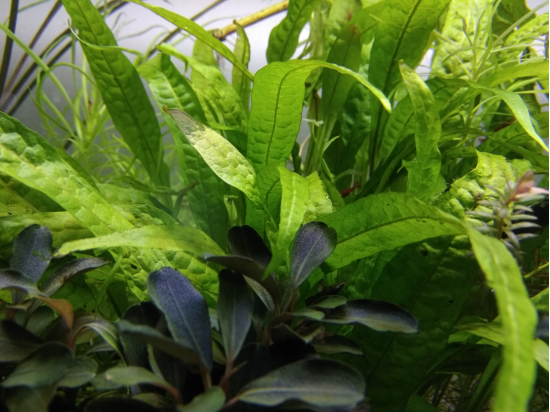 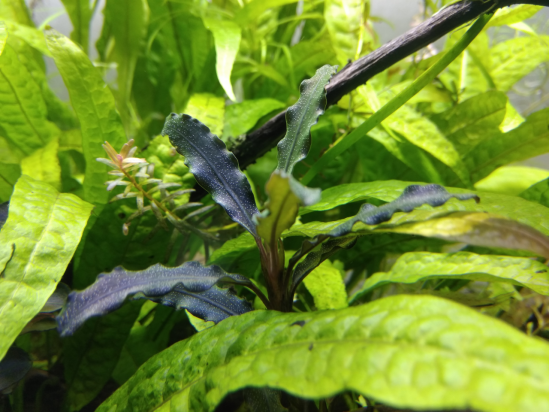 --A note about local water: while your water and my water may be hard, that is only part of the picture in growing plants. From my and other peoples experience if you live in London, everything about the water will be really bad. You’ll have increased algae and slower plant growth, simply due to the toxins and high nutrient content of living in an area of concentrated sewage(?). But London is good in other ways. Just not for our hobby!


Thanks for reading this,
Alex

Stunning aquarium. Should be proud, definitely got a talent for aquascaping.

Great read and one good thing about london is at least most of the good aquascaping shops are down that way.

Sorry about all the fish that died thats a shame but looks great now congrats on such a stunning tank.

Paul27 said:
Stunning aquarium. Should be proud, definitely got a talent for aquascaping.
Click to expand...

Deano3 said:
Great read and one good thing about london is at least most of the good aquascaping shops are down that way.

Sorry about all the fish that died thats a shame but looks great now congrats on such a stunning tank.

Thank you both, I have new plans for a 90-p. To replace this scape, but I'll do a final photo around November.
Yeah, London is really good for getting to shops which are good for scaping. Most of them sell R.O. water as well which avoids the London water problem.
You must log in or register to reply here.
Share:
Facebook Twitter Reddit Pinterest Tumblr WhatsApp Email Link