What are the ulcer like things on their shells, only a few have them, some have 1, others up to 4...they're spread over the shells in various locations. 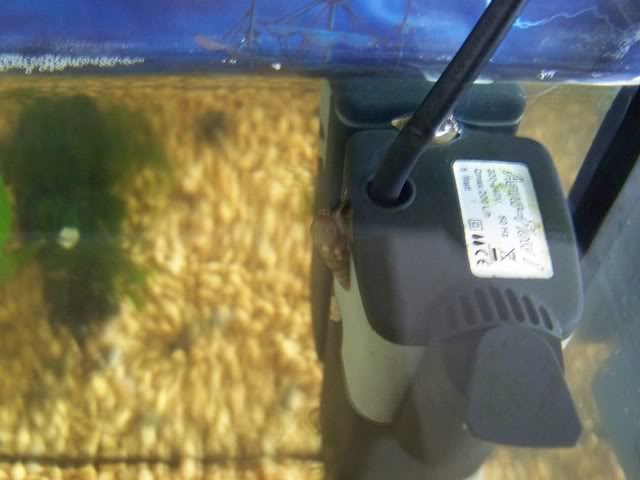 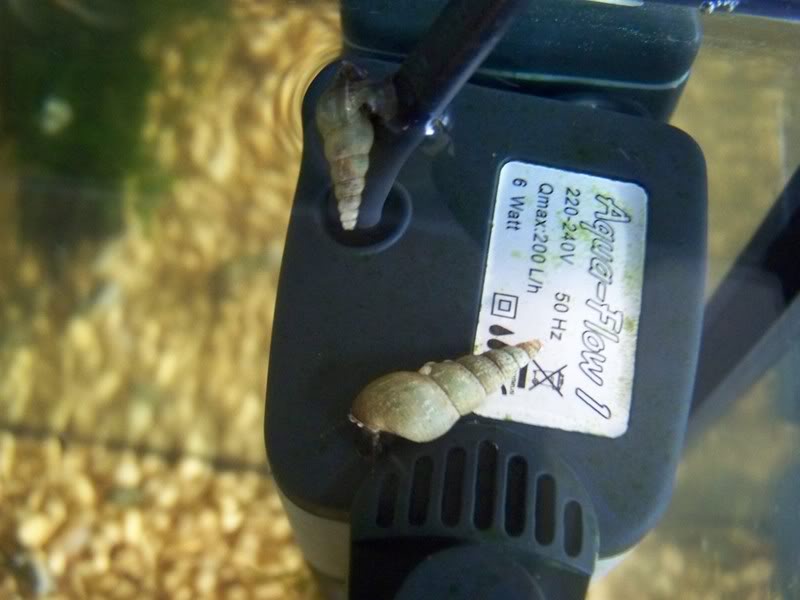 I have some MTS's but not seen any of that.
Is it ulcers on the shell or could it be baby snails?
My Nano Journal

Hope they are, I only said ulcer because that was the only comparison I could think of.

There's roughly 200 ish in their own tank (long story, DAN!!

anyway,
I've never had them before so I really don't know, do baby snails leave the egg jelly and cling to a snail?

MTS are livebearers - there are no eggs, so it can't be that.
Chrisi - planty n00b

ulster exile said:
MTS are livebearers - there are no eggs, so it can't be that.
Click to expand...

That would explain why after 2 weeks there are no eggs on the Java fern I put in the tank for them
That was going to be a future question, thanks ulster

So it's looking like it's a bacteria on their shells?

Is there a med safe for snails? :?

Don't know mate tbh - Am I mistaken that both pics show the same snail?

As this isn't a fish we're talking about, is it possible that you could take out the affected one and perhaps try and open up one of those lumps to see if it's hard or fluid filled? I mean, it's on the shell so perhaps you could take out of the tank and treat the shell, not the tank? Don't mistake my meanderings for advice (and especially not advice borne of experience)though - it's just what I would do if I was in your shoes!
Chrisi - planty n00b

ulster exile said:
Don't know mate tbh - Am I mistaken that both pics show the same snail?
Click to expand...

wow, you've got a keen eye

they sure are ulster, but the reason for that is that every time I try to get a close up of anything be it fish, snail or....anything, if it's behind glass the camera just will not focus so I snapped that snail over the top, but sadly many more look the same, some worse than that one.

I'm going to take one out of the tank and attempt to see what's in the ulcer thing, if you no what i mean, just to see if it leaks fluid, it's on the shell so can't hurt the snail can it? I'm thinking it's like a bacteria growth so will probably just be 'furry'

I'm not too worried because all the snails are in a dedicated tank with nothing else, but I'd still like them to be healthy
V

Do you have a nerite snail in the tank? They look similar to nerite snail eggs. Check the wood in your tank if there is any - if they are eggs they'll be all over that and they're a pain to get off!

Voo said:
Do you have a nerite snail in the tank? They look similar to nerite snail eggs. Check the wood in your tank if there is any - if they are eggs they'll be all over that and they're a pain to get off!
Click to expand...

it's just the mts in there

I've just taken 2 more pictures I don't know if these are any clearer? 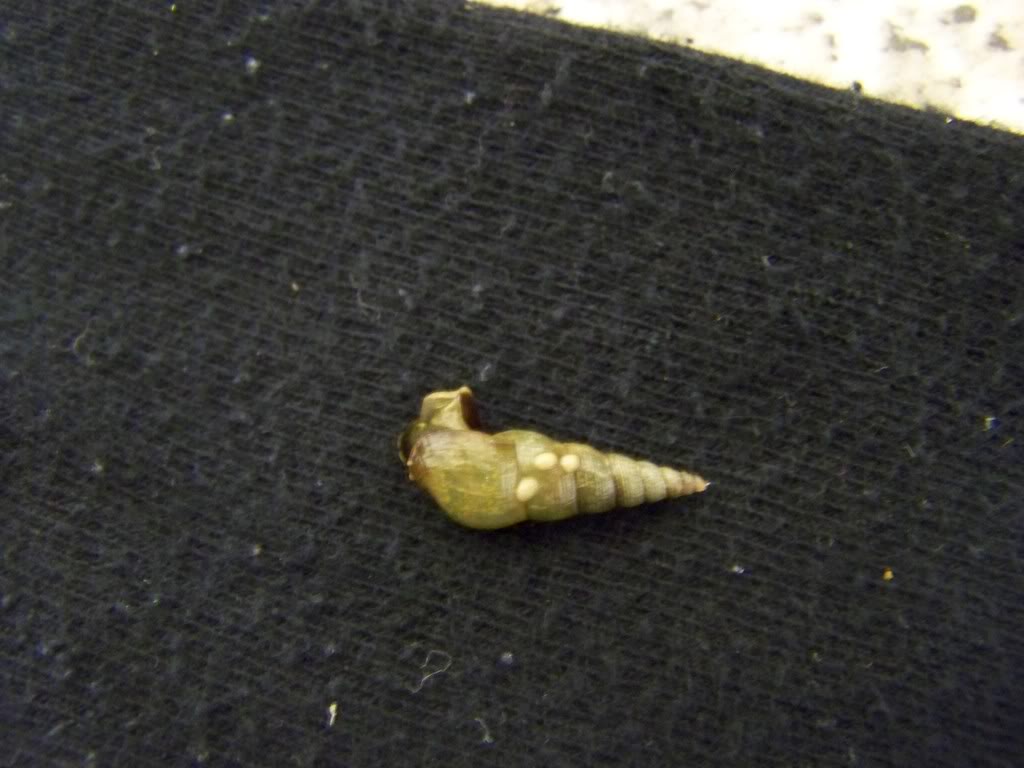 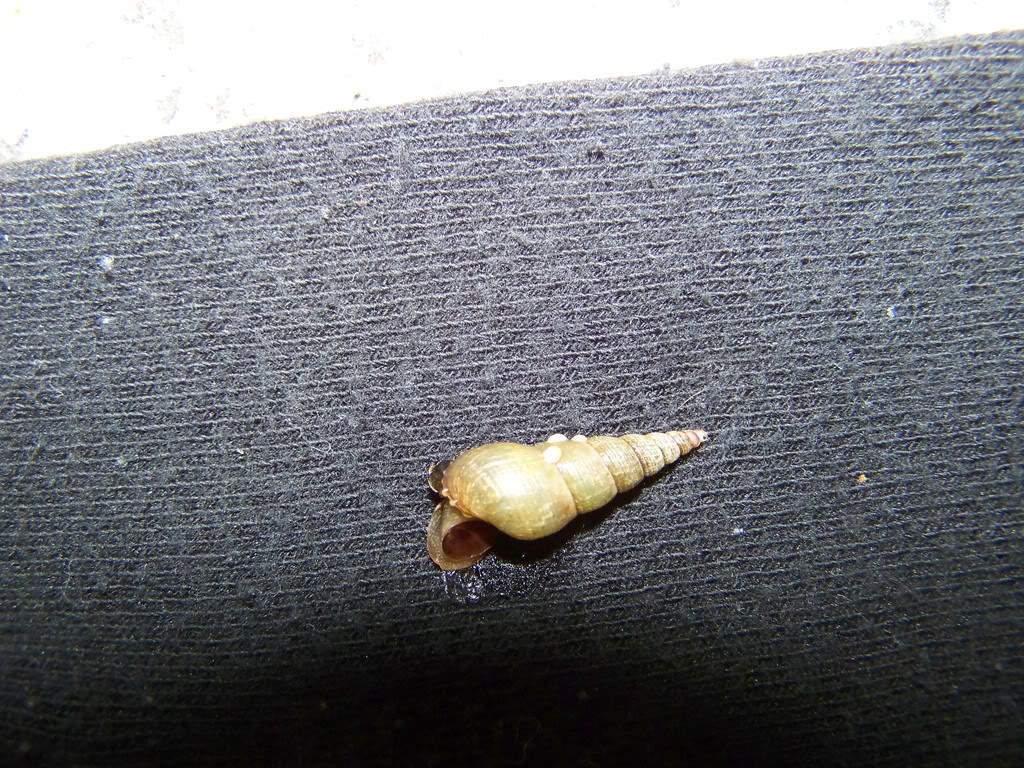 Hmm looks odd. Not sure tbh, they look a bit different to the nerite snail eggs I had.

Are they hard like a shell? How about if you shine a light near/through it can you see anything in it? Like you can with a chicken's egg.
My Nano Journal

No, they're just solid

the snails are acting normal, digging in the day, invading the glass on mass at night, so it doesn't seem to be anything other than some sort of bacteria on the shell?

Is there a non copper med for snails?
N

I'd PM Matt - if memory serves me right, he's got loads of snails and knows quite a bit
nickyc

i've just found a few of these trumpet snails in my garage tank, and a few have these white marks.

I think they are eggs of some sort, and these have appeared on my wood over time also, the culprits would be Nerite snails or Corydoras Sterbai, but i'm no expert.

so it looks like it's the nerite egg theory then Dan? although whatever it is, I've checked on some that aren't dug in yet and it's not spreading


nickyc said:
I'd PM Matt - if memory serves me right, he's got loads of snails and knows quite a bit
Click to expand...

I'll see what he says

If that snail is dead, scrape away gently at the growth, see if its solid or if theres anything oozy in it.. that should tell you if its some kind of abscess/growth, or just a calcium deposit.
Matt Holbrook-Bull
--------------------------
The only things that happen in an aquarium quickly.. are bad

If the blobs appeared after the shell had formed, i.e they popped up then I doubt they're calcium deposits but are more likely to be some sort of limpet or parasite.