Apologies if this is in the wrong area. I thought it was DIY(ish)

I'm putting together my first aquascape and interested in using dead branches/twigs from cuts in the garden.

They're long dead, fruit tree (apple & pear) trimmings that we cut from our trees a couple of years ago.
After stripping the bark off and soaking they have these interesting patterns but also seem to go quite dark brown or black in places.

I haven't tried boiling yet but wondering if I should just bite the bullet and seek the usual commercial channels. A shame as some of the patterns are interesting.

Ive attempted to add photos but not sure if they will upload. Tapatalk doesnt seem to want to work on my mobile phone.
I've used 'thumbnails' option as I don't want to burden UKAPS' servers with big files (at least until I've read that it's ok to do so) 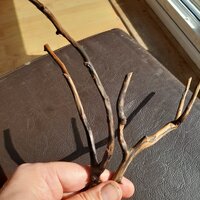 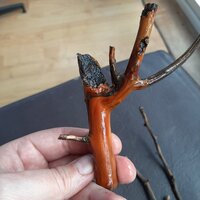 You are absolutely fine to use them, and you don't need to boil them.

The boiling is as much to kill off anything that might be precipitating the grey lustre as for other parasites but if it’s not needed I wont. I can use a rotary tool to shift the dark stuff but once dunked back in a bucket, back it comes.
Thank you for the reassurance

Just thought I would post a couple more thumbs of unskinned bits for anyone doing similar. The reddish one (with black spots in this case) is, I'm pretty sure, Mulberry. The browner stuff is almost certainly Apple.


Hope this is useful to someone.
Bg

Big G said:
The boiling is as much to kill off anything that might be precipitating the grey lutre as for other parasites but if it’s not needed I wont. I can use a rotary tool to shift the dark stuff but once dunked back in a bucket, back it comes.
Click to expand...

I'd just put it in the tank. Fruit wood is used quite a bit for <"feeding Panaque spp. etc">.

Big G said:
The reddish one (with black spots in this case) is, I'm pretty sure, Mulberry.
Click to expand...

I think Morus spp. have contrasting darker heartwood, Morus alba definitely does, but I think M. nigra does as well.

I've used fruit wood many times and I don't even strip the bark (shrimp love picking at it) or do any preparation other than a presoak. I do the same with oak, beech etc but I don't have pristine planted aquascape where flaking bark may become a problem in a year or two.
After a couple of years in the garden I'd think you have even less to worry about so have fun scaping.
B

Thanks folks. That's extremely helpful to know. I'm just so amazed by the textures and patterns in there. Love 'working' these bits of wood.
The time permitted by not commuting from cv19 and thinking on 'Nature Aquariums' has really tuned me in to the botany, biology,science, art, handcrafting and, dare I say it, peaceful and contemplative side of things.

Might try my hand at sculpting some of the twigs and branches after an inspiring Dennis Wong video I watched.


I do indeed plan to have shrimp once the tank is ready. Good to know they'll enjoy it.

Ukaps is my first source for everything.