Two female bettas in a 50 gal community tank - can it be done?

I know this sounds absurd but hear me out,

My LFS has a big tank of female bettas together. Not only are they completely passive towards each other, but they like to jump between tanks. As a result there are females mingling with a dozen different species in that shop, including guppies. I bought one a month ago hoping she wouldn't get into any squabbles. It paid off, she's sweet as pie and there's no aggression at all between her and the others of the members of the tank including 6 guppies, 2 kuhli loaches and 9 otocinclus. She was a tiny little baby when we got her, as were all the others in that tank.

I'm tempted to go back to the store and get another female as they are such great fish, and they all seem really passive in those tanks. But I know that when keeping females together, less than 3 is generally considered a no-no. With tons of plants to break the line of sight, and these bettas all being used to mingling with others, though, am I likely to get away with this? Has anyone had a similar setup?

I’m sure that if it was extremely densely planted and filled with other fish it could work out!

I’d advise against this - while unrelated females may seem to get along as young fish, they will often become less so once mature ... you can try of course, and as the tank is fairly large, and densely planted, may have some success
But if one girl decides she’s done sharing ...

In general, larger groups (10-12 not 3-5) do better longterm - though you often still have to do some adjusting of individual fish to establish a stable group, you can expect to see some disagreements but no endless harassment (until the subordinate fish jumps out or eventually dies)
This is easier to accomplish if you have multiple tanks, also a shop that will accept returns of unsuitable fish

True “sororities” are females from a single spawn, these girls get along much better than the unrelated mixed groups which are put together at shops (but usually still requires some removal of unsuitable fish, eg, the most dominant, the most subordinate)

Occasionally, one can also keep a couple males in the sort of tank you describe, but again it takes time and effort to find two compatible fish

Giant Bettas seem more laid back, with people apparently keeping mixed sex groups, also all male groups
But I wonder how many of these fish were still kept successfully 2-3 years later .....

The thing with female bettas, is that they can be more vicious than the males. And will rip each other apart if the mood takes them.
Think of them like Tiger barbs with Diva Complex's. To be in a sorority they need to be kept in groups of 5 or more in Odd numbers, never even. And there need to be plenty of line of sight breakage and lots of cover for them in chill in.
As long as you follow that, they should be fine. Also some females will build nests if they feel like it. So do please allow for some floating plants. They also appreciate broader leafed plants to rest upon.
HTH
Meander, Counted Sorrows,
Experimentation is the key to growth - Pardeep

Why not look at some other betta species that can be kept together ?

Thanks for your input everybody - we added some more neon tetras today, and our sweet little lady betta saw her reflection in the floating bag and started launching herself at it lol. I think that tells me a second betta would be a bad idea.
A

spleenharvester said:
started launching herself at it lol.
Click to expand...

Yes there will definitely be a reaction, and multiple Bettas will always sort out a hierarchy - the desired outcome is a group of fairly evenly matched, laissez-faire personalities (the two boys I had, a third boy who was to be part of the experiment was not playing nice so he moved elsewhere)

If you did choose to add more female Bettas, it’s important to add multiple fish at the same time, so that aggression is dispersed; it’s also recommended to remove the “home girl” to a temporary accommodation (with lid!) to allow the new fish to suss out their new home and good “least in sight” places, before adding your original girl back
(she will have convinced herself that the entire tank, regardless of size, is HER territory)

Back when, I added a lovely male Betta to a densely planted 25gal aquarium with a very nice female Betta, no apparent reaction during the first couple hours, he mostly stayed in the upper level and she played least-in-sight ... in the morning he was dead
and She was swimming grandly about
Although this situation had worked well for a good number of (Betta forum) posters (and the shop even recommended it), it failed miserably in this instance as the female was very aggressive - if I’d introduced the male by placing him in a safe enclosure (such as a Lee’s Specimen Container which hangs on the tank), and observed over a few days rather than a couple hours ...
S

Came across this thread again and thought I would update.

I did eventually get a second female betta about 5 months ago, and just watched the tank very closely for signs of aggression. The second betta came from the same (quite densely packed) female betta tank from the same seller (though they definitely won't have met each other before due to age). Observed the tank closely for a bit, and picked her based on lack of visible fin damage, lack of stress stripes, and no signs of aggression towards other fish. So far it's been a success

For the first few weeks there was some chasing from Lipstick (the older fish), but no actual physical harm. After that they completely settled down, and would often sleep near each other (see pics). They've become a little more territorial as they've gotten older, they both tend to sleep in their own little areas of the tank that they've claimed, though still occasionally sleep together. Lipstick doesn't appreciate Princess entering her frogbit corner and will chase her out if she approaches, but no actual harm/fin nipping. They quite happily hover around together outside of those areas. I was a bit worried there'd be trouble recently as we unfortunately lost all 13 of our guppies in a very short space of time, which meant they were in a 50 gallon pretty much on their own, but they've been absolutely fine.

Thinking of adding a third, again from that same store, with the same strategy as before. Can always get a tank #5 if it doesn't work out! 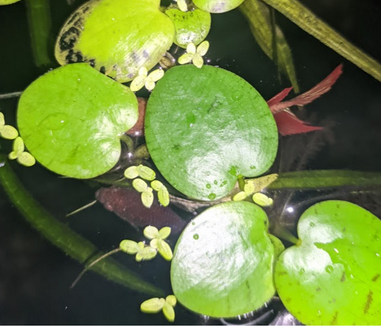 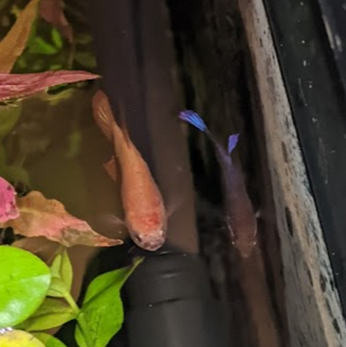 Unfortunately this one has come to a sad end. We found our Lipstick dead a few days ago at only 8 months old. No injuries or signs of disease. We snapped a photo of her begging for food at the top of the tank, then a few hours later she was just dead in one of her napping spots. We miss her dearly. 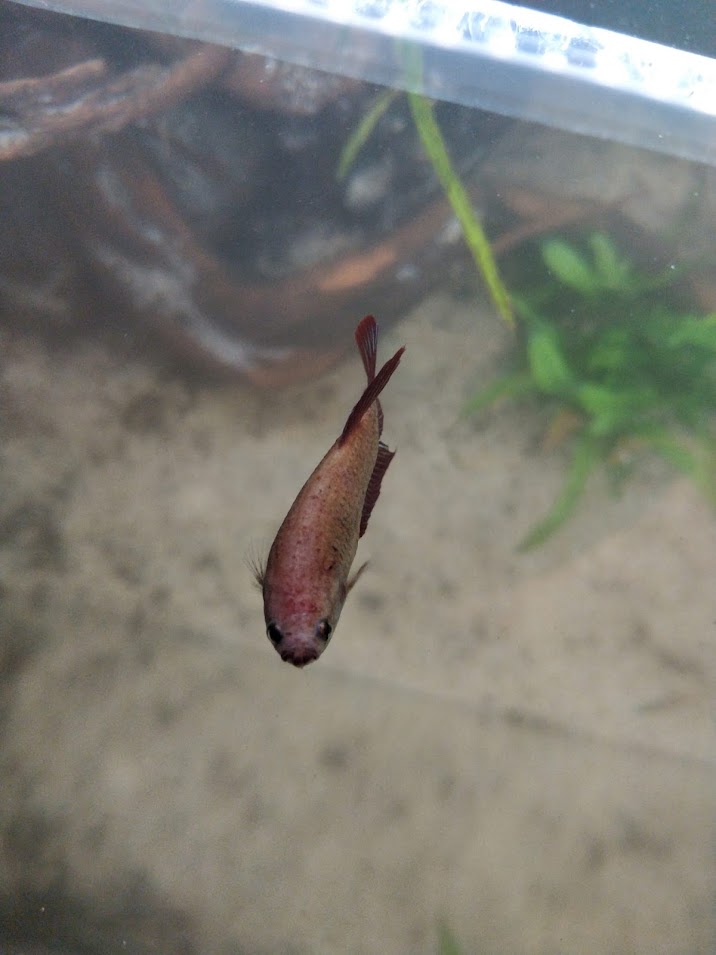 We tried introducing another female to Princess. Unfortunately they had to be separated in all of 30 seconds as they immediately started fighting. I think we probably just got lucky with Lipstick and Princess pairing up.
You must log in or register to reply here.
Similar threads