I set up a pond in a bowl inspired/copied from James Wong and I’ve encountered a few issues. It’s not heated, not filtered, not got additional CO2 and I don’t use fertiliser. For maintenance I do a 100% water change at least once a week, but whenever I feel like it. The plants are Micranthemum Umbrosum, Eleocharis Acicularis ‘Mini’, Nymphaea Pygmaea ‘Helvola’ and some Bucephalandra and Anubias.

1. I get a lot of surface scum which I remove at twice a week with paper towels.

2. I get small amounts of Cyanobacteria around the edge of the bowl, which I remove when I feel like it. At first there was a larger outbreak, which I associated with decaying plant matter as the plants adapted.

3. The water lily has not grown any new leaves, though I have seen new roots, and it has lost all its old leaves. Its been at least 3 months since it was removed from a cup with the same lighting that it recovered under after losing leaves (I bought it from a garden centre in autumn 2019, so it was in the process of dying back).

4. The Monte Carlo is displaying some mild deficiencies pictured below, but I can’t identify it. 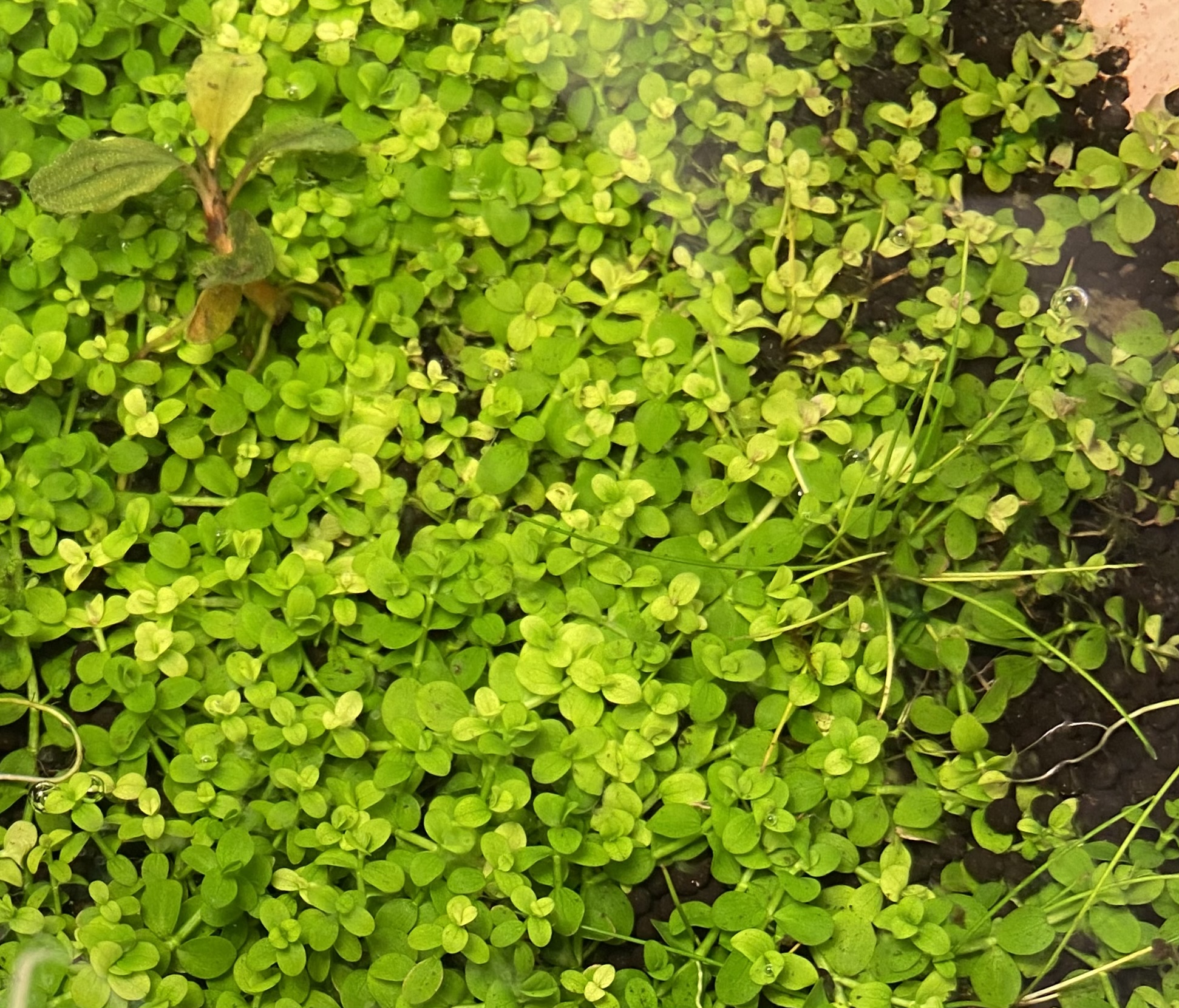 glasscanvasart said:
The Monte Carlo is displaying some mild deficiencies pictured below, but I can’t identify it.
Click to expand...

It is probably iron (Fe), just because <"iron deficiency causes yellowing"> (chlorosis) and iron isn't mobile within the plant, meaning that the symptoms occur in new leaves.

Thanks Darrel, I thought it might be. I’ll throw some Trace Elements at it.
Anyone got any ideas for the other issues. The surface scum and Cyanobacteria are manageable, but irritating. I suppose an obvious solution for both would be filtration, but I’m not going down that path. I heard that stressed plants contribute to surface scum (protein release), might fixing the water lily kill two birds with one stone?

An indoor pond in a bowl? If so I think the water lily is going to need an annual cold period to do well, as it is a temperate variety; without this it might just burn out. Worst case scenario you could keep the rhizome in the fridge in a plastic bag with damp compost for 3 months every year. Might need pre-chilling to encourage it to enter dormancy before putting in fridge, not sure if it can transition straight from warm to cold.

'Pygmaea helvola' is very beautiful and the ideal size for keeping indoors. I would love to keep one in a tropical aquarium but unfortuately not possible. What I am thinking about doing one day is an unheated bowl (or other container) that I move to the greenhouse in winter for a few months. Could also be kept year round in an unheated conservatory.

P.S. as your lily currently has no leaves I would dig out the rhizome and check condition. If it seems to be firm and healthy try the fridge method, if it is squidgy throw it out and buy a new one in the spring when they come in to garden centres. If some parts of the rhizome are healthy and others not just cut out and keep the healthy portions.
Last edited: 21 Feb 2021

James Wong has had success with the same species in multiple aquariums and in above 20C all year round. The lily came back for me after dying back, I tried it in multiple environments, high tech aquarium, under sunlight and under the lamp it’s under now. It didn’t grow in the aquarium, but grew under sunlight and continued to under the lamp. I think what caused it to die back the first time was seasonal dieback, as I bought it in autumn.

This time, I think it died back because it changed containers and I had to cut some of the root system back. I think I’ll just let it be. I have a feeling that bulbous and rhizome plants can just come back from the dead if left alone.

Anyone got any ideas on what causes Cyanobacteria or any solutions that might work for me? It gives off an unpleasant swampy odour, so it’s the issue I’d most like to fix.
You must log in or register to reply here.
Similar threads