When can I add amano shrimp and how many?

Hey guys. I've got a newly set up nature scaped aquarium going on for about 2 weeks, ammonia is now gone, nitrite is showing at around 2.0ppm. I haven't tested nitrate yet as I figured you need to wait for nitrite to be 0ppm or so before it's relevant to test for nitrate.

I am using the master test kit from api, ammonia is yellow coloured, nitrite is deep pink if that helps.

Anyway. I have a 200L 100cm wide 45cm deep and 50cm tall tank, heavily planted with ada aqua soil and power sand base.

I'm starting to fight algae quite a bit now, and would love the help of amano shrimp and otocinclus right about now, is it safe?

How many should I add? I was thinking 15? And like 8 otocinclus. 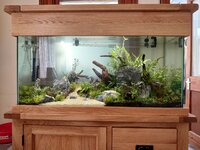 According to Tropica plant guide amanos are added at day 5 (if I remember correct).
I'm not sure I would with nitrite at 2.0 ppm.
Do not at Otocinclus for at least a month or two. They need a mature tank.
I

kilnakorr said:
According to Tropica plant guide amanos are added at day 5 (if I remember correct).
I'm not sure I would with nitrite at 2.0 ppm.
Do not at Otocinclus for at least a month or two. They need a mature tank.
Click to expand...

OK well I can definitely just start with the shrimp then if it's safe. I'll wait for one or two more confirmation responses and then bite.

In regards to amount? Does that seem right to you?

As for otos I can wait. That's no issue.

Unless you’re getting a particularly good price for 15 I’d buy just 5 instead and see how they get on. If they’re all still ok after a week or so I’d buy another 10.
I

Aqua sobriquet said:
Unless you’re getting a particularly good price for 15 I’d buy just 5 instead and see how they get on. If they’re all still ok after a week or so I’d buy another 10.
Click to expand...

Good shout. Do you think this would be safe with my current water parameters? Also do you think 15 end goal amount is OK?

Also depends on your frequency of water changes. If you let water sit there for a while, it will get toxic very quickly. I personally put in amanos after first week, while doing water changes every other day.
EA600 Easy High Tech Jungle
40cm Cube - Bob's Tree
5G Nano - The Mountain (disassembled)
I

Harry H said:
Also depends on your frequency of water changes. If you let water sit there for a while, it will get toxic very quickly. I personally put in amanos after first week, while doing water changes every other day.
Click to expand...

Being at home now, I've been doing changes every other day.

Personally I would put them in now then, assuming you are doing 50% changes, you should be fine. I never had problems with that.
EA600 Easy High Tech Jungle
40cm Cube - Bob's Tree
5G Nano - The Mountain (disassembled)

Amanos seem pretty hardy so I’d give 5 a try. You could have quite a large number in a 200L tank but it depends ultimately how much other stock you intend to put in there. To be honest Amanos do a good job at clean up but they’re a bit boring. I only had a few in my tank before adding some cherries and they’re much more attractive in my opinion. They decided to breed in my little 37L Nano and I now have probably hundreds of juveniles and babies in there.
I

I'm going to buy 8. And then eventually I'll get otos, then the rest of my fish can be added. Probably a goal of 5 species including the amano and otos. Wanna keep it simple.

I think ultimately ill have

kilnakorr said:
According to Tropica plant guide amanos are added at day 5 (if I remember correct).
Click to expand...

@GreyFoxIndy are you following ADA water change and fertilizer protocols?
(this should help limit nitrogen buildup and also reduce algae)

@GreyFoxIndy are you following ADA water change and fertilizer protocols?
(this should help limit nitrogen buildup and also reduce algae)

I am indeed following water change and fertz protocol.
A

then I’d guess daily 80-90% water changes, so 2ppm nitrite would be unusual

This article may offer some guidelines

Nitrite levels should be monitored regularly and be kept under 0.1 mg/l to avoid possible toxicity. Treatment modalities includes addition of chloride ions, which may competitively inhibit nitrite uptake across gills (Bowser et al., 1983). Sodium chloride or calcium chloride can be added to tanks, but care should be taken in increasing salinity of water slowly. Using a 3-mg chloride to 1-mg nitrite ratio, channel catfish (Ictalurus punctatus) have been successfully treated for nitrite toxicity. Use of calcium chloride can be added at a concentration of less than 50 mg/l (Tomasso et al., 1979). The goal of treatment should be the establishment of a stable, healthy biofilter.
Click to expand...

My amano shrimp will arrive on Thursday. My tank is now officially showing much less nitrites than reported above and is nearly fully clear. Hooray, I anticipate that by Thursday even more nitrite will have disappeared.

Anyway quick question, should one perform a water change before adding shrimp? Or wait a while?

Furthermore, When is it safe to do water changes once shrimp have been added?

I will drip acclimate them prior to adding them, but again, should this be done in freshly changed water or no?

I usually do a water change before adding new livestock, this way I know I don’t need to potentially stress them with scheduled water change - I try to add new fish/shrimp only once the tank is on a weekly water change schedule

Shrimp can be more/less sensitive depending on source, I always ask seller about current water conditions, food, water change schedule (sometimes I even get answers ) - strip test (or remove a sample of) the water shrimp arrive in, then add some diluted Prime etc soon after opening the bag

Shrimp are generally most sensitive to GH and pH (though Amano are relatively hardy)
(TDS can be skewed by any salt (NaCl) that is in the shipping water - had shrimp arrive with TDS over 2000 despite seller assurances of 100-150 ppm GH, minimal KH, pH 7; some of the shrimp were in “black water” but TDS was still over 1500 - KH/GH tests were close to expected, hence the NaCl guess ... especially as the guppy bags all had similar TDS)

PFK has a good general article on Amano Shrimp
https://www.practicalfishkeeping.co.uk/features/amano-shrimp-spineless-heroes/

In the last few years, the incidence of alternate species shipping as Amano shrimp has substantially increased
(some are more/less hardy and more/less aggressive)

If you see that most of your new Amano have moulted, wait 24-36h before doing a water change as shrimp are chemically and physically sensitive until the new exoskeleton “hardens”

I also tend not to feed the first couple days, as I don’t want to trigger a moult (usually this will only happen if excessive food is given)
Note shrimp may be triggered to moult after being introduced to hew tank parameters

I also usually drop water level a few cm’s below tank rim to discourage wandering by newly introduced shrimp, after a couple weeks of apparent shrimp “happiness”, I’ll slowly increase water level back to normal
I

I've gone ahead and added 10 shrimp! They're happily grazing away within the first millisecond of adding them.

10 are just way too little amount for the size of tank I have.

Love them... My first tank inhabitants

Next I will add the additional 15, around 8-10 nerite snails.

Then in a couple of weeks I'll add my otocinclus. A bit unsure how many to add though. Any pointers?

For Safety reasons, I've added a cap full of prime today just to help keep nitrite and nitrate down, this is because I don't believe my tank is fully cycled and now that I've added amano shrimp I don't want to harm them, its been exactly three weeks now since the tank has been running. I'd imagine it'd need a little more than three weeks to become fully cycled.

So, my question is, adding seachem prime isn't harming my cycle is it? It's not killing the beneficial bacteria that are needed to convert nitrite to nitrate is it? Etc

I guess I'm creating a false positive by using Prime, by making me think that the tank is safe during api master kit tests, when it actually isn't.

Any input here?
A

Looking at the photo, I’m what concerned - opaque looking shrimp is never a good sign
If they looked like this immediately after you added them, it’s shipping related (or seller related)
If they look like this after several hours to overnight (or 3-4 days) in your tank, it’s less easy to assess cause (seller related or your tank related)
That they are active and eating is a good sign, I’d also feed some shrimp food with higher protein content (eg 1-2 frozen bloodworms per shrimp every couple days (if you don’t have any shrimp specific foods) ... otocinclus also enjoy a bloodworm treat now and again)

It’s fine to add 5-10X Prime dose to your tank, just dilute it first so that livestock don’t swim into undiluted Prime - when you add Prime and other water conditioners (and various other aquarium products) you can observe a schlieren effect as the more viscous liquid falls into the water ... it’s good practice to avoid this by pre-diluting the additive

Neither Prime nor Stability will negatively impact the filter cycle

I’d add 5-7 otocinclus, obviously you could also add more but then you’ll also need to be more consistent in additional feeding
I

In the three weeks I have had my tank setup I was following the setup steps set out by ada.

Second week 16th April, every other day, added stability and prime each change.

I was thinking to do a smaller water change tomorrow, dose prime and pristine.

Here is a small video of the shrimp from today, I can usually spot around 5-7 shrimp all busy grazing and seem generally happy

As long as your tap and tank water are well matched, I’d not worry about 50% water changes ... of course, the more you change the tank water, the more likely it is really more like tap water (in the ways not easily measured by an available hobby kits)
So maybe consider 25% daily water changes - this is usually conservative enough not to disturb even sensitive livestock: leave filter running, lights either off (if good ambient lighting) or dim, add Prime to treat 2X tank volume at water change, then maybe another dose 12 hours later
It is important to siphon water from lower levels in the tank rather than just taking off the top (yes some physical chemist actually showed that nitrates levels are higher at tank bottom than top, and yes, there was water movement in the experimental setup )

Then after 5-7 days, do a 50% water change - I can still do this with my filter running
If all seems well, you might then consider switching from that daily 25% to 50% every third day, and so on until you’re down to 50% weekly water changes again

If there is significant nitrite present (and must admit I’d use Seachem’s MultiTest Nitrite/Nitrate kit for a more accurate idea of actual levels in tank), you need to consider which is more challenging to the shrimp - bigger water change or more nitrite

Seachem Pristine vs Stability
You must log in or register to reply here.
Similar threads