Hey guys I have a 105 litre planted tank with 7 white cloud minnows and 9 cherry shrimp temp is 18.5c, tank was finished cycling around 2 months ago and fish have been in there about 5 weeks everything has been fine untill Monday for whatever reason the fish seem scared they will not stop hiding under the dragon stone and the only time I see them is when they dart as fast as they can to another rock all 7 are doing this, I 50% water change a week but due to there strange behavior I done an emergency water change with no improvement so another water change on Tuesday still no improvement, its disappointing as I loved watching them so much now I barely see them has anyone experienced this? I'd appreciate your advice

Very strange! I have been keeping white cloud mountain minnows for all my years in the hobby and never had anything like this happen. Could you share some pics of the tank? What happens when you feed?

Its certainly strange. Did you do a waterchange on the day they started acting weird? Maybe add a few more if nothing is wrong with the water?

Ollie s said:
for whatever reason the fish seem scared they will not stop hiding under the dragon stone and the only time I see them is when they dart as fast as they can to another rock all 7 are doing this
Click to expand...

A bit of a strange question, but is it an open-topped tank? and do you have a cat?

Sorry guys I forgot I put this up, so months on iv lost 1 wwcm and moved 3 more due to some gill disease iv tried all medicine I can and can't cure it, I believe what I was experiencing all them months ago was this disease, 4 have lost weight nd some discolouring along with flared gills and some sort of worm hanging out, so I currently have 3 wwcm and 5 gold, all gold seem to be immune as not one has had any symptoms, I'll get some pictures tomorrow
A

Ollie s said:
some sort of worm hanging out
Click to expand...

Picture of this would definitely be helpful - or detailed description

Levamisole medicated food would be my suggested treatment
I suspect the “immune” gold may merely be asymptomatic - some parasites can be very slow to show host infection, example shown below (stole the photo from WetWebmedia) 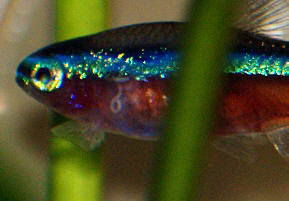 Another issue falling into the category of never-seen-before has cropped up in my 15 gallon tank recently. Inhabitants are 13 Cardinal tetra and 3 Amano shrimp, parameters NH3 - 0, NO2 - 0, NO3 - 10-15 ppm, pH 7.2, KH 3, 28 deg C. From consulting your dichotomous key, I suspect one of the cardinals to have a parasitic worm/fluke/fish louse attached to it (see picture). Being white, not red, leads me to believe it's not an anchor worm.
<I agree. A worm of some sort. Looks like a roundworm (nematode).>
Regarding treatment, I'm thinking a 35g/L salt bath (as per your article on the subject of salt use) OR some kind of commercial medicine.
<Hmm, would try a seawater dip first, as you say. Usually these worms can't reinfect fish in aquaria because of a missing host. Some exceptions, like Camallanus, but worth a shot.>
Can you recommend a course of action? Does the whole tank need treating or just the individual fish?
<Individual fish in terms of dips; otherwise, a standard anti-helminth like Praziquantel or Levamisole for the whole tank.>
Thanks a heap crew.
All the best,
Duncan.
<Cheers, Neale.>
Click to expand...

Unfortunately I am very familiar with this parasite (actually found a paper on something similar awhile back but can’t seem to drag it out from google now)
I’ve only seen it in wild caught fish, but once in a system, it will infect all inhabitants - just that you only begin to see the external worms after 6-12 months (in my case - ie, long enough that I’d thought the treatment successful, at this point I euthanized the remaining fish and stripped the tank)
Dips don’t do anything to this apparently “external” worm as it is encased in a thin, translucent, extremely tough membrane, further the “end” is securely anchored in the muscle wall of the fish, and when I saw only a few external worms, necropsy revealed an infested host with “worms” of various lengths (maturity?) distributed through gill, gut, muscle tissue
I’d naively thought I might remove the external parasites, improving chance of recovery - first shock was the membrane case (which certainly explained why none of the dips or bath treatments had any apparent effect on slowly coiling worms), then the fact I could not remove the parasite without causing considerable damage to the host (anaesthetized) fish (I promptly euthanized this particular fish in order to continue the examination)
A

Despite its appearance (cardinal shown above) this parasite is actually a Dermocystidium sp.
(Note the parasites I isolated from Altum angelfish ranged from a few mm’s to a few cm’s!)


Dermocystidiosis induced by the parasite Dermocystidium sp. in the Paracheirodon axelrodi​

In recent years, organisms belonging to the class Mesomycetozoea have been considered a risk to aquatic and terrestrial animals (Mendoza et al., 2002; Glockling et al., 2013; Blazer et al., 2016). Dermocystidium sp. have been reported as pathogens of skin and gills in fish, resulting in dermocystidiosis that has a high mortality rate (Schäperclaus, 1992; Hassan et al, 2014)
Click to expand...

Dermocystidium is a genus of protist belonging to the Mesomycetozoea and included in the order Dermocystida (Blazer, Hitt, Snyder, Snook, & Adams, 2016; Glockling, Marshall, & Gleason, 2013; Rowley et al., 2013). The genus is characterized by a small spherical spore with a nucleus in the periphery and a prominent refractile body in the centre. Dermocystidium infections have been described in amphibians (Feldman, Winsatt, & Green, 2005; Gonz�alez-Hern�andez et al., 2010; Pascolini et al., 2003), but the majority of the observations concern both freshwater and marine fish infections. There are more than 20 species of Dermocystidium infecting fish (Hassan, Osman, & Mahmoud, 2014). In some cases the parasites were described from farmed fish like Oreochromis niloticus (El-Mansy, 2008), Silurus meridionalis (Zhang & Wang, 2005), Anguilla anguilla (Wooten & McVicar, 1982), while in others they were reported from wild hosts like Perca fluviatilis and Gymnocephalus cernuus (Pekkarinen & Lotman, 2003), Cottus gobio (Feist, Longshaw, Hurrell, & Mander, 2004), and Trichomycterus sp. (Eiras & Silva-Souza, 2000), later is the only report in Brazilian fish. Most of the species are found in the gills, skin and cornea of the eye causing grossly visible cysts of different sizes and shapes, however systemic infections were also observed (El-Mansy, 2008; Hassan et al., 2014), and some cases of mortality were attributed to infection (Hedrick, Friedman, & Modin, 1989; Langenmayer et al., 2015; Olson, Dungan, & Holt, 1991; Olson & Holt, 1995; Zhang & Wang, 2005). The life cycle of Dermocystidium was studied by some authors (Lotman, Pekkarinen, & Kasesalu, 2000; Pekkarinen & Lotman, 2003)
Click to expand...

eSHa NDX is a Levamisole based nematocide.

Aquatoon - Planted CRS Tank
You must log in or register to reply here.
Similar threads