Why are ADA Products so expensive?

Does anyone know if ADA stuff is also cheaper in Thailand?
a1Matt
Click to expand...

ADA's stuff is expensive primarily due to the brand and marketing I feel. He basically developed a whole culture around this hobby. There's also the research and development that is put into the making of all his products, for e.g. the right concentrations of nutrients in a solution. There's no denying the fact that they work.

But if you are perfectly happy with the results of making your own ferts then by all means go ahead. Make your own burger and enjoy it 8)
M

Does anyone know if ADA stuff is also cheaper in Thailand?
a1Matt
Click to expand...

Shadow said:
you will be surprise how cheap it is in Hong Kong
Click to expand...

Does anyone know if ADA stuff is also cheaper in Thailand?
Click to expand...

Any idea on the glassware? Im off there in a few months so I might try pick up a few bits and bobs before I come back.

So I'm currently living in the US and moving back to the UK in June and will be bringing my ADA tank etc with me, unfortunately without the fish / plants etc as its too much hassle with customs.

Would add that in comparisson ADA are also high end here and you dont see tons around but it does look amazing, I'm just glad i can get replacement gear in the UK. I actually want to move up in tank size and was going to buy it here before coming home, think I'll just buy a non ADA tank when im back home.

I'm currently in HK, found a shop on the goldfish market street, that sells ADA.

Drop checker is Â£20/$200 HKD, bottles of brighty etc are Â£8. Think I might be stocking up, I have another 3 days of shopping, after visiting my dad in hosp, and as he is being flown back business class with me, I have a huge baggage allowance. Dunno about transporting lilly pipes though, even in my hand luggage, I'm so clumsy.

The ada seller claims to be only ADA outlet in HK. Dunno.

If anyone is looking to purchase ADA products I highly recommend having a look around eBay and Gumtree before spending big bucks with official retailers, however be aware of fake products and and import fees. There's some amazing deals on the American EBay website and you'd probably kick yourself thinking why you haven't looked there before after looking at the prices. 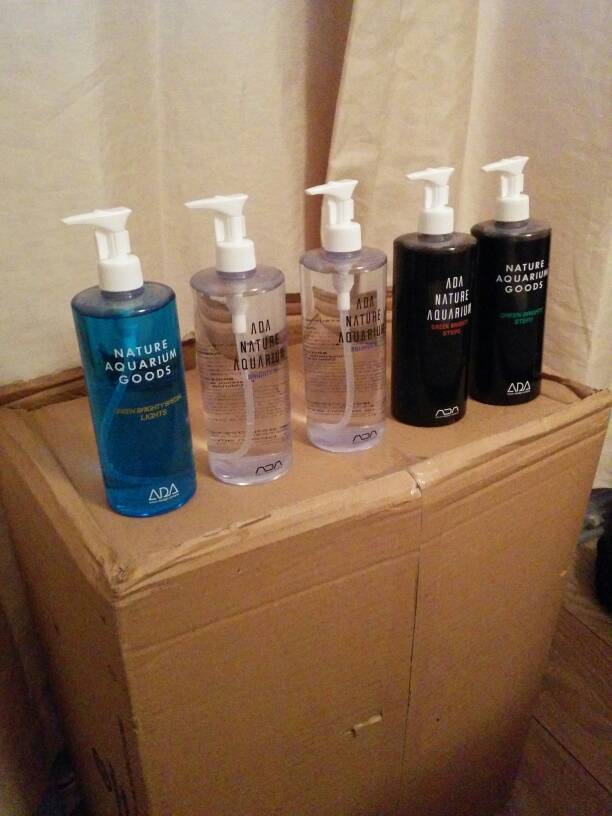 Managed to take them off him all for £85, considering the green machine(TGM) were charging nearly £30 per bottle each at the time. So I asked him why he was selling them for so cheap and he explained that back in Hong Kong they're going for much cheap and that the competition between retailers is crazy not to mention there's no VAT in Hong Kong anyway and he managed to stuff a few bottles in his baggage. Lol 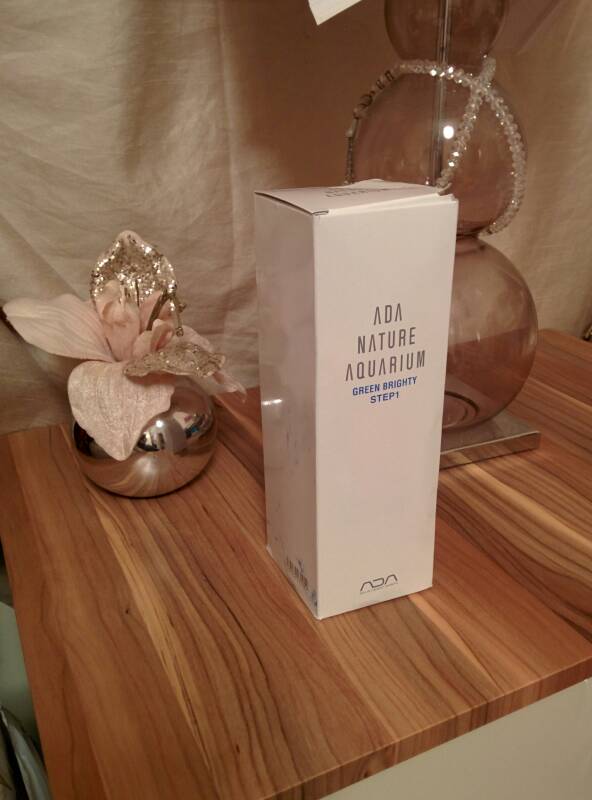 So since I purchased all the bottles above I may as well have picked up a 500ml bottle of Step 1. So I did and like I mentioned above i got it off the American eBay site for $27 which turned out to be £17

Everything all legit of course...allergic to the counterfeit

And it gets better... There's been some recent updates on ADA prices... 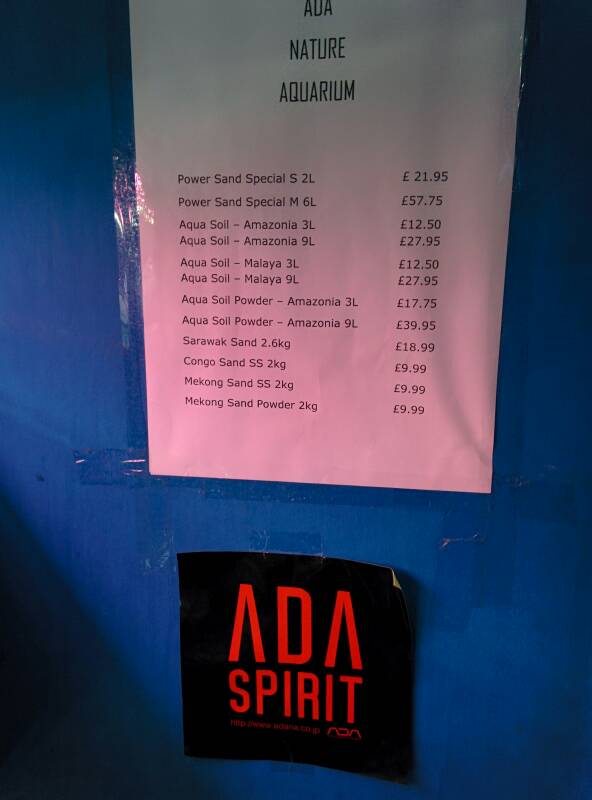 So I just got sucked back in to the hobby again and thought I'd have a quick browse around TGM website since I've been looking for updates on the release of the new 2014 Book of ADA for while. And the first thing I noticed on their homepage is a drop in price of the ADA liquid ferts and Aqua soil and it wasn't just the ferts and soil it was all ADA products! So I decided to head down to the Aquatic Design Centre to pick up the book and had noticed the sign above. So i asked Greg why they've dropped in price and he told me that the importing tax fees for ADA has dropped quite a bit allowing it to be sold quite a bit cheaper.

Dude, sorry to ruin your world. You have just paid 85£ for some water!
To many to count...

Piece-of-fish said:
Dude, sorry to ruin your world. You have just paid 85£ for some water!
Click to expand...

Don't worry you haven't.
I understand why you feel 85 pounds is quite expensive for bottles of liquid fertiliser than cheaper E.I dosing methods which is what your probably using and there's nothing wrong with that. But it's this liquid fertiliser that quite a lot if not most of the aquascapers around the globe are using in their tanks to compete in the IAPLC. I have nothing against E.I dosing maybe i will use it some day myself, but if it's this fertiliser that you call "water" that is going towards producing world class scapes I want to use it too.
J

Im sorry to say piece of fish is right, its mostly water. People buy it because the hobby has been mistifyed through the years. The true success behind those great aquascapes is mainly the soil which is very rich in nutrients.
they dont have nothing special in them its just water and a few chemical salts.

but hey its your money and the main thing is for you to be happy with the product.

its interesting how the best aquascapes are from asia and it seems like the technical part of the hobby there seems to be a bit unknown. They just apply adas techniques, hard work and originality and thats it really, no need to know the science of it all.
Last edited: 18 Dec 2014

Jose said:
Im sorry to say piece of fish is right, its mostly water. People buy it because the hobby has been mistifyed through the years. The true success behind those great aquascapes is mainly the soil which is very rich in nutrients.
they dont have nothing special in them its just water and a few chemical salts.

but hey its your money and the main thing is for you to be happy with the product.

its interesting how the best aquascapes are from asia and it seems like the technical part of the hobby there seems to be a bit unknown. They just apply adas techniques, hard work and originality and thats it really, no need to know the science of it all.
Click to expand...

I do agree with both of you to some extent but it's E.I at the end of the day, its estimated so you can end up with an overpowering or weak mixture and I prefer consistency. With ADA dosages they give you more time between maintenances. But on the other hand ADA had to start somewhere to get their fertilisers right, so estimations and trial and error does play a role there.
I'll definitely look into this further.

Has Amano himself registered on UKAPS undercover?
To many to count...

Piece-of-fish said:
Has Amano himself registered on UKAPS undercover?
Click to expand...

I want to cry at the thought of spending so much on ferts and substrates. These products won't necessarily help you to make world class scapes just because they are branded.

Look at Tom Barr's 120 Gallon, his scape and plant health amazes me and he uses EI, CO2 etc His aquarium gives me a very nice modern feeling with all the colours and tones. http://www.ukaps.org/forum/threads/dutch-something-or-the-other-120-gal.17797/

Turn to BigTom's 'Poco Pozo' http://www.ukaps.org/forum/threads/toms-poco-pozo.33301/page-11#post-379902 and his retired 'Bucket O' Mud' http://www.ukaps.org/forum/threads/toms-bucket-o-mud-the-end.14521/ You can see his great success using a very cost effective and minimal approach with his methods in creating what I believe are one of the best tanks on the forum and I am sure many will agree.

I am not trying to bash ADA's products, don't get me wrong. The point I am trying to make is that you don't need to reply on specific products in order to achieve success. You can use cheaper and cost effective products and still be able to make a scape that is appreciated by many people. All you need to do is understand what plants will suit your needs and how to grow them successfully in your environment as seen in Tom Barr and BigTom's aquariums who used two different methods but still achieving many scapers and members' praise on the forum. It is all down to their knowledge and not any specific branded products and what have you.
Not the best looking aquariums as I'm still a novice in keeping aquatic plants but I hope yous can follow my progress,
cheers,
Michael.
Low Tech 30L Betta aquarium
Low Tech 30L Shrimp aquarium
Orchids

Molecules are molecules, ADA branded or not, mixed with more or less water, sold my Amano or whoever... Sorry but thinking that a product will make your tank look better is most of the times a big mistake. My guess is that a 90% of a tank depends on the owner planning and management. We all actually use the same equipment with non significant differences regarding quality and the results are really different.
I use basically the same equipment Tom Barr, Amano and IAPLC winners but my tanks are really crappy

I'm going to change my name. Definitely Tom, yeah I think it's the secret

Lol. Quite a fun thread this is. ActuallyI dont think there are any secrets any more at least to get a gorgeous tank. its like painting, you got to have an eye for detail and spend time with your tank but no tricks nope. Another thing is that ammano uses excess nutrients from the soil as well, not only Tom Barr. If you think of it plants can only have an excess or a lack of nutrients. The line for perfect nutrients is very fine and I dont think none of us are at it at any given time.
The aintenance is all about light levels. Tom Barr goes a month without changing the water in some of his tanks. I believe Amano changes 30% once a week which still a chore.
You must log in or register to reply here.

Update on my ADA 60p