Quick update...I only have 15 or so Rasboras left, that's about half of what I started with. But the rest seem healthy and have coloured up nicely.

The tank has been a bit neglected and needs a serious trim before the carpet starts to lift and the moss blots out the light. I haven't shown any photos pre-trim before, always forgot. So here they are... 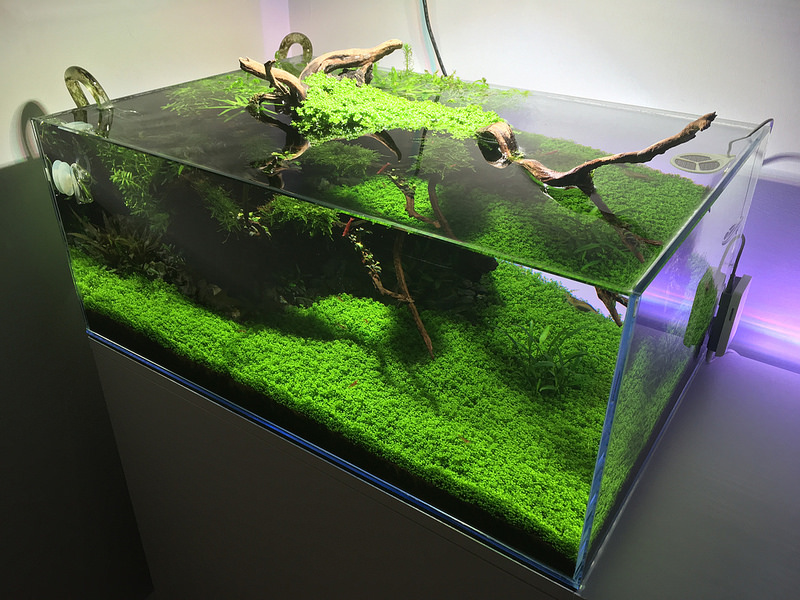 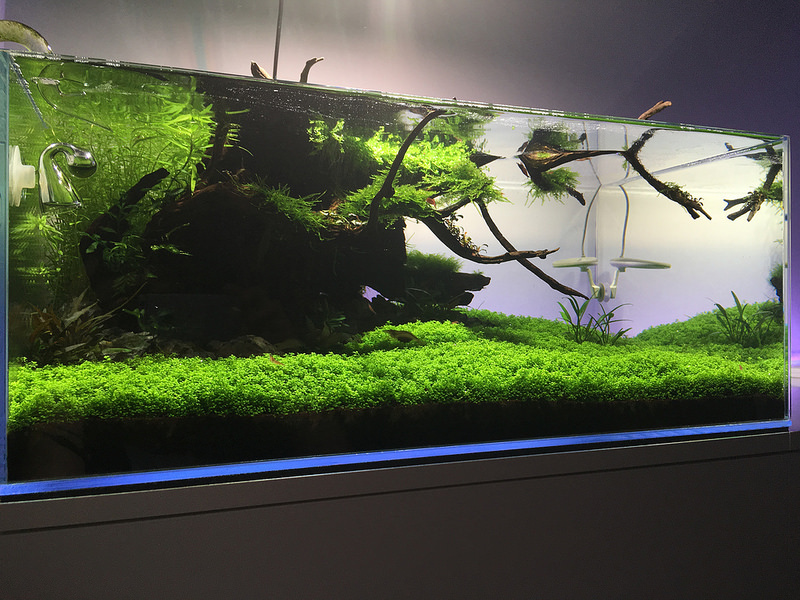 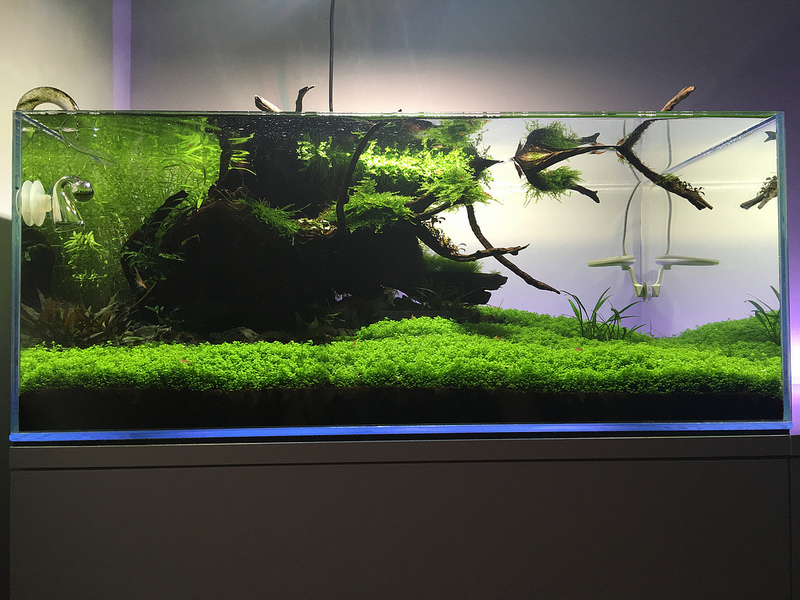 Last edited: 15 Sep 2016
.
Aquazeitgeist. YouTube
A Brief and Incomplete History of Aquascaping. Soil Substrate Planted Tank - A How to Guide
Schism Reimagined. NatureScape. Return of the Shallow. Windswept Eternity, Primordial. The Dark Side or What Lurks Beneath

It looks very lush and full! I actually quite like the carpet like that, perhaps a trim near the front to slowly get higher and higher (fake slopes? =D?). Your carpet was the main reason I chose to go back to monte carlo in my 90cm!
Tank Journal: ADA 60P + Do!Aqua MiniM
[SOLD] Tank Journal: 90x36x30cm (25G/90L) - Custom Tank
Facebook: Nature Aquarium Vancouver

.Sorry about the fish .
Neil
A

This is such a lovely tank - so glad you persevered

Commiserations on the fish losses

@Doubu, thanks. I like the carpet like this too, but I'm concerned if I leave it any longer it may start to die underneath and lift from the substrate. Although, TBH this is my first HC carpet so I'm not sure what I can get away with

@Nelson, thanks Neil, healthy neglect usually works for me once the plant biomass has reached a critical point.
The Fish, I'm a little disappointed, probably some wasting disease like TB, I can't remember last when I had a batch of fish without loosing at least a few individuals.
Coincidentally, I walked in to the study this morning to find one of my two remaining otos on the floor as well...

@alto, Thanks also, maybe I'll leave the carpet a little longer and keep a close eye on it, see if I can push the boundaries a little
.
Aquazeitgeist. YouTube
A Brief and Incomplete History of Aquascaping. Soil Substrate Planted Tank - A How to Guide
Schism Reimagined. NatureScape. Return of the Shallow. Windswept Eternity, Primordial. The Dark Side or What Lurks Beneath

That looks superb Tim, tank shape and plant health is spot on!

Sorry about your fish Tim I guess micro rasboras are so tiny & delicate - it leaves them quire vulnerable to disease. I'm sure if my tank didn't have a lid/hood all my Ottos wouldn't be present either! Obe of my fave journals as started reading whilst still lurking/ new member on ukaps so lovely to see the tank progressing in 'real time' for me ☺

That looks realy awsome Tim.. It would hurt me to trim that.. But it's indeed something necessary... Also the emersed growth looks terific on this tank..

Sorry for the rasboras, i'm in the same boat here, started with 32 of which are only 8 left. But these 8 keep on going strong for a while now, not lost any more for the last few months.. I guess it's keep adding till we got a steady and healthy population.
Cheers,
Marcel..
Tanks for watching.

@Aqua360, thanks, I seemed to have found the right balance...I did push the envelope for a couple of weeks, or so, by upping the photoperiod etc, but I started to get algae creeping in, so I restored it to the original parameters and all has recovered well...if it ain't broke don't fix it

@Manisha, thanks that's a really nice comment, and I've tried to show warts 'a' all in real time, although it doesn't always make good viewing

@zozo, thanks Marcel...It did...that is hurt me too. I started trimming the stems, and then the moss, and then thought...what the heck I may as well go for it.
So nearly 2 hours later the whole scape has had a very short back and sides
I'll post some pics later after it gets dark - I get too much reflection otherwise even with the blind down.

As for the fish...it seems to me that at least around here, and in MK where I used to live, it's become a serious problem.
I think maybe breeders and LFS could perhaps do a little more to stamp out these kind of diseases.

I think maybe this scape has another couple of trims/months in it then I'll try to get some half decent images without the equipment in (hard with just an iPhone) and strip it down.
I've got my eye on a new tank, but don't have the space or time for MTS
Last edited: 15 Sep 2016
.
Aquazeitgeist. YouTube
A Brief and Incomplete History of Aquascaping. Soil Substrate Planted Tank - A How to Guide
Schism Reimagined. NatureScape. Return of the Shallow. Windswept Eternity, Primordial. The Dark Side or What Lurks Beneath

Tim Harrison said:
I think maybe breeders and LFS could perhaps do a little more to stamp out these kind of diseases.
Click to expand...

I believe i mentioned it before, if they are already pale in the LFS, leave them be and let them die and or recuperate there.. I've seen them in the LFS in ful ornate color, so there is no other excuse for them to be pale if not sick or heavily stressed.. I never buy a pale rasbora again with the silly excuse they color back up if fed with the right food. I might would kept believing that if i haven't seen them vibrantly healthy in an other store.

I guess these little fellows became rather very popular since the nano era is.. I can give them a break that it's not easy to sellectively catch these mini's and only distribute the realy healthy ones. It's up to us, to know when not the buy them, the seller only wants to make easy money and 99% of the customers wont take no for an answer and vist the other store if they get a no... Same story with the oto's, don't buy freshly arrived oto's from the lfs they tend to die off easily if stressed to much. Those rasboras are obviously susceptible to that too..
Cheers,
Marcel..
Tanks for watching.

Yeah, I agree totally, it's 101 livestock buying.
The LFSs I've bought from in the past have often been very responsible and will not sell fish if they think there is anything wrong with them. Or if they've just received them, kept them in quarantine for a while.
But wasting diseases like TB are insidious, and some fish maybe carriers, so it won't always be necessarily obvious the disease is present until the other fish start to show symptoms.
More worrying is...apparently the disease is zoonotic.
So I guess what I mean is more could be done to control the disease at source.
Last edited: 15 Sep 2016
.
Aquazeitgeist. YouTube
A Brief and Incomplete History of Aquascaping. Soil Substrate Planted Tank - A How to Guide
Schism Reimagined. NatureScape. Return of the Shallow. Windswept Eternity, Primordial. The Dark Side or What Lurks Beneath

Tim Harrison said:
More worrying is...apparently the disease is zoonotic.
So I guess what I mean is more could be done to control the disease at source.
Click to expand...

True.A member of another forum I use to post on,got infected through a cut on the hand.
Tank is looking lush mate.Worth the effort.

I didn't know that one..

stu_ said:
True.A member of another forum I use to post on,got infected through a cut on the hand.
Click to expand...

Especialy with TB i've seen some reports stating it's mutating and strains are found resistant against know treatments.

And the LFS is possibly spreading it uncontrolled to urn a penny on a 16mm sized fish? That's rather alarming.. Nice twist to the hobby..
Cheers,
Marcel..
Tanks for watching.

Who would have thought that such a passive hobby could be so fraught with danger...who needs rock climbing and skydiving
.
Aquazeitgeist. YouTube
A Brief and Incomplete History of Aquascaping. Soil Substrate Planted Tank - A How to Guide
Schism Reimagined. NatureScape. Return of the Shallow. Windswept Eternity, Primordial. The Dark Side or What Lurks Beneath

Tim Harrison said:
Who would have thought that such a passive hobby could be so fraught with danger...who needs rock climbing and skydiving
Click to expand...

I still got an very old NoFear hat from my skateboarding days.. Never tought this hobby would give me a reason to wear that one again when cleaning the tank.
Cheers,
Marcel..
Tanks for watching.

Ahhh it's a Cuba carpet! This entire time I thought it was Monte Carlo? My bad. I noticed with my Rasboras that they always get em at the LFS really skinny. They're never quite healthy and it's pretty consistent every time across the board. I figured that I have to overfeed to fatten them up which has worked quite well - if they start eating they tend to live! Baby brine shrimp does the trick for me. They're timid so I put it in and run back, it also floats in the water column so they have enough time to still see it.

Won't let me edit my above post for some reason... I thought I had asked you a while back if you had to trim it all the time to keep it so low? I wonder which carpet I got myself confused with (many beautiful tanks on UKAPS). Maybe I'm just confusing myself haha. At work now so it's easier to type - but I also forgot to mention that I think you made great plant selections to go with the Cuba (which needs highlighting that can often times cause issues...)!
Tank Journal: ADA 60P + Do!Aqua MiniM
[SOLD] Tank Journal: 90x36x30cm (25G/90L) - Custom Tank
Facebook: Nature Aquarium Vancouver

@Doubu, I've been feeding mine frozen cyclops, that seems to do the trick as well
And thanks I chose the plants to try and keep a sense of perspective, that is make the tank look much bigger than it really is...I guess it must have worked if you mistook HC for MC
.
Aquazeitgeist. YouTube
A Brief and Incomplete History of Aquascaping. Soil Substrate Planted Tank - A How to Guide
Schism Reimagined. NatureScape. Return of the Shallow. Windswept Eternity, Primordial. The Dark Side or What Lurks Beneath

This is a great scape Tim, I really like the dark areas contrast with the open area of the hc carpet, is that hc growing emersed on the top branches ? Any plans to add more plants to that area ? The hc will make a great planting medium for various other plants.
About time 90x45x45
MiniMal / few scapes in one place
Low tech

I agree with Tim, you can try some staurogyne repens beetween Wood and hc carpet to add some depth.