After several months experiencing all the joys that the planted tank brings, time has come to upgrade the size. I've decided to go from 60 to a whopping 90 liters! I know it's not much by any means but I needed to be reasonable. I'm renting my place and an inevitable future moving would be much more difficult with a bigger tank. I also perform all my water changes manually with a bucket and although I'm young, beautiful and strong, having to hold the bucket high and be careful not to spill anything can sometimes be a pain in the… shoulder.

Despite not having any prior woodworking experience, or tools for that matter, I built my own stand. I learned many things during the process. I learned that I can't cut very straight. I learned that tools are expensive and I learned that my girlfriend loves me tons. Believe it or not, I was allowed to work on it in our living room because the weather outside was unreasonable. I always cleaned after myself but there were many tools and timber hanging around for a couple of weeks. Totally worth it, here's the result: 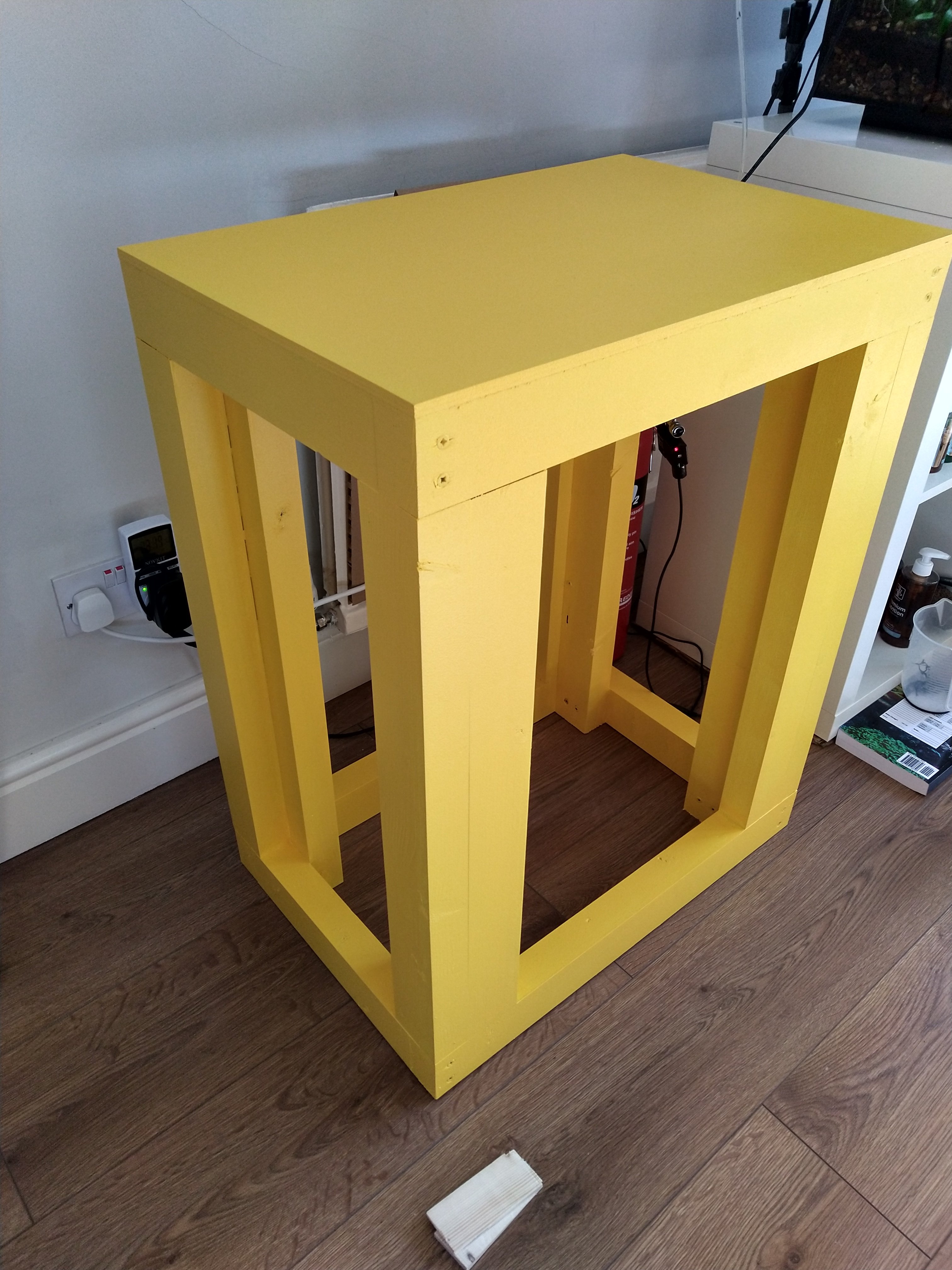 It's not perfect but it's mine, very stable and yellow! I used 44 x 69 mm whitewood, Base dimensions are 60 x 40 cm. The design is very simple and can be easily found on YouTube.

Leveling was not as easy as one would expect. I had to raise three corners by 4, 12, and 14 mm. That’s more than half an inch on one side. Color me pedantic but that’s one hell of a crooked floor. After initial attempts of making wedges out of wood, I resorted to simply using layers of cardboard taped to the floor with masking tape. I don’t think this solution will last forever but it’s good enough for now.

After all this hard work, it was time for some serious hardscape fun! I took my time and tried several layouts. My initial idea was to create an island on the left side of the tank and have the right side heavily planted. I tried to build this in the tank but I had to abandon this idea. Due to the size of the pebbles used, the created space for soil was inadequate in my humble opinion. See for yourself, what do you think?

Many days and unsatisfying variations later, I created the following monstrosity. I liked it a lot but mainly for the comical value. It had a funny looking cave and overall cartoony feel. I left it on for three days to see if I could live with it long term. I could not.

Then, I got an idea. Instead of abandoning the island plan, I could just revert it - create an absence of an island and have plenty of space for the soil around. That’s how my final layout came to be.

As you can see, it’s not gonna win any aquascaping contests, it’s not gonna get anywhere close but it will be a nice little home for dum-dums (collective name for my 5 ember tetras) and other fish in the future. They’ll have plenty of spaces to hide from the flow and plenty of plants to admire, smell, claim as their territory or whatever they fancy to do.

Here’s how it currently looks. It's been a few days since I planted it. I’m getting a lot of algae but I like the look of it and it’s part of the plan. I want to keep a group of otocinclus catfish later on so I’m “cooking” a welcome feast for them. Please don’t mind the CO2 being too close to the radiator, it’s not heating. 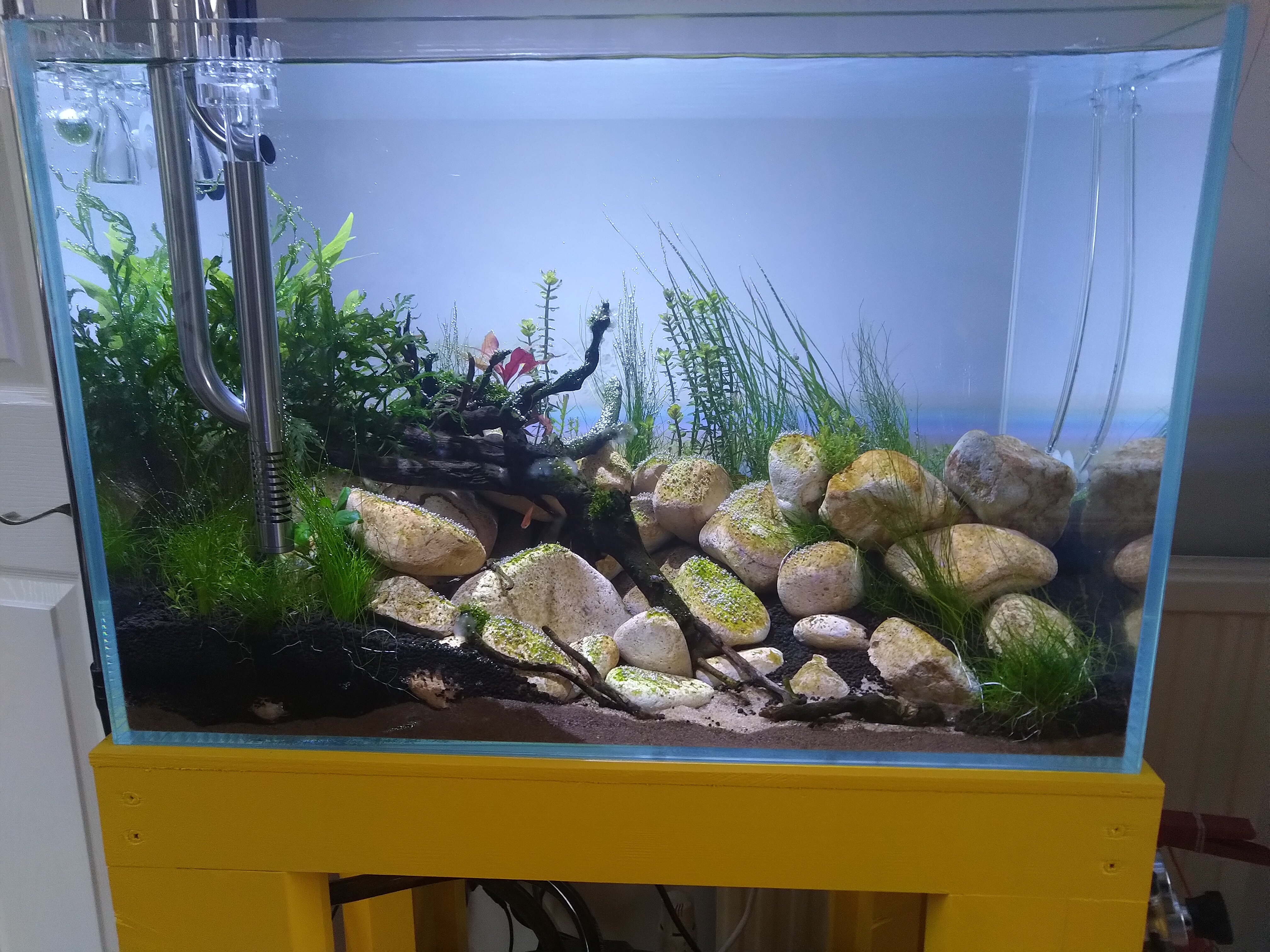 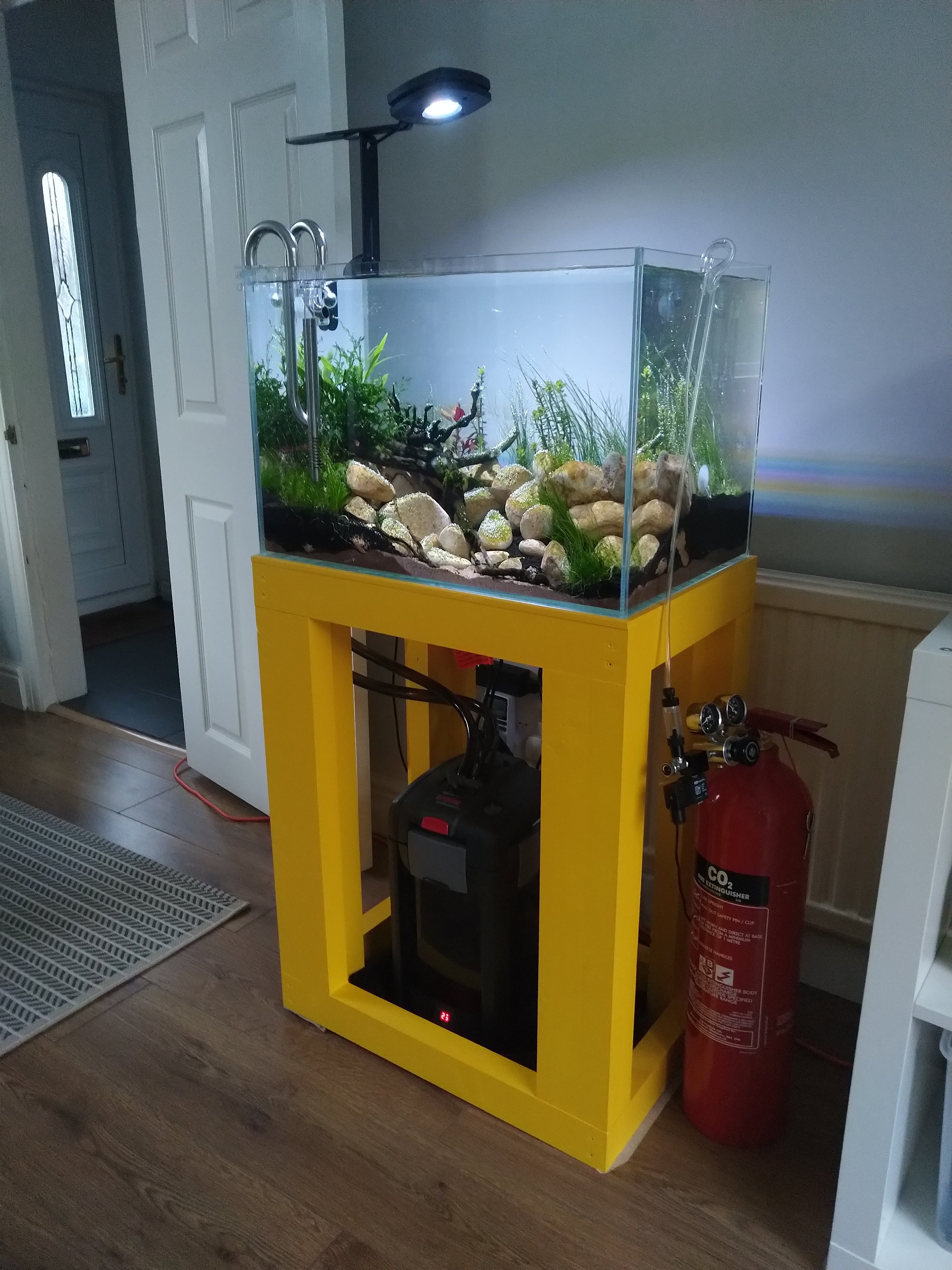 Otocinclus delivery is being delayed, the seller is looking for a new shipping company. The welcome snack I’ve been prepping for them was getting out of hands so I went inside the tank with my toothbrush (a dedicated fish tank toothbrush). As I was scraping diatoms of rocks, wood and plants, I was having the time of my life. Any sort of cleaning in my life has never felt this satisfying. And then it striked me - am I getting old? There are other signs like a bit of gray hair and tiny wrinkles but that’s just from stress and too much smiling. Please correct me if I’m wrong but I bet enjoying maintenance is definitely a getting wise tell.

Anyhow, I added bits of trident fern, tiger lily bulb, removed some rocks that were totally out of place - what was I thinking?

I installed an inline CO2art diffuser and am trying (not too hard) to dial the CO2 levels in. The diffuser seems to work well but I think the jet outflow is unnecessarily harsh so I ordered a glass lily which will hopefully work better. Now I have to patiently wait for it on top of waiting bunch of oto-cuties. In related news, pogostemon erectus is taking forever to grow.

This is how the tank looks now, please excuse the glare and the floating plants, they’re intended for a new tank that's in progress. What do you think? 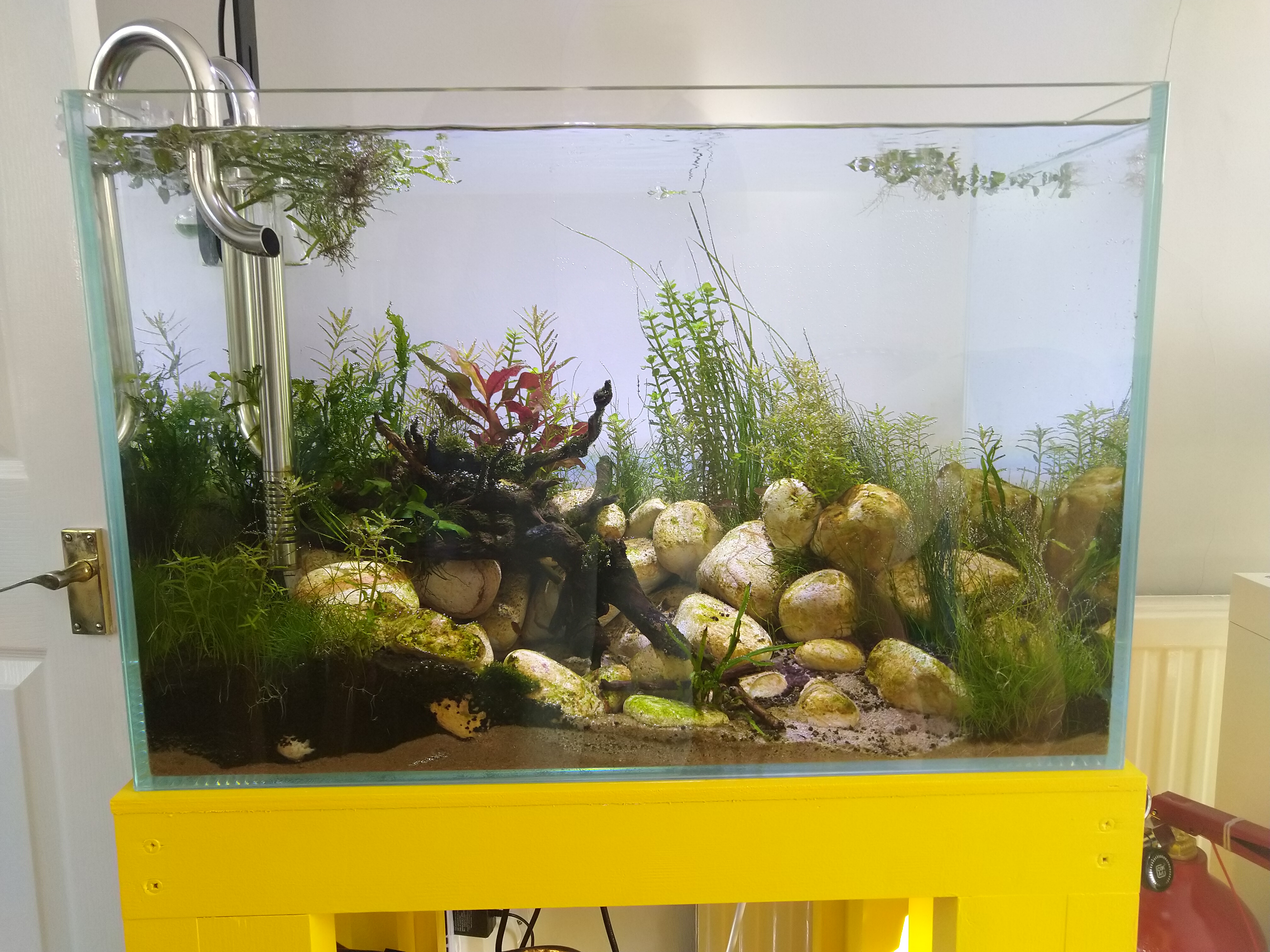 Emil. said:
And then it striked me - am I getting old? There are other signs like a bit of gray hair and tiny wrinkles but that’s just from stress and too much smiling. Please correct me if I’m wrong but I bet enjoying maintenance is definitely a getting wise tell.
Click to expand...

Probably
If you have a favourite spatula, then definitely!

Hi, this would make a great tank to go the Asian route and stock with hillstream loaches and some small danios like Danio Tinwini.

I really like it. The stand is cool, it's nice to see something a bit different
ADA60P - Edge of the forest

I am very bad at writing updates, and "forum-ing" in general, apologies. So much has happened since my first post and I've learned many things Here's a more recent photo of my tank: 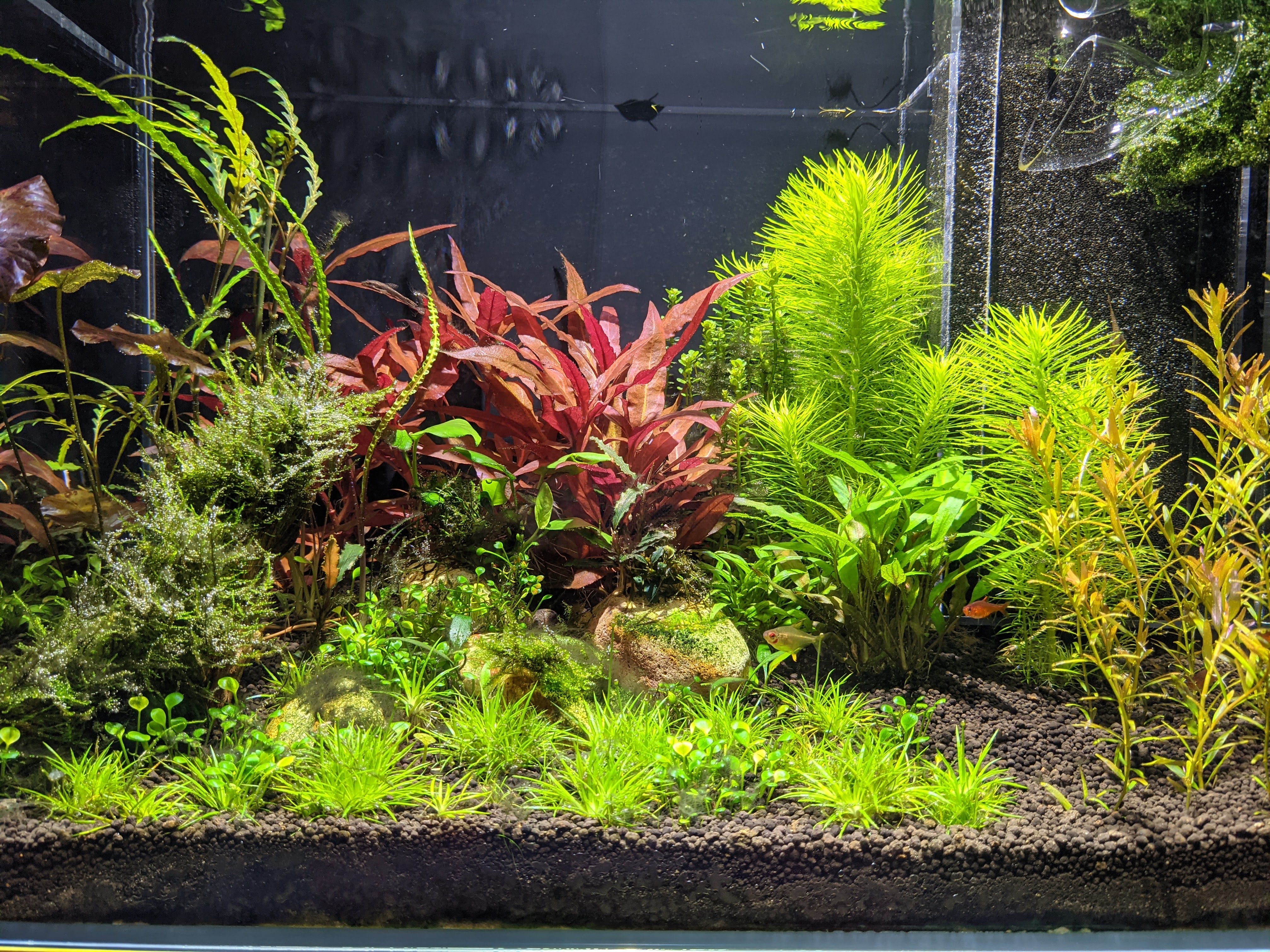 Some of my biggest findings:

1) Plants need light - duh!
- I'm one of those people who like to read and research as much as possible. This, while smart approach, can give you a false sense of expertise. After reading so many stories about lights being too strong on this forum, I went down the rabbit hole of making things worse and worse for me by constantly lowering it. 13W on AI Prime Freshwater hanged 30cm above the tank simply isn't enough (that's the low I reached when it finally struck me). For some reason the air between surface and light was an equivalent of vacuum in my mind. Do the math for your light and/or find out what works for others and start from there. I didn't have any useful reference point as the light was new. I started in the middle and went down and down with the wattage. Balancing things out is difficult without experience. My light went from being okay to seriously bad which made any other attempts (co2, o2, more mature filtration, fertilization) useless.

2) Lemon Tetras jump
- Sadly I had 2 jumpers and 2 fish stuck behind a sponge. I believe all accidents were flow related. I moved the pipes around and now there's no longer a strong current that can corner them. No accidents since but I've ordered a dd jump-guard regardless because it makes me quite uneasy to watch them when they're establishing their pecking order. I found that one female in particular, especially when she's ready to breed, can be quite territorial. I saw them do it twice. Once inside pogostemon erectus and once on top of java moss.

3) CO2 dialing depends heavily on surface
- With an air stone constantly breaking the surface, I was unable to get enough CO2 in. With no surface movement, it's too easy to pump in too much. Surface skimmer on the inflow works well for me.
- Important observation: surface scum was unable to penetrate the sponge in my pre-filter. I had to cut out a bypass on top.

3) Algae is just an indicator, not a problem
- When I spotted bits of BBA on the rocks, I went to a full panic mode and started adjusting everything. Lowering the light and adding fully cycled sponge filter got rid of the bba but things went downhill from there. After adding new batch of fresh aquasoil (shrimp king), I experienced hair algae boom. I've been fighting it for months now. Things are getting better and I'm no longer scared of algae. Healthy new growth is not affected, some plants are doing better than others but overall things are getting better. Alga is not a monster that's gonna eat you alive despite of what the internet wants you to believe. I doesn't even look that bad. Worry about plants, not algae.

4) Healthy plants look different
- Yet another obvious thing that I had to learn on my own. I now know what poor rotala looks like. I now know how poor pogestemon looses leaves all over the tank. I know how much abuse they all can take and still recover given good conditions and enough time.

Most of these points are obvious and I read about them numerous times but now everything finally starts to click together!
You must log in or register to reply here.
Similar threads