Your Opinion please on adding RCS to a CRS tank

Hello
I did a spot check on my fish tank today and in particular the internal Juwel filter. The reason I check the filter is because I normally find a cherry shrimp in there.

To my surprise I found 2 quite small Cherry Shrimp in the filter. So I am guess someone has been a bit busy!!!

I don't normally see the RCS in the fish tank. I introduced them to the fish tank many many months ago and never saw them again, apart from one occasionally in the filter once a month.

So the questions are:-

Cheers in advance for any advice.

Good question roly. I shall await an expert answer. I have cherries and rilis and fish. I'm planning to get rid of some of my fish to accommodate some beautiful crs. I can't see me managing to catch every cherry before I go crs cbs so theyl have to stay. Your shrimp shouldn't be hiding unless you have mouths around the tank that theyl Fit into. Ours are always out and about even the babies don't hide from the fish.
A good turn never goes Un-punished. I opologise in advance as I will ruin your thread.
M

You can mix the two without worrying about them mating because CRS is Cardinia and RCS is Neocardina or fighting and RCS are hard to kill so you need not worry about the use of RO water. You can take the RCS away from the fish tank if you yourself feel bad about leaving them to their own and risking being eaten by fish. But if they have survived since your introduction from months ago maybe they're able to find hiding places and food to live peacefully.

One problem which you may find with adding RCS is that they will compete for food with the CRS in the long term, due to their ability to multiply being easier than the CRS I feel that the Cherries could over run the tank which may pose a threat to the CRS population in the long run. People also often find that shrimps will less likely to breed in an over populated tank, this goes for both CRS and RCS so if you have success in breeding both species you may have to find that you will have to constantly re-home the shrimps to keep them breeding at a steady rate which can be a hassle.

It can get distracting if you have both shrimps in the tank, but its likely that it will be the CRS who will steal the spotlight, and if that is the case I myself wouldn't worry about aesthetics but more about the above.
Not the best looking aquariums as I'm still a novice in keeping aquatic plants but I hope yous can follow my progress,
cheers,
Michael.
Low Tech 30L Betta aquarium
Low Tech 30L Shrimp aquarium
Orchids

Michael
Thank you also. I think I might be swaying to keeping them in the fish tank and leaving the CRS in their own tank. I have done well so far in looking after them so I dont want to disturb the equilibrium.
Cheers
R
The Fish Tank
Journal:- - My First Ever Aquarium Juwel Rio 180,

I had some sakuras in with my crs and they very slowly all died off. Could have been low tds, low ph, don't know but they didn't like the tank.
Cheers, Lindy

Rolymo, I think your heading for another shrimp nano for what it's worth ime neocardinias and cardinas can be kept in the same tanks but ultimately 1 species won't be happy.
About time 90x45x45
MiniMal / few scapes in one place
Low tech

Nathaniel I would love to get a new tank.

When I recently ran this fella past my wife suggesting a new tank for it, the responsive was a quick, decisive and ultimately doom laden one. "Over my dead body" 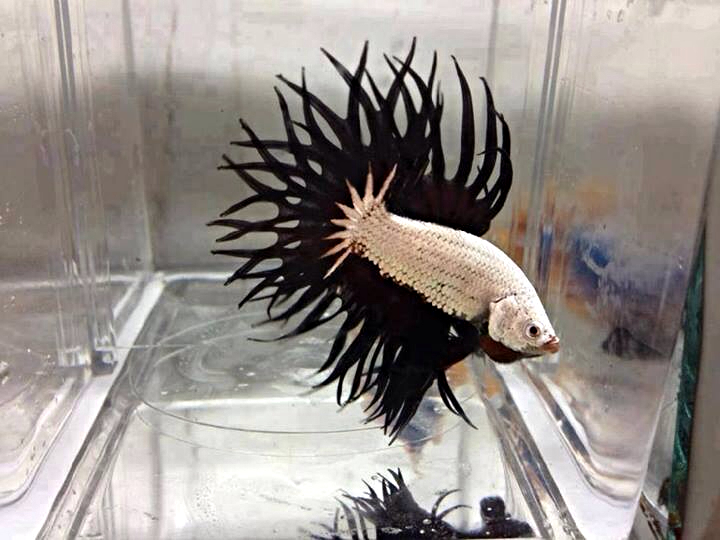 So does that mean I can't have another shrimp tank might result in some harsher words that the current shrimp night get offended by.

I could always get the girls to start begging on my behalf.
The Fish Tank
Journal:- - My First Ever Aquarium Juwel Rio 180,

My missus said over my dead body once, I told her I'd use the coffin as a cabinet for a few small tanks

I used have a fair bit to do with Splendens, one like that would be about £30 plus postage if you bought from a seller here or less if you were to find it on aquabid and sort out trans shipping etc...
Ben

A seller on ebay occasionaly has bettas like that. You just have to keep checking.
Cheers, Lindy