A few weeks ago I took the plunge and stripped out my 3ft planted tank in order to try the low tech el naturel style tank as advocated by Diana Walstead. The fish, a guppy, bristlenose plec and a few otto's and a load of plants went into an old unused 2ft tank while I stripped out the main 3ft tank. Loads of plants and gravel that were covered in algae were thrown away.
I had recently bought a nutrafin yeast CO2 system which worked very well, the extra CO2 seemed to kick start the growth of the existing plants and halt the rather rampant growth of green filamentous algae.

Into the now bare 3ft tank went about a bucket full of John Innes seed compost - enough for a 1" layer and over that went 1-1.5" of the original substrate complete with the mulm that had built over years. The gravel/substrate is an inert baked clay substrate called terra decor which I bought in the mid 90's. I filled the tank about 3/4 with tap water and left it overnight unheated and unfiltered. The next day i syphoned off the water and refilled it with a mixture of the old tank water, tap water and and some rain water (about 1/5 rain water). I then left the tank overnight again filtered and heated to get the tank back up to temp. The following day I replanted with
vallis,
cryptocornes (wendtii I think) java fern,
anubias nana,
pogostemon helferi and
riccia

This is a picture of the tank a few days later - CO2 diffuser is still present but I did not refill the yeast reactor so no C02. 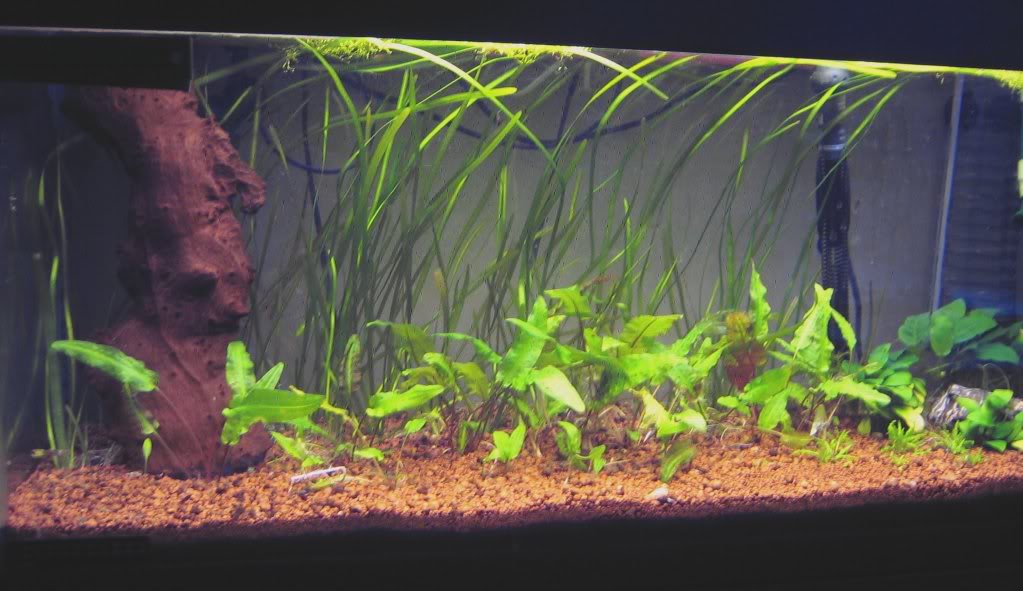 About a week or so later with a few extra plants (ordered 25 aquarium plants from ebay) some golden barbs and some more bristlenose plecs from Adam. 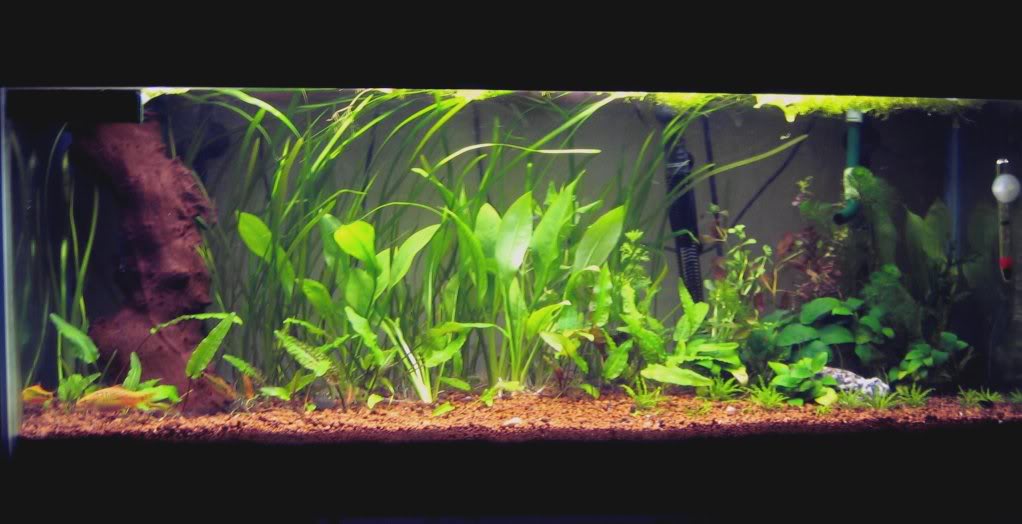 Some of the stem plants I recieved did not do so well the Limnophila sessiliflora seemed to melt and alot of the Ludwigia leaves snapped off. I also moved a few plants around.

Here's a picture from today (14 Aug). The vallis has grown well and there is little if any algae so have removed the algae scraper from the glass.

Not everthing is going well, when I moved the sword plants around I noticed alot of the original roots seemed to melt although there was also some newer stronger looking root growth and most of the leaves seemed to melt 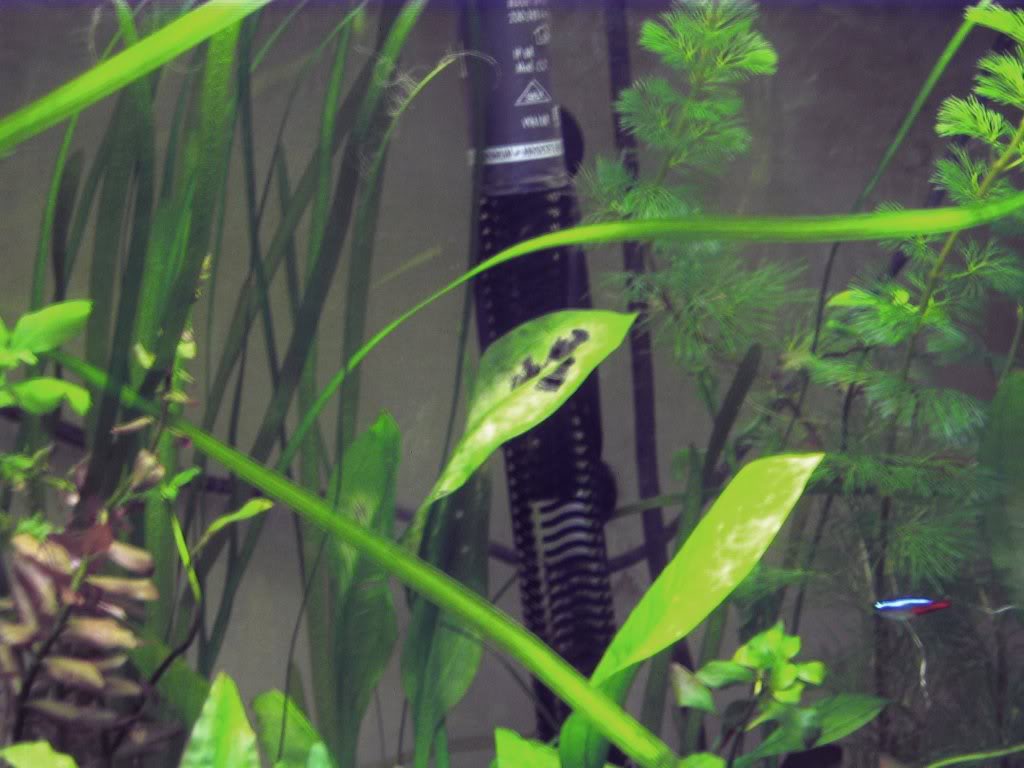 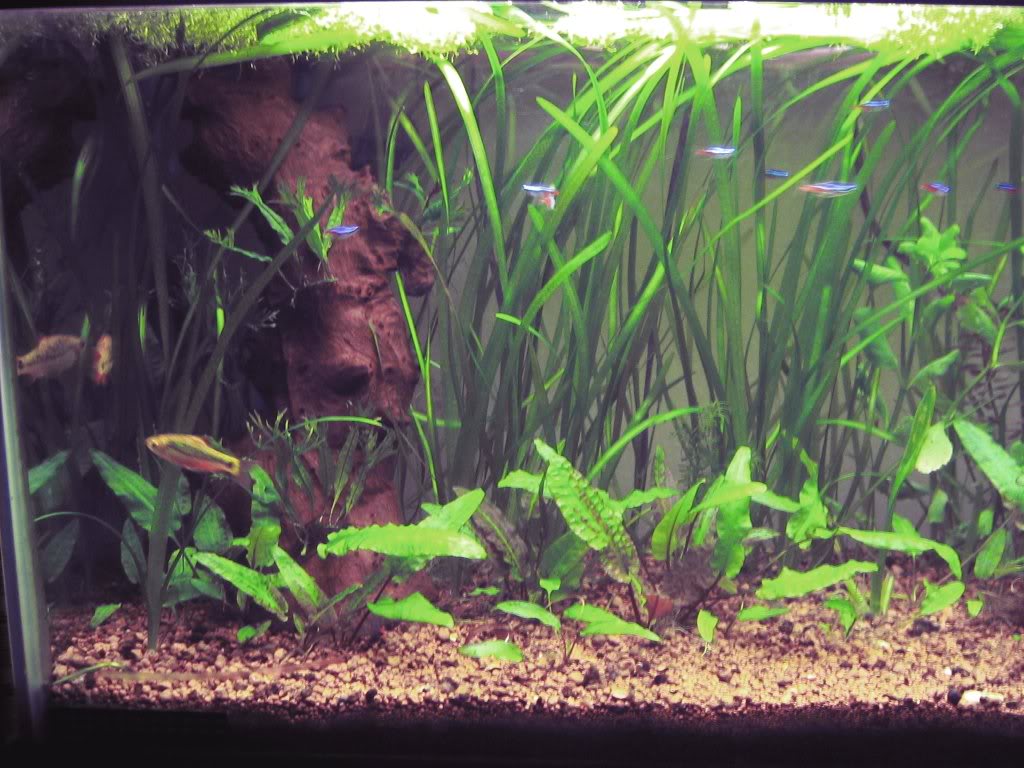 In terms of maintenance I've cleaned the external eheim ecco filter once because it got clogged up and the water flow went down. There is no added CO2 and no added ferts only fish food - 2 generous helpings of flake per day and some algae tabs most nights for the plecs. I haven't done a water change other than a small one when cleaning the filter and don't plan on doing one till about christmass.
There are 2 tubes, one a Sun-glo on for 10 hrs a day and an Interpet triton on for 8hrs a day. Both are old tubes which is why the pictures are a bit dim.

There has been little or no algae so far, occassionly some filamentous algae but it doesn't seem to last.
In the past I would not have dared feed this much food and would have expected there to have been an algae bloom with the plant die off (which I did not remove this time around) but the fish and the snails seem to like it.
el Naturel set up
A

I think the right hand side is off to a good start, not sure aboiut theleft though
Aaron North
My Flickr Account | Equipment needed for setting up an FE | Algae & Nutrients

Looks good. It will be interesting to see how this goes, not many people do the natural way these days. The crypt looks a bit like C. affinis as it's quite bulleted(bullated?). Does it have a pink underside?

I assume you have Diana's book? Was it your inspiration?

In the past week or so I have noticed what appears to be a flower stalk comming from one of the clumps of anubias nana. I have never had plants flower before so not quite sure what it is. 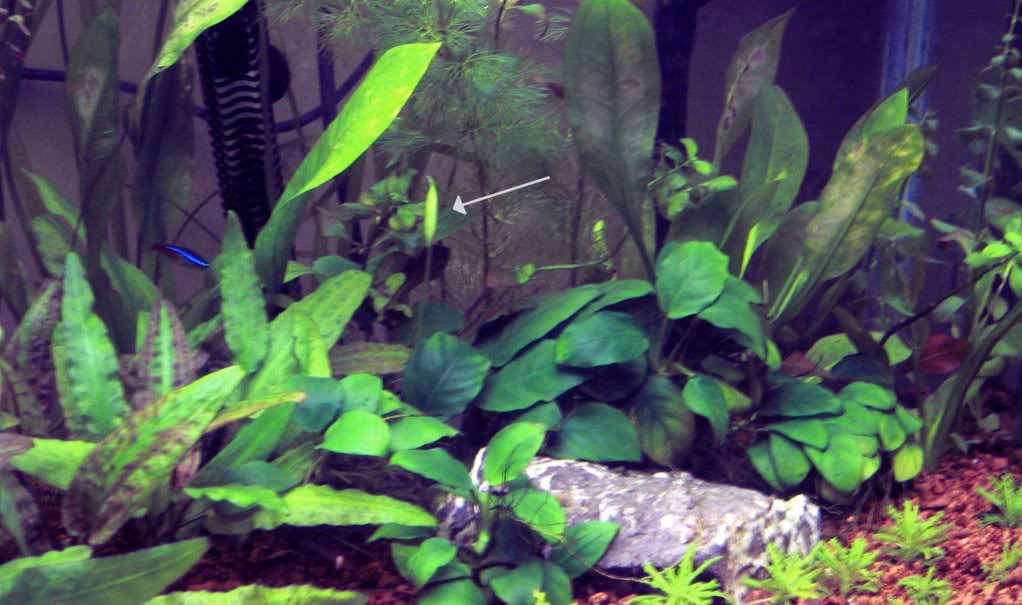 aaronnorth said:
I think the right hand side is off to a good start, not sure aboiut theleft though
Click to expand...

I'm still not happy with the left side either so will probably fiddle with the planting scheme - although this is partly dependant on which plants grow well.


beeky said:
Looks good. It will be interesting to see how this goes, not many people do the natural way these days. The crypt looks a bit like C. affinis as it's quite bulleted(bullated?). Does it have a pink underside?

I assume you have Diana's book? Was it your inspiration?
Click to expand...

Thanks Beeky. Things seem to grow differently using this style of set up, the stems of vallis for example grow slower but appear to me to be thicker than when I used added CO2 and ferts. To be honest I'm not sure if the crypts are either affinis or wendtii - i thought the shape of the leaves resemble affinis more though the descriptions of affinis I have read make me think it is a bigger plant than the crypt I have (a number of years ago I bought both species).

My inspiration was seeing heavily planted tanks that look green and lush after what the owners describe as either neglect or minimal maintenance. Whenever I have neglected tank maintenance in the past all I have ended up with is a tank full of algae. This seemed to fly in the face of the approach I was looking into and a bit more research led me to the el naturel style and Diana's book.
el Naturel set up

The small stem/small leafed plant growing in front of the Rotala is Micranthemum umbrosum - it just about hangs in there without added CO2. 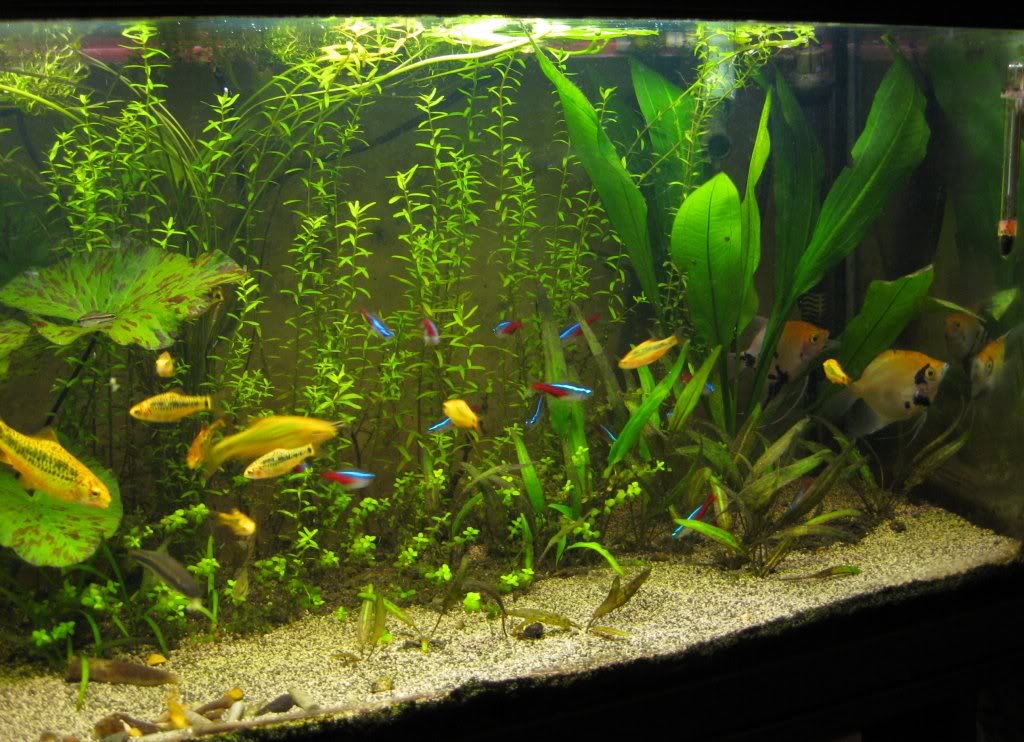 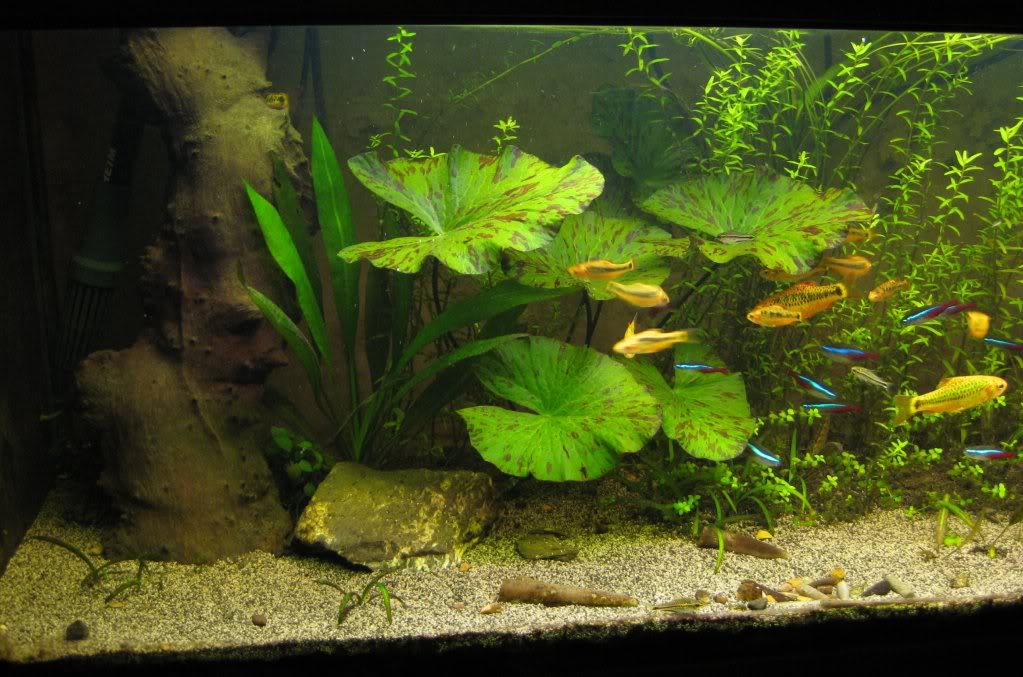 Pygmy corydoras are my current favourite- they dart around the tank every now and then in big groups and you can keep lots of them without increasing the bio load too much. The golden barbs are always active and swimming in the filter outflow. I don't think I would bother with neons again as they just seem to hang around fairly motionless. 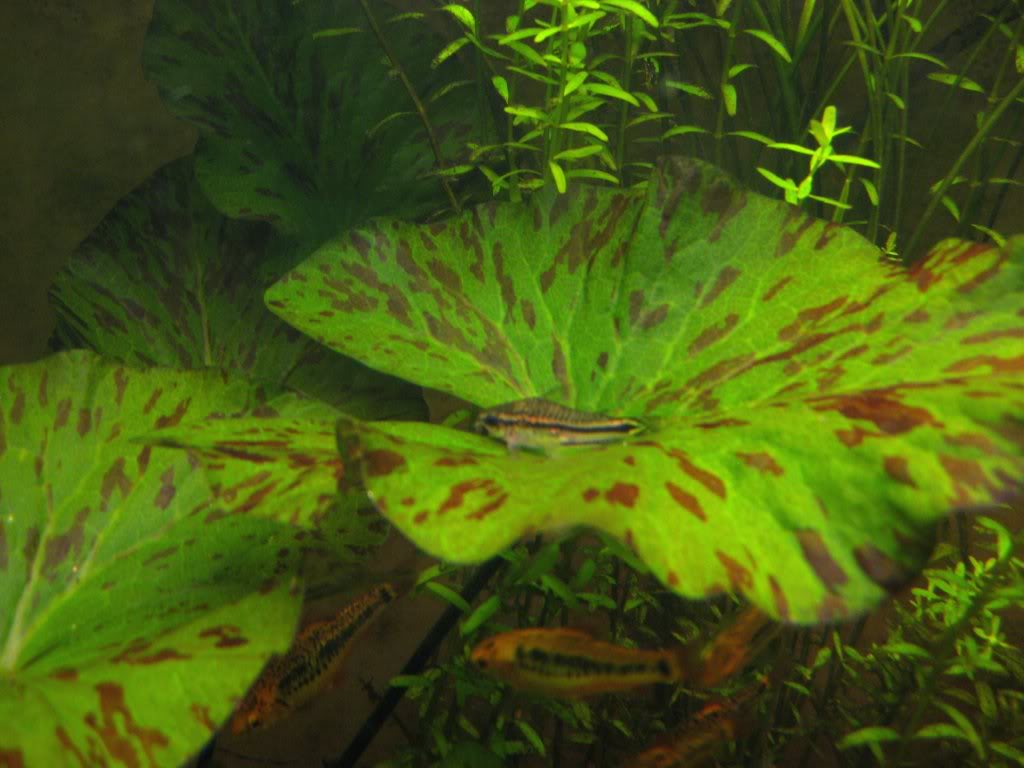 Looking nice. I thought about going this way with one of my tanks, but have to say while i like the idea I was not to excited by the appearance of Diana Walstead's tanks. However I think that it can be achieved and yours is coming on well. I would have put a black or diffuse background on personally, but mayb its not for you?
1600 Litre Sanjarami | UK Aquatic Plant Society
700 litre - Forest's Edge | UK Aquatic Plant Society
300 litre - Wapoga River

I think Diana has the right ideas whilst being a little dismissive of 'aquascaping'. She can be a little quick to call a plant not suitable for 'el natural. She does however show a lot of people that it's not all about super light, CO2 and fertilisation and for that reason should be applauded

I quite like the tank Bren. has a nice natural feel to it and I do like the Corys If I didn't have so many blacks roaming I think I may get some of the pygmys.

The lights don't look to o dim to me either

Nice journal Brenmuk. Have you ever thought of updating it.
.
Aquazeitgeist. YouTube
A Brief and Incomplete History of Aquascaping. Soil Substrate Planted Tank - A How to Guide
Schism Reimagined. NatureScape. Return of the Shallow. Windswept Eternity, Primordial. The Dark Side or What Lurks Beneath
You must log in or register to reply here.