Tim Harrison said:
Just been flicking through this again...almost forgotten what a great journal it is
Click to expand...

Thank you Tim!! This tank is still running strong.. Actualy the longer it takes the stronger it runs. And i'm trying to pimp it with emersed growth in planters. But i haven't updated on it for a while.. I'll give it a shot..

It isn't easy to take proper pictures with house hold materials from a tank that doesn't use artificial light in its best periode. I gets so many light distorsion from the skylight above and the white walls surounding it, it has so many reflection in the glass i would need to build me a custom studio setup around it to do something about it.. Without it its near impossible to take desent pictures. 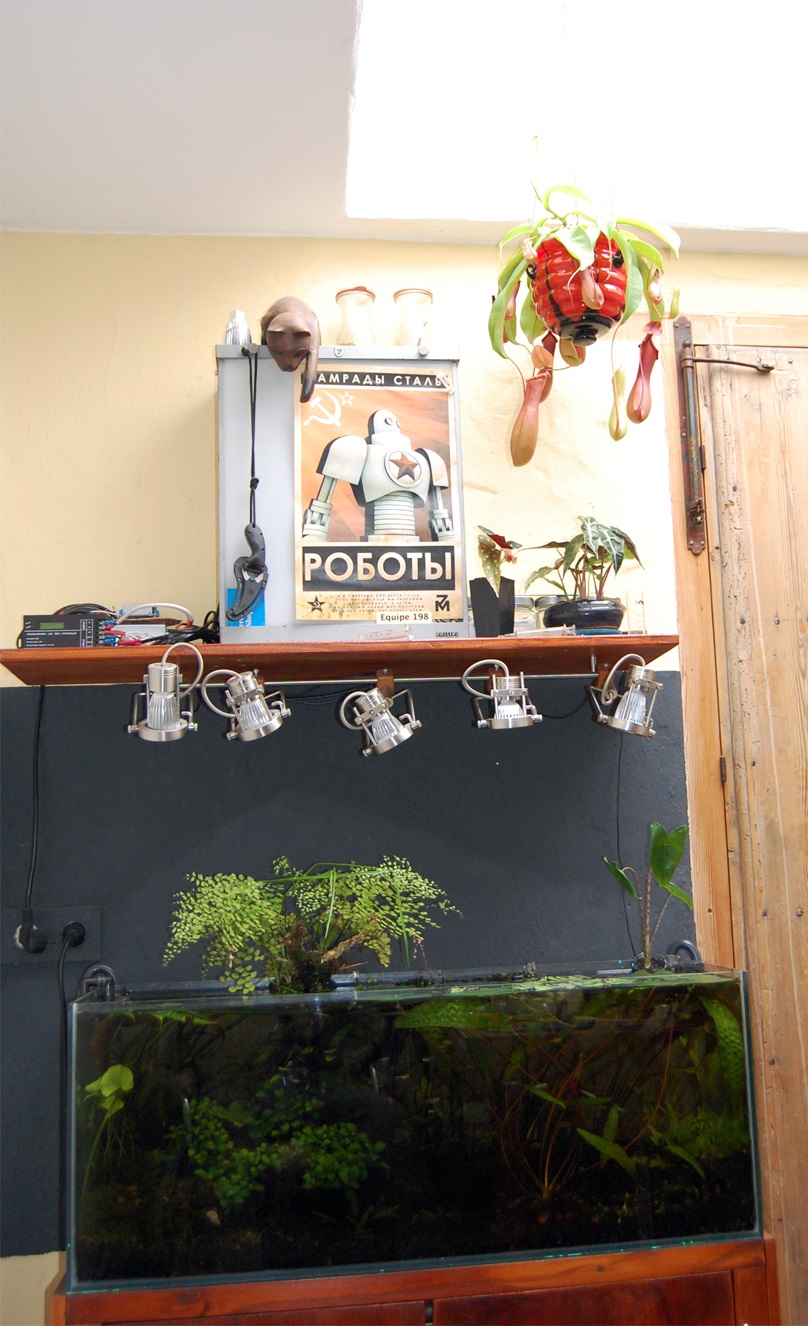 Top right is still a very young Alocasia Zebrina.. I'm still waiting to recieve some more glass planters i ordered. For another Alocasia poly next to it..
The water lily is realy building some body this year.. But it's summer time, i yet have no idea how far she will draw back during the winter periode under artificial lights.. 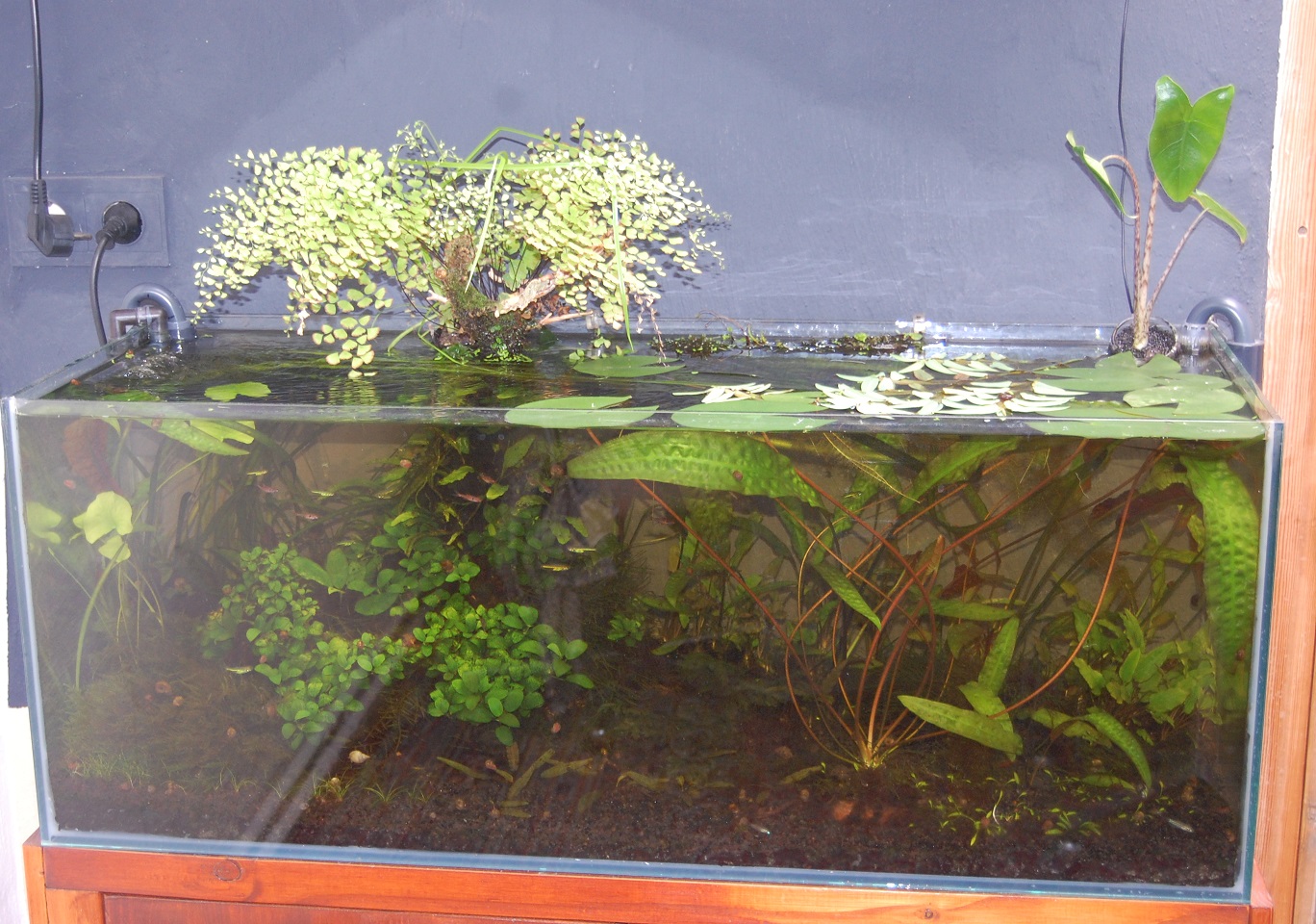 imho the most intruiging Alocasia out there. 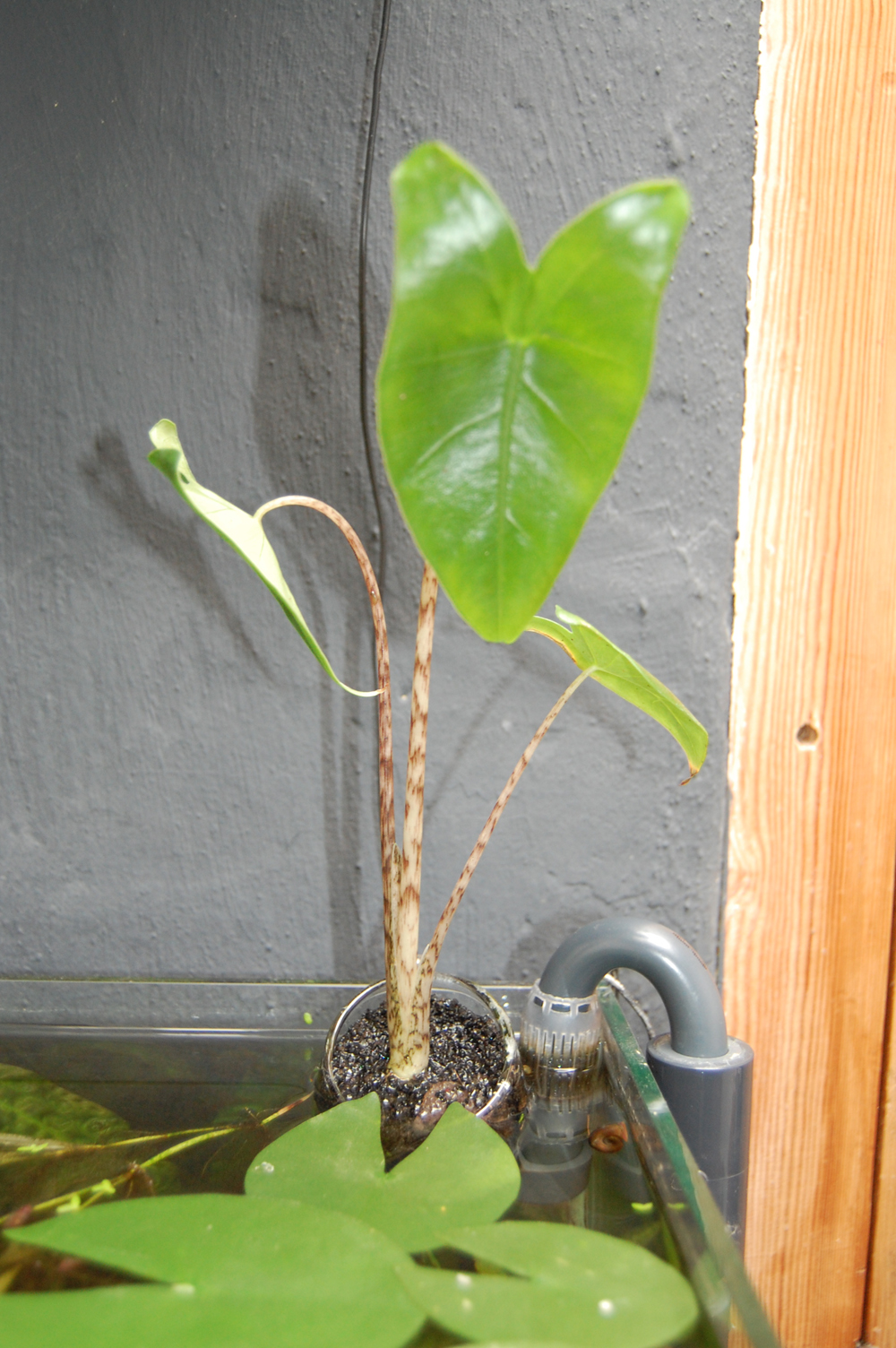 The Poly also a stunner is still waiting for its planter. The Begonia maculata at its right is south american origine. Not for this tank because it is mainly asian exept the anubias.. So begonia is for a later project still in the penn.. 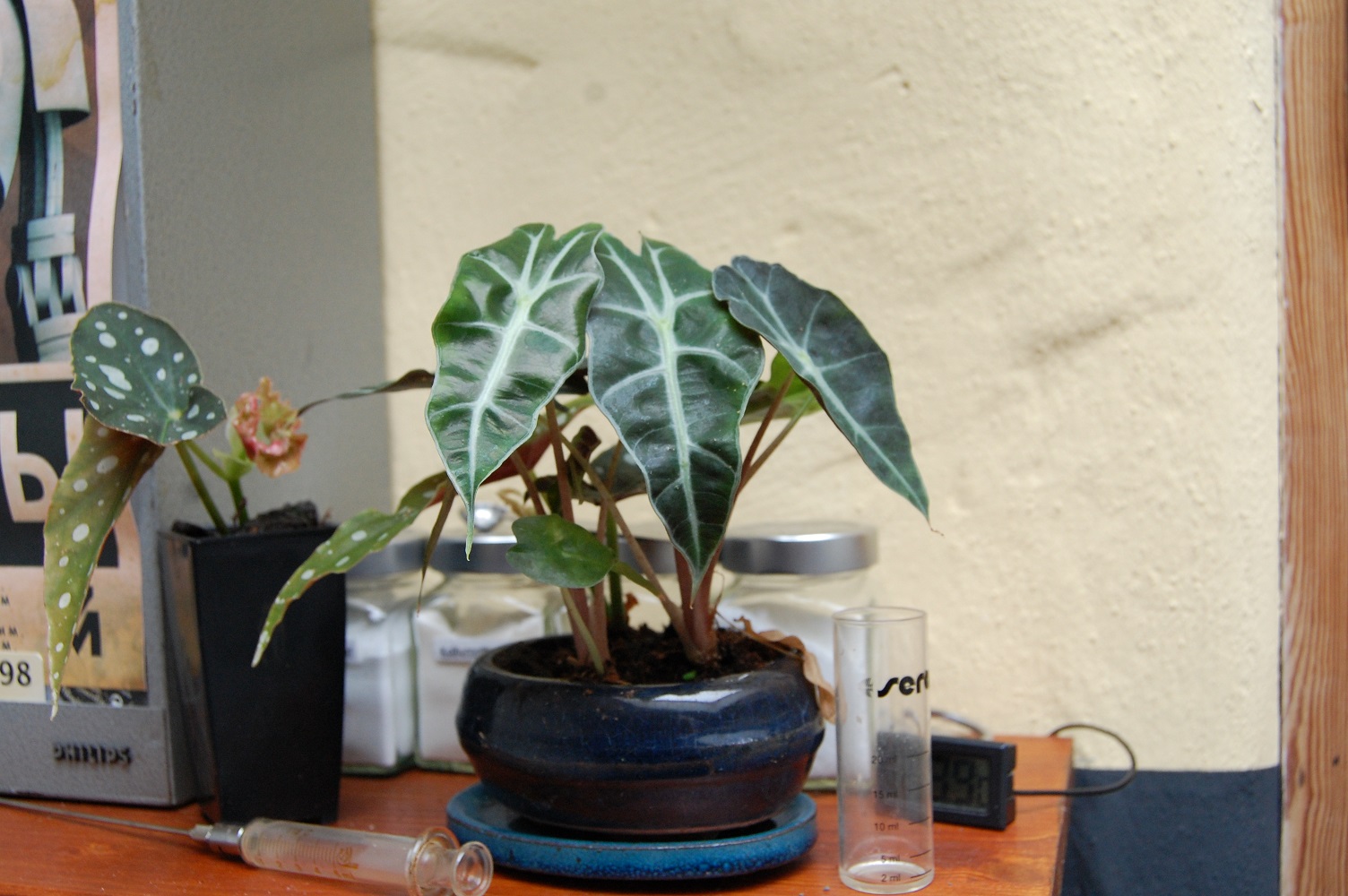 Added a piece of DW to the back panel top rim close to the surface. It as some liver and other mosses and a young Bog Fern rhizome (Thelypteris palustris) still in transitiion. It will take some time to grow and show. And i'm trying to get Utricularia to grow there already for years, but i keep failing on this plant. .. Darn.. 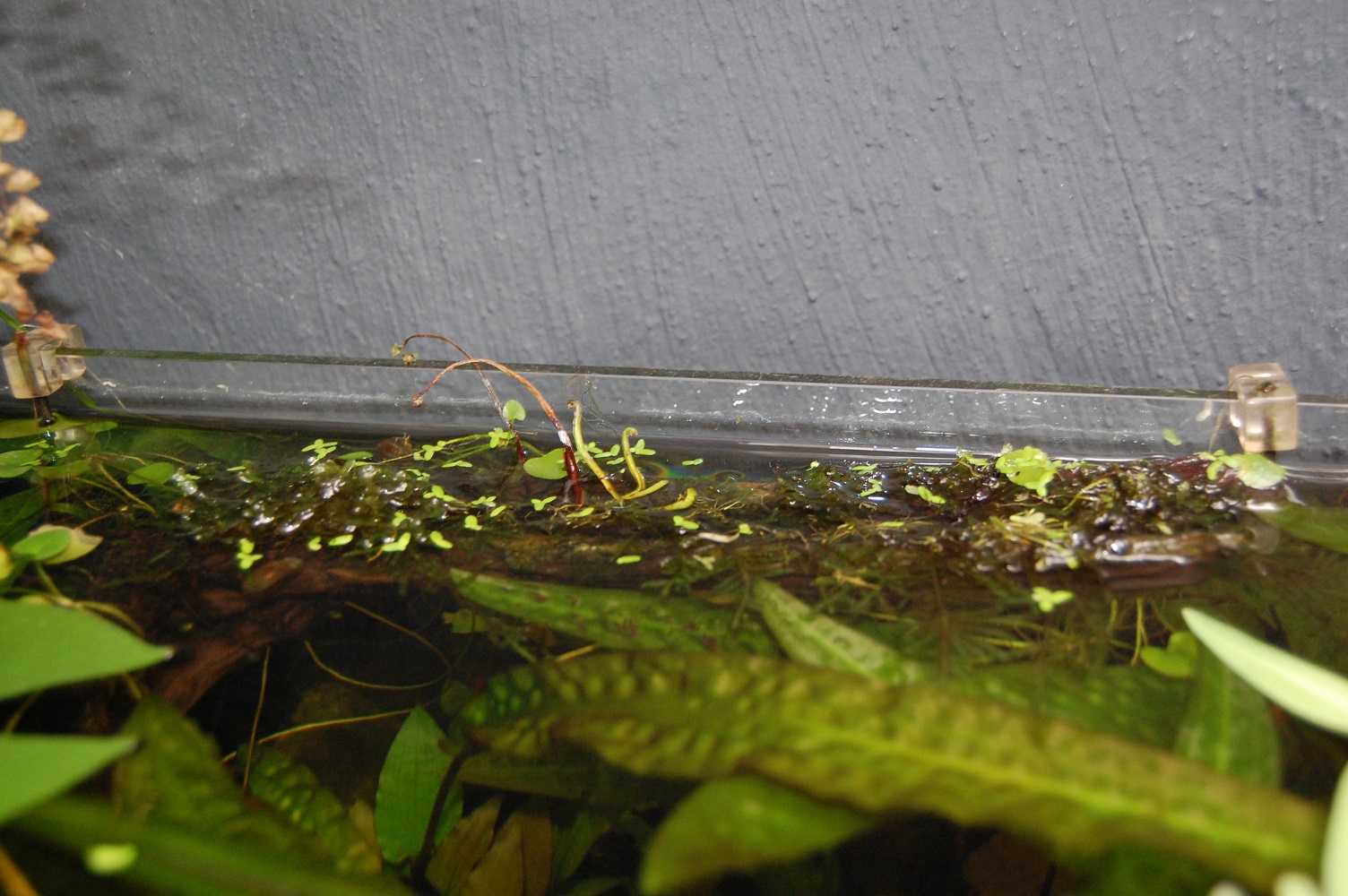 And some emersed Anubias barteri petite in the moss of the tree top.. I discovered the younger the plantlets are the beter they take transition to emersed. Acctualy obvious, the small leaves are very close to the moist moss and stay in the bubble. 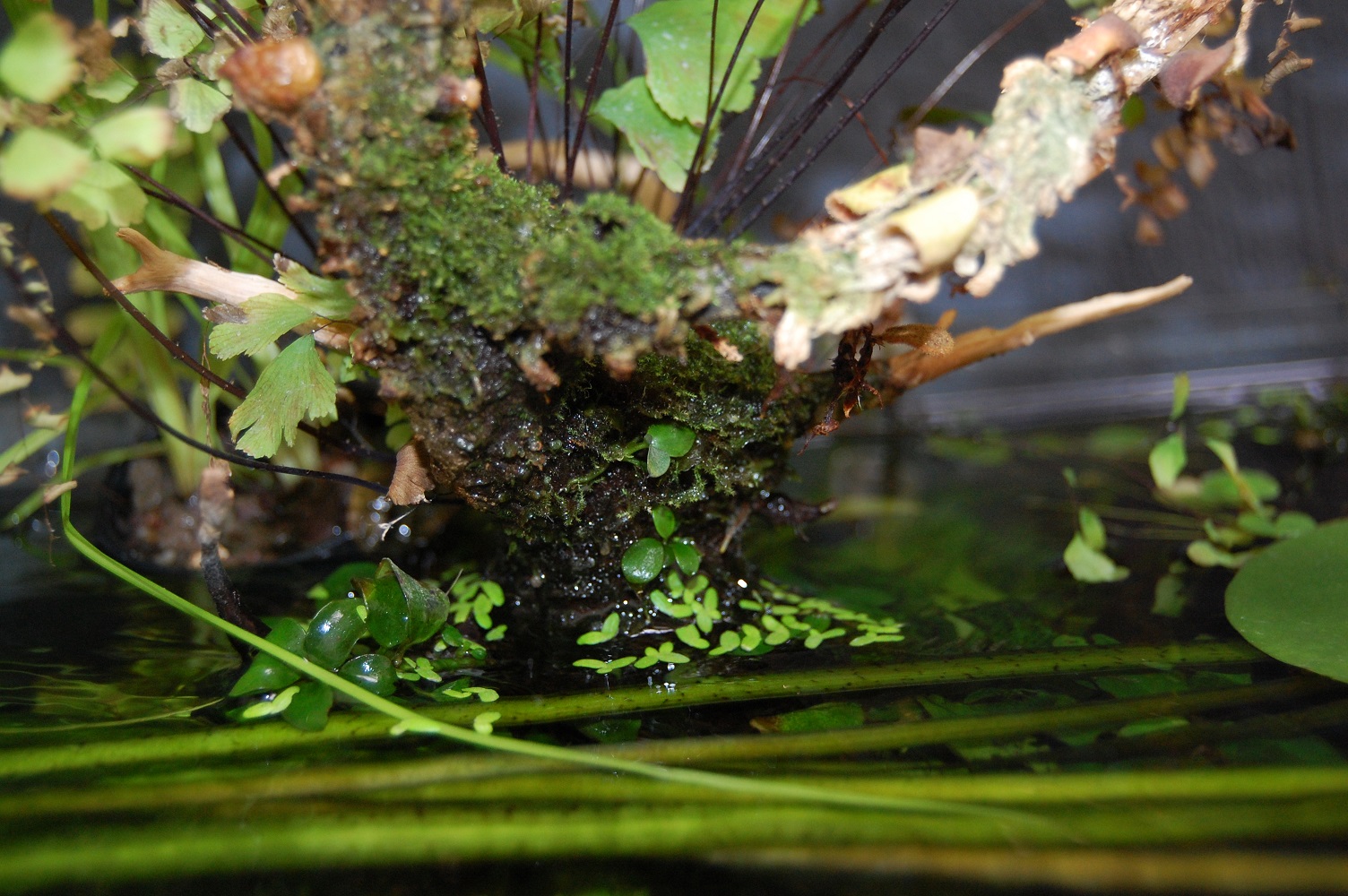 So already running for a few years, but still need a few more..

All planters are in for the emersed plants.... 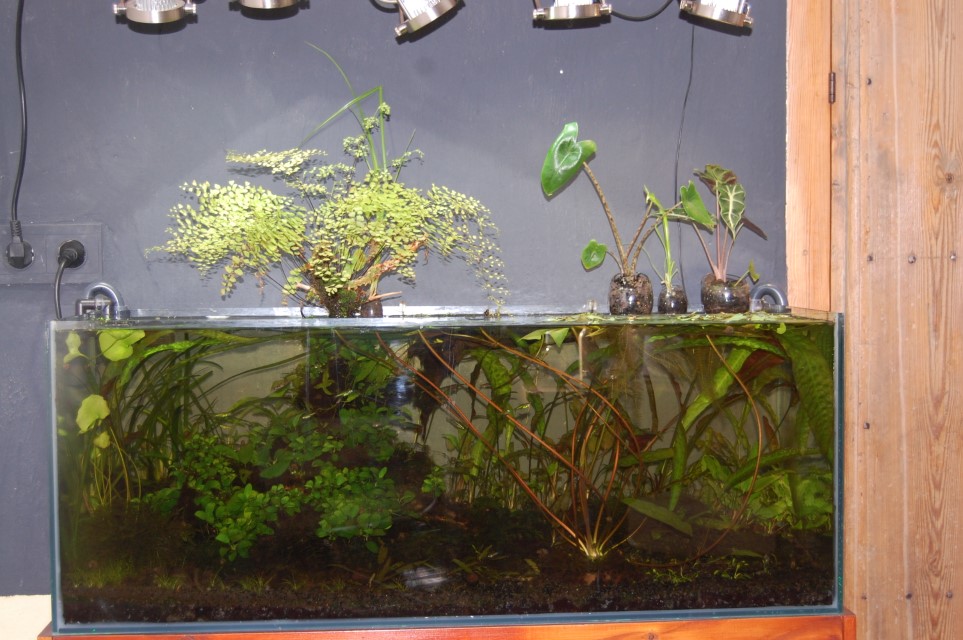 Did place the glas pots a bit higher, so only about 10mm of the planter is in the water. Since these Alocasia's are not realy bog plants i didn't trust them to deep. The Alocasia zebrina didn't realy like to have it's roots submersed all the way.. I hope this will do.. 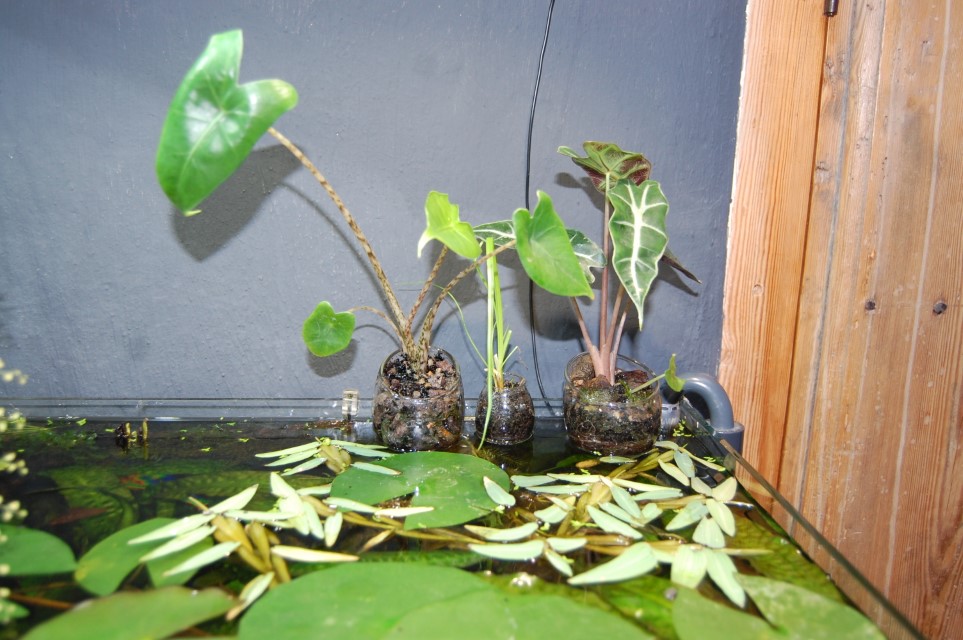 Now it's wait and see how it'll work out.. 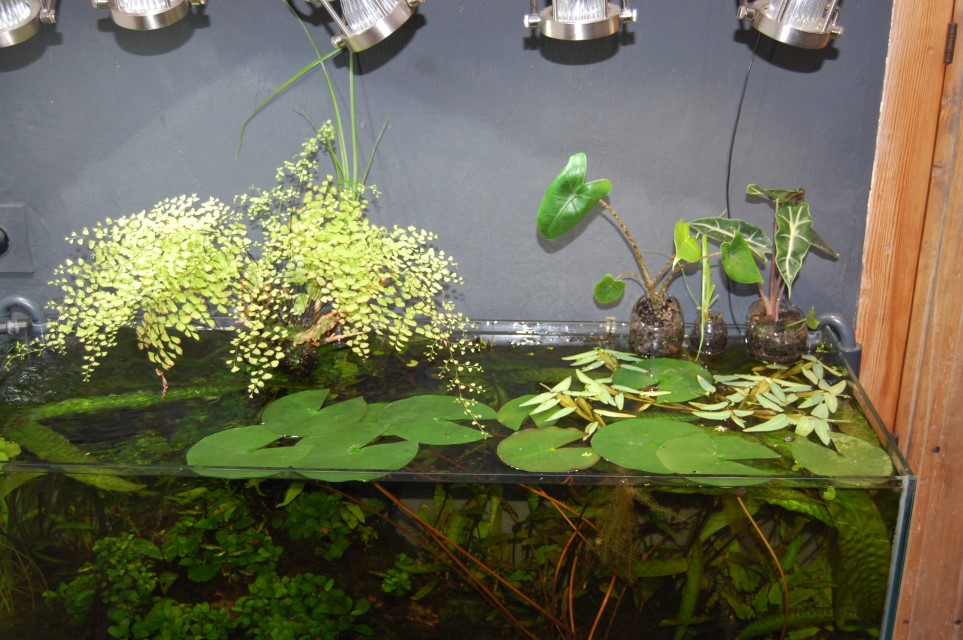 This month 3 years running.. And currently in winter mode..

The top Adiantum having a hard time glued as epyphite to the wood in the dry livingroom climate. But it'll survive. As does the Emersed moss on the wood, bright green in the summer, but kinda going dormant in the winter.. 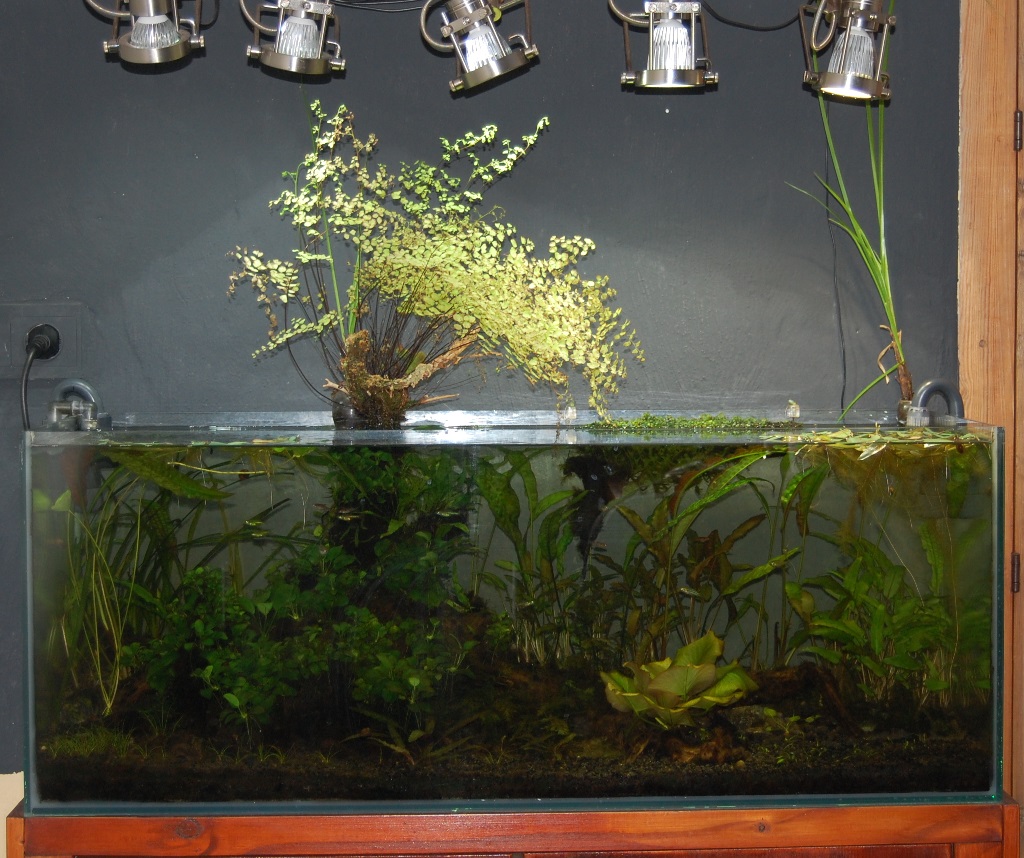 Since a slow burner having much less light now, i popped some fert caps in the substrate and stopped fertilizing the water column. And for the 5th time i'm trying to get UG growing emersed. I hope with a non fertilized water column what i yet didn't try, it might be succesfull.

It's in the livermoss that grows on a piece of DW hanging to the glass.. The liverwort i got from a friends terrarium and i have no clue what sp. it is but grows rather well in both conditions.. I think its an ideal UG substrate.. We shall see.. Funny to see the different grow forms together, more compact and round emersed and elongated forked like a fat ricia submersed. 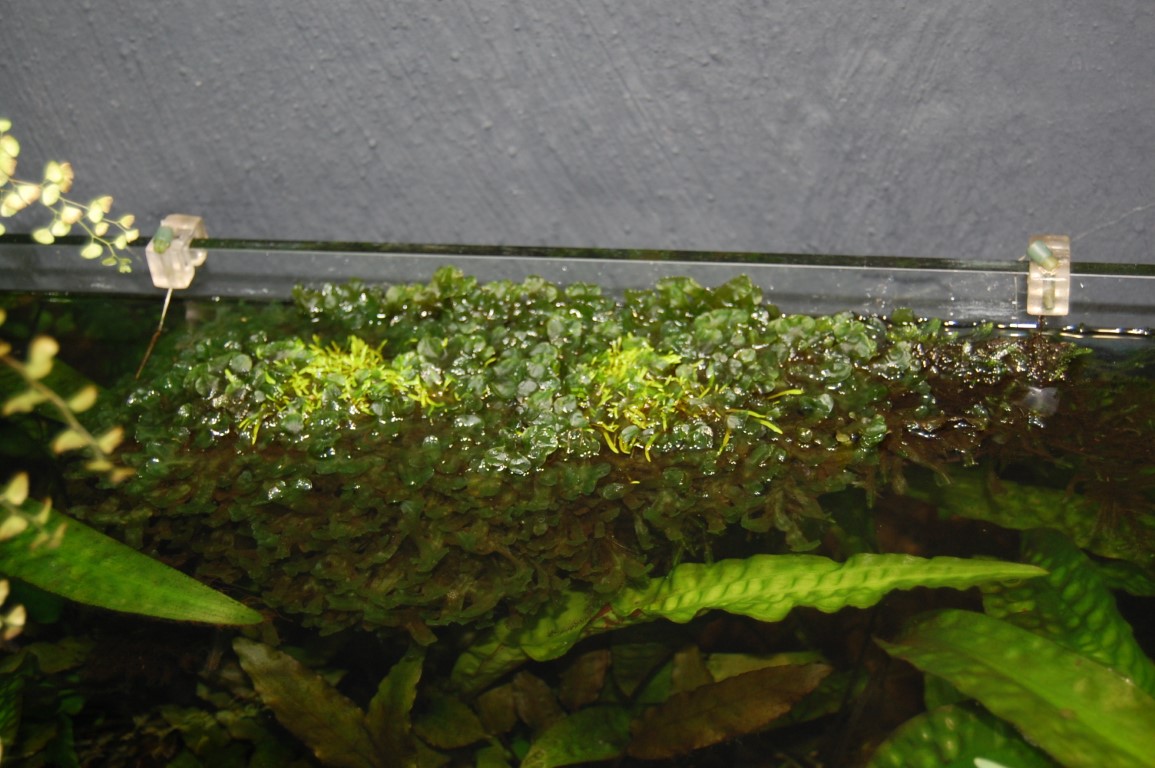 This is Lily Vanilli in her winter dress Actualy quite a beauty, submersed grow form in light green with pink.. She getting more and more matured i hope she flowers on me one day... 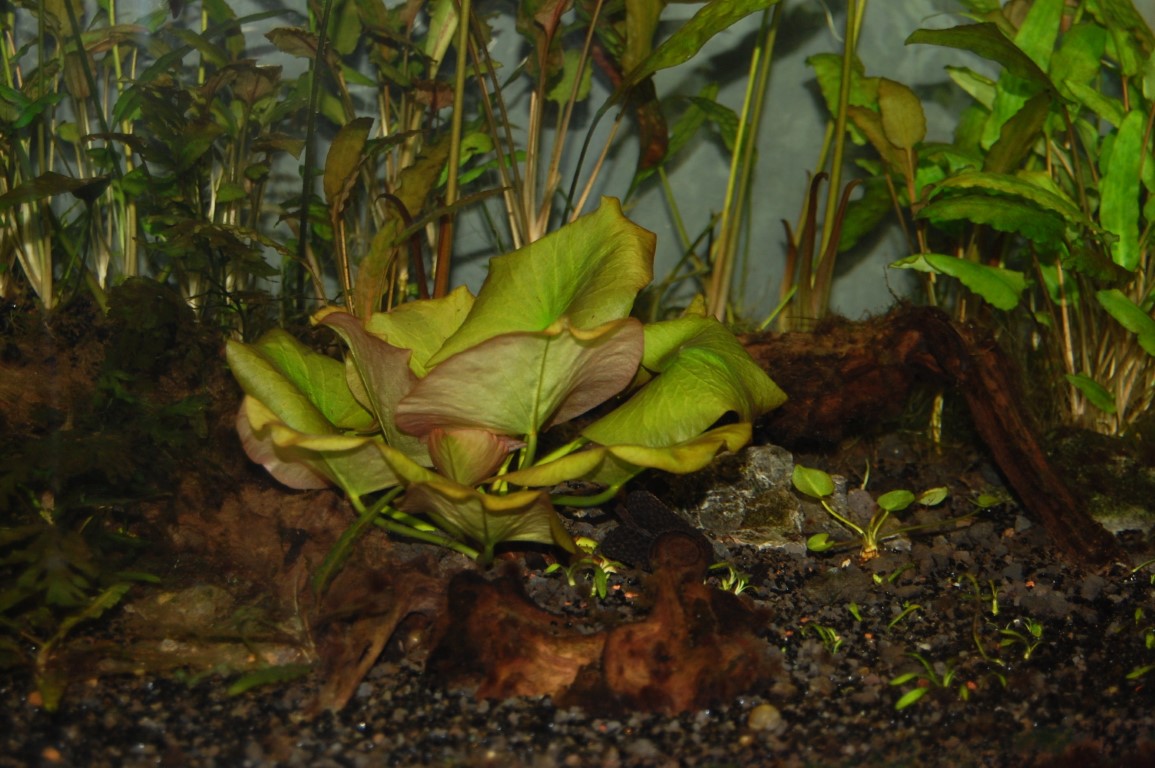 Also gave her a baby niece next to her from another thank.. That is a significantly smaller sp. I hava yet no idea what size it will grow in this rather dynamic lit tank. In the other tank it grew penny size floaters. 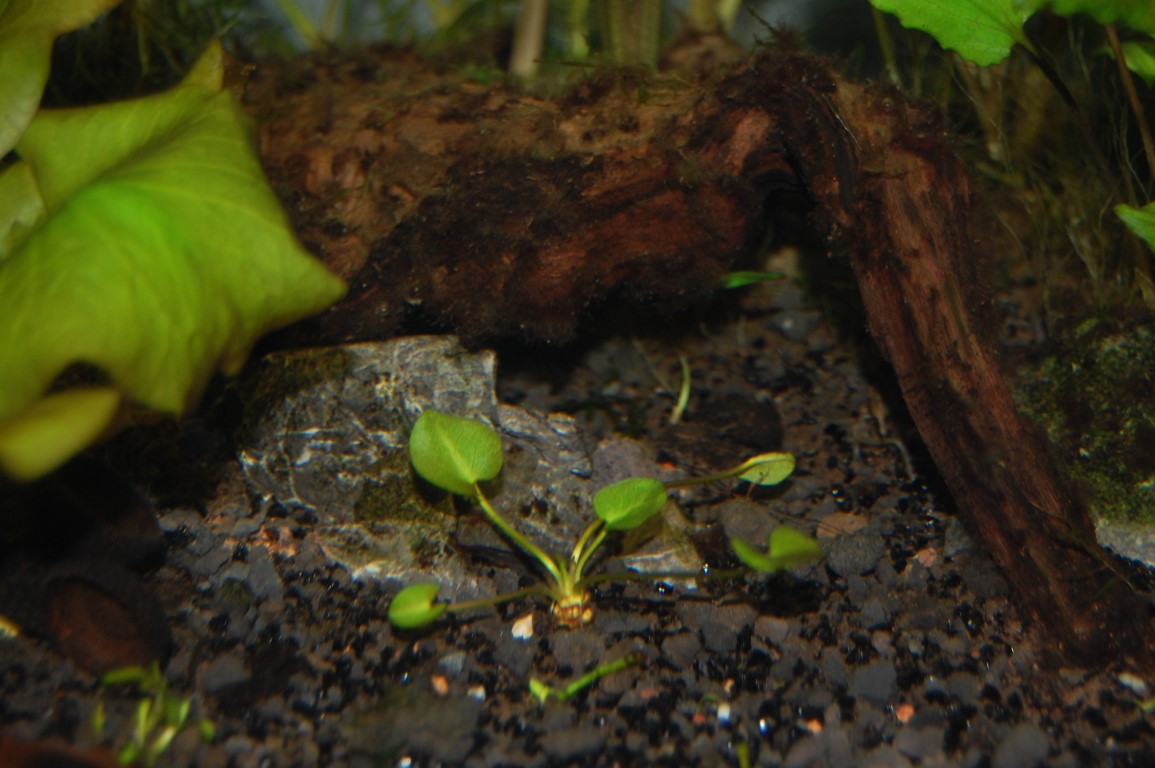 Once upon a time, a long time ago there was a lot of wood, now we only see a lot of Anubias... 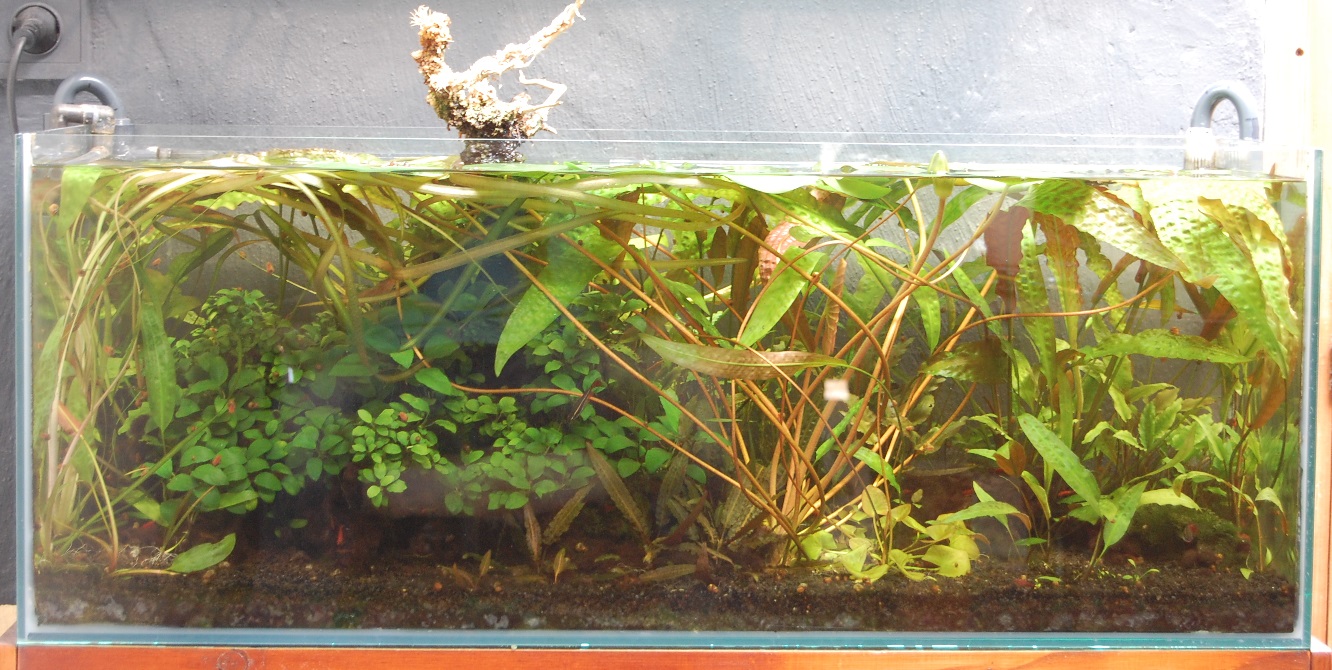 And a surprise, it took her 5 years to mature 4 years to grow her first runner baby plant and this summer a year after that she presents me with her virgin flower bud... All i can see for now is that it's going to be a white one... A burgundy princess Lily should be Dark Red instead... But i guess it's the +8.5 pH making it white? 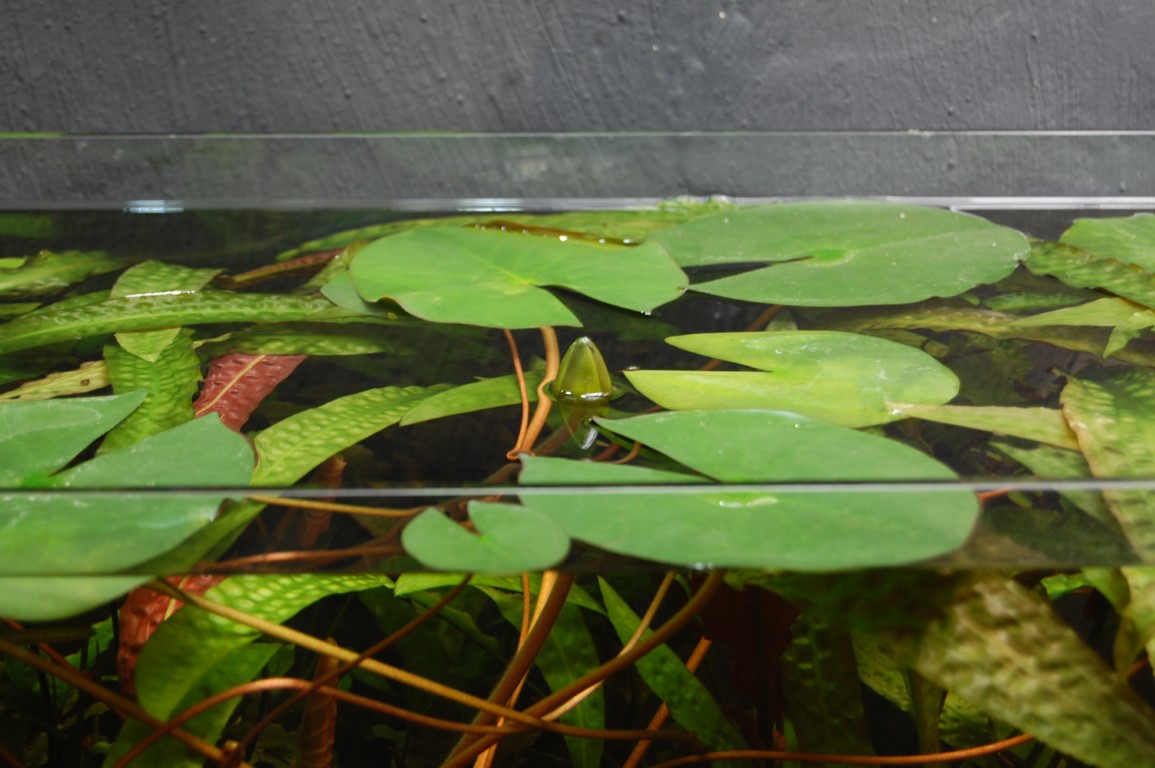 Never mind, i still like it, i'll update on the flower after opening... 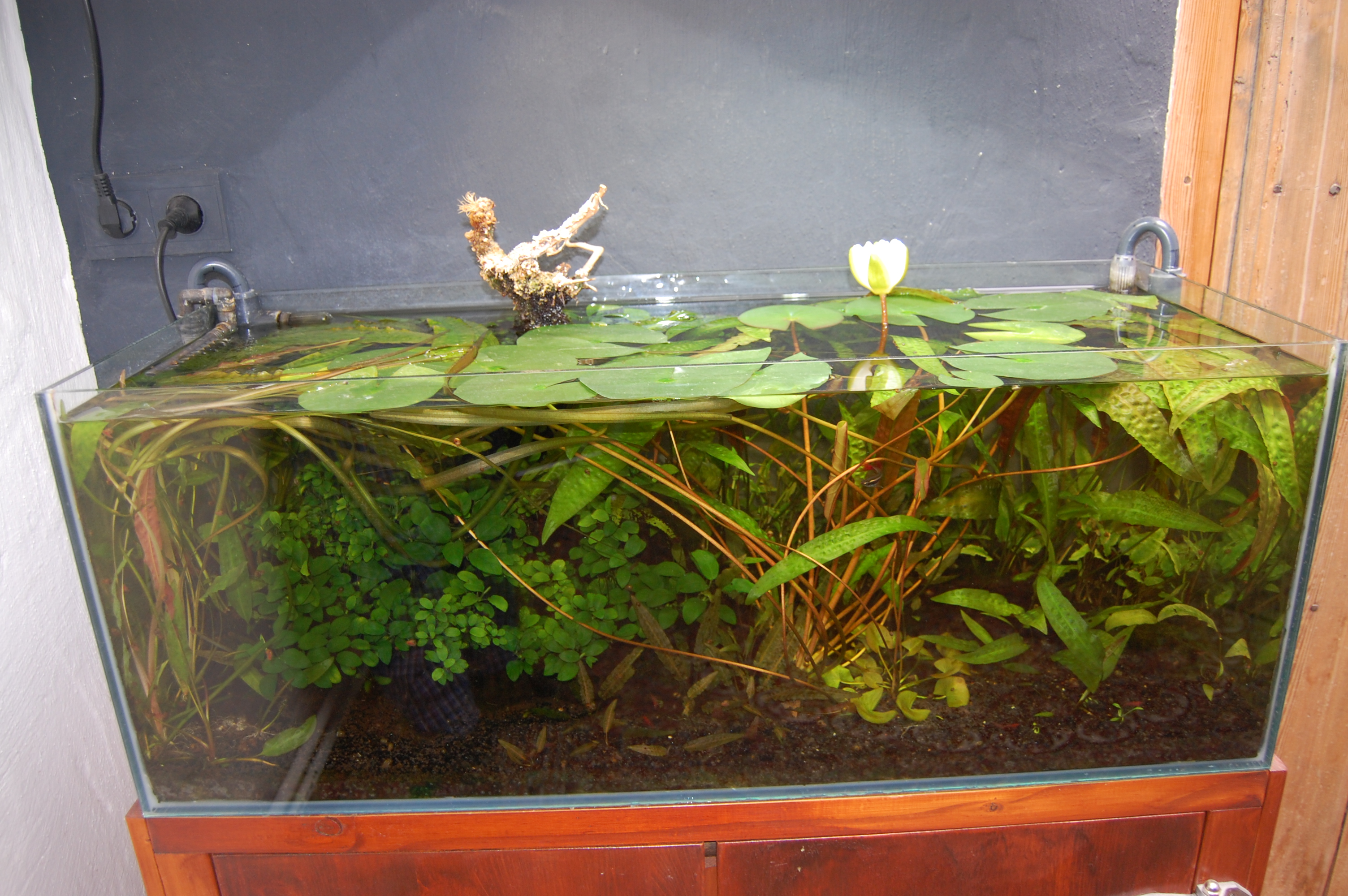 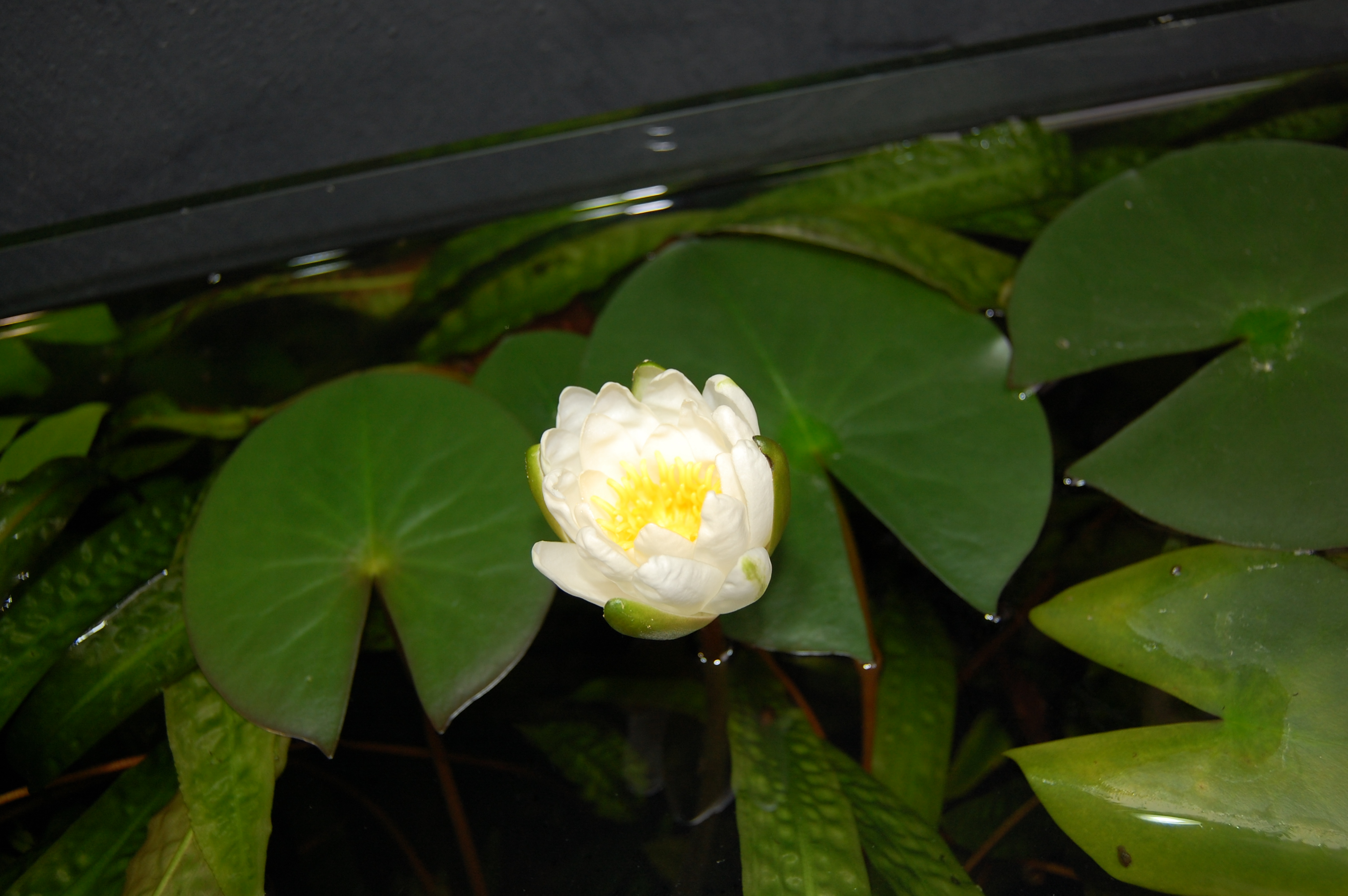 Every day, closing from dusk till dawn and then opening a tad wider again... 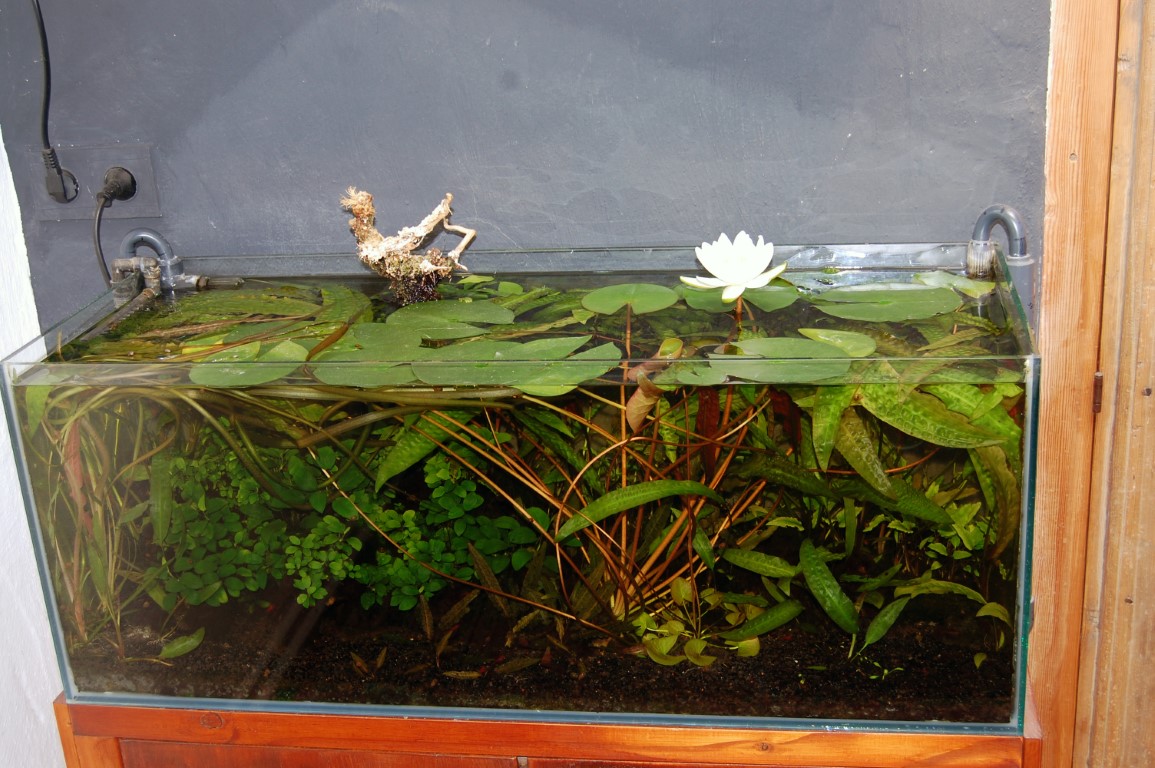 It's fun to observe, how it actually really goes to sleep and wakes up again. Closing up not only the leaves but also retracts down till the flower base touches the water surface, then at dawn erect again an inch above it before slowly opening up. 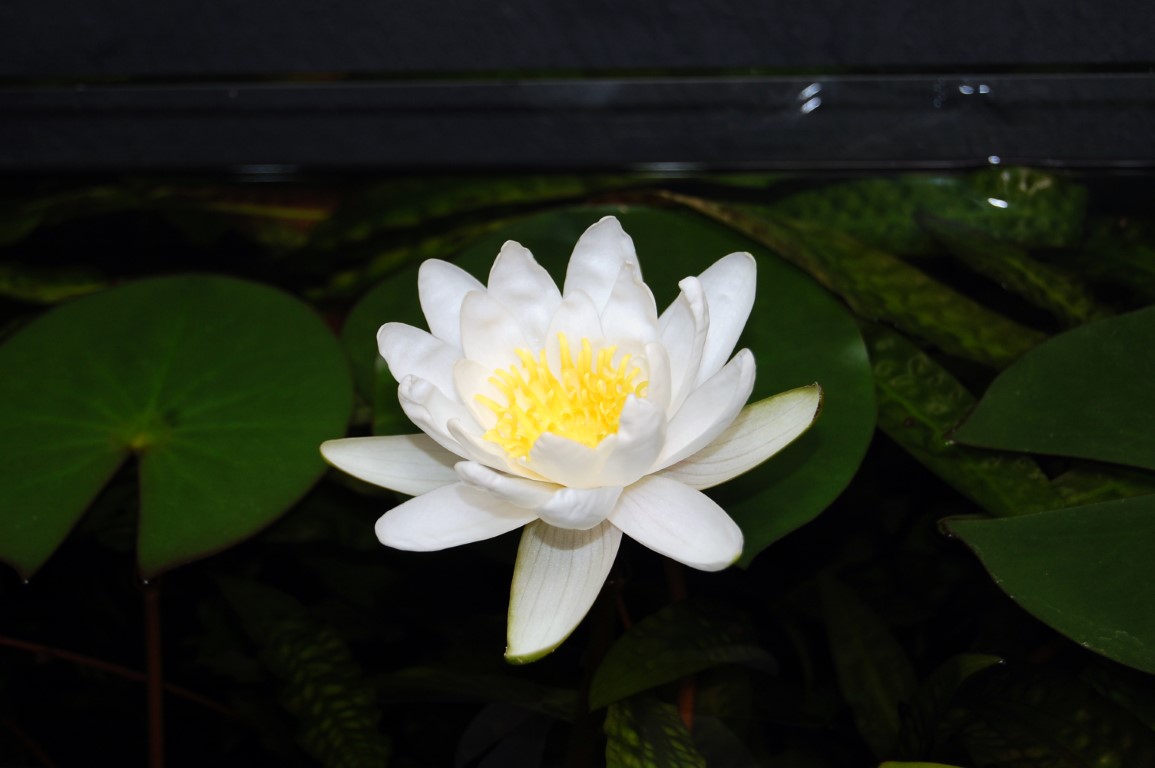 Unfortunately, it lives about 5 days, that is if she decides to keep it at making only 1 flower.

This is the night-time resting position... With guardian watching over... 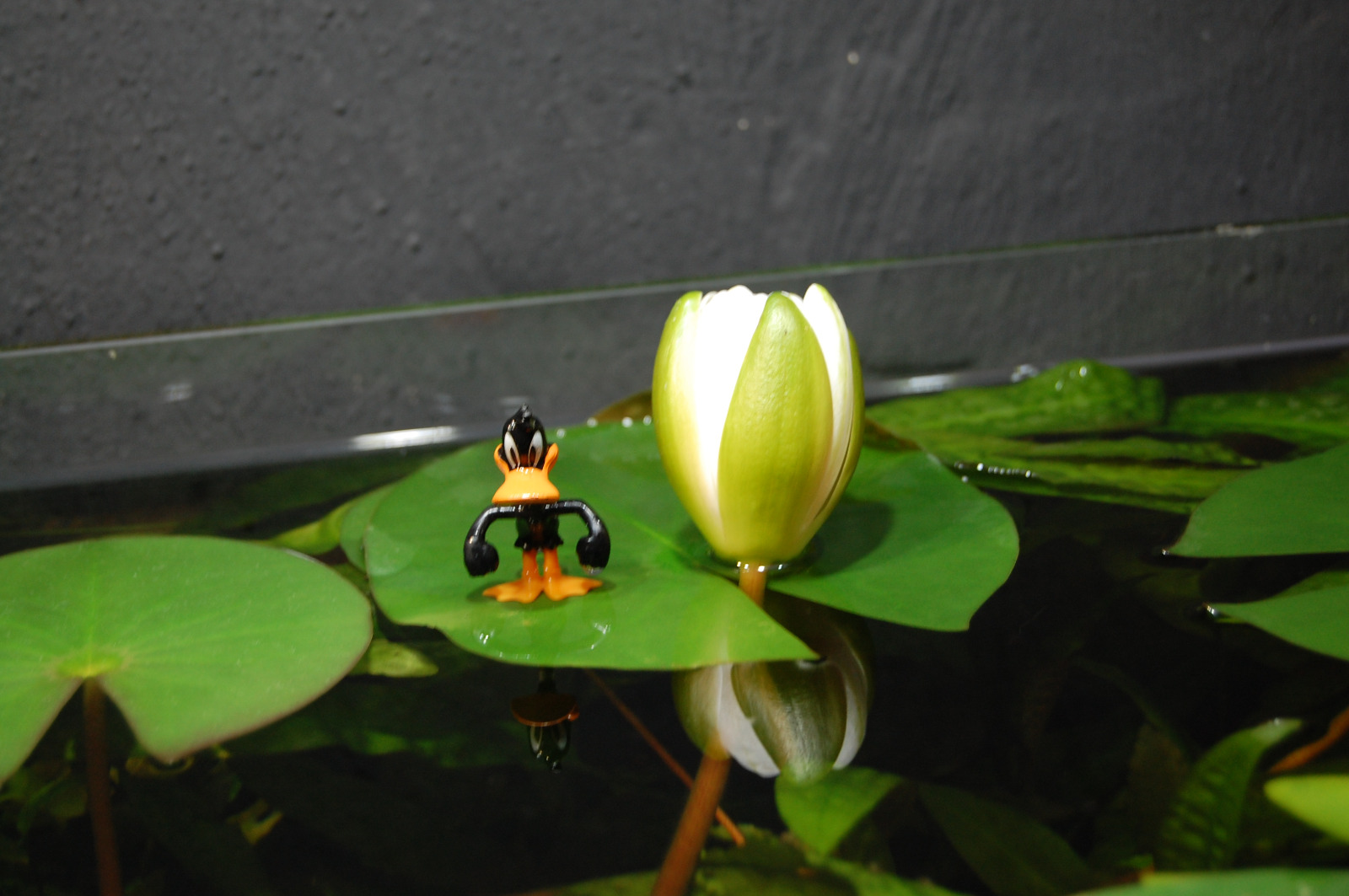 zozo said:
With guardian watching over...
Click to expand...

Oh... so this is how the Duckweed really looks like. 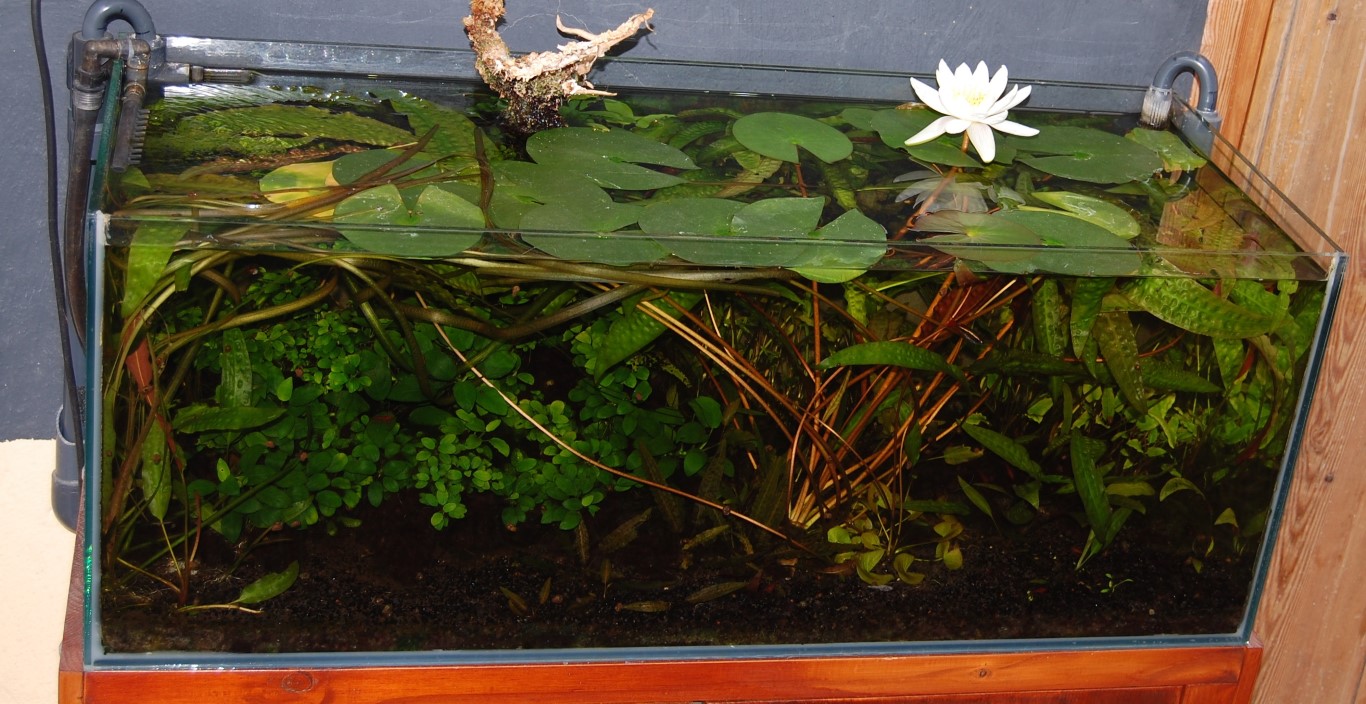 Each day spreading and opening a tad wider than the day before... As if she's trying to get attention and calling out to the bees "Hello!? C'mon girls I'm here!! Occasionally I have some fat bumblebees flying into the house, but yet none found here interesting enough. Would be a nice picture if one will before she's gone... Won't be long and she is, I guess this might be the last pic... Pitty that it is such a long term and uncertain process for waterlilies to flower in an indoor aquarium.

Who wouldn't want to have this all the time all year round to gaze at!?..

My girlfriend said it's too beautiful, it looks almost fake!... 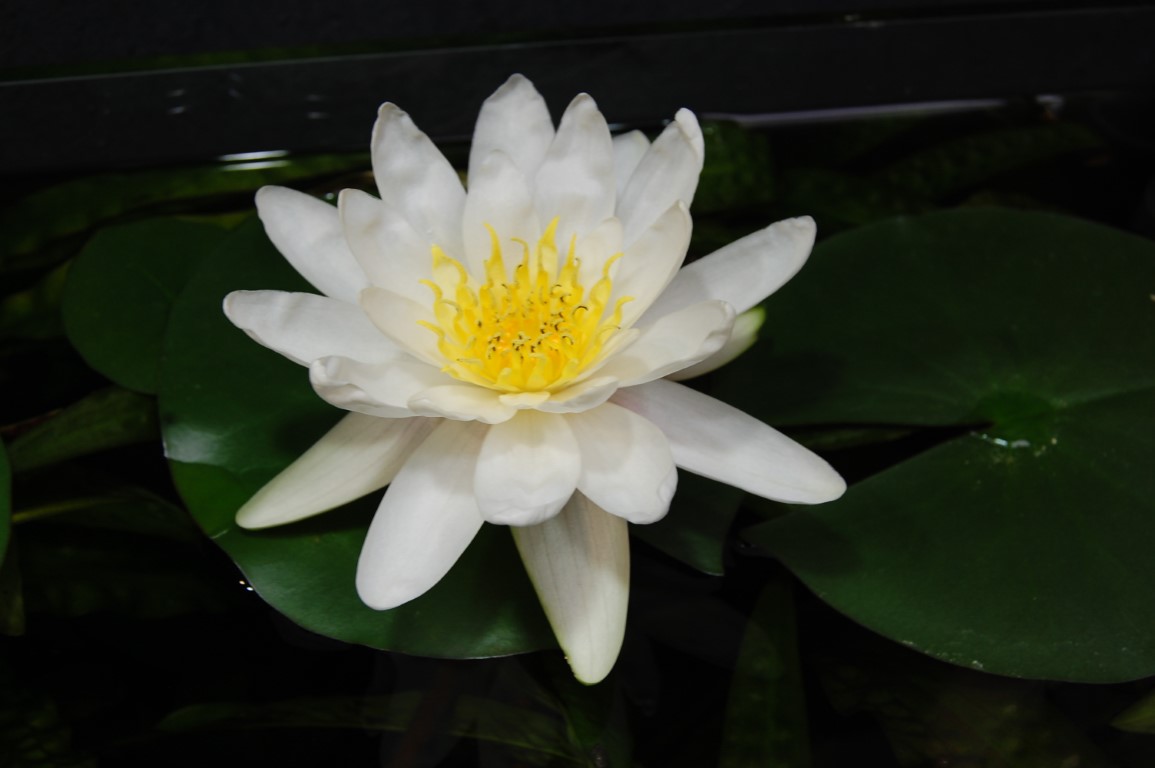