Ages ago back in the 'DIY LED Lighting' thread I mentioned that I was going to build an LED strip to fit in my aquarium: http://www.ukaps.org/forum/viewtopic.php?f=50&t=3687&start=40#p41043

Originally, I was going to mount some LEDs onto a strip of aluminium and slide it into some acrylic tube to put in my Jewel aquarium. In the end I decided I wanted to get rid of the Jewel light so that I could use some standard 4' 54W tubes, so I went ahead and bought a 6x54W overtank luminare from allpondsolutions. 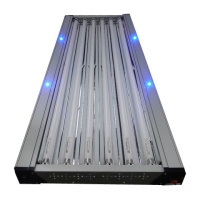 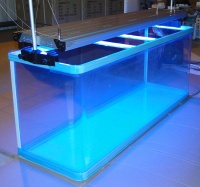 I don't have any pictures of the unit after it arrived as I excitedly disassembled it to work out what I was going to do with it!

I decided that to start with I would remove the two tubes in the middle and place a strip of LEDs in their place with the thought that at a later date I could do the same with the remaining two pairs of tubes. So I proceeded to cut a slab of aluminium to size (1000mm x 50mm x 20mm) and played around with various arrangements of LEDs on it.

I then marked out and punched the drilling locations on it:

Then spent an entire afternoon drilling:

The disassembled luminare was modified to hold the aluminium bar:

I then mounted and soldered all of the LEDs onto it. For the white LEDs I used some Luxeon Star 1W LEDs which I had from ages ago. The blue LEDs for night time are 5x Royal Blue Luxeon Rebel LEDs which I reflowed onto some stars from led tech.de.

The fluorescent ballasts that came fitted into the light were just bog standard high frequency ballasts. I bought a pair of Osram Quicktronic ballasts which would allow me to dim the T5's to achieve a smooth change in intensity during the day:

The 1-10V interface to dim the T5's can vary the intensity from 1 to 100%, but to turn the tubes off, you have to remove power to the ballast. I simply have a pair of relays to turn on/off the power to the ballasts. The 1-10V interface became a fun little challenge since the inputs on the ballasts are not isolated from the mains, so must therefore be treated as having mains potential on it. I designed a fully isolated 1-10V generator on the PCB though a combination of galvanic and opto isolation.

A small galvanically isolated DC-DC power supply module supplies power to this circuitry and a opto-electronic digital interface allows an output voltage of 1-10V to be set.

The LED driver PCB consists of 9 drivers - 8 of these are for 8 banks of 5 LEDs and the final driver is for the bank of 5 blue LEDs. The big solder pads are where the wires from the LEDs will be soldered onto:

Here is the first test with the LEDs attached:

The next thing to do was to wire up the rest of the light. A simple job which ended up taking all day!

Here is another photo of the PCB in-situ after reassembling the entire light fitting with the blue LEDs on:

And again but with the T5's turned on:

The USB port which will allow an easy way to set the timers:

The five core cable (above) carries both mains and the 24V supply for the LEDs and control gear.

Lights fully on with the stock tubes: (new ones from lampspecs to be installed after programming/testing):

To set the timers and control the light, I decided to use the USB link to allow the microcontroller to be accessed from a terminal program on a PC. The LCD on the front of the light unit is a bit small to be able to easily view all of the details when setting up the light.

The microcontroller has been programmed with a straightforward user interface that allows full control of the unit. The home screen is as follows: 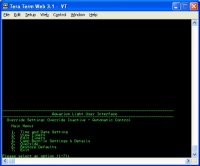 The first option is fairly self explanatory. Both the time and the date are stored in the real time clock, and although the date is not used by the timers, it is displayed on the front panel LCD along with the time under normal conditions.

Option two displays all of the timers. The screen looks like this: 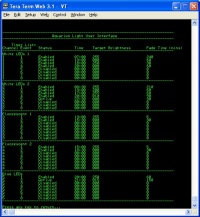 This is a great way to view all of the details at once to make sure all of the patterns are correct.

I chose to set up the light so that there are five channels: the white LEDs are controlled in two banks, another bank for the blue LEDs, and finally two separate channels for the two fluorescent ballasts.

Each channel has eight 'events', allowing up to eight changes in brightness per day. There is enough non-volatile memory to store about twelve events per channel, but I felt that eight was sufficient.

Each event has the following attributes:

I programmed the timer events so that it is continuously going through all of the channels and events calculating the correct brightness. I did this because from past experience with various cheap plug-in timers which only do something if there is a match between the current time and the timer time, it's possible to leave the lights or CO2 on all night - especially when putting the clocks forward early for BST. If I change the time or timers, it'll recalculate the correct brightness for the lights and slowly fade to that instead of waiting until the next day for it to operate properly.

Option three on the main menu allows the timers to be changed. First it prompts you to choose which channel you want to modify. The group of events for that channel are displayed in a similar manner to the entire list of timers and events. From there you can choose which particular event you want to modify and it steps you through each of the settings for that event before asking for confirmation to store in the non-volatile memory.

Option four displays information about the 'burn-in' and 'burn time' of the fluorescent tubes. 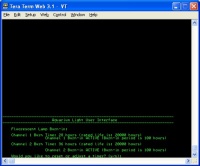 Osram recommend that all fluorescent tubes are burned in for 100 hours at full brightness before you dim them to prevent premature aging of the tube. When you replace a tube, you call up this menu to reset the timer for that channel. You can also set an offset (if you've pre-burnt in the tube) and set the expected lifetime for that tube when you do this. When you reset the timer, the light will not dim the tube until it's been on for 100 hours, it'll only turn it on to 100% or off.

From this screen you can also see how long the tube should have left, although I would probably change the tubes much sooner than the manufacturer's expected lifetime!

Here you can force the fluorescent tubes on, LEDs on, everything off, or let the unit control the brightness.
DIY Automatic Dimmable T5 & LED 120cm Luminaire

Thanks for the comment. There will be more to come...

Will be interesting to see how each of these differ!
DIY Automatic Dimmable T5 & LED 120cm Luminaire


aptsys said:
Thanks for the comment. There will be more to come...

Will be interesting to see how each of these differ!
Click to expand...

Yeah I took a look at that thread, and somewhat based my selection from what I saw there.
DIY Automatic Dimmable T5 & LED 120cm Luminaire
S

Just realised I never got round to updating this thread. The light has been running since November with no issues and in my opinion looks really good. My partner was somewhat sceptical about mounting from the ceiling, but the ceiling has only two 2mm holes in it for the steel wire. All the mounts are in the void between the ceiling and the floorboards above, so it looks really slick.

The discus used to be startled by the lights turning on on the old Jewel light fitting, and also by me walking in to feed them in the morning whilst it was still dark. They appear to be a lot calmer these days as the whole effect is seamless and are now comfortable enough to constantly torment the cats!

After a couple of hours swapping tubes in and out the best combination of tubes was:

With all the tubes on, the tank is very brightly lit:

There is an overlap of one hour when all the tubes are on giving the ‘mid-day’ sun effect, but I may end up reducing this to 30 minutes or moving this to later in the day when the plants are towards the peak of their photoperiod. The Grolux and Philips De Luxe Pro tubes fade up first. The 865 and 880 tubes are the last to turn off. I’m sure the plants don’t really care, but this seems to look the best over the few hours the tubes are on.

The LEDs are the main illumination for the majority of the day. From 7am till 11am the LEDs slowly ramp up to full intensity. With one row of LEDs at full the aquarium is adequately lit for viewing.

With both banks of LEDs on, the light output appears to be equivalent to about 75W of T5, though much more directional giving fairly sharp shadows with ripple effects.

Between 5pm and 9pm the white LEDs slowly fade down to about 5% and the blue LEDs are at full power:

By 11pm, the white LEDs are off and the blue LEDs are at 5% and remain that way overnight giving a very deep blue (the LEDs are royal blue) low level ambient lighting.

At some point in the next month I will be rescaping the aquarium as I have severely neglected these plants after some seriously busy months at work. The crypts are too large now to get back down to the size I'd like, so I'll probably remove everything and maybe do a carpet with riccia and a vallis background. The carpet may not work though as the Corydoras Sterbai have gone mental with mating and I now have about 30 baby corys digging around

New babies seem to appear every week and are somehow avoiding being eaten by the discus while tadpole sized.

Let me know what you think!

What a fantastic DIY! Am wondering if you could share your schematics for the DIY LED dimmers and microcontroller? It would be pretty cool to integrate some digital timers and dimmers into the whole unit.
You must log in or register to reply here.