Matt @ ScapeEasy said:
Do you have any plans for the centre of the scape or are you liking the open look?
Click to expand...

I have planted C. wendtii 'green', they're just not visible yet and also plan to let vallesneria nana spread a bit towards the middle.

That will look stunning! Really loving this tank, keep us updated!!

Thanks a lot, Matt. Since I cycled the filter in my nano, I think I can start adding livestock rather soon. I've been thinking about dario dario or an apistogramma pair, but not sure. Suggestions are veru welcome!

Dario darios need for live food is the only thing that has stopped me purchasing previously. I'm a massive dwarf cichlid fan... both are very good choices. Plan ahead to ensure you get fish at all levels in the tank. For example pencil fish are my favourite surface dwellers...

Matt @ ScapeEasy said:
Dario darios need for live food is the only thing that has stopped me purchasing previously. I'm a massive dwarf cichlid fan... both are very good choices. Plan ahead to ensure you get fish at all levels in the tank. For example pencil fish are my favourite surface dwellers...
Click to expand...

Love pencilfish. Aren't they prone to jumping though?

JEK said:
Aren't they prone to jumping though?
Click to expand...

I thought so. I've also thought of some dwarf corys, not sure how they do without sand though? I'd imagine that it might not be a problem since they are less benthic than "normal" corys but not sure..

Re the pencilfish... I have a closed tank... all I can say is I don't hear much jumping... surface cover will help of course.

Matt @ ScapeEasy said:
Re the pencilfish... I have a closed tank... all I can say is I don't hear much jumping... surface cover will help of course.
Click to expand...

Not sure I'm willing to take the risk. Open tanks has some disadvantages :/

But aesthetically they can't be beaten: 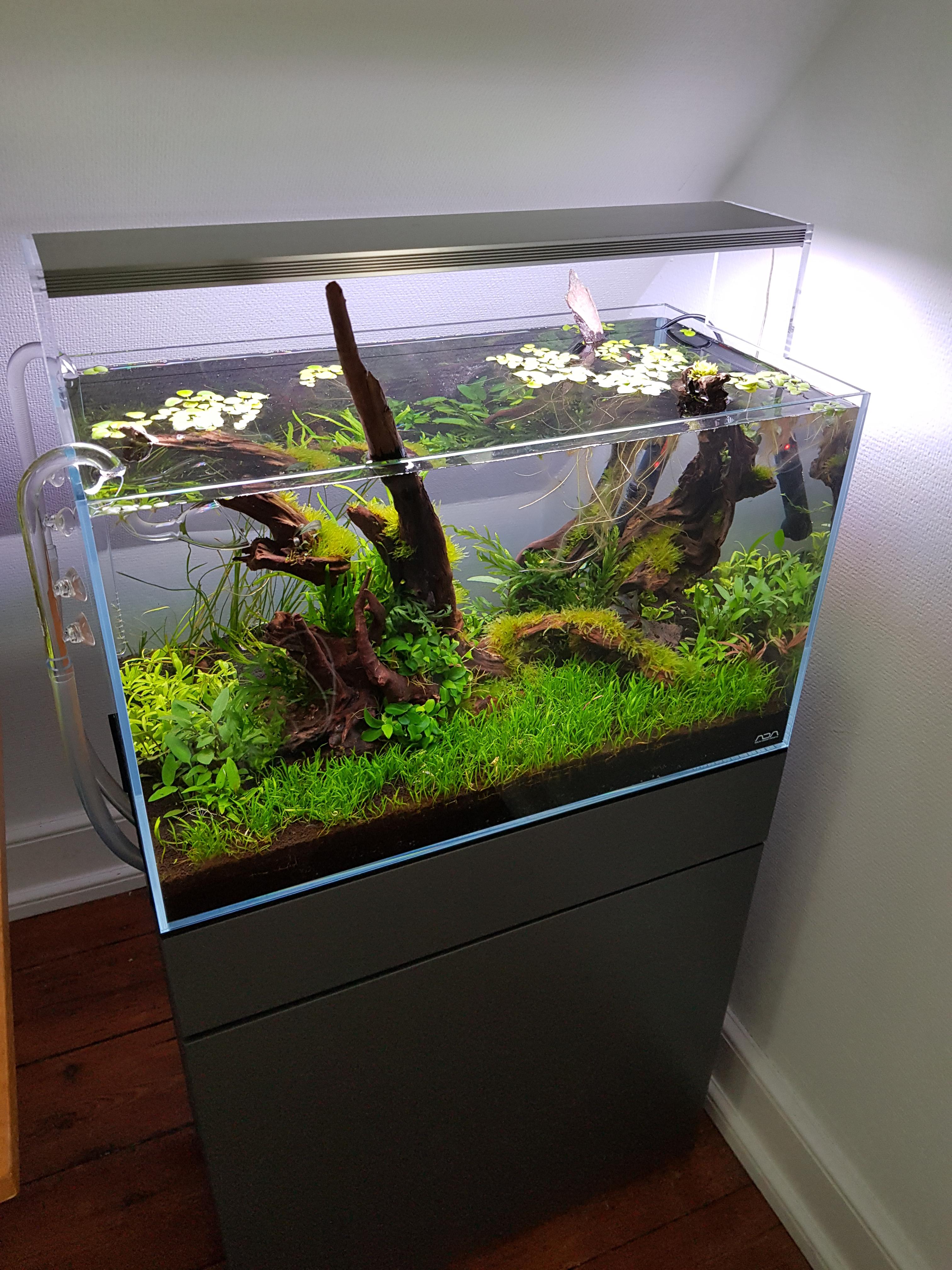 I'm curious to see how the moss will react to going from emersed to submerged growth. As you can see it became really yellow during the dry start. Possibly due to nitrogen limitation..?
Last edited: 9 Jun 2019

Looking good. Nice sized lily pipes, where did you get them from?

Tim Harrison said:
Looking good. Nice sized lily pipes, where did you get them from?
Click to expand...

Thanks Tim. The brand is Aqua Rebell and the model is OF2 for the outflow and IF2 for the inlet. I bought them via aquasabi. Can't get the suction cups to stick unfortunately and I'm actually thinking of trying out some metal lily pipes in the future.

JEK said:
As you can see it became really yellow during the dry start. Possibly due to nitrogen limitation..?
Click to expand...

It is unlikely to be nitrogen, but if it is you should get a very quick greening now the tank is flooded.

Light levels would be my guess, most mosses go <"more "golden" in higher light">.

dw1305 said:
Hi all, It is unlikely to be nitrogen, but if it is you should get a very quick greening now the tank is flooded.

Light levels would be my guess, most mosses go <"more "golden" in higher light">.

That could be it! I had high light in the beginning, but I lowered it quite a bit the last few weeks before flooding though.
The difference is between the emersed and submerged moss is striking. 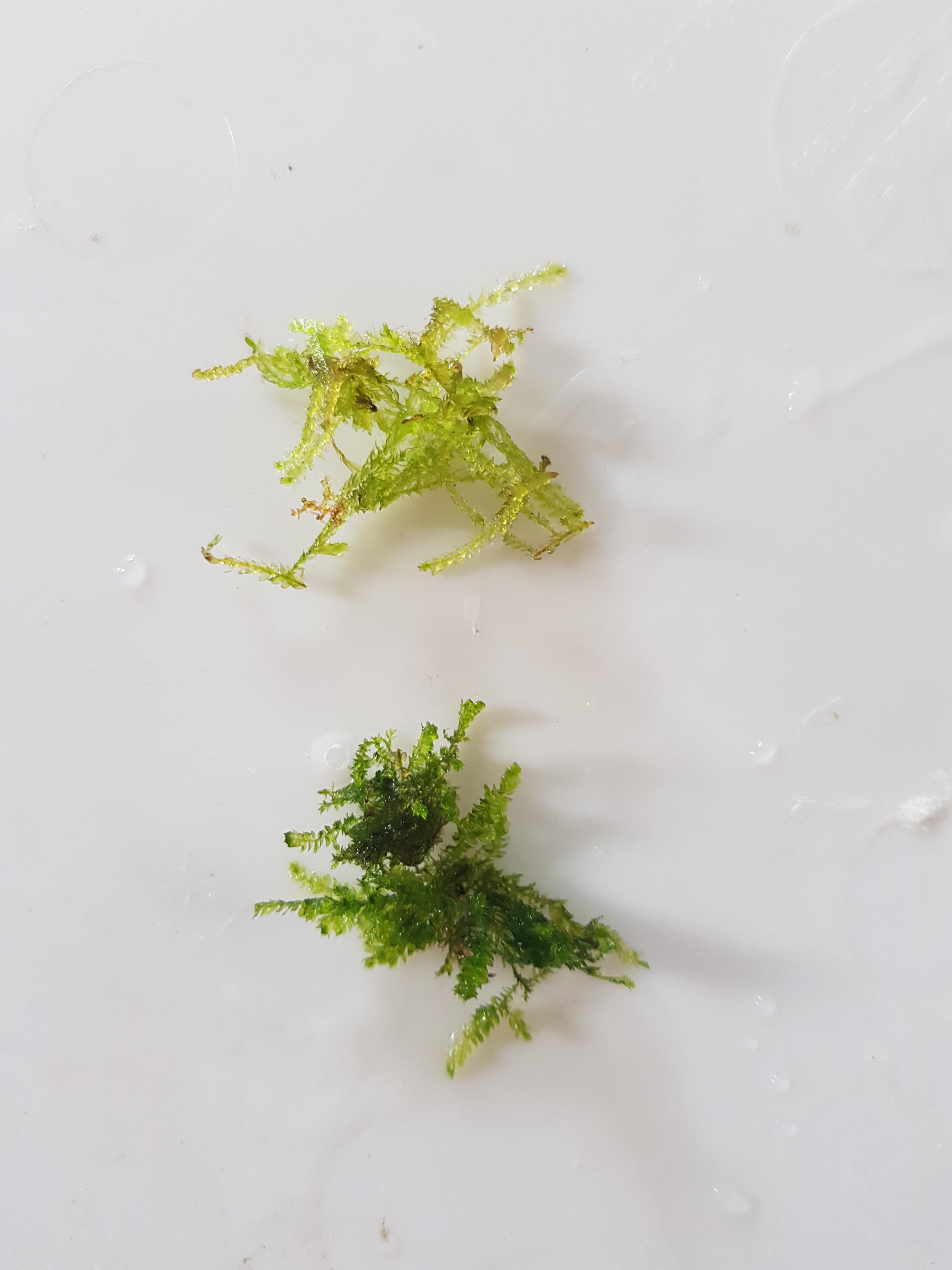 Top is weeping moss that was grown emersed until three days ago and bottom is the same species from my other tank where it has been growing submerged for several months.
Last edited: 9 Jun 2019

Hi all,
This is a picture of the moss that used to grow around our pond from <"moss in the pond">). It would go green again in the winter. 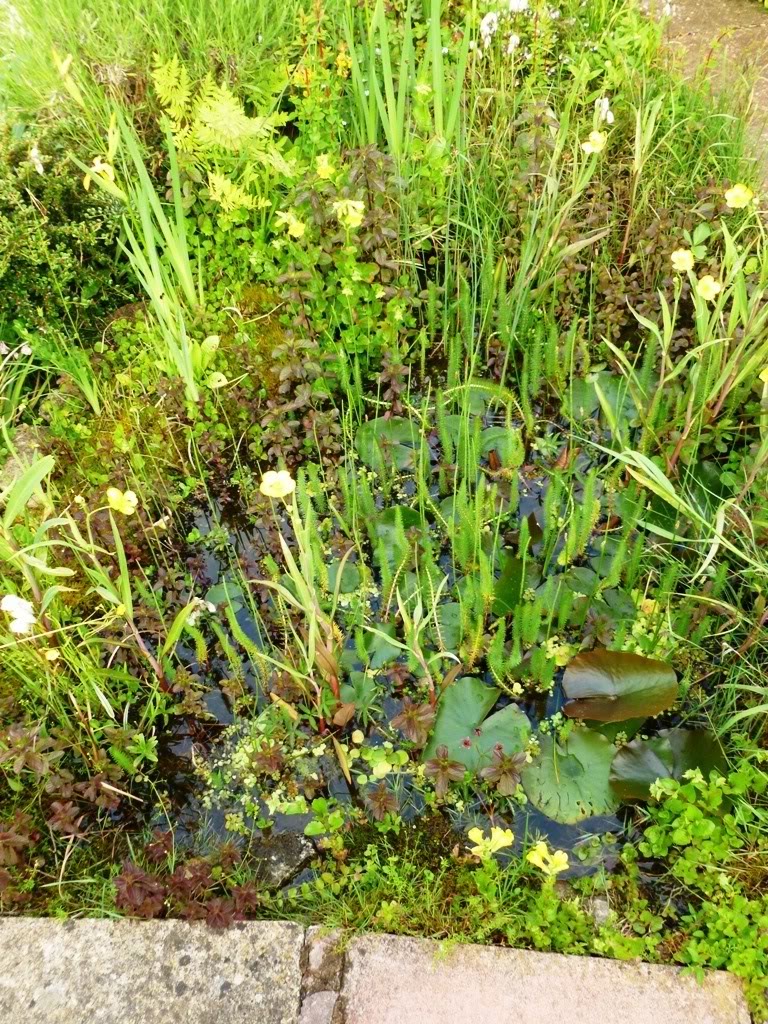 JEK said:
The difference is between the emersed and submerged moss is striking.
Click to expand...

A lot of them look a lot more similar to one another when they are submersed. Also they don't tend to produce capsules and it is usually the combination of <"leaf (microphyll) structure"> and capsule that you need to find the correct scientific name.

Marcel @zozo has tried a few terrestrial mosses submersed and they all tend to look fairly "stringy".

@dw1305 What a nice pond! It would be interesting to see whether there's a difference in the microphyll structure between the emersed and submerged form. Maybe I should bring some moss with me to uni and have a look..

dw1305 said:
Marcel @zozo has tried a few terrestrial mosses submersed and they all tend to look fairly "stringy".
Click to expand...

Yes, most indeed do. And i threw about all i could find in the tanks. I still have unidentified moss growing submersed that grows extremely small but in very long strings. At first glance i thought it was hair algae, but than taking it out i could feel the leaf structure like a saw blade. Looking closer its definitively a moss and i have absolute no idea where it originated from.

Few years ago i planted a few starmoss spp. submersed.. Found it in the sand under a tree.. Also this, first dies and it takes very long but will come back and grows submersed in a string form not even looking close to the terrestrial form growing on dry sands.

I made the typical colleceritis error, throwing to much together and swapping things from tank to tank.. I lost track completely and you only can take my word for it. I should have kept it more controlled to catalogue it, would have been intersting data collection.

Anyway, the experience convinced that most likely terrestrial moss is nothing but a grow form. and each moss spp. has both forms. I even wouldn't be surpriced if there are mosses catalogued in both forms clasified as a different spp. Its the most versatile plant form on earth,,

And lots of mosses like to grow together, than collecting one spp, from nature is no garantee it doesn't contain spores from another in its leaves.. Than it dies and a differnt one comes back. And the fairytale is born.
Last edited: 9 Jun 2019

@zozo that's really interesting. Mosses are such fascinating and beautiful organisms!
A

If you decide Apistograma or other dwarf cichlids, I’d establish other livestock first - especially if you want shrimp

Various small Dario species can do just fine without live foods - though you may need other tankmates to show them the way ... local shop has some nicely grown out (& slightly chubby) Dario sp. Myanmar at present
Unfortunately as is common with the “micro” Dario, all males
(note shop feeds decap brine shrimp eggs initially, then other small pellet type foods (high palatability) ... and there are likely some baby shrimp now and again)

And just because these are amazing fish if you can source them (mostly they are only affordable as small, grey fish and you’ll need to start with a group of 6)
Dicrossus filamentosus
Last edited: 10 Jun 2019

Currently i have some intersting things going on in this setup. 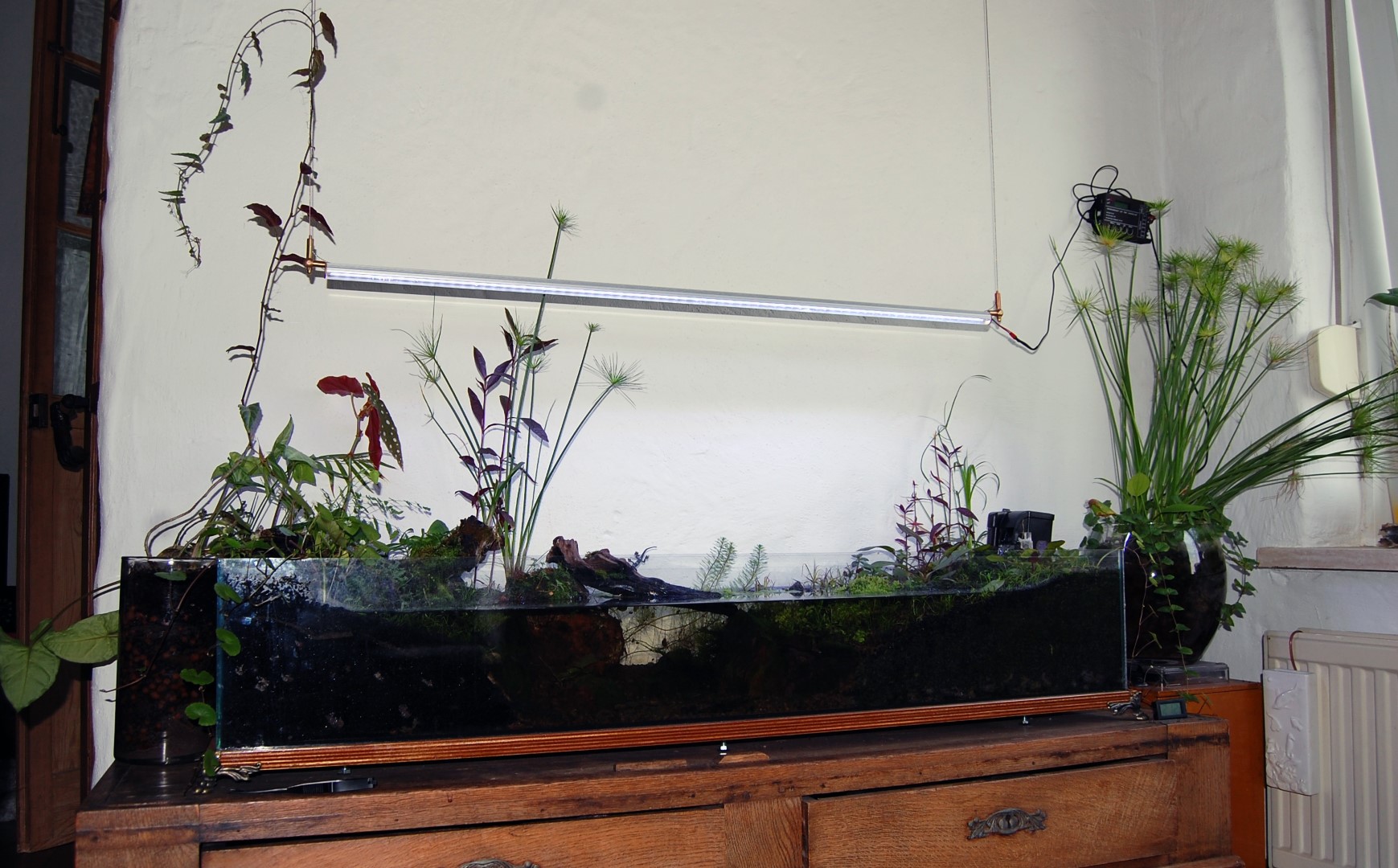 It contains a number of mosses randomly collected from nature and it contains some wood pieces i left in the garden for a few years growing mosses on its own devices. Now its indoors in a totaly different condition and see grow form changes comming up.

Here a moss growing at the waters edge, the terrestrial form grows bright green and no taller than a few mm. At the black colored substrate, now a lot of water evaporated, need to top off again, but most times its completely submersed with the water about an inch higher and what creeps into the water is stringy and darker green. This are already 2 form changes vissible. 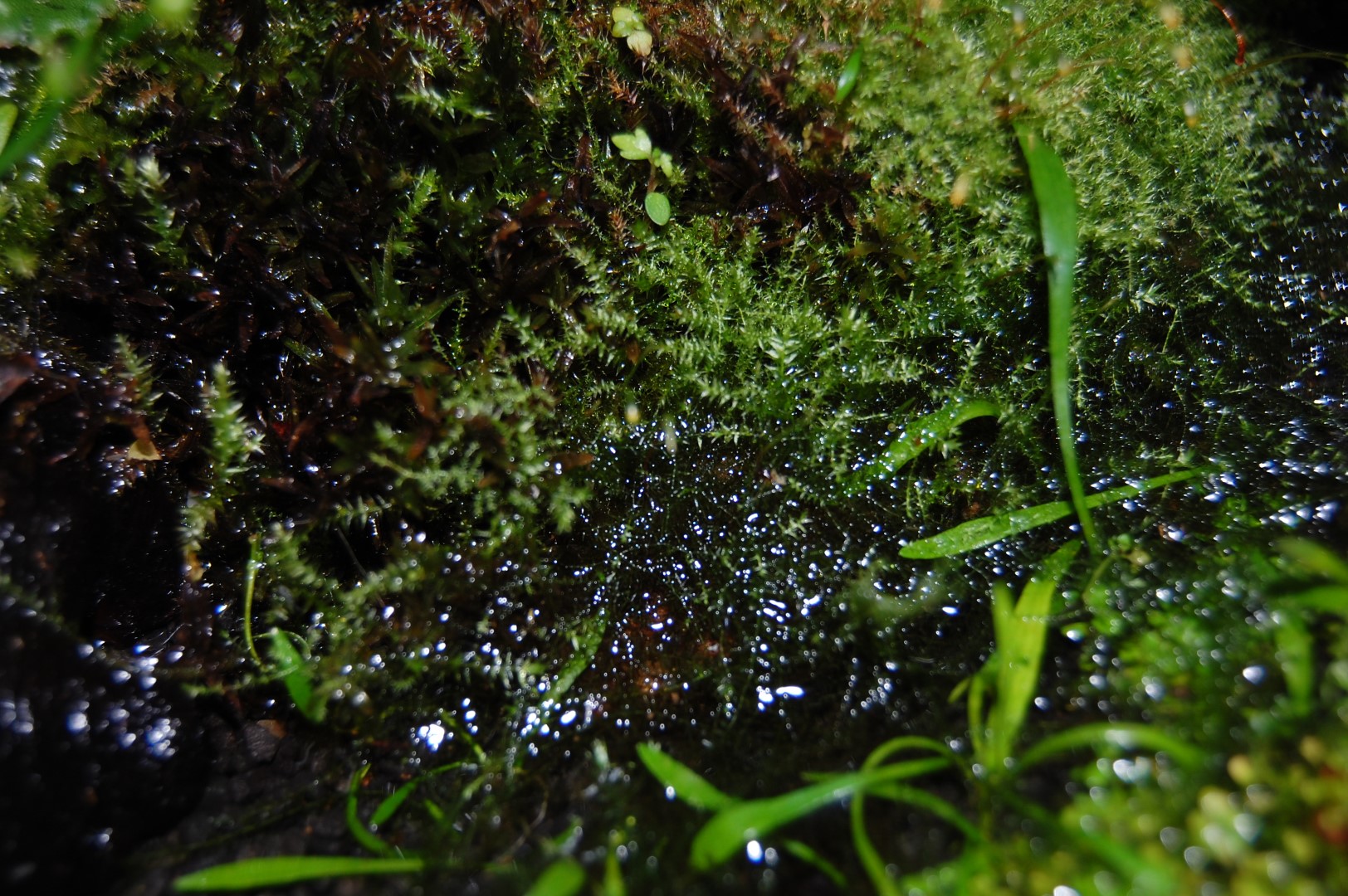 This is over 5 cm away from its originating batch growing into the water, bellow the water level over the substrate you can see it creeping on even further beyond the pictures frame. 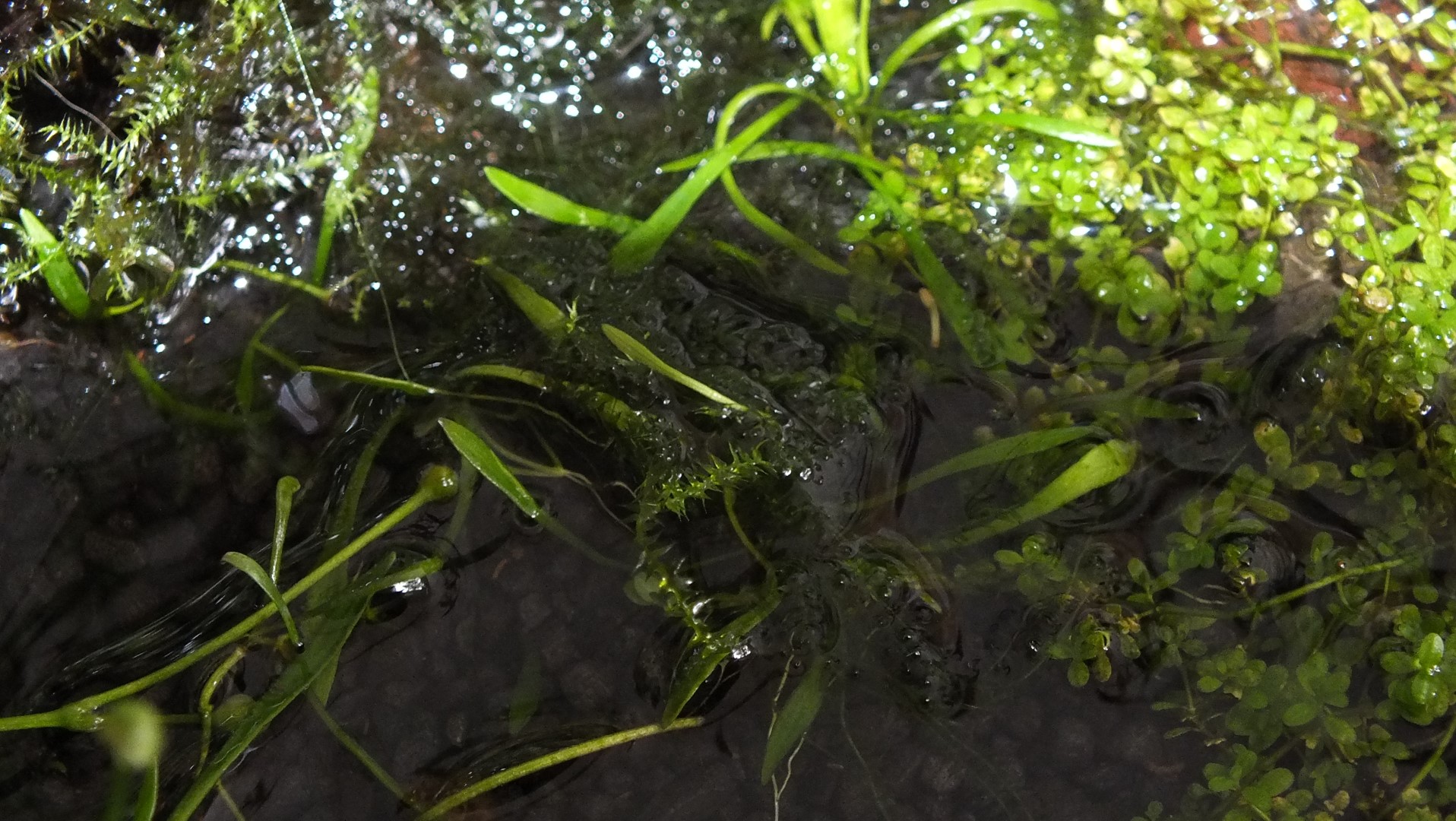 This i previously thought its a different one, because it was even smaller looking like a velvet carpet when i collected it. Either younger or a different conditon. It grew a bit since it is in here and now turns into a smaller look a like of the above moss. And also this is creeping on stringy into the water. But it developed spore caps the other yet not has growen. 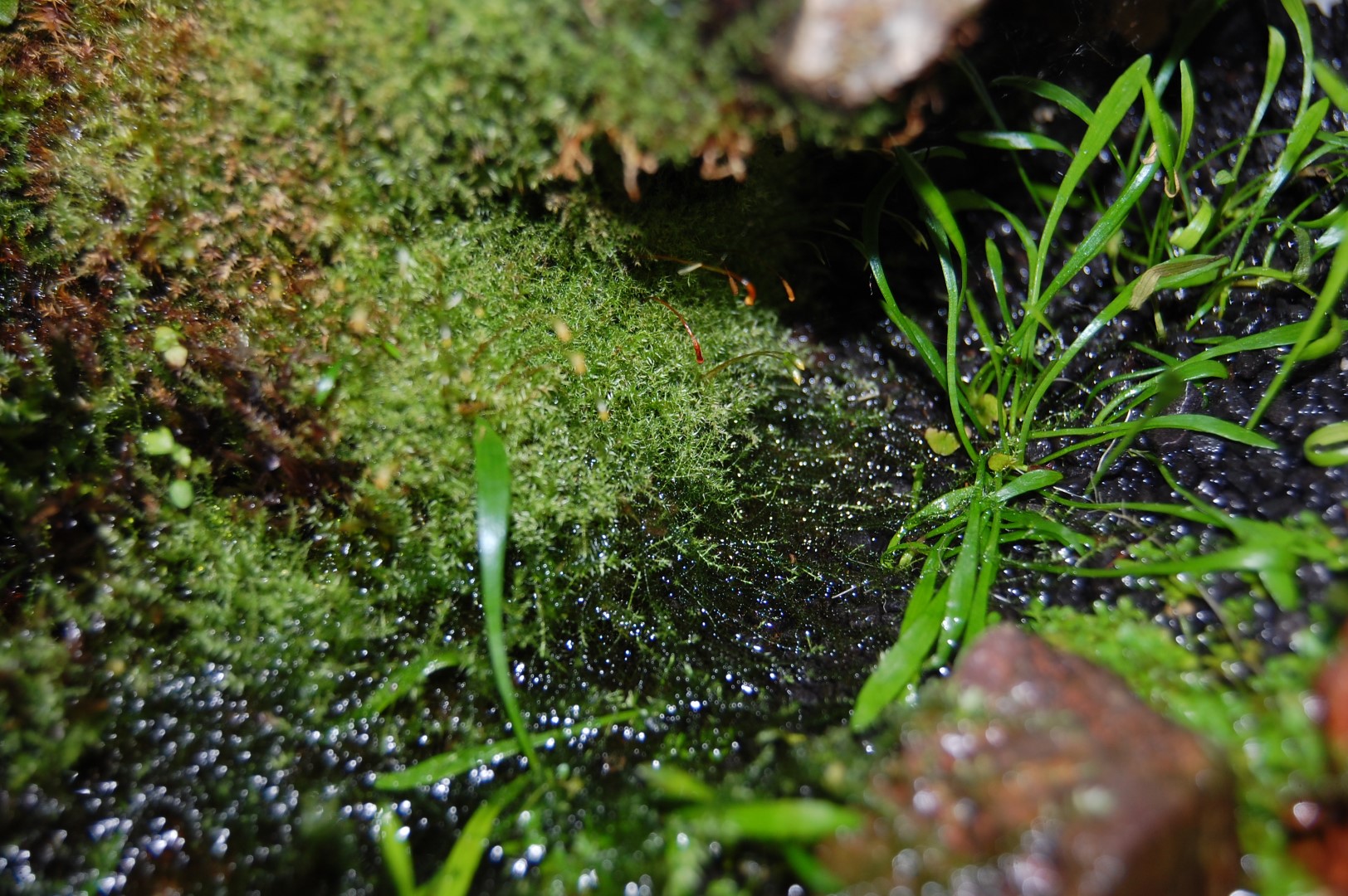 It is as if i see 3 different forms transitioning from 3 different conditions. From a shaded spot in the forest, to a damp indor invironment into water.
But than again, i'm not realy qualified enough to make the statement it's the same moss. I have brought home patches of 3 differnt moss sp. growing entangled with eachother. What more is in there?

This one is also interesting, found it growing on top of a large silica coble that was actualy in a relative dry spot. When i found it it was bright green with almost yellow tips, fat and fluffy. Now after a few months in this spot it changed, the brown tips is whats left of the fat fluffy stuf. it is shrinking, changing color and what touches the water grows on but yet not realy stringy, not creeping over the substrate and more compact and firm as if it keeps its tips above the water line.. This moss is showing transition in 3 different forms in different condition in a rather short periode of months. 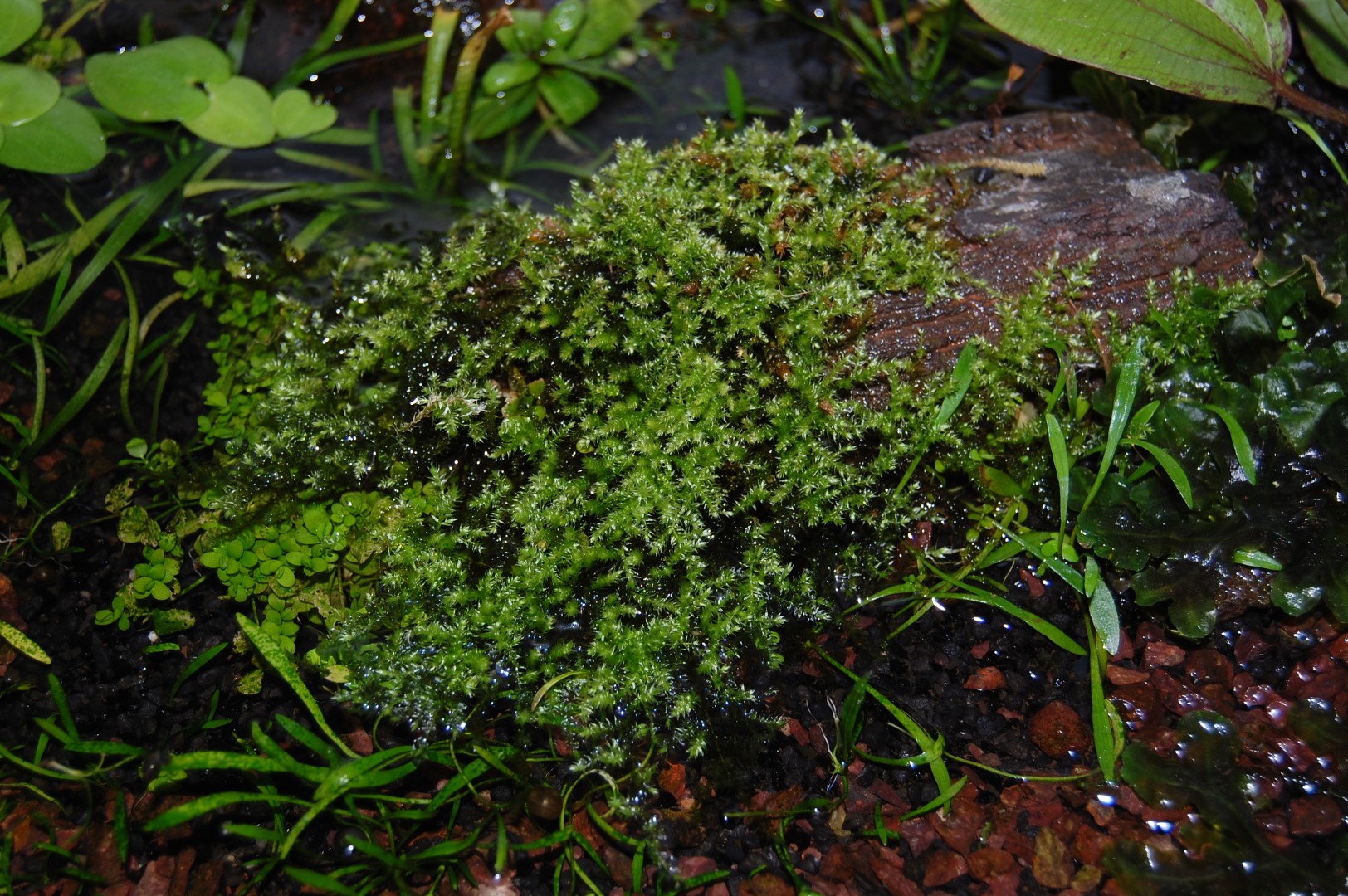 This is how it looked teh day a found it. Far away from water.. 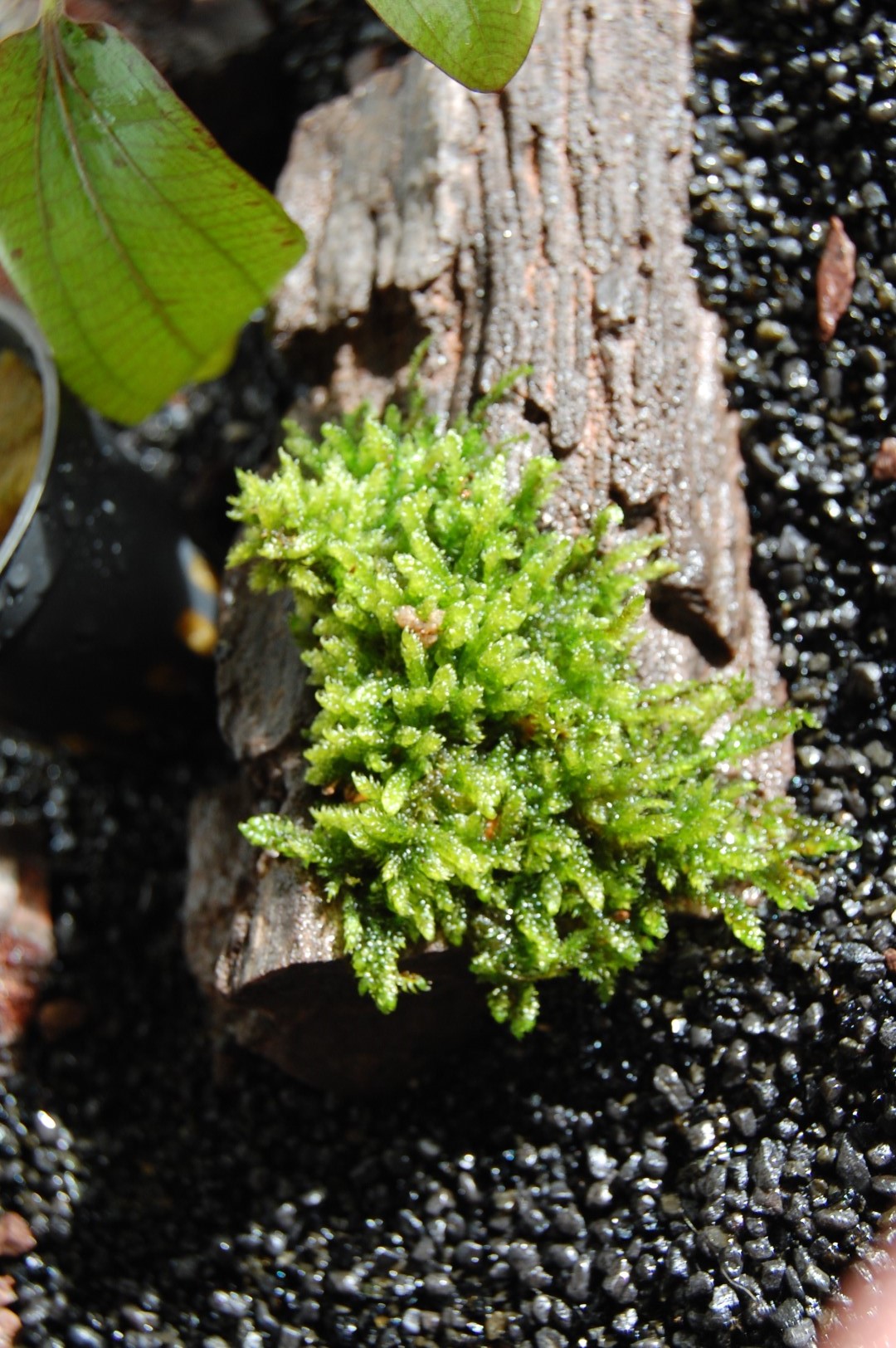 Also planted star moss species in there that are looking bad now. But??? Exciting.. Nut sure moss can die.. It more likely is real yet undiscovered fountain of yought living forever.

@alto thanks for the info and suggestions. Those dario sp myanmar looks absolutely stunning! I love dicrossus, but I almost think they deserve a blackwater biotope to really shine..
Thinking of A borelli at the moment, but that is subject to change. I'll follow your advice and start with establishing a shrimp population if I choose to go with dwarf cichlids.
Last edited: 10 Jun 2019
You must log in or register to reply here.
Share:
Facebook Twitter Reddit Pinterest Tumblr WhatsApp Email Share Link