Well 2020 has been quite the year hasn't it! It's been almost as bad for me and my aquariums!

Around May I dug out an old 35L tank from the loft and had a go at my first High Tech tank for a few years, and after a HUGE battle with Hair Algae (which I mostly, nope, DEFINTELY lost, until I did a re-scape) this tank also sprung a leak and flooded my lounge!

So I decided to get another tank and hope and pray for no more leaks! Especially as this is brand new.
As a result of my hair algae battle, I thought it best to start a journal on here, and hopefully any problems can be picked up nice and early, and even more hopefully, I can rectify them before they get out of control. I'm definitely the weak link in all of my aquarium problems haha.


I'm currently in the process of carrying out my PH Profile (Measuring PH every 30 minutes between 14:00 and 00:00), and my results at the time of completing this journal entry are as follows.
PH Stable at 7.2 until lights on.
PH drops until it levels off at 6.0-6.2 which also coincides with when lights turn on.
PH remains profile during lighting period, as far as I can tell. PH6.0 is the lowest my test kit reads, so I'm a tad concerned that my PH may be lower, and therefore difficult to detect on PH test kit.
I do have two drop checkers in the tank, in different positions (high and low) at end of tank (Filter inlet/outlet side). One is showing lime green, the other whilst green, isn't lime green. These are made by different companies, and I've used their respective indicator fluid, this may account for slight difference in colouration, or it could be down to position... too early to determine just yet.

Lessons learned from last tank....
Expectations and short term plans for this tank...
Anyway, here is a couple of pics of new tank... would love to get some thoughts/advice/feedback etc. Apologies for poor phone pics, will upload better photos from the big camera as and when tank matures. 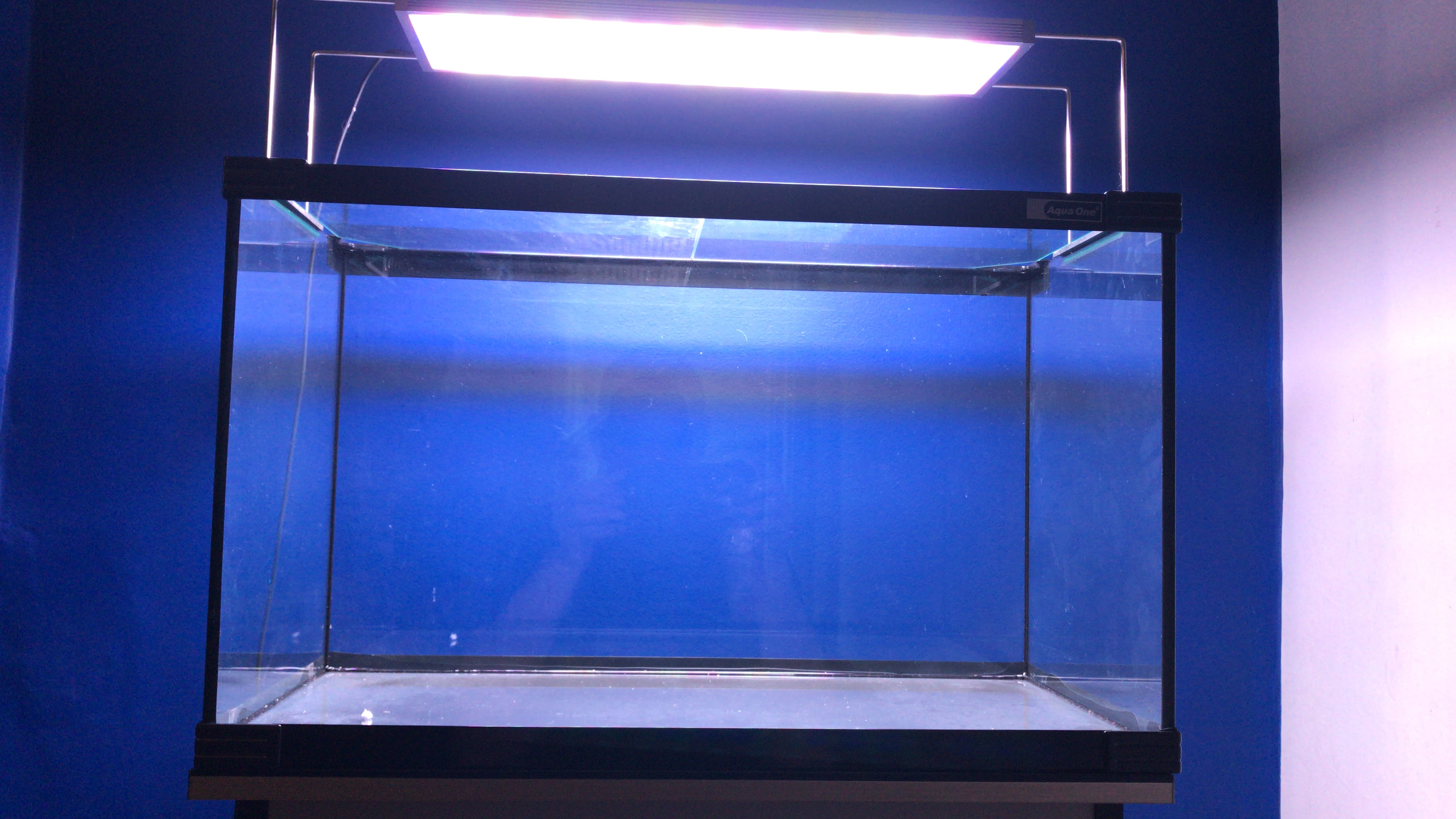 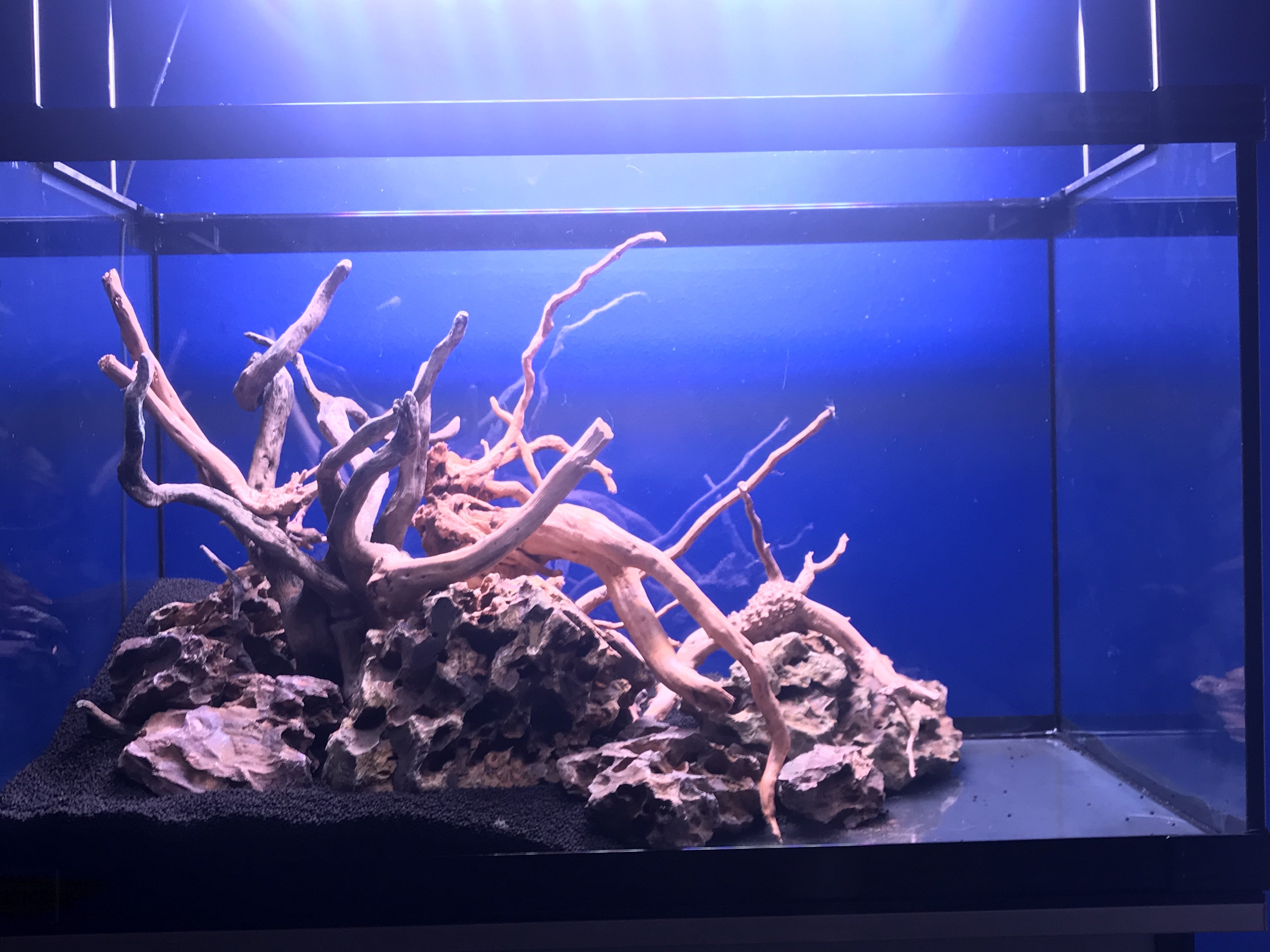 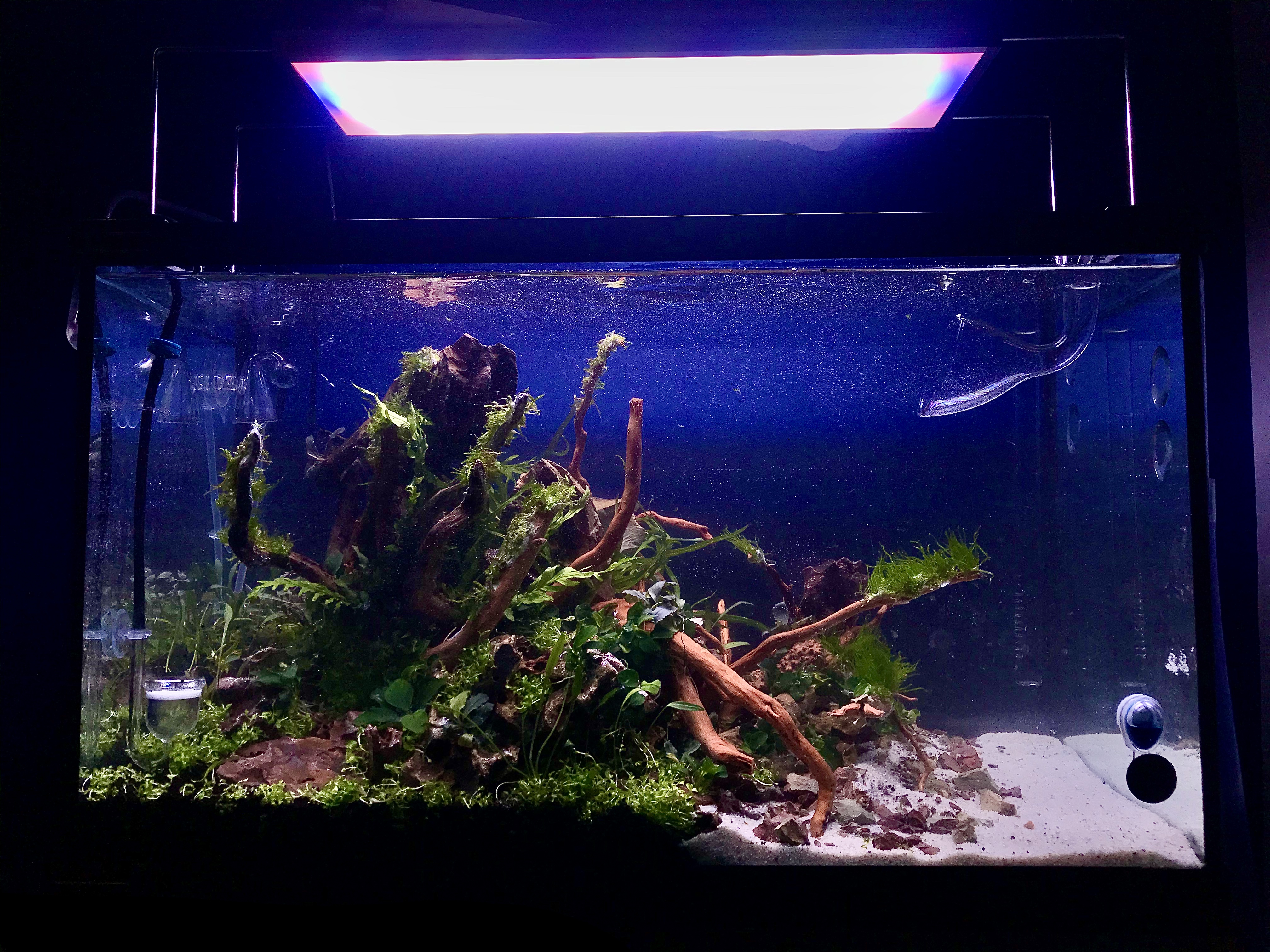 PARAGUAY said:
Just my own observation if you can get CO2 to have good flow around all the tank hair algae wont be a problem Great start ever considered a couple of juvenile SAEs as algae crew
Click to expand...

I have considered them, but never bothered with them, mainly because I wouldn't have anywhere to put them when they get too big.
I normally have Otos in my tanks, but I'd like to have more fish swimming around, so this time I'm going to plump for snails and shrimp as clean up crew and then a decent school of small fish.

Well, I'l almost a week in, so far no dramas.

Updates
I noticed that bubbles from ceramic diffuser were quite large, and due to discrepancy between drop checkers, was concerned that the bubbles being too big was preventing proper dilution of CO2 into the water column. It appears that I have sufficient flow & circulation, so have changed to an in-line diffuser, which resulted in a further two days re-dialling in CO2.

I've also added 5No Amano Shrimo and 5No Nerite snails. My water parameters seem fine, 0 detectable ammonia, or nitrites, so thought it prudent to introduce snails and hardy shrimp as soon as possible.


Concerns
I'm a bit concerned that something isn't quite going right. My Blyxa Japonica at the rear of the tank, and a small portion along the LHS glass appear to be melting, with very little sign of recovery.
I'm also experience considerable melting of my Monte Carlo along the front of the tank. This area, incidentally, seems to be receiving some of the better flow in the tank.
I've also got a couple of melting Anubis and Bucephalandra leaves around the same area of the tank as the Monte Carlo.
I also have a bolbitis leaf that has changed colour for a small section of it's leaf. A large portion of the middle of the leaf is turning a darker shade of green. Can't tell if melting, or just a colour change.
Note: Monte Carlo and Blyxa were Tropica 1-2-Grow Pots.

Positive
Overall I'm noticing good new growth on most plants, or if not growth, no obvious signs of problems for the majority of plants.
Most growth on my Ludwigia Super Red.
Shrimp & Snails so far looking healthy with no issues.

I'm not sure what might be causing my melting, so thoughts and comments appreciated.

Current PH Profile - 7.2 Before lights on, steady drop from lights on for two hours to around 6.2-6.4 where PH remains steady for lighting duration.
Lights on at 5:30 ramping up to 70% intensity by 6PM, and the reverse happening at 11-11:30PM - total lights on for 6 hours including ramp up/down).
0 Detectable Ammonia or Nitrites
Not measure Nitrates but I've added 10ppm nitrates in past two days, after water changes.
I have been dosing 5ml of Excel Flourish so is it possible that too much flourish could have an adverse affect on Bucephalandra and Monte Carlo?

Pictures below to illustrate current state of some plants.

Edit: I've tested my Nitrates just to check if I'm actually adding enough ferts, and my test kit barely showed 1ppm. If I've got my EI recipe correct, I should have added 5ppm with todays dose. I know not to read too much into test kits, but to still read so low on my nitrates could suggest I'm not adding enough ferts, so from tomorrow will start double dosing my macros to see if that has a positive impact.

Last edited: 14 Oct 2020
You must log in or register to reply here.
Similar threads