Journal A nursery for my Carinotetraodon Travancoricus.

If your tap water is soft, I find H micrathemoides is much more forgiving than Rotala rotundifolia or Rotala ‘Green’ (which really prefers CO2 to thrive, though it can linger on) re light and nutrients
It won’t have the dense/broader leaf seen in high tech set ups (with CO2) - more a slender leaf with longer internode distance and more delicate stem

Got a load of red ramshorn snails if youre interested, to add to the snail farm
Just pay postage, royal mail bit unreliable at the mo , even first class, bit if you want to give it a try let me know
Steve

@Steve Buce That would be awesome, I'll PM!

As for a minor update, doubling the dose has seen algae in the tank multiply, but the new growth in the Rotala is vibrant and it has shot up a few centimetres. Doubling every other day is certainly too much, so I will scale back slightly - double dose once a week, maintain a single daily dose after. Lights are getting reduced by 10% too back to 60%. I will start to explore different stems too, adding Pogostemon erectus most likely. I wouldn't mind doing a blackout soon too.

About 2 months, or 9 week update 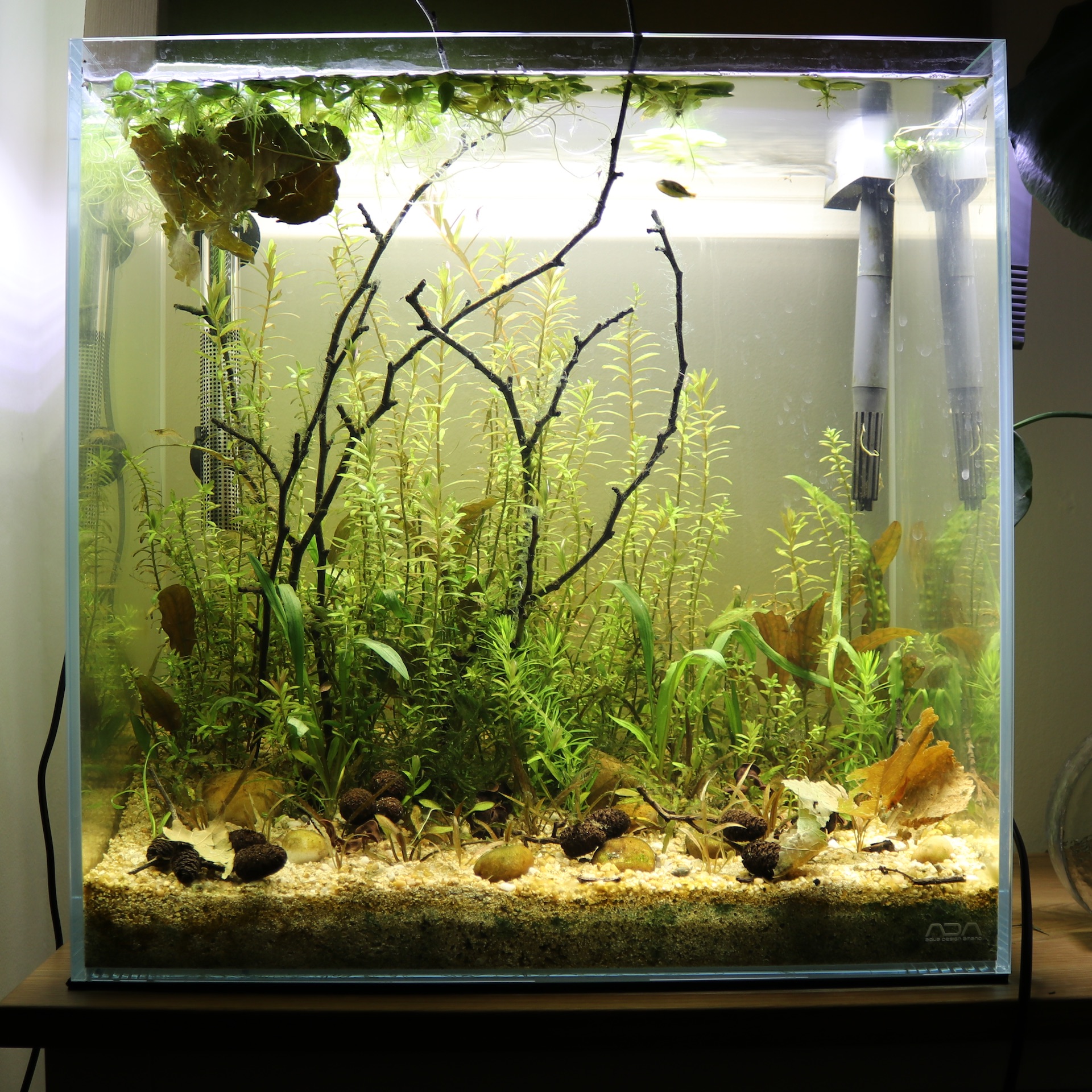 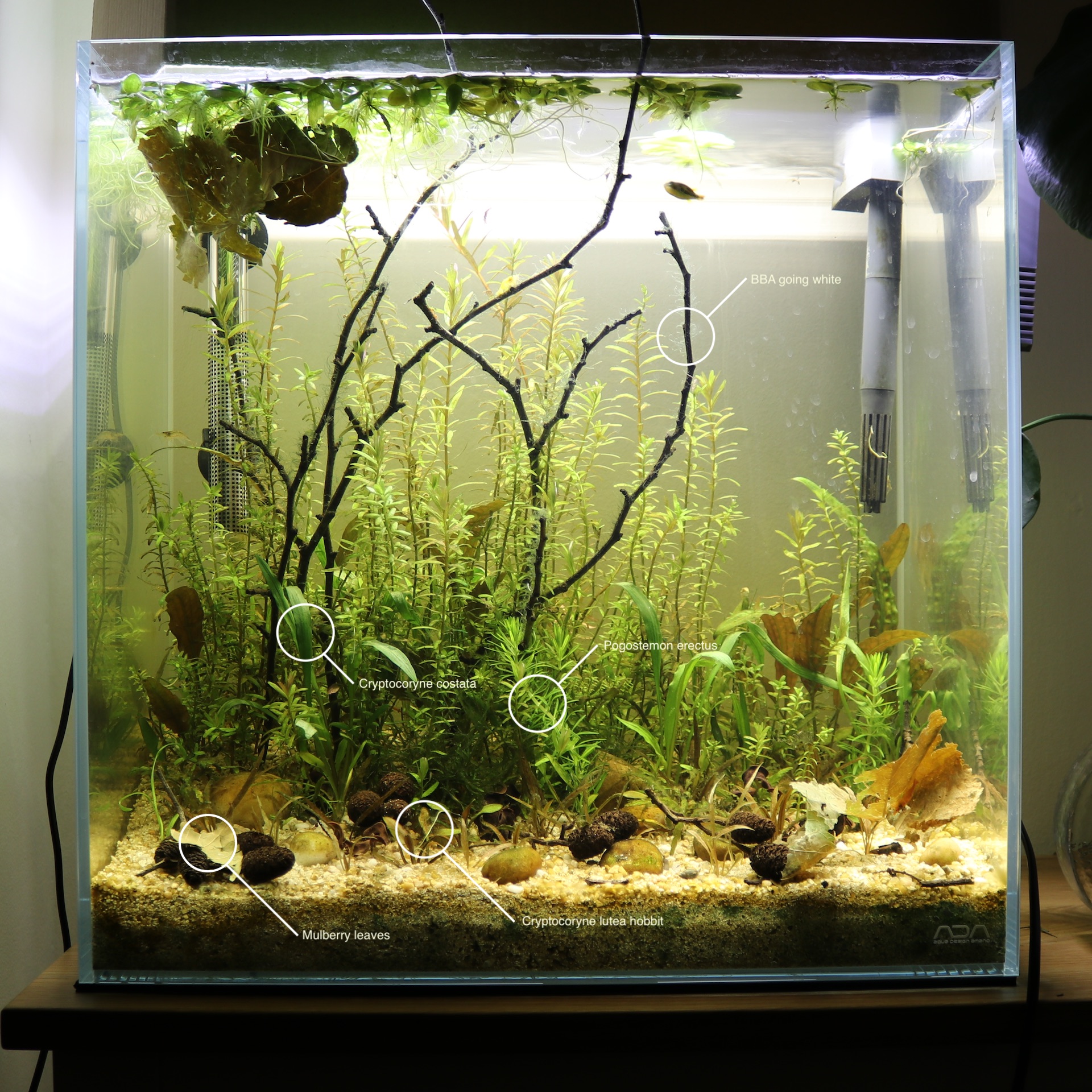 I can’t say what’s killing the BBA, but plant growth has shot up and the Cryptocorynes in the tank - especially the Usteriana - are putting out some serious growth. Rotala is at the surface. I have also carried out a major water change in the last week, which is effectively a 100% water change - I remove 10L to a bucket for the inhabitants, drain the tank, refill the tank, drain the tank again and then refill. Trying to hit the BGA hard, but BBA may have taken the brunt (and I’m not bothered by BBA at all, annoyingly). 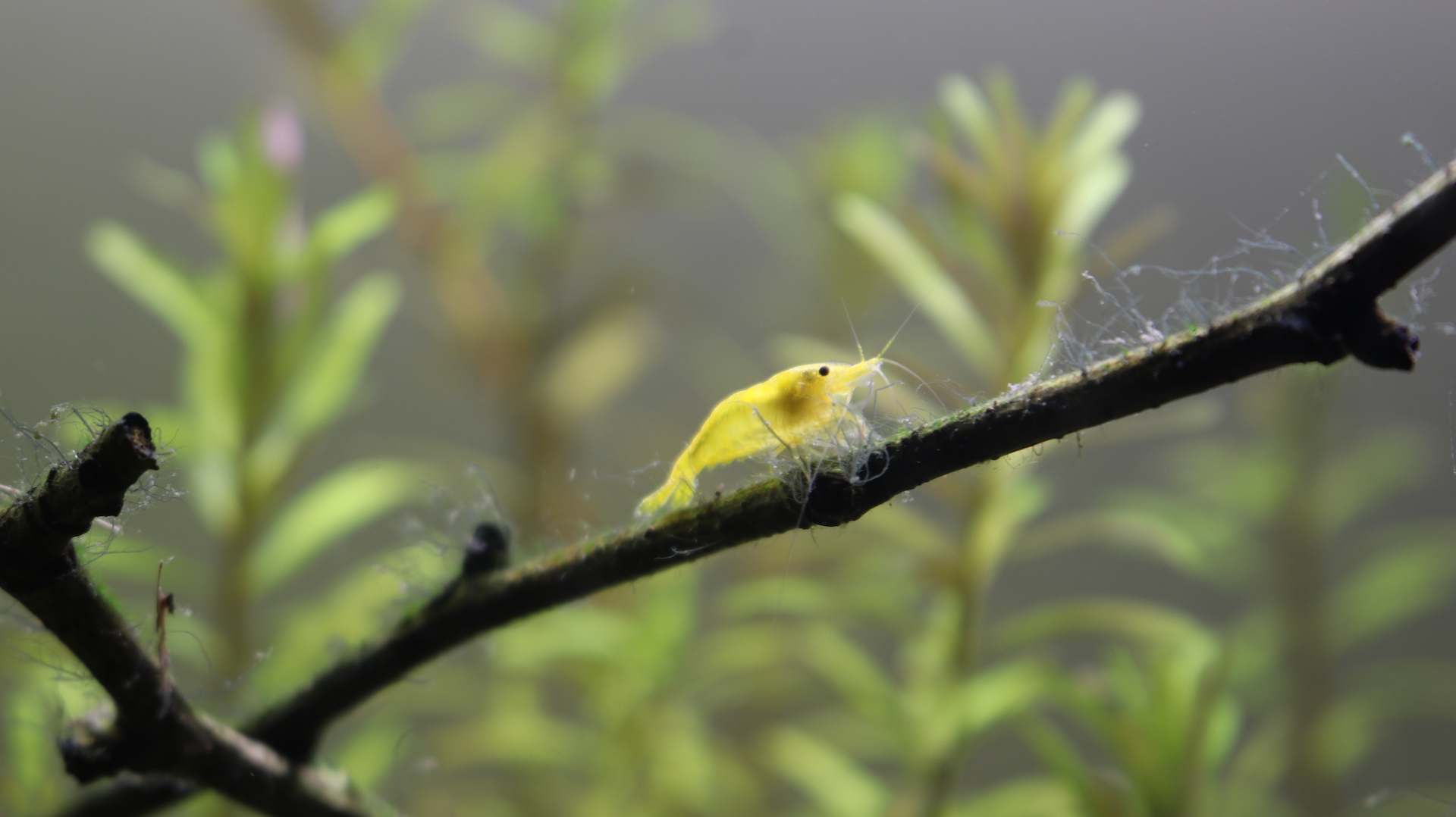 
The aquarium now has a stained look, but that’s fine - comes from the alder cones.

As for the female, she’s been rejecting frozen food.

All in all, looking OK. I don’t think I’ll be adding any more plants now, but I will be adding some root tabs to the front left and mid. Slowly replanting Rotala on the right too.

Female has put on some weight, but only eating live food. Snails aren't breeding fast enough. I went to my local stream took a jar of water to speed up a bucket outside - that worked well, so I do have some bugs on ready. I know the dangers of this.

I've ordered two more plants to try as Pogostemon erectus melted to nothing, and Hygrophila pinnatifida has all but gone.

The new plants on route are:

I'm hoping they do alright, as I'm placing them throughout the front of the tank. Well, in front of the main body. It’s a low light tank in some parts, especially where they’ll be. I also have no idea how big these plants grow.

I'm at odds with the aquarium at the moment, it’s just not quite the jungle I want it to be, and there is far too much foreground, in the future I’d plant far more heavily and cover 90% of the tank - also, a reason why I bought the above. I can’t quite get away with moss yet as BGA is still about, but minor. But I think I may risk it in August and moss up some stones in a propagator and add them in September. I like how it looked with some moss in the tank.

There was a lot of waste in the tank today, I think one of the mulberry leaves got a bit too degraded and turned to mush. I wonder do those "leaves and sticks" tanks have all their mulm sucked away during water changes? Build up of it can't be great, even thought I know it's a food source.

Ime C.purpurea will get quite tall under lower light levels.
Usteriana is a bit of a beast,I'm finding it too much in a 180lt tank,the runners it throws out are unbelievable and they tend to disturb plants around them.

I have no doubt Usteriana will have to be cut back hard one day, but I think that day is still a few months away - growing well for me, but I know it's going to reach the top and throw some shade. Rotala will probably be at it's end when that happens.

Well, I can give C.purpurea a chance, if it grows huge I will just remove it I guess =/ 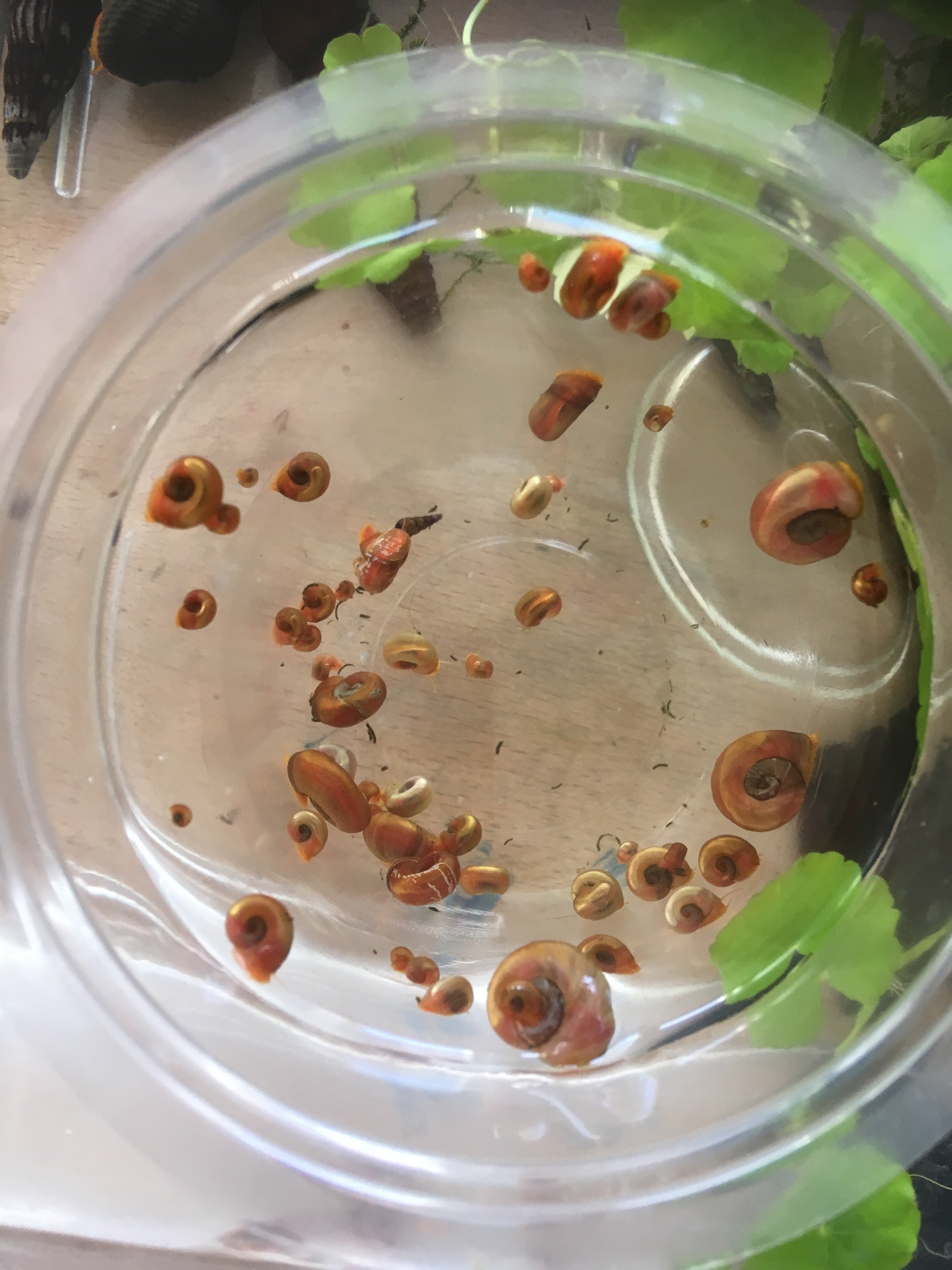