Adventures with my 15l baby biorb for plants and shrimp

Thought I’d share some of the things I’ve been doing with my baby biorb over the last few months in case it’s useful for anyone else thinking of doing the same, and who is approaching this as a total beginner like me. I started with basically no idea what I was doing, and am still learning so this is a very non-technical account of what I’ve been through.

About 10 years ago I got the Baby Biorb in the classic ‘I’d like something small with a couple of fish’ = buy something not suitable for the fish you have bought = dead fish, feelings of guilt (esp when I read some of the stuff on the fish fora/forums) = giving up.

SO in July I dug it out, spent hours reading things in the internet (and ukaps definitely seems to me to talk the most sense on lots of things), and have had a go at a planted tank with the aim of keeping shrimp... I thought spending a bit out in the hope of something nice was better than sending it to landfill.

JULY
Set it up as out of the box (central bubble tube thing over sponge filter, stones/clinker-y media in base).
LED in lid - a pleasant warm colour. Good for human mood, but turns out probably less good for plants esp. I suspect java fern.
Went to my nearest aquatics place who had just reopened, and the very useful man advised me to get some bogwood and a couple of what I now know are epiphytes (java fern, and anubias). 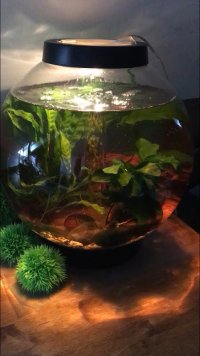 Everything runs pretty well. Apart from going really brown from the bogwood - but this went eventually, even though I’d presoaked the wood. I get an API master test kit (and later KH and GH kit), test things, observe, obsess about getting a lower ph for the future shrimp, since the internet tells me the ph of my tap is too high for Neocaridina. I know now I probably didn’t need to do all this, but watching measurements change and learning about what changes water parameters has all been really useful nonetheless.

I start using rainwater remineralised with Salty Shrimp cut with tap water for changes, about once a week, and doing a rudimentary clean (it’s REALLY hard to get in and get the filter out once you’ve got bogwood and plants, especially since the top opening is so narrow). Java fern looks a bit unhappy, but it’s all doing ok. Anubias is growing pretty well. The clinker is forming a light brown proto-earthy stuff which I mostly leave in the tank.

SEPTEMBER
11 cherry shrimp arrive from a very friendly seller on eBay. They spend an extra night at the sorting office, but all make it to the tank. They do a great job of munching through the small amount of algae and cleaning up. I don’t feed them. (Interestingly there’s never really been much algae in this tank.) 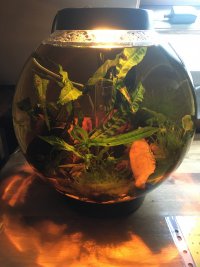 I do add some worryingly cheap catappa leaves from amazon - but there is nothing visually wrong with them, and the shrimp like them - and add some java moss.
One of the shrimp came berried, and eventually produced the babies. I added a small interpet nano heater when the weather turned since I do not keep the house very warm - and the shrimp definitely do more with the heater on. The stuff on the clinker at the bottom, which I don’t hoover out, is doing no harm, and I think the shrimp munch it a bit. All fine, but slowly losing java fern.

... and on setting it up I realise just how dim the original led is.
The biorb has been a great experience, but there are too many frustrations with it, mostly (1) the limitations on not really being able to have soil plants, (2) the central filter bubble tube limiting usable space, (3) the opening being very tight to get in and do anything, even with long tweezers. The pump is also getting quite loud.

NOVEMBER
10 shrimp moved to the new tank. (I’m pretty proud of this - been set up about a month.)

There are at least 5 more shrimp plus another berried one left in the biorb. I might have lost some of the babies to the fIlter - I did put a bit of a pair of tights over it, but I just don’t know. BUT some of the babies definitely made it. I’m using the biorb too for trimmings from the other tank (and blimey, doesn’t frogbit grow?!). I’ve now turned the original filter off, and have stuck an Aquael pat filter mini in. I was hoping it would run stuck to the bowl, but it seems to want to be vertical so it’s just hanging. It’s also got a new brighter led. 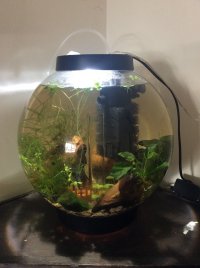 It’s not pretty, and frankly has made access even worse, but I’ll see how things go, and whether I can modify the lid to allow the filter to hang separately to the lid. There are a couple of anubias in it, a load of moss plus some small bacopa and hydrocotyle leucocephala cuttings. Everything in this tank and the new one is hopefully easy and non-fussy. I’m definitely low tech... I’m also now doing a feed every couple of days with Aquascaper (I can’t see that I’m ever going to have enough water volume to make EI dosing worth it).

The plan when I bought the filter was to ditch original filter and clinker substrate system entirely, and the bubble tube, and go to more normal soil/sand substrate, i.e. just use it as a bowl with a light.

Once I’ve moved the remaining shrimp out, I might do this, but try without the filter and just with a light and regular big water changes. I know terrarium is also an option, but much to my partner’s horror I do like having a second tank...

Anyway, that‘s the adventure so far. More to come.

(And thanks for the suggestions here https://www.ukaps.org/forum/threads...rb-other-than-the-local-tip.62677/post-618556
Thread 'Any other use for a biorb, other than the local tip'

I'm still yet to do anything with the 30... Just been to busy to start looking at it as yet...
But, I still think extend the air hose internally and run it up the inside of the bowl at the back, increase height of chosen substrate to increase surface area, use a regular sponge filter towards the back amongst tall stems. Maybe dwarf sag carpet the rest, or hydrocotyle or something
Usb air pump to run the air and a flexible usb led light, and it's a very low cost bowl

dcurzon said:
But, I still think extend the air hose internally and run it up the inside of the bowl at the back, increase height of chosen substrate to increase surface area, use a regular sponge filter towards the back amongst tall stems.
Click to expand...

Yeah...this is was totally what I was hoping to do in the end but then managed to buy *entirely the wrong kit*

(it’s been a long few months...) I think I’ve worked out what I need now, apart from what diameter of airline I might need.
USB is a nice idea - hadn’t thought about that. Thanks.
O

I've just started 30l Biorb, I removed the internal filter and epoxied an acrylic disc in the base to seal it. I've gone walstad style and swapped the original light for an Aquael Leddy Plant. THings are looking great so far, need to get some shrimp in soon to clean up the fungus / Algae!

So USB pump arrived today from AMAZON and I cannot hear the pump at all. I can hear the bubbles, but not the pump.
I attached it to this foam filter also from AMAZON
Actually, I opened it up, removed (cut away) the skinny tube that runs to the bottom of the pipe and installed an airstone into it. In all honesty I don't think I needed to do that at all so I'd not recommend doing that. I have it now bubbling away in a Poundland cocktail fishbowl. Filter could do with a touch more weight at the bottom perhaps, but its nice and small, and lets be honest, we're talking about 30l (for mine) and 15l (for yours) and much less once substrate is counted for

My hopefully-now-the-right pump arrives this week...

I'm interested in what you can come up with, it's great to bounce ideas!
I had a Eureka moment earlier regarding the filter, so much so that the bowl is up on my kitchen side and now running a (not quite finished) DIY filter to test... And it's past midnight !
Last edited: Tuesday at 12:12 AM
You must log in or register to reply here.
Similar threads