I have a dwarf lily (Nymphasea stellata) that I have been nipping off new stalks as I read that once floating leaves are formed, it’s unstoppable. But after seeing the floating leaves in this set up, it’s so cool that I want to experiment having a few floating leaves.

Is the process reversible, that is, if I start cutting off all floating leaves and new stalks, will it revert back to submerged form?

I guess that it will grow much quicker as it has access to atmospheric co2 and focus more energy on the floating leaves so there will be less submerged leaves but from what I know at least the new leaves will stay submerged until they can grow to the water surface.To "revert" just remove the floating leaves and yr new leaves will be "submerged"
This is based on just my observations of lotus in the wild so correct me if im wrong.

If the required light intensity is met to develop floaters it will send out floating leaves and flower stalks.
And then it's most likely a stored energy issue and size of the tuber if it maintains or stops making submerged form leaves.

In the garden i see my lilies grow both forms at the same time. But here i have large mature several years/decades old tubers the size of a fist. With several separate plants growing from its so-called growing eyes from the same rhizome.

If the tuber is still rather young and small it likely can not sustain both forms/several plants at the same time. At least that's how i experience and observe it in my aquariums and garden. If the light is strong enough young tubers shed the submerged form leaves and shoot out floater stems/leaves. At some point when the tuber stored enough energy to start to grow new young growth/plants vegetatively. That young plant will initially develop only submerged form.

Thus it's a matter of bombarding it with lots of light and feed it and wait for it to mature. Depending on the tuber size the plant can also grom much bigger leaves. Then it also can grow too big and isn't aquarium suitable any longer. For example, your N. Stellata that is a synonym for the tropical N. Nouchalli can grow 45cm round leaves at full maturity. A small aquarium suitable tuber can not sustain such large leaves thus it will grow significantly smaller for the first years to come. Then dwarf is more a synonym for young.

I had lilies in aquariums that took 4 years maturing to propagate vegetatively and show new young plants. And both forms simultaneously. It's a matter of time i guess that there is enough energy in the tuber to also make a floater from this. Than its waiting again for a new young plant to rise.
Last edited: 30 Nov 2019

Thanks for the explanation. Apparently, the growth habit is not simple as it varies with the light intensity and other variables. My light intensity is only around 60 PAR at the substrate, so probably not enough to trigger huge floating leaves and flowering, But I guess I have to experiment to find out, and as long as the growth habit can be reversed, it won’t do any harm to experiment, right?

tiger15 said:
it won’t do any harm to experiment, right?
Click to expand...

I guess not.. I didn't experiment very much myself. My indoor lilies have a dynamic natural light cycle.
And i see them floating during the summer and in a submerged form in the winter. Without the natural light they probably would never develop floaters. 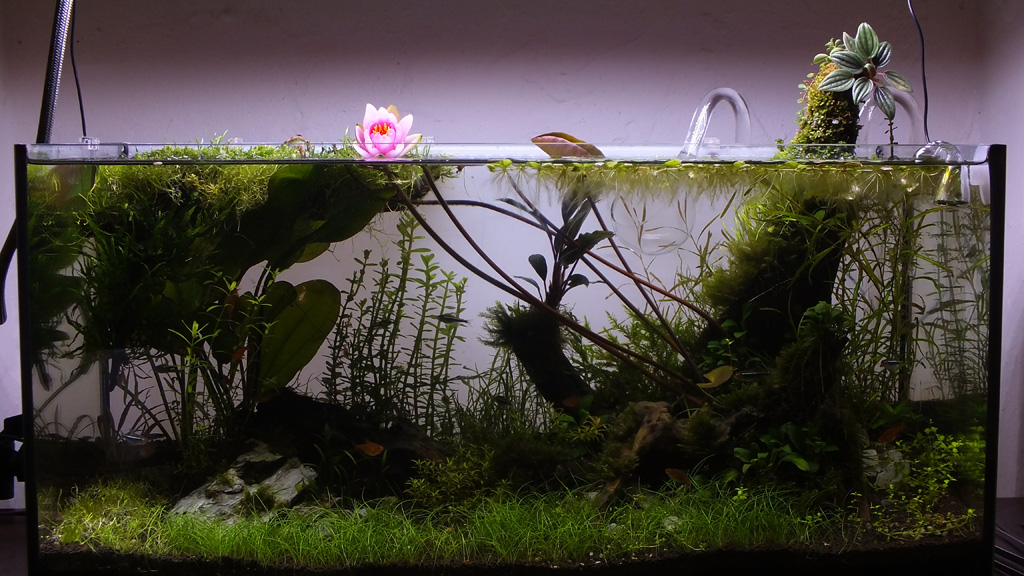 This was with CO², i never tried so much light without. And it only flowered once... What was really remarkable, the flower never fully opened up. And the tank stood next to an uncovered east-facing window. Since it was in November the sunrise at 9 am and sunset is 5 pm and the flower opened and closed with the outdoor cycle with the tank lights at 100% 9 am till 9 pm. Regardless of the tank lights she had here focus on the outdoor light cycle.

I have CO2 and the light intensity is actually lower at the water surface than quarter way below because I dont overhang light but instead placed submersible LEDs at or within couple inches above the water surface. As long as the submerged leaves won’t die off and I can reverse the growth habit, I’ll let a few floating leaves to emerge to see how it goes. If the floating leaves block off too much light, I’ll just chop off some floating leaves leaving the stalks sticking up as they look cool and provide vertical dimension.

So I experiment letting the lily to form floating leaves. In about 3 weeks, I got 4 floating leaves, and two more are coming up. I have two bulbs and each sends out a new runner every week. What’s remarkable is that the the runners are getting longer than needed to reach the surface and continue to elongate. As a result, the floating leaves are mobile, changing positions slowly but constantly swinging from one side of the tank to another as if it has trouble finding the surface. I guess my lighting configuration confuses the plant as the highest light intensity is below the surface, not at the surface.

tiger15 said:
What’s remarkable is that the the runners are getting longer than needed to reach the surface and continue to elongate.
Click to expand...

That is most likely the flow in the tank causing this. In stagnant waters, it stops when it reaches the surface.
In a small aquarium, considering that ½ square metre water surface in a 250-litre tank still is very small in comparing. Then the leaves are to close to the filter outlet. The flow is constantly stressing and dragging the leave under the surface. Probably signalling to the plant it still isn't fully there and triggers it to keep growing the stem.

I experienced the same and definitively see the difference whit the same plant growing in stagnant condition. If there is relative to much flow it keeps growing the stem till the leaves end up to the glass or against another obstacle so it can't go anywhere else. That changing position is as if the plant is trying to feel and sense the correct spot to rest its leave. Like a stress symptom?. It's not what it wants, it prefers stagnant water.

There is more to plants then meets the eye. Some seem to have a mind, or at least an environmental awareness. Lily and Echinodorus are plant species that definitively do. They sense and act accordingly. I guess all do in away. But with these 2 it's more obvious to observe.

There roams a video around here on the forum, submerged shots from a African water in flood season. Quite heavy flow with lots of lilies growing in it. All have metre long stems with floating leaves waving in the current. Some shredded to pieces.
Last edited: 17 Dec 2019

I once had a flowering lily in a 60-litre aquarium. Same story. And when it flowered also the stem from the flower bud kept growing longer and longer with a semi submerged but closed flower bud. One day in the early morning i noticed that all floating leaves changed position towards the flower bud. As if they were trying to create a shield around her, so she could erect over the surface and open. I had to help a little and tied the flower bud with some thread to a piece of emersed wood. The day after it opened up. And it finally stopped growing its stem.

It sounds like a fable. They talk but not in spooken words unfortunately. If they only could tell us. We maybe would be nocked off our feet.
Last edited: 17 Dec 2019

Zozo, thanks for the interesting observations. So it is water movement, not the lack of light intensity that caused it to grow long runners. I’ll wait and see how much longer the runners will grow and if ever stop. The floating leaves are dancing on the surface in slow motion. Eventually, I will chop off some floating leaves but leave the long twisted runners as they look cool sort like onion plants.

I’ve watched a NG episode that demonstrated plants are like animal that interact actively with one another, respond to touch, injury, territorial aggression, and even music. Growing lily is a unique experience as It is such a fast grower that I can practically see growth and movement in front of my eyes.

tiger15 said:
that I can practically see growth and movement in front of my eyes.
Click to expand...

That's with most fast-growing plants A fun experiment to try at home with a potted plant. Than you see all its leaves turned top side towards the light source/sun. Turn the pot around, so the leaves face the wrong direction. Then sit next to it wait and watch. You really can see the leaves change direction and turn over. Best to try this with flowering annual plants. (Fast growers.)
You must log in or register to reply here.
Share:
Facebook Twitter Reddit Pinterest Tumblr WhatsApp Email Link