Ok, so they're livebearer babies but still, I don't see them often as they get munched quickly by other tank occupants

I found one of my guppy (red lace snakeskin) females dropping fry at the weekend and managed to get her into a breeding net. She'd dropped 4 or 5 before I managed this and I'd seen most of them get munched by other tank occupants. Harsh, but a good natural food I guess... Anyway, she had a further 5 in the net, though one was still born so I have 4 in there now (and one I've seen hiding in the tank amongst the plants - tough little guy )

Today I've found more babies which look like they're new borns (about 8 of them). I think they are guppy fry but they seem smaller than the ones I saw drop out of the female guppy. 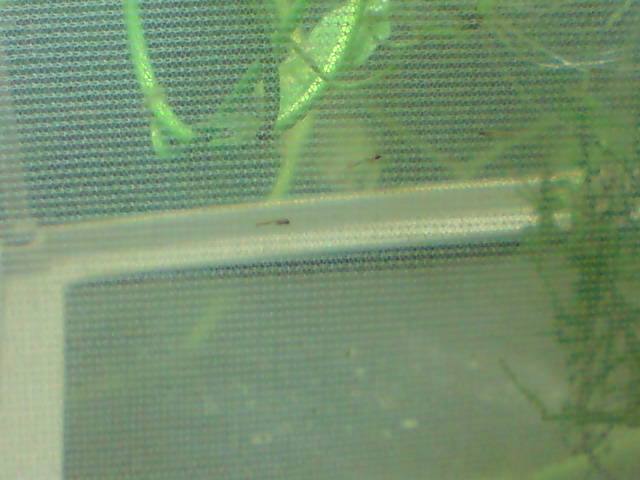 And here's what one of the potential fathers looks like: 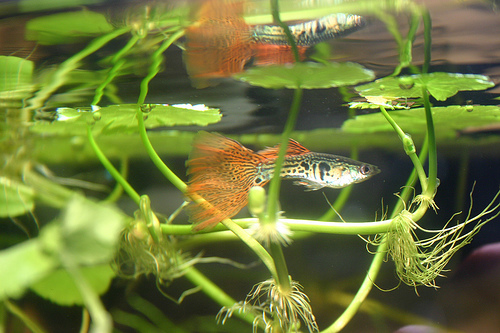 I used to have a net when breeding endlers, but since going heavily planted they survive anyway, i have a couple of bags waiting for a trip to MA lol.

They are stunning fish, good photo aswell, i like how you have the fine detail of the roots
Aaron North
My Flickr Account | Equipment needed for setting up an FE | Algae & Nutrients

Nice one mate! love the photo too, really smart.

Looking forwards to seeing what they turn out as. I'm suspecting guppies but someone on TFF is unsure, as most guppy fry is usually larger than what I've described apparently (still new to livebearers!)

I had lots of fry in the tank, but when I caught them to place in a sepatate plastic tank until they get picked up at the weekend, the adults have eaten most of the fry

I was shocked to see more babies today! All clinging onto some a Hydrocotyle leaf! 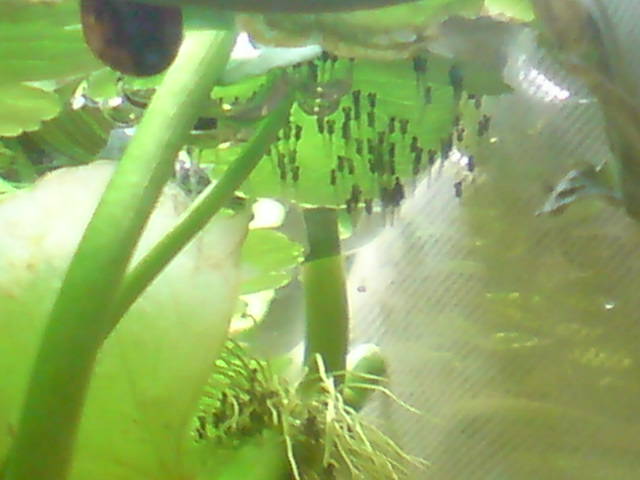 And I know who they belong to now: 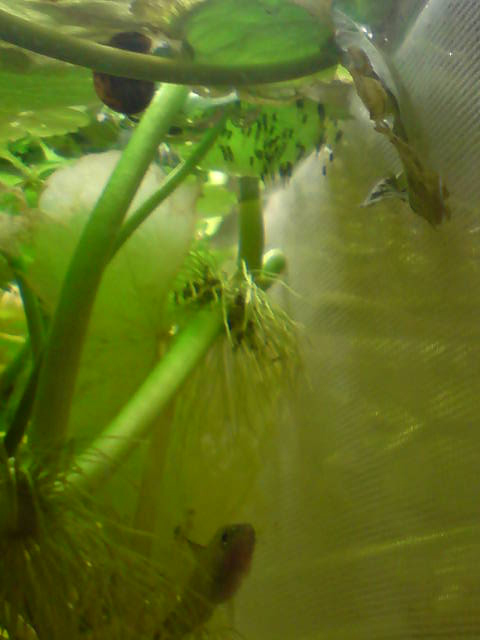 My Sparkling gouramis have spawned! I had noticed they were hanging around the outside of the breeding net that was in there for the livebearers. I assumed they were protecting a good hunting spot or eyeing up the fry in the net. It now seems she's being a good mum and protecting her young from any fish that comes close! I'm quite chuffed
--------------------------
Flickr photostream.
A

No, it is well hidden behind the breeding net and under the light fixture. Right in a spot I couldn't see. Also, having never actually seen one before, I might have not noticed it amongst the roots of the Hydrocotyle.

Edit: A little concerned about how to rear these guys, as they are so small. Infusoria seems to be the choice food, but I need to rear some, some how. Reading up on it it's relatively straight forwards but time is of the essence.

I do have several powdered fry foods (hikari first bites seems to be the fines I have). I've been mixing some with water and blowing it in the direction of the fry with a syringe. I've seen one of them pecking away at the particles so hopefully it's small enough for them...
--------------------------
Flickr photostream.

I'm chuffed for you Steve Keep the pictures coming. You never know you might have guppy and gourami fry in there at the same time!...

Happy days Steve! Why not try hatching baby brine shrimp? takes a couple days to hatch but the will be feeding on the egg sacs for a few days and then will eat protozoans that are already in the tank for a few more days.

Congrats! I've never bred this species but they may not eat artemia for a few days after they're free swimming as some Labyrinth fish are tiny but you won't know unless you try! You can get infusoria in a couple of days by adding some powdered milk to a container of tank water but it can smell a bit. The powdered food should be a good and they should be able to manage some of that along with some live food. Good luck!
Ed
You must log in or register to reply here.
Similar threads