Although I dont have any VFT's I am slowly gonna start getting into carniverous plants more. They're generally kept in a 50/50 peat sand mixture and they need a winter dormancy

I used to keep some (in pots outside). From what I remember, they will only thrive in places with very low nutrients, which is why they have developed ability to catch insects for food. As a houseplant, it is only meant to be given rainwater, so i imagine there is a risk that tank water might be too rich in nutrients, especially if you add ferts. That is if its roots can absorb water from the tank. But if it gets its moisture from humidity/ you giving it rain/RO water, it might well work. I might be wrong though, see what others think as well.

I've got a nice Nepenthes on my window sill, not sure of the exact variety but only cost me £1.50 from a carboot. I'll chuck up a pic when I upload a load tomorrow.

Killi69 is right about nutrients, I water mine with rain water and if I use tank water (which I use on the rest of my plants) it seems to suffer

Venus Flytraps are back in stock at IKEA... 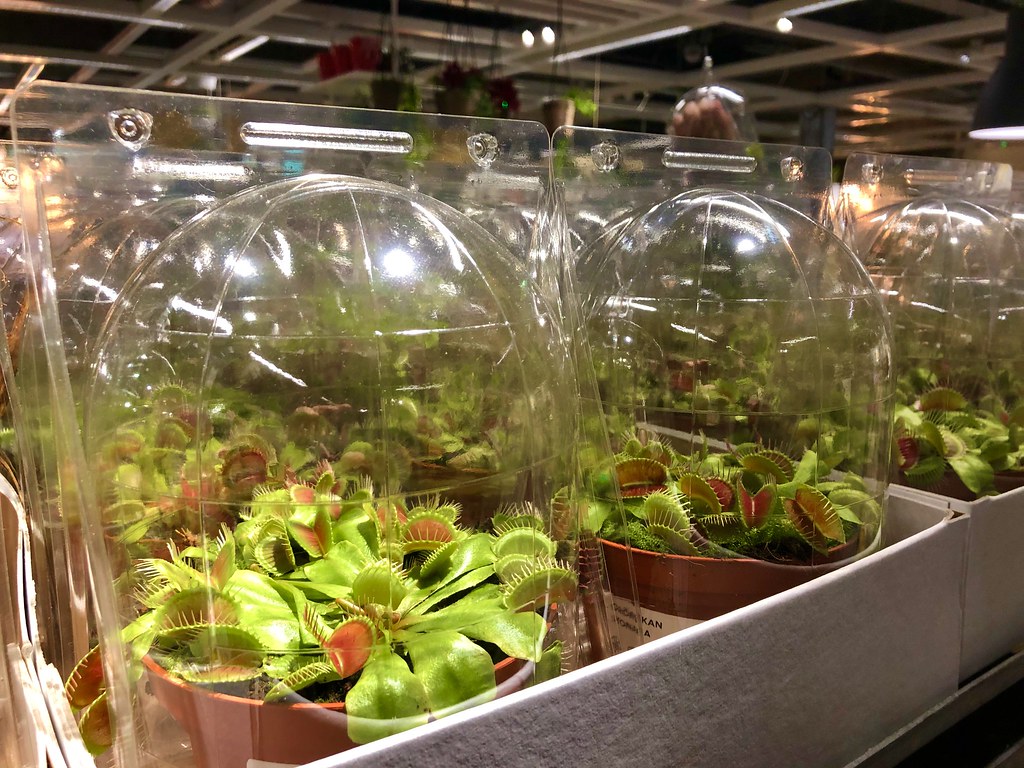 by Tim Harrison, on Flickr
.
Aquazeitgeist. YouTube
A Brief and Incomplete History of Aquascaping. Soil Substrate Planted Tank - A How to Guide
Schism Reimagined. NatureScape. Return of the Shallow. Windswept Eternity, Primordial. The Dark Side or What Lurks Beneath

At this time of year?. Interesting. In the regular garden centres, they all ran out of carnivore stock over a month ago.
Cheers,
Marcel..
Tanks for watching.

Hello there! Yes, I had some carnivorous plants but not Venus. I had sarracenia and I don't know why but it withered. Carnivorous plants are tropical plants so they have to have access to water and humidity should be quite high.

PlantsCase07 said:
I had sarracenia and I don't know why but it withered. Carnivorous plants are tropical plants.....
Click to expand...

They aren't all tropical and Sarracenia spp. need a <"cool winter rest">.

If you want an easy to grow carnivorous plant <"Pinguicula moranensis"> is a good one.

dw1305 said:
Hi all, They aren't all tropical and Sarracenia spp. need a <"cool winter rest">.

If you want an easy to grow carnivorous plant <"Pinguicula moranensis"> is a good one.

And a potential scaping stunner.. 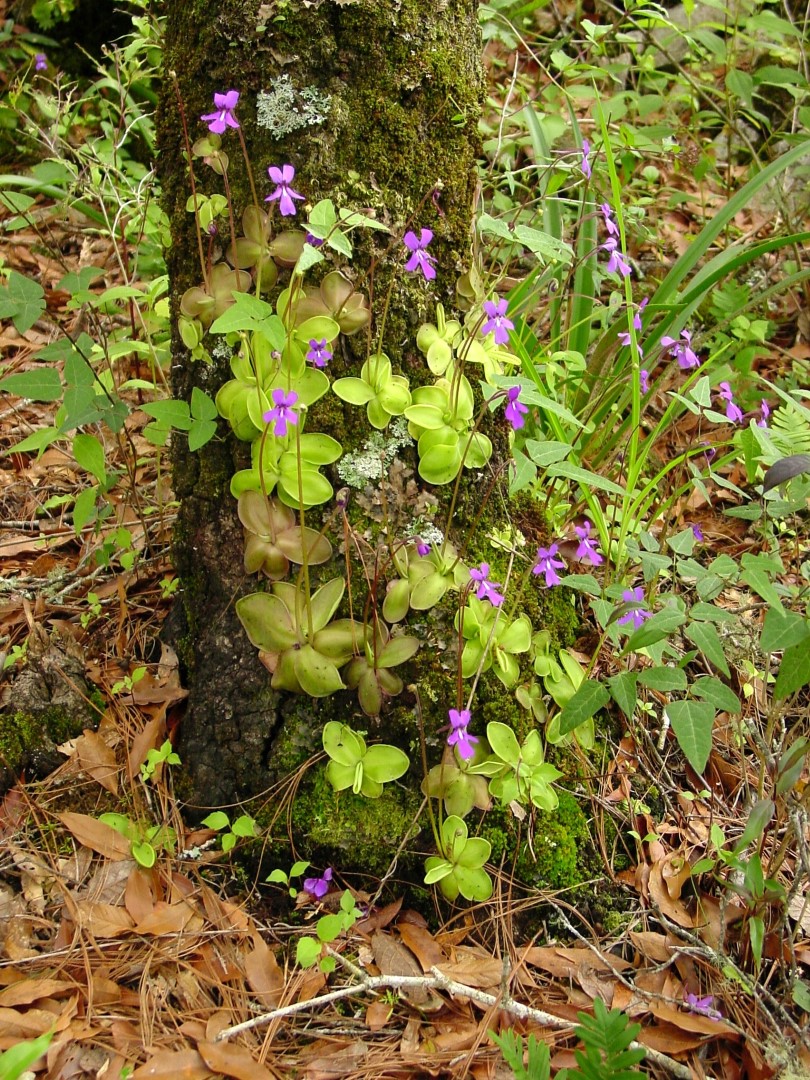 True about sarracenia, mine have been fine in my unheated greenhouse over winter where they're a great natural fly deterrent. Great to look at too.

I ve seen some cool pinguicula recently. Think they could work well in wabikusa.

RO water, a windowsill and bloodworms are your friends.

I've got a few carnivores currently dormant, but doing well with just those elements above.

The secret of keeping a Venus thriving is simple...

This is still the original Flytrap, after spending the winter on the study window ledge and a kitten that took a liking to eating the traps it was down to one or two traps per plant. As soon as I put it back under the table lamp it started to thrive again. No big mystery... 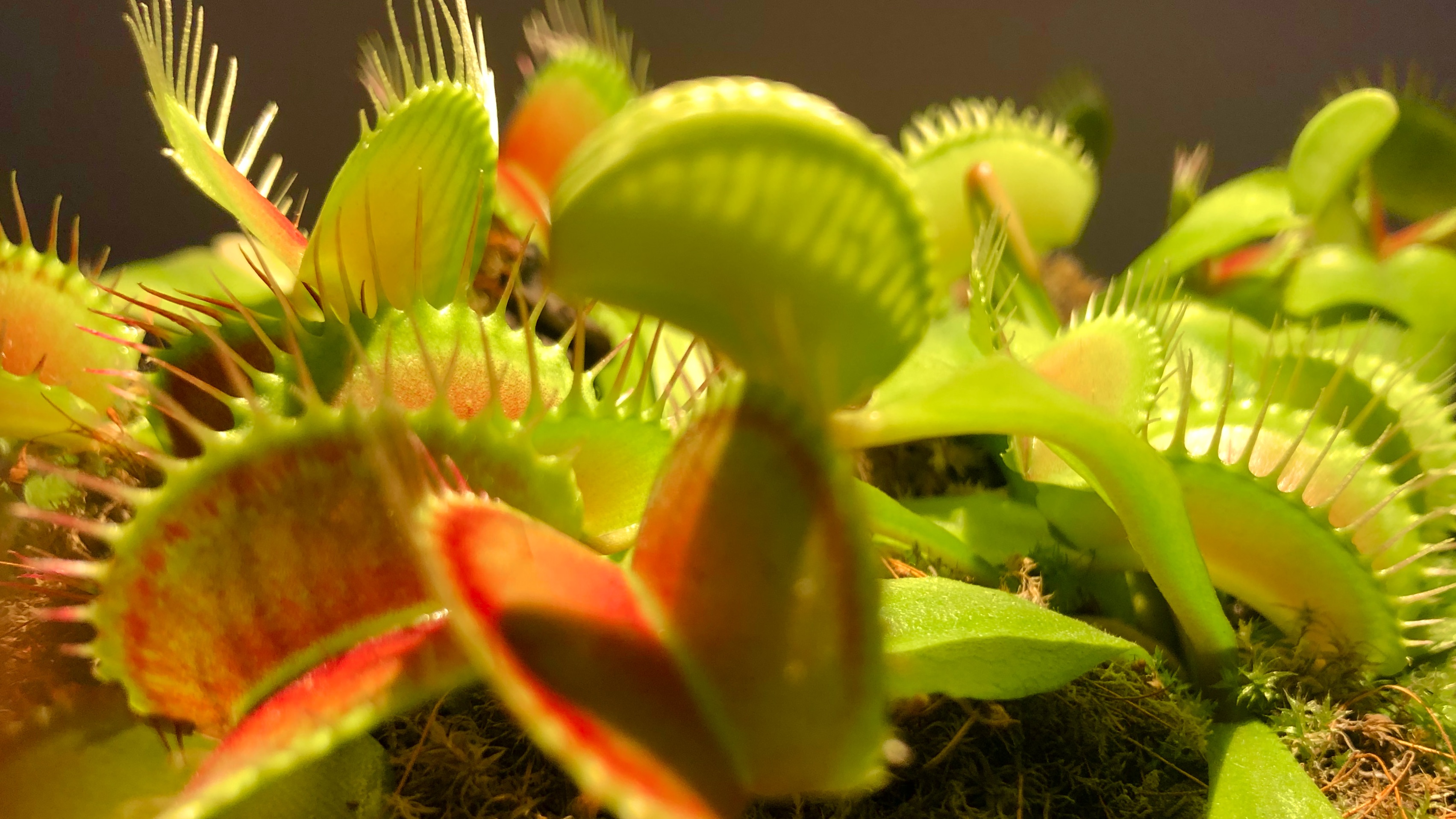 P.S. it's also flowered several times and none of the plants have died. Light really is the solution...
.
Aquazeitgeist. YouTube
A Brief and Incomplete History of Aquascaping. Soil Substrate Planted Tank - A How to Guide
Schism Reimagined. NatureScape. Return of the Shallow. Windswept Eternity, Primordial. The Dark Side or What Lurks Beneath

Good opportunity to showcase my sarracenia pride and joy lol!

Summer has brought it exploding out of dormancy, photo difference below is Feb to now 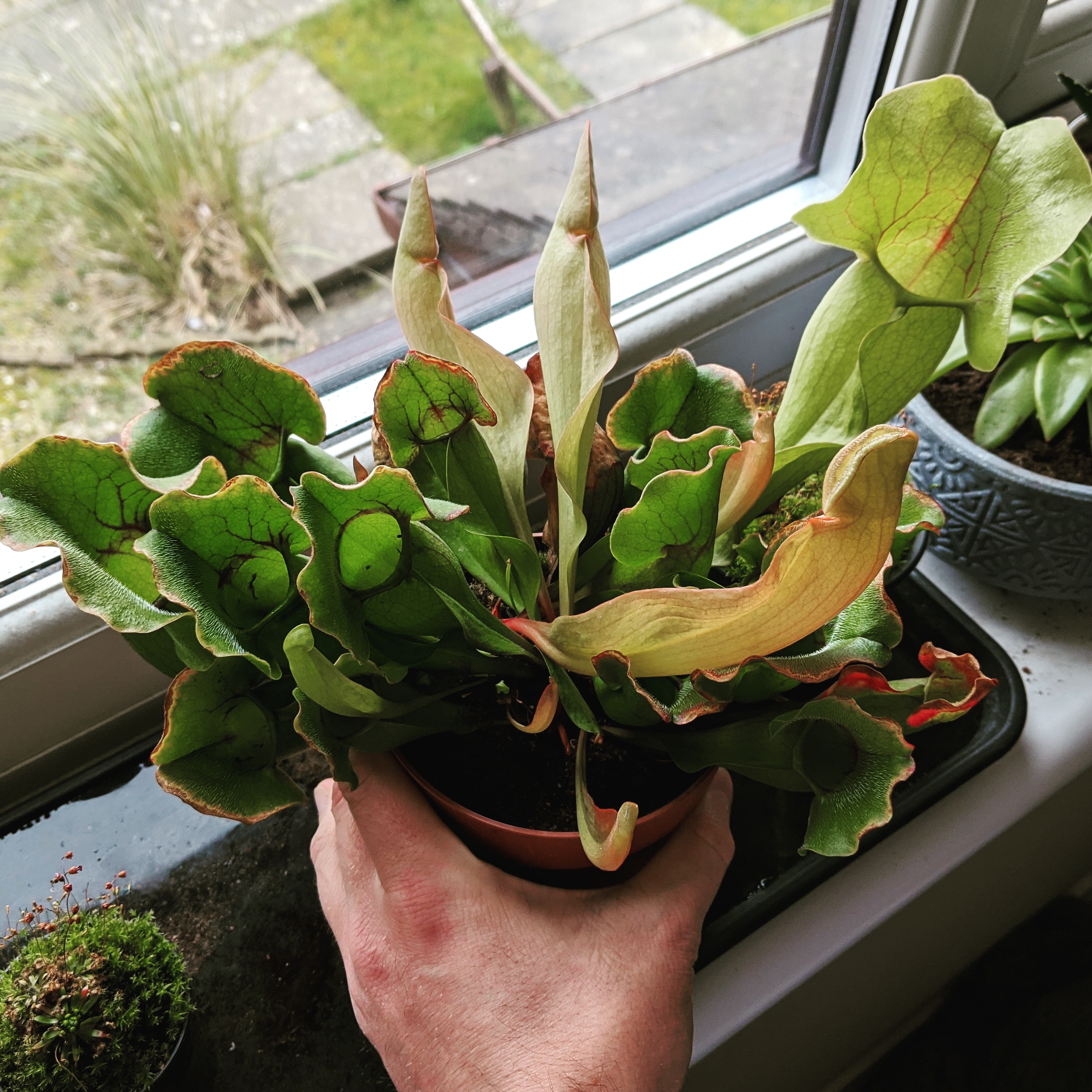 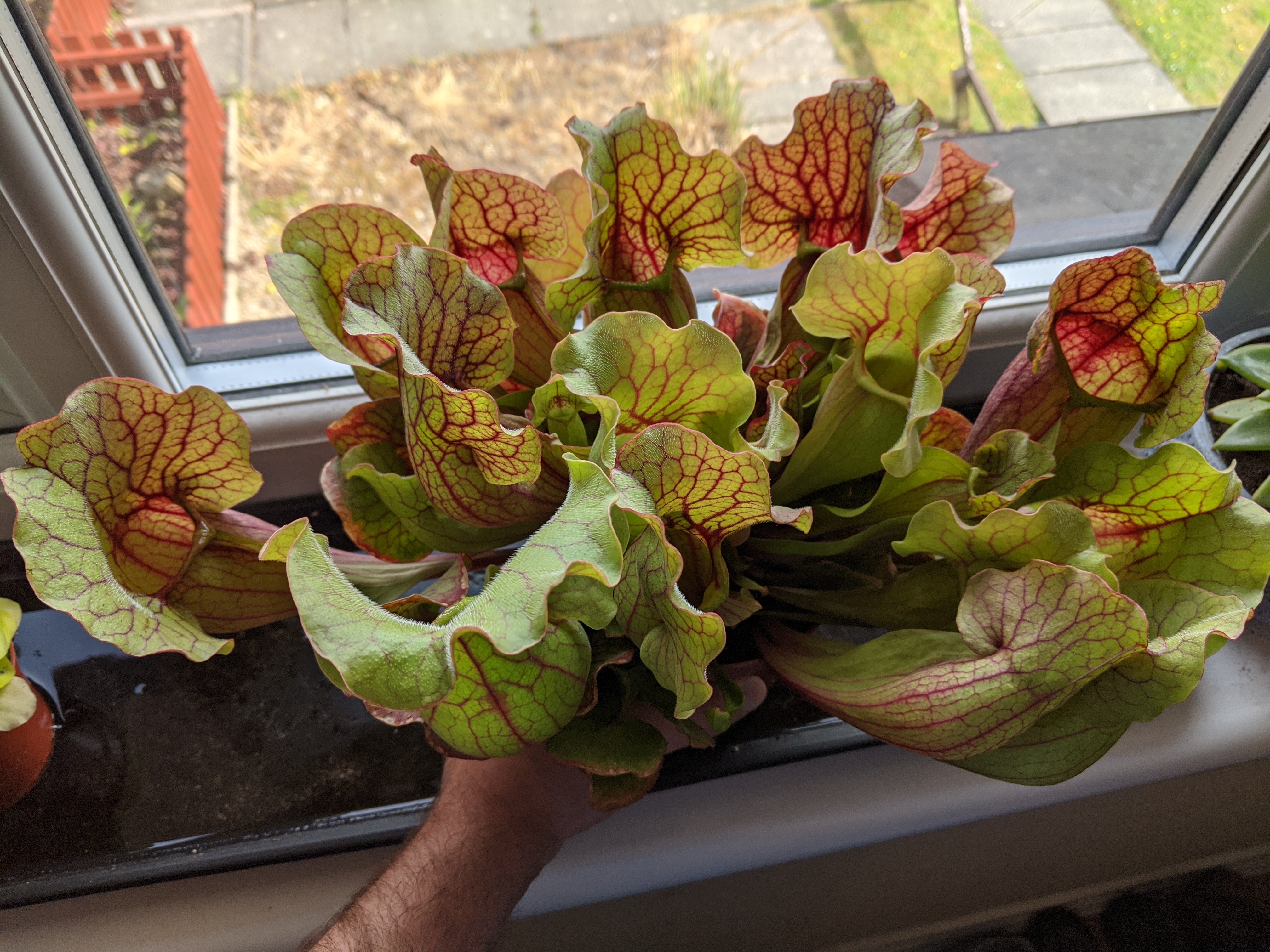 I think these little beasties...maybe the answer to the flies coming in my patio door

Tim Harrison said:
And the very occasional feed of very dilute fertz (tank water once a month)
Click to expand...

I was wondering, since my Nepenthes grew like mad last year.. This year a good start but somewhere along the line sarted to fade a bit. 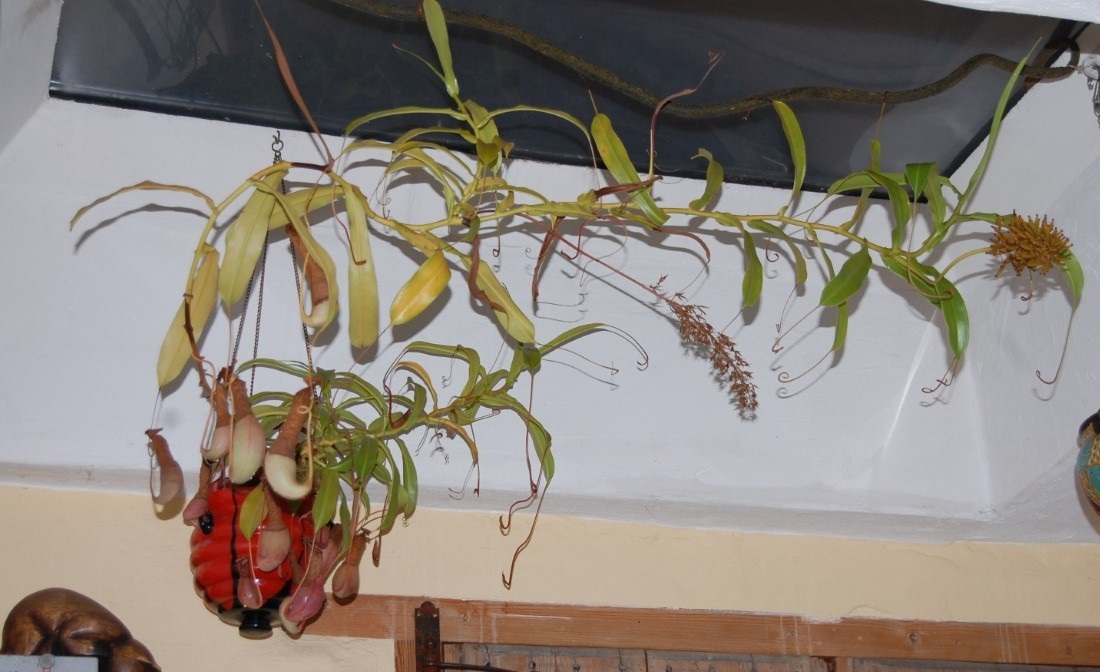 Maybe it still needs a weak fert solution, but I'm yet not sure what to give. If it's natural die-back or deficiency?...

It made a huge flower early spring. Banana lookalike, still closed.. It's the second one, never actually checked for seeds... 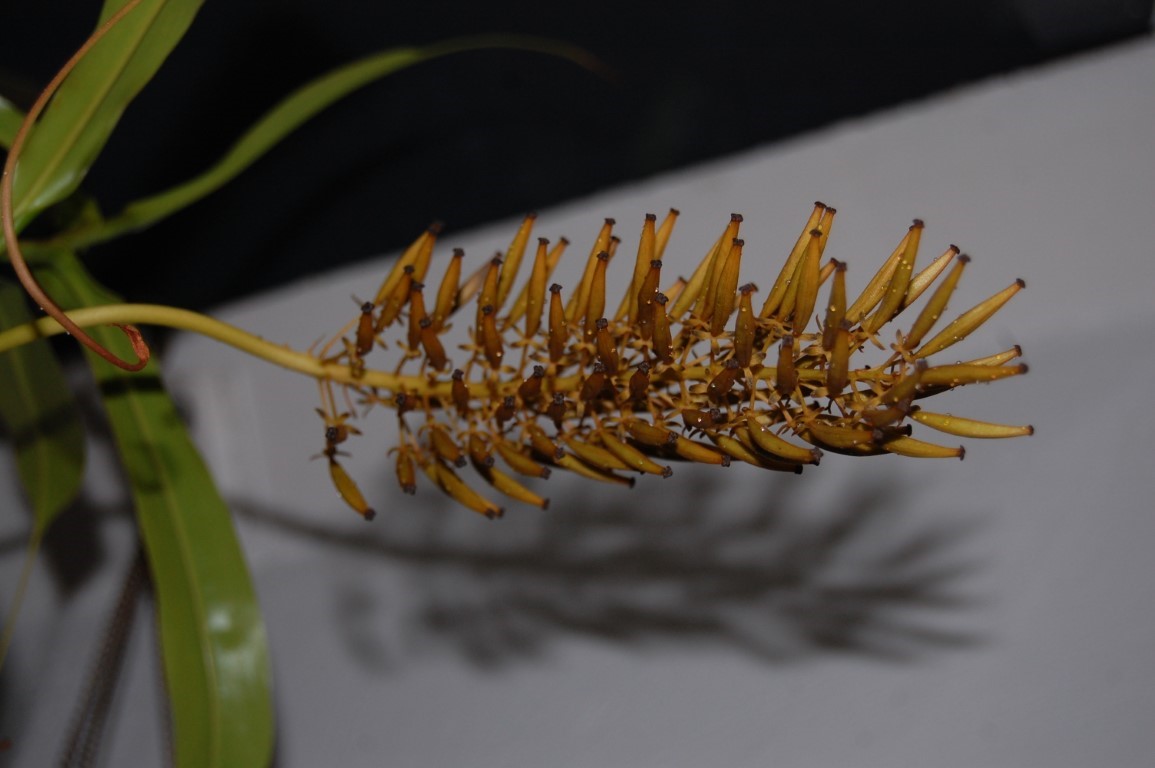 Oh hey, I love carnivorous plants! I recently acquired a new little Pinguicula, who immediately rewarded my efforts by flowering as I write -

And I've got a little bog biome terrarium I made from an old 18l tank I had from years back, with sundews and terrestrial bladderwort, which looked fab a few weeks back when everything was in flower at once - 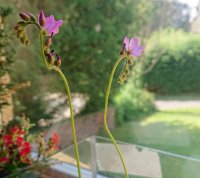 I also used to have a decent-sized sarracenia that I kept in an old ice cream tub next to the pond planter outside, but he was a recent casualty of the severe dry spell we had in late... Spring, was it? Time isn't real XD The bird shenanigans with his tub didn't help.

Also, yes, the saraccenia was kept outside in all seasons for at least a few years and suffered little damage from winter rain and frost! People think of all carnivious plants as tropical by default, but in fact nearly all sarras and plenty of sundew species are from temperate areas, and much more temperature-tolerant than people give them credit for.

I believe there's even some temperate venus flytraps, and there's definitely at least a couple of little sundew native to the British Isles!
If wishes were fishes, aquaculture wouldn't cost so damn much XD

Where’s the best place to get these plants