Hello! It's been a while (~10 years) since I've done one of these, upgraded from a 75P (all my previous journals using that tank are are on the plantedtank.net which is where I used to post) and a hand made cabinet, to a 90P and an ADA cabinet, because I'm a big boy now, ha. It's very obviously Iwagumi, I used seiryu stone (30kg+) and HC 'Cuba' exclusively; I'm not going to lie it's my favorite plant. Still using a MH pendant with a 150w ADA 'Green' that's brand new and still needs some time for the green to die down and settle/burn in a little bit. Ask away about other equipment.

Here's some set-up progression pictures. I used hand cut pieces of corrugated plastic board as substrate supports/dams to help the rocks keep the dramatic slope that allows you to see HC 'Cuba' in the background.

Here it is now after some time to clear, filled today. 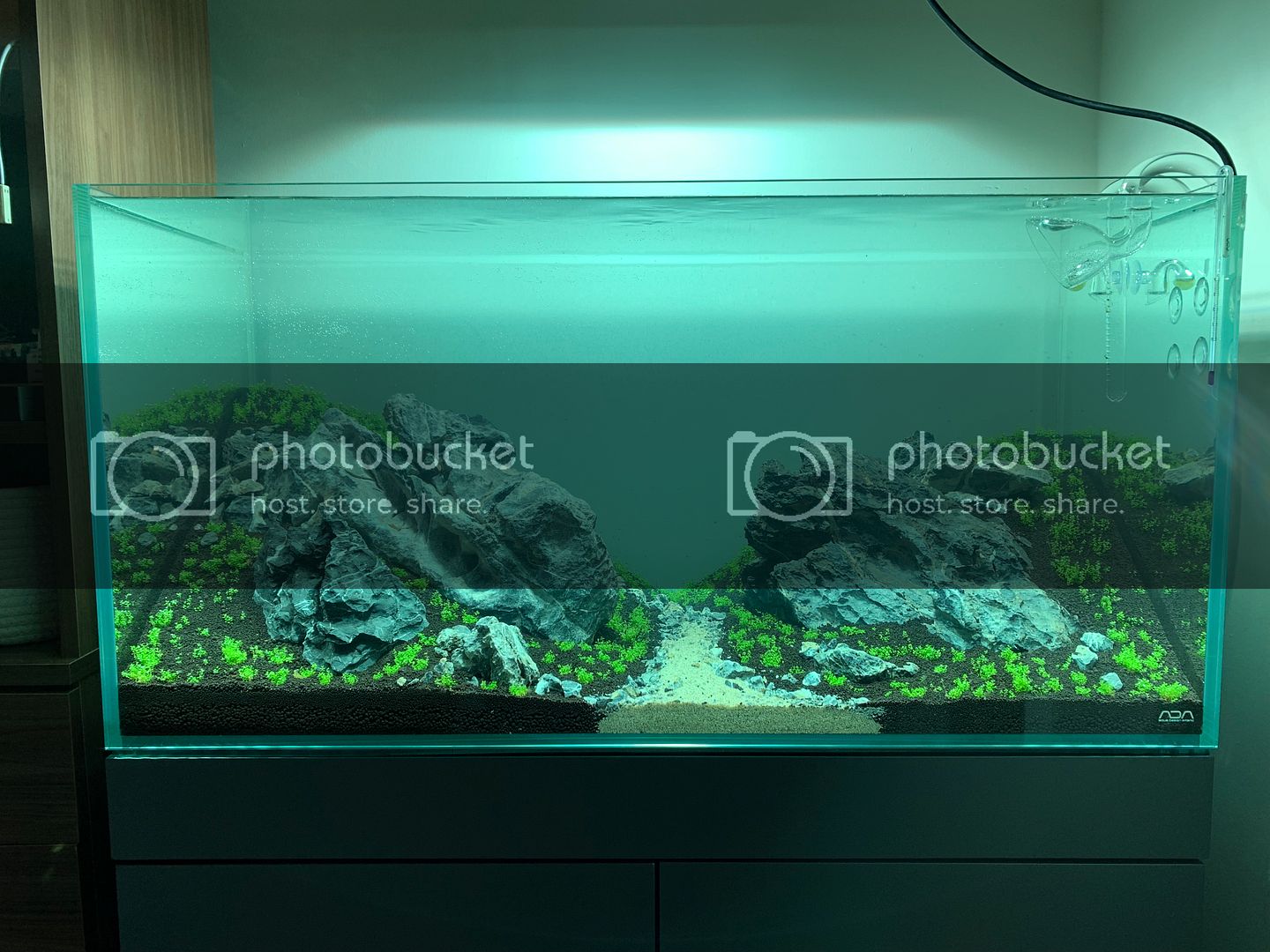 Okay now we can rewind to the beginning.

The cardboard divider for the river, which was meticulously bent at nearly every corrugation (took hours I'm a nut). 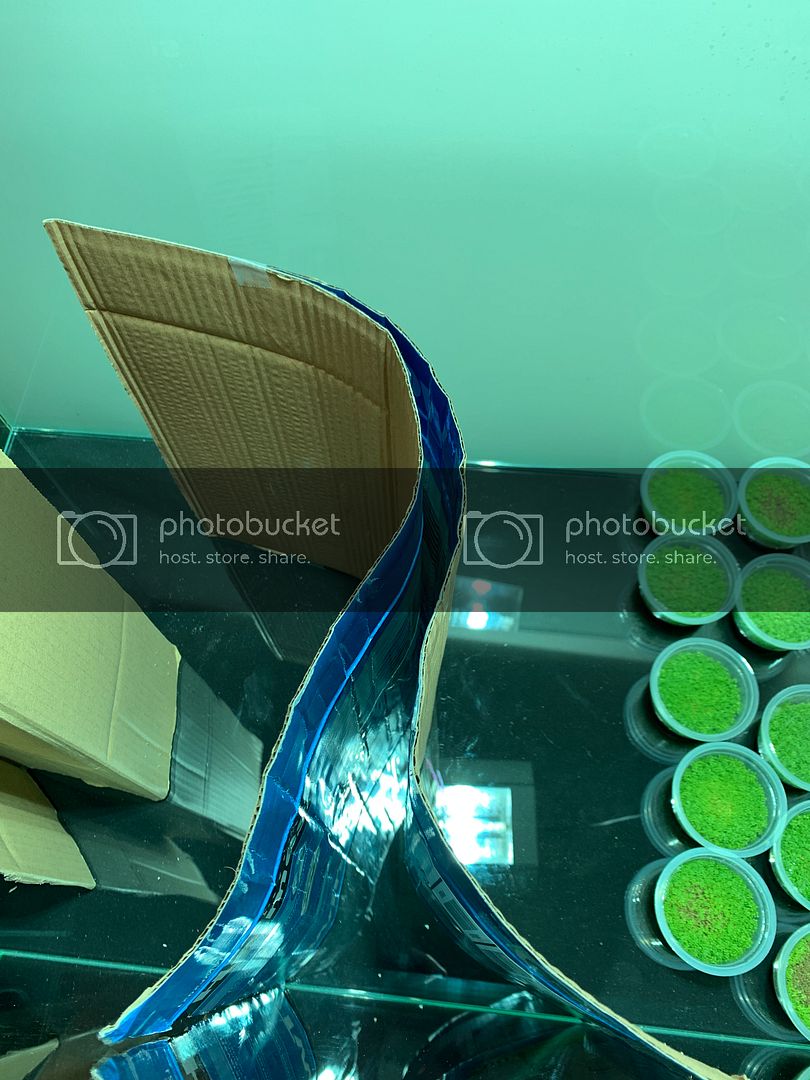 This rock was the right shape but too large so I had it against the glass and propped up with smaller stones, the dirt did a good job eating it up and making it look smaller, and it also helped hold the slope. 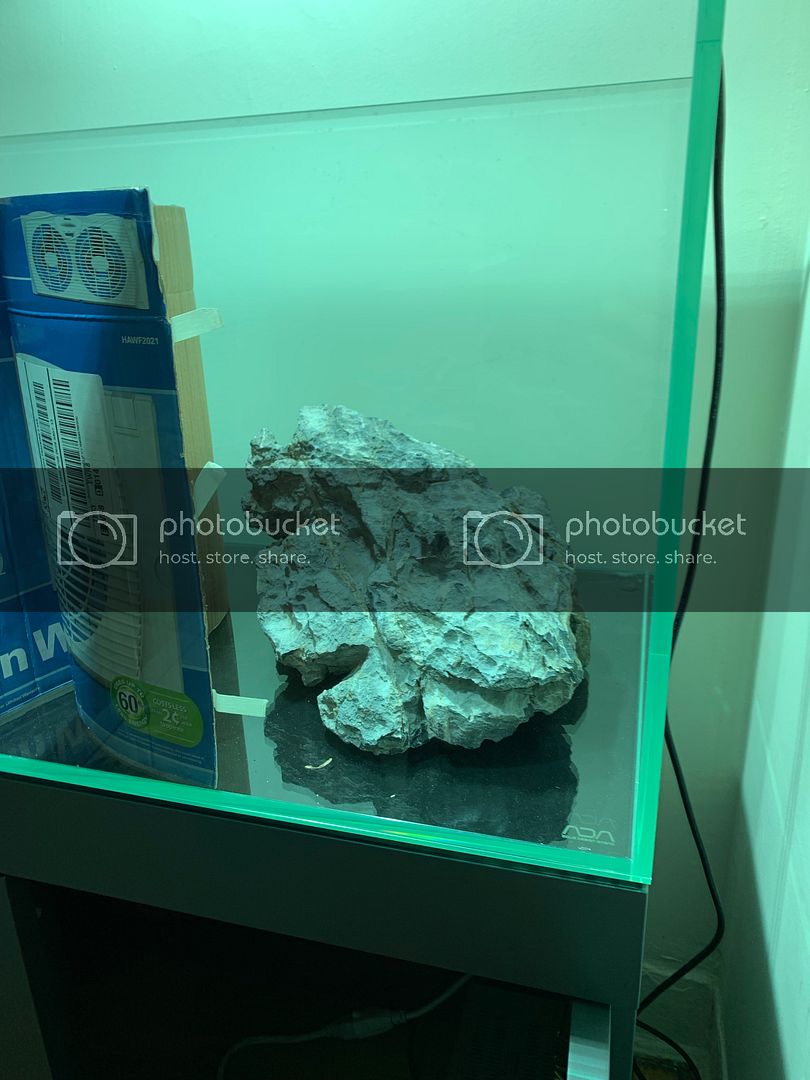 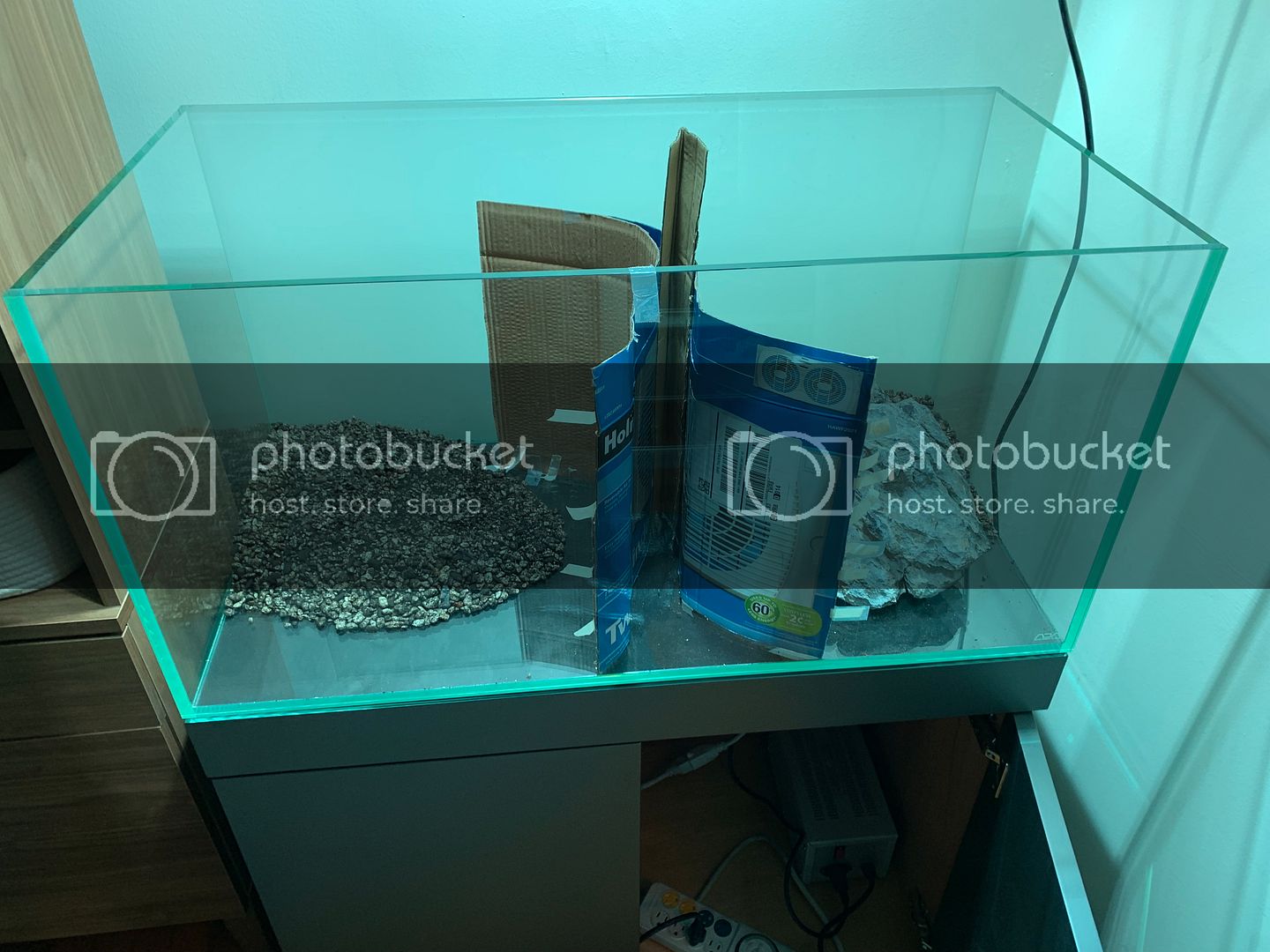 Corrugated plastic supports peaking out before adding powdered AS 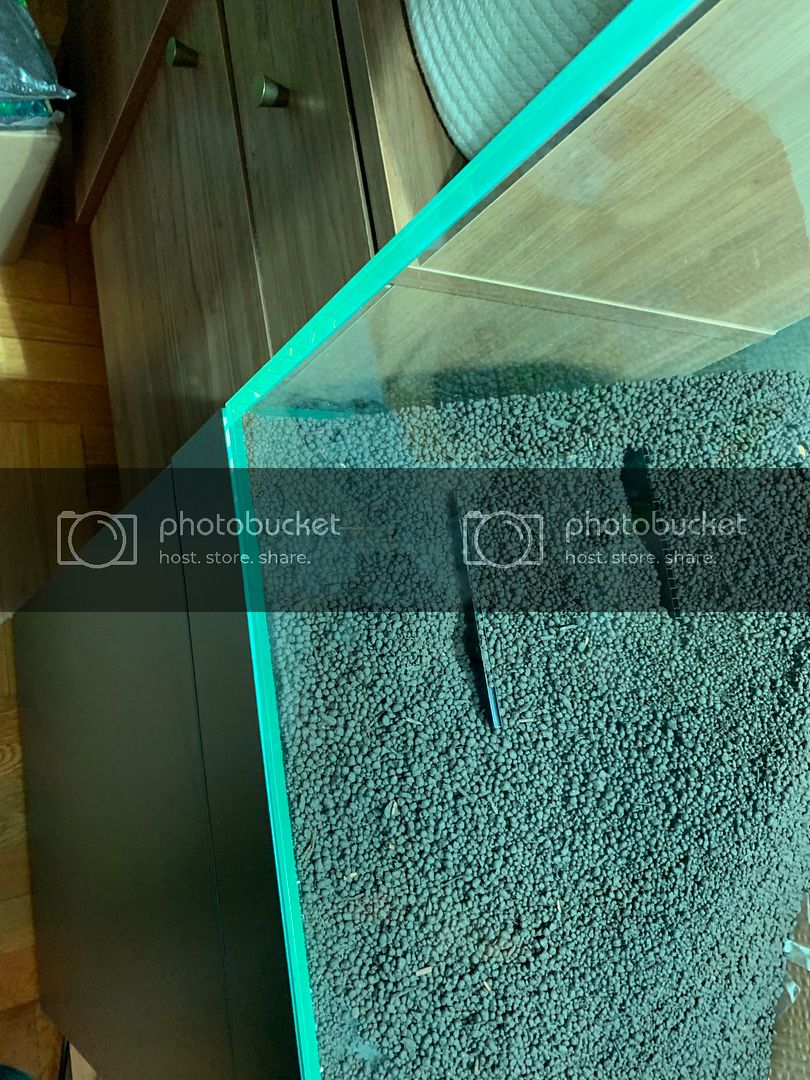 River getting filled in 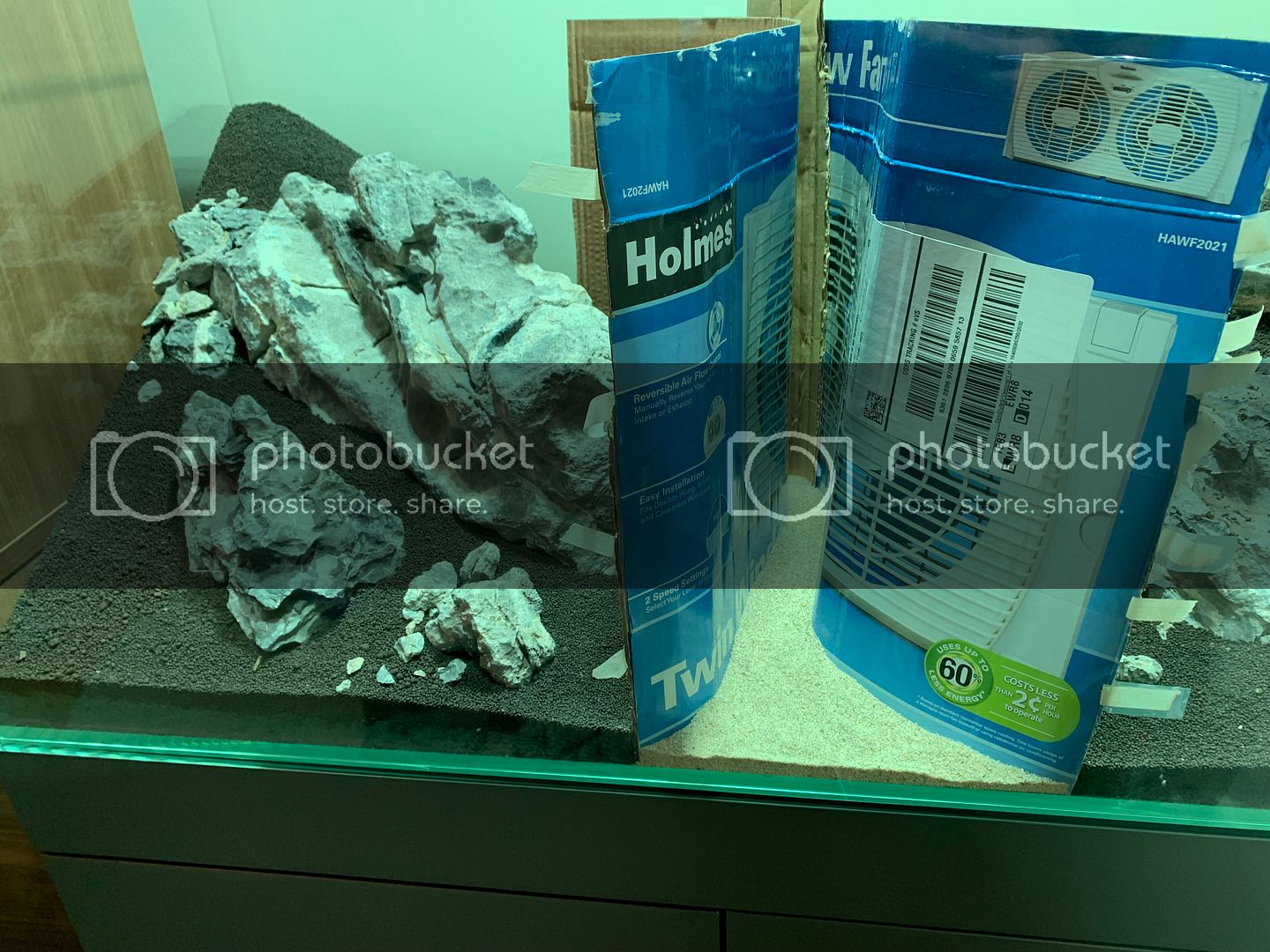 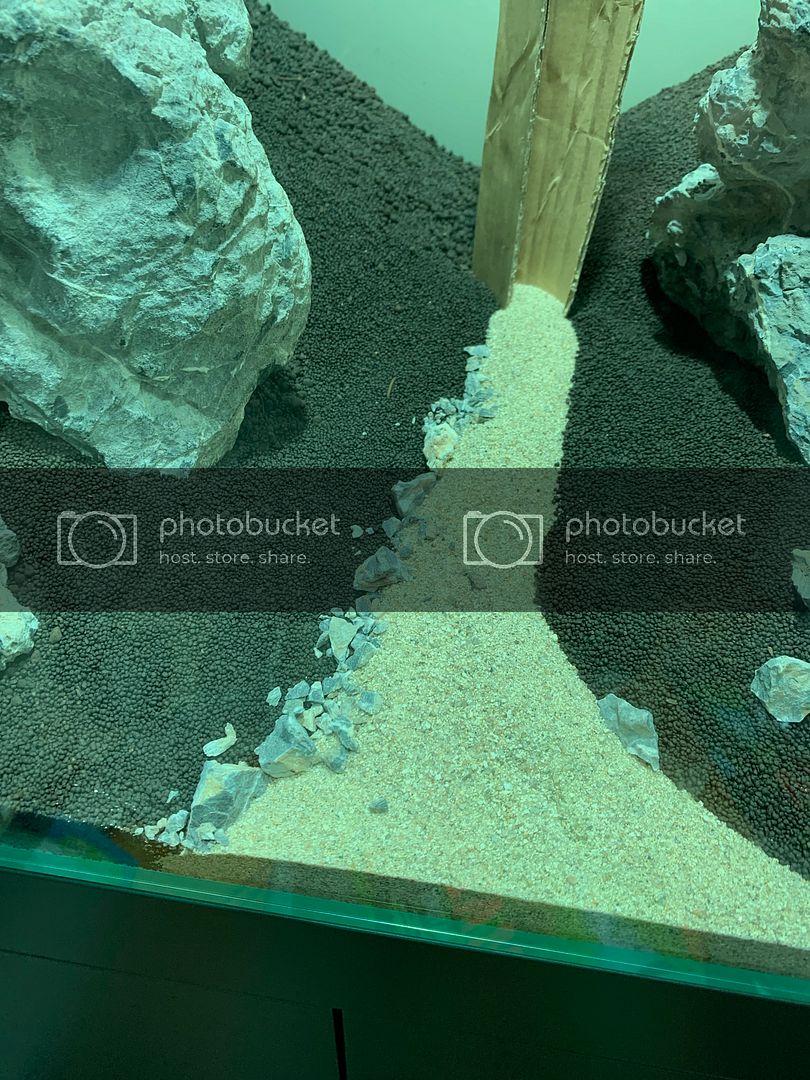 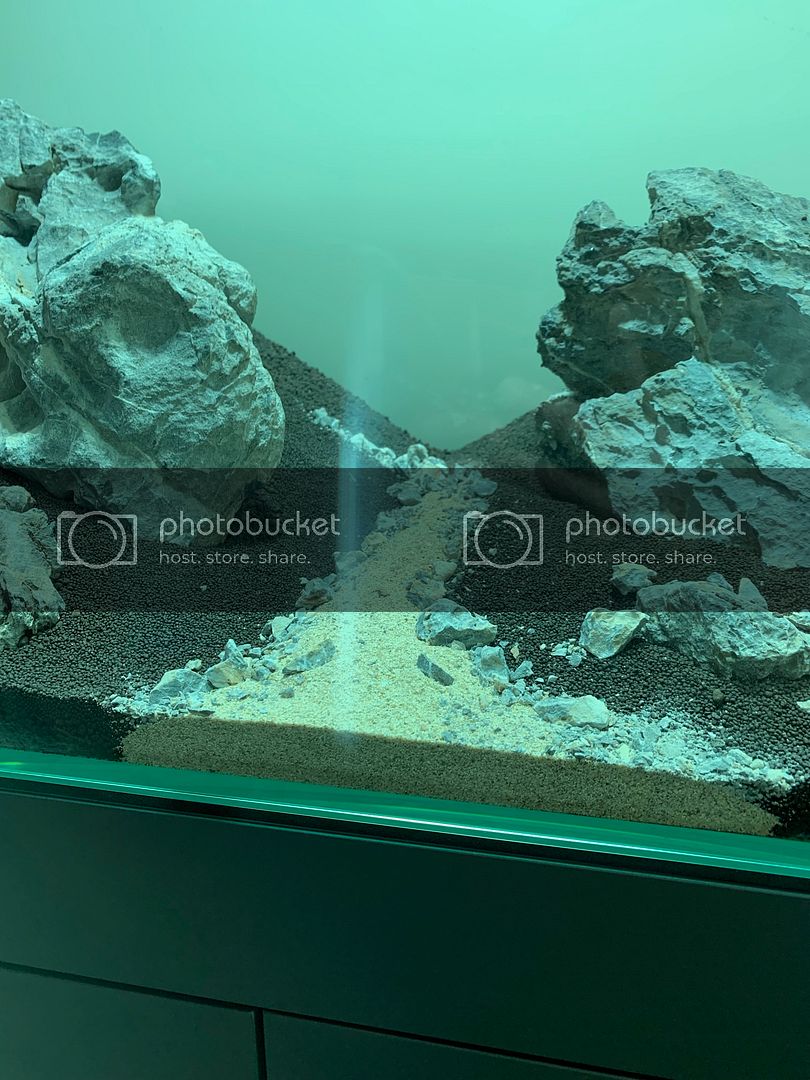 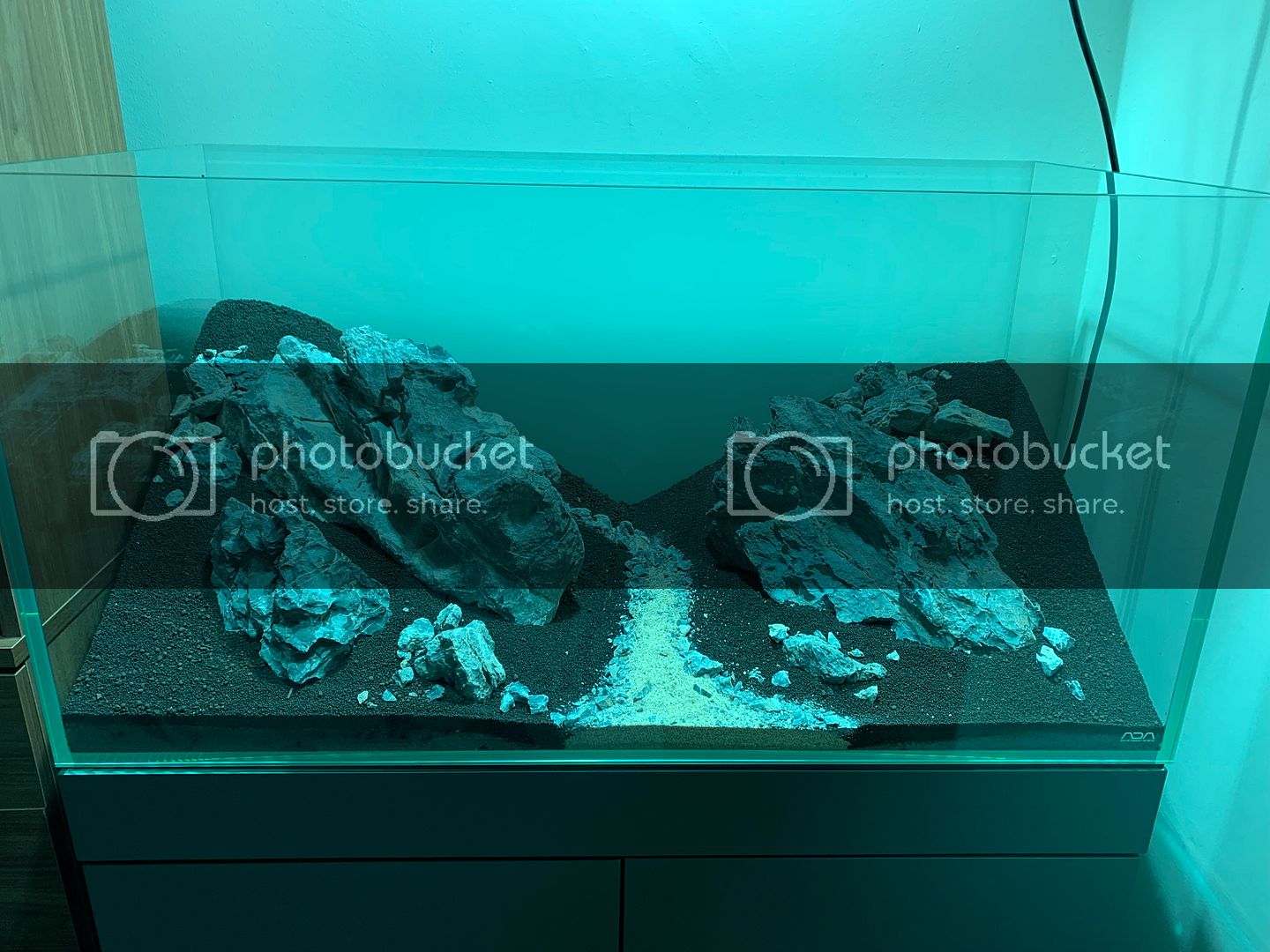 Planting this took at least 8 hours; I went through about a dozen of these trays and 32 cups. 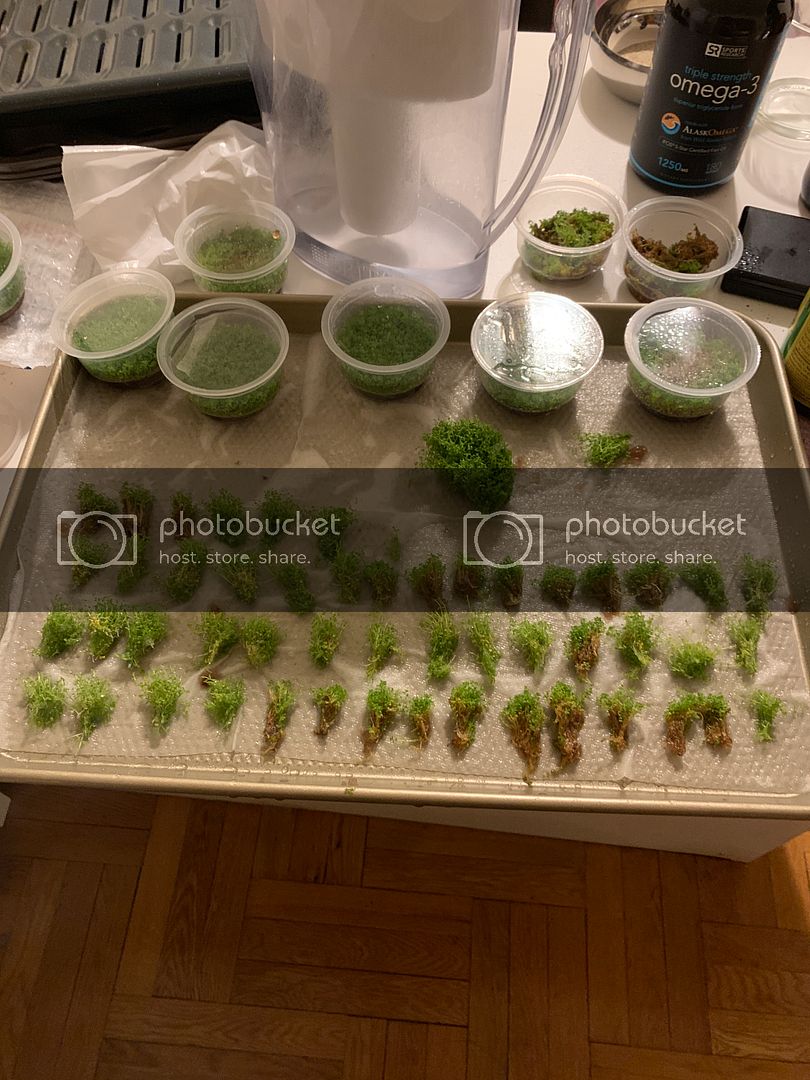 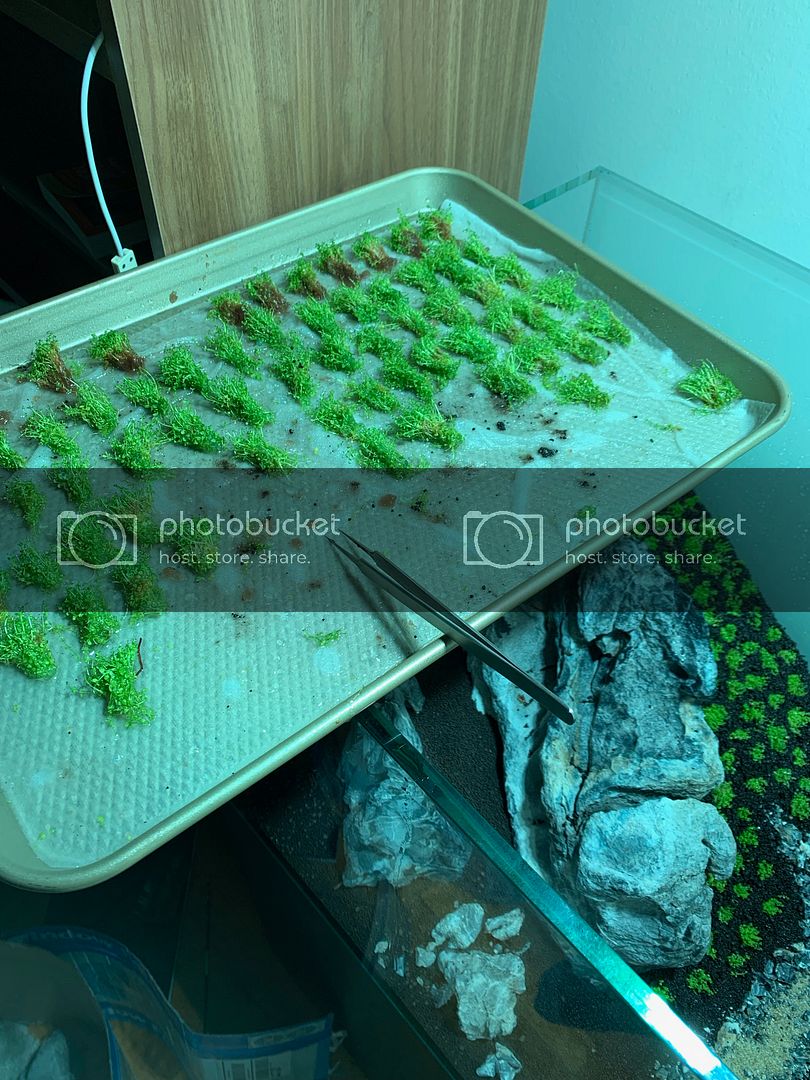 Densely planting as it is the only bio-load 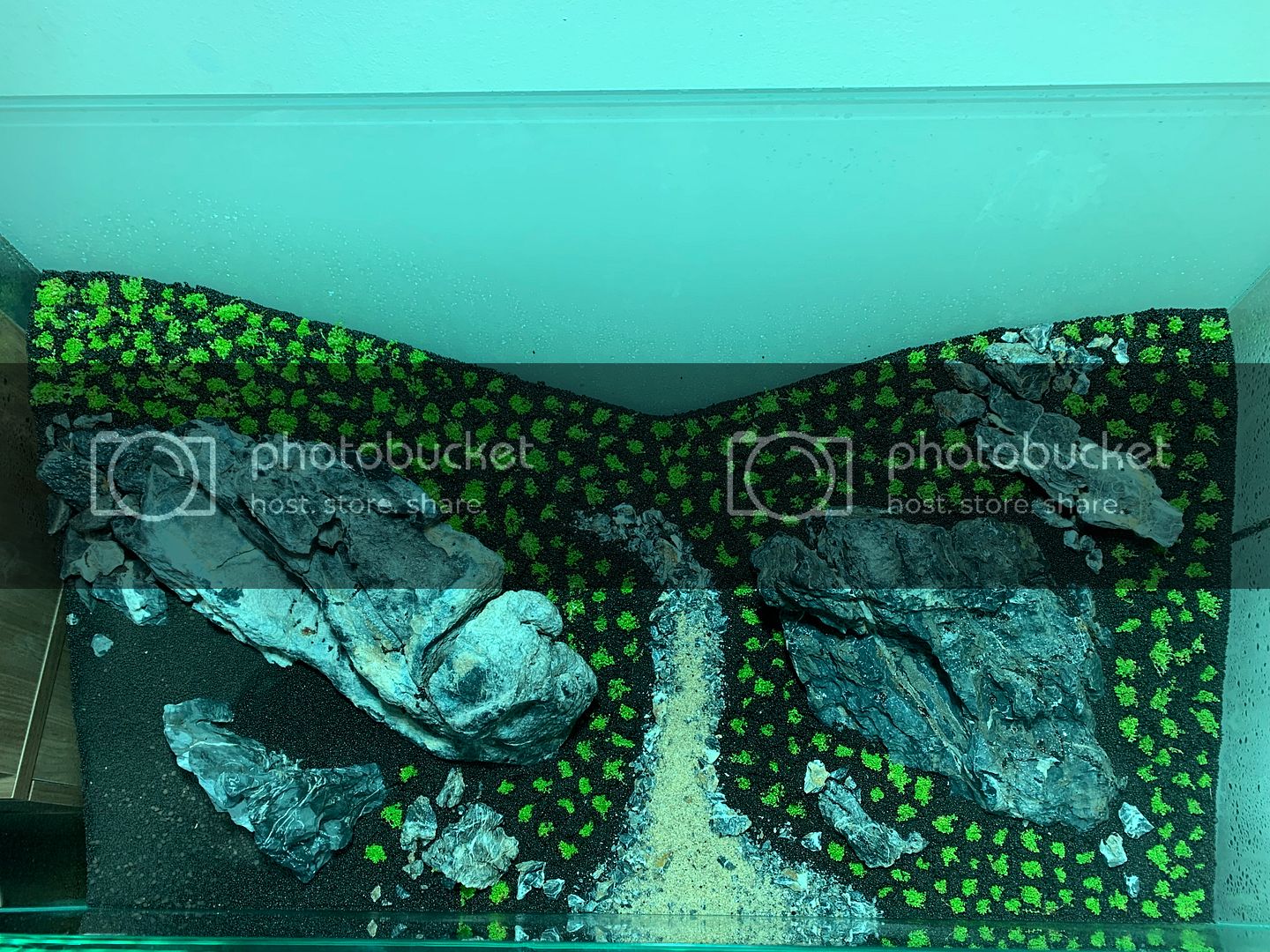 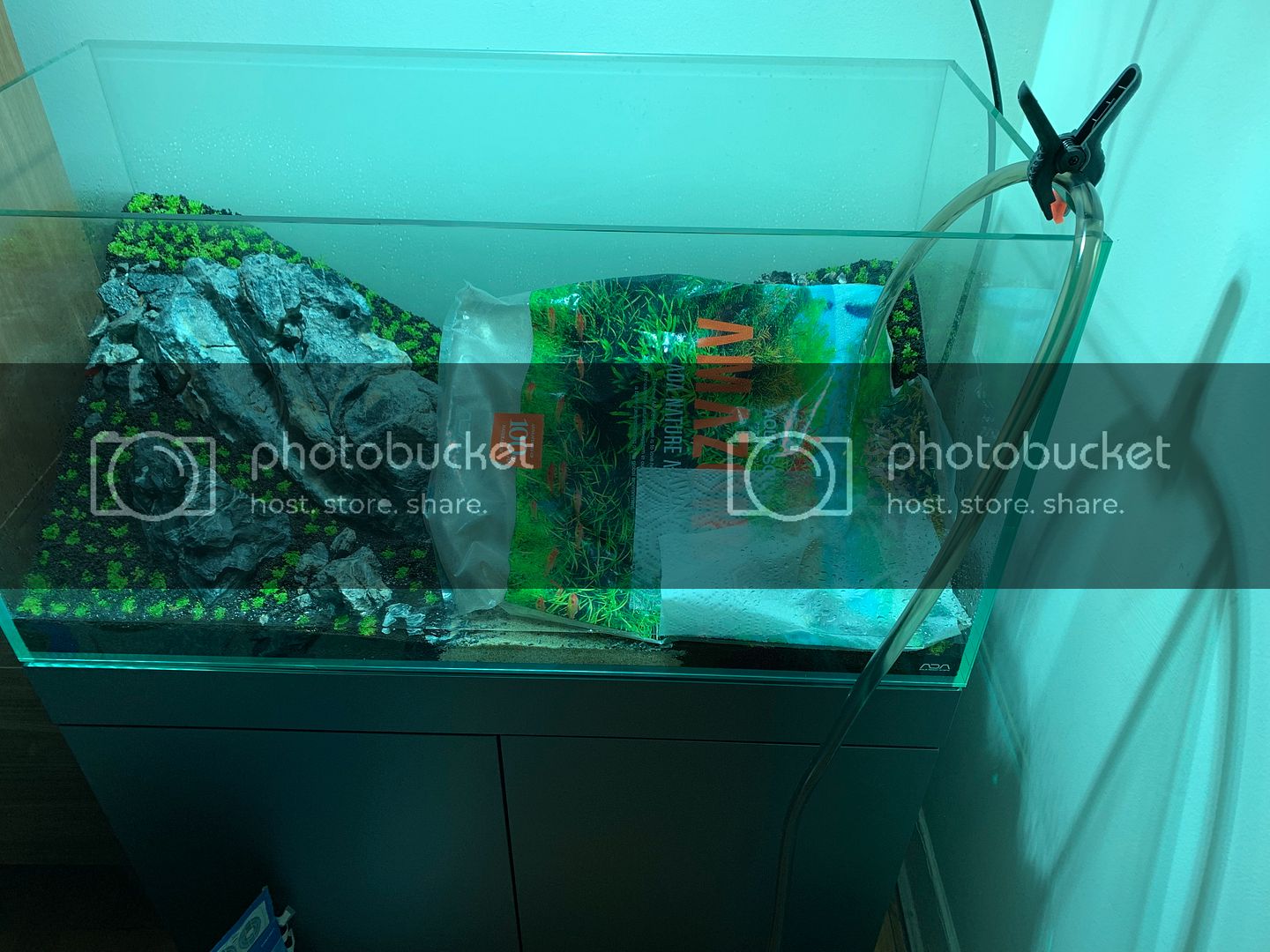 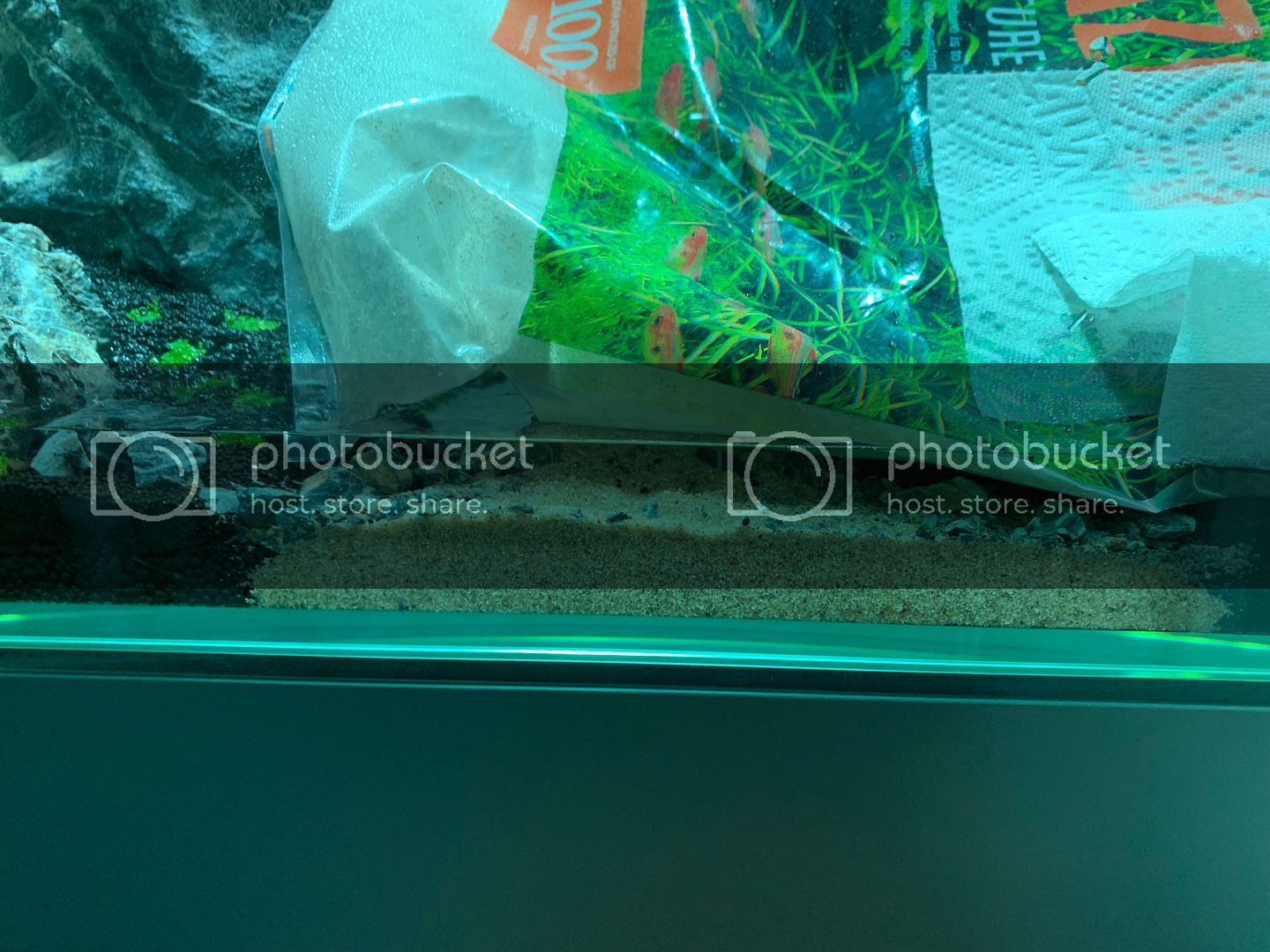 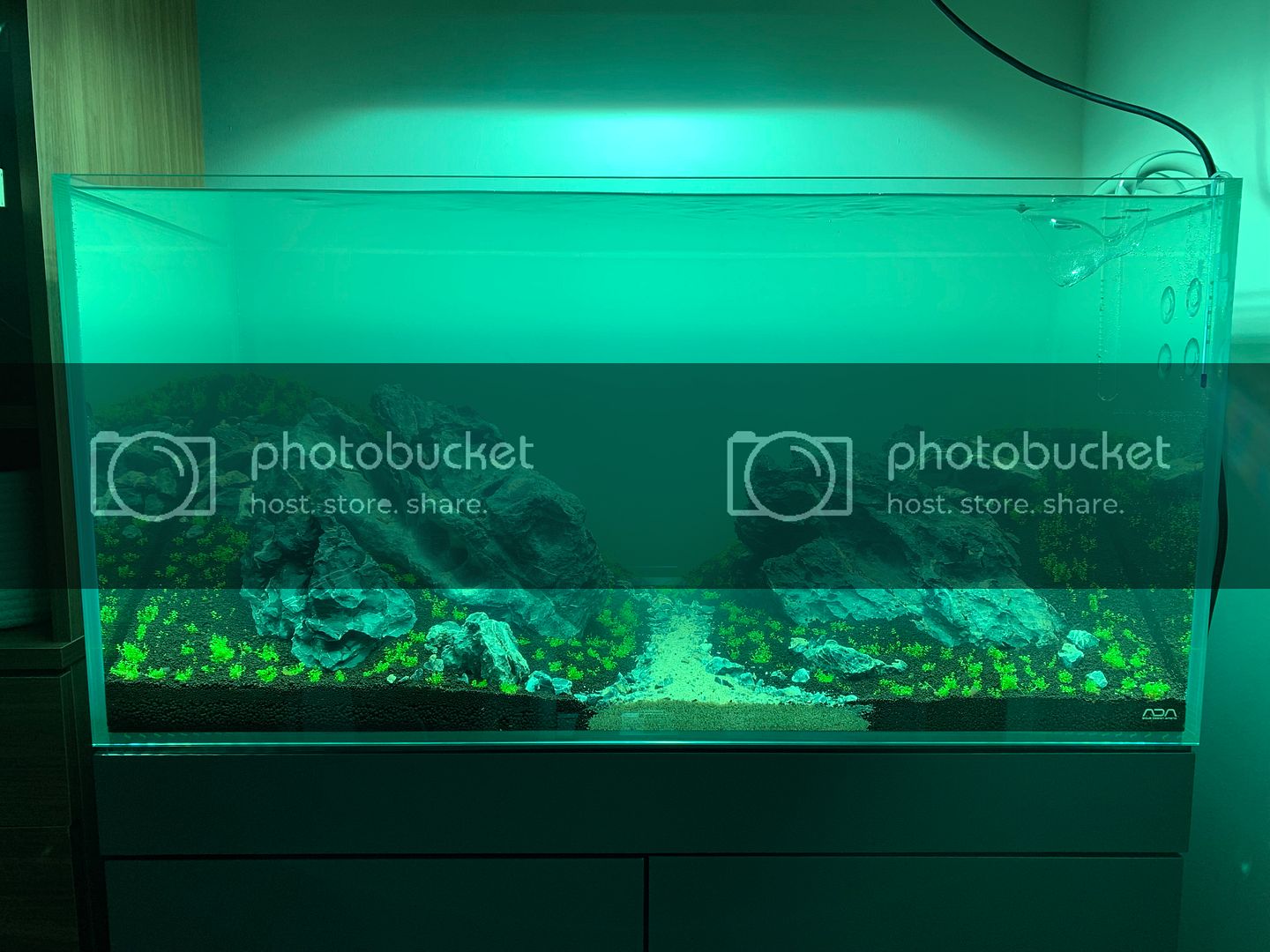 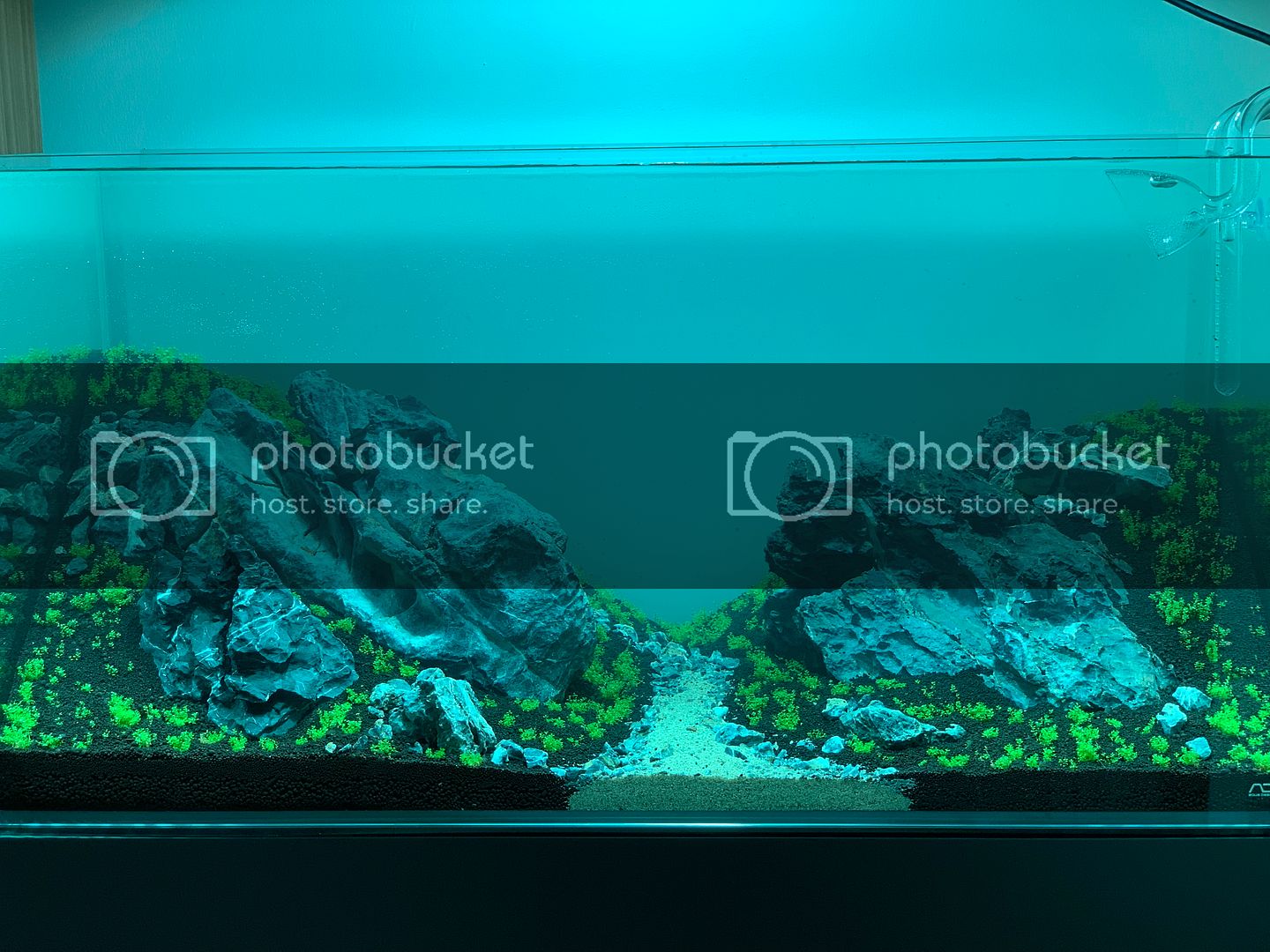 Off angle with the light in view. That's my tank for now, cheers! 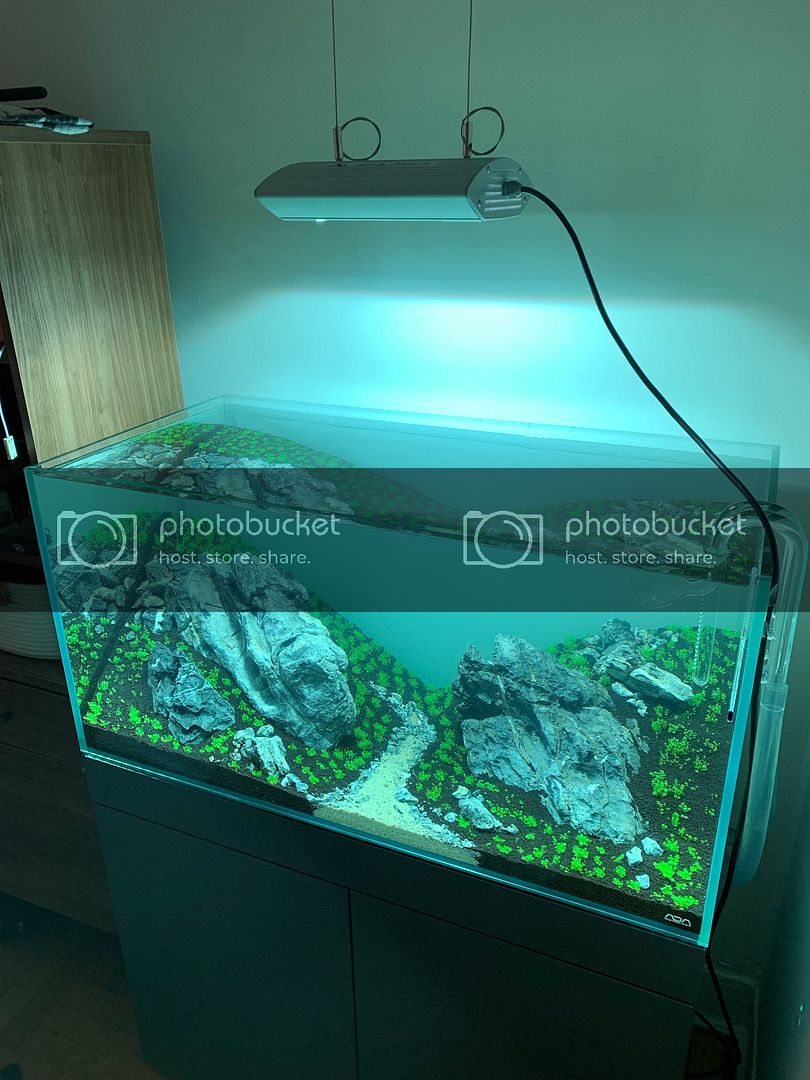 The entire set up from start to finish was a two day job, but day two was 26 continuous, unbroken, mentally and physically exhausting hours. Thanks for looking!
Last edited by a moderator: 27 Jul 2019
A

Now just don’t add any Amano shrimp until the HC has grown in (if ever - the Amanos that is, they’ll look too big in this scape anyway )
C

Amano's were always my go to clean up crew with some otto's but I fear the same thing with the scale of this scape. Using small green neons as my fish. Not sure what to do about the algae crew... are there any new shrimp that clean like Amano's but are smaller?

And I learned my lesson about shrimp and HC a while ago, not until it's well rooted.
A

Tiger shrimp are one of my favorites but less available now it seems
Various Neocaridina, Caridina - just choose an active, healthy group

For BBA, the long nose shrimps (typically list as Caridina gracilirostris but various species may ship) but some report difficulty maintaining these in freshwater aquariums
I’m not convinced it’s an issue of freshwater, but rather inadequate/unsuitable diet, shipping damage/stress, environmental stress etc, though there are undoubtedly some species which are more particular about water parameters

If you’re not adverse to snails, pick up a mixed crew of Nerites, choose the smaller horned species as they seem much less prone to the (very difficult to remove) white-eggs-everywhere syndrome
Clithon corona are observed clearing out immature BBA (pretty much no one wants to eat the mature, stuff, bitter? BBA)
“Black helmet” (Nerite) snails seem to prefer cleaning rock/ glass more than plant stems (this may be more a function of their shell/body shape)

I’d not add any of the various SAE species as most will explore HC (for consumption? destruction?) and they grow too large and should really be kept as a shoal rather than a couple of individuals

I often add shrimp within a few days as they will then tidy up any melting leaves (before I even notice the melt) but some worry about soil moving ...
A

Assuming you mean Microdevario kubotai - there are at least 2 species shipping as such, one is significantly smaller

You are certainly meticulous
C

alto said:
Assuming you mean Microdevario kubotai - there are at least 2 species shipping as such, one is significantly smaller

Actually I just meant regular green neon tetras (neons without the red and smaller), but those are a cool option. I want something small that schools well and doesn’t contrast off green so much. I must admit I don’t know my fish.

nice
I like how the rock placement works together almost centered path. Often compositions alike are very static,but you have nailed the dynamics.
A

I really enjoyed reading this, I can’t wait for all the growth! I’m not a massive fan of Iwagumi but I like how it’s split through the centre making it into more of a river bed/valley, my eye is drawn straight down the centre which I kinda like! very nice mate
C

Thanks everyone, that’s what I was going for with the river ending before the back; I wanted a nice river through the middle but I didn’t want to break the HC down the middle.
C

Finally got some shots with a proper white balance, my iPhone XS Max washes the photos out in blue quite badly. I messed up the back left corner when my water change vacuum burped water because I decided I wanted to do a water change drunk, not hung over in the morning ha! (celebrating engagement, don't drink and scape people). Managed to fix the slope and add some more soil, replant everything and some more extras I had in the fridge, the area is recovering nicely and everything is beginning to spread.

So I've never had a tank start so easily, and I think I came up with a new technique for starting a planted tank without getting diatoms etc. Instead of a 50% WC every day for the first week, I did 50% WC in the AM before the light, AND PM after the light (8 hour photoperiod, will move it up to 10 eventually). I also put a carbon pad in my filter along with the purigen; soon it will be spent/exhausted and will just act as biological media - its only absorbing things in the beginning when you need it to, especially with how much AS I used (not the first time I've had success with charcoal in filter during cycle). Here ya go:

With the cabinet in view: 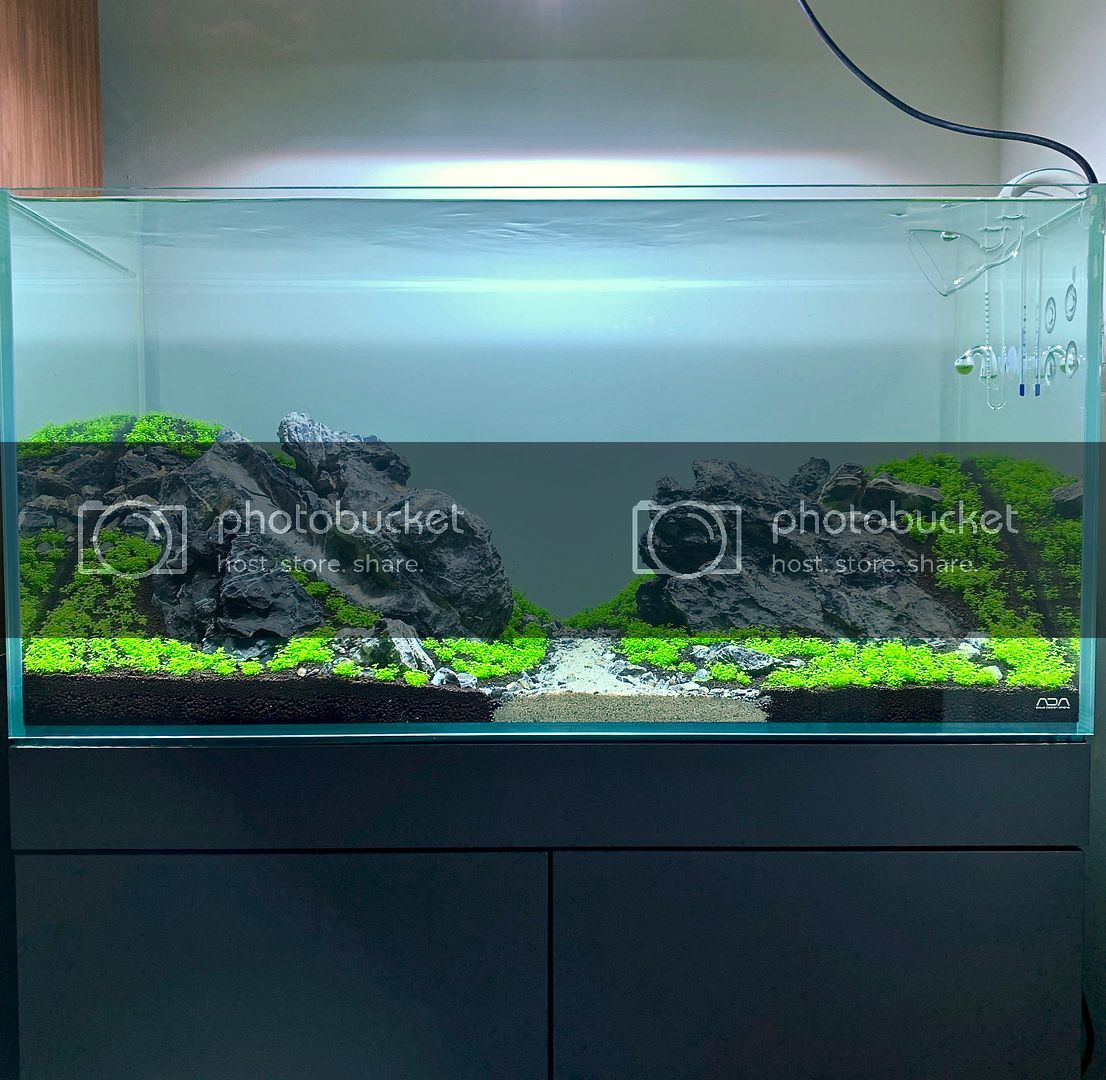 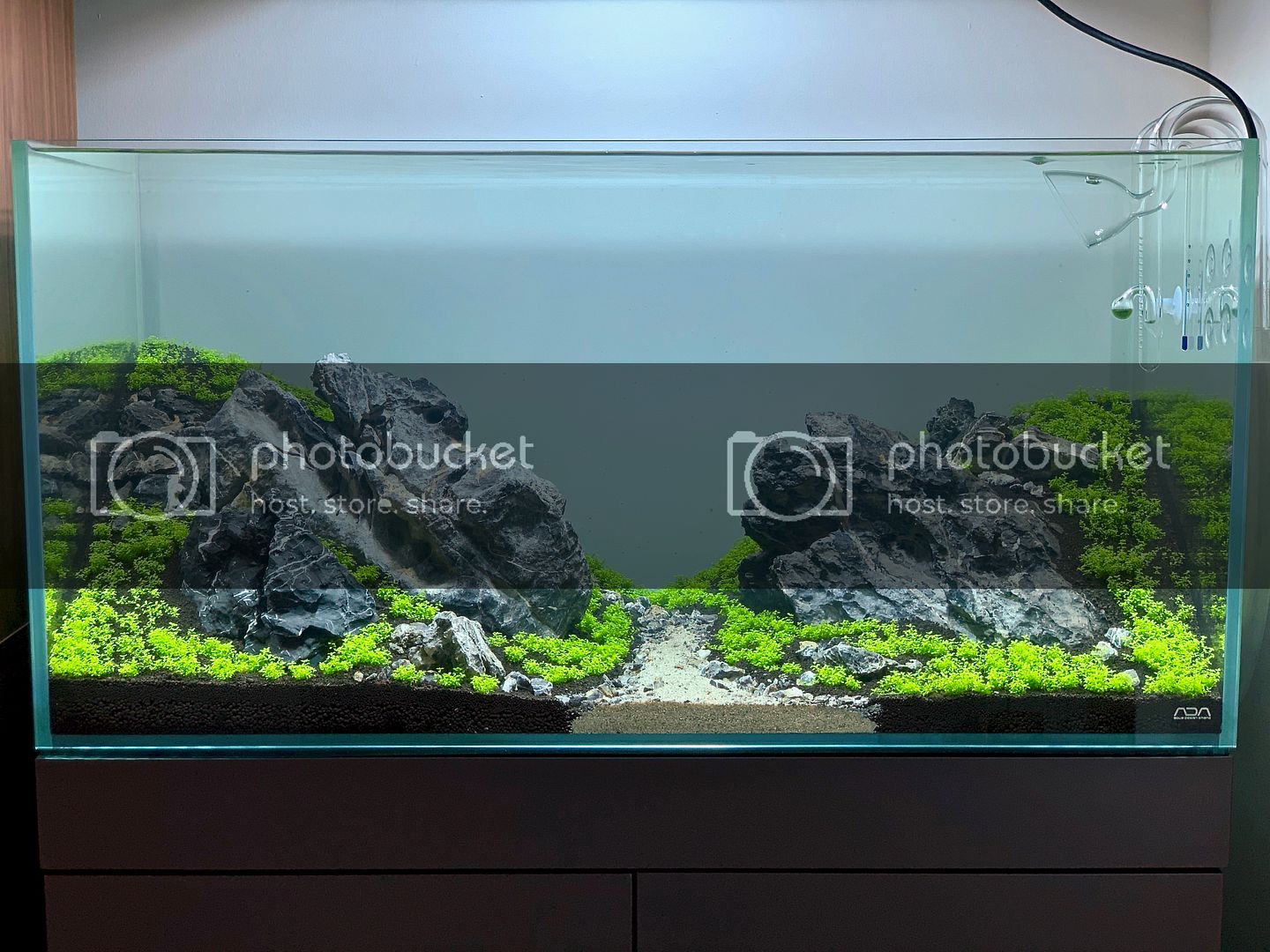 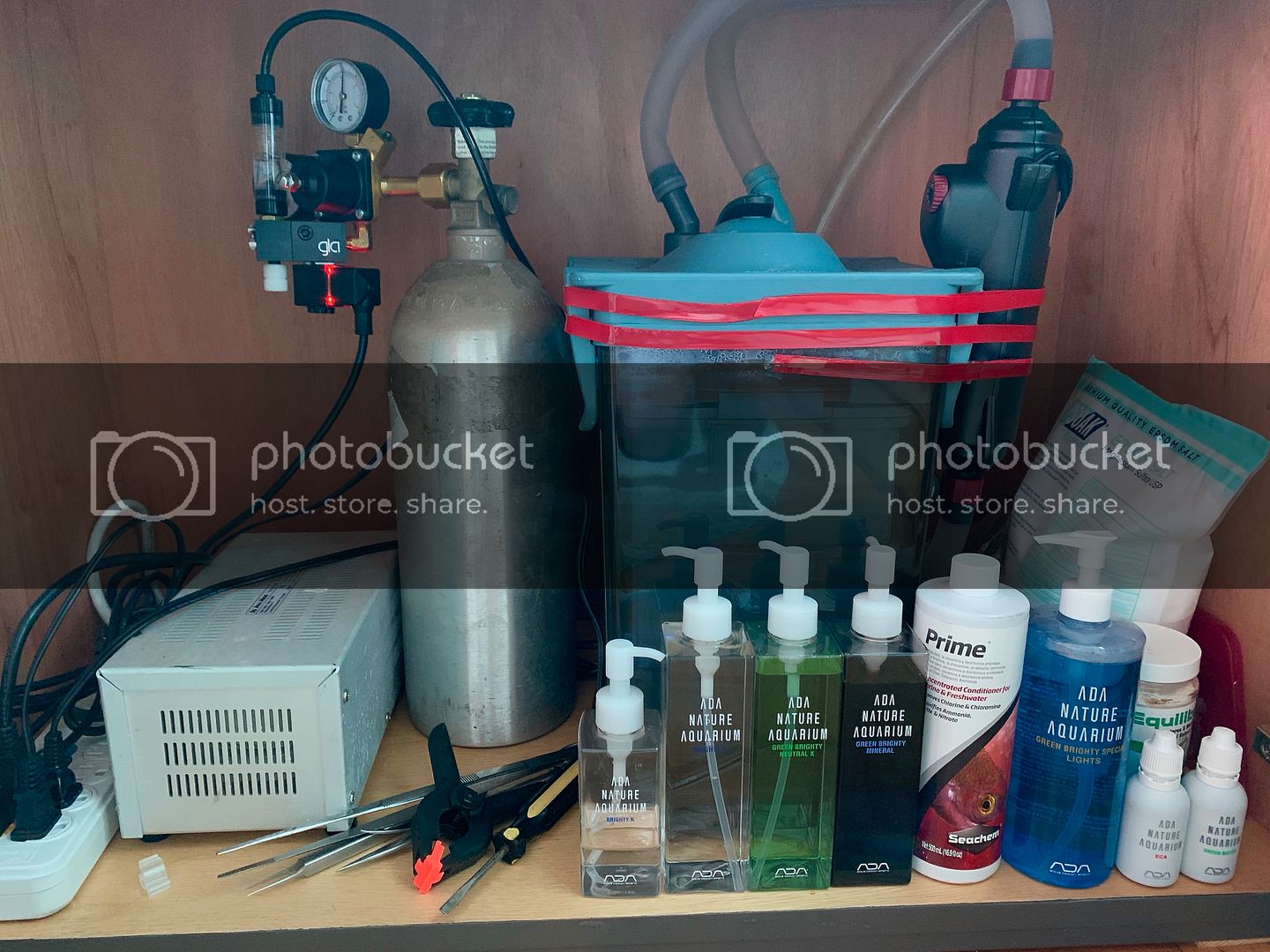 Filling in insanely fast... not even at the 2 week mark, ammonia on decline, nitrites through the roof. 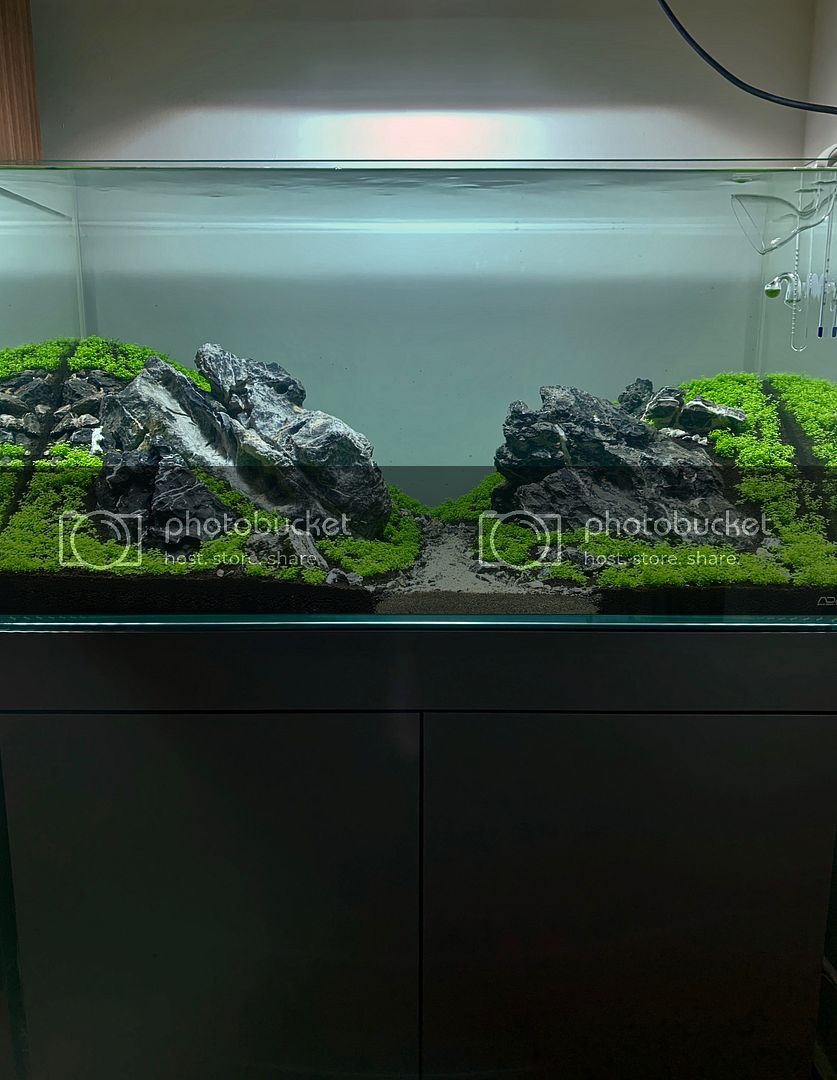 Here are pictures from day 20, not even 3 weeks in. I'm speechless from the growth. And no it's 100% not Monte Carlo, unless I no longer know what my favorite plant looks like and 2 seperate plant culture dealers both messed up and sent me monte? No way. It's super tiny, and 100% HC, but it's growing like monte. Please excuse the bits of orange bacter in the sand that still haven't dissolved lol.

it's looking like the HC from the back will start to drape over the two main rocks. I did not intend this, I won't claim credit, but god damn is it going to look good having HC flowing down over the rocks from the back. 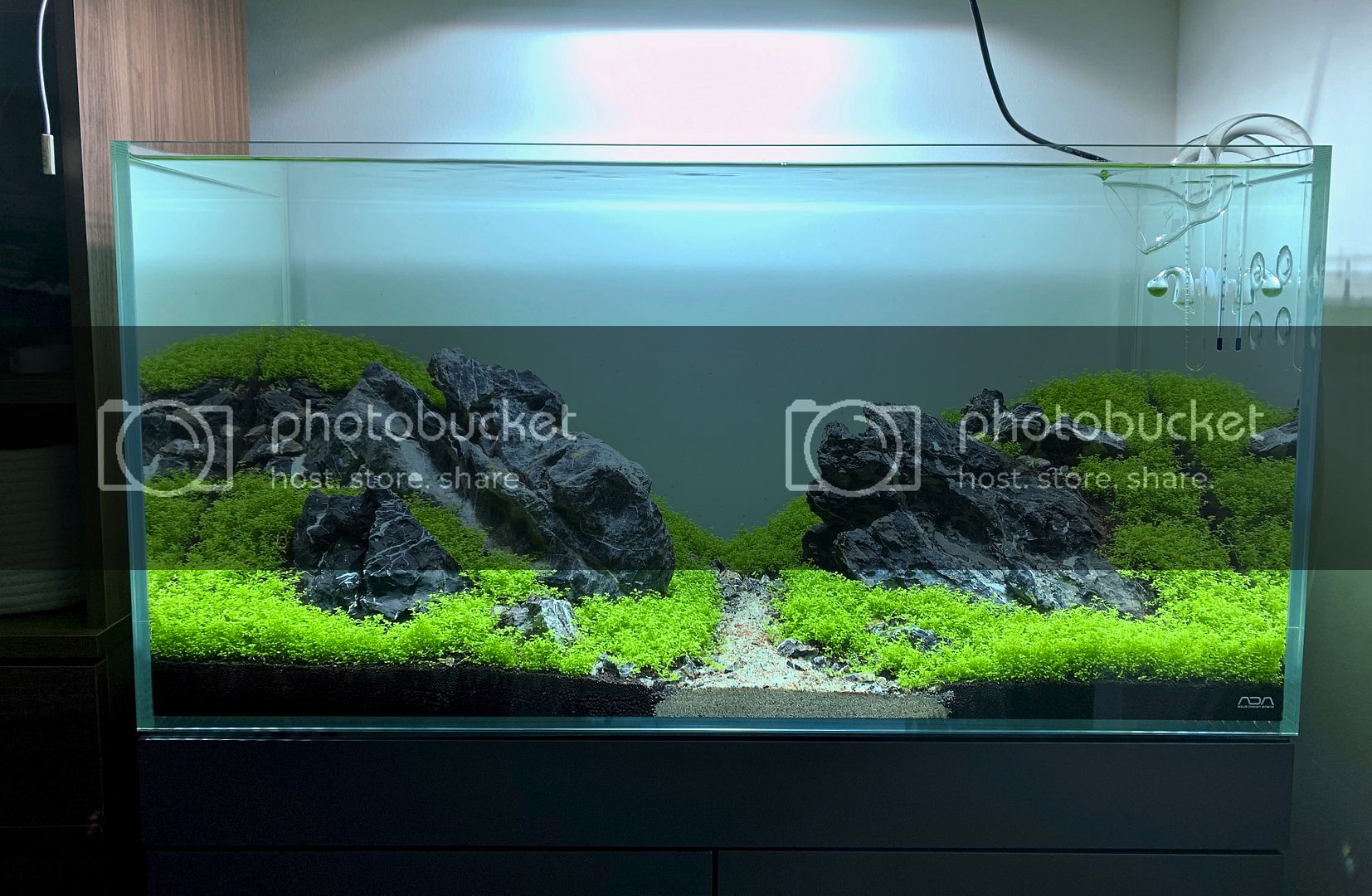 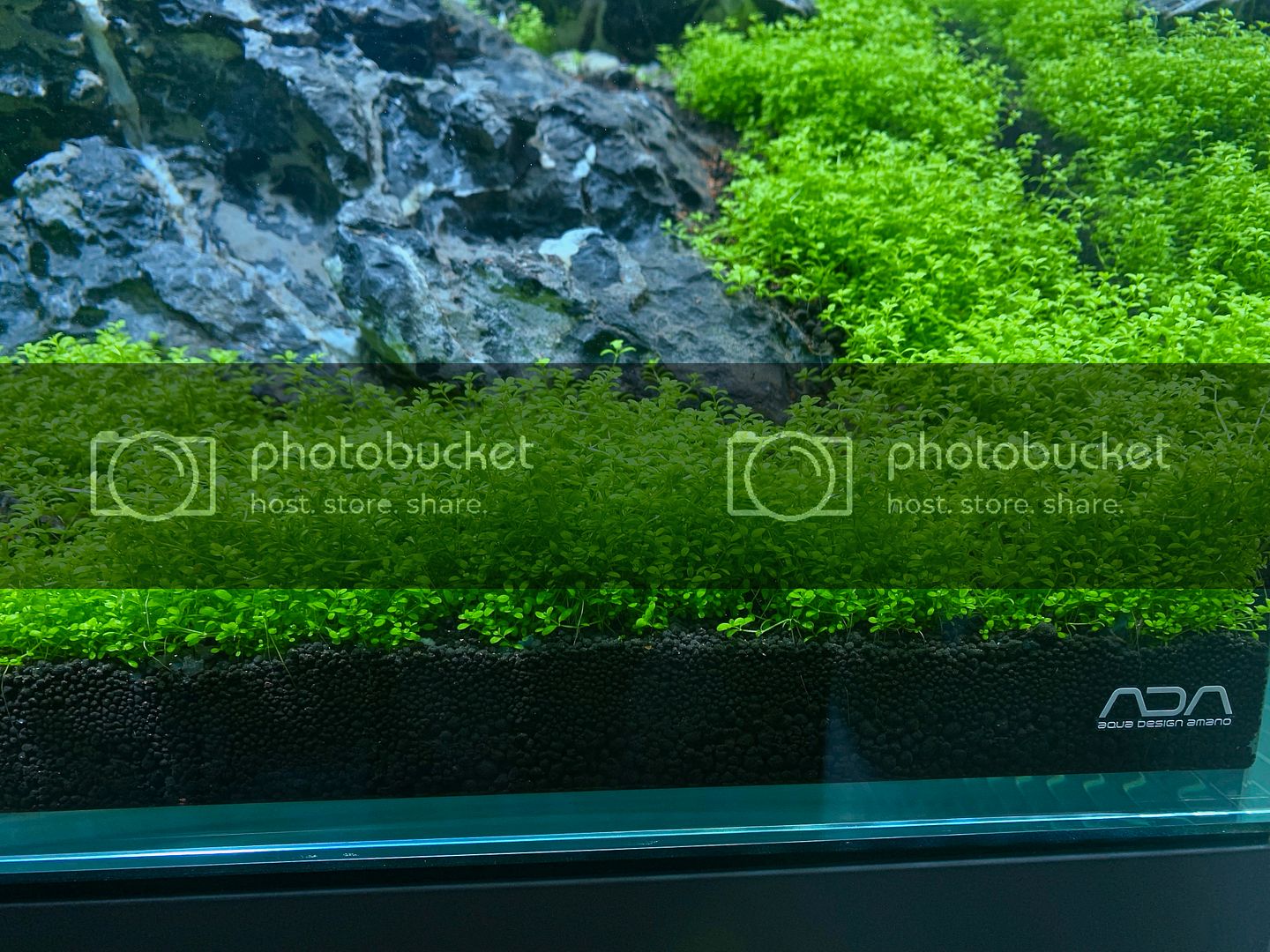 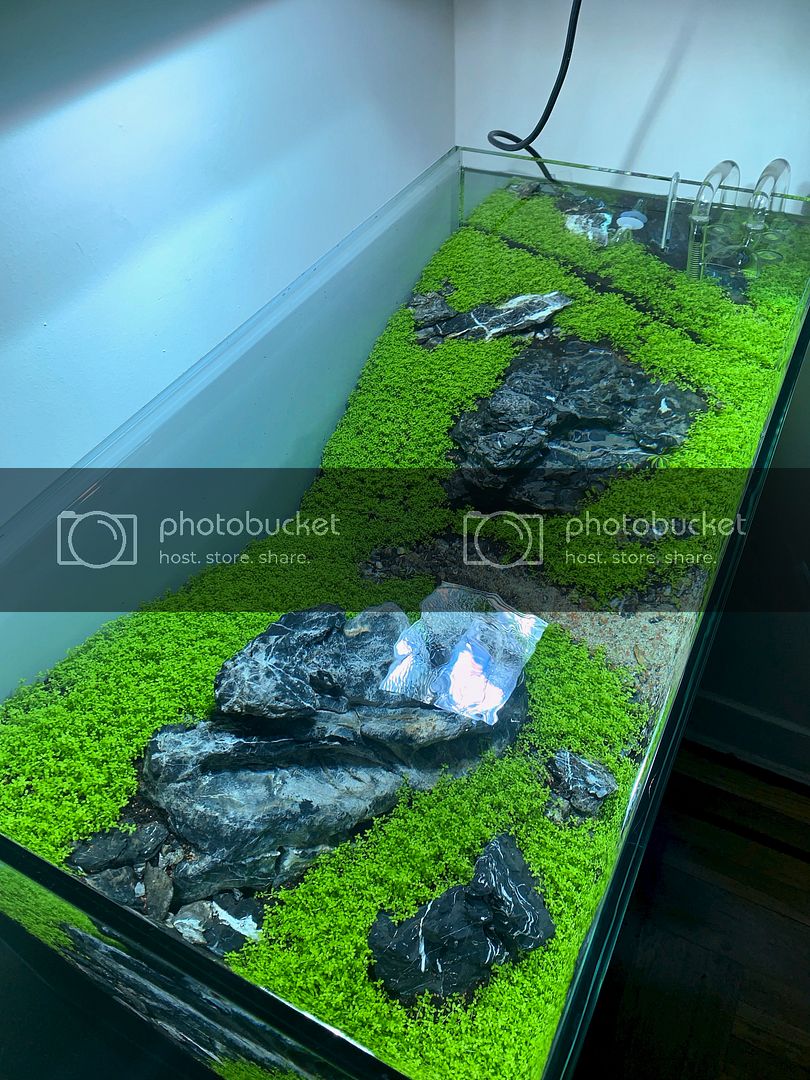 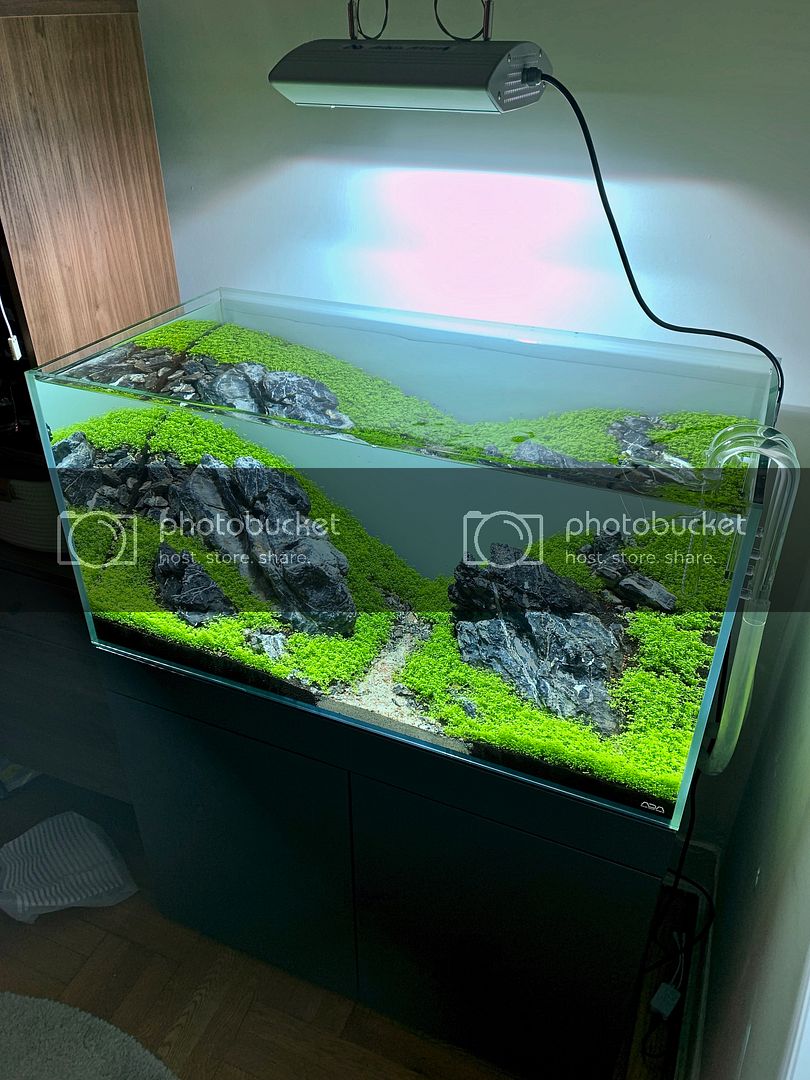 Ordering Green Neons for a small schooling fish and some blue contrast. Any recommendations on school size? originally I was thinking large, like 60, but I'm thinking too large a school might det5ract from the simplicity. Someone who knows fish better than I do please chime in, I'm not a fish guy.

red - aqualog photo short, these fish are slightly longer than the blue and green forms but still very slender, they seem to be much less frequently available on Farm Lists, they are stunning in planted aquaria, again strong iridescence underlies the red color

All the Sundadanio look stunning in just ambient light, as they still “shine”

As you may’ve guessed I’d source a mixed group of all 3, aiming to add ~ 20 of each variant

For P simulans, make sure imported fish are actually simulans and not the P innesi ‘green’ (slightly larger, different swim pattern, lesser color impact) - I’d do a shoal of at least 40, and up to 60, depending on source (will they be quarantined etc before purchase or will you get a ‘bag lot’ price (in which case, you may observe more losses but also significantly lower cost, depending on shop)

Are you considering other livestock as well?
A shoal of Pygmy Corydoras looks stunning in an Iwagumi
Just Aquascaping “Next”

Yeah that he needs a trim or its gunna lift

Tank got its first haircut today at day 21. Came out well, going to need to hit it aggressively again soon to keep it flat. It was planted so densely it was in it's own way and could not spread along the ground. So while it may be puffy the roots are still extremely vital. Many repetitive trimmings probably each week will be needed to get it flat like I want it.

After a 7 hour photoperiod post trim (down from 8 for the day) the HC really became much tighter and closer to the dirt. I'll let it root further for a week and then take it down even farther. It's not well rooted enough to take it any farther than this, any time I try the sprig starts to exit the aquasoil.

I ended up with more than a softball worth of HC trimmings! 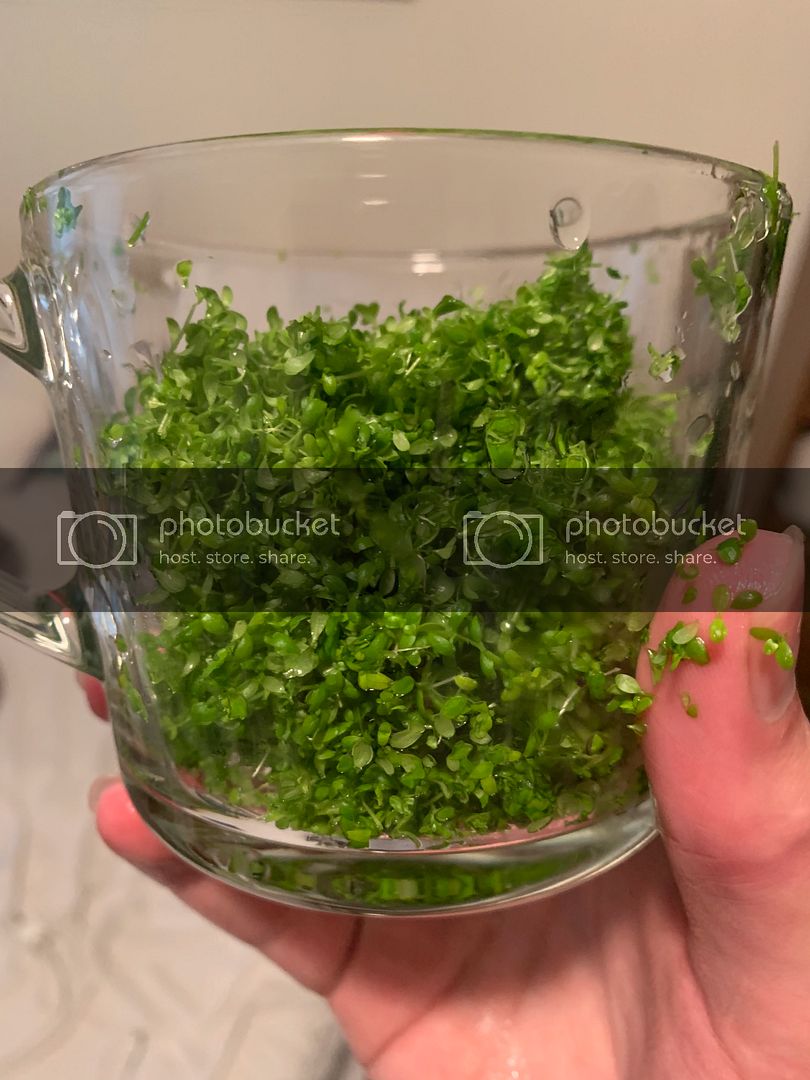 Here it is about an hour post trim, took 55 minutes of bending over it was not fun. 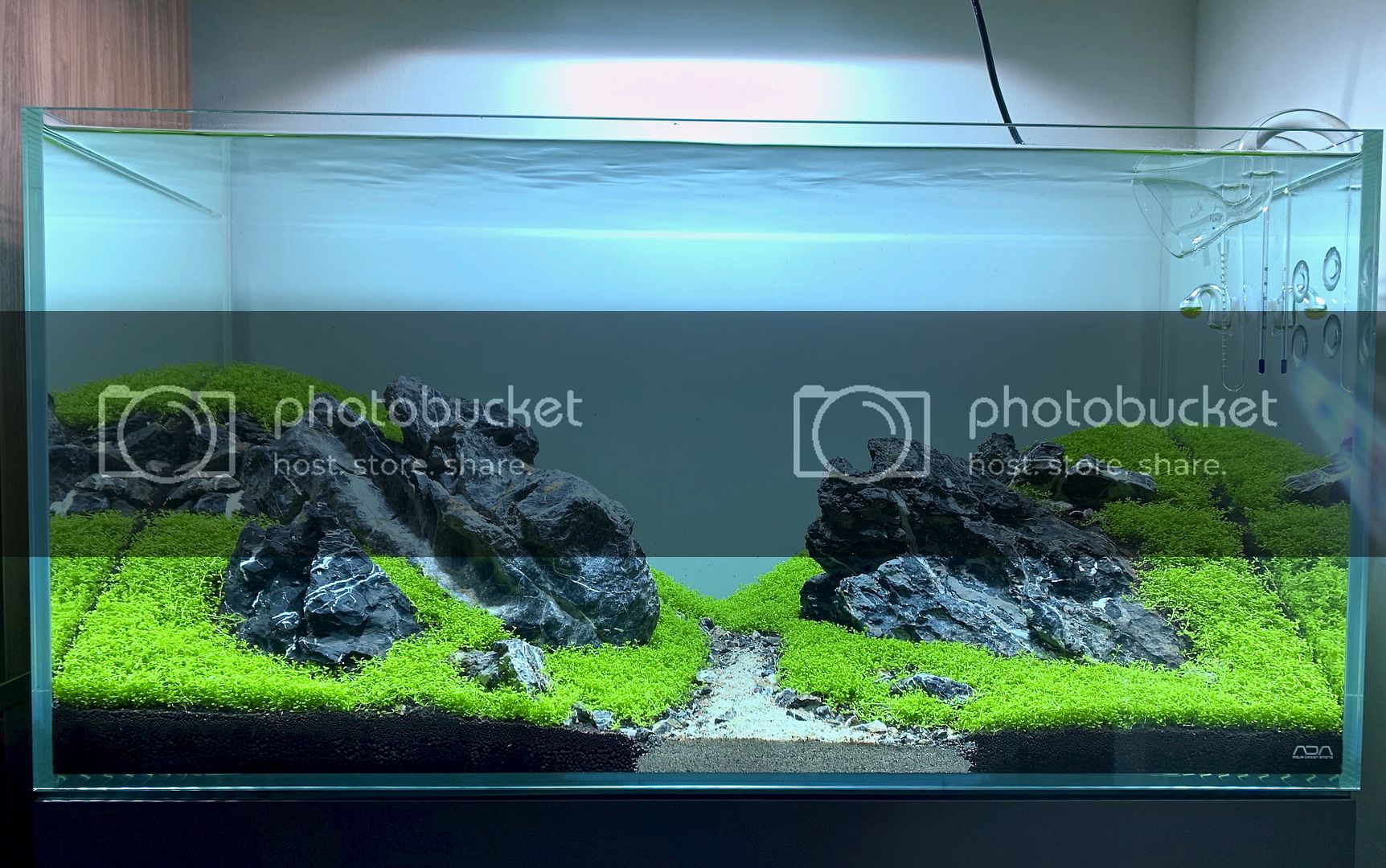 crazy, at my lfs they’re priced only slightly higher than (wild caught) green neons (which I believe are actually higher individual cost on Farm Lists, but ship better)
You must log in or register to reply here.
Similar threads