Just thought I'd share some (poor quality) pics of my gold corys. I love these little guys and think their colouring is fantastic, they change from week to week as well,sometimes the golden colour is so vibrant they almost look like they've been dyed yellow. I love the variation as well, some of them are really light others are very dark, you'll also notice some of them are alot larger then the others, the larger ones are wild caught wheras I'm pretty sure the smaller ones may have been tank bred. 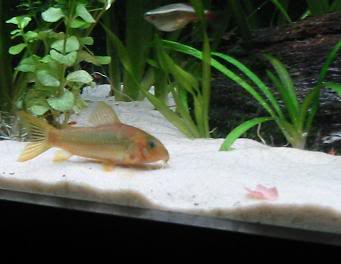 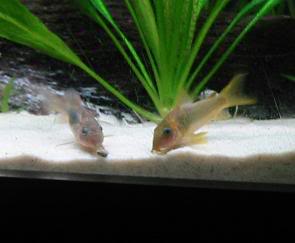 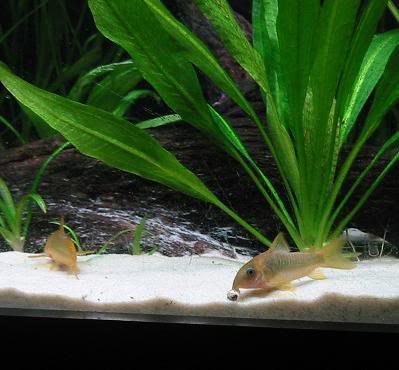 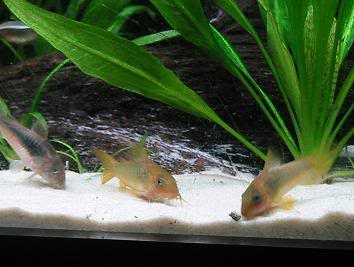 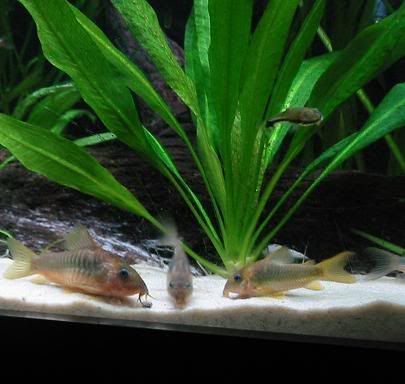 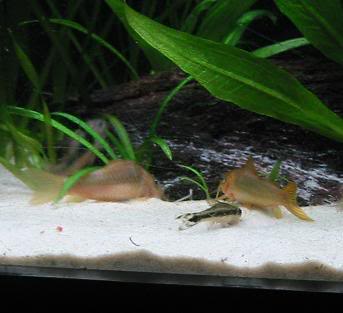 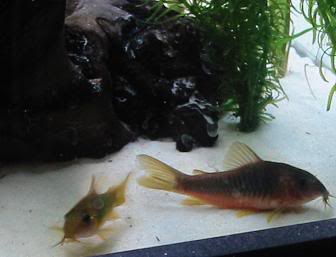 nice Corys. Nice clean substrate for them too. Im fond of the little blighters myself.

You may find that the larger corys may in fact be females and the smaller ones the males.
I found this out recently whilst watching my tank. When you see the corys rolling about the tank together, followed by the females clutching the eggs in her lower fins and depositing them around the tank. What a great sight. At first i thought that i was mistaken, but they seem to do it every fortnight, regular as clockwork. Only trouble is its usually the day before the waterchange. arrrggh.

Good look with your cories. let me know how you get on. Nice fish, btw.

Thanks for the comments

I have done a few vids of the golds in the past, because it's so difficult to get decent pics of them esp. with my camera, may be worth a look if you want to see the difference in size more clearly;


I'm pretty sure the 2 smaller are just smaller for whatever reason(I got them with a seocnhand tank so can't be sure of their origin). One of them is definately a female and the other a male that's why I named them mickey & malory. The 3 larger ones are definately wild caught, at least that's what I was told by the shop and I trust them as it's a good branch of maidenhead aquatics.

From what I've read this particular cory can be somewhat difficult to breed, not impossible, just difficult. My bronze corys(some of which are in the pictures) breed on a regular basis, usually every week(I often film them when they do this) but I don't remove the eggs anymore I had great difficulty re-homing the fry I raised the 1 time I did remove the eggs, don't want to have to do that again. One of the smaller gold corys often joins in when the spawning takes place, at least he joins in the chase and I have seen him nudging the female bronze, not quite the T-position but he's certainly 'aroused' by the whole situation.

Funny that you say it's the day before the waterchange that your corys spawn, usually it's the day of the waterchange as the cooler water usually triggers them to spawn. If I remember correctly a good way to condition corys for breeding is to feed them well with live foods(such as bloodworm, blackworms, tubifex etc) don't water change for a couple of weeks to allow nitrates to build then do a large cool water change and that mimicks the rainy season in the wild.